A lot of people would agree that it’s challenging to find reputable Roman Rottweiler breeders simply because these pups were not as popular as the standard-sized Rotties.

In the past, Rotts were also known as Butcher’s dogs, which is one of the reasons why they got a bad reputation.

It took years until they were finally recognized as good family pets, which they indeed are.

These pups rarely show any signs of hostility against their owners, especially if they live in families with children.

Therefore, if you’re looking for a family dog, search no more – continue reading this article and find a suitable breeder of these adorable giants!

If you’ve been searching for a Rottweiler pup, I’m sure you’ve come across the sign, “Giant Rottweiler puppies for sale” at least once.

Many people aren’t aware of the fact that Roman Rottweilers are nothing but “Giant” canines that can be found in many Rott breeders in the U.S.

These pups do originate from Rome just as much as German Rotties! Actually, it’s believed that the breed, in general, was created in ancient Rome as a mix of Roman Cattle dogs with other breeds.

Therefore, if you’re looking to buy a bigger version of the standard Rott, check out this list of reputable Roman Rottweiler breeders in the United States: 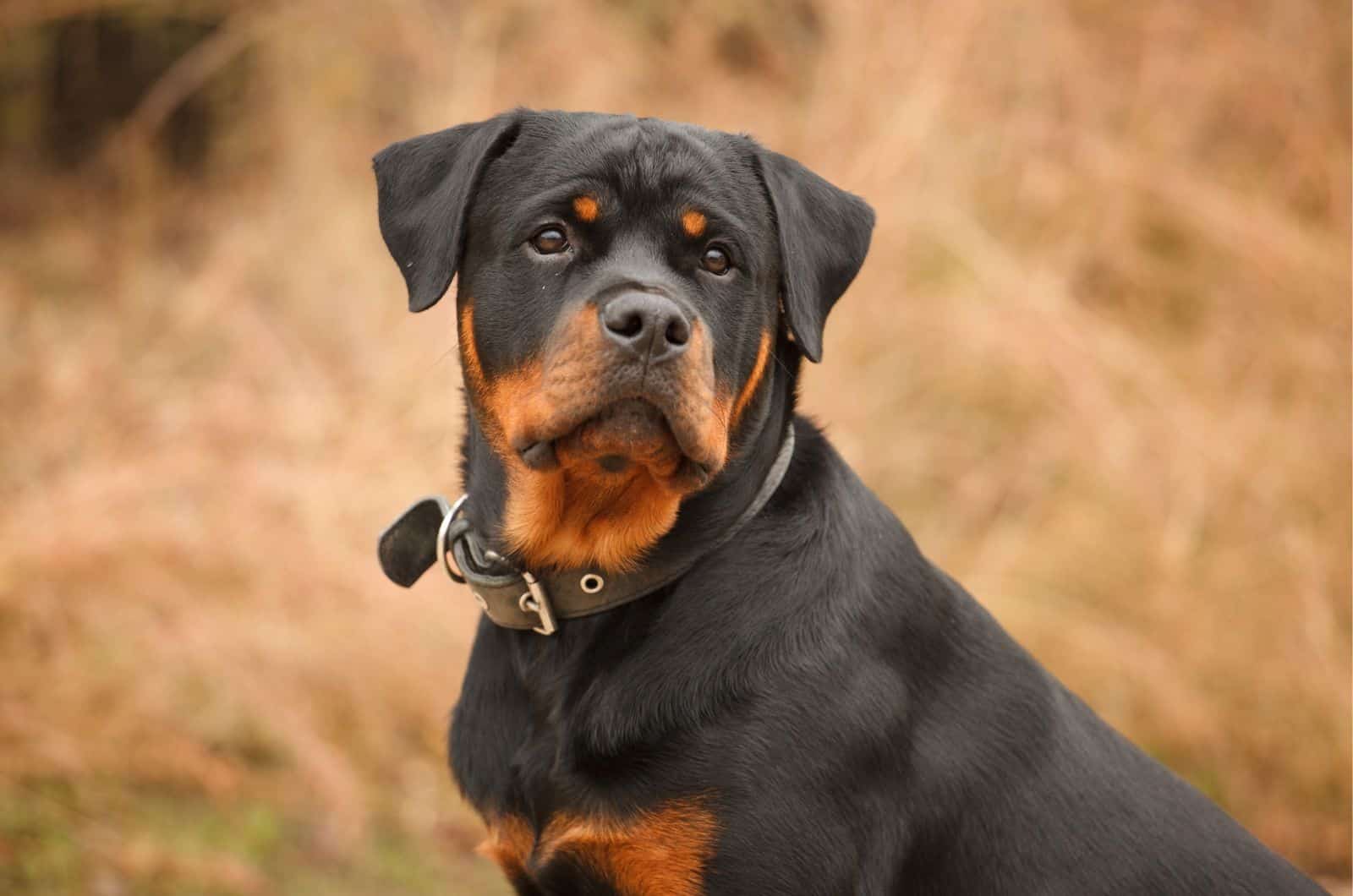 This is one of the small-scale breeders that is dedicated to the production of top-quality Rotts in the United States.

It’s a breeding kennel that is run by the whole family, who has been in love with the breed for years, which is why they decided to breed them and share their passion with other Rottweiler enthusiasts.

Each Rottweiler puppy from this breeding program is produced with great care. Every litter comes from selected parents that are thoroughly tested to ensure that all puppies are entirely healthy and free of any genetic conditions.

The owner of the kennel has written a lot about the history of Rottweilers on their website, where they mentioned the theory about this breed being produced from the Roman cattle canine. It is believed that all Rotts are descendants of the ancient cattle breed.

However, the breed was developed further in different countries, which is why today, we have German Rotts as well, and they were recognized by the International Club for Leonbergers and Rottweiler Dogs at the end of the 1800s.

Later on, The Allgemeiner Deutscher Rottweiler Klub (ADRK) began work and became one of the most famous Rott clubs in the world.

Because of the rising popularity of German Rottweilers, Roman Rotts became less known, but the fact that there are still Roman Rottweiler breeders in the U.S. like this one proves that this breed isn’t forgotten.

The price of the Roman Rottweiler puppies isn’t stated on the breeder’s website. However, if you take the average cost among other reputable breeders of this canine type, you’ll probably pay around $1000.

This is a great opportunity considering that the price of Rottweilers can go up to $2,500.

The price includes microchipping, vaccination, registration with the American Kennel Club (AKC), and other necessary documentation.

A deposit is also required prior to purchasing puppies, even though the price isn’t specified on their website.

When it comes to shipping, it is available, but expenses are provided by the client, not the breeder. The average price of shipping is $350, although this varies according to the equipment you’d like included.

Make sure to contact the breeder before the purchase in order to find out all the details regarding the procedure. 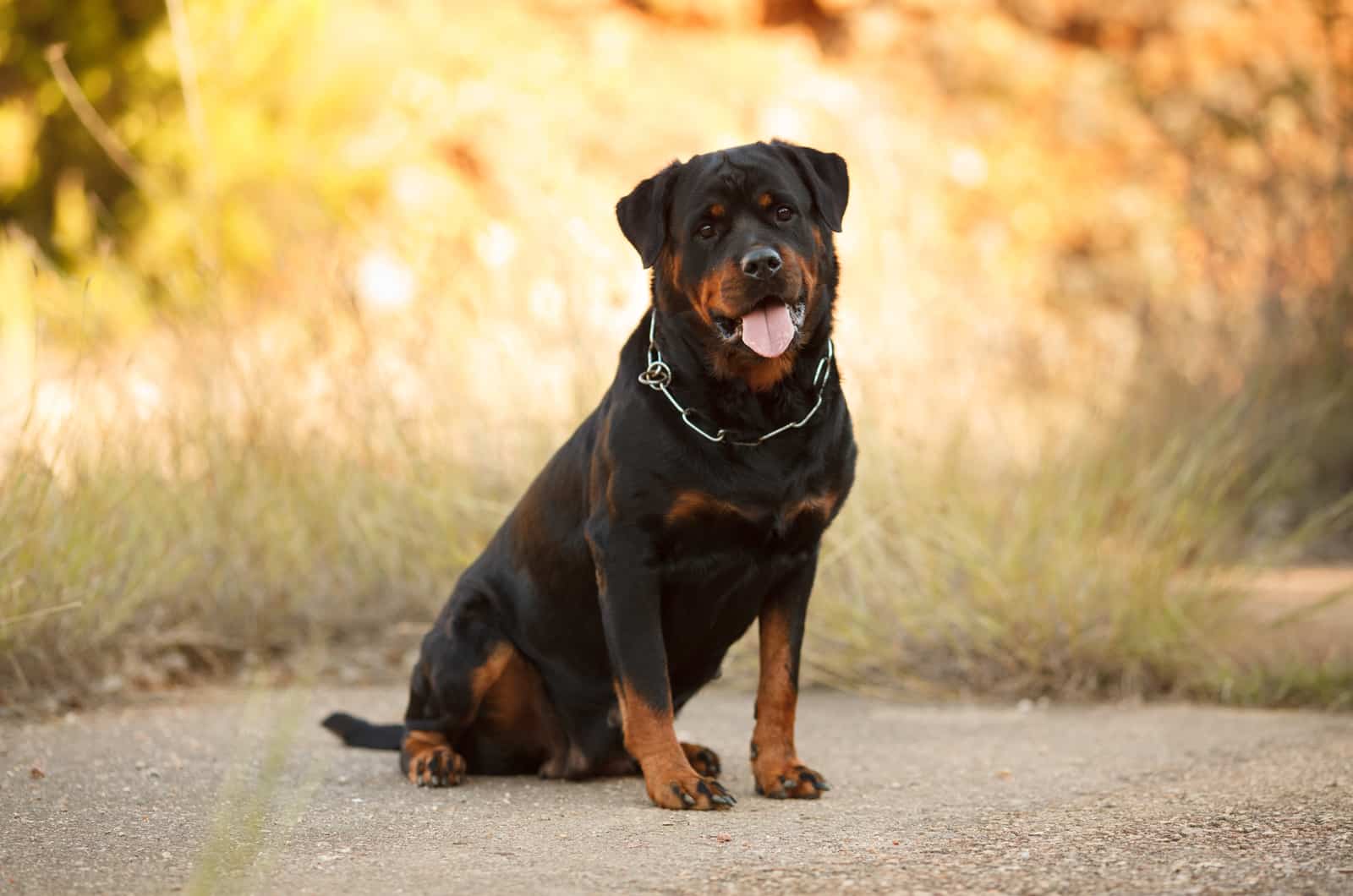 Family-run breeding programs have become quite popular among dog lovers as trustworthy breeders of purebred canines.

King Rottweilers are considered to be one of the best German and Roman Rottweiler breeders in this state, which isn’t hard to believe considering that they breed their canines according to the standards of the AKC and the FCI.

The breeder is a part of the H.E.A.R.T. (Health, Education, Accountability, Responsibility, Tradition) program, which proves the quality of each puppy from their litters.

Rott puppies from King Rottweilers have a champion bloodline as their adult breeding dogs are World Sieger champs.

The breeder takes great care in producing Rotties of excellent health and solid temperament. They also enhance the traditional characteristics of Rottweilers as herding and guard dogs, but they also want to prove that Rotties are great with children.

Breeding Rottweilers is not just a business for this breeder, which is why they require all their potential clients to fill out an application form.

This way, the breeder will make sure that you’re a good fit for their Rotties, and that they’ll be safe and comfortable in their new environment.

Such a thorough purchasing procedure also helps future owners to ensure that they’re getting a high-quality canine from an ethical breeder rather than a puppy mill.

The price of the Roman Rottweilers from this breeder is $1,500 minimum (it can be higher depending on the genetic background).

Before you’re able to purchase a pup, you will also need to pay a deposit fee of $200.

In case you have any other questions, you can contact the breeder any time you want. 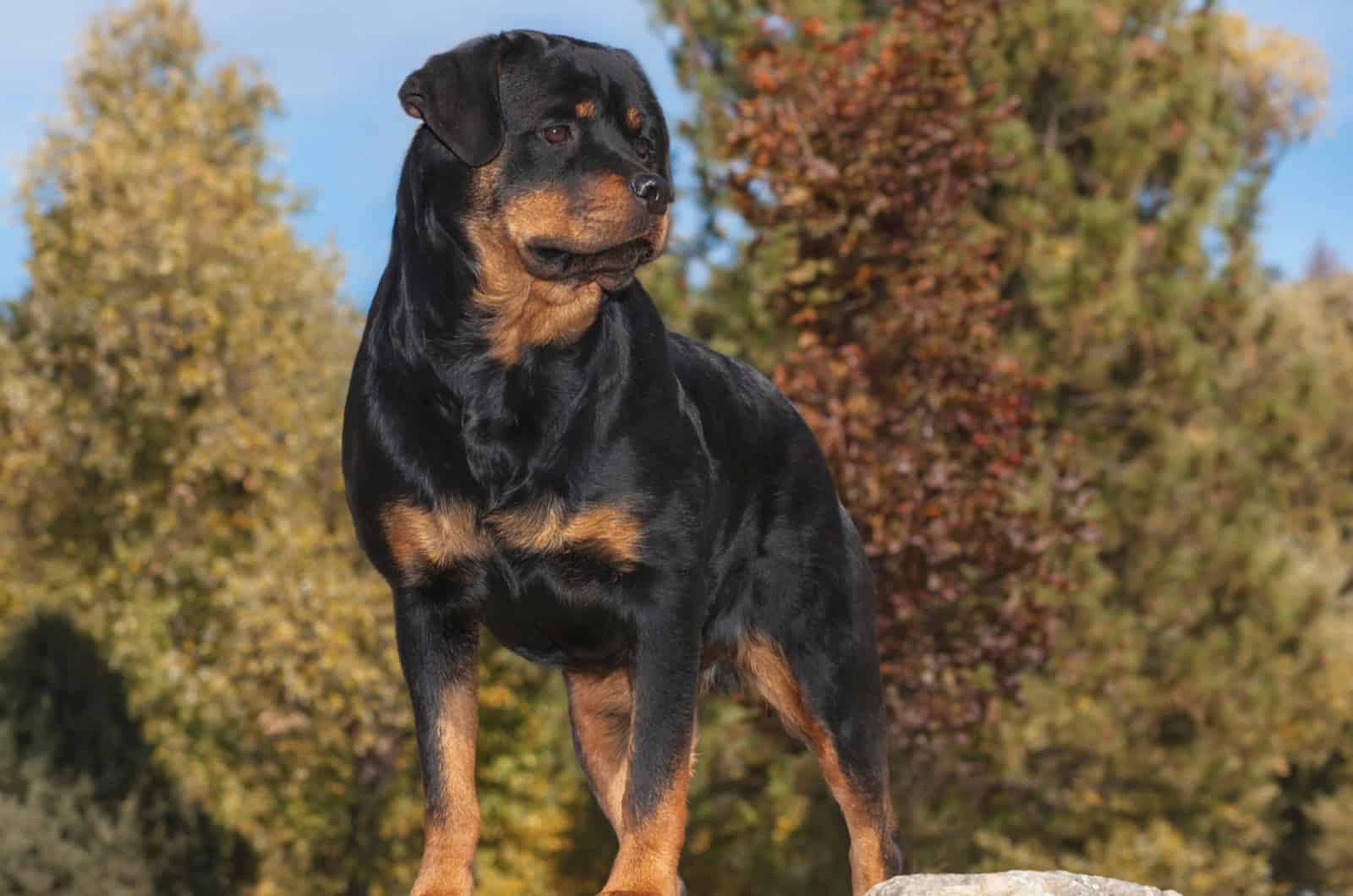 This is another family-owned business that is committed to breeding healthy Rott pups that comply with the Rottweiler breed standard approved by the AKC.

The owner of this breeding outfit wanted to make clear what the difference is between these two types by explaining it in detail on their website.

According to their description, Roman Rottweilers are also known as Giant Rottweilers simply because they’re bigger than standard Rotts, and also because they resemble the Mastiff breed more than German Rotties do.

READ NEXT: The 5 Best Mastiff Breeders In The UK

One of the main reasons why they produce this breed is the love they have for Rotts. They want to break the stigma around the Rottweiler breed by proving that they’re not aggressive as they’re thought to be.

The breeder claims that their puppies are of the highest quality, and that they make the best working dogs and family pets at the same time.

According to the tradition of the production of champion-bloodline pups, and the reviews from owners of their large dogs, it’s not difficult to believe that their canines are indeed among the best Rottweilers in this state.

It’s important to mention that this breeder doesn’t sell Rottweilers with a docked tail. Also, each puppy is raised by the whole family, which is an excellent socialization method that makes their Rotts suitable for families with children.

If you wish to get a puppy from Mississippi Rottweilers, there are a few conditions you’ll need to fulfill in order to do so.

First of all, you must complete their application form, which will help the breeder decide whether you’re a good fit for their puppies.

After that, you’ll need to make an advanced payment and sign a contract, which also includes the health guarantee provided by the breeder.

The deposit fee is usually around $300, and the purchasing fee will cost no less than $1,000 (this price can vary depending on the canine’s heritage and other conditions).

If you have any other questions regarding the purchase of a pup or the breed in general, feel free to contact King Rottweilers by their email provided below. 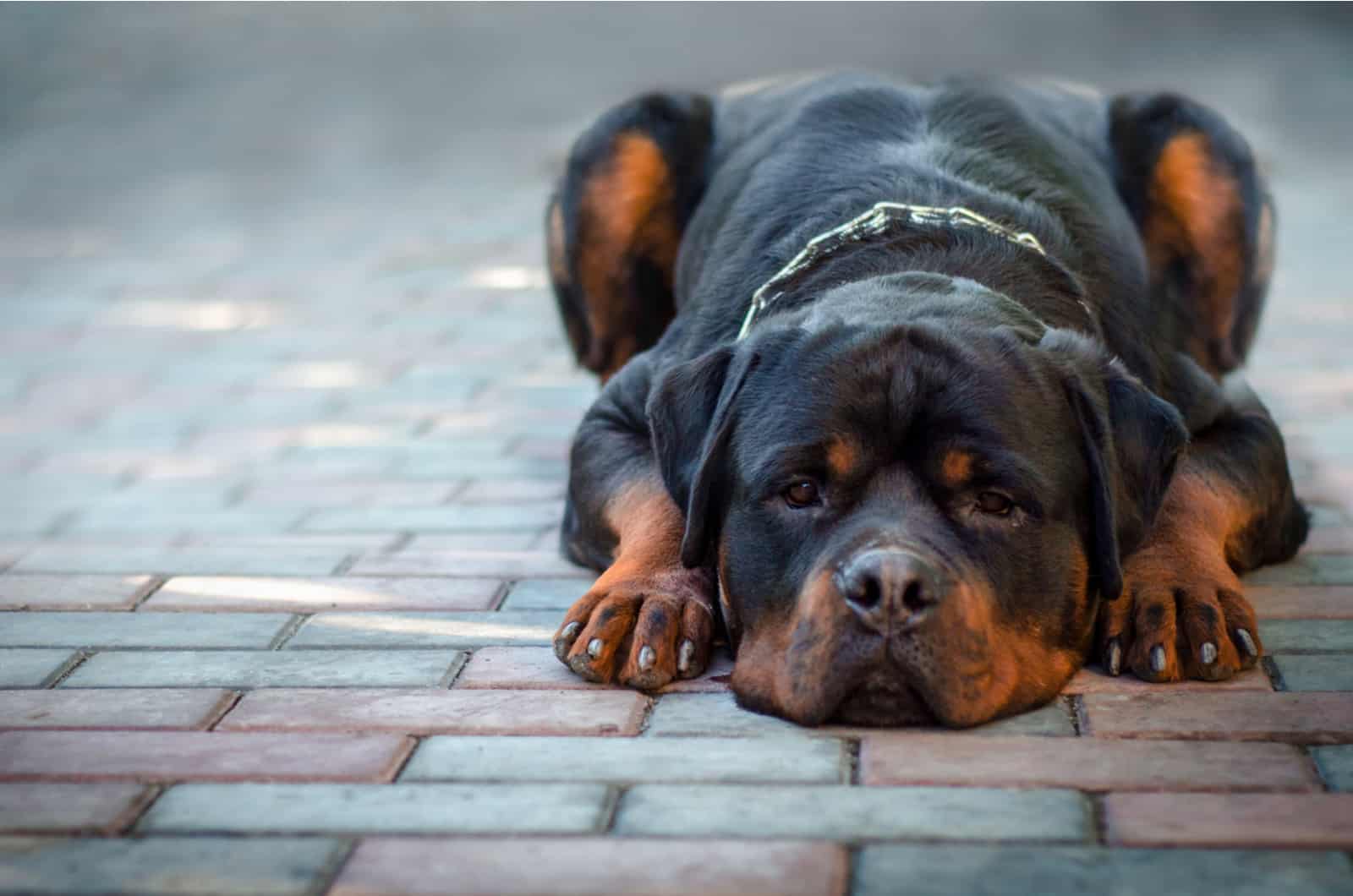 This is a small-scale breeding business that has been considered one of the most experienced Roman Rottweiler breeders in the United States.

As a code of ethics breeder, they make sure that each puppy from their litter comes from high-quality Serbian and German bloodlines.

The owner of this kennel has been in the business for more than 20 years, making sure that all of their Rotties possess excellent bone structure, solid temperament, and no genetic health issues.

They provide only the best-quality Rottweilers as family pets, police dogs, and service canines.

To prove these statements, the owner offers a two-year health guarantee as well as health certificates, including their confirmation record on vaccination and microchipping.

Also, all dogs at this breeding kennel have passed Schutzhund canine training, which ensures that the canines are ready for police and military forces.

Potential dog owners who are looking to purchase a European Rott dog breed from this breeder can contact the owner to check all the details regarding the purchasing process.

They do not breed or raise American Rottweilers.

The price of their Rottweiler pups isn’t specified on their website, but it can be requested via phone or email.

If you wish to make a reservation, you will have to make an advanced payment of $500, which is non-refundable. 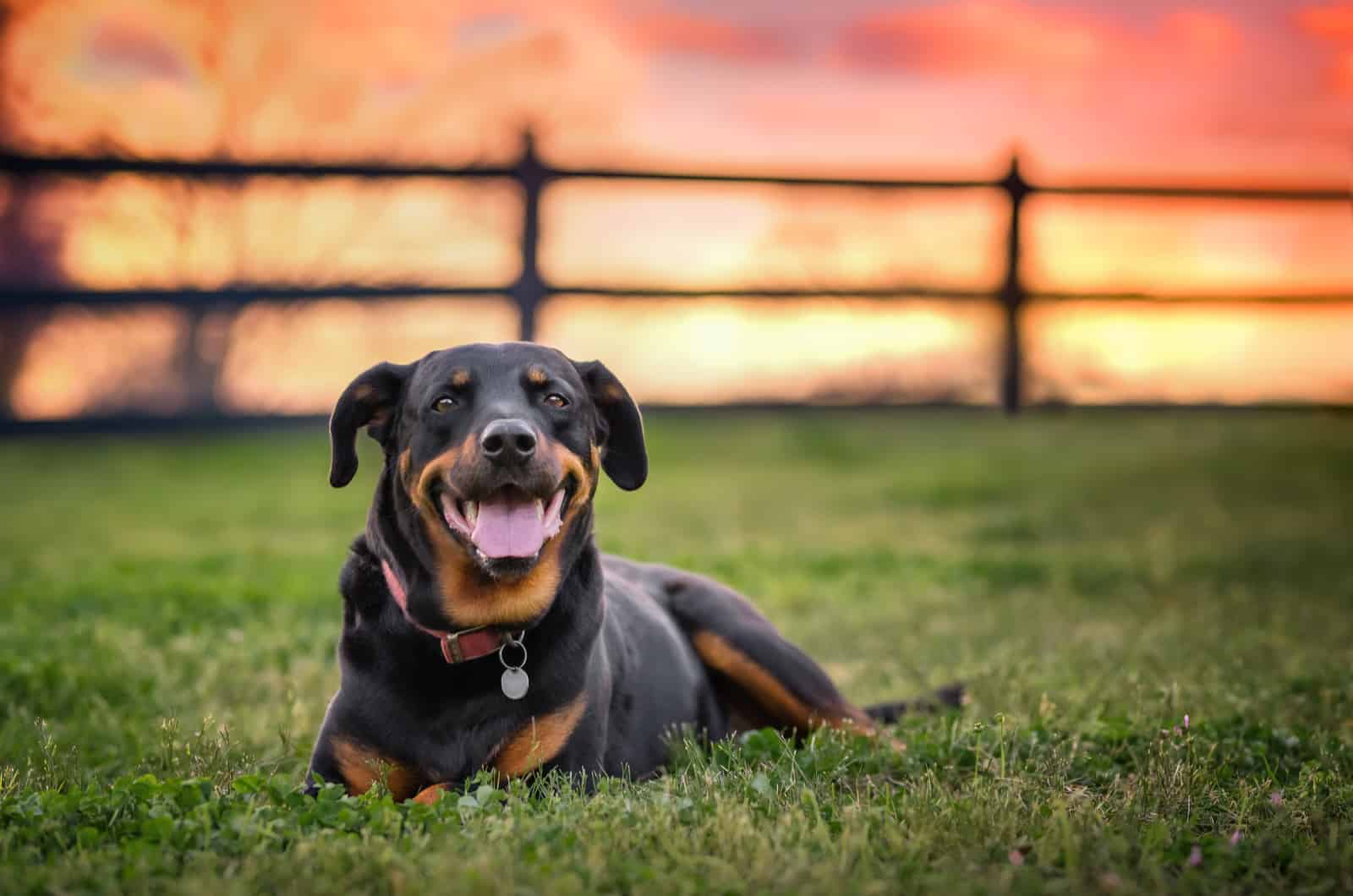 This is another Code of Ethics breeder that is devoted to the production of healthy and well-mannered Rotties in the United States.

The owner of this breeding program has been a part of the American Rottweiler Club, and the American Kennel Club for more than thirty years. They’re also silver members of the Breeder of Merit program founded by the AKC.

Their pups are descendants of Rottweilers that originate from Germany, which they believe is the purest type of Rottweiler on the market.

As members of the AKC and the ARC, it’s needless to say that the breeder has been breeding only top-quality canines from the first Rottweiler they produced.

Every adult male and female Rottie has been tested under the Orthopedic Foundation for Animals (OFA) standards to ensure that no puppy will have an increased risk of genetic conditions such as elbow and hip dysplasia, eye problems, cancer, and other illnesses.

According to the breeder’s statements on their official website, their Rotties have a longer lifespan than most Rottweilers that haven’t been through all the genetic and specific health tests.

There are several litters available for purchase at the moment, including the ones coming from male studs that are the ancestors of the famous Vom Haus Neubrand and Vom Brandauerweg breeds.

The price of these Rottweilers can range anywhere from $3,000 to $6,500 depending on the litter you choose.

You can get all other information directly from their website or from the breeder.

Roman Rottweiler breeders have become quite popular among giant canine lovers. Fortunately, there are plenty of places in the United States today that offer high-quality giant Rotts.

It’s crucial to find a responsible breeder who will provide all the necessary information about the canines they produce, along with their parent breeds, and tests on potential genetic health problems.

Roman Rottweilers generally have a shorter lifespan, just like other giant breeds including Dobermans, Cane Corsos, Great Danes, and other large dogs.

Therefore, make sure to provide your Roman or German Rottie with maximum comfort and love from the whole family; your pup will be grateful to you until the last day of its life!

One of the first steps to making them happy is getting delicious treats and dog food for your Rot, along with a comfortable collar and a high-quality brush.

Cane Corso Vs. Rottweiler – Which One Is The Better Guard Dog?