There are many great Cane Corso names out there, but we’re looking for a special one. It’s no simple task. We have to go through a bunch of standard, boring dog names to find the best of the best dog names for your new puppy.

Now, the Cane Corso is no Chihuahua or Retriever. This is a big dog, huge to be precise, with a big heart and even bigger needs. You’ve gotta act according to the dog’s needs. Watch your dog’s personality closely. Is he cheerful or serious? What does the Cane Corso breeder say? What’s his coat color? Black, maybe brindle?

There are numerous ways to find inspiration for naming your Cane Corso.

Today, we’re going to help you out by teaching you how to become the finest name giver of all time.

Your best friend deserves something special. Show him HE’S special!

What Is A Cane Corso? 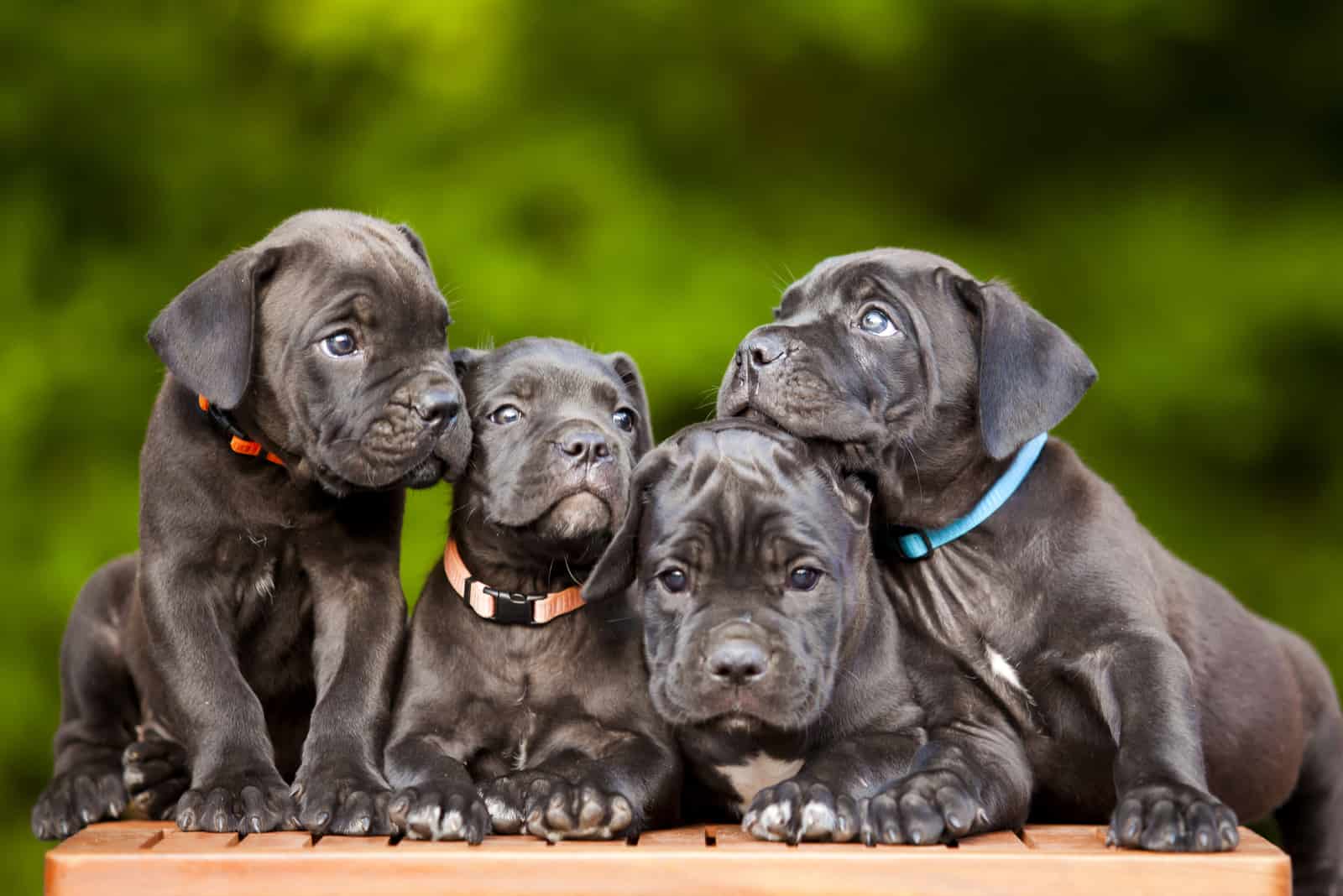 The Cane Corso is a large dog breed that can be traced back thousands of years. Their ancestors, Mollosers, were a mighty working breed named after an ancient Greek tribe, the Molossi.

After the Romans conquered ancient Greece, they brought back these dogs to today’s Italy. There, Mollosers were bred with native breeds to get Cane Corsos and Neapolitan Mastiffs. Fun fact: Cane Corsos were used as “pireferi,” the first military service dogs used in Roman warfare. They used to carry flaming buckets of oil on their backs to assist in attacking the enemy.

After the Roman Empire dissolved in the 5th century, this Italian breed was given somewhat less exciting jobs hunting wild boar, herding livestock, and guarding farms, which is why many think they’re an aggressive breed. They served successfully until the two world wars, economic crises, and other 20th century mishaps.

The breed almost became extinct, but thanks to a group of dog lovers in the 1970s, they made it through. By the 1990s, the Cane Corso dog breed made its way through Europe to the rest of the world. Sadly, the American Kennel Club (AKC) only recognized the Cane Corso breed just a few years ago, in 2010. They had to go a long way before an official organization said they’re purebred dogs.

If you’re thinking of adopting this gentle giant and making it a part of your family, you will need to pay around $1,800 to $3,000. The price is high, but their sweet, protective temperament is absolutely worth it. Expect to spend 10 to 12 loving years with your Cane Corso.

What Are Cane Corso Name Trends? 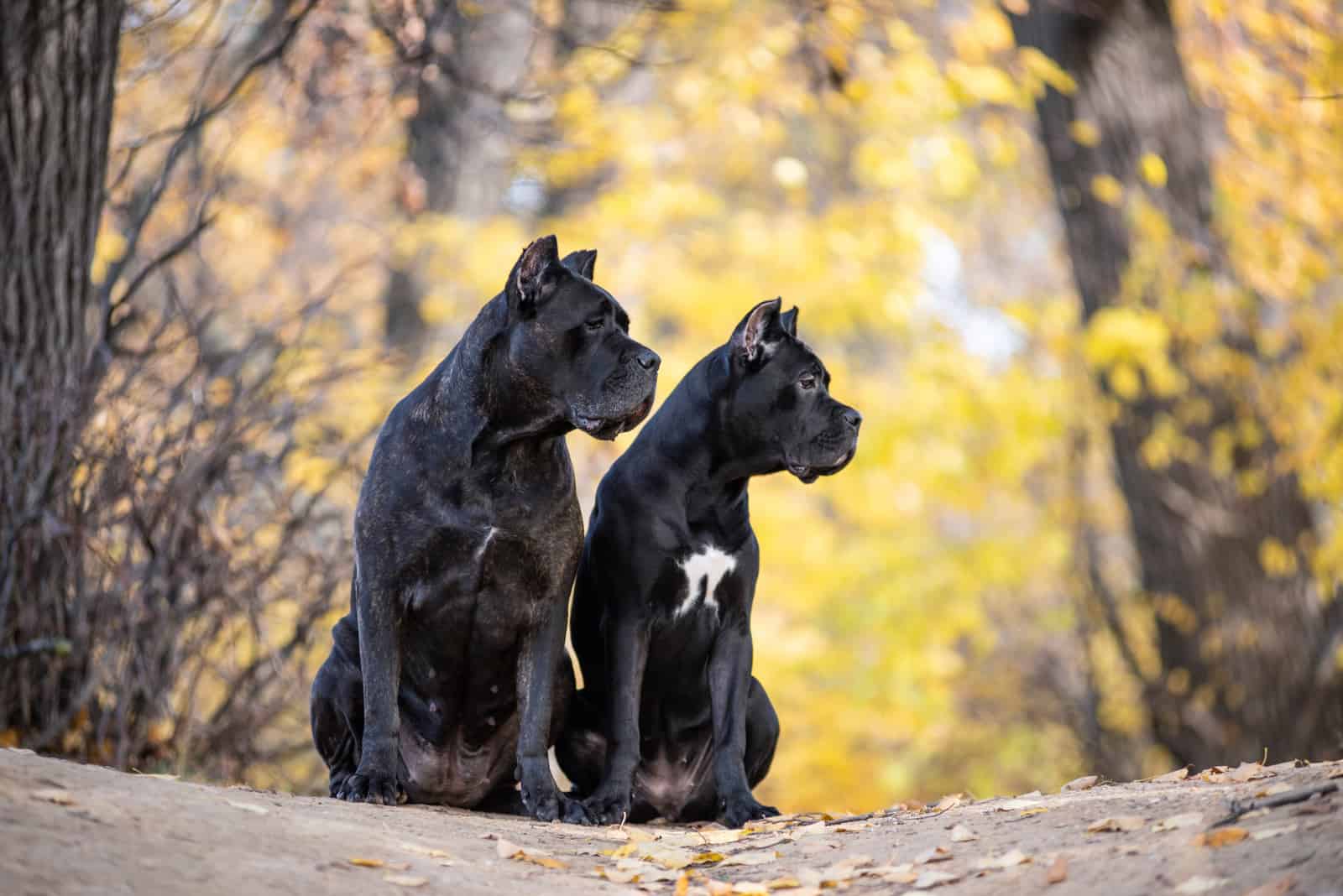 Majestic and powerful dog names are the coolest trend for Cane Corsos. You’ll see that numerous dog names on our list are inspired by power, strength, and dominance. Such names are, for example, King, Boss, Bear, etc.

Since Cane Corso is an ancient dog breed, it’s no wonder we have many ancient Greek and Roman names too. For example, Juno, Apollo, Zeus, Thor, Athena, Titan, and even Hercules. Giving your dog one of these names is a nice homage to their heritage.

A Word Of Advice…

The most important thing to keep in mind when choosing a Cane Corso puppy name is to find a name that rolls off the tongue. The best Cane Corso names are those that make you feel happy. But, how do you go about finding such a name? Well, the best way is to yell out every dog name off our list and check out how it sounds. It is a bit ridiculous, but how else will you know?

Why Is It Important To Choose A Good Dog Name? 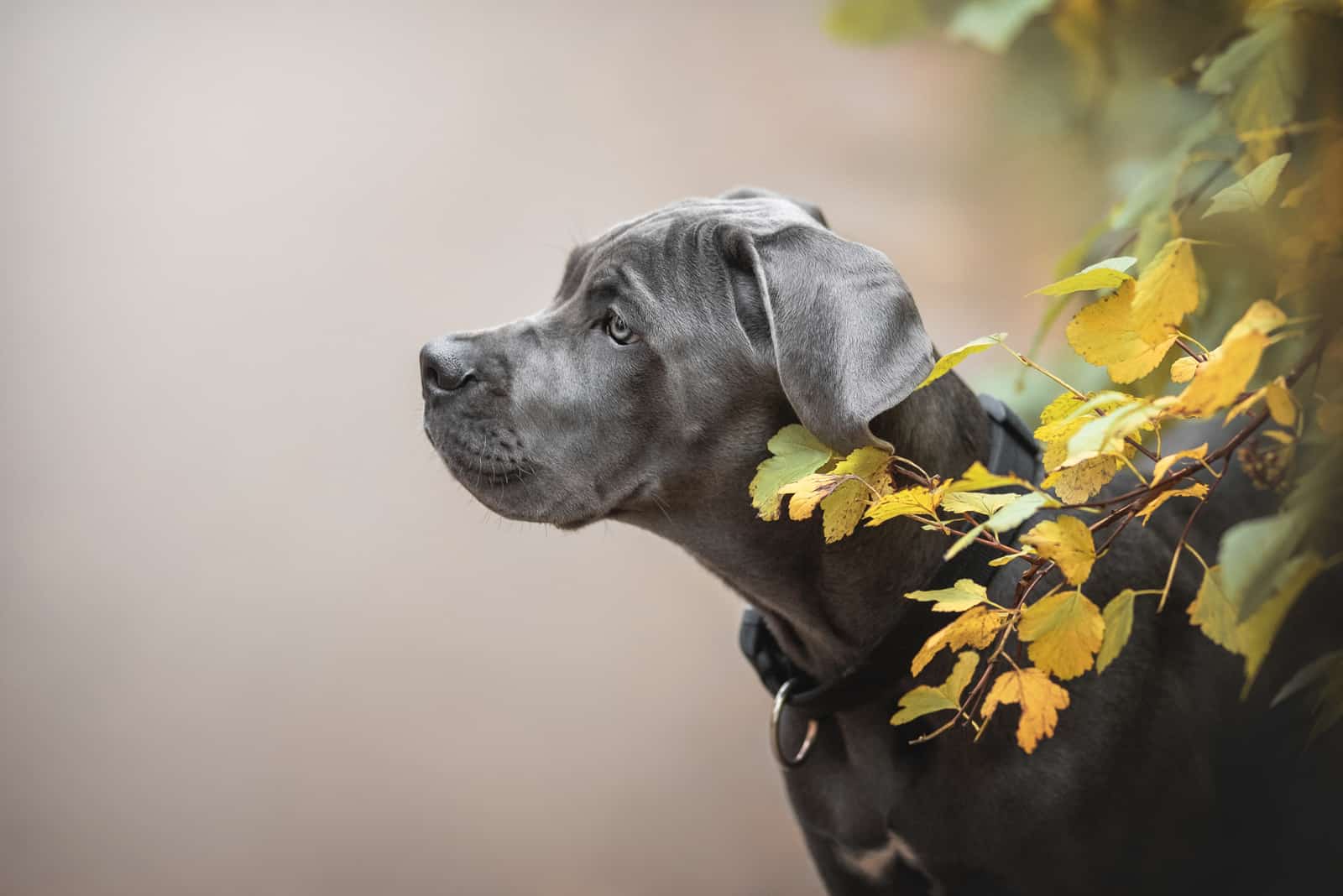 Every dog has a personality of its own. The important thing is to find a dog name that suits your pup’s personality.

Cane Corso dogs have a rough appearance. They’re dominant doggies, but their hearts are made of gold.

Cane Corsos are undoubtedly tough-looking dogs, even though they are generally big softies at heart!

However, naming your Cane Corso Sparkles or Snowball just sounds wrong, doesn’t it?

Inspiration for good Cane Corso puppy names can be found anywhere. Even the most unexpected sources can be inspirational.

Remember the name of your old street. What was your teacher’s name in the first grade? Did you see a cool grocery brand on the shelves? Maybe after your pup’s favorite dog food? Flowers, guns, sports, hunting, movies like Disney or even anime… You name it!

Seriously, anything can be an inspiration. Just exercise those brain cells and figure out one hella Cane Corso name!

Roman-Inspired Names For A Cane Corso 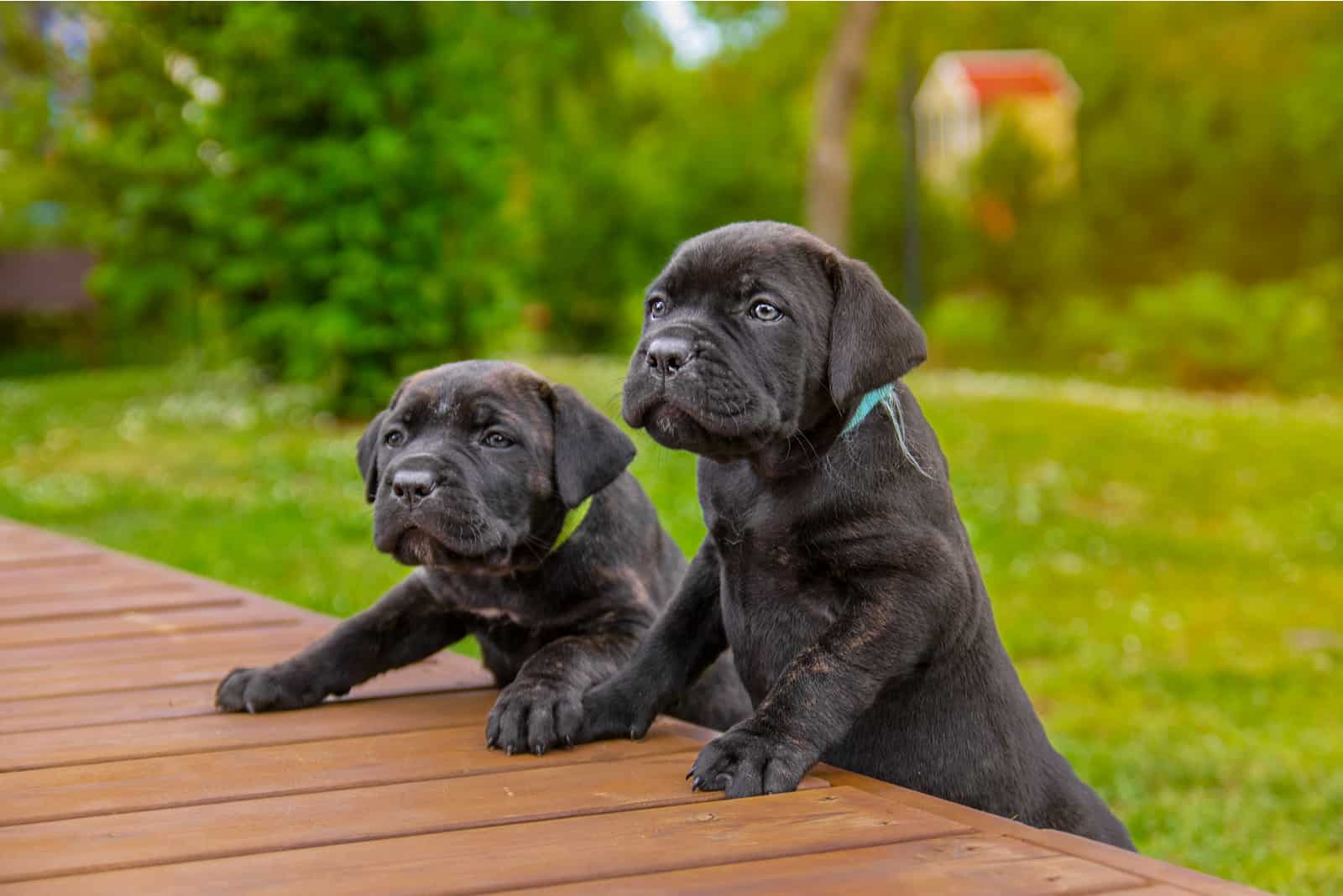 Rarely does any pooch have a Roman-inspired dog name. To honor their land of origin, we’ve figured out that giving unique Roman dog names for your Cane Corso would be simply… pawmazing! Check out these ancient ideas that still sound modern:

• Caesar: Although Cesar stands for “hairy,” we’d like to think Roman emperor Julius Caesar was the inspiration for one of the coolest Cane Corso names.

• Cohort: This was a Roman army unit. In fact, the Roman army hides many amazing ideas that will serve as great dog names.

• Crispus: The true meaning of the word “Crispus” is curly-haired. Well, Cane Corso dogs aren’t curly, but we can’t deny this dog name sounds sharp and hits right in the center.

• Ludi: Cane Corso dogs are true fighters of the canine world. What better idea than giving them a name that once stood for Roman games where gladiators had their battles?

• Nero: Nero stands for the color “black.” But, Nero is also that crazy Roman Emperor that burnt down Rome. A totally appropriate name idea for a Cane Corso.

• Omen: Did you know that Omen stands for a sign of the future? Well, now you know.

• Rufus: Even though Rufus is meant to describe red hair, it’s still a cool name choice for Cane Corso dogs.

• Sextus: Simply put, it means “the sixth,” but it sounds powerful.

And if you have a girl, you can try:

• Alba: Just like Albus, Alba stands for the color “white.”

• Drusa: Here’s a Roman family name that can be used as a cool dog name for female Cane Corso dogs.

• Juno: Juno was the Roman goddess of marriage and childbirth. It can also stand for the movie Juno.

• Porcia: Back in ancient times, the Cane Corso was used to catch wild boars and pigs, hence why the name Porcia (pronounced like the car, Porsche) is such a good Cane Corso name.

• Venus: Ahh, the Roman goddess of love and beauty! 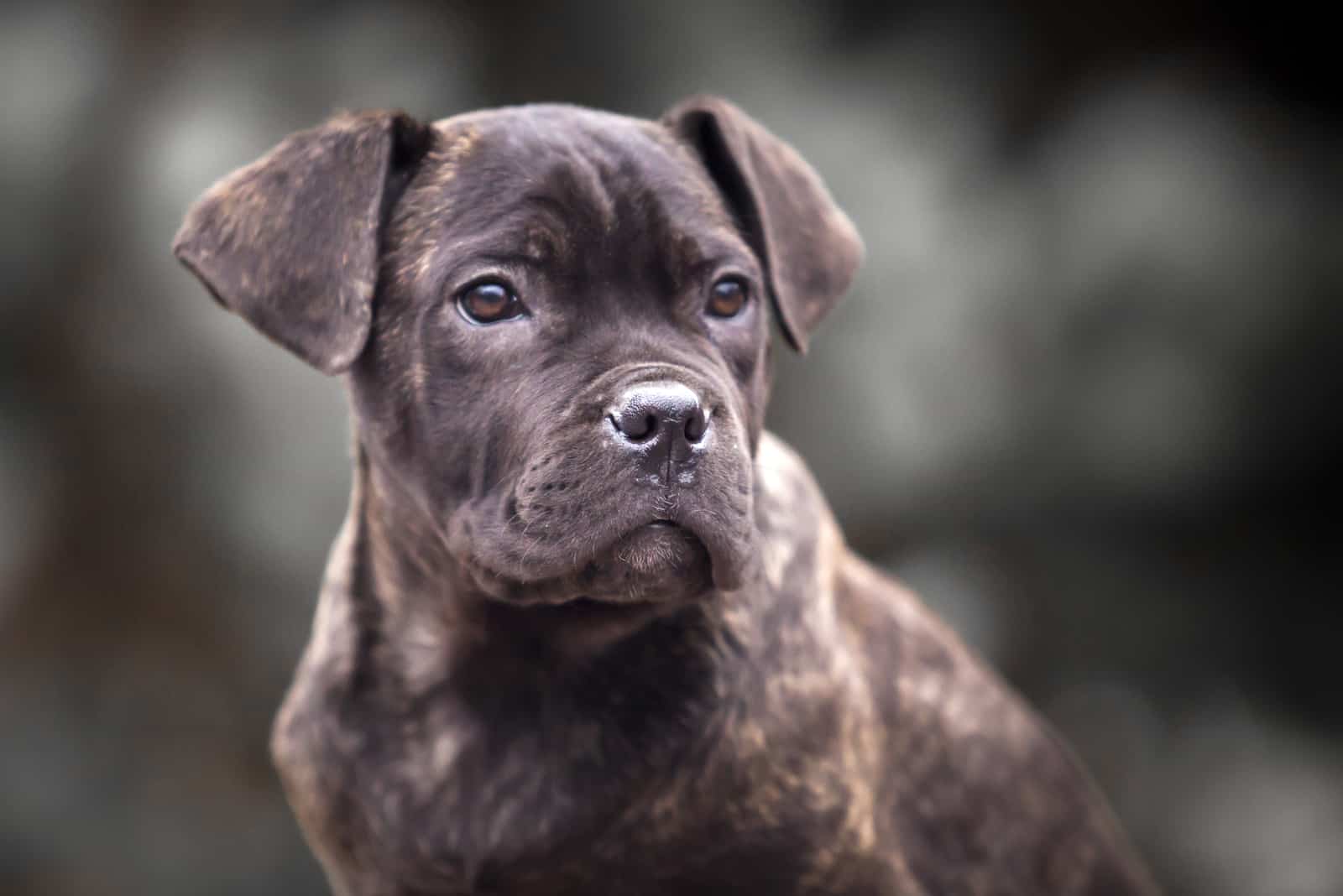 What is now Italy was once known as the Roman Empire. If none of the Roman-inspired names were cool enough for your Cane Corso, maybe you should try Italian names? Help your pooch get in touch with its roots!

• Dante: Well, isn’t this the perfect dog name for mischievous pups? We all know what Dante is famous for.

• Dino: Dino is also a nickname derived from Aldobrandino.

• Maso: We even have a name for a Cane Corso puppy that was once a twin or one of two puppies from one litter. It’s Tommaso or Maso, meaning “twin.”

• Naldo: All Italian names that end with “naldo” already have a moniker built in the name. It’s Naldo!

• Nico: Here’s Nico, short for Niccolo, a name that means “victor of the people.”

• Nino: Nino is a nickname for Gianino. In other words, it’s a name that means “God is gracious.”

• Orso: Well, we assume that at some point in the past, Cane Corso dogs used to hunt bears. And… Orso is bear in Latin, so… yeah, what a great name for a Cane Corso or Neapolitan Mastiff!

• Primo: Cane Corso is first in everything. No wonder they would suit a name like Primo, coming from the Latin word Primus!

• Santo: An Italian Italian form of the Latin word for holy is Santo. Santo is also a cool male dog name for Cane Corsos.

• Sesto: We see many Italian forms of Latin words. That’s because the Italian language was derived from the old Latin language. For example, the name Sesto means the sixth. What a great name for a puppy from a large litter.

• Terzo: For a puppy coming from a medium-sized litter, we suggest the name Terzo, meaning the third.

• Tino: Some Italian names have the same ending -tino. Tino stands for tiny, and it’s a terrific name for a tiny puppy like a Cane Corso weighing “only” 130ish pounds!

• Vanni: Vanni is a short but lovely form of the name Giovanni, meaning God is gracious.

• Vico: Choose Vico, as Vincenzo (the conqueror), for a Cane Corso that conquered your heart.

•Vito: Just like Vita, Vito stands for Vitus or “life.” 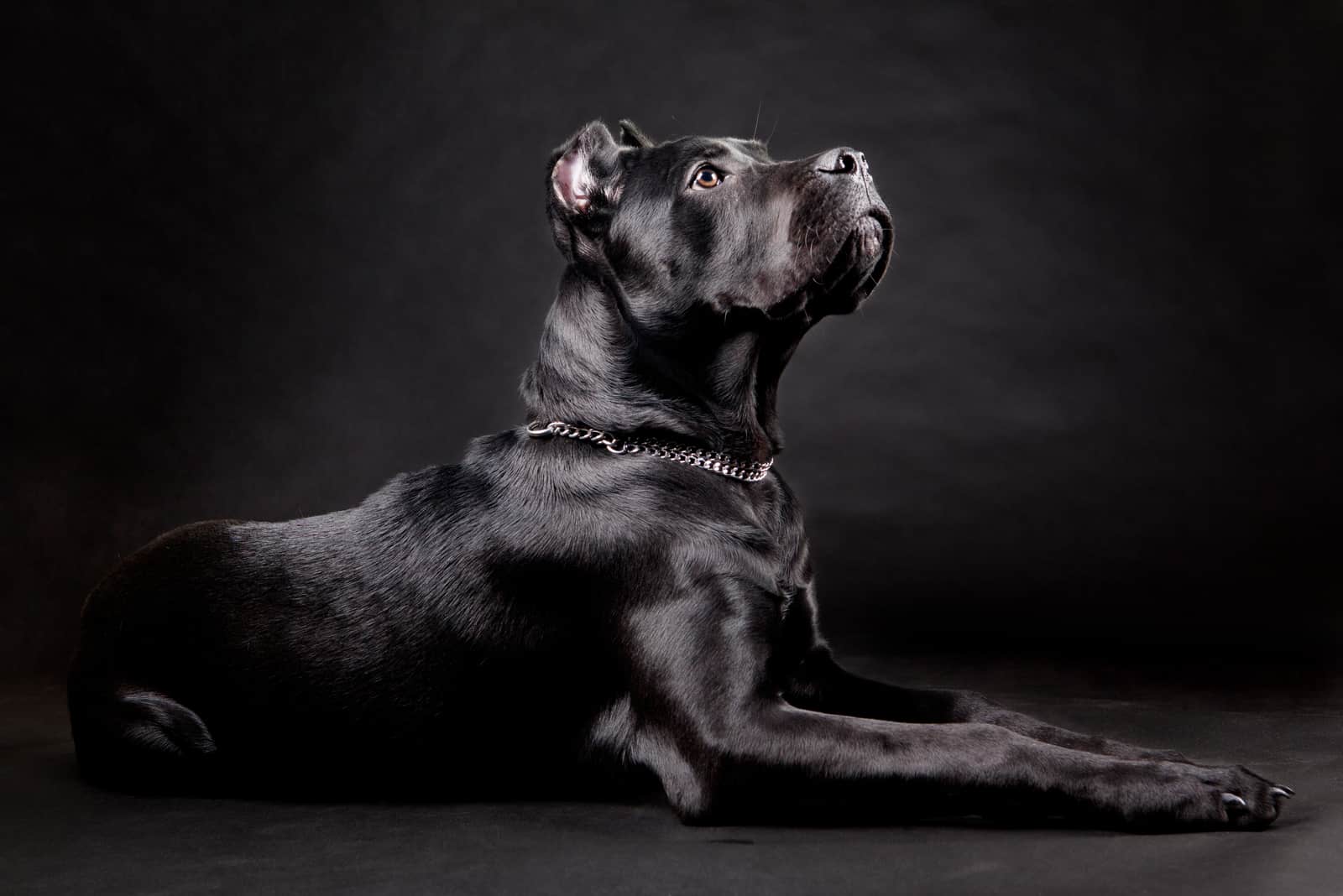 • Elma: Elma is a girl version of Elmo, standing for “the helmet.”

• Mimi: Were you aware that Mimi is a nickname for Maria?

• Mona: Mona or Simona means “hearkening.” We love how elegant it sounds!

• Nora: All girl names that end in “nora,” like Leonora, could have the moniker Nora.

• Tina: Tina, as in Valentina or Leontina.

• Zita: Zita’s the same as Zeta, but sounds even tinier to us! 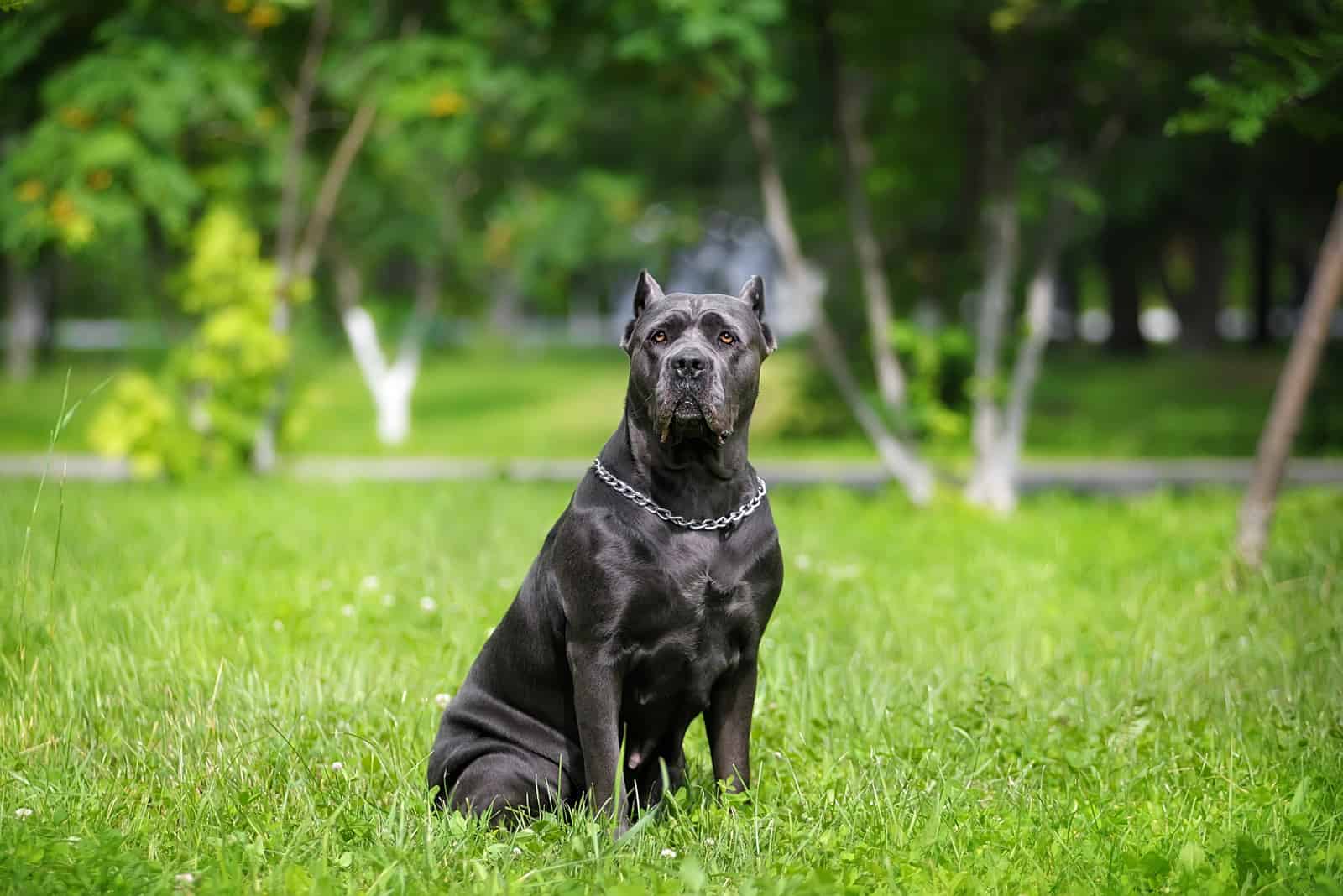 • Aragorn (Lord of the Rings)

• Blondie (The Good, the Bad and the Ugly)

• Zero (The Nightmare Before Christmas) 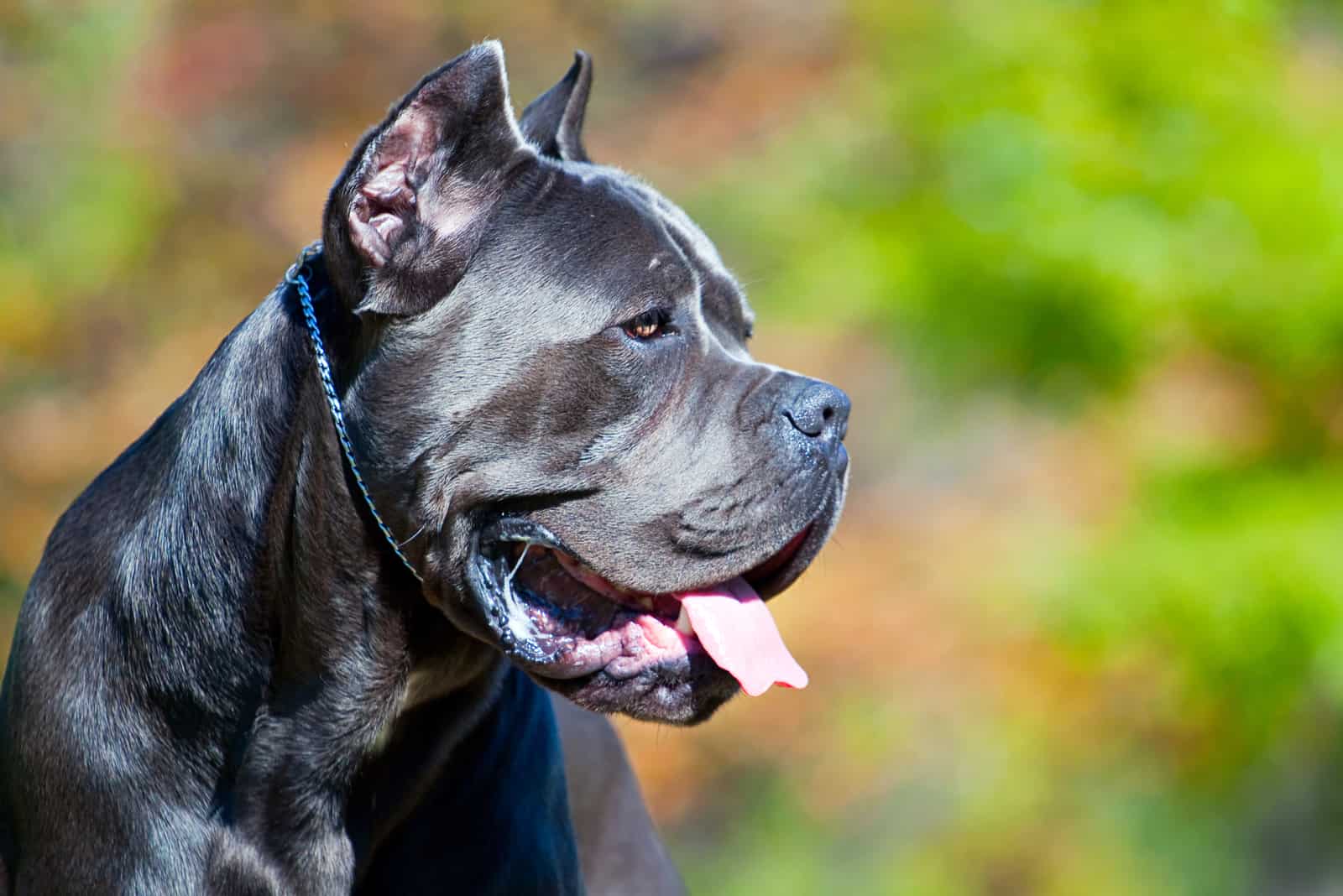 • Brunhilde, a Valkyrie in German mythology

• Delilah, from the Bible; Samson’s beloved

• Rosa, in honor of Rosa Parks 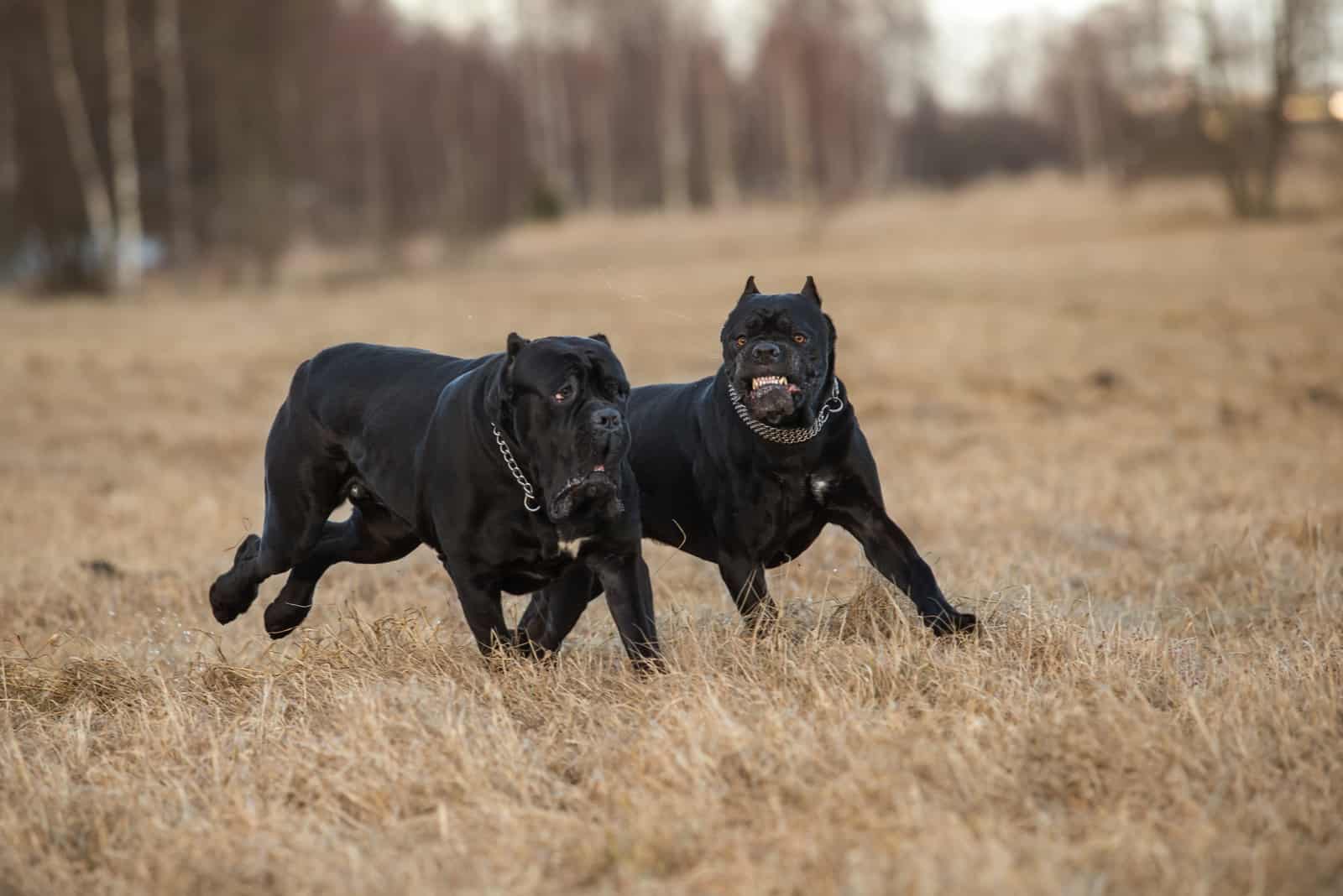 A Mashup Of Unusual Names For Your Cane Corso 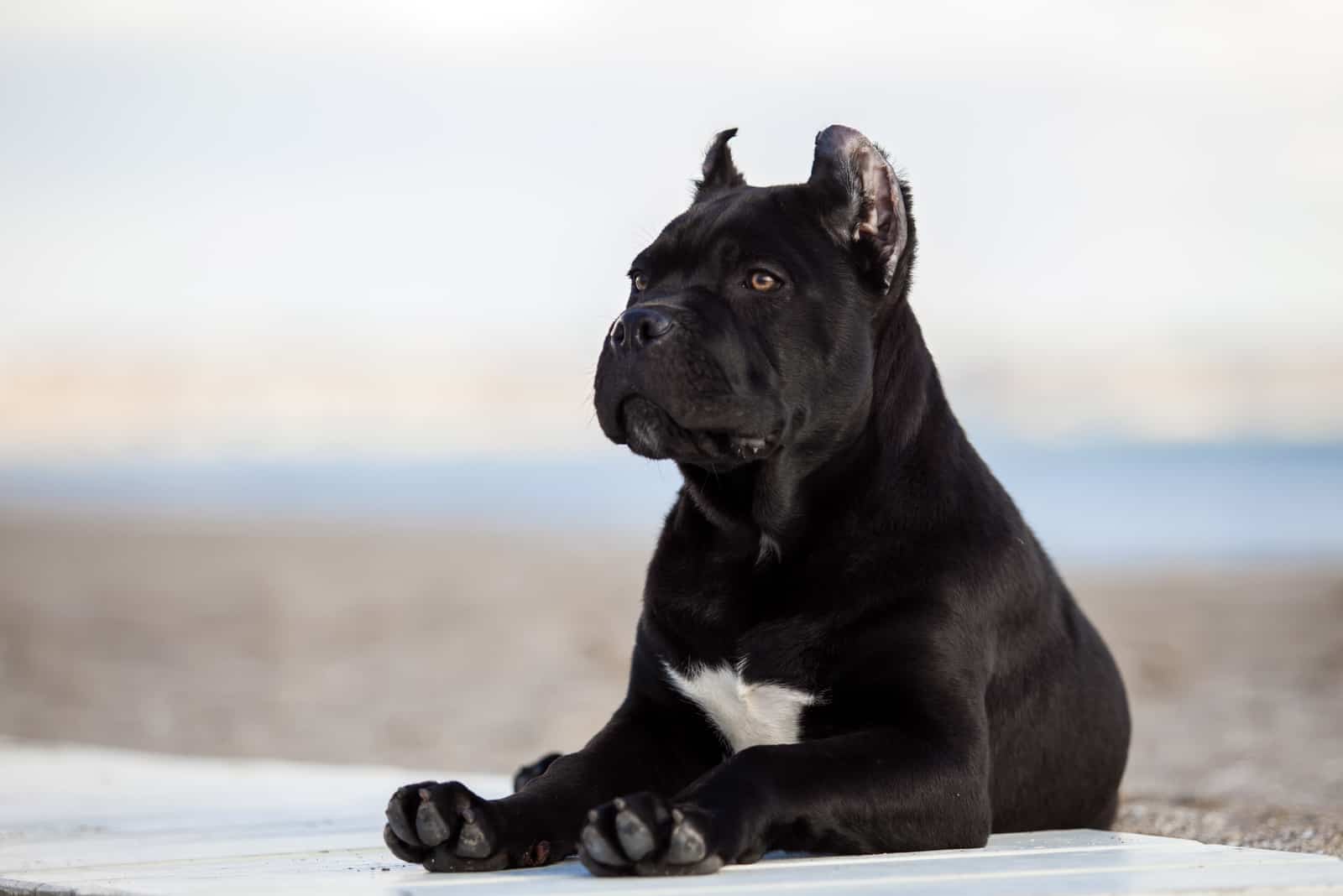 • Mia, an Italian name meaning “wished for a child.” Aren’t our pups our kids?

• Xander, a diminutive of Alexander

• Arthur, stands for “bear” (how appropriate!)

• Lex, an abbreviation of Alexander (“defender of men” in Greek) 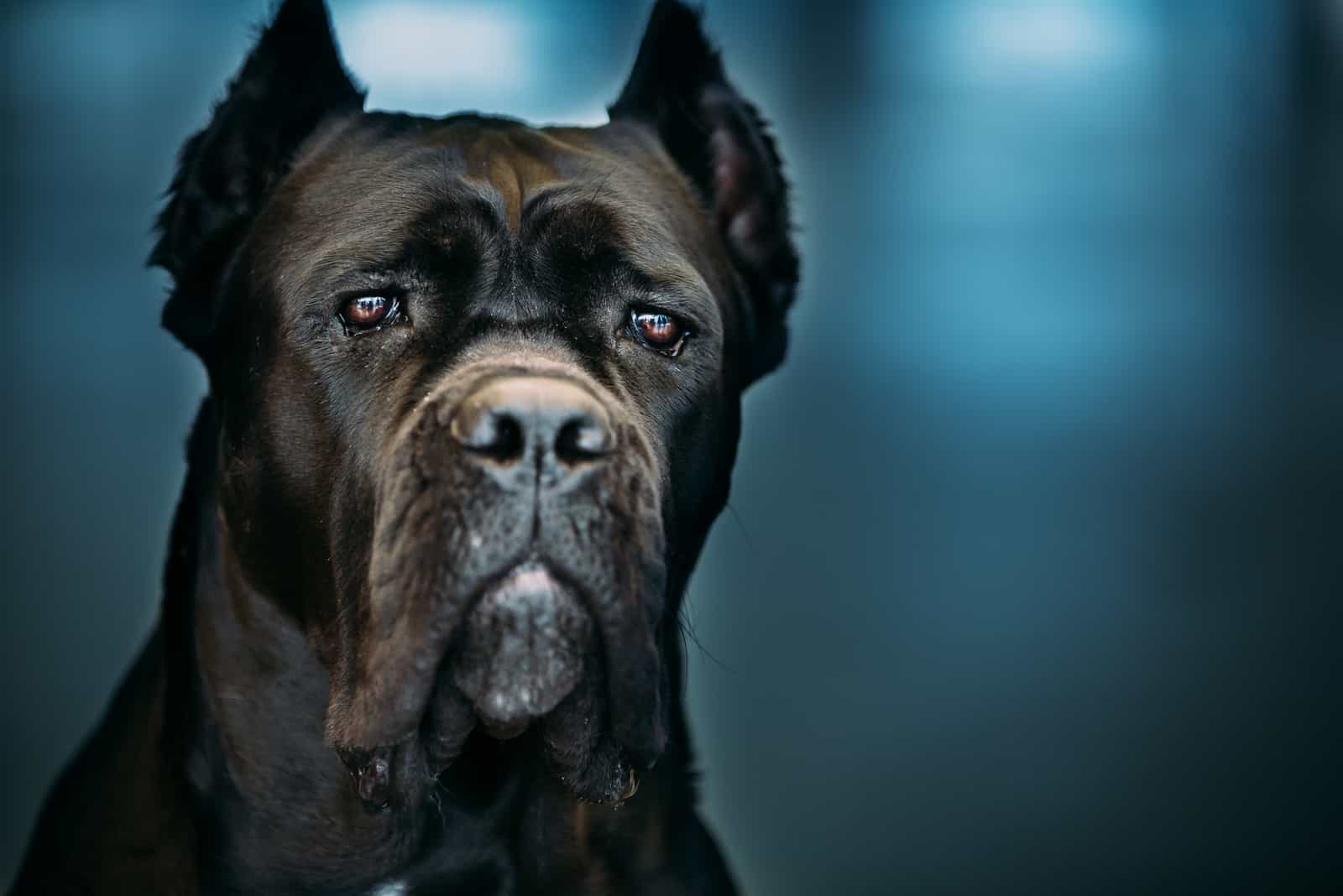 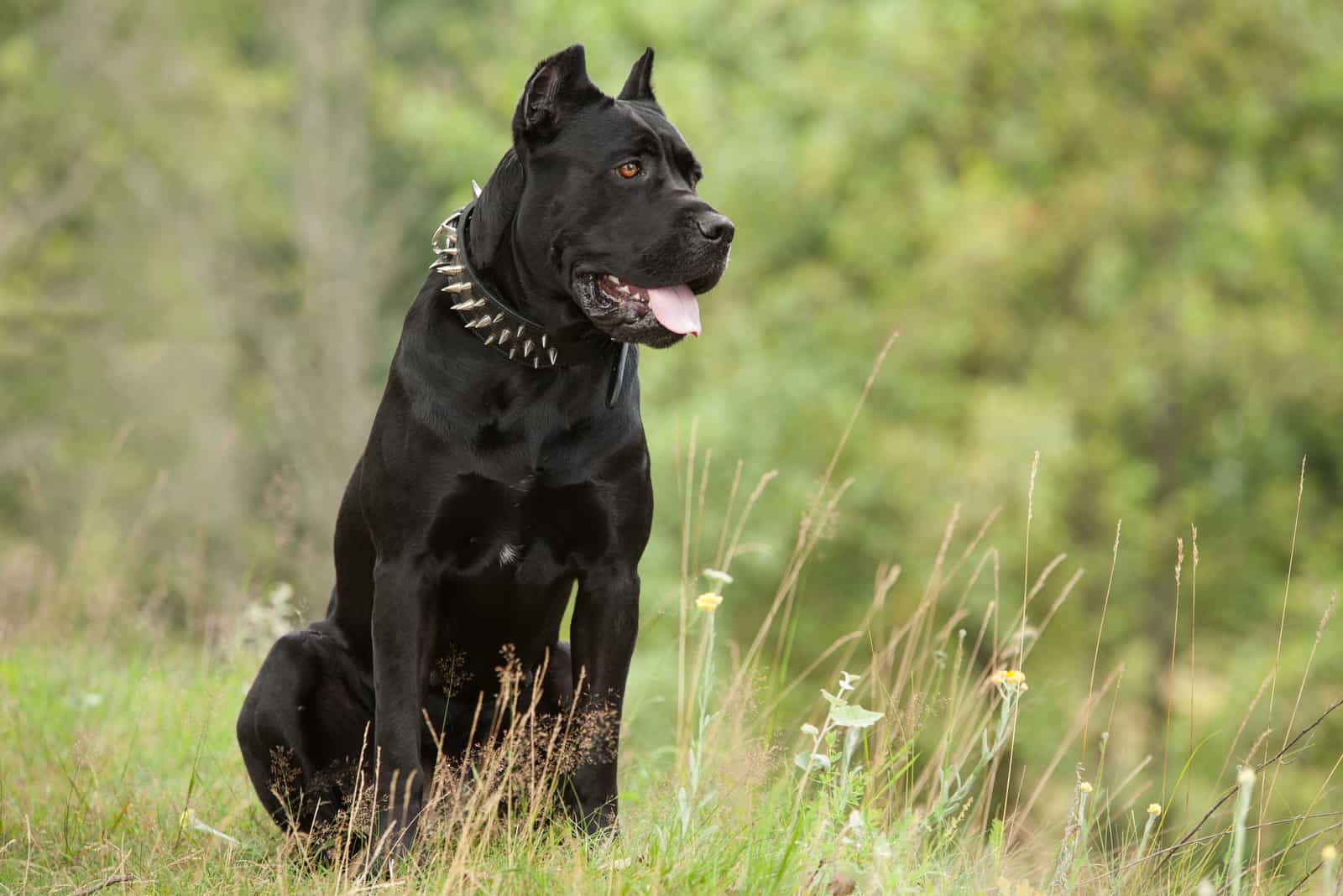 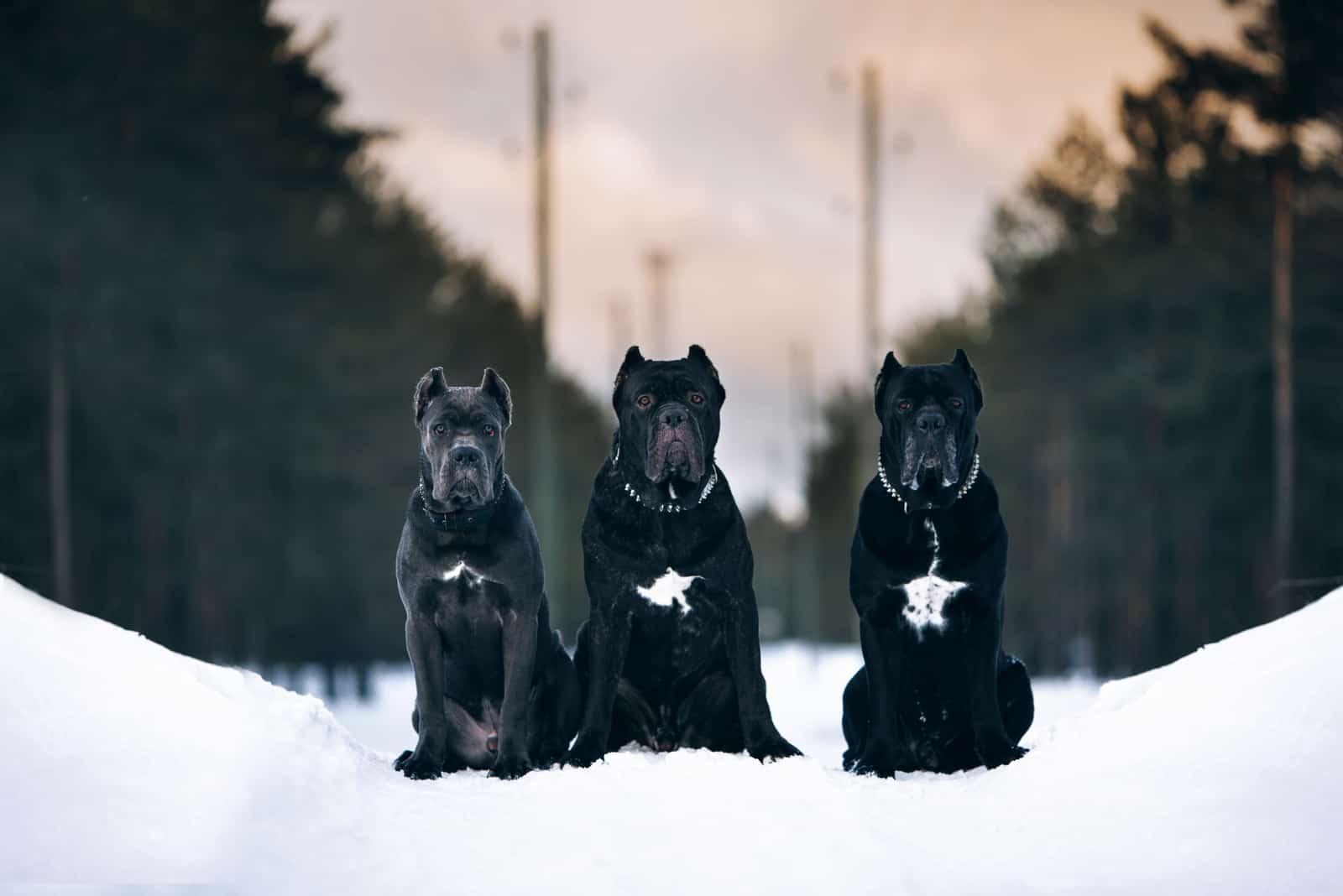 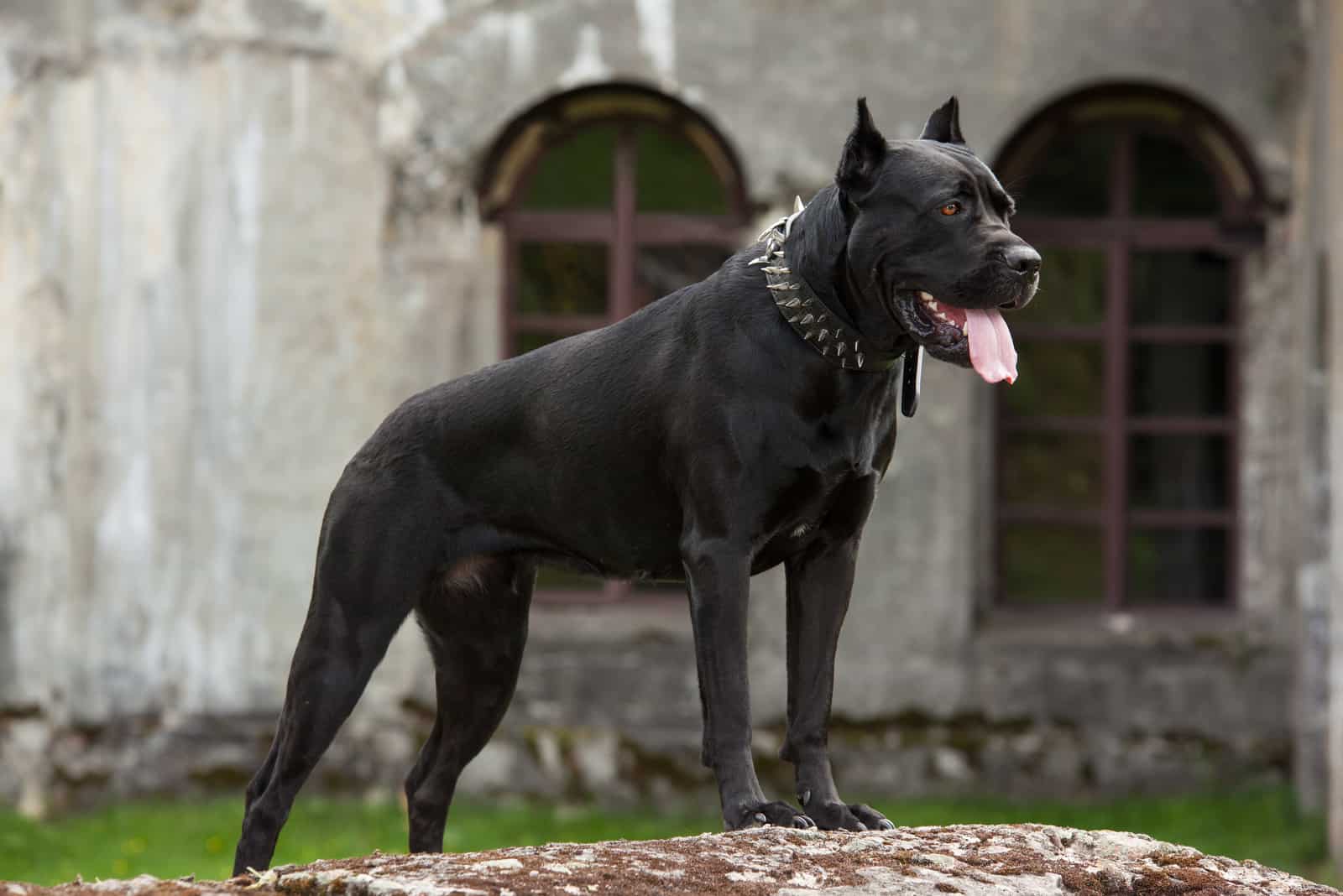 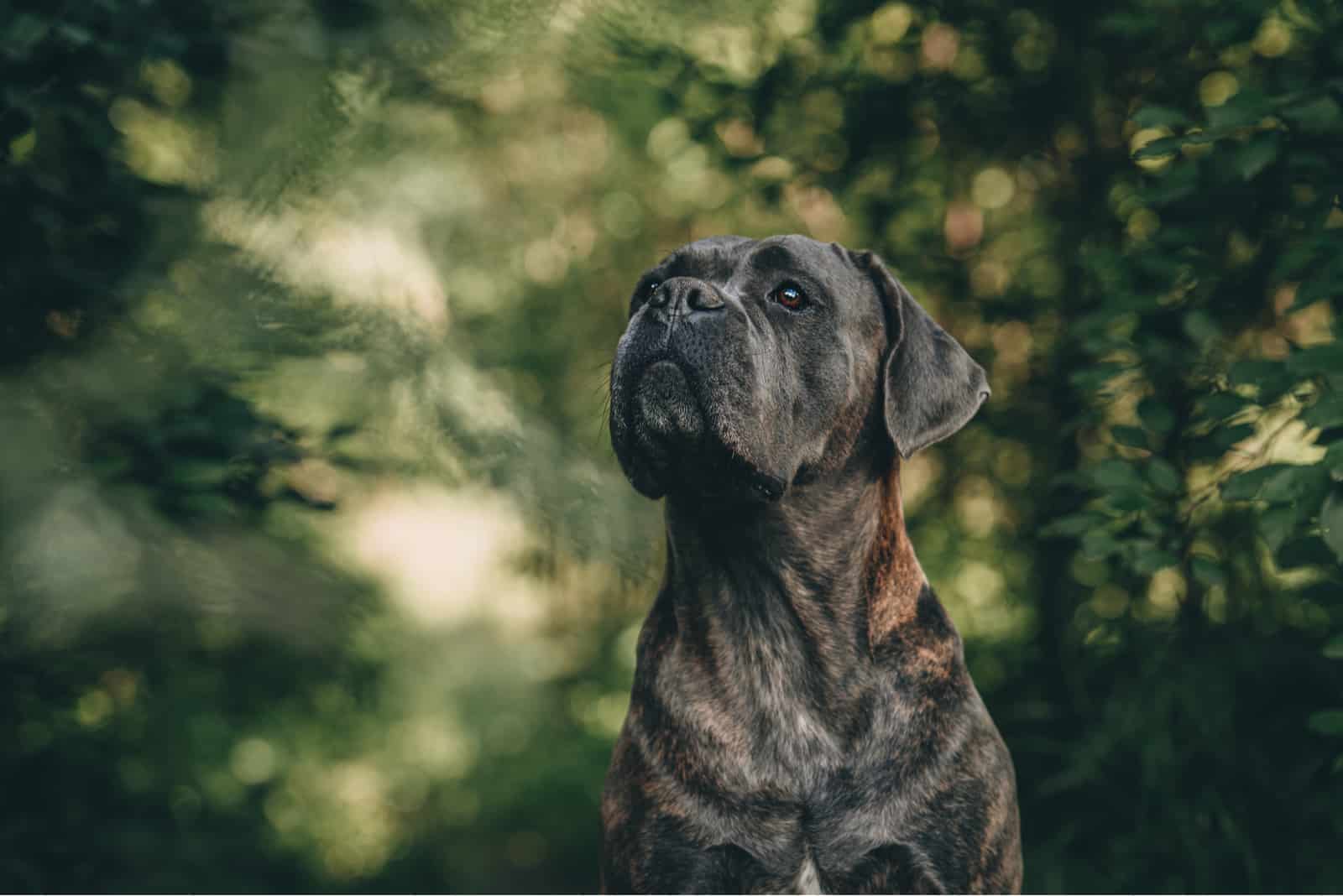 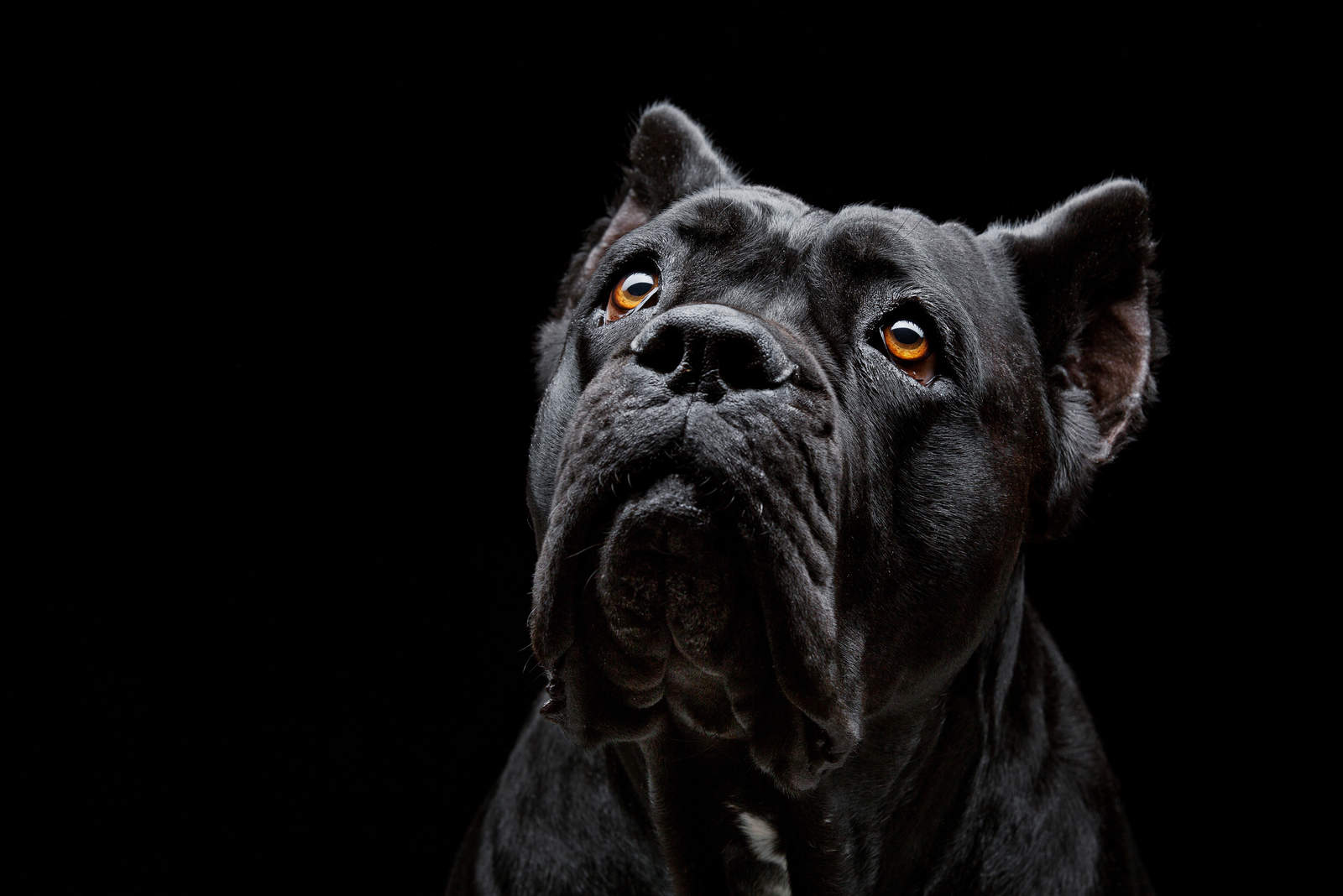 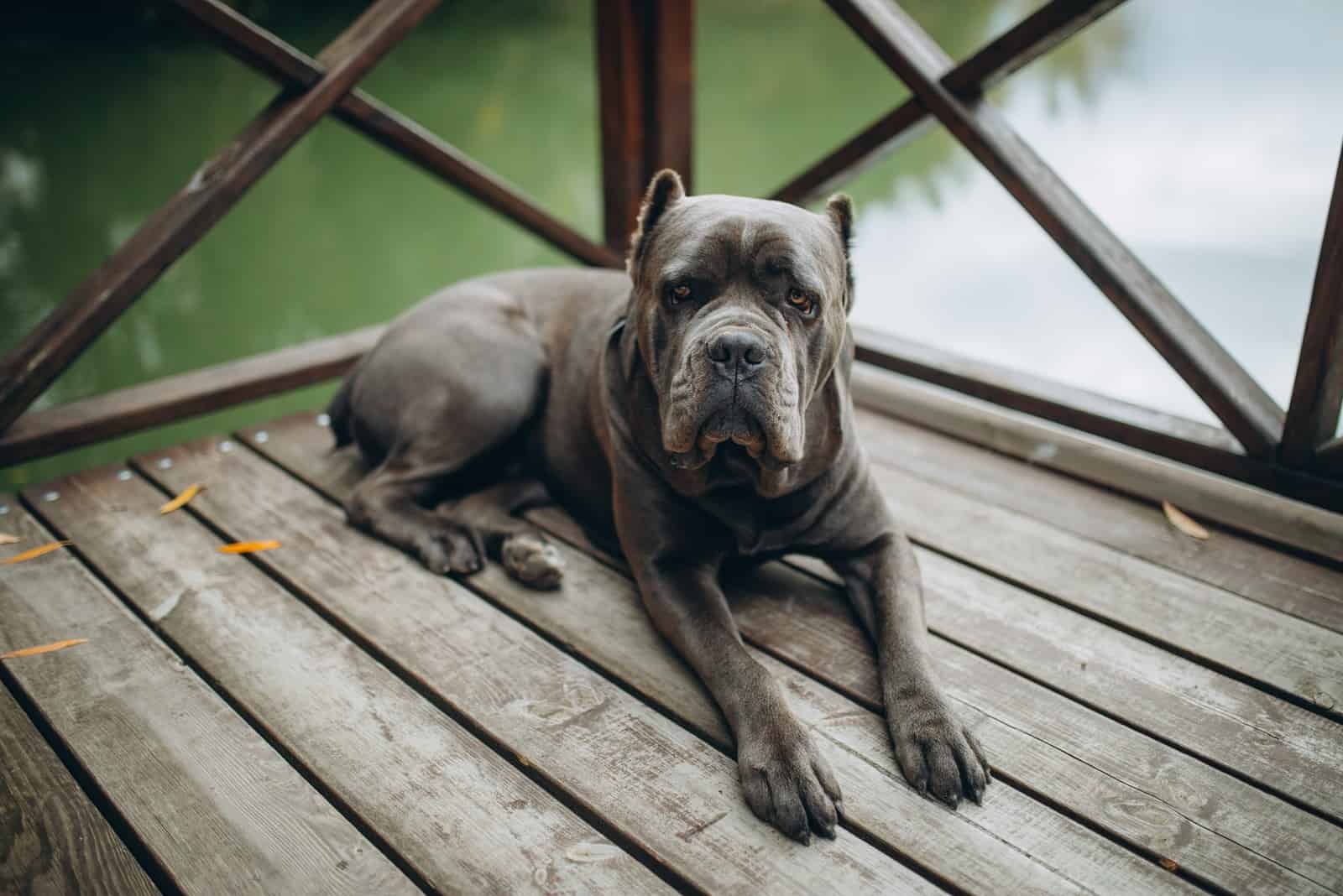 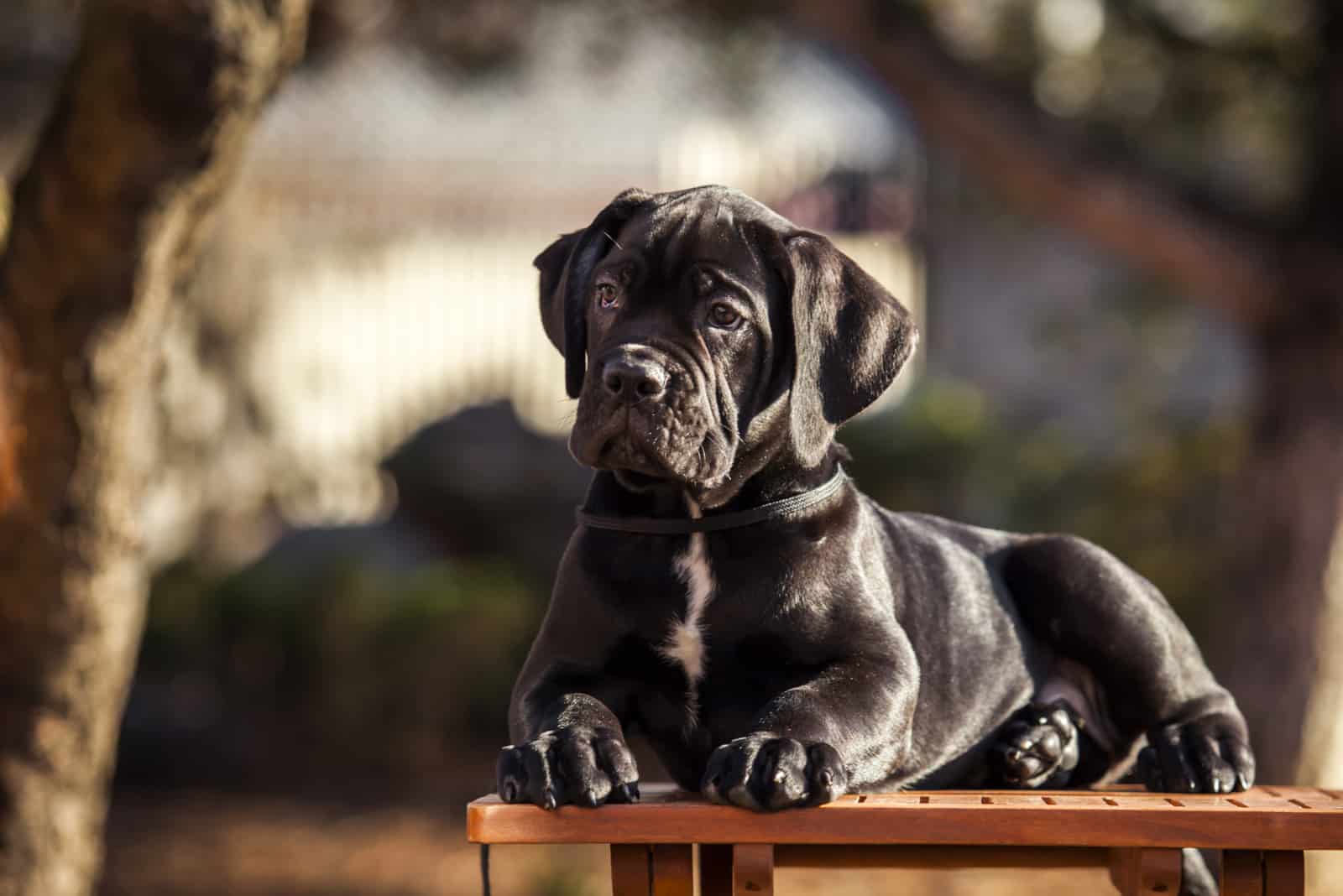 Cane Corso Names Inspired By The Letter “A” 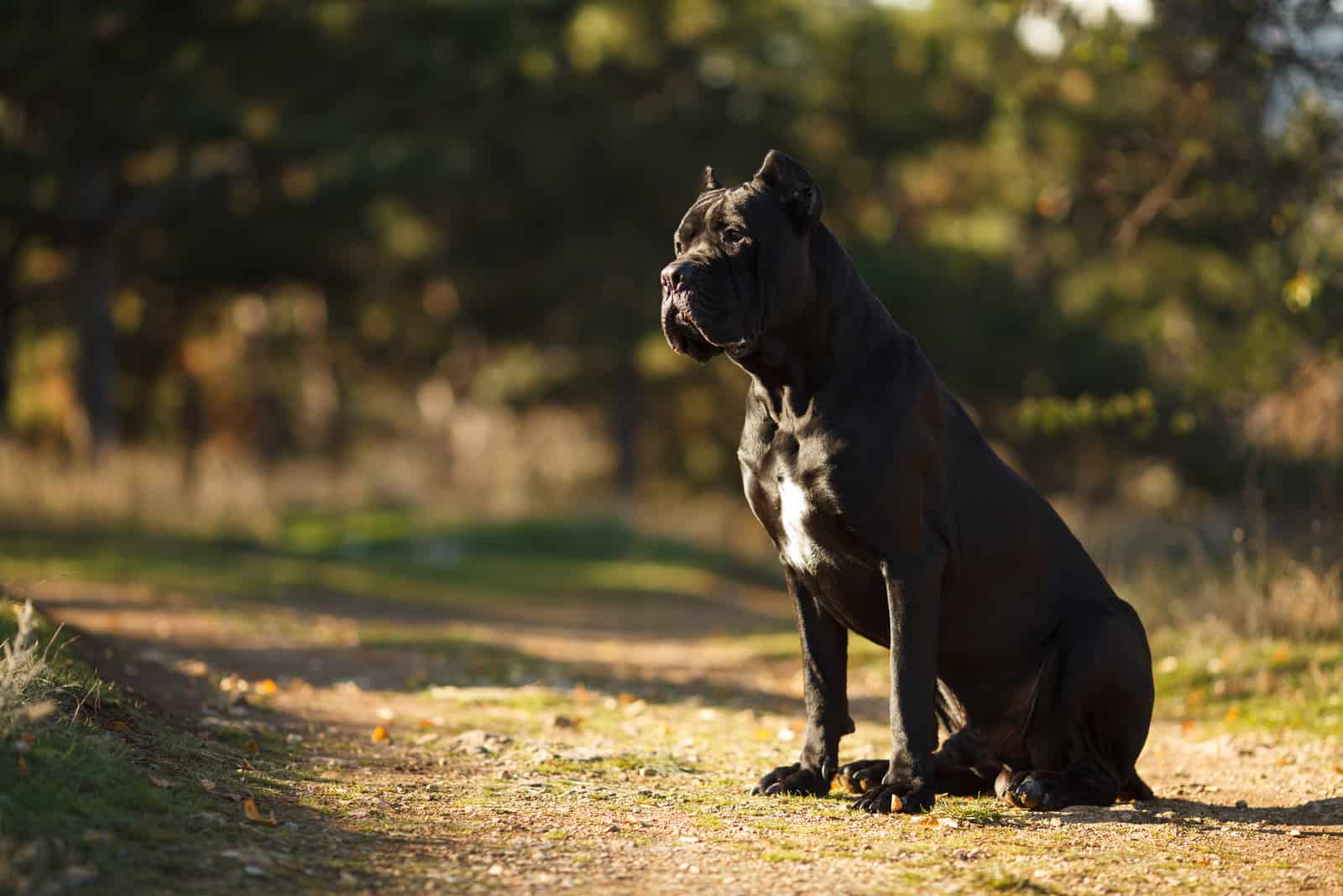 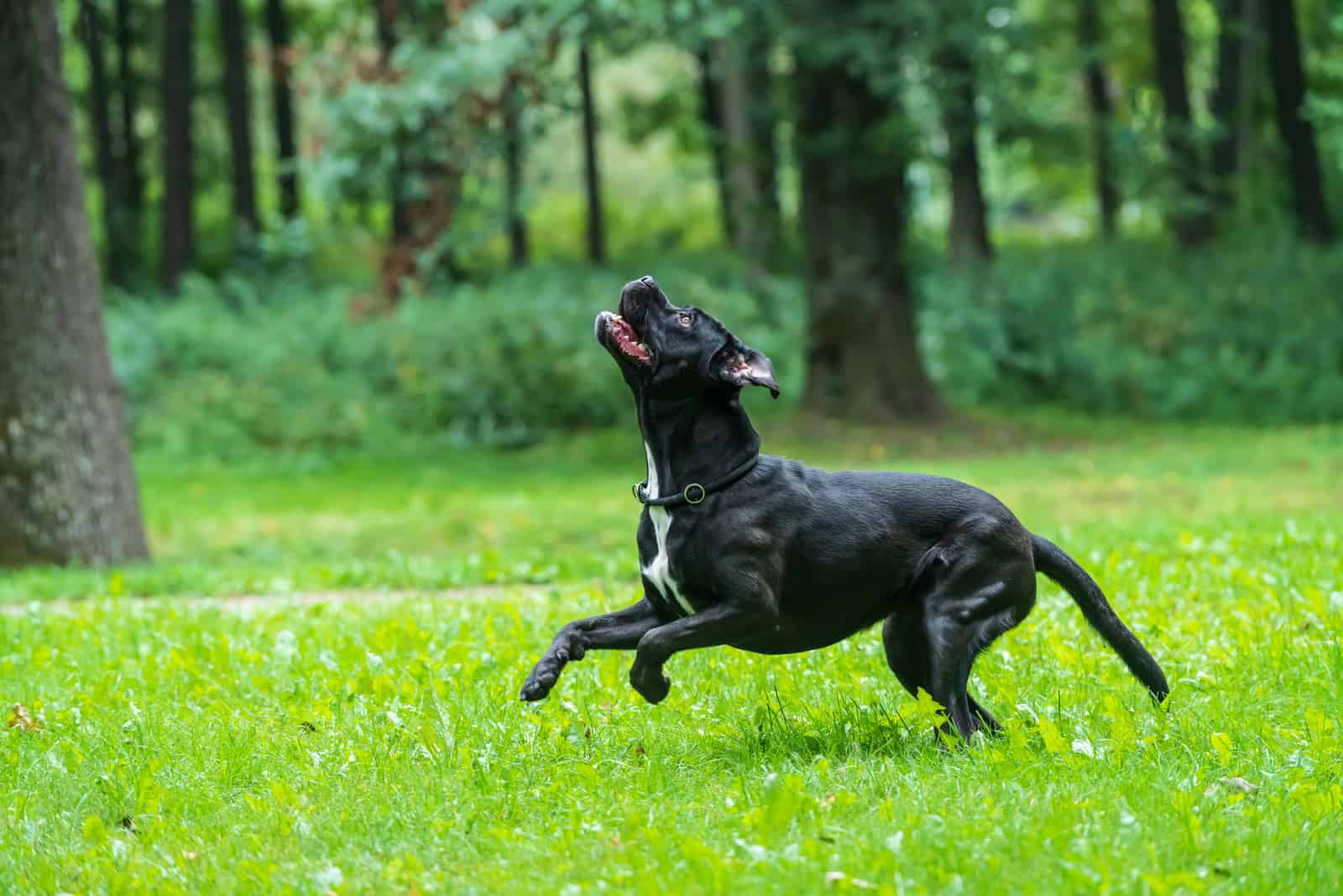 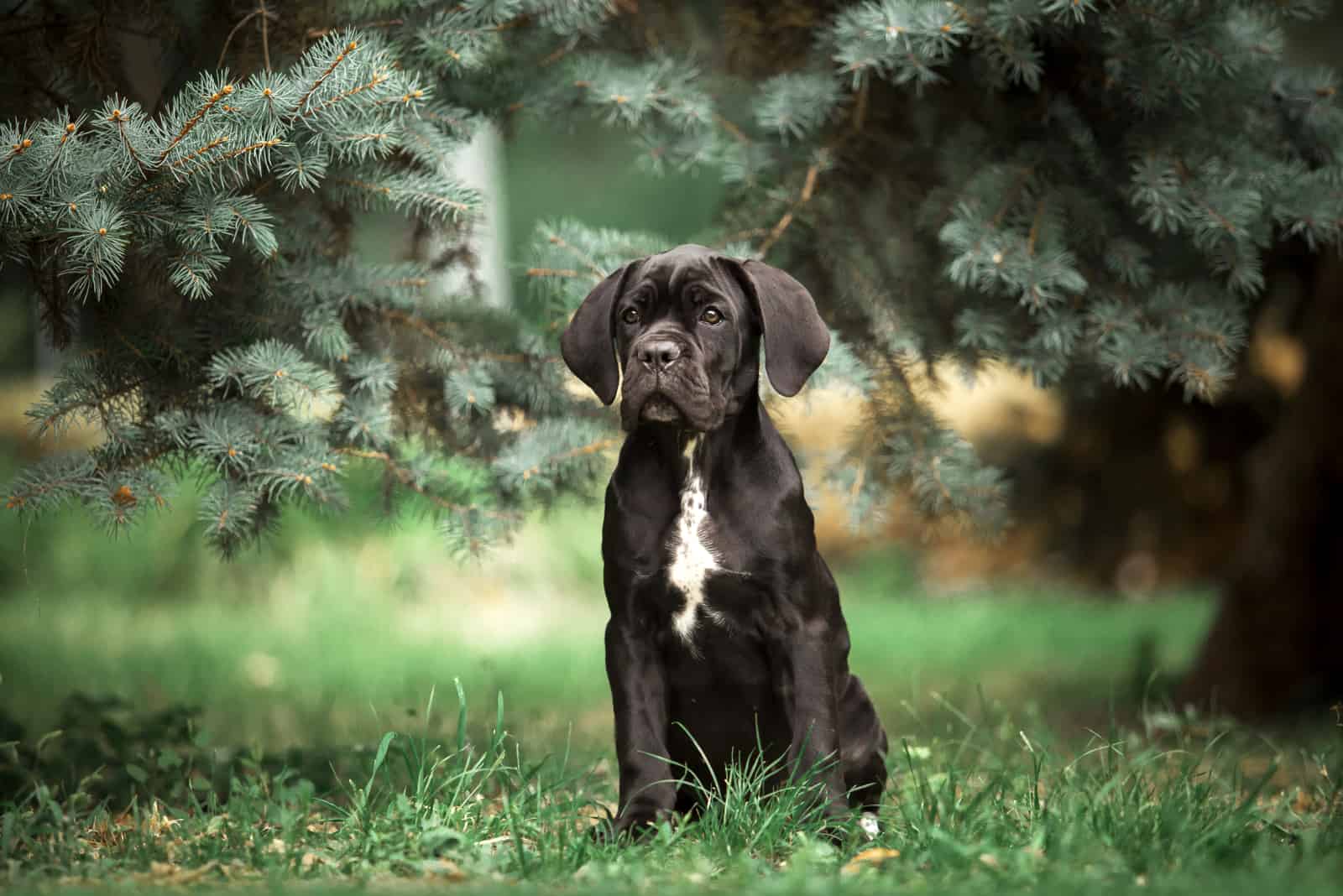 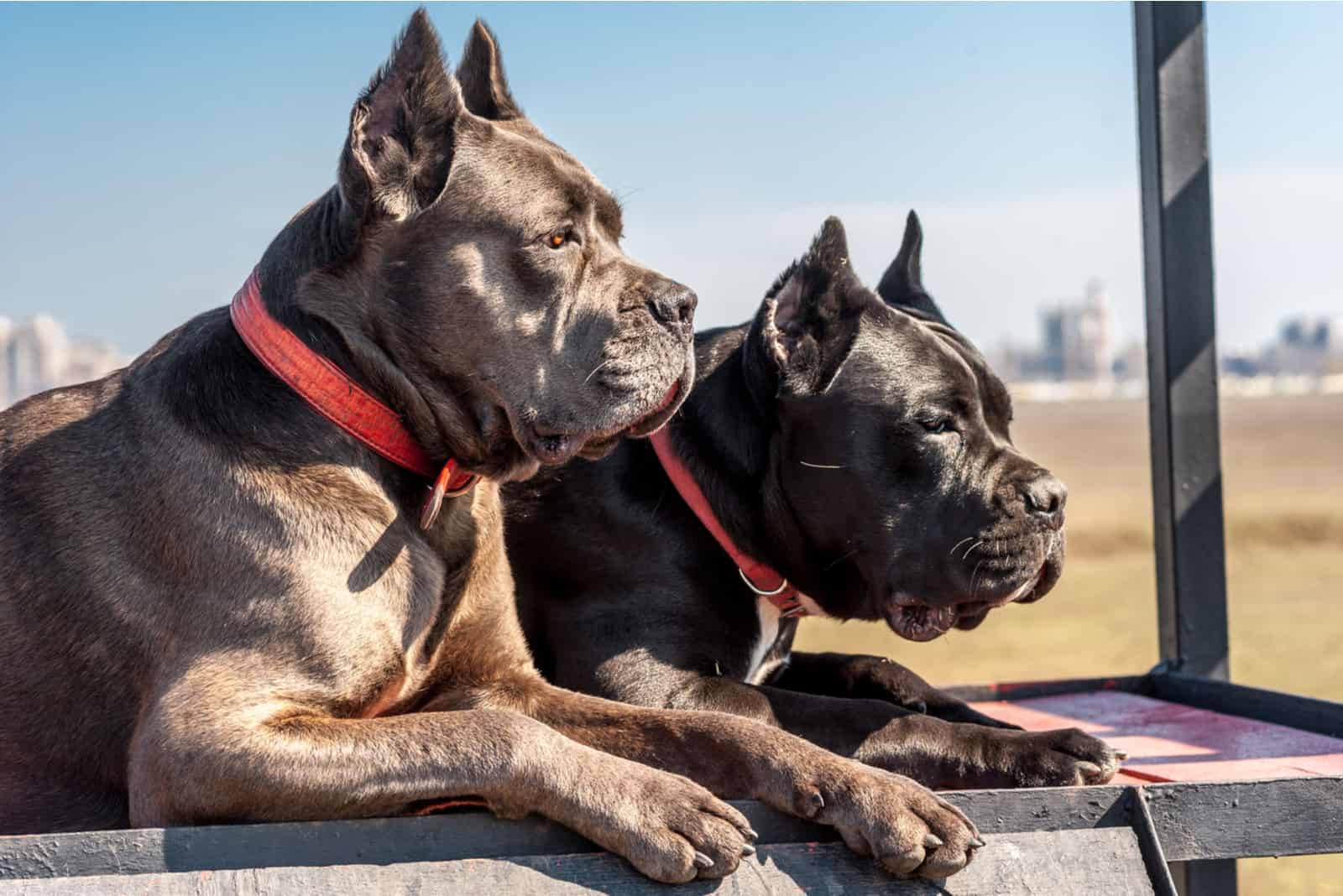 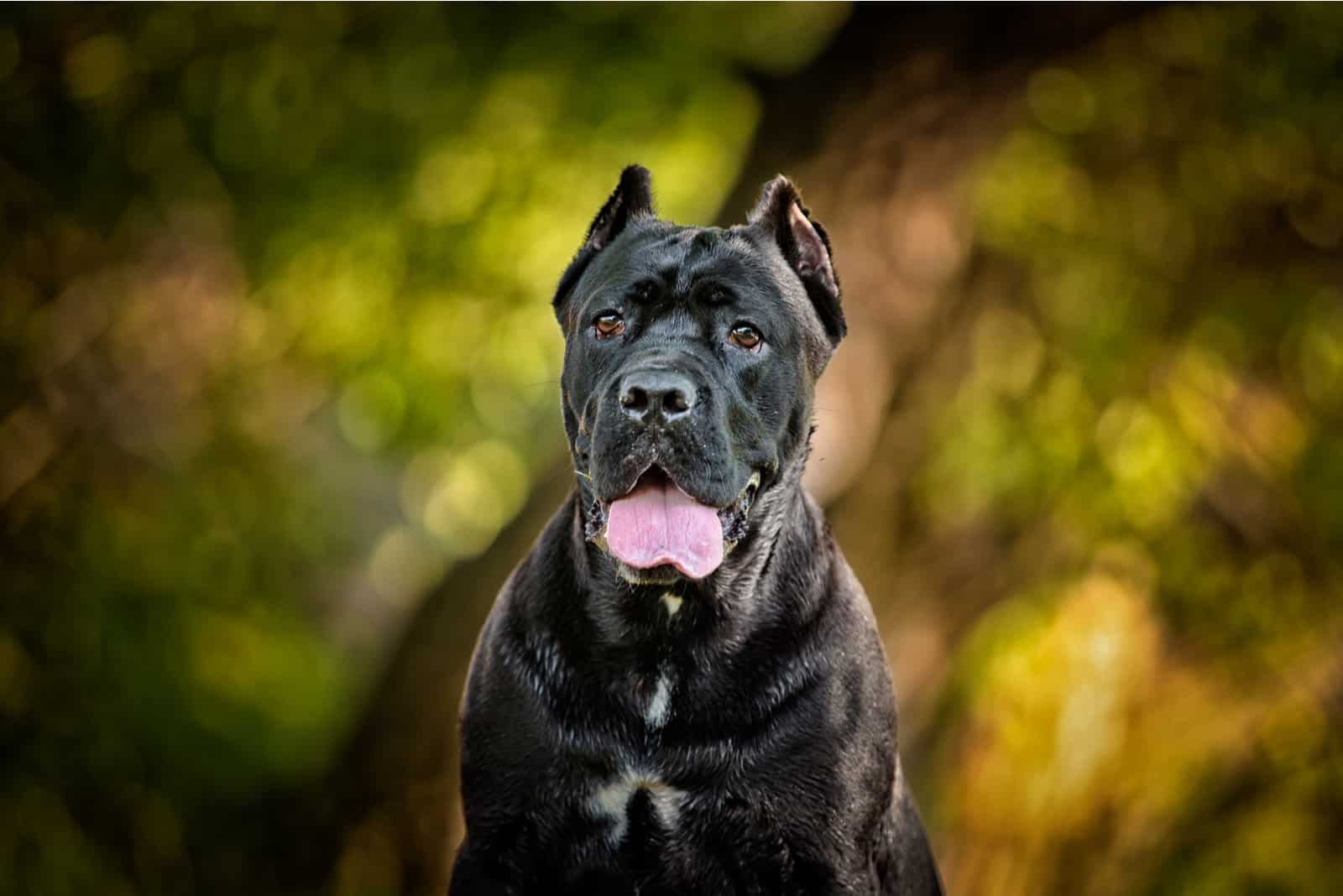 What To Keep In Mind When Choosing Cane Corso Dog Names

Before deciding on a name for your Cane Corso puppy, there are some things you should consider.

Always pick a name with a maximum of two syllables. Sure, longer names are fine but remember you’ll have to yell that name in a full dog park. Calling out for “Mr. Fluffy Pants McStuffington” sounds tricky, doesn’t it? You can only imagine how tricky it would be for your dog to learn it.

However, if you really, really want a longer name, you can always figure out a cool nickname as a shorter version. 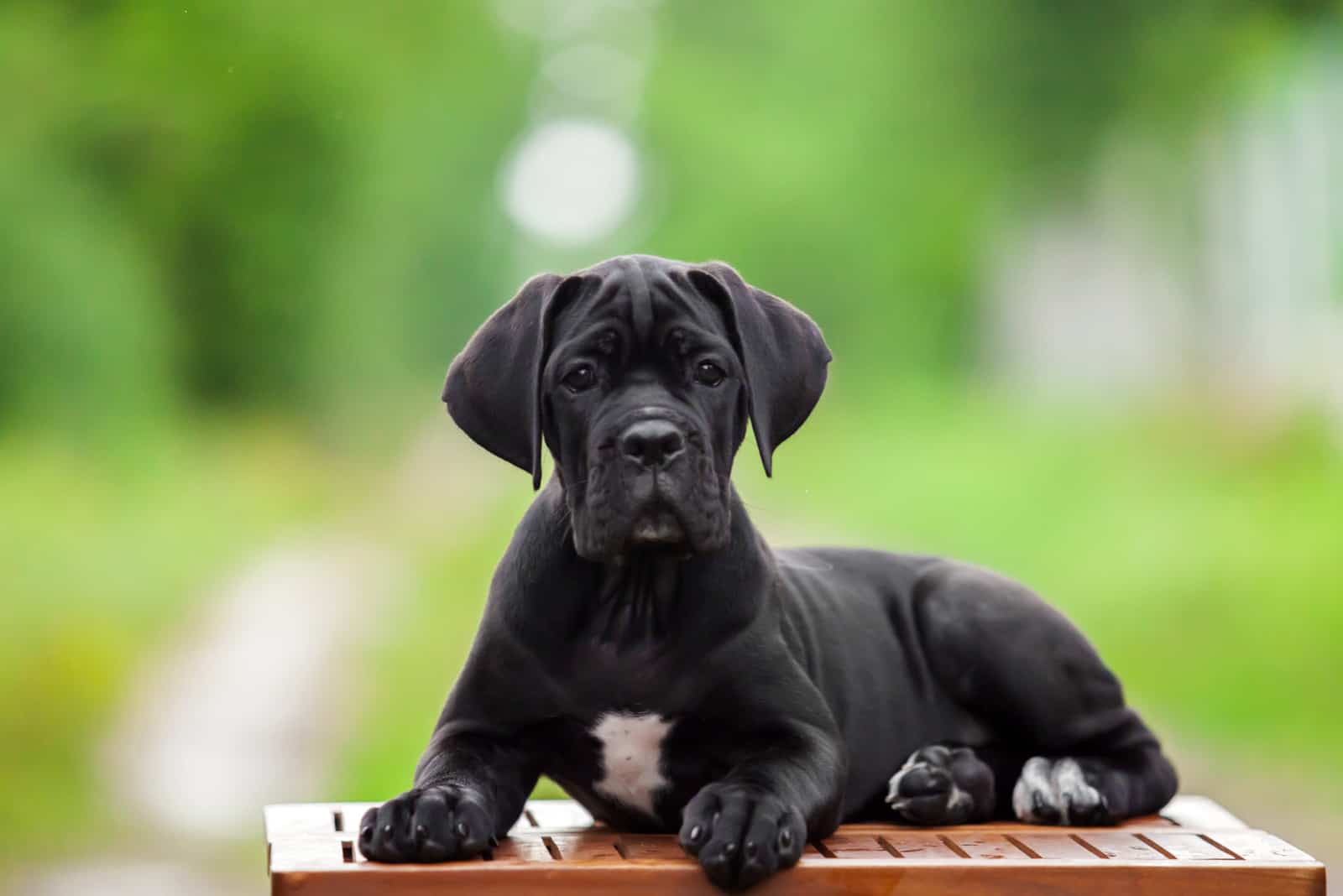 If you have multiple pets in your household, and you’re getting an addition, a Cane Corso puppy, you should be extra careful with naming. You want to avoid naming your dog something similar to other names in the household.

Also, avoid naming him something that sounds like a command during dog training. Ray sounds pretty much like “stay,” doesn’t it? Avoid confusion and choose a simple name!

If you want, try to come up with a unique dog name no other pooch has. We’ve got plenty of ideas, so you better check them out! Since many Cane Corso pups have black coats, you should check our list of awesome black dog names! And, since they’re quite big, maybe going through our list of big dog names isn’t such a bad idea? 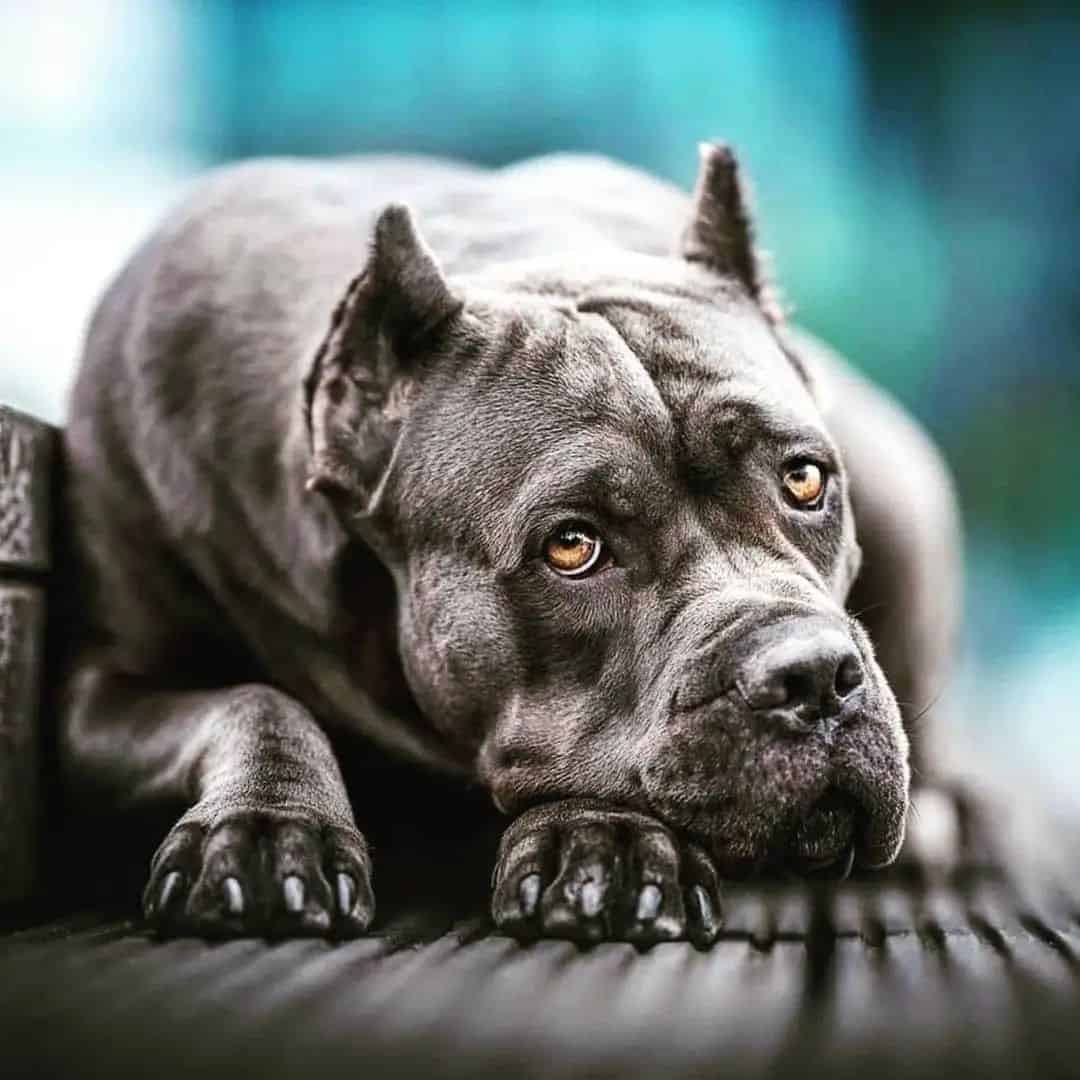 How Much Does A Cane Corso Cost? Puppy Cost Breakdown

Cane Corso Breeders In Wisconsin: The Best Choice You Can Make

[…] With Supremo Cane Corsos, you don’t have to worry about anything. Just pick a cool Corso name! […]

Flower Names For Dogs: A Lovely Bouquet Of Ideas

[…] Peony (Peonies do look pretty and fragile, but they actually symbolize braveness. So, yeah, a Cane Corso female named Peony sure sounds […]

Cane Corso Vs. Rottweiler – Which One Is The Better Guard Dog?

[…] If you have decided on a Cane Corso, you might want to check out our list of the best Cane Corso names. […]