Since the beginning of time, people have found a way to modify everything around us in an effort to make things better. In the past few decades, notable changes have happened in the dog world too.

Today, we’re switching the spotlight over to blue merle bulldogs, the French and English ones, and how they were changed.

Dog breeding was always a sport for creative dog lovers who found a way to mix and match different dogs to get the perfect offspring.

The mixing was usually driven by their wish to minimize health issues and improve the dog’s general well-being.

Still, there are breeding processes that happened purely for the sake of visual changes, such as the change in coat color. Lately, a big boom in the dog world was the introduction of the blue merle color.

How about we sniff around the merle gene and find out what it’s actually about?

The First Among The Rare Colors: What Is A Blue Merle Bulldog? The canine world is blessed with new dog breeds every now and then. Whether it’s only a change in color or other significant characteristics, the difference is very notable.

Among many fresh dog breeds, there’s one that stands out for its specific coat coloring: the blue merle bulldog.

The blue merle bulldog was introduced to dog lovers quite recently. The merle pattern can come in any color and affect any dog breed.

Merle is a gene that causes different color modifications in paw pads, nose, eyes, and most significantly – the coat!

The final result is missing pigment in these mentioned places. When the pigment removal happens on the iris, it’s called heterochromia iridis. The final result of this condition is the light blue eyes blue merle French bulldogs are famous for.

Puppies of many different breeds have blue eyes when they’re small. The eye color changes into their permanent color as the puppies grow.

If you want a dog with blue eyes even after puppyhood, a merle Frenchie would be your only option.

Both lilac, Isabella, and blue Frenchies change their eye color as they grow. Breeding two merles can result in genetic abnormalities. Still, this isn’t the only reason why two merles shouldn’t be bred together.

The merle gene might not express itself in cream or fawn-colored Frenchies. This condition is called ghost merle or cryptic merle.

Ghost merle is a variation of the standard colored cream/yellow coat, which is actually secret merle. Breeding a cream/fawn Frenchie with a merle French bulldog could result in a double merle.

Why? Because cream coated Frenchies could be secretly merle.

Such accidents can only happen if you buy from unreliable bulldog breeders who don’t know the origin of the parent pets.

Still, if the breeder conducts the necessary color testings and they show no danger of the merle gene, we see no reason you shouldn’t get the dog. Color discrimination shouldn’t exist even in the dog world either. Coat color is the least important thing every future dog owner should worry about.

You shouldn’t worry about if blue merle bulldogs are purebred either, because they, indeed, are.

A blue merle French bulldog or any other blue merle bulldog is without a doubt a purebred bulldog.

But, why the doubt in the first place? Why do so many people question the bloodlines of blue merle bulldogs?

It probably has to do with the fact it’s still unknown where and when the merle coat was introduced. The assumption is the introduction took place to breed the blue Merle French bulldog.

In this case, it could represent the introduction of the coat color or pattern of a different dog breed into the genetic pool. Once the new gene was introduced, the breeding would go a step back and breed again into a bulldog.

It takes many generations of backward breeding to lead to a 100% French bulldog. At some point in the breeding process, a foreign dog breed was introduced.

The first Frenchie was born some 150 years ago. It was a mix of an English bulldog with a Rat Terrier. Frenchie puppies carried only one coat color in the beginning: black brindle.

All the other colors were new and strange for the first few years – just like the merle color.

Now black, cream, fawn, brindle, and piebald are standard colors. It’s only a matter of time until the hype over merle puppies will be over. The creation of a new coat coloring will certainly bring that!

The AKC’s Stand On The Blue Merle Like in many other cases, the AKC stands firmly against specific appearances. Unfortunately, it’s the case here, too: the AKC said a big, fat NO to the blue merle color.

All exotic colors are considered non-standard, thus momentarily disqualified. The rare and prohibited colors are:

Unless your bulldog is black brindle, cream, fawn, sable, or pied, the American Kennel Club won’t recognize it. Still, the only thing that matters is how healthy your pup is. The rare colors are only a bonus dog lovers appreciate.

Health: Is A Blue Merle Bulldog A Healthy and Happy Puppy? A lot of negative comments about the blue merle’s health problems can be found throughout the Internet.

They all say the blue merle bulldog is genetically inferior. That information is absolutely false. These dogs can be extremely healthy, depending on if they were bred properly.

To ensure proper breeding, a merle dog should always be paired with a dog with a solid color coat.

If not watched carefully, the merle could be bred with another merle, secretly or not, and create an accidental disaster named the double merle.

The double merle has two copies of the merle gene, resulting in a significant pigment loss. Such conditions can negatively affect sight and cause deafness.

You can spot a double merle with its full white coat and bright blue eyes.

The merle gene has the same role in the removal of the pigment as the piebald pattern, so avoid breeding these two together as well.

Responsible bulldog breeders play a much more important role in the life of your pup than you realize. All in all, blue merle bulldogs are a genuinely healthy breed, unless we’re talking about the double merle.

There aren’t any major health issues, especially not connected with the dog’s coat color. All health conditions merle bulldogs could have, depend solely on the dog breed, not the coat color.

The Other Side Of The Family: Blue Merle English Bulldog Puppies Just like the French side of the family, English bulldog puppies can too have a merle coat. It’s a rare coat color that can’t be found naturally. The natural English bulldog colors are: 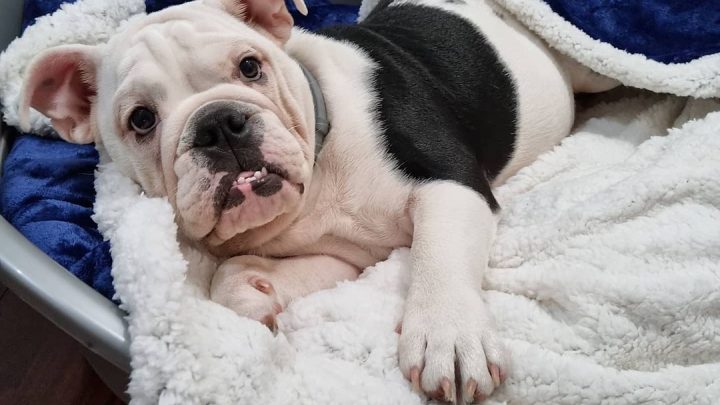 As you can see, there’s plenty of natural coat colors an English bulldog can have. If there’s still no color option you’d like your future bully to have, then check out these rare variations:

These colors are highly undesirable within a breed. Neither the American Kennel Club nor the English Kennel Club recognizes merle English bulldogs.

Both organizations are firm on their stance that merle isn’t a recognized color option.

Real English bulldog breeders can’t claim their puppy’s been approved by the AKC and the Kennel Club. If claimed differently, it’s a matter of falsified documents. The connection between the blue merle color and the many health issues with the bulldogs doesn’t seem to stop with this dog breed either.

However, claiming hereditary diseases have something to do with the coat color is 100% wrong.

English bulldogs are among those dog breeds with a heap of inherited health issues.

The list of health issues starts with the brachycephalic obstructive airway syndrome, through to skin and coat allergies, eye problems, heart defects, patellar luxation, and many others.

The troubles don’t stop there for the English bulldogs. The merle kind is especially prone to developing a series of health issues, with the present merle gene being the first on the list.

Furthermore, these pups are prone to deafness (partial or complete) and blindness. The merle gene is responsible for missing pigments across certain parts of the body, leading to hypersensitivity to light or even developing skin cancer.

What has to be stressed is that the merle gene isn’t responsible for every single health issue this dog breed has. Like it has been said before, the English bulldog is a breed with many health problems.

However, the merle gene may or may not trigger some conditions. There simply isn’t a breed standard that defines it.

Pricing: Can You Afford A Blue Merle Bulldog? Bulldogs, merle or not merle, are quite an expensive dog breed to own.

Their price depends on a number of factors, but the desirability of bulldog puppies on the market is the biggest one of them. Moreover, breeding is an extensive process, time-consuming, and demands a lot of effort.

Many dog breeders find themselves troubled because they hardly break even when selling these puppies. Some might even lose money!

So, why breed them in the first place? The answer is quite simple: it’s the love for these dogs that motivates them all!

As for merle puppies, the pricing varies from color to color. Some tri-merle dogs tend to cost even less than standard colors because of the health risks these dogs carry with them.

Bad publicity about their health has made merle bulldogs, French and English, quite difficult to sell.

Indeed, they are very exotic pets. Their price is living proof of how rare blue merle bullies are.

What we will tell you is to decide and listen to your heart. If it tells you to get a blue merle bulldog, either French or English, then get one.

Health risks do play a major role in deciding whether to get this dog breed or not. If you go with a reliable bulldog breeder, chances are you’ll end up with a generally healthy dog whose only fault is being colored differently.

For someone who loves unique-looking dogs, getting a blue merle bulldog would be a direct hit in the bull’s eye. 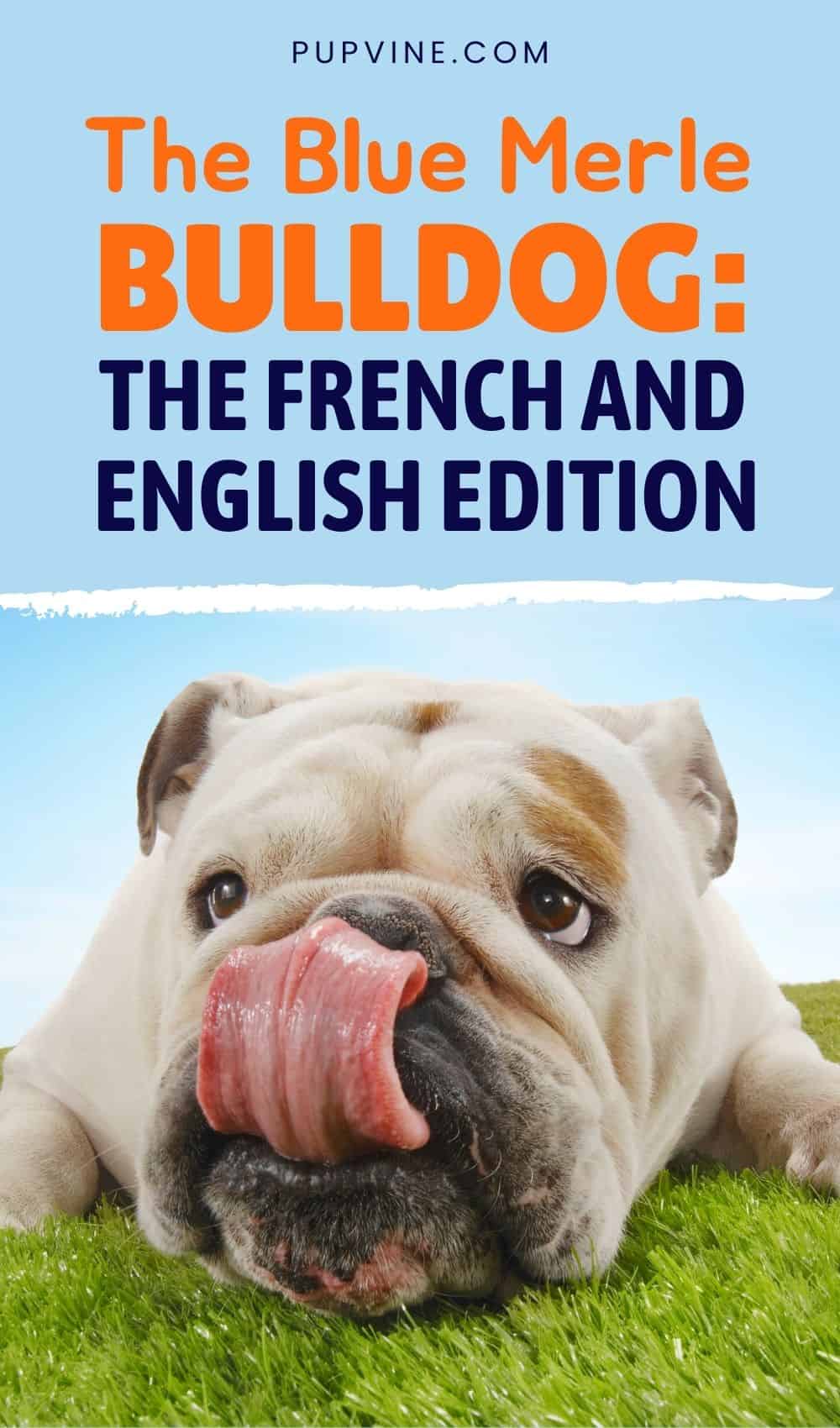 The Fabulous Colors: From Brindle To Sable French Bulldogs

[…] gene that gets diluted by other genes. The final result? A lovely pattern that gives us lilac, blue Frenchie, and black […]

25 French Bulldog Colors That Will Blow Your Mind!

Blue English Bulldog: A Guide To Care, Exercise, And Diet

[…] breeders are seeking new ways of satisfying this trend, producing dogs such as the lilac tri, merle, and blue fawn English […]