So, you’ve decided you want a Frenchie? Great choice! Congrats! But, which one do you want? Sable French Bulldog, white Frenchie, Isabella, piebald… Clearly, there are many options! It’s going to be a tough choice.

Still, whatever you end up choosing, keep in mind to always search for a reputable breeder that will be honest about possible health issues and behavioral problems like aggression. After all, a color is only a color. You want Frenchies for their fabulous character, easy trainability, and good health condition, don’t you?

Let’s dip our brush into the amazing palette of Frenchie colors! 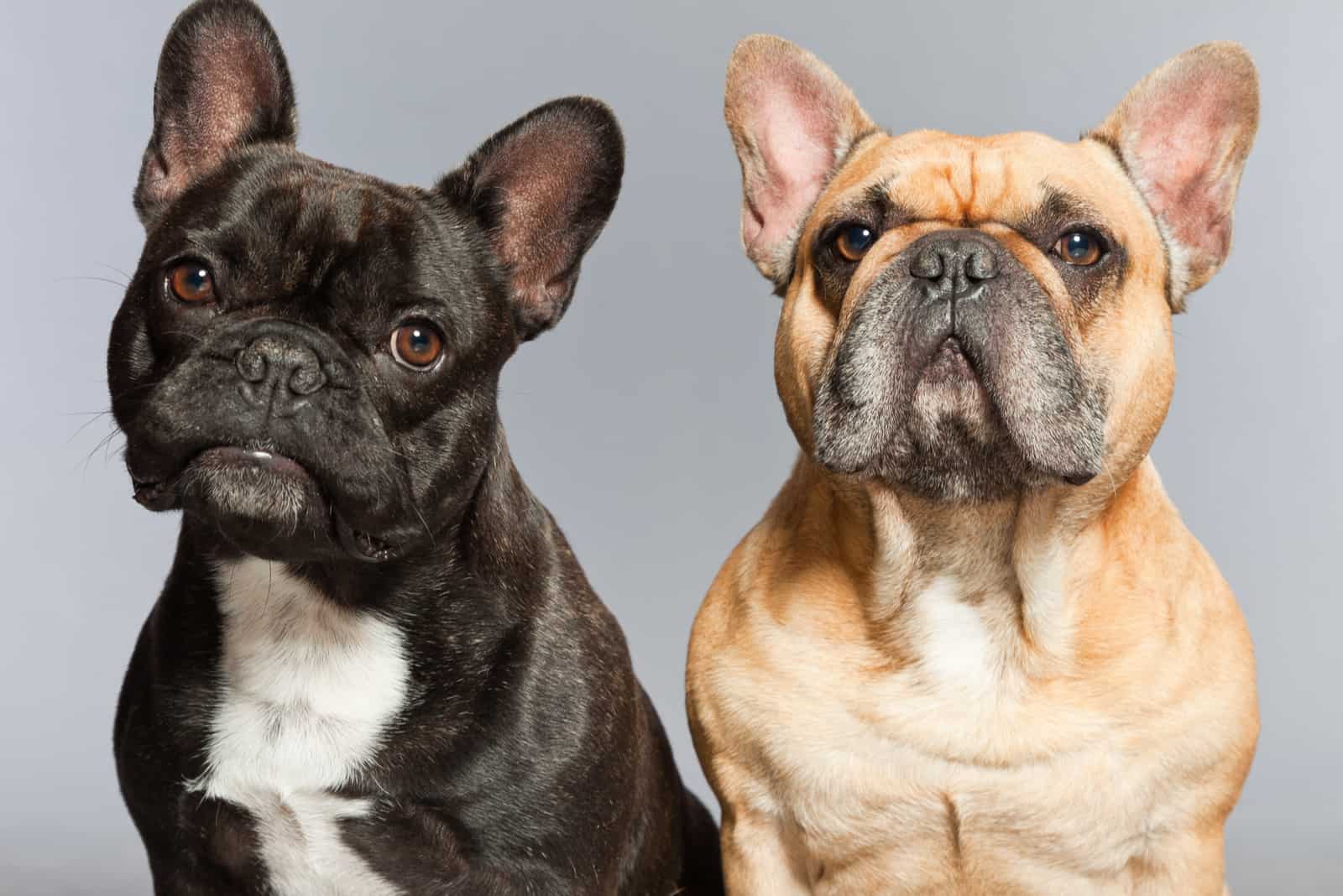 Rarely do other dog breeds have so many wonderful color variations as our pup of the day – the French Bulldog. That’s one of the reasons why this pooch is among the world’s most beloved dogs.

There are as many color variations as there are unique characteristics in one Frenchie. Sometimes you need to stop and wonder: where should you start? Some people gravitate towards a specific color, e.g., black, and some prefer color patterns. There are also those who love every type!

Do you know which one of them is right?

All of them are! No matter which color you choose, a Frenchie will always be a Frenchie, the cute and quirky dog with an adorable face and floppy ears you won’t be able to resist your kisses.

Sadly, we can’t claim that French Bulldogs are hypoallergenic.

However, not everyone agrees that all the colors are right. The AKC is always here to blame for not accepting certain pooches. The widely popular organization, the American Kennel Club, has specific standards for recognizing a coat color.

This doesn’t mean the French Bulldog breed isn’t a recognized and registered one. No, it only means rare-colored Frenchies have no recognized color and can not compete in the AKC show ring. This is sad news if you want to compete. But, if you don’t, nothing here can bother you.

The AKC lists the following colors as acceptable:

Any other color would mean disqualification.

The undesirable colors are: 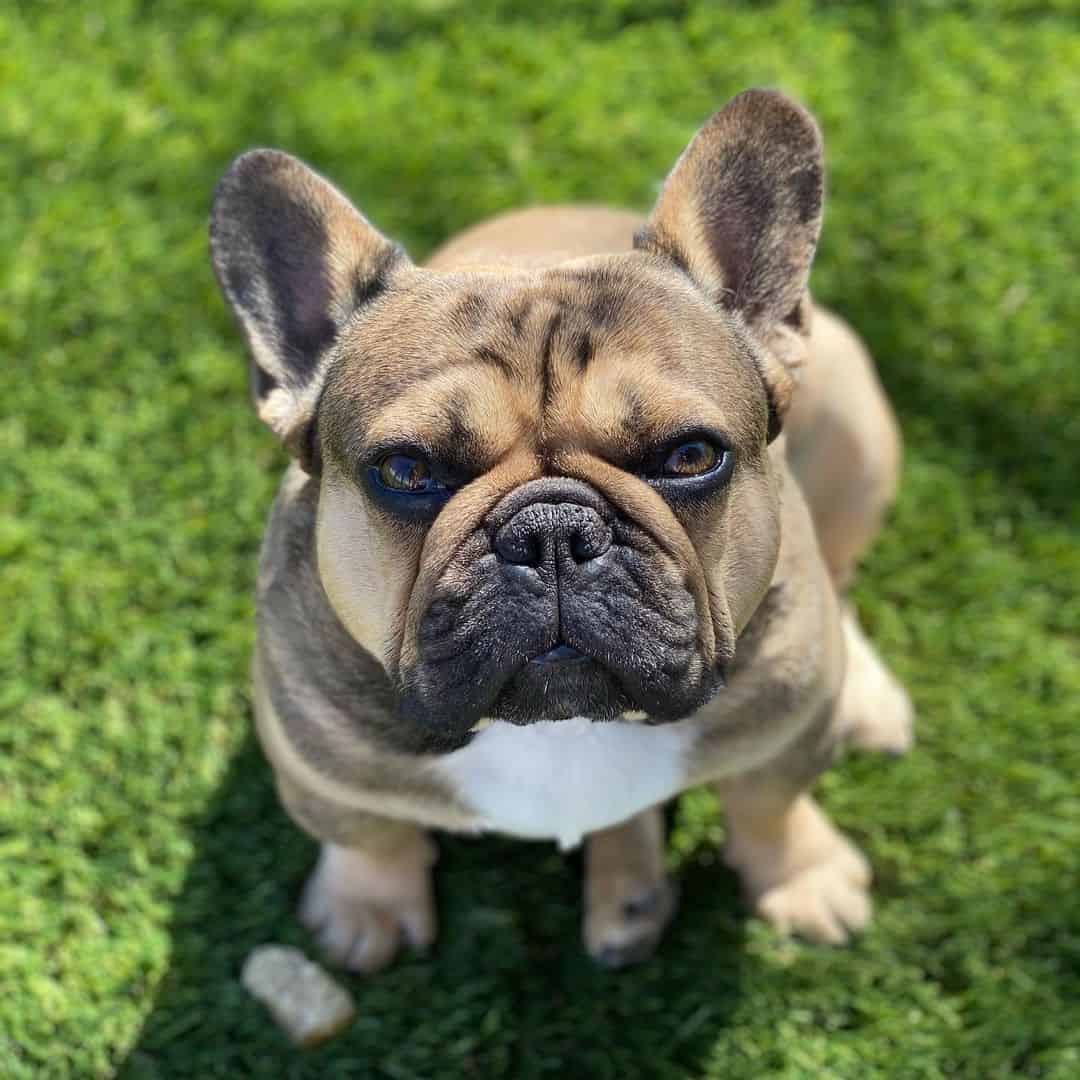 The color black means all black, with no traces of brindle.

To help you better understand the color variations, you need to take a look at the color hierarchy first. Some color genes are simply expressed differently.

Anyone with a basic knowledge of recessive and dominant genes can explain why some Frenchies are more pricey than others since color is the biggest factor in determining a Frenchies’ price. The other factors include the breeder’s reputation, location, litter size, etc.

For example, the standard red fawn color is less expensive than the solid blue one. The blue or chocolate gene is a recessive one, making these two particular colors rare and harder to find. Meaning, dogs of these colors will be more expensive than a regular fawn Frenchie.

Furthermore, pure black is also a recessive gene. A black Frenchie with tan points is another rare color pattern. These black and tans are pure rare beauties.

Frenchies come in many different colors. As we mentioned earlier, they can be fawn (a light brown French Bulldog with or without a black mask), black Frenchie, chocolate Frenchies, blue French Bulldogs, grey, cream, lilac, merle, pied Frenchie, etc.

There are numerous color variations and patterns both male and female Frenchies can fashion.

A solid Frenchie puppy means that most or all of their cute, fluffy coat is one color. They can be solid with a dash of white on their chest, neck, head, nose… Although it may sound pretty rare, these variations are actually quite common. These features only make your Frenchie more unique than some others.

Now that you generally understand what’s going on in the crazy world of colors, you can take a look at all the color and pattern variations Frenchies come in and choose the right one for yourself.

These colors are each different, special in their own way, but the only way a Frenchie can be special to you is if you both feel a unique bond created from the very first moment. 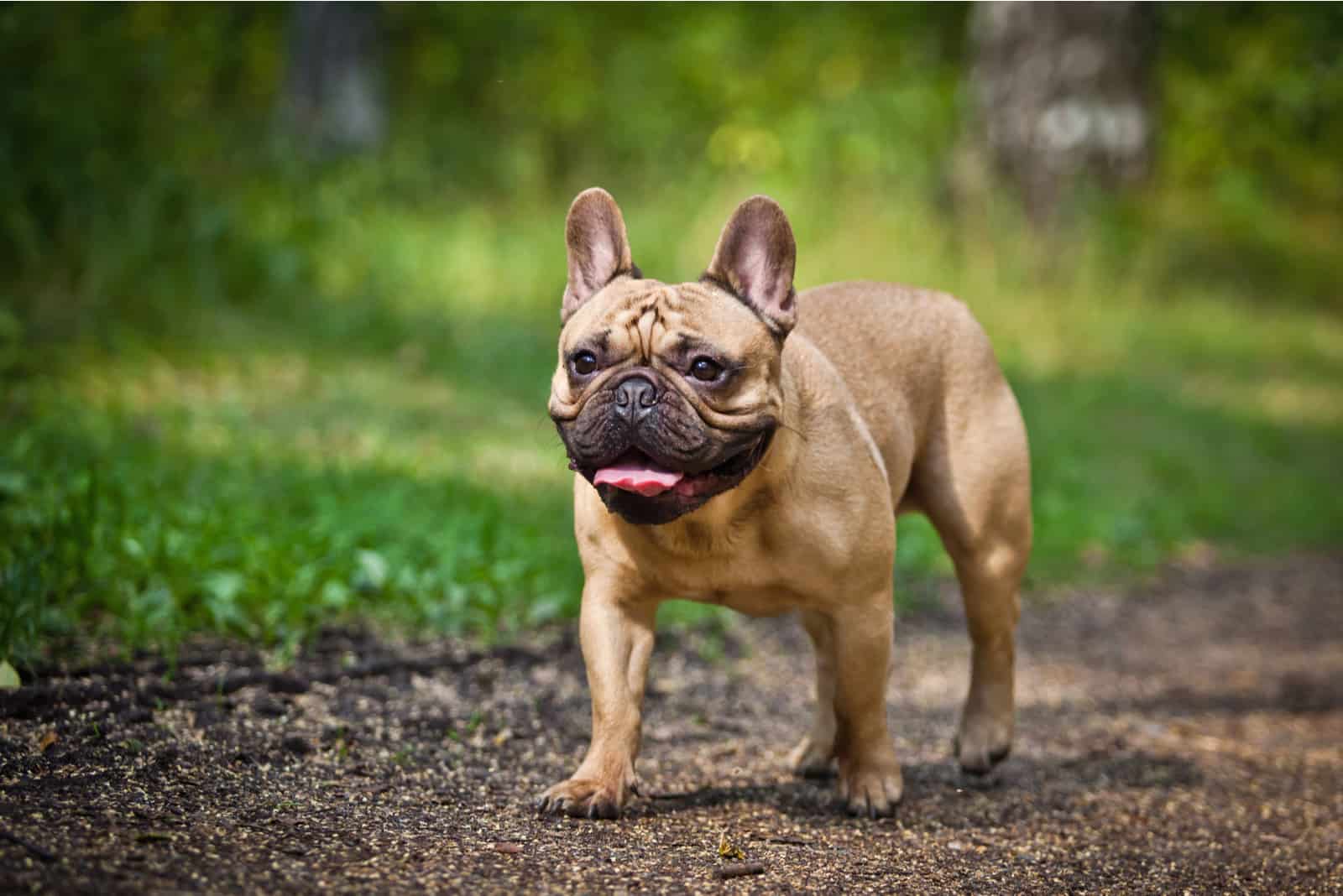 Fawn Frenchies are traditional Frenchies unless they are blue fawn French Bulldogs. This type can come in light brown, dark brown, golden, red, silver, or any color in between.

What makes these pooches so special is the fact there are no identical fawn colorings. Rarely do any two fawns look alike.

As a rule, fawn Frenchies have a black mask or no mask.

These dogs have no brindle pattern since the brindle gene is dominant over the fawn color. A puppy must inherit a fawn gene from both parents to be fawn too. If one parent has a brindle gene, the puppy might come out brindle.

White is a pretty common French Bulldog color, but still very stunning and unusual. A white French Bulldog is, in fact, registered and accepted by the AKC. Meaning, they can participate in dog shows and win one too!

Don’t get confused with their coat color as white Frenchies are pure white, unlike cream ones, which have an eggshell coat color. 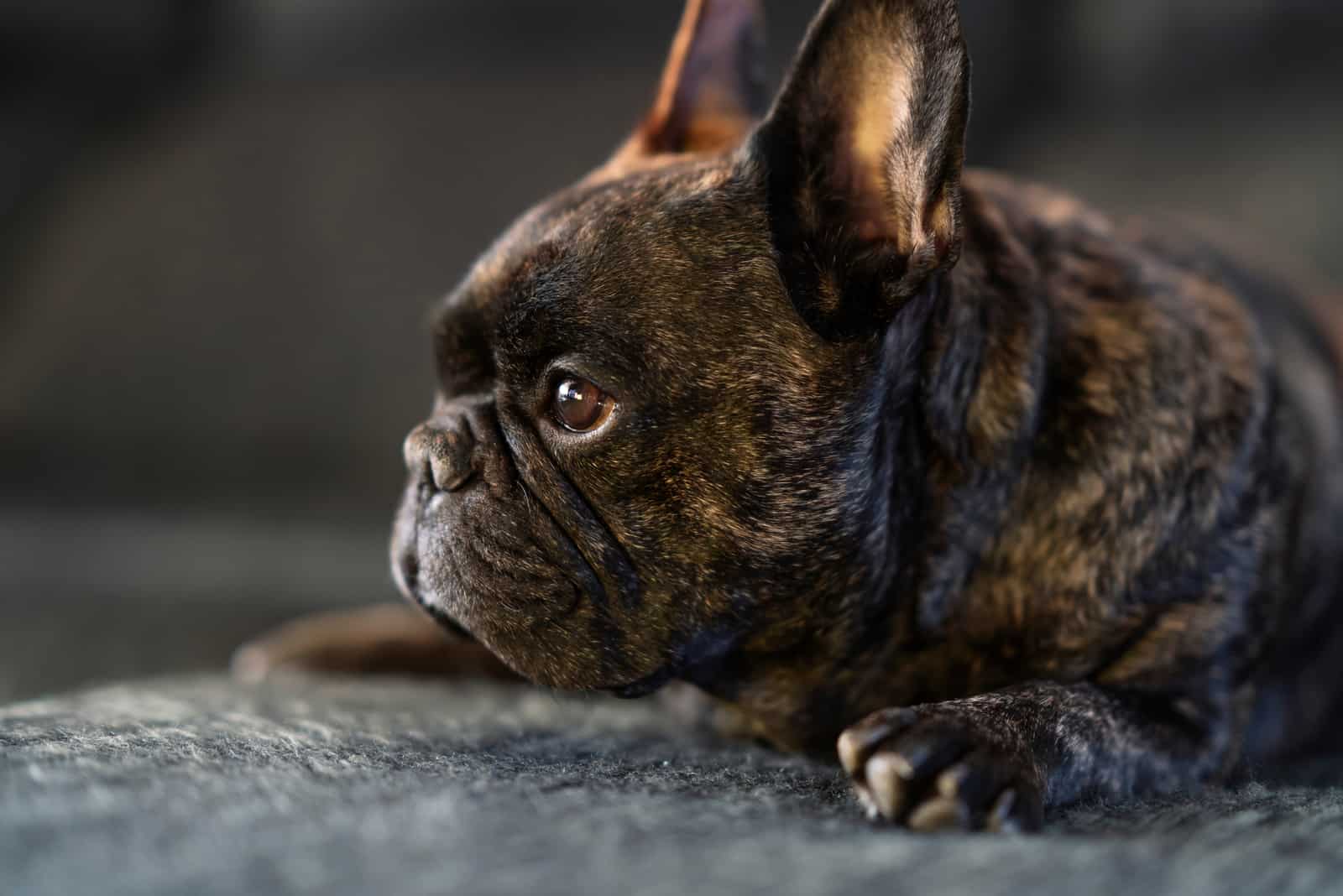 The brindle French Bulldog has a darker coat. It can have various patterns going throughout the coat. We have several types of brindle Frenchies. The most common one, the tiger brindle, has heavy brindle patterns and resembles a real tiger.

Moving on, the seal brindle is also popular. The coat is almost solid in color! The only way you can determine whether your Frenchie puppy will be brindle is to wait six weeks to find out whether the coat will turn brindle. This is around the time a new coat starts to come out.

The rarest brindle is the blue brindle. This pup has a recessive gene because both parents have the blue gene. The blue brindle is caused by a diluted blue pigment causing the coat to look more grayish-blue. It is indeed such a pretty color!

These brindle pups usually have hazel or blue eyes, lighter than all other Frenchies.

A true cream Frenchie will look a bit off-white, more eggshell in color. It’s a recessive dilute from the fawn coat. These Frenchies have no markings on them. They have black noses, black eye rims, paw pads, and black lips. Yes, they certainly carry a black pigment. 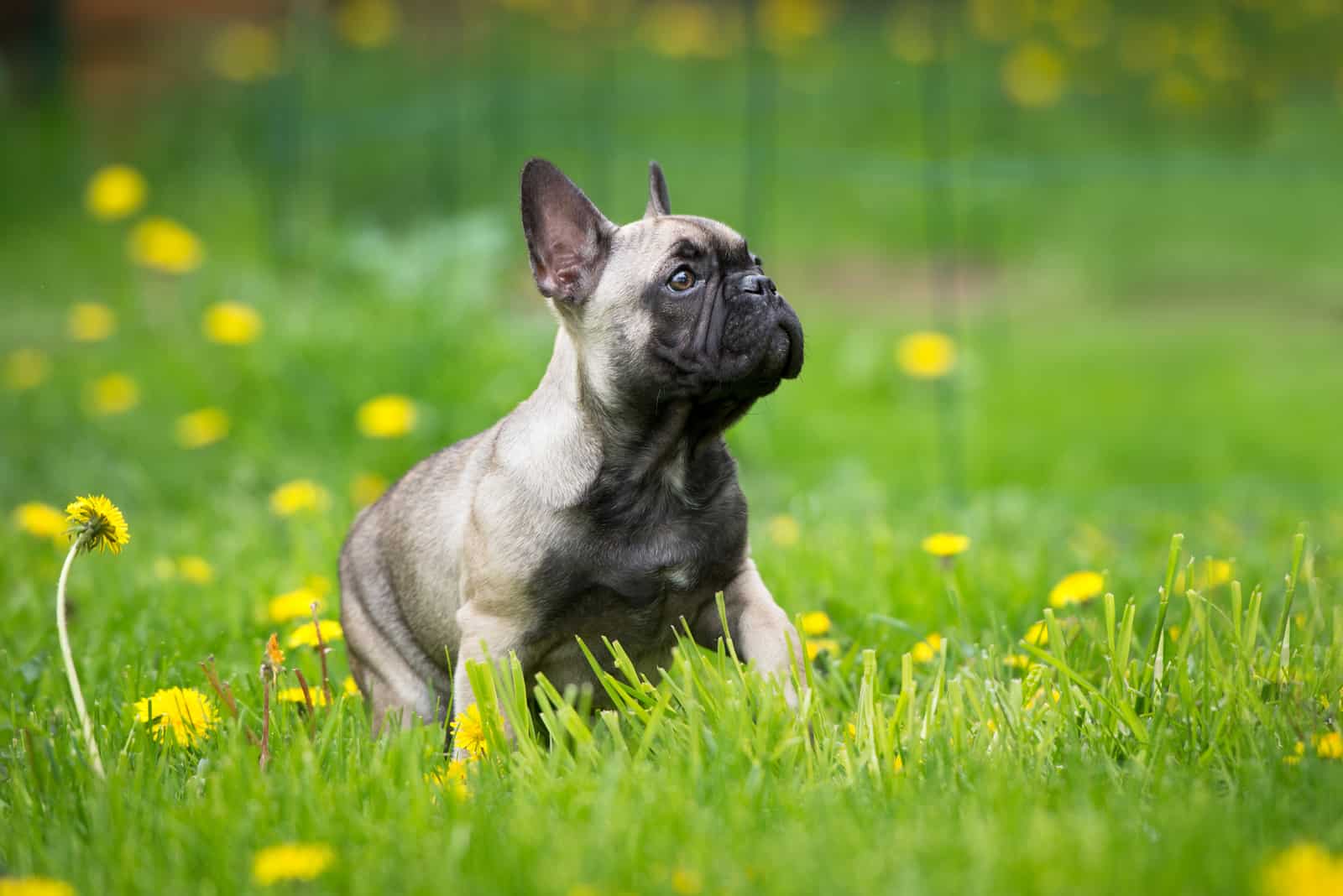 Sable Frenchies are a more rare version of the fawn. They’re under the spotlight now. Their fifteen minutes have come. In other words, the sable French Bulldog is all the rage today.

The sable Frenchie has a fawn coat with black tipping on the fawn hairs. This gives them a washed-tipped look, with fawn being the base. It’s such a lovely and special color option.

One of the most popular sables is the blue sable Frenchie.

Blue sables, much like the other stunning sables, have a fawn coloration on the head and lower legs. Still, they don’t have black-tipped body hairs and black masks. Instead, they have lovely blur-tipped hairs with a blue mask.

A pure black Frenchie is, unfortunately, not recognized by AKC standards. If enrolled in a competition, it would be automatically disqualified because of its color.

The pure black color happens when both parents have the black gene, a locus, which is exactly why these pups are so rare. Their rarity and beauty, of course, is what makes them so pricey. In case you’re wondering, they also come in black pies, which is another cute color choice. 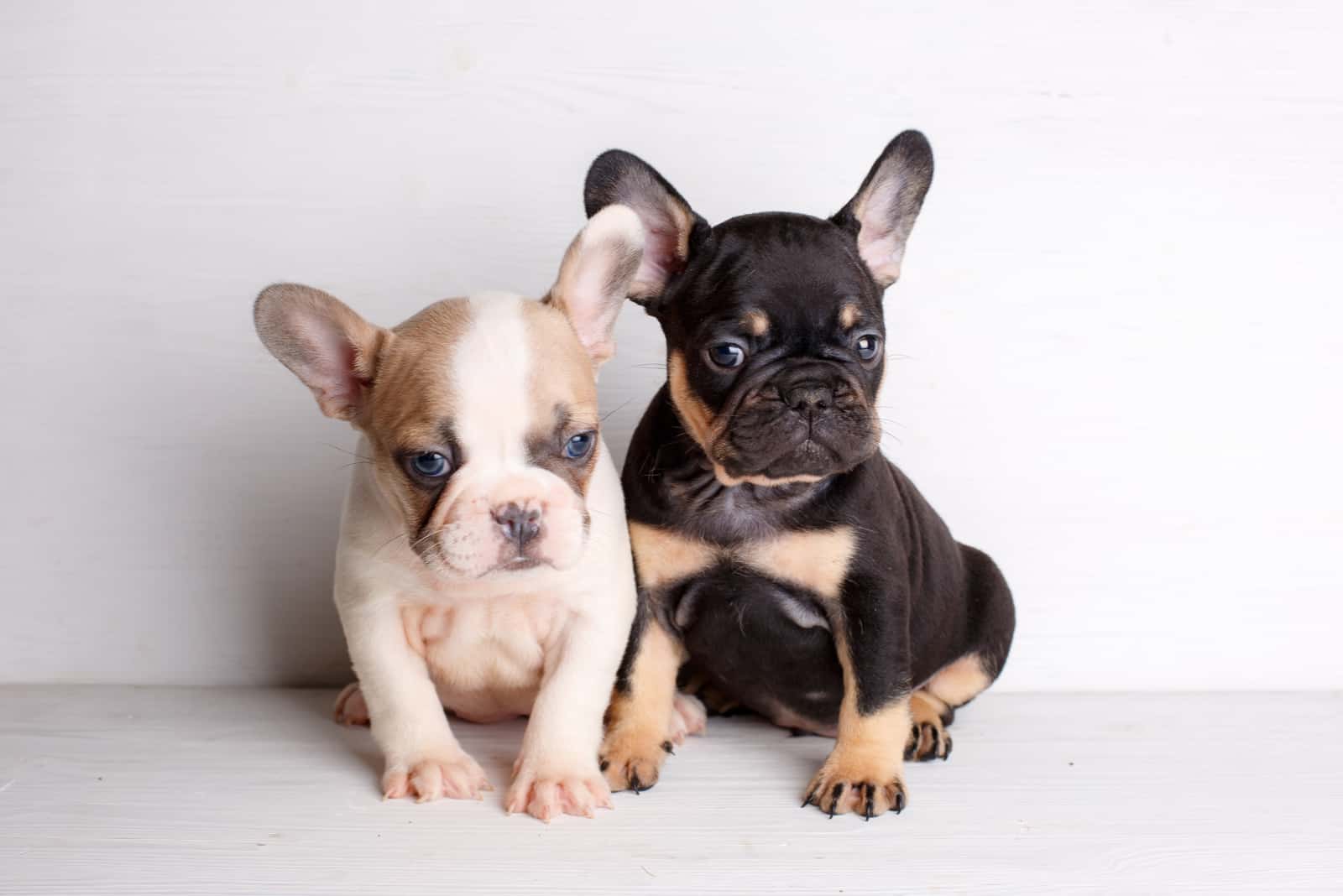 Surprise, surprise: black and tan French Bulldogs are also not recognized by the AKC.

However, that doesn’t change the fact black and tans are quite rare and beautiful. Their coat is sleek and shiny black without any brindle. They have gorgeous tan points, mostly above the eyes, cheeks, and lower legs.

The contrasting colors, black and tan, go great together.

Blue and tans are quite similar to black and tans, but there’s a dilution happening here. The blue gene is the diluted one.

However, these pups are magnificent! Their beauty surpasses all standards. It doesn’t matter if the AKC recognizes them or not. The blue and tan and black and tan are so high in demand it’s unbelievable! Not often is any rare color as desirable as these two. 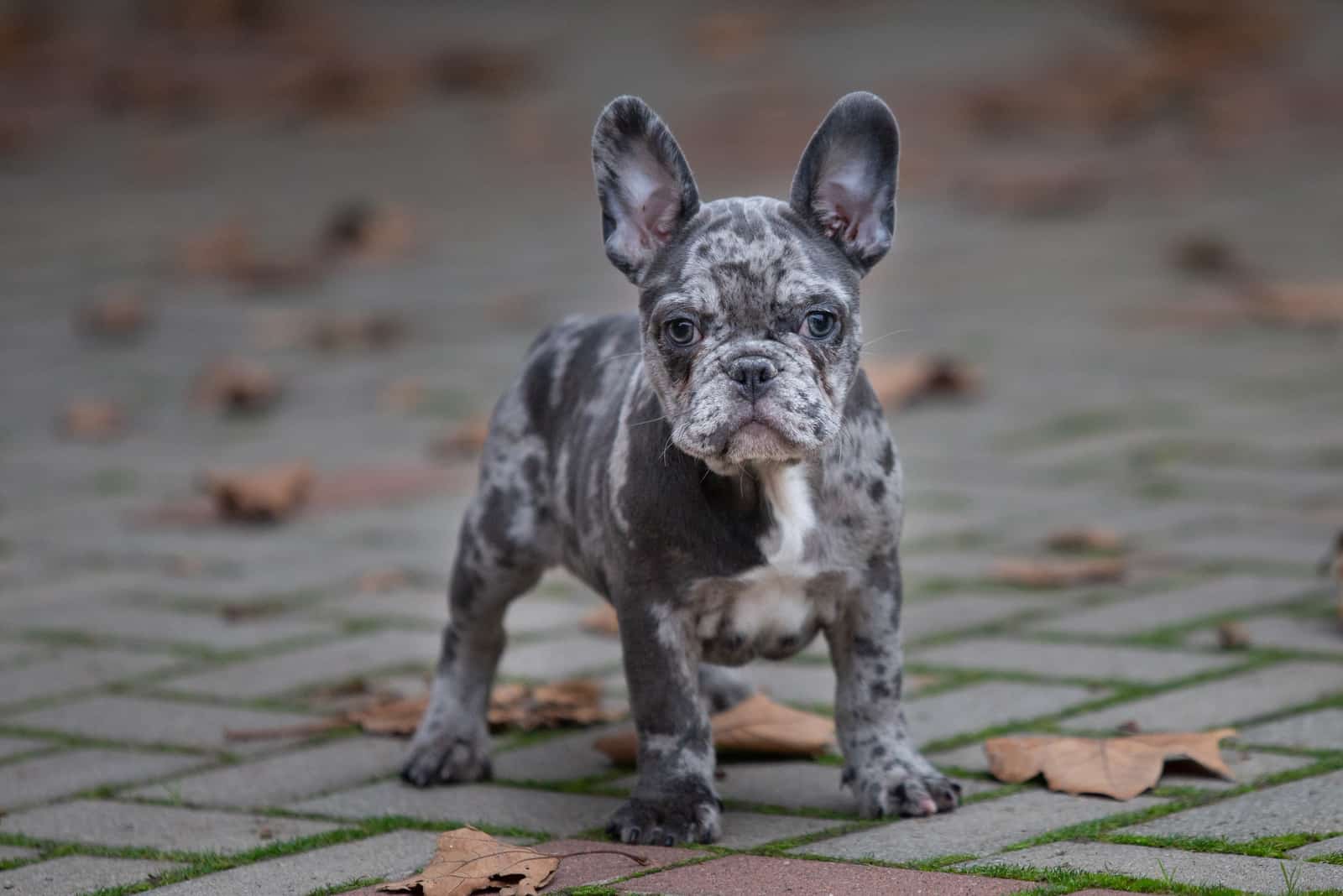 A merle French Bulldog has a show-stopping coat pattern.

While standard Frenchies have a solid color coat, merle dogs have a base color with patches of irregular or regular spots and stripes. It can consist of a few different colors. Those are the exact reasons why merle French Bulldogs are so desirable.

The merle coat comes from a dominant gene that gets diluted by other genes. The final result? A lovely pattern that gives us lilac, blue Frenchie, and black merle.

Indeed, getting to know all of the Frenchies and remembering their traits can be pretty hard. So many options to choose from: from short-haired Frenchies to long-haired ones! In fact, it can be absolutely troublesome for any new dog owner. But, before you buy a Frenchie, you need to pick one first.

Which one of these lovely pups is going to be your choice? Brindle, fawn, black, or the especially beautiful sable French Bulldog?

The French Bulldog breed is a breed that offers MORE.

Read Next: Dog Colors 101: An Introduction To Doggy Shades And Patterns 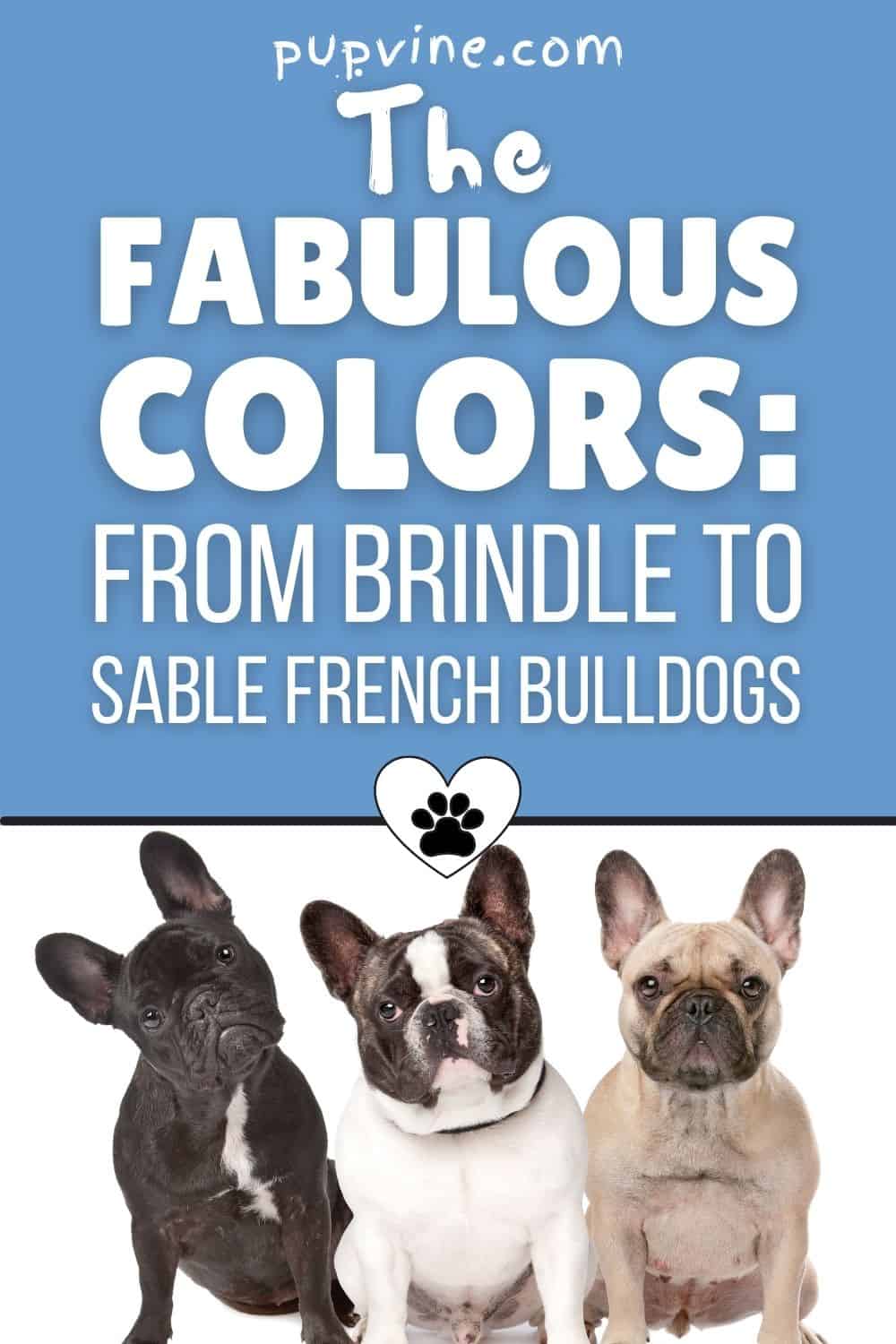 The Red Boston Terrier - An Ultimate Guide About This Dog

[…] 25 pounds in weight. This dog belongs to a family of brachycephalic dogs (e.g., English Bulldogs, French Bulldogs, Pugs, Boxers, Shih Tzus, and others), which are breeds with shortened […]

The 7 Best French Bulldog Breeders In Ontario in 2022

[…] Frenchibles offers puppies that come in colors of lilac, lilac fawn, chocolate, and […]

The Top 5 Most Reliable French Bulldog Breeders In The UK

[…] Their goal is to produce top-quality, healthy, and happy Frenchies with sound conformation and sweet temperaments. They offer Frenchies of brindle, merle, pied, cream, and lilac colors. […]

Are French Bulldogs Hypoallergenic Or Not?

[…] are dogs with short hair. They’re super silky soft and sleek, and come in all sorts of Frenchie colors including blue, chocolate, sable, cream, piebald, […]