We all know how our favorite Frenchies look. They are small dogs with a fawn, cream, brindle, or white coat, and a flat nose.

But did you know you can find a chocolate French Bulldog, as well? Or even a lilac one?

While the AKC only recognizes a few types of French Bulldog, this dog breed comes in many different colors and fur patterns.

If you want to learn more about the rare coat colors Frenchies could have, you’re in the right place! One of the main reasons why French Bulldogs are so loved worldwide is not just their cute appearance but the wide variety of coat colors they come in. But why are some shades more common than others? The answer is:

• Combinations of these colors

However, this doesn’t mean a Frenchie can’t come in any other color. In fact, some of the most sought-after pets are blue, merle, or even a chocolate French Bulldog.

How do genetics affect their fur color, and can you predict what color Frenchie puppies will be? 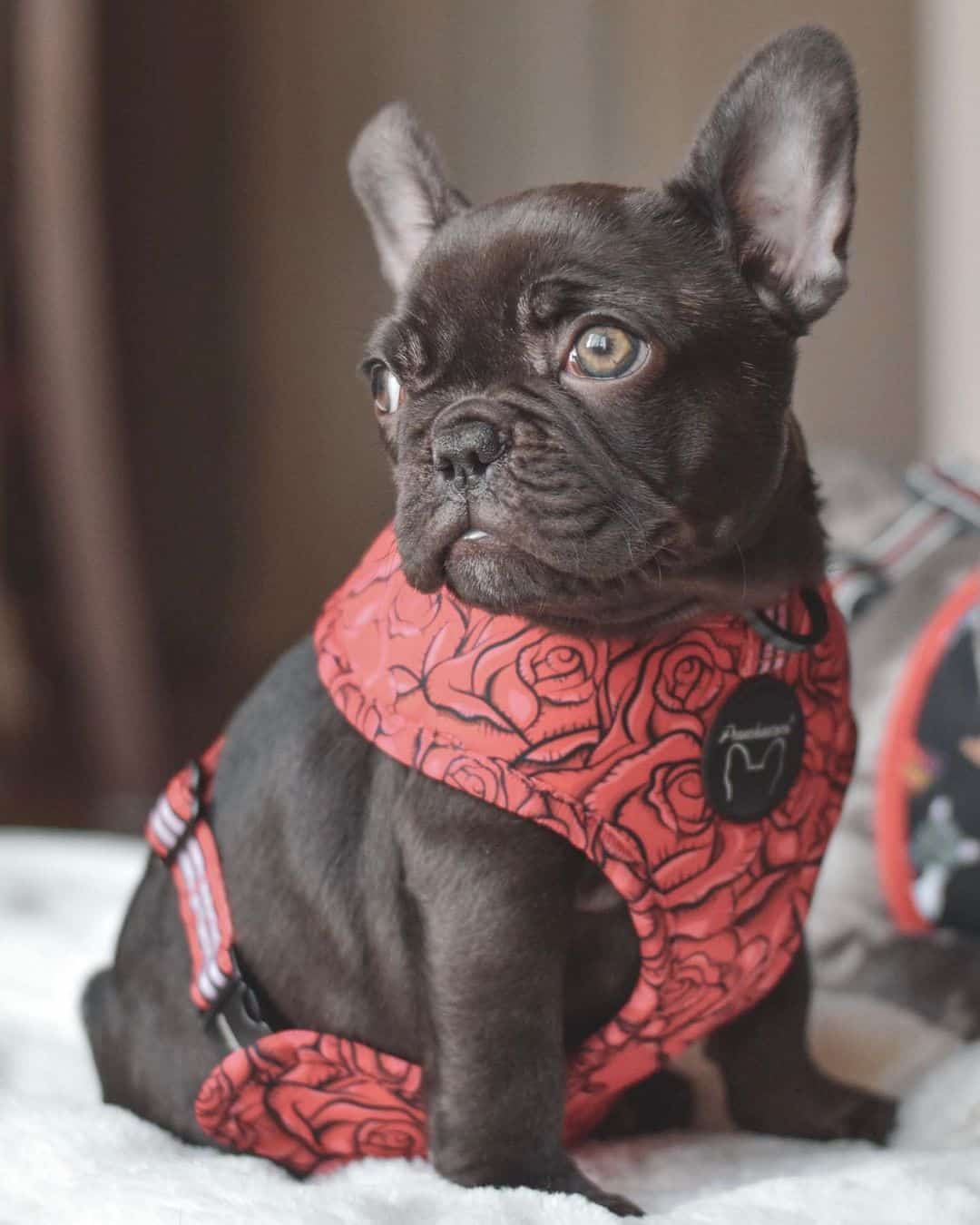 Each color, as well as color pattern, has its own little box within a big box that makes up a dog’s color pallet. This pallet is called a locus – which means ‘location.’

Each locus has enough space for two of these little boxes, called alleles. One allele carries one color.

When two alleles join together inside one locus, they determine the French Bulldog colors. In other words, these two boxes carry genes that, when mixed, create the unique shade of the coat of your pooch.

If you’re looking to purchase a Frenchie and notice the breeder wrote down some letters next to his puppies, these letters showcase each dog’s unique color genetics.

For example, in the case of a blue French Bulldog, his alleles will look like this: (d/d). Both little ‘d’s represent one small box (allele), and the parenthesis represents the big box (locus).

In the case of said blue Frenchie, he carries two alleles for the blue fur color – but more about that a later on.

You may also notice that some dogs have one big letter or even two big ones. The letters’ size is letting you know whether the said allele carries a dominant or recessive gene.

For a recessive gene to be expressed in a French Bulldog’s coat, he needs to have two alleles for that color.

The locus needs to have both of its little boxes carrying a recessive gene. For example, the (d/d) combination we’ve mentioned above.

On the other hand, if your pup only carries one copy of a recessive gene, this means the said color won’t express itself – for example, (D/d).

When you have a dominant gene, you only need one copy of it for the color to be noticeable on the fur. In other words, if a dog carries one dominant and one recessive gene, his coat will showcase the color of the dominant gene.

What Coat Colors Are Out There? French Bulldogs come in over 20 different shades and fur patterns! This is because of the massive number of alleles that make up its genetics. Below are all the colors that your pooch can come in and what genes are responsible.

This is a rather common Frenchie pattern.

A dog with this pattern has a fawn base coat through which black hairs extend, producing a fur ranging from a tiger pattern to the more common dark brindles.

The light version where fawn hairs predominate is also called the “reverse brindle,” and it isn’t as common as the darker one.

This design is created thanks to the dominant (K) allele. Only one copy of this gene is enough for your dog to have this pattern.

This is yet another common pattern in French Bulldogs. Piebald Frenchies have white fur with plenty of big, darker spots.

This pattern is caused by the recessive pied allele(s), meaning it takes two copies of this gene for the design to express itself on the coat.

A chocolate French Bulldog is very rare. It is determined by the chocolate/brown allele (b). As this is a recessive gene, the dog needs to inherit it from both of its parents.

These Frenchies’ eye color can vary from green and golden to brown, and even bright yellow in color! This is one of those Frenchies that attracts the most attention. They are very rare in the French Bulldog breed – so much so that it is hard to find a reputable breeder.

If you plan on getting one, make sure its parents don’t have any severe health issues.

Of course, the pigment itself can’t affect the health of the puppy. However, to keep the color, breeders often make these dogs breed with their cousins, increasing the chance for many genetic issues.

The blue color comes from an extremely rare dilute allele (d), a recessive gene. This gene also influences the eye color, so most blue Frenchies have blue or grey eyes.

Cream Frenchies are often mixed with white as their fur looks very similar at first glance. Despite this, there are a few ways to distinguish them.

While white French Bulldog puppies have pink eye rims, cream-colored ones have relatively darker rims and lips. Also, cream Frenchies have an eggshell-colored shade to them. The American Kennel Club accepts both color variations.

While black and tan isn’t a rare combination in many dog breeds, it is rare in French Bulldogs. These dogs have pitch-black fur with tan points above their eyes, on their cheeks, bellies, as well as inside the legs. These tan markings can vary from white and cream to even ginger.

The genetics behind this breed is somewhat complicated. It stems from the agouti (a) allele, responsible for both the recessive black and the tan points (at).

This is a unique color when it comes to Frenchies. While the AKC doesn’t recognize it, black French Bulldogs do exist, and they are very sought-after.

Most pure black Frenchies have the recessive (a) allele since the dominant black (K) allele creates a brindle pattern. In most merle French Bulldogs, a cream, white, or fawn color is dominant, joined by black or dark brown markings.

A dominant gene makes merle markings. This means that just one allele is enough for a merle pattern to express itself.

Keep in mind that most merle French Bulldogs are usually not purebred but are made after crossbreeding with Chihuahuas at some point in their past.

A young lilac puppy can be mixed with a blue one, especially before the newer testing methods. The red-eye glow test used to be conducted on these pups to determine if the pooch will be blue or lilac, as it detects the copy of chocolate allele.

These dogs are silver when born, and they stay very light even as adult dogs. Their eyes are usually yellow, blue, or light brown in color, giving this dog a rather gentle look.

Blue and tan Frenchies have a blue base with markings on their cheeks, legs, bellies, and above their eyes, which can vary from fawn and cream to white.

These pups carry the recessive dilute gene (d) and are very rare. This makes them quite desired among breed lovers. This color variation makes a Frenchie pup look a bit like a miniature Bulldog. It comes in cream or light brown color, with white or cream markings on its chest. This Frenchie’s eyes are bright, and they come in a yellow, green, light blue, and grey color.

These dogs’ skin is pink and very sensitive, as you can see on their noses, eyes, and mouth. You have to take excellent care of them, especially in the sun.

Sable Frenchies have a noticeable reddish pigment combined with standard fawn coloring. They come in darker and lighter shades, but all have black-tipped hairs.

Their coat is pretty unique-looking, and the particular sable version of the agouti allele (ay) is responsible for it.

There are several variations of a fawn Frenchie. These dogs can range anywhere from reddish, golden, and light tan cream. There is even a blue fawn color variation, which is quite rare.

Surprisingly, fawn Frenchies have the same color DNA as sable Frenchies, as the agouti (ay) allele makes both shade distinctions.

Why Are Chocolate French Bulldogs Unique?

There is one thing that makes a chocolate French Bulldog unique amongst its peers. The (b) allele is like no other. In fact, it even has its own name – the “Frenchie chocolate.”

This is the only color allele that a dog, up until recently, couldn’t be tested for because a proper DNA test didn’t exist.

Normally, you could ask a breeder to get your future Frenchie pup tested to determine his color genetics.

While genetic testing for color DNA is complicated on its own, things get even more complex when you have a chocolate French Bulldog.

There are four ways your dog might carry a chocolate gene; three of those you can test on the B locus, while the fourth one can be tested through Vet Gen as of recently.

If you tested your dog before 1/31/20, chances are the results showed: “(B/B): Doesn’t carry brown – can’t have brown offspring.” Considering you have a chocolate French Bulldog, this probably confuses you.

This result only meant your dog carries alleles for a non-testable chocolate gene – or rather, a gene that wasn’t able to be tested without these new methods.

Another way breeders used to test for brown genes was through red-eye glow testing. If the pup carries two copies of the “Frenchie chocolate,” his eyes will reflect either red or orange when the bright light shines on them.

So, yes, there was a way to find out the dog’s fur genetics by looking at his eye color. This unique way of testing is now slowly being abandoned. Depending on the genetics, French Bulldogs can come in a considerable number of colors and patterns.

Not to mention how every coat design can be in almost every color combination possible! Knowing this, it’s easy to see why Frenchies are among the most popular dog breeds.

The chocolate French Bulldog is the most special of them all, considering how its genetics were untestable until recently.

This gene is still somewhat a mystery, making this color very desired among breeders and dog lovers alike.

It is hard to determine what a Frenchie puppies’ colors would be. If this is important to you, you can always ask for DNA tests to see what your dog will most likely look like.

Just don’t be surprised if the result isn’t 100% what you expect it to be. Genetics can be complicated. 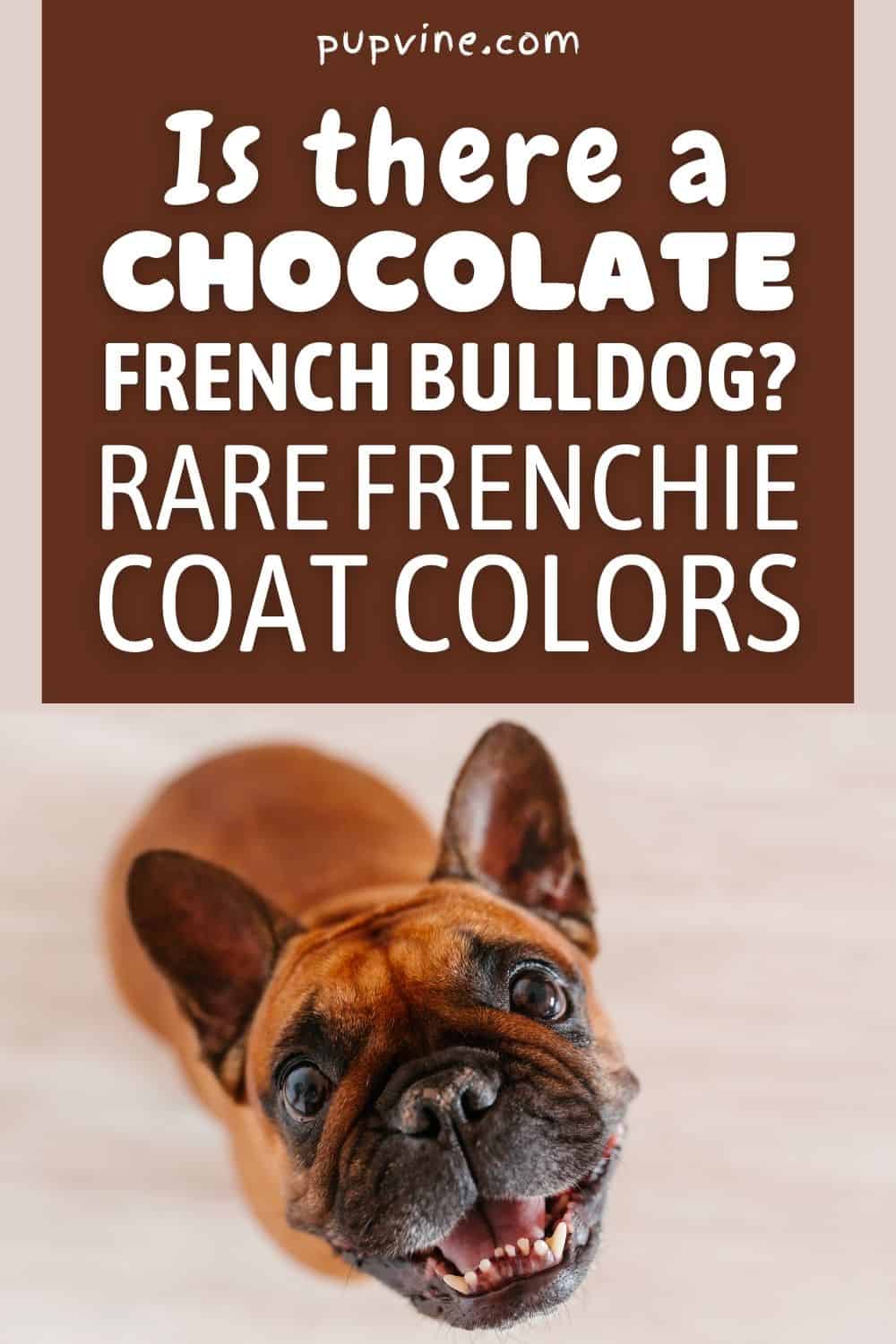 The 10 Best Dog Breeders In Arizona

Male Vs Female French Bulldog: Which One Would You Choose?

French Bulldog Feeding Chart: How To Keep Your Frenchie Fit

[…] Chocolate, piebald, sable, cream, or black and white… all French Bulldogs should be fed with high-quality food in correct amounts. […]