They are non-sporting dogs with strong will and loyal hearts. And, they are adorable and cuddly!

But, what do you need to know before getting one?

Here are all the facts.

Breed Information- What Is a Merle French Bulldog? 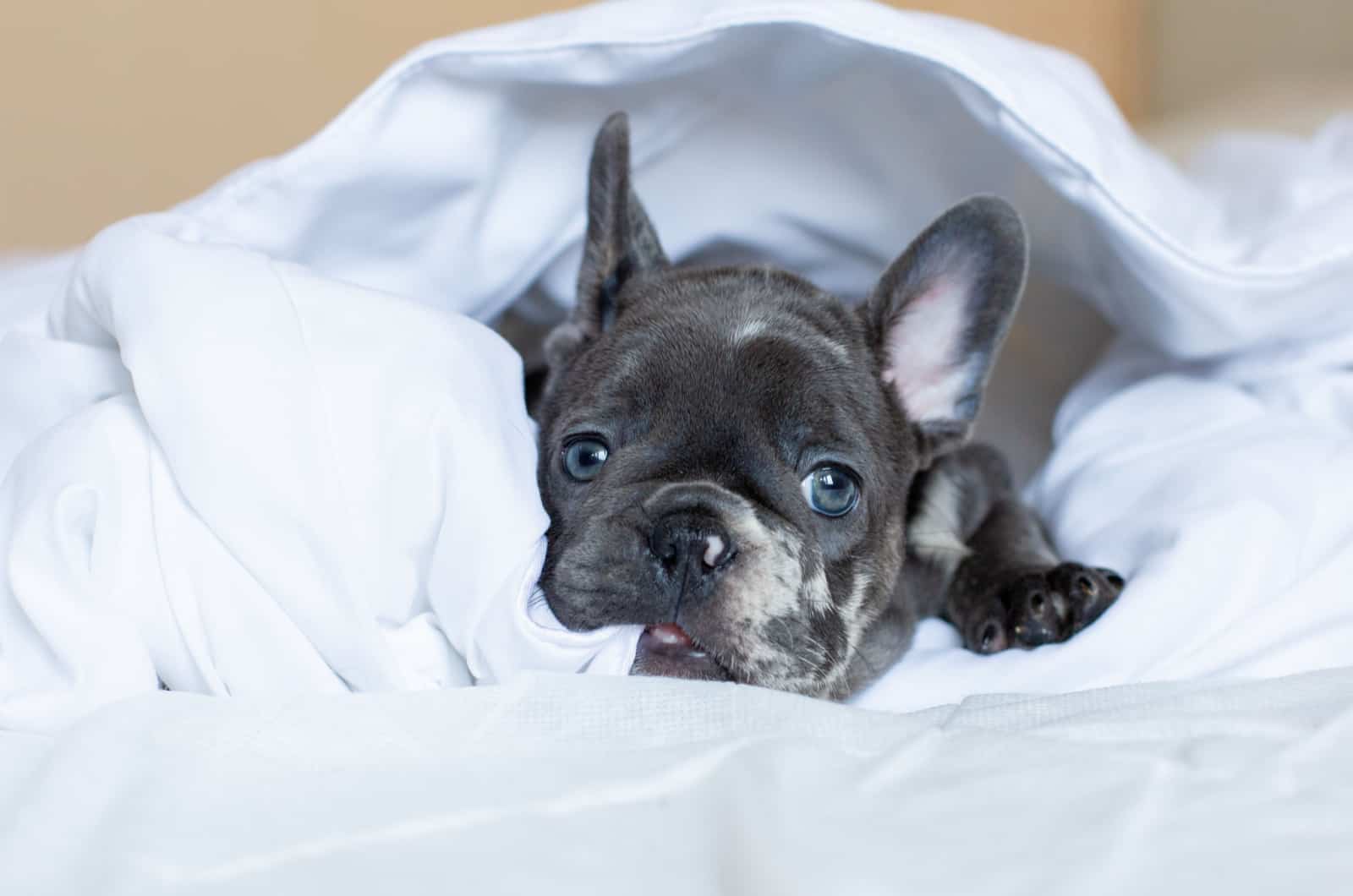 French Bulldogs surprisingly do not come from France. They were originally bred in England, in the 1800s.

They mixed the dwarf version of the English Bulldog, a pug, and a terrier – et voilà a French Bulldog.

Why the name French Bulldog? When the original breeders moved from England to France, they took their Frenchies with them. Their popularity rose them to fame, and they got their permanent name – the French Bulldogs.

They are fantastic companion dogs! Frenchies are small and they don’t need a lot of exercise, so they are perfect for apartment living situations.

When we say they are companion dogs, we mean it! Take them to your everyday errands, they won’t mind! They love to be near you and are very affectionate to their owners.

The term merle refers to a specific coat pattern – mottled or smeared patterns with different colors.

According to the Kennel Club UK, the Merle French Bulldog is not recognized.

The reason they give for this is a lack of successful tradition with well-established and careful methods of breeding merle dogs, and hence they reject the registration of such dogs.

The AKC (American Kennel Club) does recognize this color, but they are not registered as a standard breed color.

So, Merle Frenchies are standard French Bulldogs with unique and beautiful coat colors.

They have all the temperament traits of a French Bulldog:

They also get along with other animals and their friendliness makes them great family pets, too.

Frenchies don’t bark often – but they are very alert and will bark when there is something or someone at the door.

But, being a Frenchie means that they cannot swim!

Their flat-nosed faces and heavy bodies, in proportion to their legs, prevent them from being able to swim properly, which can be fatal. They have an instinct to swim, as do all dogs, but they physically cannot do it.

So, it is extremely important to keep your Frenchie away from water (pools, spas, etc.) or make sure they have their life jacket on. 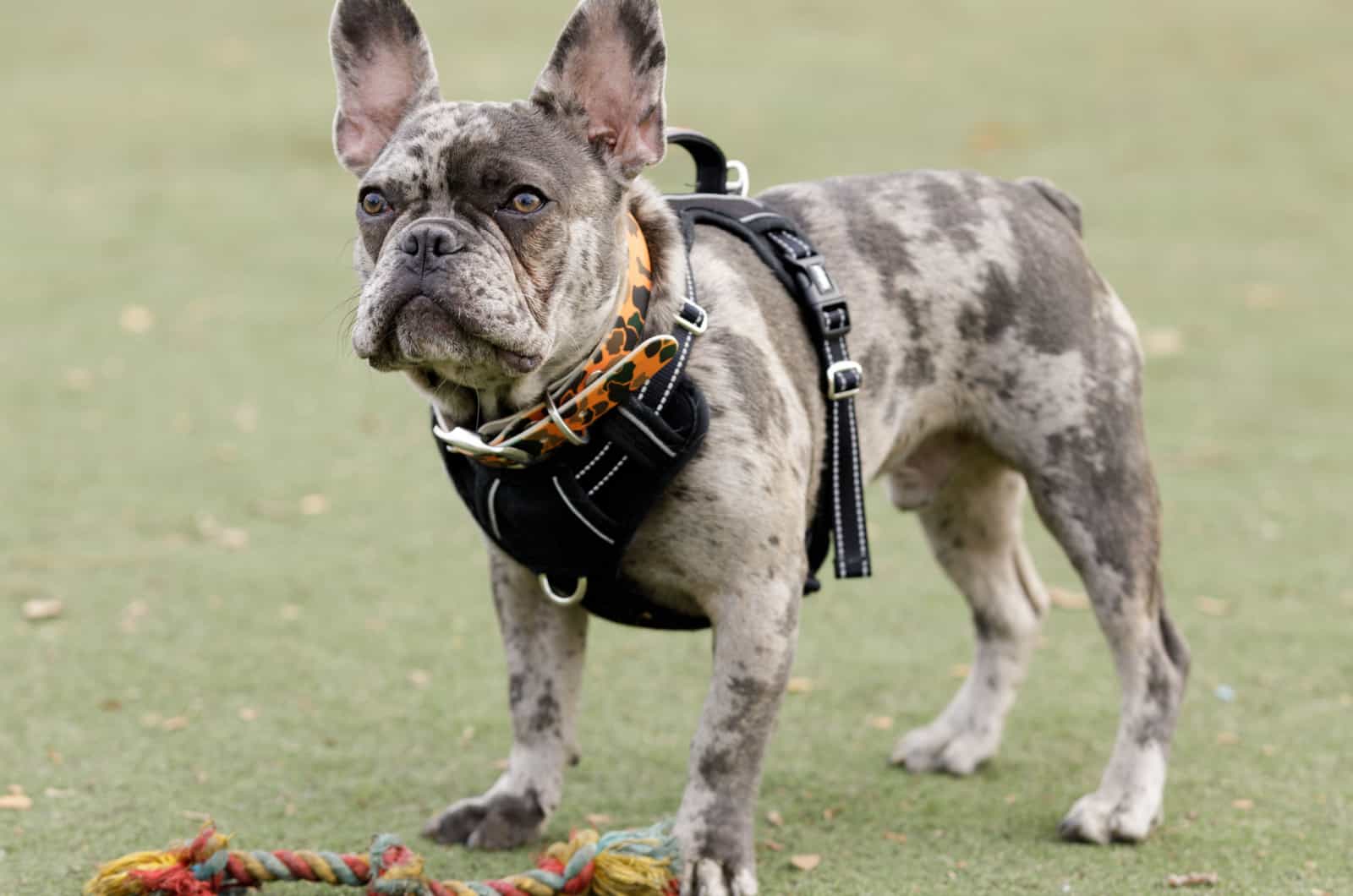 Merle French Bulldogs are included in a non-sporting group.

The AKC standards require all French Bulldogs to be of a compact appearance, with muscular and heavy bone substance.

Ears: pointy, so-called bat ears, wide at the base

Muzzle: broad with jaw muscles well-developed, strong wrinkles over a short nose; the underjaw is also broad with an undershot (underbite)

Neck and Body: the neck is thick and the body is well-rounded and short with a broad chest

Tail: small tail, it can be straight or screwed

Legs: strong and muscular with hindlegs longer than the forelegs

Standard purebred French Bulldogs, accepted by worldwide Kennel organizations, come in one of these coat patterns:

If you want to be sure what color your french puppy is, you can take it for a DNA test.

As for merle coat patterns, they can be seen in other dog breeds. For example, Border Collie, Great Dane, Shetland Sheepdog, etc.

The “merle gene” is responsible for these rare colors and patterns, and a dog can either have the merle allele or a non-merle allele (an allele is a variant form of a gene).

The merle allele is simply called an M allele.

In all dog breeds, genotype and consequential phenotypical expression depend on recessive and dominant genes.

Simply put: the genes we inherit from our parents define our looks (phenotype).

When it comes to merle color, the pattern depends on the presence of the M allele in both parents.

Double merle dogs usually have a lighter base coat and just a few patches of the original coat color pattern. In some cases, they can be entirely white.

Now that we know a thing or two about merle’s genealogy, let’s talk about Merle French Bulldog colors. 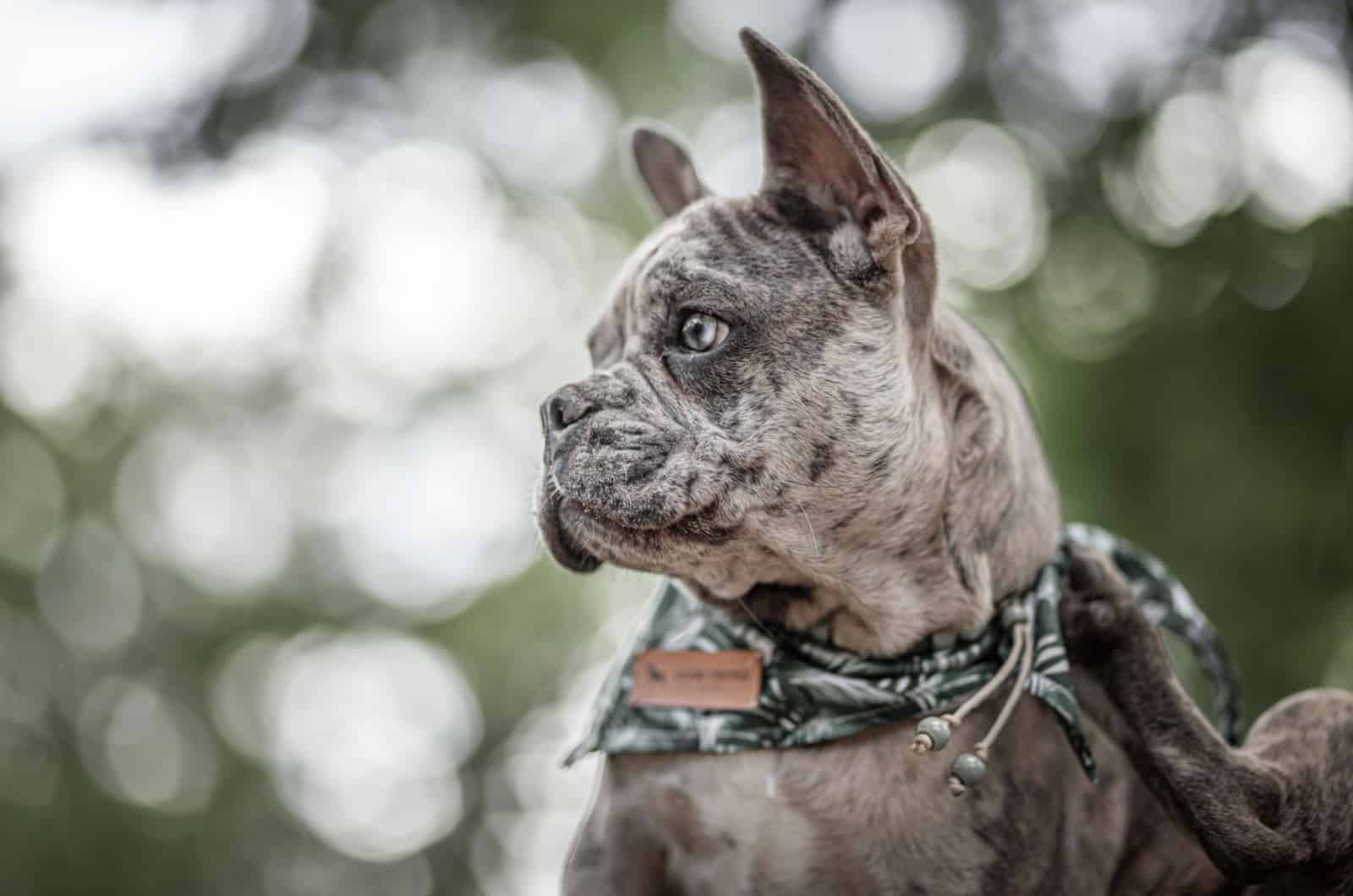 Merle French Bulldog puppies with this color are very expensive, in spite of the fact that they are not officially recognized by the AKC.

And, on top of that, they are the only Merle French Bulldogs that keep the blue eye color into adulthood.

A Brindle coat pattern is often called a “striped” pattern and it means that there are two layers:

underlayer or base coat is usually of lighter color

the top layer is darker and it can be black, brown, or a mixture of the two

Upper layer patterns swirl or go in tiger-like stripes all over the base coat.

If you are looking for a unique Frenchie, you can’t go wrong with one of many Brindle Merle French Bulldog coat color variations.

The name of this beautiful color is said to originate from the story of the Spanish princess Isabella Clara Eugenia.

The Isabella color is also used to describe the color of horses and birds, and just like Isabella Frenchies, these animals are very expensive..

Isabella Frenchies can be pale chocolate, pale-cream, pale-brown, or golden.

Lilac Merle French Bulldogs are similar in color to Isabella Frenchies. Most people use the term interchangeably, but there is a slight difference between these two colors.

Lilac French Bulldog doesn’t mean the dog is truly lilac-colored or purple. It means they have the lilac hue on their coats and compared to Isabella Frenchies, their coat colors are much darker toned.

This type of color comes from the dilution gene which makes the liver-colored coat become lilac.

Blue Frenchies got their color through the dilution gene working on the black coat.

These Merle French Bulldogs have a black coat with light brown or light gray patches, as well as tan, brown, or fawn.

But, this doesn’t mean that they are not expensive!

As a matter of fact, all Merle Frenchies are quite expensive, and the black variation is not an exception.

Because of the M allele and its variations, for example, its location in the DNA chain, and presence either in both parents or just one, there are numerous coat color and pattern variations.

But, out of all the colors, black, blue, and fawn are the most sought after, and are also the most expensive. 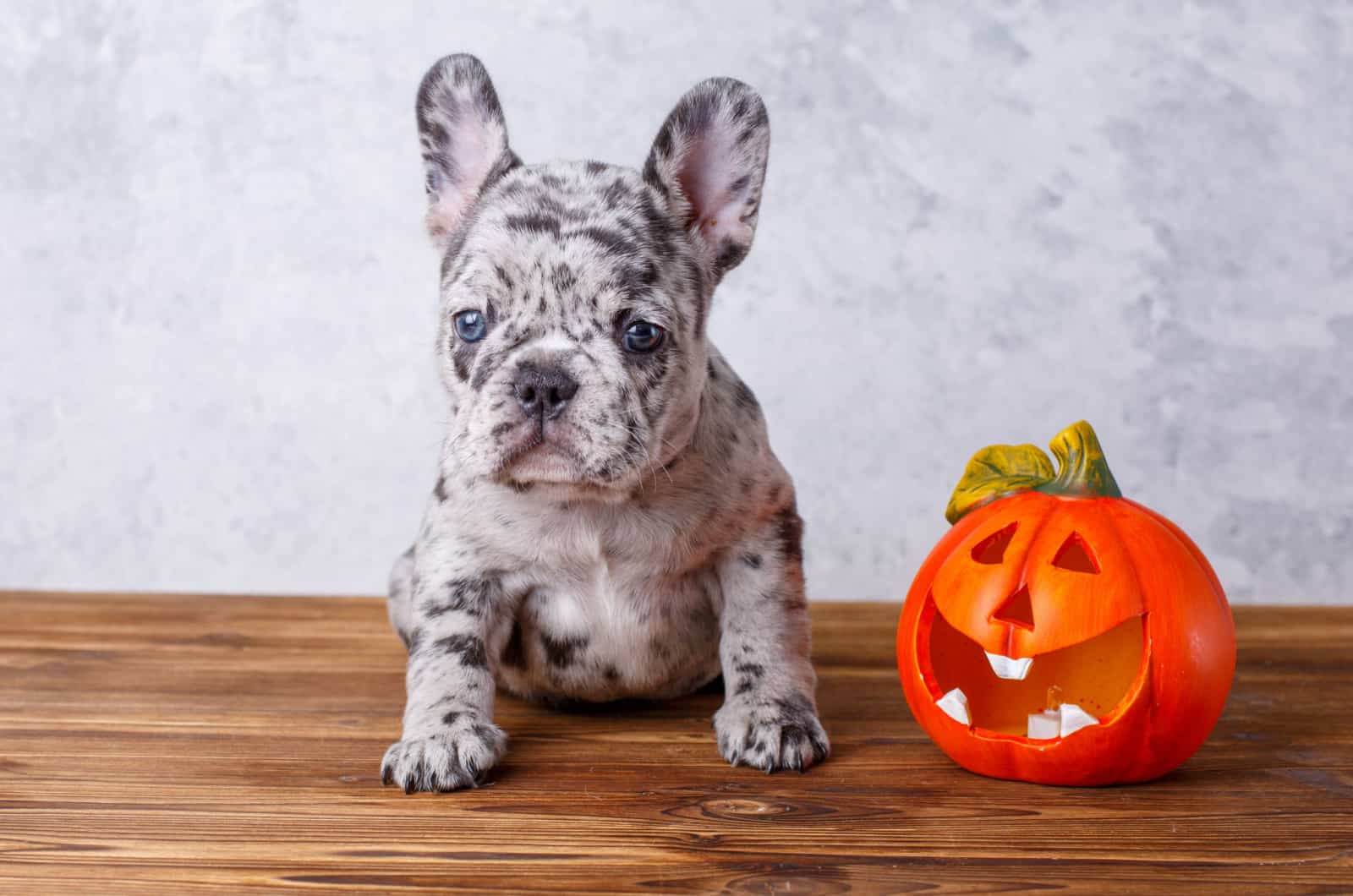 Just like any other flat-faced dog breed (or brachycephalic dog breed), they have some breathing issues.

During exercise, especially in warmer weather, a Frenchie puppy can quickly overheat.

Taking them to a cooler setting and allowing them to calm down solves the problem.

Because of their short noses, they can have upper respiratory problems as well.

Allergies are quite a common health issue in French Bulldogs. They can be allergic to food, grass, shampoo, or fibers. Taking your dog to a vet is a solution. The veterinarian can give proper medication to your sneezing or itching Frenchie.

Another common skin issue is skin fold dermatitis or the inflammation of the tissue in and around the head wrinkles. Regular cleaning of the wrinkles with a soft cloth prevents these issues.

Eye problems are also common, including cataracts and glaucoma.

Recognizing the early stages of these diseases can immensely help with getting the proper treatment.

Hip dysplasia and luxating patella are some of the most common mobility issues. These health problems have to be diagnosed professionally through x-rays and often require surgical treatment.

Is it An Issue To Breed Merle French Bulldogs?

When it comes to breeding Merle dogs, a lot of people find it controversial.

The controversy might come from a lack of information, dealings with less responsible breeders, or general misinformation.

If a dog inherits M alleles from both parents, they are called “double merles” and can have some health issues.

The most common health issues are deafness (or hearing impairment) and blindness (or visual impairment.

Because of these possible health issues, most Kennel clubs forbid merle to merle breeding, hence the controversy behind breeding Merle French Bulldogs.

However, the Merle Frenchie is a generally healthy dog breed.

But, because of the Frenchie anatomy, they have serious reproductive problems.

They have to be artificially inseminated because of their anatomical disadvantages. Simply put, they need help because the male has too weak legs and too narrow hips to mount a female.

Also, because they have large heads and a small rest of the body, female French Bulldogs can often have problems birthing puppies. This happens because the birthing canal is not big enough for the puppy’s head to go through. C-sections are a must in these situations.

But, french bulldog breeders know these issues, and if they are responsible they will make sure the dogs do not suffer and have the best possible care when it comes to any issues.

How Much Does A Merle French Bulldog Cost? 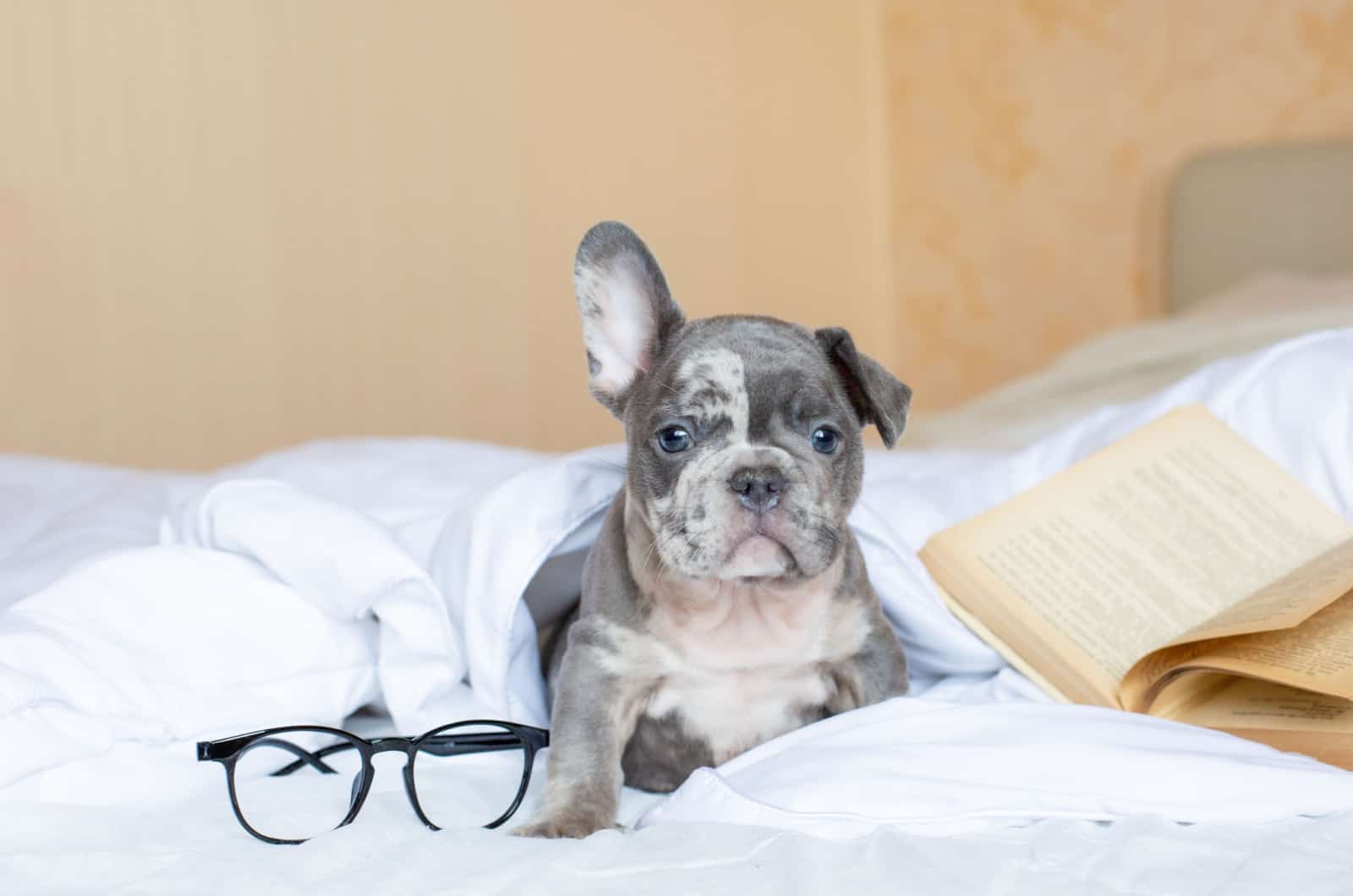 Merle French Bulldogs are one of the most expensive non-sporting dog breeds.

They are more expensive than standard French Bulldogs, and their price can range from $8000 to $30000.

They are a rare variation of an already very popular dog breed, often considered exotic because of their unique coat patterns.

Their friendly nature and adaptability to all living quarters make them even more desirable.

So, the price is something you’ll have to accept if you are looking for a true purebred Merle French Bulldog.

Merle French Bulldogs are loving and fun pets to have, with unique coloring and overall looks.

They will not disappoint you and will follow you loyally through any situation in your life.

But, if you are looking for a dog breed to go on long hikes or a running partner, a Frenchie might not be for you.

They are playful, but their anatomy makes them prone to breathing problems that occur during activity.

If you are looking for a loving companion that follows you everywhere, from work to laid-back Sundays at your home Merle French Bulldogs are the right choice!

Chocolate French Bulldog: All On This Rare Coat Color

[…] Frenchie can’t come in any other color. In fact, some of the most sought-after pets are blue, merle, or even a chocolate French […]