The Lilac English Bulldog is one of the most unique dog breeds in the world. This adorable looking pooch is a true show stopper.

Nowadays, many new homes are opening their doors and inviting these dogs to be a part of their lives.

We all want something no one else has, even when it comes to dogs! Lilac English bulldogs aren’t something you see on every corner.

But, do you actually know what lilac looks like? Sure, it is some kind of a purple color, but there’s a whole science under his coat.

Contents show
1 The Origin Of The Breed: The History Of The English Bulldog
2 The Breed Standard: Does AKC Recognize Lilac Bulldogs?
3 Appearance: Know How To Recognize An English Bulldog
4 The General Overview Of The Lilac’s Genotype
5 Pricing: Do Rare Colors Cost More?
6 Are There Breeders Online That Sell Lilac English Bulldogges?

The Origin Of The Breed: The History Of The English Bulldog Not many breeds like the English bulldog have such an unusual origin. This dog breed was created in the 13th century, during the reign of King John. Their purpose? To serve for a bloody sport called: bull baiting.

You’ve probably never heard of the sport this dog breed was named after. That’s because back in 1835, England banned animal blood sports. The bulldog of the early 18th century was threatened with extinction.

Bulldog admirers started the long journey of transforming a fighting dog into a loyal companion. Their physical contours were refined, and their looks more attractive. The temperament was tuned down, and the English bulldog became a sweet and kind pet.

By 1886, this dog became so popular in Great Britain and the United States that the AKC immediately recognized them as a breed.

Ever since then, especially during WW2, the bulldog was and remained one of the top choices for a pet. An English bulldog is a bulldog; an AKC recognized dog breed. No matter which color your bully is, it will always be a part of the AKC. After all, it’s been that way since the late 1800s!

However, the AKC doesn’t have color designations for every rare color. The only color listed as undesirable is solid black.

Still, you will not find the color lilac when trying to apply for AKC registration. The only acceptable choice for this color is placing the dog under “other colors.”

Quite unfair, isn’t it? No wonder there’s a whole hype these days for accepting rare colors!

Appearance: Know How To Recognize An English Bulldog The first word that comes to mind when thinking of bulldogs is MASSIVE.

They are of medium size, but they have a heavy, thick-set, low-slung body. The head is also massive, short-faced, with wide shoulders and sturdy limbs covered in a smooth coat.

Thanks to their large and wide nose, and short muzzle with round cheeks, you can always tell which is an English bulldog when compared to a French bulldog or an American one.

However, there are many color variations of a standard bulldog, including: 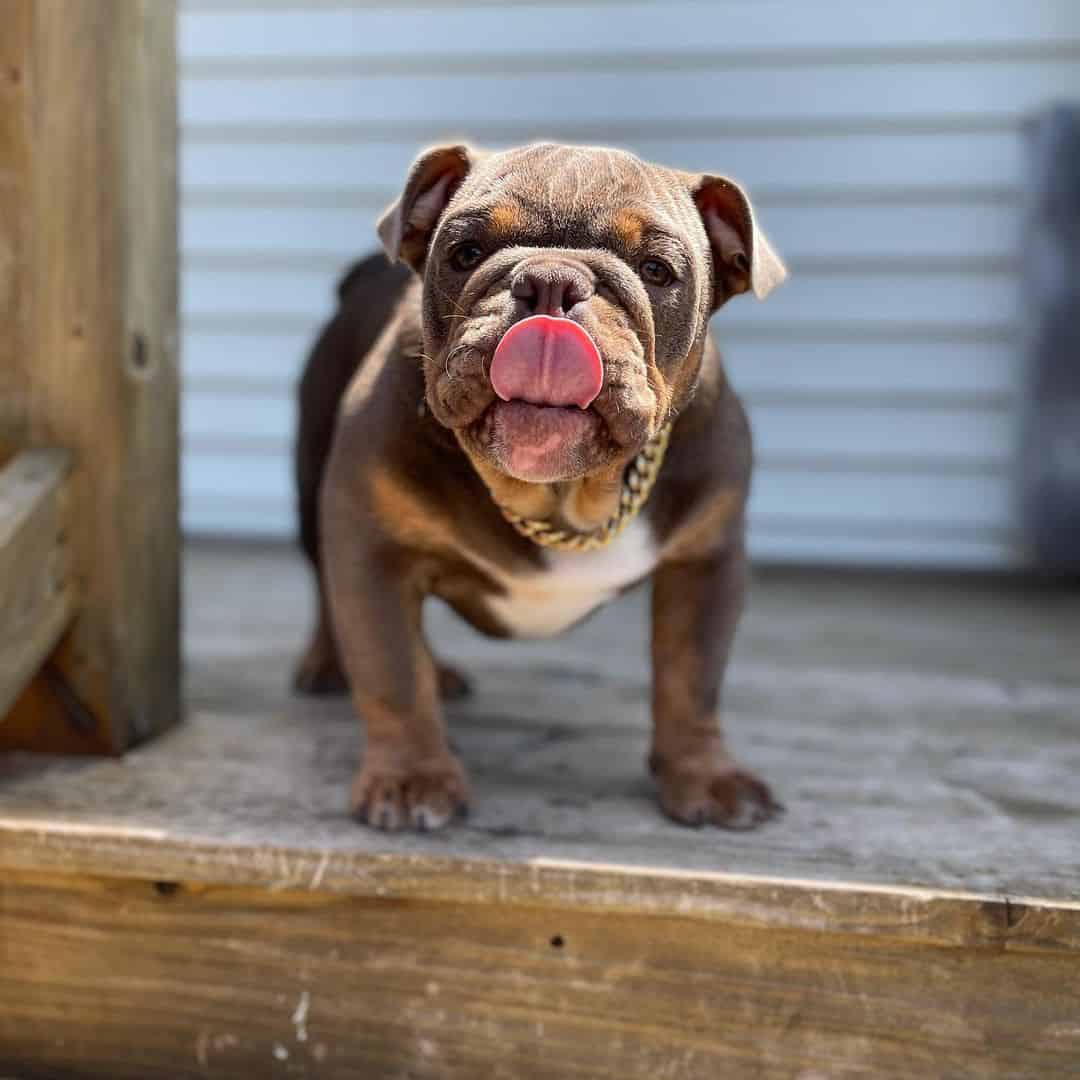 Brindle is a traditional bully pattern. You’ll probably imagine this color anytime someone mentions a bulldog. These dogs have a striped pattern in conjunction with a different colored base.

Fawn dates back to 1789 when the first fawn bully was recorded in England! This coat shade ranges from pale tan to a deep deer red.

A white or platinum bulldog is completely white, from head to toe. However, freckles of different colors are still possible.

Lilac is a rare color variety. The lilac English bulldog has had his color diluted twice: from black to brown and from black to blue. The result of this dilution is a wonderful shade of purple-lilac.

Some lilacs could have a brown undercoat or frosty blue eyes. But, almost as a rule, their nose, eyeliner, and pads are purple.

Black is another rare coat variety. These bullies have a brown undercoat, while the topcoat is shiny black. The pads, nose, and eyeliner are also deep black. Another black bully variation is black tri (a black and white coat with tan-colored points).

A blue bulldog is simply a black one that’s been diluted in color by the dd genotype. The pads, nose, and eyeliner are slate grey, while the coat shines grey under the sunlight.

A chocolate bulldog is another rare example. They got this color because of the bb genotype. Their coats have the most beautiful deep chocolate-brown color, while the pads, nose, and eyeliner could be a chocolate or liver hue.

Seal colored bulldogs are probably the rarest of them all. The coat is red or brown cast, with light-colored eyes and a dark stripe down their backs. The legs and tail are usually darker than the rest of the body.

The tri-colored bulldogs have three colors in a specific pattern. The points of a third color are usually displayed in a shade of fawn or golden brown, above their eyes, on the cheeks, chest, and inner front legs.

These spots might be familiar under the name tan points.

The General Overview Of The Lilac’s Genotype The true color of lilac bulldogs is actually black but diluted twice. This only means they’re twice as adorable! Lilac is the combo gene – full blue and full chocolate combined.

The first dilution is by the chocolate gene and the second one by the blue gene. The bb dilutes black to brown, and then the dd dilutes black to blue. When you mix the brown and blue, you will get the specific lilac shade.

The lilac coat resembles much the one a grey Weimerainer carries. It should be shiny with as many dark and light shades as possible. Under the sun, it’s a seal color.

Some might even have an undercoat that shines pink or green, depending on the light. It’s unlikely you’ll find a rare-colored bulldog in a shelter. If you do, then fortune has smiled upon you.

The more likely scenario is that you’ll have to find a breeder with bulldog puppies for sale. The standard colors, like red, white, or fawn, cost around $2,500. But, the rare colors are much more pricey!

When you do find available puppies, here are the cutest miniature English bulldogs out there:

The blue sable is a red-based dog with a silver cast to its coat. Their eyes are usually green/blue or hazel. They have faint tri marking on their legs, face, and chest. The prices for this type starts at $4,500 to $5,000.

The blue tri has a silver coat with tan points on the legs, eyes, and chest. Their eyes are usually blue/green. To get this Bulldogge, you’re going to have to pay somewhere from $5,500 to $6,500!

Our favorite, the lilac tri, is the hardest color to get, and therefore very pricey. They have a chocolate base coat with the blue gene that turns the color into a champagne shade.

The eye color is the brightest one among all rare types, varying from aqua blue to green or ice blue.

The lilac sable is somewhat cheaper than the lilac tri, costing only $5,000 to $6,000. Some sables are darker than others, but their eye color is quite light and glowing. Usually, this dog comes in a champagne color.

The chocolate tri is also in high demand. Their nose is brown, and the coat dark-brown with tan points on the legs, face, and eyes.

The red sable bulldog is considered to be a standard breed. Their tri markings are faint, and they usually cost $2,800 to $3,500.

Merle is the newest color addition. They come in chocolate tri, blue tri, and black tri. Their undercoat is blue, and the topcoat is darker.

The brindling on the chocolate brindle is chocolate or blue/silver. To get one of these pups, you’ll have to pay $3,500 to $4,000.

Are There Breeders Online That Sell Lilac English Bulldogges? You bet there are! Many dog breeders have found the Internet to be the perfect place to find potential buyers. That is, to have the potential buyers find them. When in search of a lilac bulldog, or any other olde English pup, have these websites as your first stop:

Any of these breeders are well-known and sell only the best offspring. You just need to pick whether you want a lilac bulldog or some other unique color!

Hardly any other dog breed can compare with the sweet, mushy face of a lilac English bulldog. These dogs might look tough, but their heart is as soft as a chew toy!

Purple might not be your favorite color, but one look at this pooch will change your mind for good!

Read Next: Male Vs. Female English Bulldog: What Are The Differences? 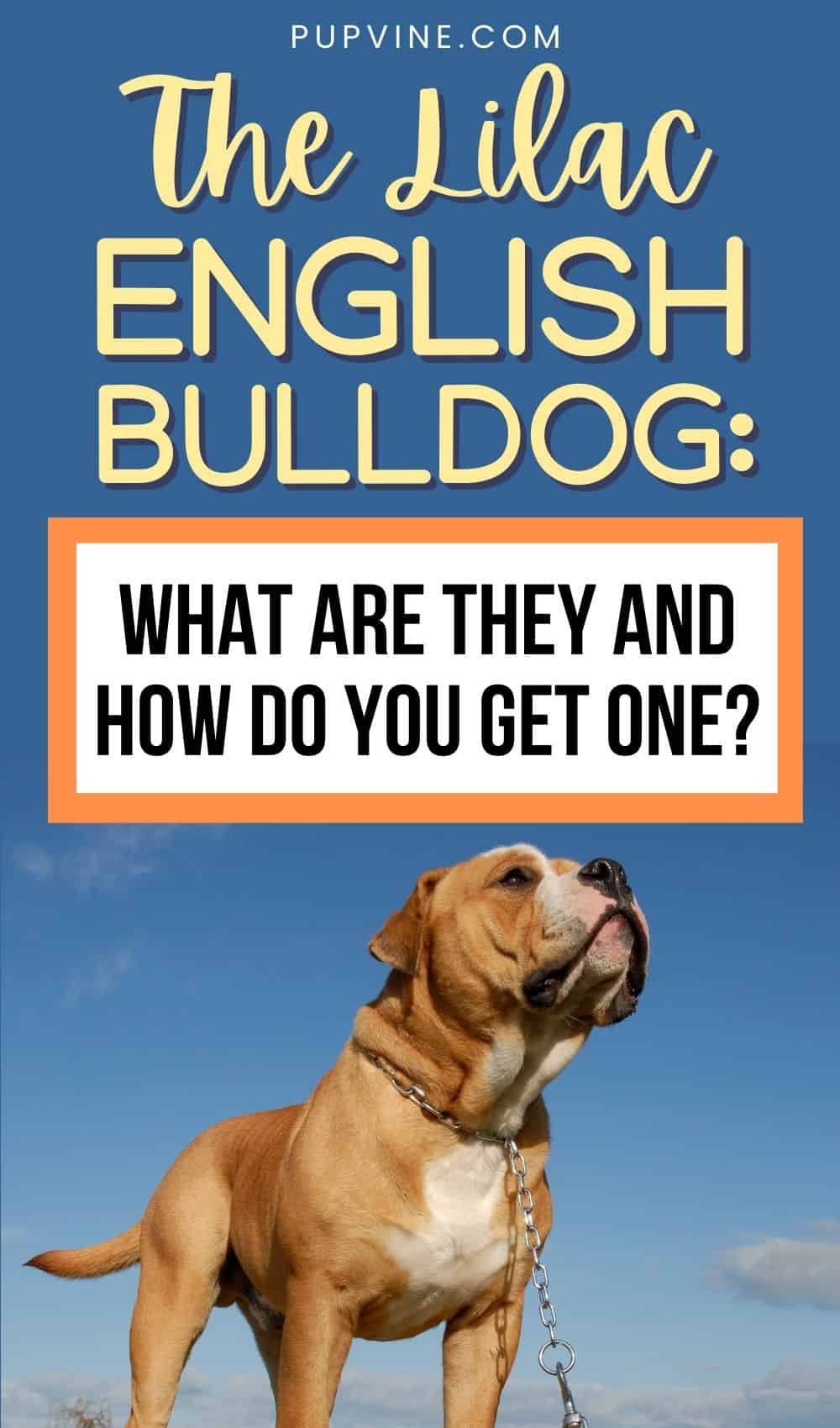 English Bulldog Feeding Chart: How Much Food Is Enough?

[…] Bulldogs come in a variety of colors, including white, chocolate, bi-color, tri-color, lilac, blue, merle, and other shades and […]

[…] resolute, with the Bulldog Club of America, to remove the non-purebred colors in Bulldogs, such as lilac, merle, blue, […]

[…] The English Bulldog – Also called the British Bulldog or just Bulldog, these are similar to their […]

[…] it is called lilac, this is another example of the exaggerations used in dog coat […]