Well hello there! Let me introduce you to a very sophisticated pup, also known as the American Gentleman. Can you guess who it is? It‘s the Boston terrier, of course!

The Boston Terrier is a small purebred pooch, it has a smooth coat, outgoing personality, and a smart little head. It inherits a short, but very shiny, coat with patterns that make it look like a tuxedo.

Let’s begin, shall we?

The development of kennel clubs, particularly the American Kennel Club has led to the formation of breed standards for all purebred dogs.

That being said, Boston Terriers come in the following three colors:

However, these are not solid colors, as there are signature white markings that are spread across specific areas of the Boston Terrier’s body.
When it comes to the Boston Terrier’s eye color, the AKC breed standards are very picky about it, Boston Terriers should only inherit dark brown eyes. Although a Boston Terrier with blue eyes looks adorable, this is considered a flaw and such pups can’t participate in dog shows.

Now that we have made that clear, let’s jump right into the world of Boston Terrier colors. 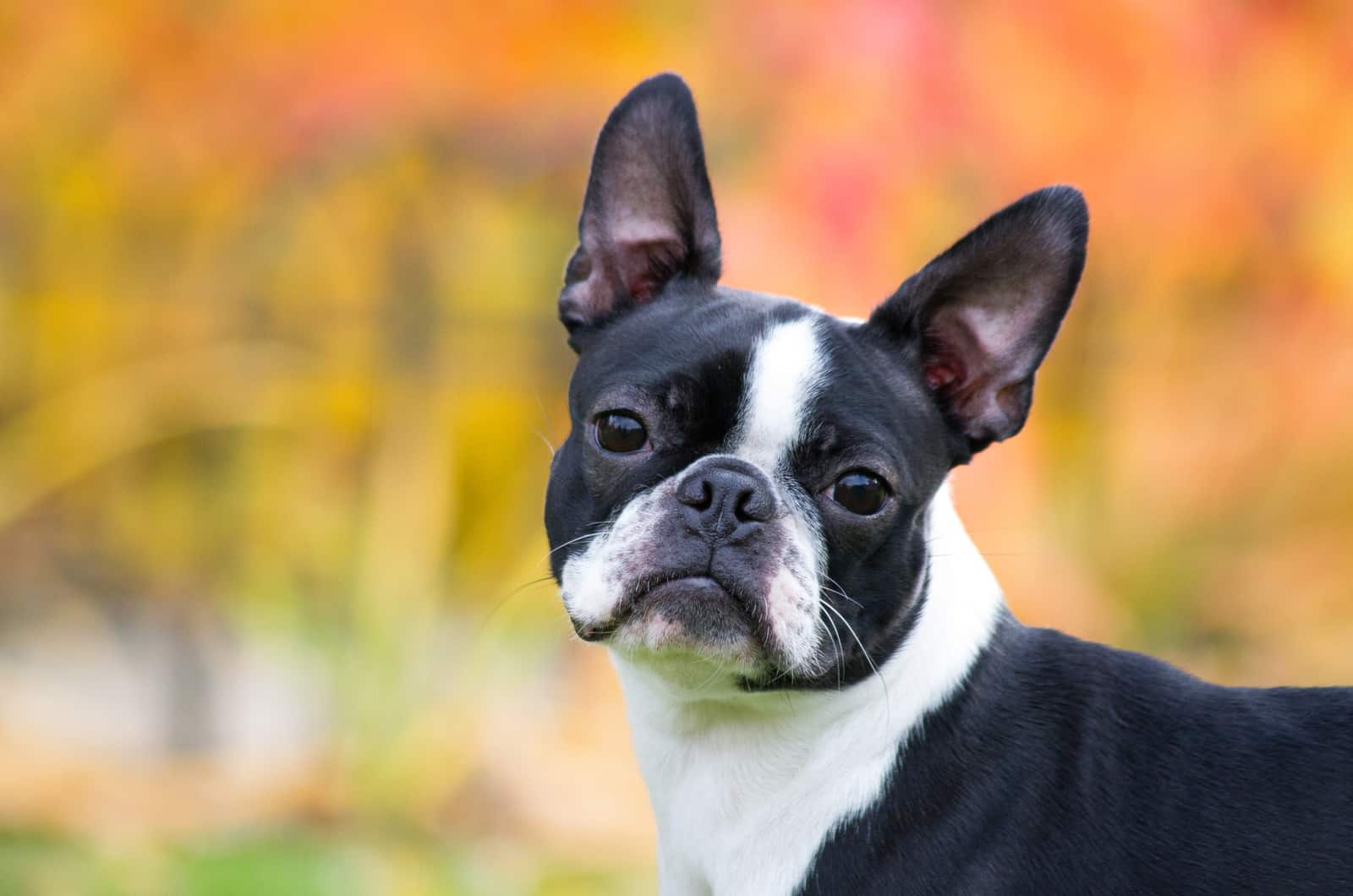 First and foremost, we have a very common Boston Terrier color – the famous black and white. The American Gentleman that we all know and love, rocks his stylish tuxedo coat.

The black and white Boston Terrier always looks so cool and it is without fail always ready for a special event. This only means that you, as a proud Boston Terrier owner, should also follow its stylish appearance!

I must note that white markings are solid. This means that there should not be any dots or spots on them.

The reason why I’m stating this is because a solid black coat color in Boston Terriers is a big no-no. Well, at least in the AKC’s book. The solid black Boston Terrier does exist, but it is not show dog material.

The black and white Boston terrier is more than just its stately appearance – owners describe their beloved Boston Terrier puppies as energetic, friendly, and fun-loving. 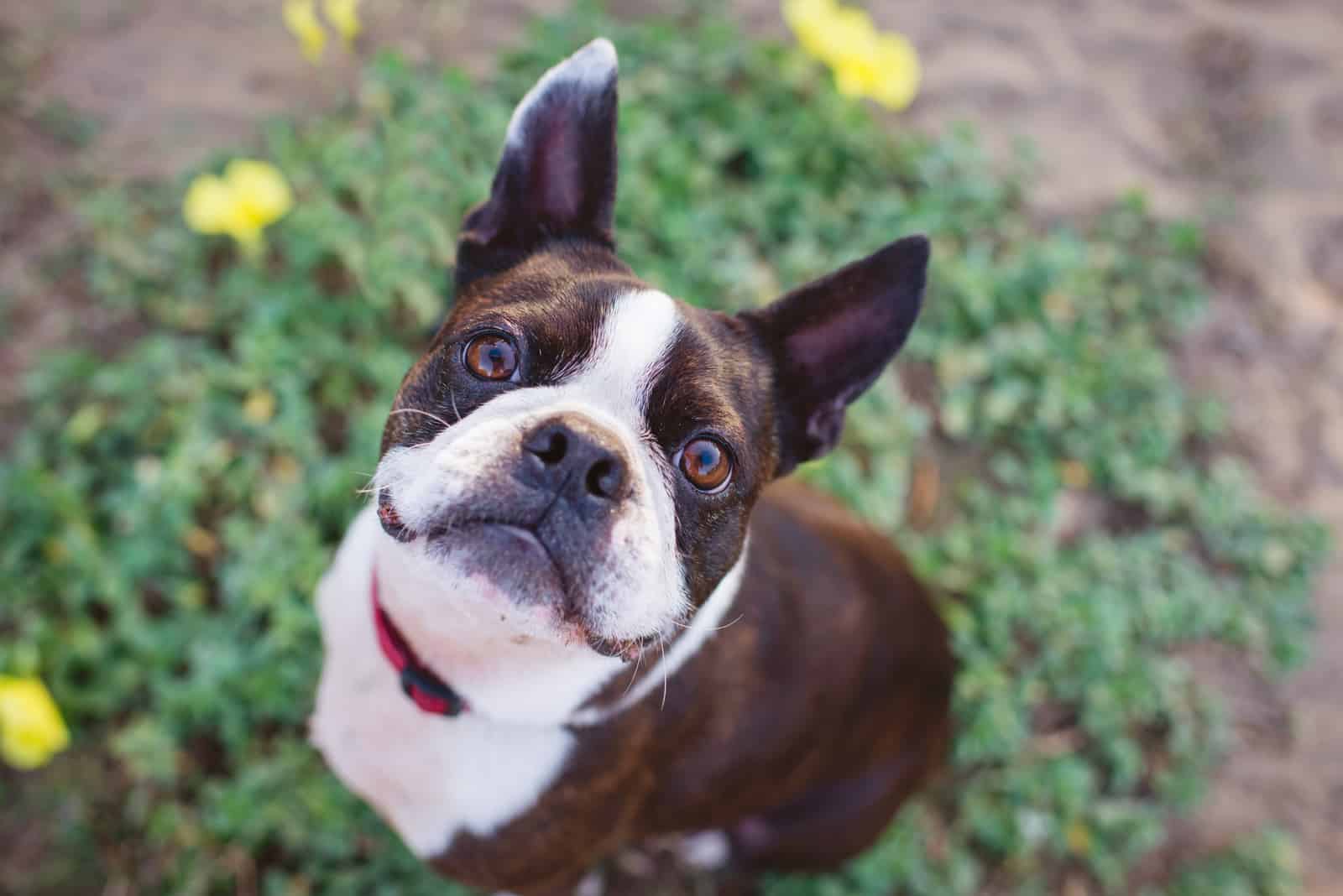 Although not as famous as their seal and black/white colored brothers and sisters, Brindle colored Boston Terrier puppies are as equally cute and cuddly! Besides that, the brindle and white is an elegant coat color variation to consider.

The base coat color of a brindle Boston terrier dog is usually streaked with tiny black hairs. So, you will often see a brindle base color rather than a solid black or a solid brown.

In the canine world, brindle coats are also known as “tiger stripes”. These stripes can be either dark or bright light. The Brindle coat color is carried by a recessive gene and the extent of the color and the actual pattern vary according to it.

There are numerous shades of brindle, ranging from dark reds and browns to pale golden tones covered in a black or seal striped pattern. The most sought-after hue when the Boston Terrier dog breed first began to take off, was the dark reddish brindle, sometimes known as “Mahogany Brindle”.

More often than not, brindle coats are inherited by famous purebred dogs, such as French Bulldogs, Great Danes, and Boxers.

But, there’s this one dog that reminds me the most of the brindle and white Boston Terrier and it’s none other than the brindle Corgi. Of course, these two don’t look alike, but their white markings are similarly distributed across their muzzle and forechest. 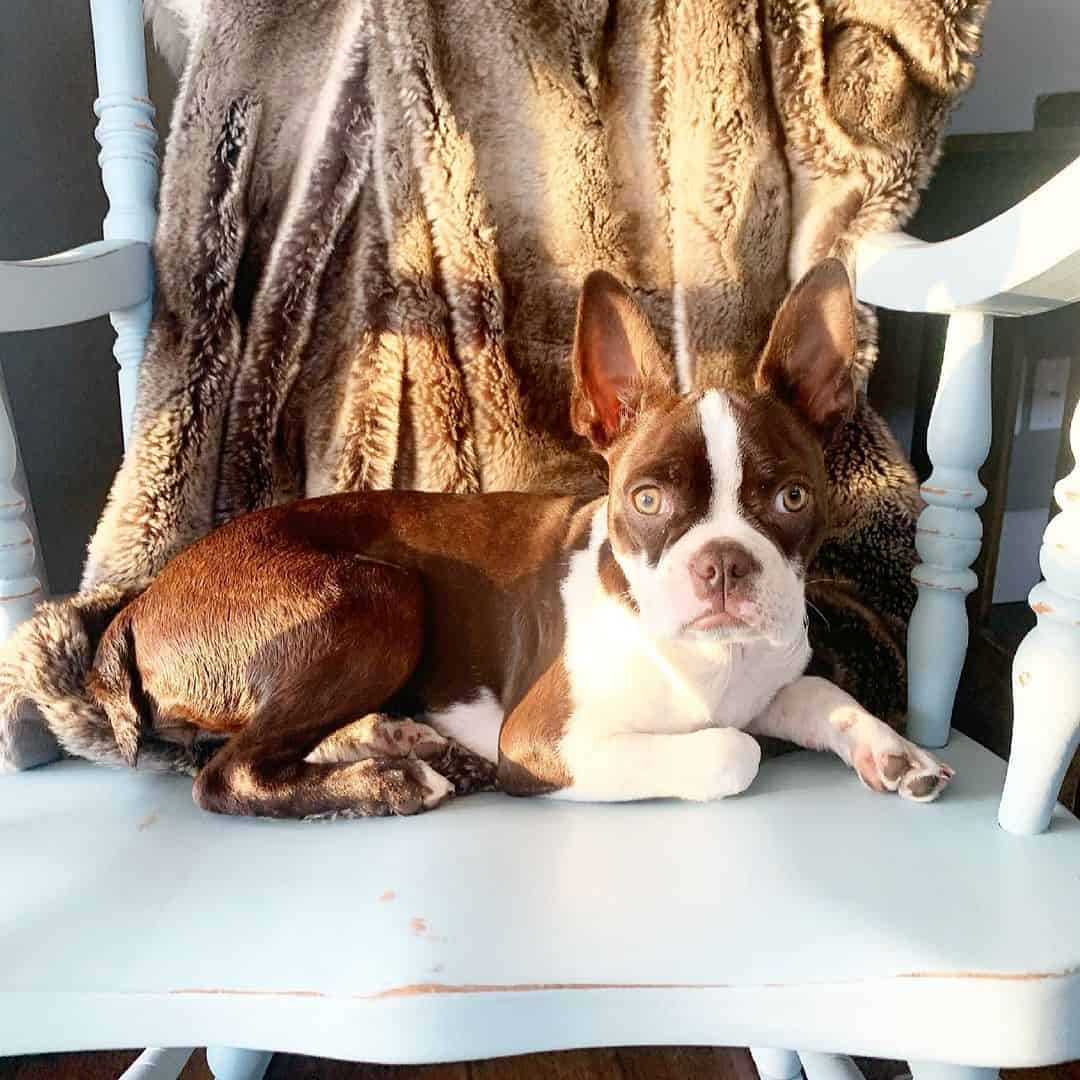 The seal color is best described as a black color variation (although it leans more toward brown hues). When exposed to the sunlight, a seal colored coat reflects brown to reddish color tones.

But, why is it called seal then? Well, because of these reddish undertones that peek through when the sunlight hits the coat, the appearance of a seal Boston Terrier puppy resembles a wet seal!

So, the simplest way to determine whether a Boston Terrier is a seal and white pup is to compare it to a wet seal!

These white markings are located on specific areas of the seal Boston Terrier’s coat – the same areas that are solid white in the black and brindle Boston Terriers. We’re talking about white muzzle bands, forelimbs, hocks, and paws.

So, don’t worry, because the white tuxedo is still there!

Despite being a recessive color gene, the seal color is often passed on to liters of Boston Terrier mixes. Isn’t that pawesome?

Neither the American Kennel Club nor the Boston Terrier Club of America are able to register any of the colors that we are going to mention. Boston Terriers that are born with any other coat color than the ones described by the breed standards can be eligible for pedigree papers, but they cannot participate in dog shows.

In reality, the Boston Terrier’s original breed standard stated that all coat colors were allowed. However, since then, the physical model of an “ideal” Boston has been improved upon. This limited the desirable colors and patterns.

The majority of breeders have purposefully stopped producing litters of red, merle, lilac, and blue Boston Terrier puppies in response to these decisions. 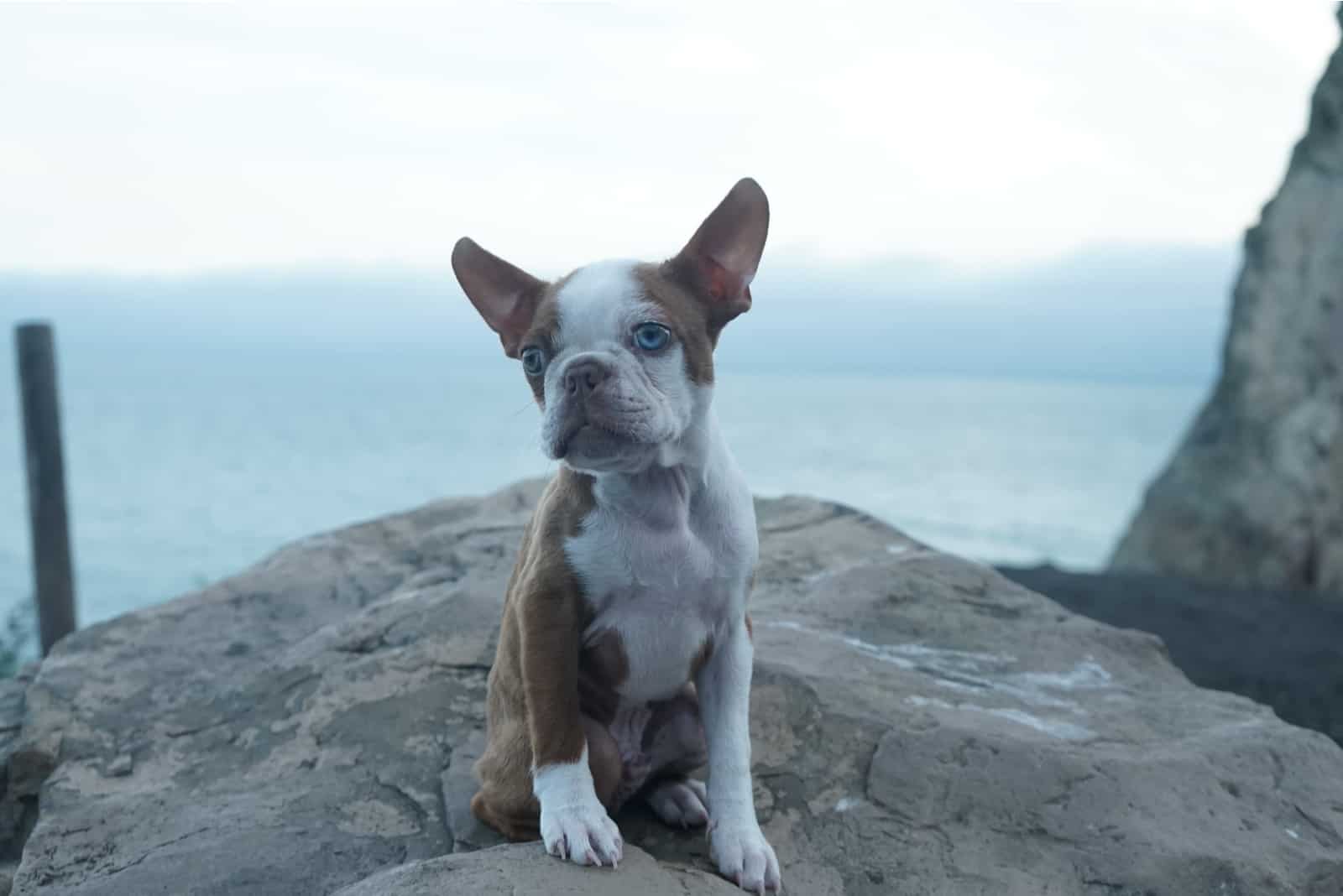 Its red coat has more of a liver-toned hue to it. Red Boston Terriers inherit the cutest reddish to brown noses. And what makes them even cuter, is that their brown colored noses match their paws. Moreover, the red color can appear as a dilute shade of brown.

When I first saw a red Boston Terrier, I realized that its red coat has many different shades and hues to it. It ranges from deep red, copper red, light red, to vivid red. That being said, there shouldn‘t be any dark pigmentation on a pure red Boston Terrier‘s coat. Of course, the standard white tuxedo is included!

White markings are present on the red Boston Terrier’s chest, white blaze between the brown eyes, and the typical white muzzle band. 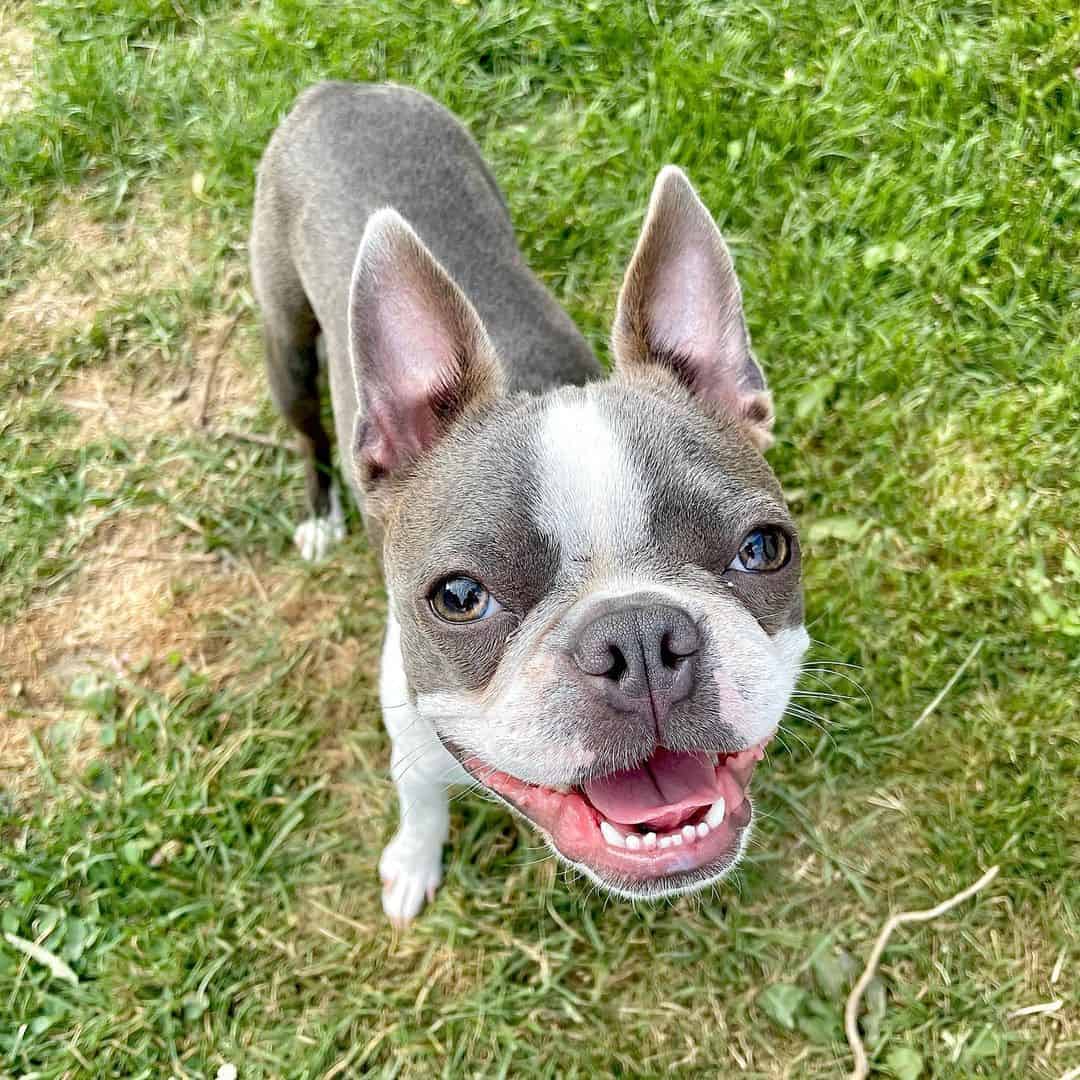 Despite what its name says, the Blue Boston Terrier’s coat is frequently described as gray.

Besides that, their beautiful blue eyes are windows to the soul of a blue Boston Terrier. They will certainly leave you in awe!

But, guess what? This combination is usually linked to deafness. However, this is thought to be more of a myth than a fact.

The Blue Boston Terrier’s color refers to a cool gray shade that is created by the dilution of the black color.

Even though blue Boston Terriers don’t fit within the AKC standards, they can still be eligible for pedigree papers.

It is generally acknowledged that the blue Boston Terrier dog may produce puppies with blue coats, despite the fact that the blue color gene is recessive.

The Blue Boston Terrier’s history dates back to the 1870s. This was when a breeder crossed a dark brindle coated dog, named Hooper’s Judge, with a white bulldog-type female dog, named Burnett’s Gyp.

Most canine specialists and breeders have evidence that the blue Boston Terrier is a cross between an English Bulldog and an English Terrier. This is referred to as a bull terrier mix and is related to the well-known French Bulldog. Which is quite understandable, especially when we take into consideration how many French Bulldog colors there are that are similar to the Boston Terrier colors.

One thing’s for sure, the blue Boston Terrier is visually appealing. They make the cutest puppies because of their black nose and blue eyes.

The physical features that enhance the blue Boston Terrier’s gorgeous appearance are its short, white muzzle band and the signature white blaze between their eyes. 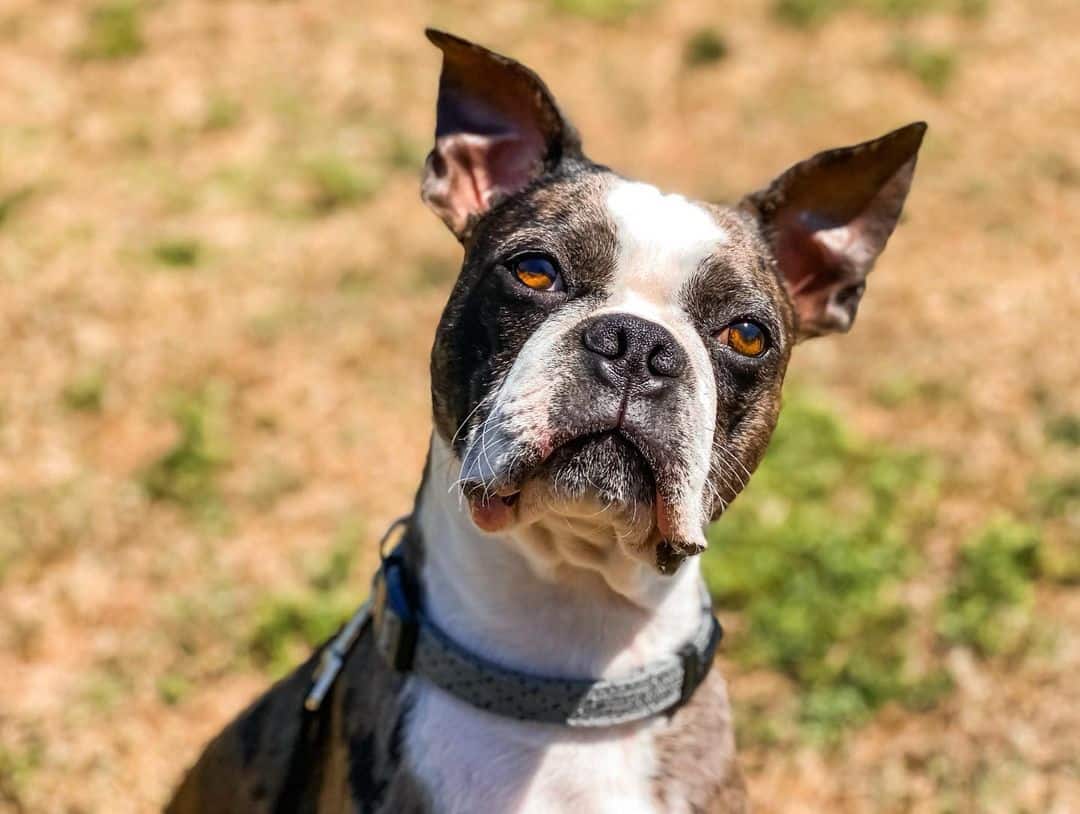 You must be really lucky if you’ve seen a merle Boston Terrier in real life!

We know nothing about the merle Boston’s past. However, according to current breeding practices, a merle dog from another dog breed must have been bred with a Boston to produce a merle Boston terrier.

Dogs advertised as Merle Boston Terriers must have recent ancestry from another dog breed (such as a merle Chihuahua) because the merle gene does not exist in the Boston Terrier.

Because of its faded color, Merle speckles on the Boston Terrier’s coat can be an eye-catching aesthetic.

However, there’s a downside to the merle gene. Research shows that the merle genes in Boston Terriers can cause visual impairment and, as a result, cause cataracts. 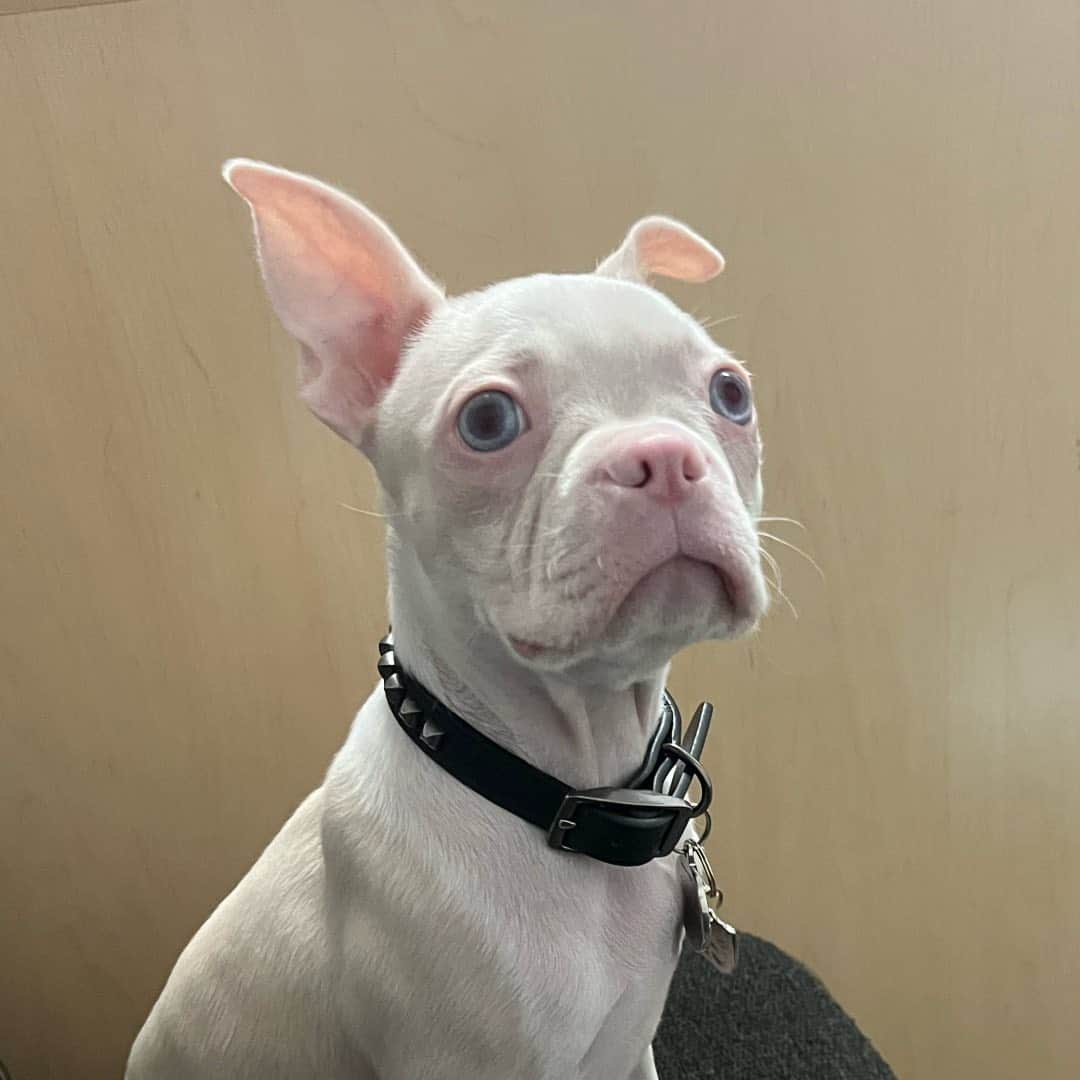 At first glance, albino, or as some call them, white Boston Terriers, seem very impressive. While some people enjoy their color and pigment (or lack thereof), others aren’t too fond of their appearance.

While their eye color is bluish/greenish, their snout, eye rims, and paw pads are all completely devoid of pigment.

Another name for White Boston Terriers is Cornaz Albinos because they lack color as a result of double dilution. The Boston Terrier breed is thought to contain two different forms of albinos: Cornaz and Leucism.

Genetic information about albinos is still so vaguely understood. Nothing is truly known about albino Boston Terriers scientifically. 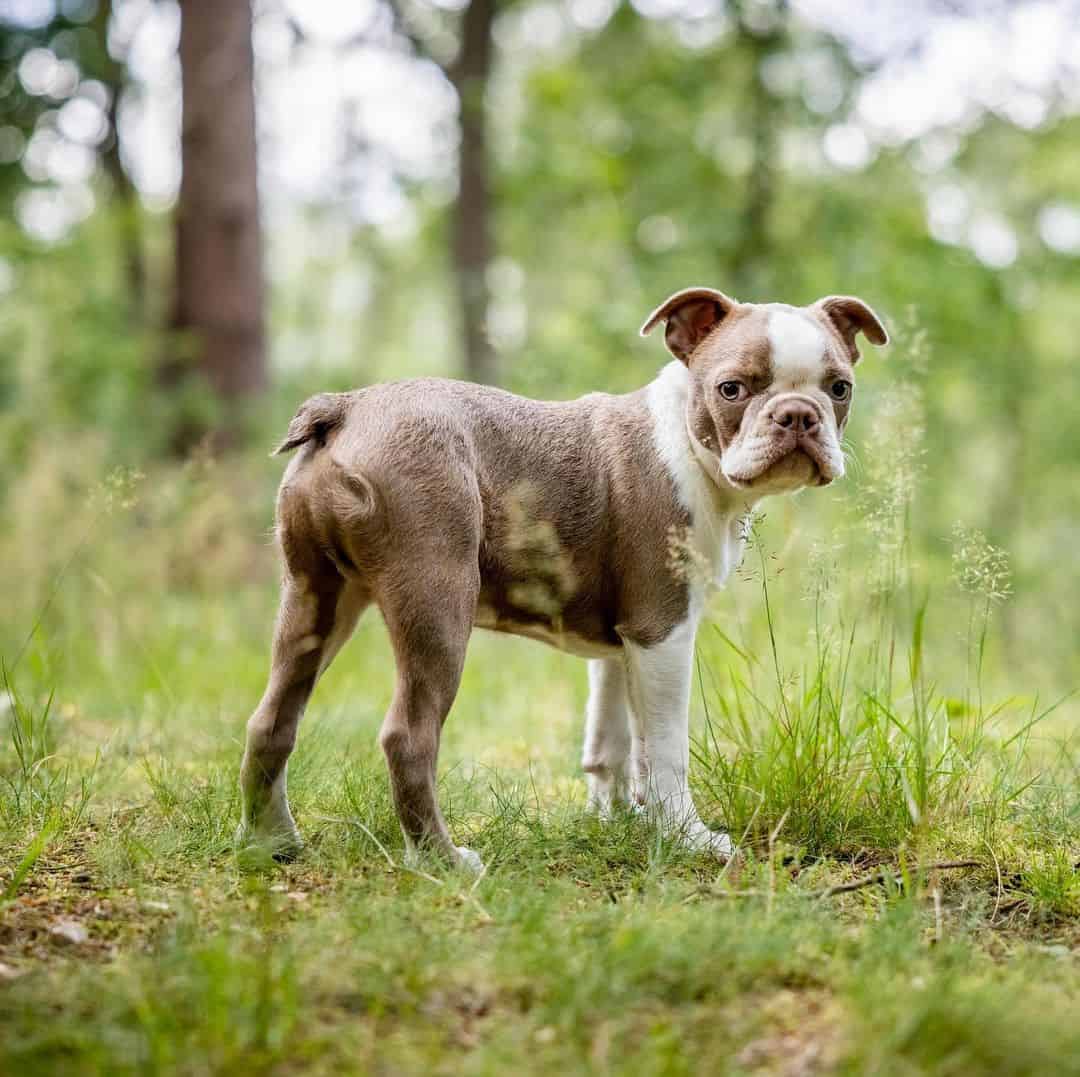 But, it’s not only the brown color that contributes to the development of lilac coat colors. Red/brown and white Boston Terrier’s diluted color genes create lilac Boston Terriers.

The lilac coat should not have any brown or black hairs on it.

Lilac can only be created by combining brown and black diluted Boston Terriers. This means that both Boston Terrier parents must have these coat characteristics. 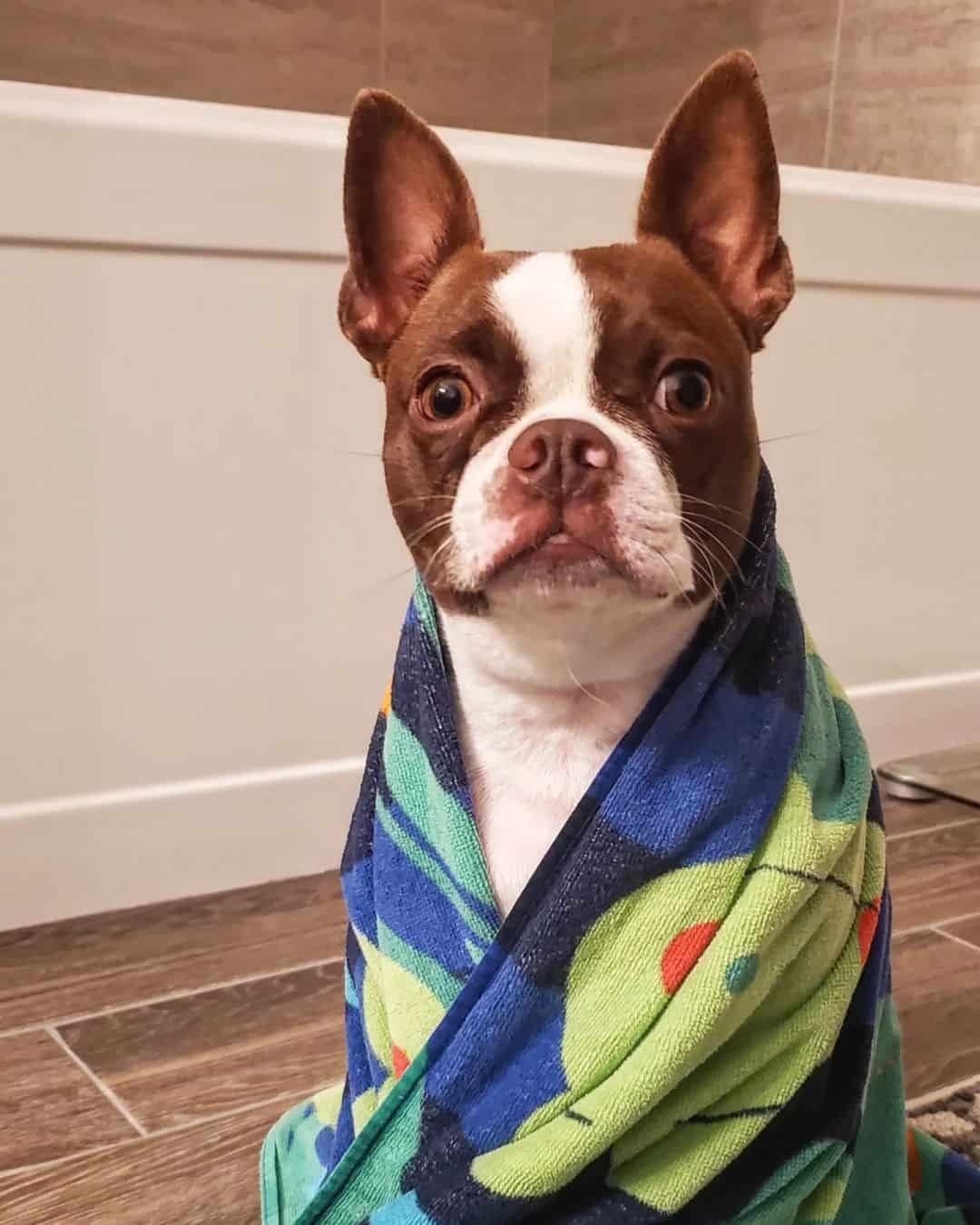 Although chocolate Boston Terriers often inherit a dark brown color shade, there are other variations of their brown colored coats.

These liver or brown/chocolate hues can be very attractive, but no significant breed registry really accepts them. So no, chocolate Boston Terriers can’t participate in dog shows, but they can receive their pedigrees.

Do Boston Terriers come in anything but black and white? Well hopefully, this article has answered this very common question.

The fabulous American Gentleman inherits a short tail and a smooth coat that is easy to maintain. Besides its wonderful colors, the Boston Terrier will make an amazing, energy-packed companion that is sure to brighten each day!

Furthermore, the Boston Terrier growth chart describes this pooch as a small dog that can easily fit anywhere, including on the bed or couch.

That being said, it is a perfect choice for first-time dog owners (as long as you can deal with the health problems caused by their unnaturally short face).

The Ultimate 2022 Guide To All The Lovely Shiba Inu Colors