Maybe the Cavalier King Charles Spaniel colors are the reason why this dog had special treatment from the beginning. This dog is the descendant of the Toy Spaniel… a breed popular from the renaissance time.

Some legends say that King Charles II loved them so much that he issued a special decree by which he allowed this breed to enter freely, even to the Parliament.

This rumor has never been confirmed, but it says a lot about the status of this breed in English courts.

However, we can not deny this dog being so sweet and endearing. Fluffy hair, big, loving eyes – it is cuteness overload. And, if I may add, not only that, but these dogs have looks. They have it all. They are perfect companion dogs if you like long walks, for example. They are good in a home environment, which makes them perfect family dogs, and if you like cuddling, he will easily take his lap dog role.

We have just learned a lot about this cutie pie, but let’s get to know him even better.

There are four standard and a few more substandard colors of the Cavalier King Charles Spaniel. Standard colors are Black and Tan, Ruby, Blenheim, and Tricolor.

Substandard colors can not compete in conformation dog shows. This means that they are perceived as a fault in evaluation.

Standard or substandard, we find Cavalier King Charles Spaniels beautiful and adorable no matter the color. 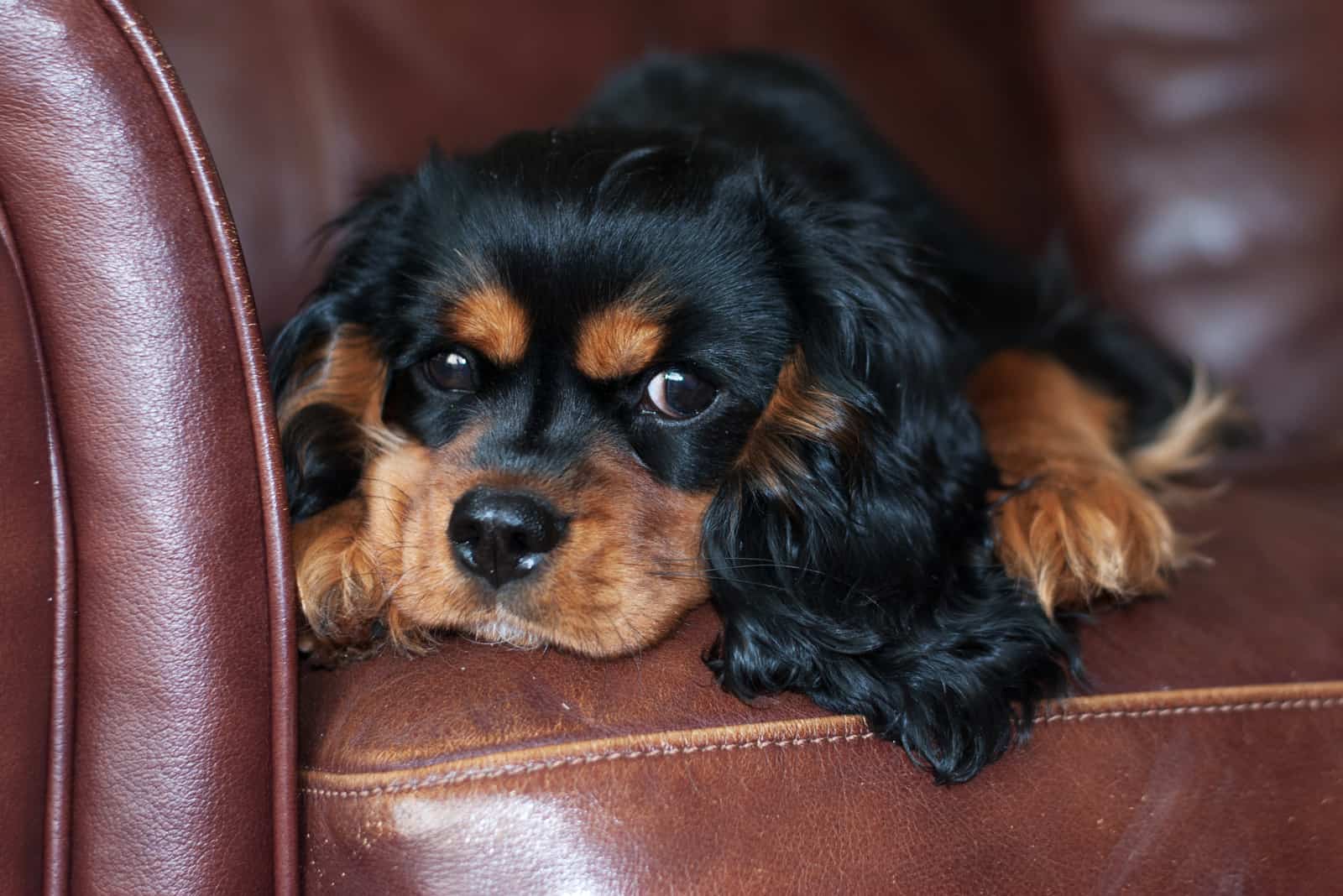 First on our list are black and tan Cavaliers.

Due to a genetic background that is very compound, black and tan Cocker Spaniels are perhaps the most infrequent kind of the King Charles Spaniel.

You will recognize this dog as having black-colored body hair, with tan highlights. These tan markings highlight areas under the nails, cheeks, and eyebrows, while occasionally, those markings can also appear inside the ears and legs.

If black and tan Cavaliers have white markings on them, it is considered as a beloved breed standard in dog shows. 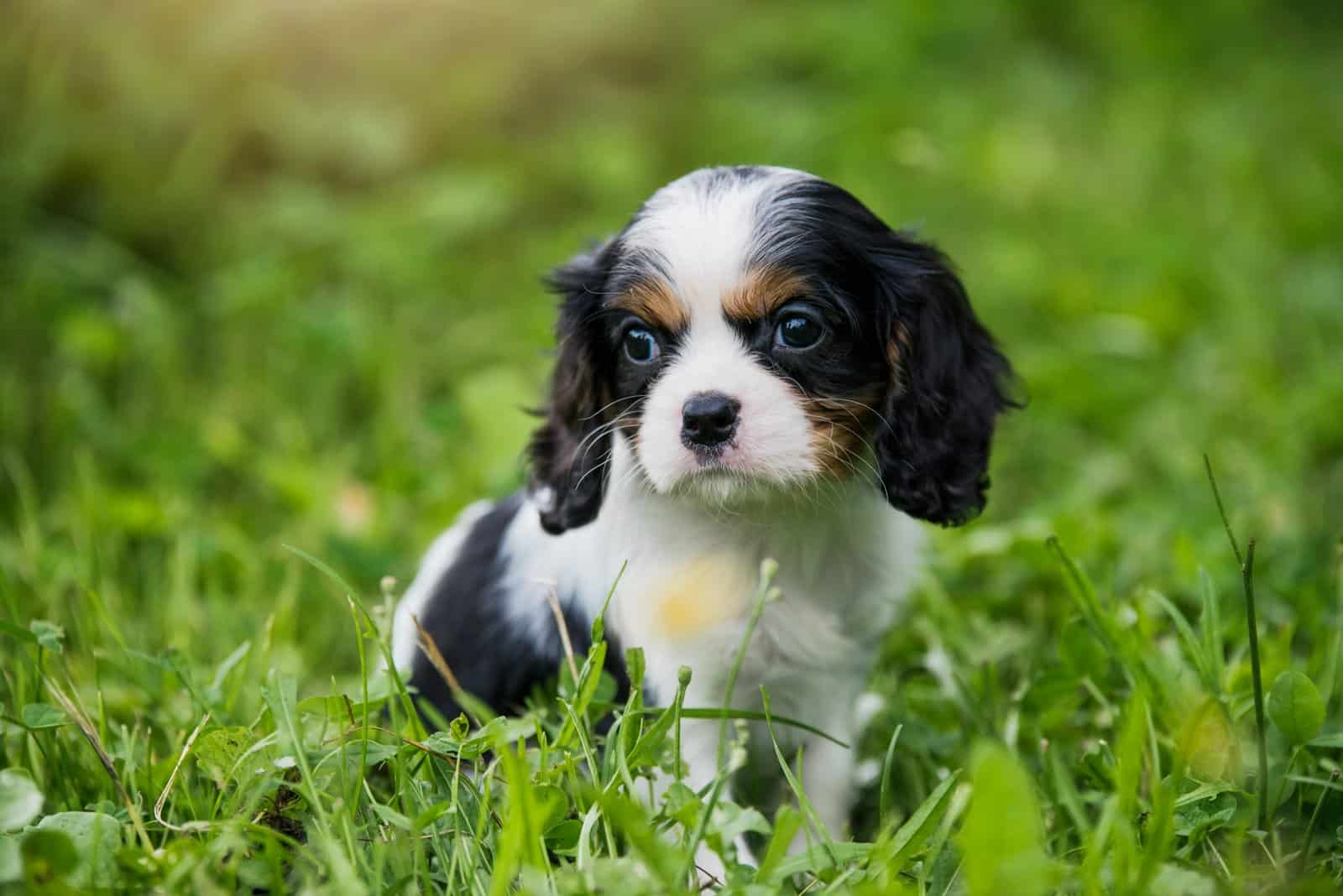 Black and white-colored Cocker Spaniels are very rare to see. This means a black body with white markings on the chest, face, and feet. 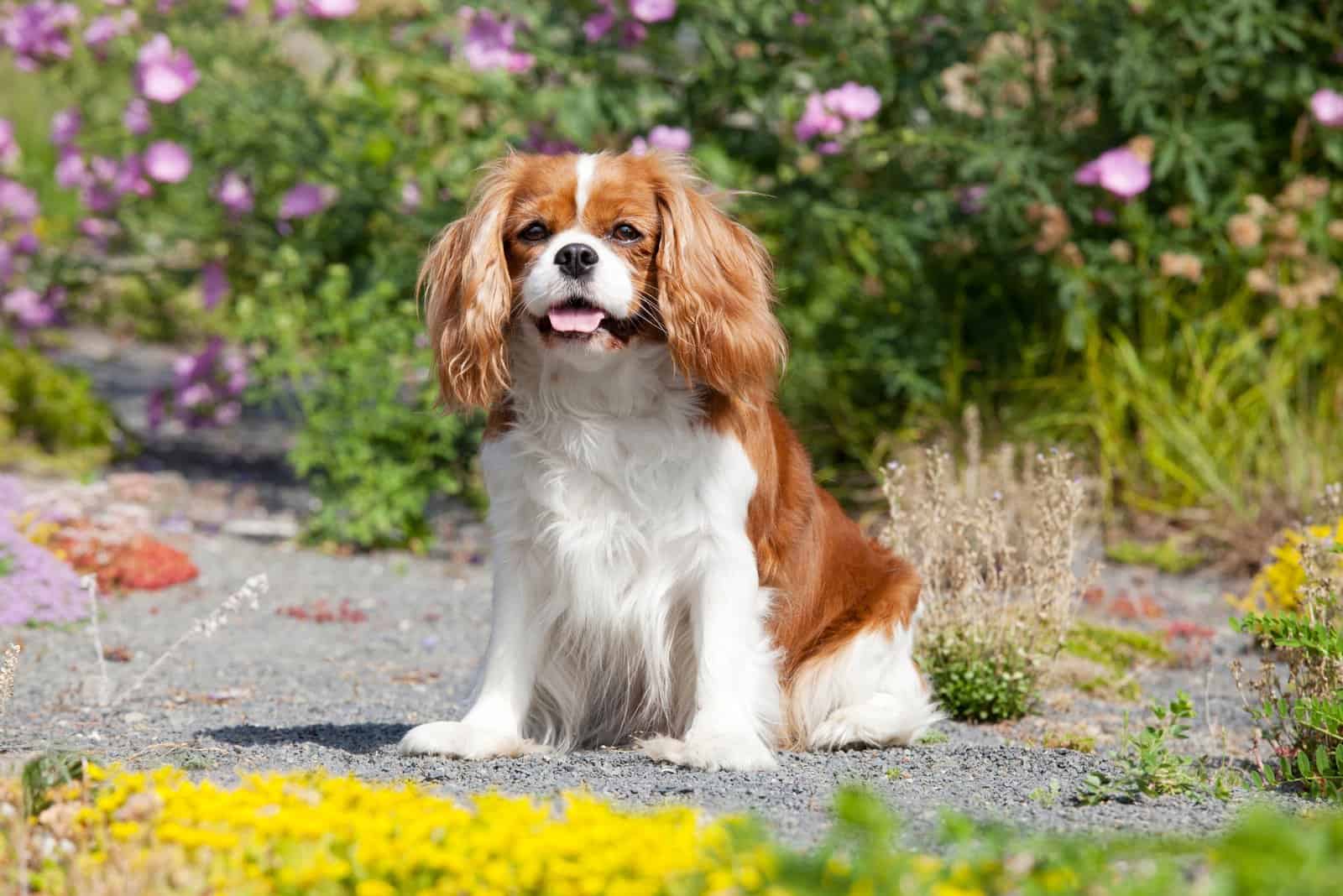 Blenheim is the most frequent of the Cavalier King Charles Spaniel colors. It was named after a Blenheim palace where they were raised by the Duke of Marlborough in the 18th century.

This variation is recognizable for its white background, colored with chestnut markings, which are deployed around the eyes, on the ears, and all over the body.

A mug is white, and it goes up in the form of a white blaze on the forehead. Sometimes, there is a ruby- or chestnut-colored spot in the middle of the forehead, which is called a “Blenheim kiss” or a “Blenheim spot”.

Storytellers say that this marking arose while the Duke of Marlborough, John Churchill, went to the Battle of Blenheim. His beloved wife was worried about his safety. While expecting her husband’s return, she found consolation in this popular breed, which her husband was so fond of.

The story tells us that she pressed her thumb against the forehead of her dog, which was expecting new puppies. The battle was won, and the Duke of Marlborough was greeted with five new puppies with unique markings. Therefore, sometimes this spot on Blenheim Cavalier King Charles Spaniels is also called the “Dutchess Thumb Print“. 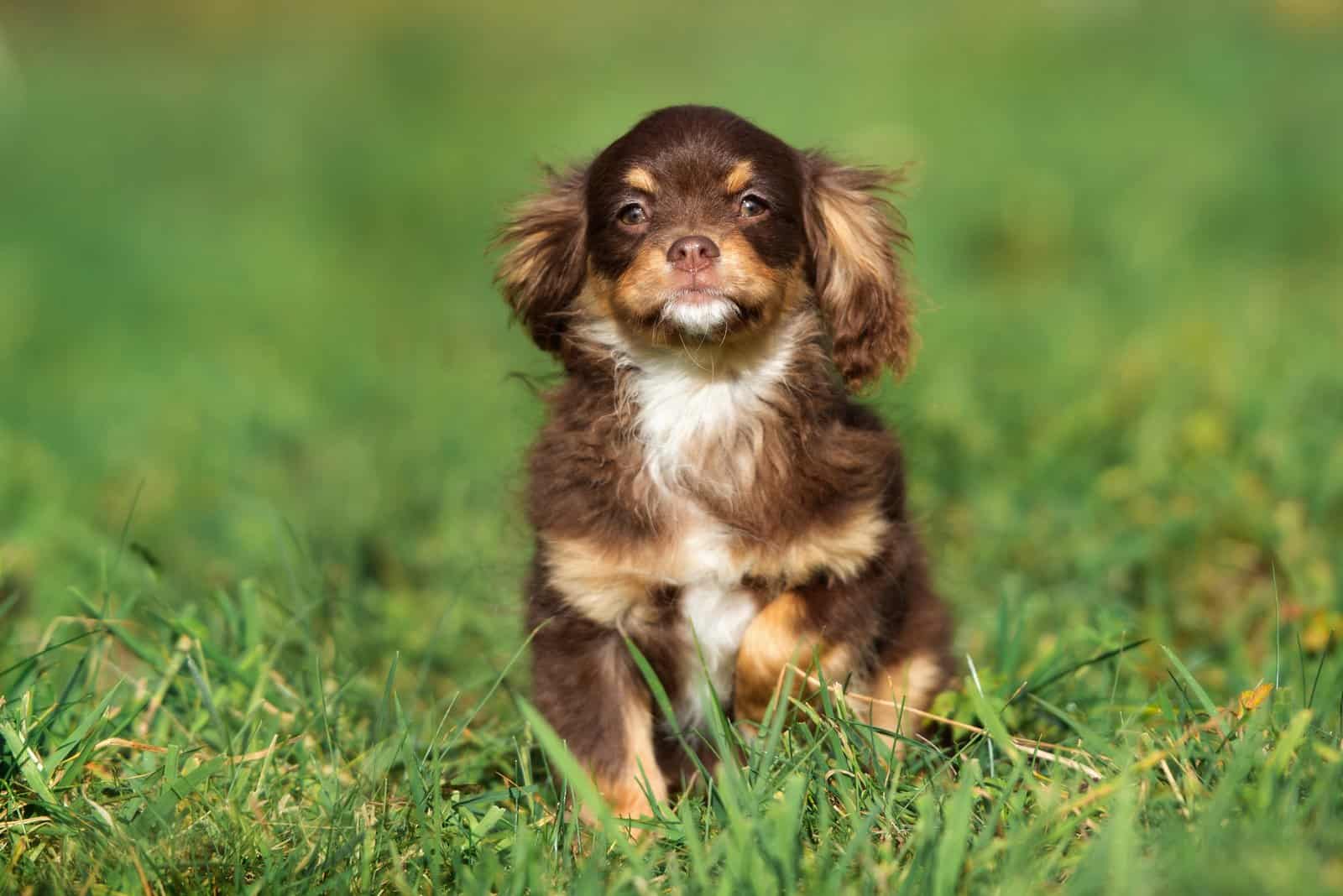 Unlike tricolor Cocker Spaniels, combinations of Cavalier King Charles Spaniel colors that we refer to as chocolate are really white, ruby, and deep black.

The American Kennel Club mentions one more variation of chocolate color in this dog breed, and that is chocolate and white. 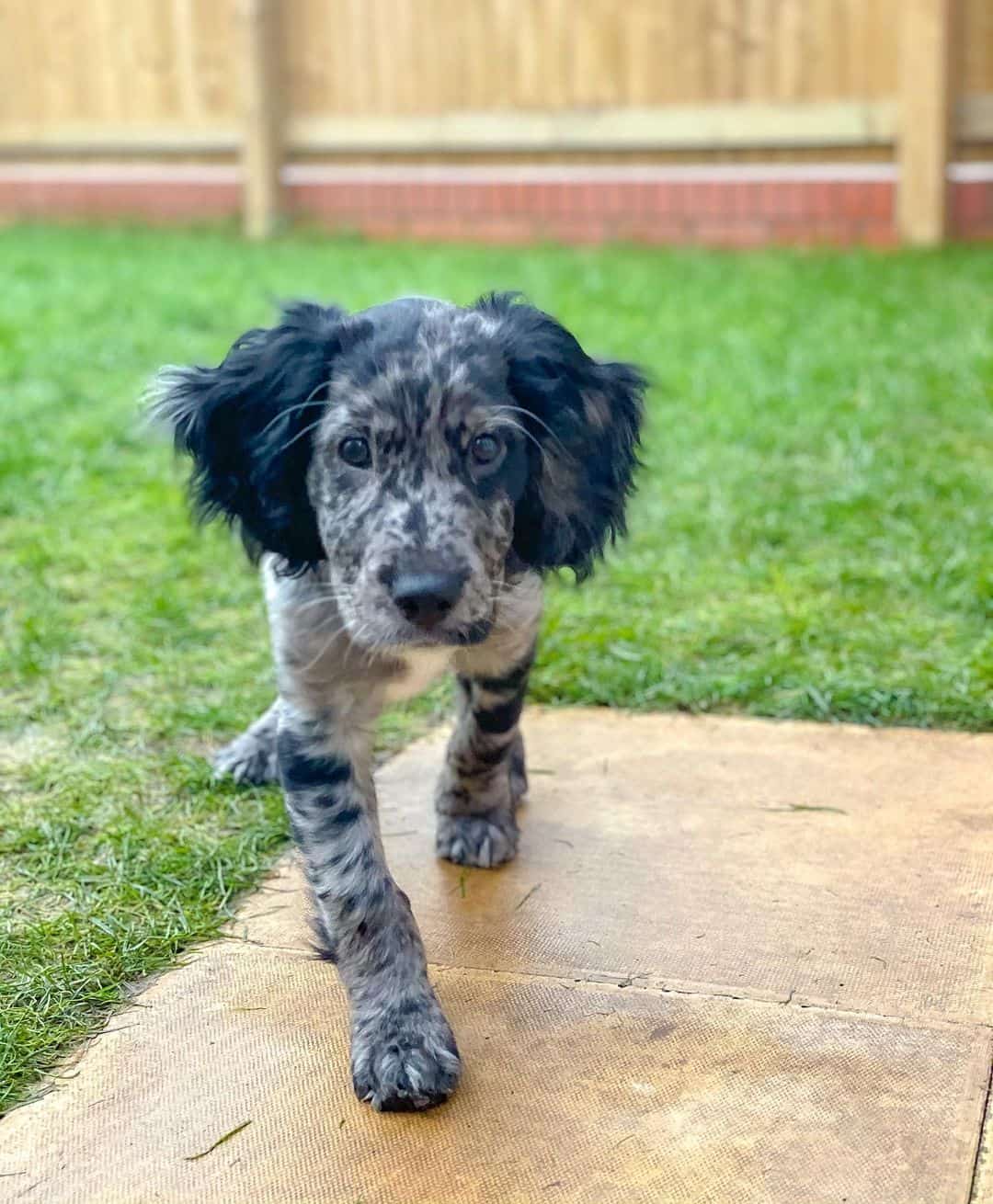 The merle color appears in Cavalier King Charles Spaniels that are not purebred because CKCS do not carry this gene. The M-locus dominant gene causes this variation. It also causes blue eyes and other uncommon colors.

Merle spots on these dogs are not duly distributed, and they do not have a pattern. They can be found in whole-color and parti-color variations.

Ruby Cavalier King Charles Spaniels are one of two whole colors that these small dogs appear in. This color is the more frequent of the two. Ruby refers to a chestnut hair tone in these little dogs, and it is perhaps the rarest shade found in this breed.

Many Ruby Cocker Spaniels have white markings on their chest area. That makes them adorable, but this trait is not preferable for competitors in dog shows. The AKC (or American Kennel Club) conformation views markings on ruby Cavalier King Charles Spaniels as a fault.

Regarding their genetic background, when combining different-colored CKCS, you can get a few color variations. Whole, ruby-colored Cavalier King Charles Spaniel puppies are a product of two ruby-colored dogs. When combined with a black and tan puppy, ruby will produce a combination of all three. If bred with blenheim, then there is a possibility of markings on the coat. 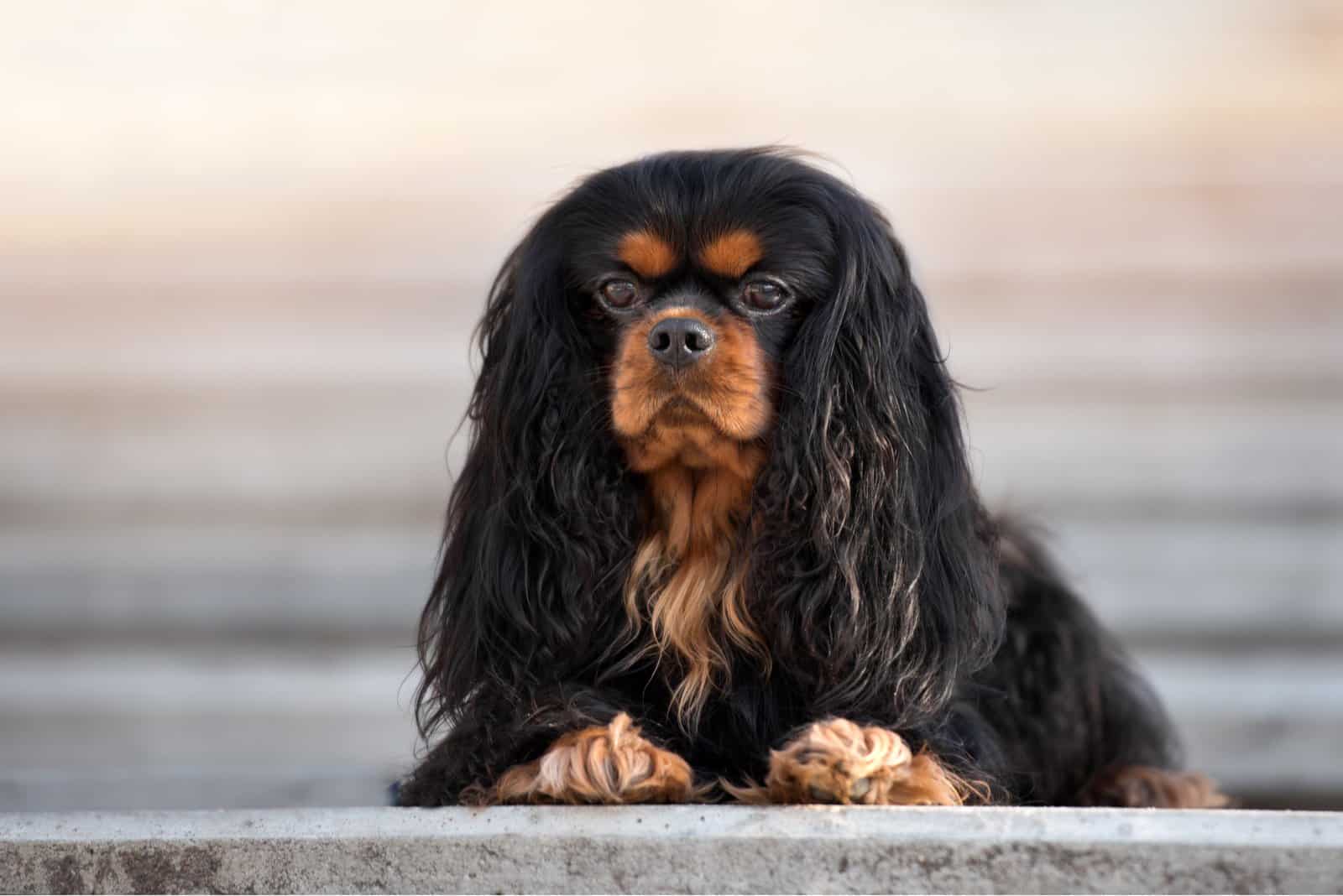 Due to the amount of red pigment, named pheomelanin, tan Cavalier King Charles Spaniels have red-colored hair, which is lighter than the red in ruby Cocker Spaniels.

Tan is one of the colors that is sub-standard. It is not a very common one. Dogs born with this color look so special that you can be sure both of you will not pass unnoticed. 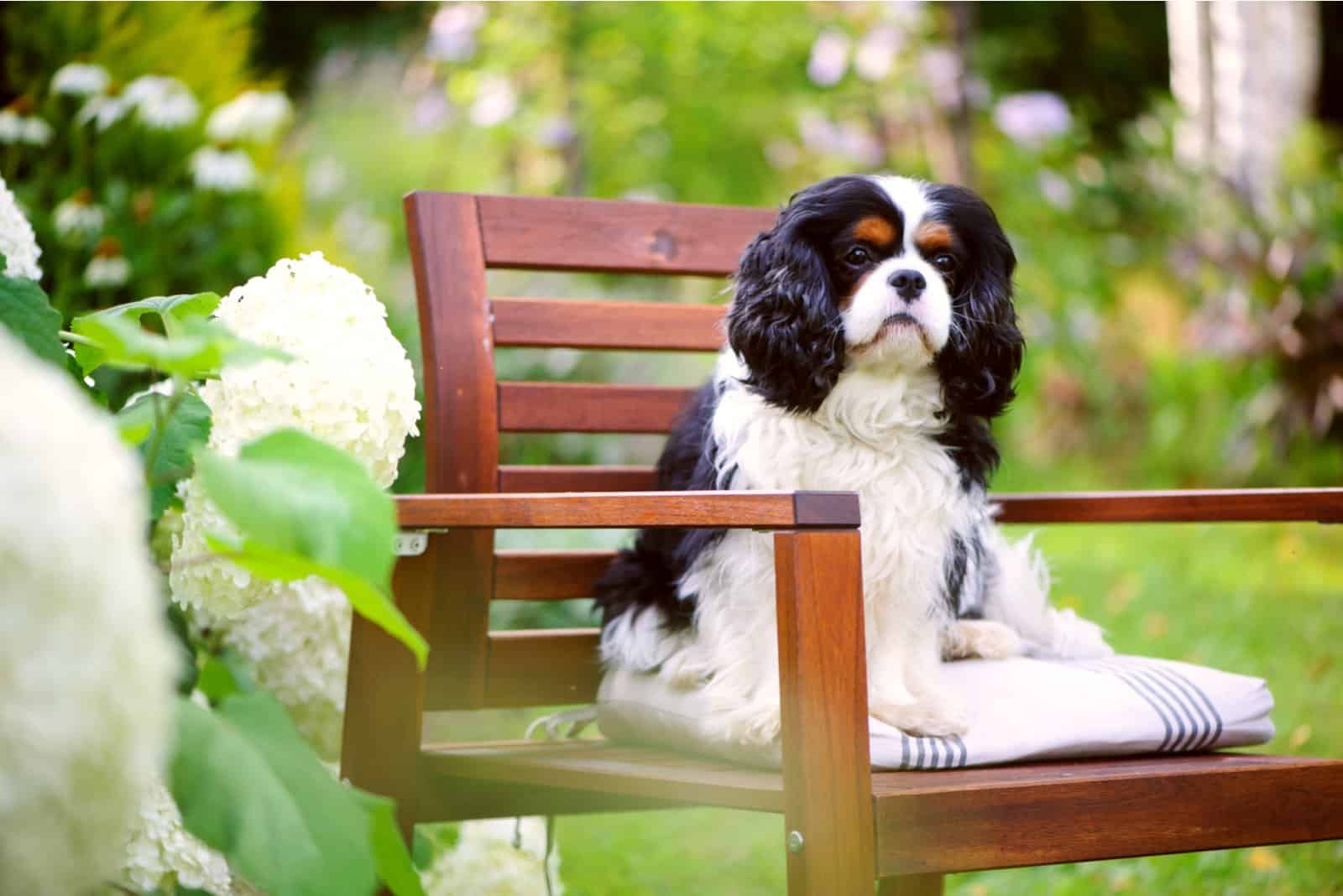 Most often, these dogs have a white base as a coat color, but it can also be black sometimes.

Black markings appear around the eyes and on the ears. These dark areas are divided with a white blaze that stretches from the snout up to the top of the head. These dogs have a large white area from the chest to the neck. Like in black and tan Cavalier King Charles Spaniels, a tricolor also has tan markings on the cheeks and above the eyes, plus under the tail. The markings above the eyes seem like eyebrows.

It is interesting that the colors of tri-colored Cocker Spaniels change the most, where black grows in on the white. 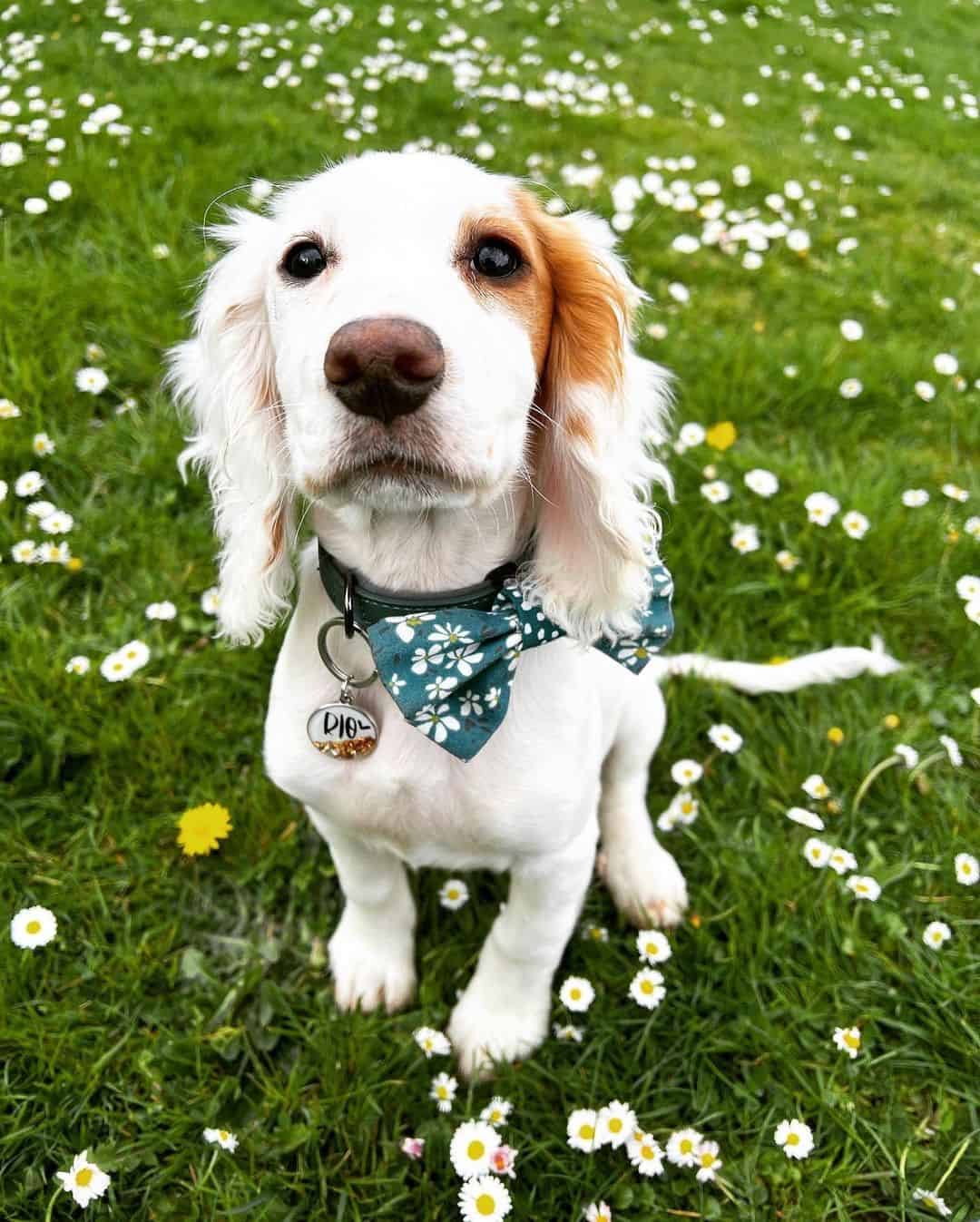 You do not often see a white-colored Cavalier King Charles Spaniel. This is due to the fact that this color comes from a genetic trait, which was dominant before birth.

It is not actually a color, but a lack of it.

When there is no pigment in the coat, the hair turns white, and because of this, the dog is albino.

This phenomenon can be found in all species.

Sometimes, pigment appears in the area around the mug, the toes, and the eyes. 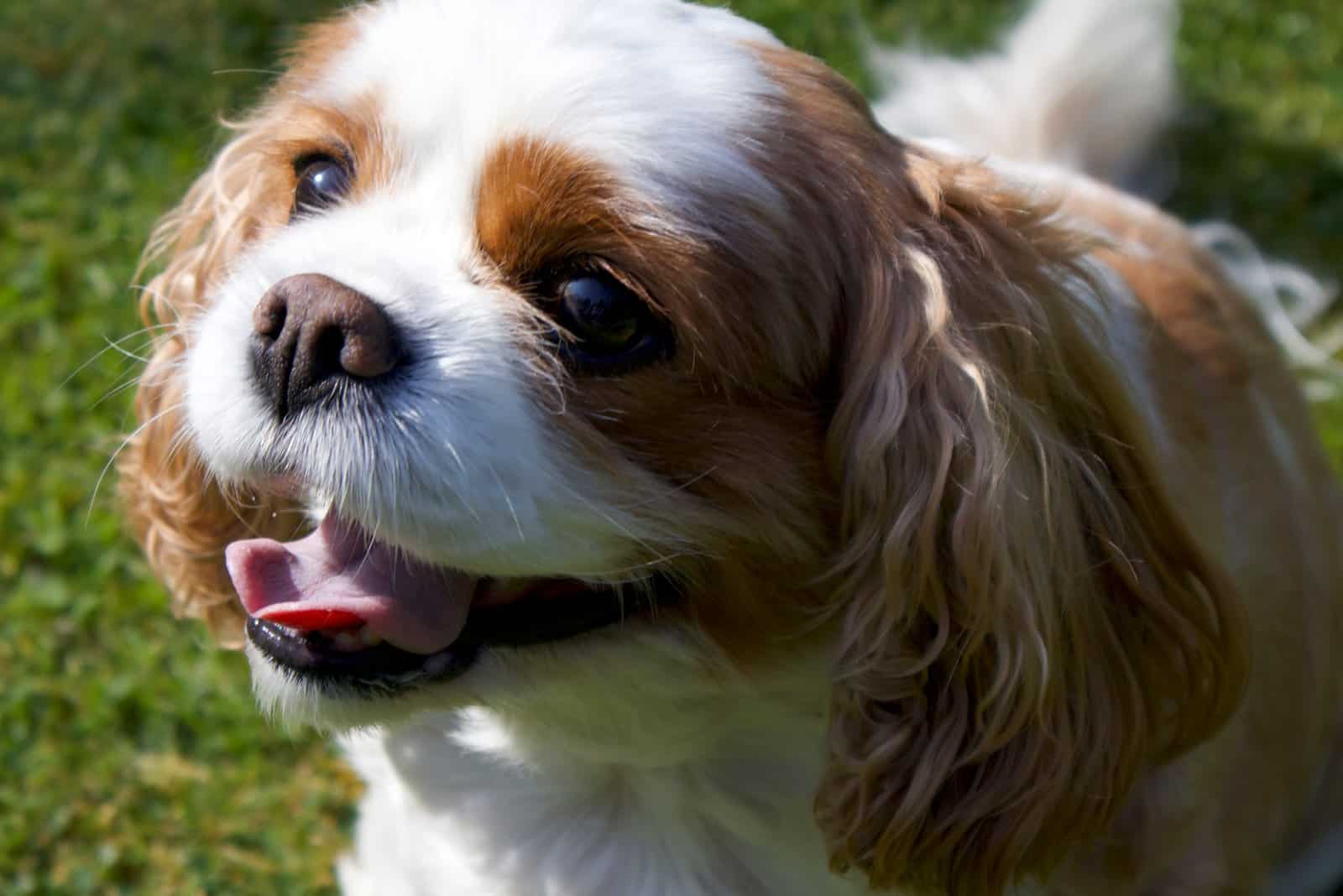 Last on our colorful list are Cavalier King Charles Spaniels with white markings on them.

Due to a certain gene called the Piebald gene, white markings on the coat of these dogs can occur.

Most often, they appear on the chest, toes, face, back, and tail.

This is also a sub-standard color, which is not registered by the AKC. But, that does not take away from the dog’s charm. 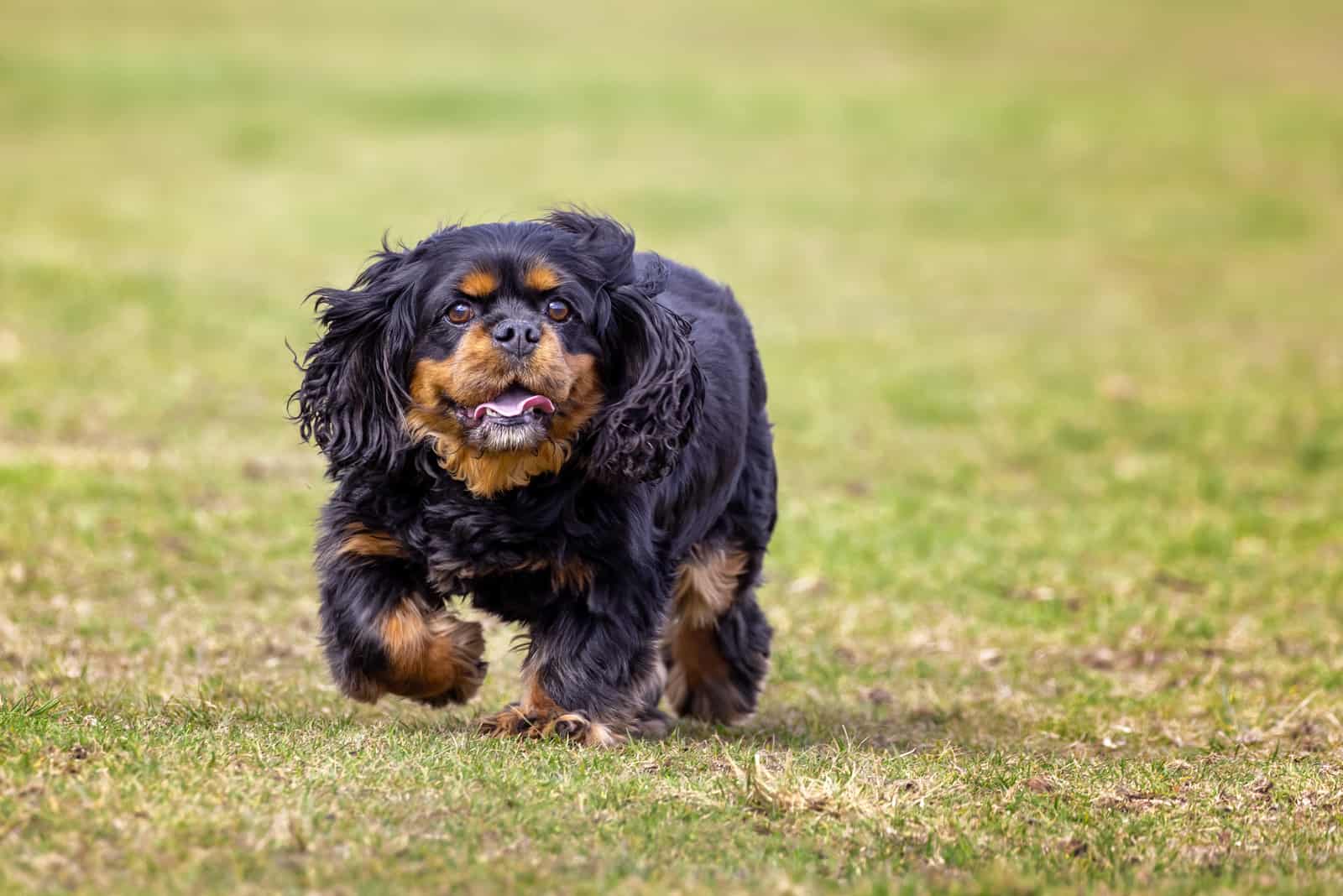 What Is The Rarest Color Of The Cavalier King Charles Spaniel?

The American Kennel Club (or AKC) states that the rarest Cavalier King Charles Spaniel color combination is black and tan, and some consider this color combination as the most appealing one. But, as a proverb says – “in matters of taste, there can be no disputes”.

With that thought in mind, we can agree that we disagree with this statement. Every one of us has a different idea of a beauty standard. But, there is one thing we can all agree with – when it comes to Cavalier King Charles Spaniels, their cuteness will sweep you off of your feet.

What Colors Do Cavalier King Charles Spaniels Come In?

There are four colors that are registered with the AKC as standard Cavalier King Charles Spaniel colors, and those are blenheim, ruby, tricolor, and black and tan.

Blenheim is considered as being the most frequent among the Cavalier King Charles Spaniel colors.

Other colors that have been listed here are considered substandard, which means they can not be presented in conformation dog shows. But, nevertheless, we find these dogs equally beautiful.

A merle color means that the dog is carrying the M Allele of the PMEL gene. This gene is a dominant gene, which means that it will always express itself in a newborn dog. In other words, a newborn dog will have a merle-colored coat.

But, there is a negative side of breeding merle Cavalier King Charles Spaniel dogs. Puppies that carry these genes are at risk of developing a few health issues that are directly connected to the M Locus gene.

The lifespan of these dogs can be from nine to 15 years if they have proper healthcare.

These cute, small dogs come with a silky coat and feathering hair around their legs, chest, and tail, making you want to cuddle with them all the time.

Some of these colors are more popular; some are more or less frequent, but we can all agree that none of them make this breed less popular.

If, like us, you are also a member of the Cavalier King Charles Spaniel club, by which we mean fan club, of course, then you will love them in any color, shape, or size.

19 Schnauzer Colors Your Heart Is Longing For (With Pics)

[…] The wheaten Schnauzer resembles a variety of color shades. Its banded hairs are colored in shades of red, yellow, brown, or cream. The wheaten Schnauzer is more of an orange to golden color variant. Its remarkable color reminds us of a standard Cocker Spaniel or a Cavalier King Charles Spaniel’s colors. […]

[…] speaks volumes when the designer dog breed business has its own line of parent breeds. Their Cavaliers come in many colors, but it is their Cavapoos that take the show. Every puppy has the first round of shots, deworming, […]

[…] canine is known to be an English dog that loves being an indoor pet. Are you a fan of Cavalier King Charles Spaniel colors? Great! This fashionista puppy will perfectly fit into your loving […]

Rhodesian Ridgeback Colors: All Shades Of A Lion Dog

[…] beautiful English dog is a purebred puppy with a gentle and affectionate character. Cavalier king charles spaniel colors are one of the most recognizable traits of this puppy. They appear in brown, white, tri-color, and […]