Everyone knows what a standard Poodle looks like. We imagine a black or grey dog with a peculiar hairstyle and elegant poise.

Did you know that, according to the American Kennel Club (AKC), Poodles can come in around ten different shades, and a coat of a single color is just one of many options?

A Poodle’s coat color can come in apricot, sable, parti, merle, tri-color; there are even some red standard Poodles that look truly elegant.

But the most eye-catching ones are all of the several variants of phantom Poodles!

But what are some standard phantom Poodle colors? Is this a typical pattern in this dog breed?

What Is A Phantom Poodle? 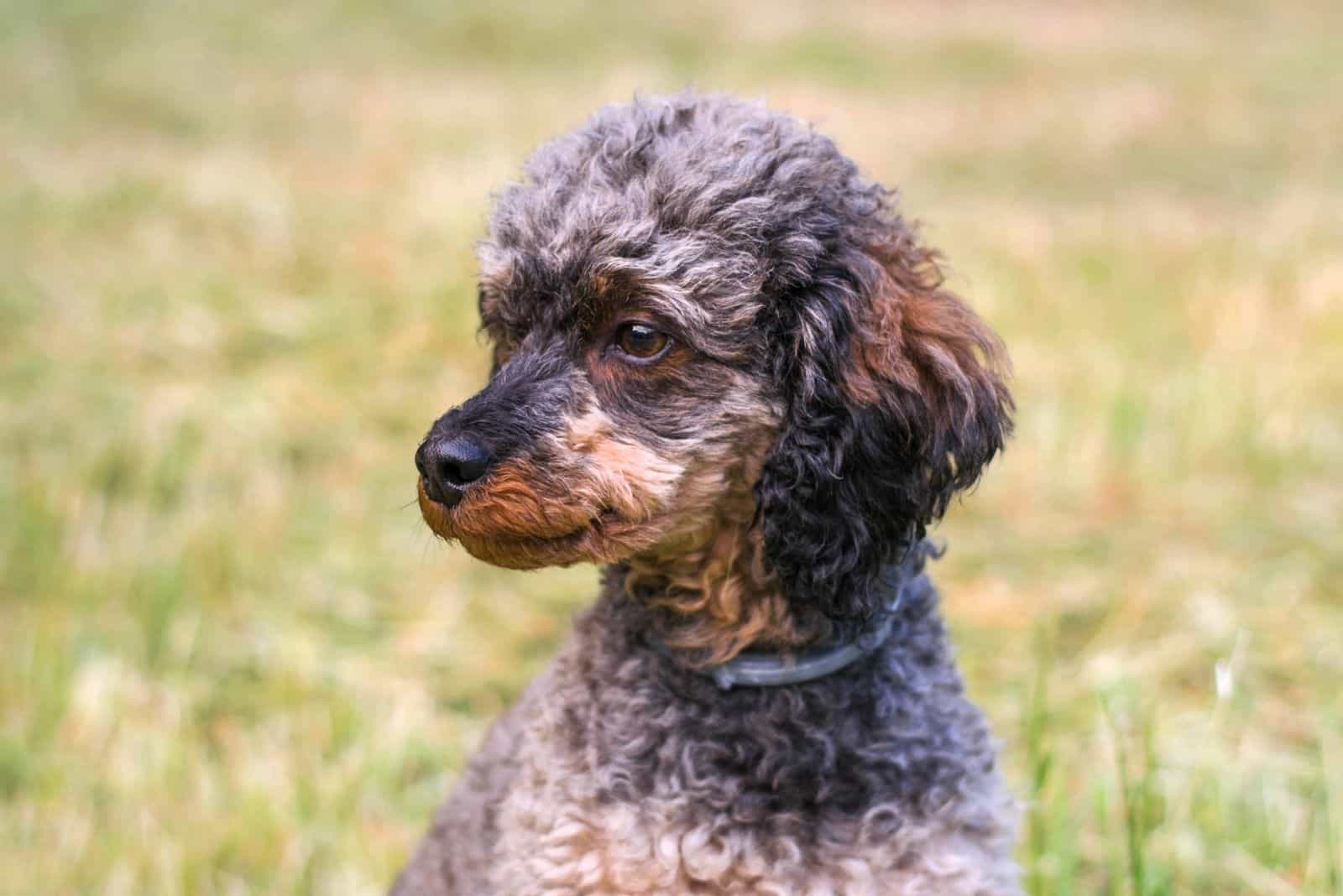 Phantom Poodles are not some new dog breed, but rather a regular Poodle with a specific pattern.

According to the AKC, standard Poodles can’t come in this color, but this doesn’t mean they don’t exist. In fact, many Poodle breeders prefer this pattern over many others.

Poodles are one of the most popular family pets in the USA and globally. They have long curly coats that come in many different colors and don’t shed a lot.

This makes them a rather attractive option for many people looking for a new puppy.

While you can choose from many recognized colors, there is something special about a phantom Poodle.

In fact, this pattern is slowly but surely becoming one of the most sought-after Poodle colors.

However, phantom markings have been a topic of several hot confrontations, as some experts argue if they even exist.

Many believe that they are simply a subset of parti Poodles, as the pattern is somewhat similar.

For example, both have one primary color – also known as a dominant color – which is typically black.

Still, some differences in the markings are easy to notice, even at first glance.

Phantom Poodles have what is known as Dobie markings (named after the Doberman breed).

You can see the same pattern on some other breeds, such as Yorkies, Dachshunds, and some Spaniels and Coonhounds.

These markings have to be located above the eyes, on the sides of the muzzle or cheeks, across the chest, under the tail, and down the legs. 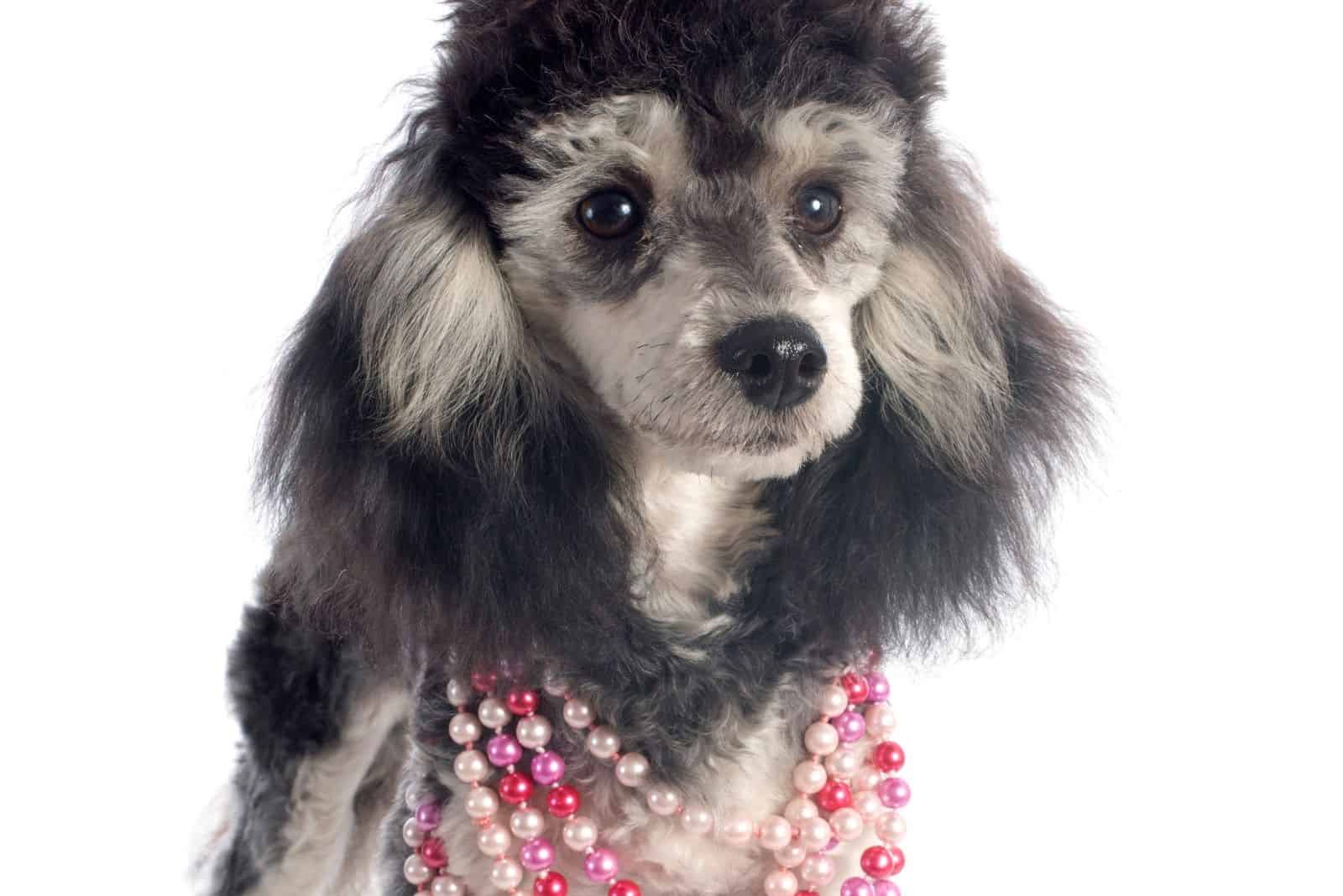 While phantom Poodles are rare, you can find them in dogs of all sizes. The size of the dog and the color of its fur aren’t necessarily connected.

How large a dog will highly depend on the parents and their genetics.

Whether a phantom Poodle will be considered a toy, miniature, moyen, or standard is actually determined by the dog’s average weight instead of height.

For example, toy phantom Poodles will typically weigh no more than 10 lbs, while a standard phantom Poodle can weigh up to 70 lbs! 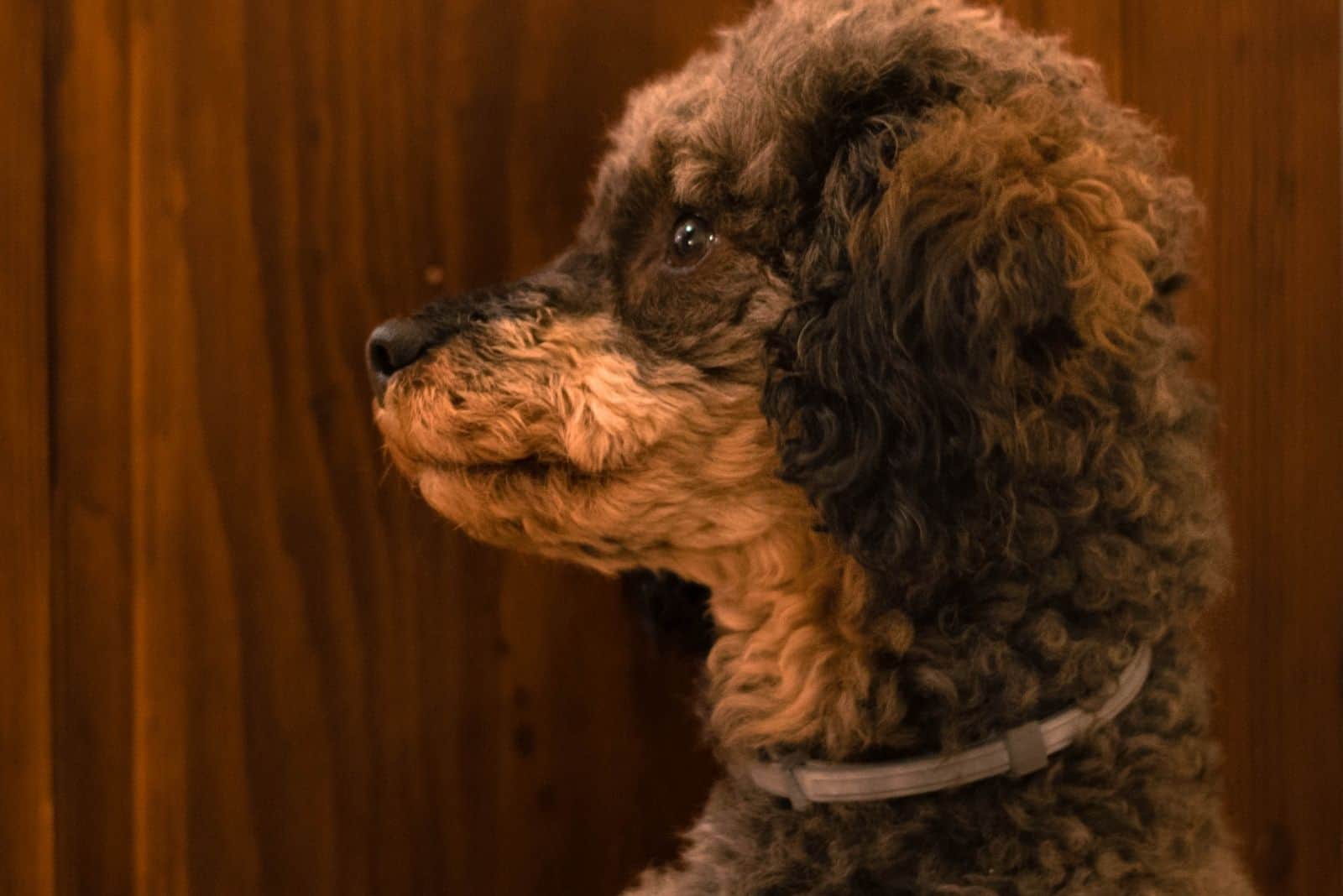 Phantom Poodles are unique no matter their coloring. Still, the large number of shades available certainly makes them even more special.

Standard Poodle puppies are born with their phantom markings. These aren’t patterns that just appear over time as the dog ages or reaches adulthood.

While phantom Poodles come in various colors, all still have specific light markings on their faces, stomachs, and legs.

Certainly, the most unique pattern is the one above their eyebrows. Standard phantom Poodles tend to look surprised all the time or even angry!

They have a human-like expression, which might be another reason why they are so popular. 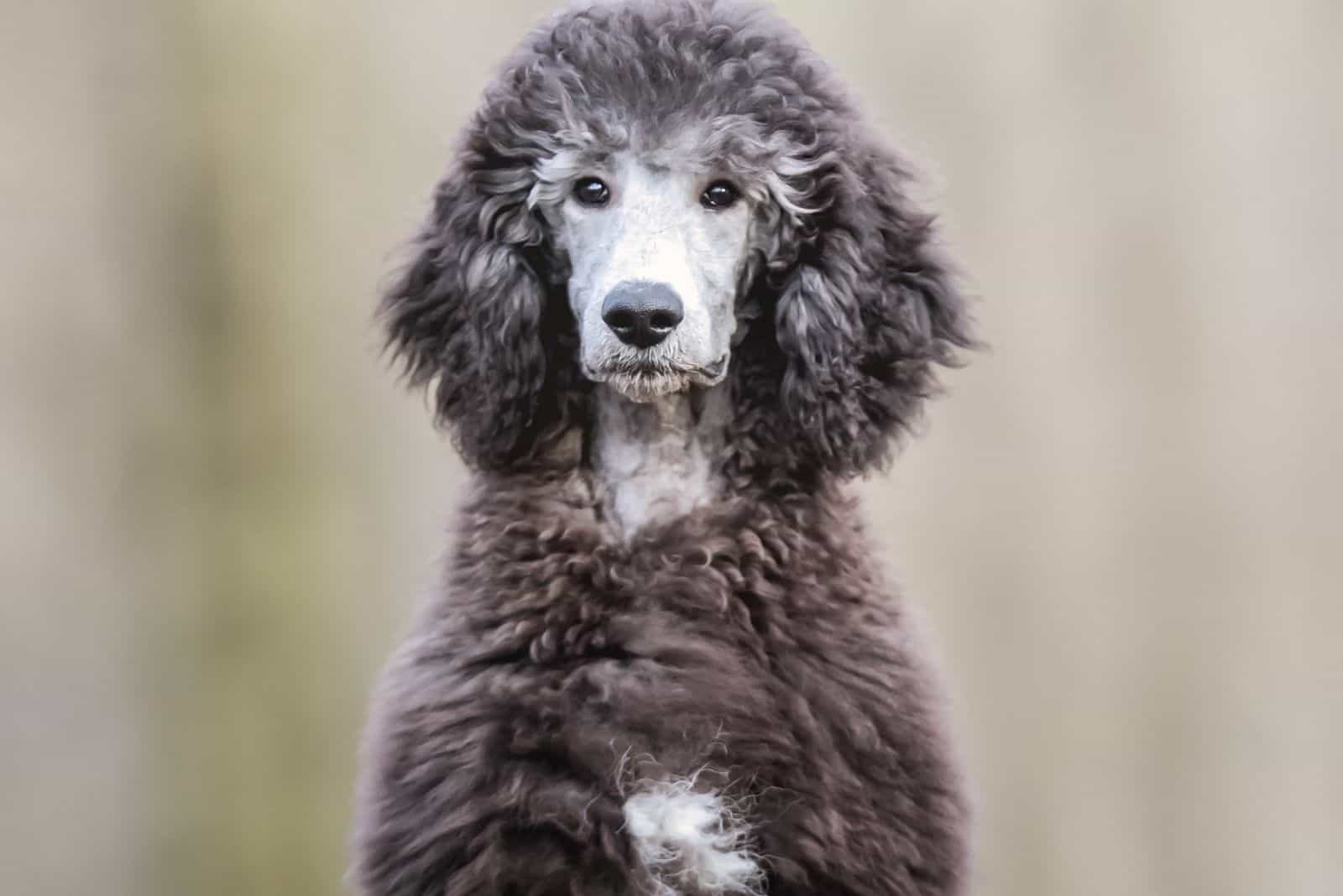 Now that you know how phantom Poodles look, you’re probably wondering why they are so rare.

The reason lies in their genetics.

What makes phantom Poodles what they are, is the ky/ky genotype or gene combination.

This genotype is necessary for colors other than black to show on a single-colored Poodle.

Only all of these genotypes combined can get you a phantom Poodle.

However, even on such occasions, there is no guarantee that the puppy will have phantom markings. 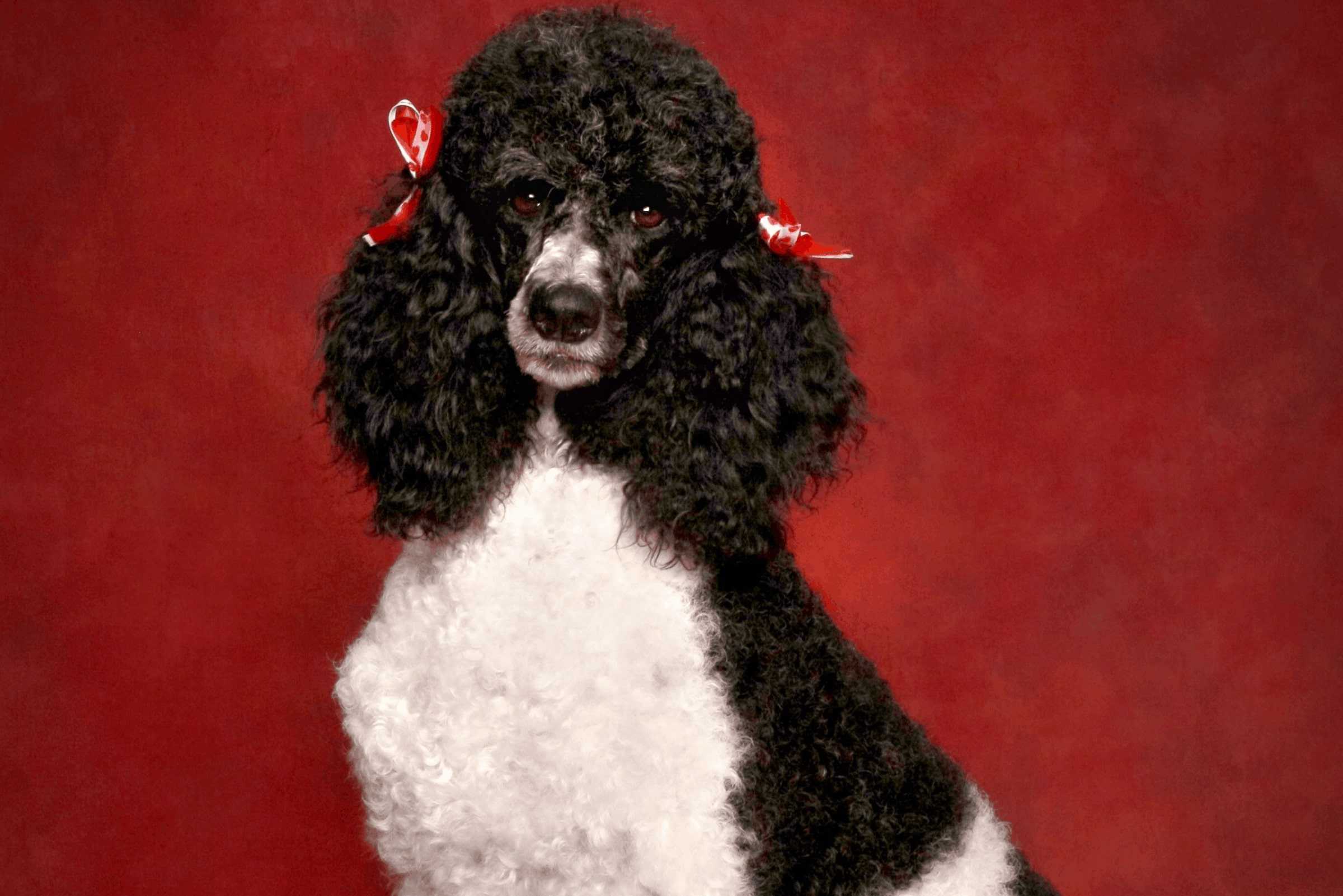 While we have already mentioned the hot debate between people believing that phantom Poodles are just variations of parti Poodles, some differences still exist.

So, what are the differences between phantom and parti Poodles?

Parti poodles have random patches of different colors that look as if they were splattered all over a dog’s coat.

These markings are unique for every dog, and you can’t predict how they’ll look – however some patterns, such as tuxedo, still exist.

On the other hand, a phantom standard Poodle will have markings located on specific parts of its body. Not just that, but these parts can fade in and out over time, depending on the coat type.

If you want to know whether you’ll be giving a phantom or a parti puppy a new home, you might want to check out the bloodlines of your future pup.

Parents are the main predictor of how a dog will look, whether you’re getting a miniature Poodle or a mixed-breed such as Bernedoodles, Labradoodles, or Great Danoodles. 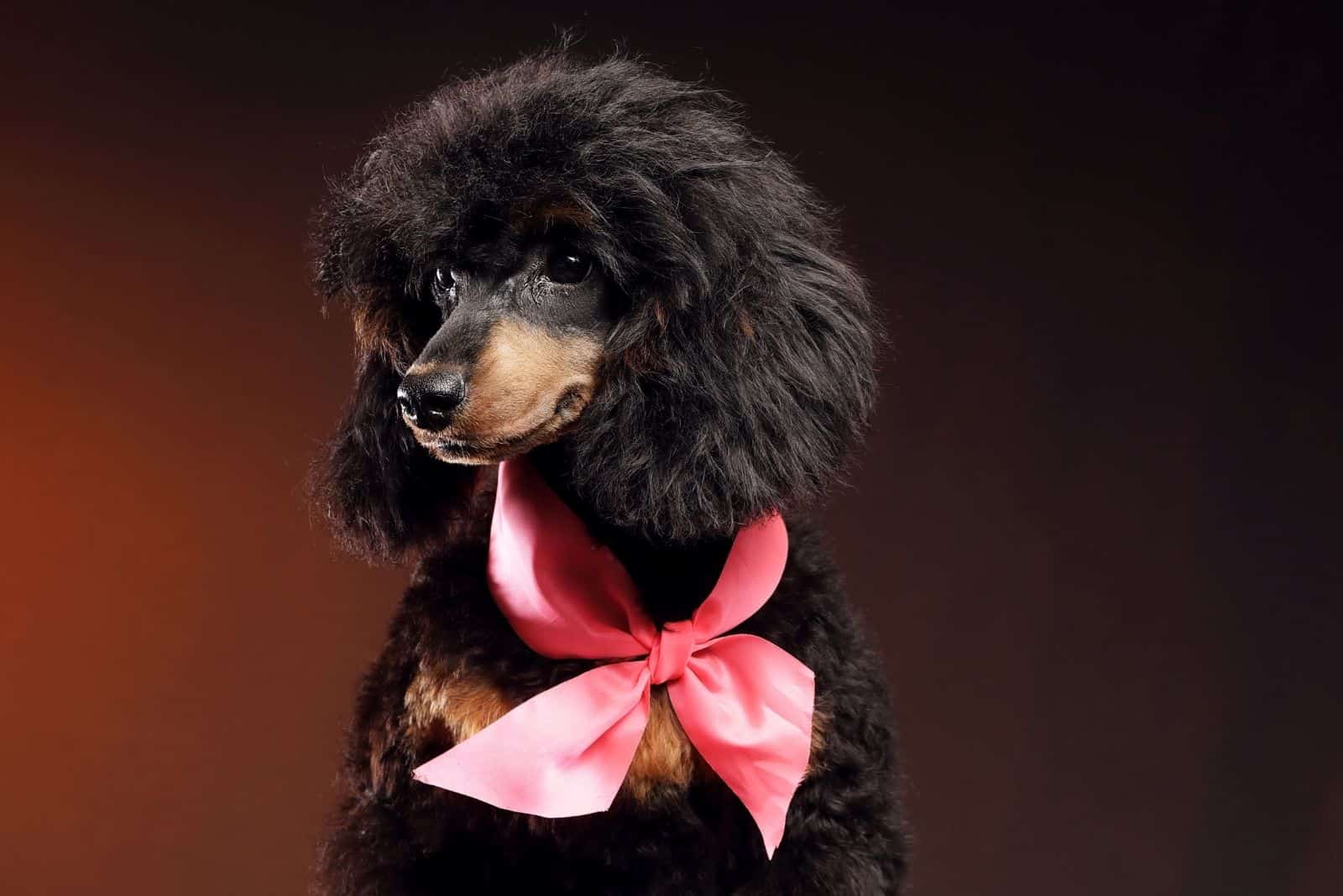 Phantom Poodles are still Poodles, despite their unique coloring. This means they have the same health issues as other Poodles.

If you’re considering getting a new puppy, there are some things you should think about regarding the overall health of this breed.

Poodles typically live up to 13 years and are reasonably healthy dogs. However, they are prone to some conditions and diseases, such as:

All of these conditions don’t necessarily have to affect the life span of your Poodle, as long as you take good care of your pup.

However, there is one problem concerning phantom Poodles.

Sometimes, when a new sub-type of a breed appears, organizations such as the UKC may forbid these dogs from breeding outside of their sub-type.

This leads many breeders to breed closely related dogs. This activity was widespread in Germany, one of the countries where the Poodle is among the most popular breeds.

While inbreeding is deemed unethical, it isn’t technically forbidden by law. Breeders tend to walk a grey line and still breed their dogs using this method, which is also a way of ensuring all puppies would be Phantoms.

Sadly, though, inbreeding leads to many deformities, such as an underdeveloped lower jaw, inadequate number of teeth, overbite, premature color fading, even heart conditions!

This is because inbreeding creates a closed population without any new genes that might help puppies get over some genetic conditions.

Always check your breeder out before making a purchase. A seemingly healthy pup might end up having severe health issues just a few years down the road.

Sure, you may be impatient, but it’s the best way to know the breeder is taking their time and doing the best they can to create healthy phantom puppies. 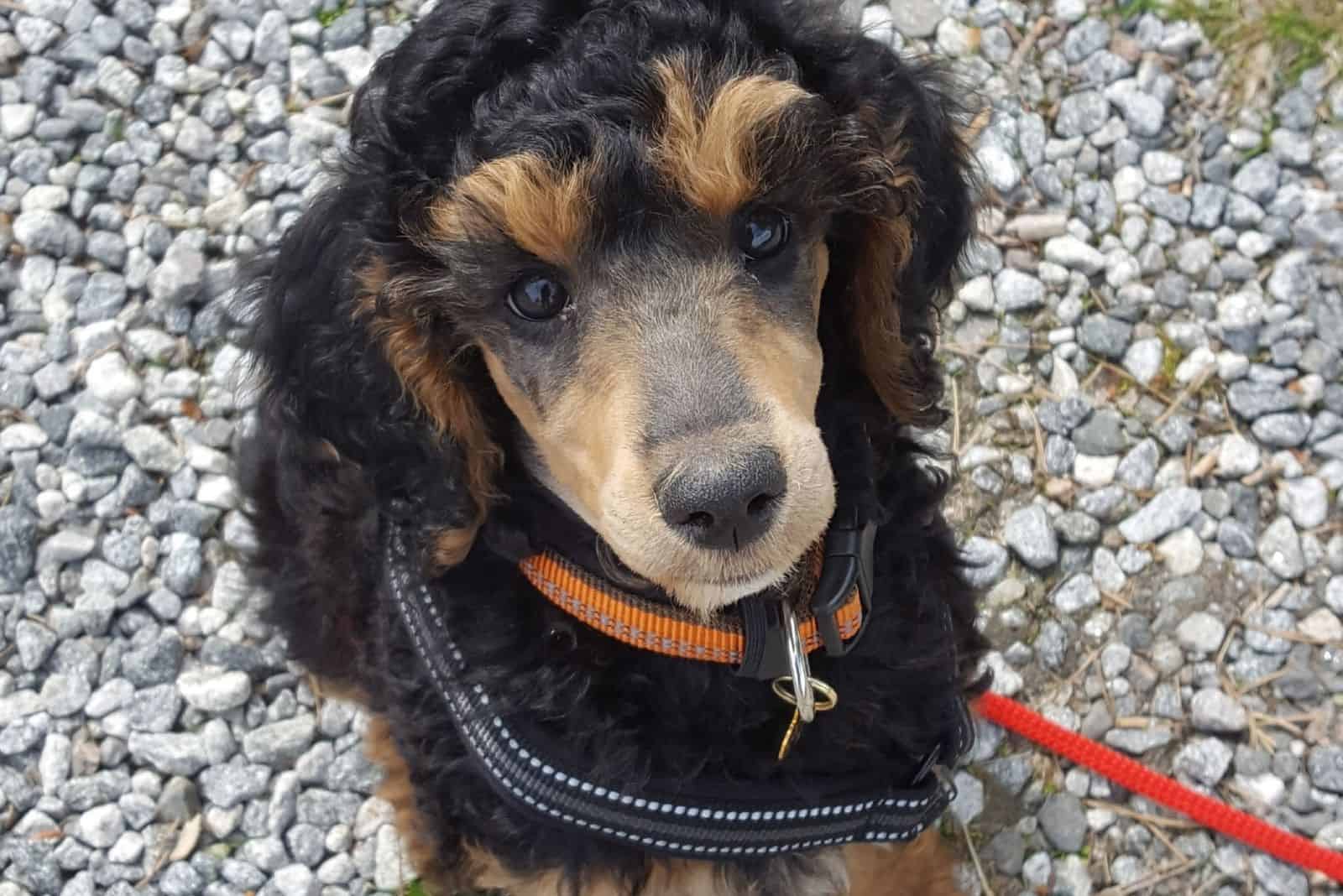 Since phantom Poodles are adorable and rare, they are also very expensive. In fact, they are one of the most pricy types of Poodles.

Keep in mind that the AKC Conformation Ring doesn’t accept this type of Poodle, which might be a turn-off for some.

Considering the price of a phantom Poodle, we’d suggest you get some kind of insurance for your pooch.

As they can develop certain health complications, insurance is never a bad thing. 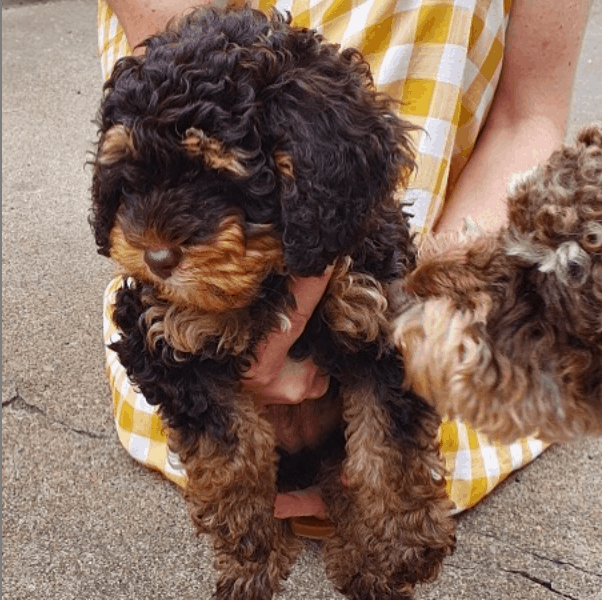 Now you know all there is to know about the unique coloring of a standard phantom Poodle, but do you know how to take good care of your pup?

If you’ve bought your new pet from a reputable breeder, you have one less thing to worry about, and that is the Poodle’s health.

This means you have more time to dedicate to raising your little phantom.

While Poodles are friendly dogs, socialize them to ensure they have been exposed to all the necessary stimuli and remain engaged while also able to interact in a friendly manner with others – when you allow them to do so.

The best way to do this is to take your pooch to a doggy park – just make sure you follow their vaccination schedule!

Otherwise, you’re exposing your companion to many contagious diseases.

Feed your puppy the right kind of nutritious food. Just remember that puppies tend to eat as much as you give them!

Control the portions; otherwise, you might end up with an overweight pup.

Overall, standard phantom Poodles are no different than regular Poodles. Their genetics, however, give them an exciting pattern that makes them look as if someone painted them!

If you get this dog as your pet, be ready to have all the passers-by ask you many questions about the breed.

If you’re looking for a dog with beauty, intelligence, and gorgeous fur – which is also hypoallergenic – then you should check phantom Poodles out!

•  9 Poodle Breeders In Wisconsin You Can Get Your Poodle From 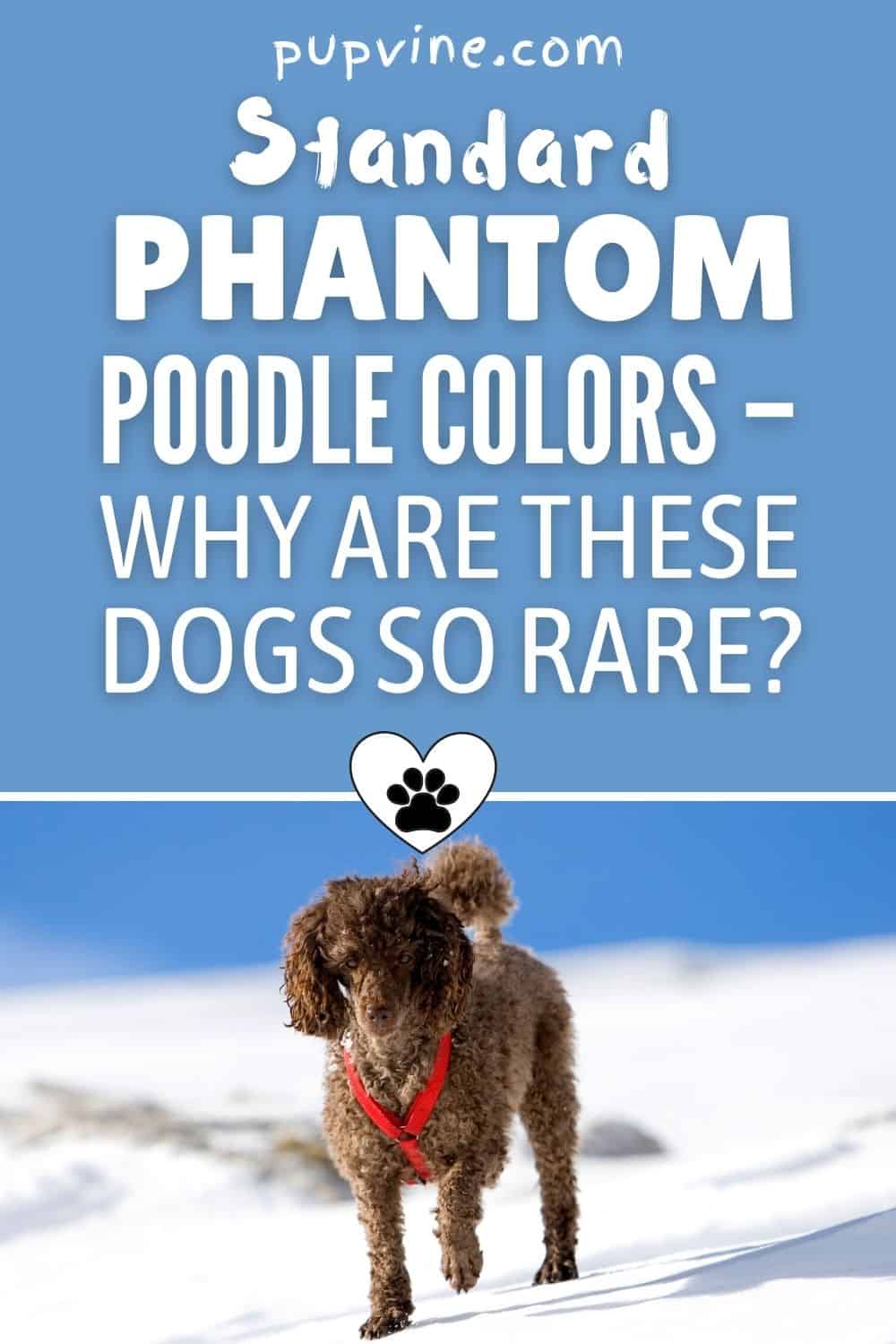 Golden Mountain Doodle: Everything You Need To Know

[…] dog breed is a complicated cross of a golden retriever, a Bernese mountain dog, and a poodle. This makes them a great pet both in terms of personality and the amount of care they […]

Pitbull Poodle Mix: All Information On The Pit Boodle

[…] it has to have distinct colors in specific areas of its body. This pattern is inherited from a phantom Poodle, as the pattern doesn’t exist in […]

[…] are three sizes: toy, mini, and teacup. As Standard Poodles are rarely used, if ever, there isn’t a Standard […]

Phantom Poodle - The color and beyond