Every Mini dog is nowadays the center of attention for modern dog owners. By modern, we mean dog owners who are living in those hectic surroundings of city centers. Nowadays, buildings and apartments are getting smaller and smaller, therefore the need for smaller companions is justified.

However, our Mini Newfy is, at least, an interesting dog breed. It has two dog breeds as parent breeds that you probably wouldn’t think could possibly be mates.

Mini Newfiedoodle puppies or the Mini Newfypoo Puppies are the same dog breed, don’t worry. People just call them different names because of their doodle ancestry. Both names are equally used and equally valid.

What Are Mini Newfypoos? 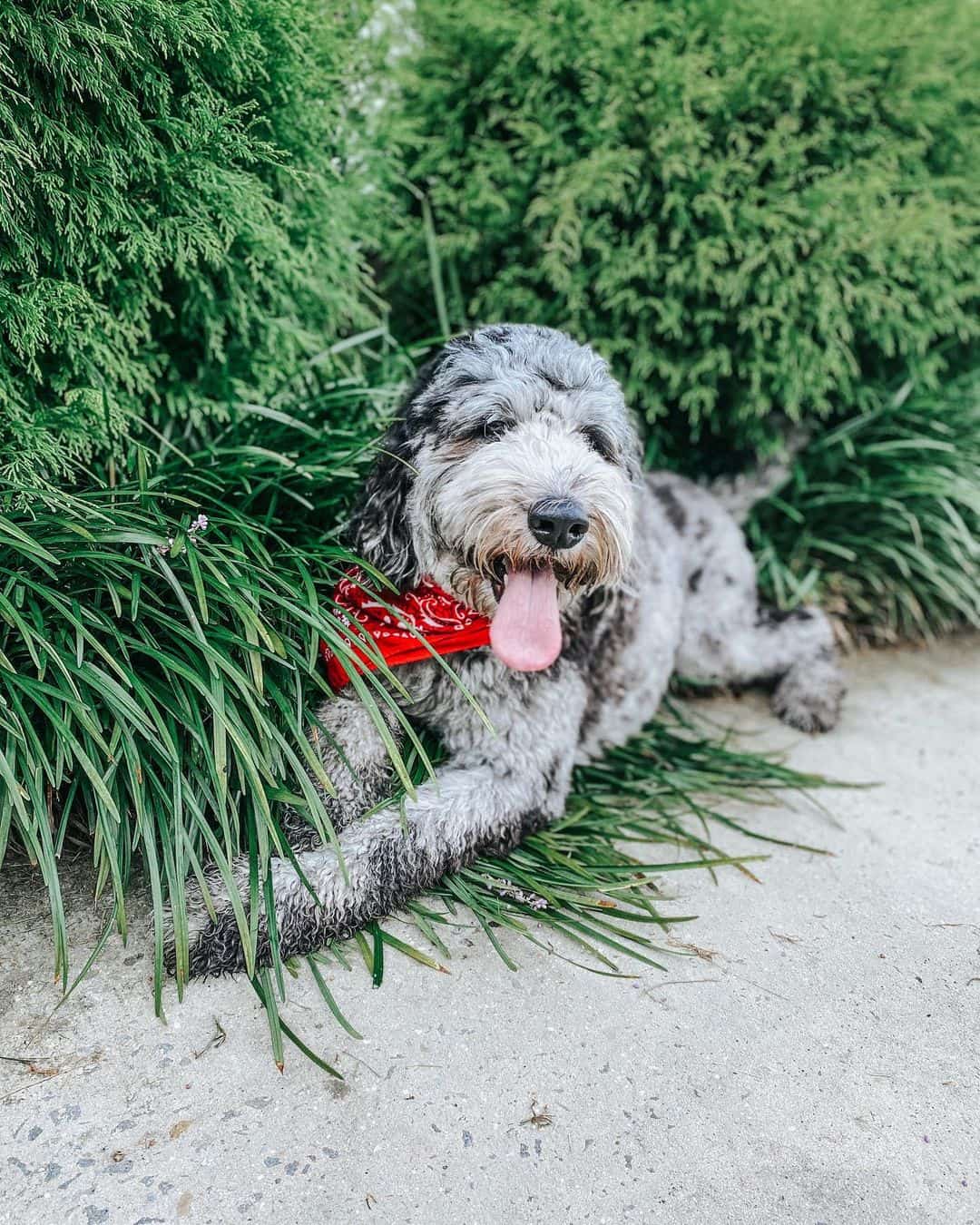 The only hint that I will give you at this point is the name decoding of: Mini + Newf + Poo.

The breeders probably wanted to create the curliest and the fluffiest crossbreed dog when they had in mind mixing the two dog breeds that we will discuss a bit later.

When talking about the origin of a crossbreed dog, the newfypoo’s parent breeds must be the ones whose origin we discuss first.

The dog breeds that are known as the parent breeds of the Mini Newfypoo or the Mini Newfydoodle puppies are the Toy Poodle and the Newfoundland dog.

There are also Newfypoo dogs, without the prefix mini. That is when the Newfoundland dog is bred with the standard Poodle.

As you know, the Newfoundland is a large dog, and the Toy poodle is a small dog. However, there are certain breeders that crossbreed the Newfoundland dog with the standard Poodle, to make the designer dog a bit more acceptable and easier to mate.

Therefore, in order to create this Mini Newfypoo, the dog breeders decided upon breeding the Mini Newfoundland and the Mini Poodle.

Breeding large dog breeds with small dog breeds is often not easy and unrewarding – big dogs such as Newfoundlands and Miniature Poodles crossed together is, well, pretty unimaginable.

What Is A F1b Newfypoo?

We need to make a distinction between the parents’ participation or the involvement of the parent dog breed genes in the future puppy litter.

The f1b Newfypoos are considered to have 75% of the involvement of the mini Poodle genes, which means that most of its ancestry is predominantly Poodle.

A Standard Newfydoodle, sometimes known as the Newfypoo, are crossbreeds of Newfoundlands and Standard Poodles. Newfiedoodles are bigger and gentler than many other doodle breeds, such as the goldendoodle or the bernedoodle.

Bernedoodles are also considered hypoallergenic dogs, much like the Mini Newfypoos!

Does It Look More Like A Toy Poodle Or A Newfoundland?

The Mini Newfypoo Puppies or the Mini Newfydoodle puppies are a great mirror of their parent breeds – both look-wise and personality-wise.

The Newfoundland poodle mix creates a smaller dog breed, because of the parent breeds being the Mini Newfoundland and the Mini Poodle or the Toy Poodle.

The doodle breed’s genes are winning the fight here when it comes to the looks of the Mini Newfoundland. However, this dog breed does have more of a Newfoundland head shape, with a mizzle that is not as elongated as Poodles tend to have.

Also, they are often black, which is one of the most famous Newfoundland colors of the gentle giants. The Newfypoo dog has long, very curly hair, which is also a low shedding type of dog coat.

They have rounded eyes which are typically brown, hazel, or even black. They can often have a white coloured patch around the chest area, which is something that is common to the Newfoundland dog.

How Big Does A Mini Newfypoo Get?

Their height and weight varies, as there aren’t any official standards for this dog breed, since it is not a dog breed approved by the American Kennel Club.

However, it is usual that this dog breed weighs from 25 to 50 pounds and that is from 15 to 19 inches in height on average.

However, this dog breed is considered to be one of the best poodle mixes, because of the well liked personality of this dog breed.

What Kind Of Personality Does The Mini Newfypoo Have? 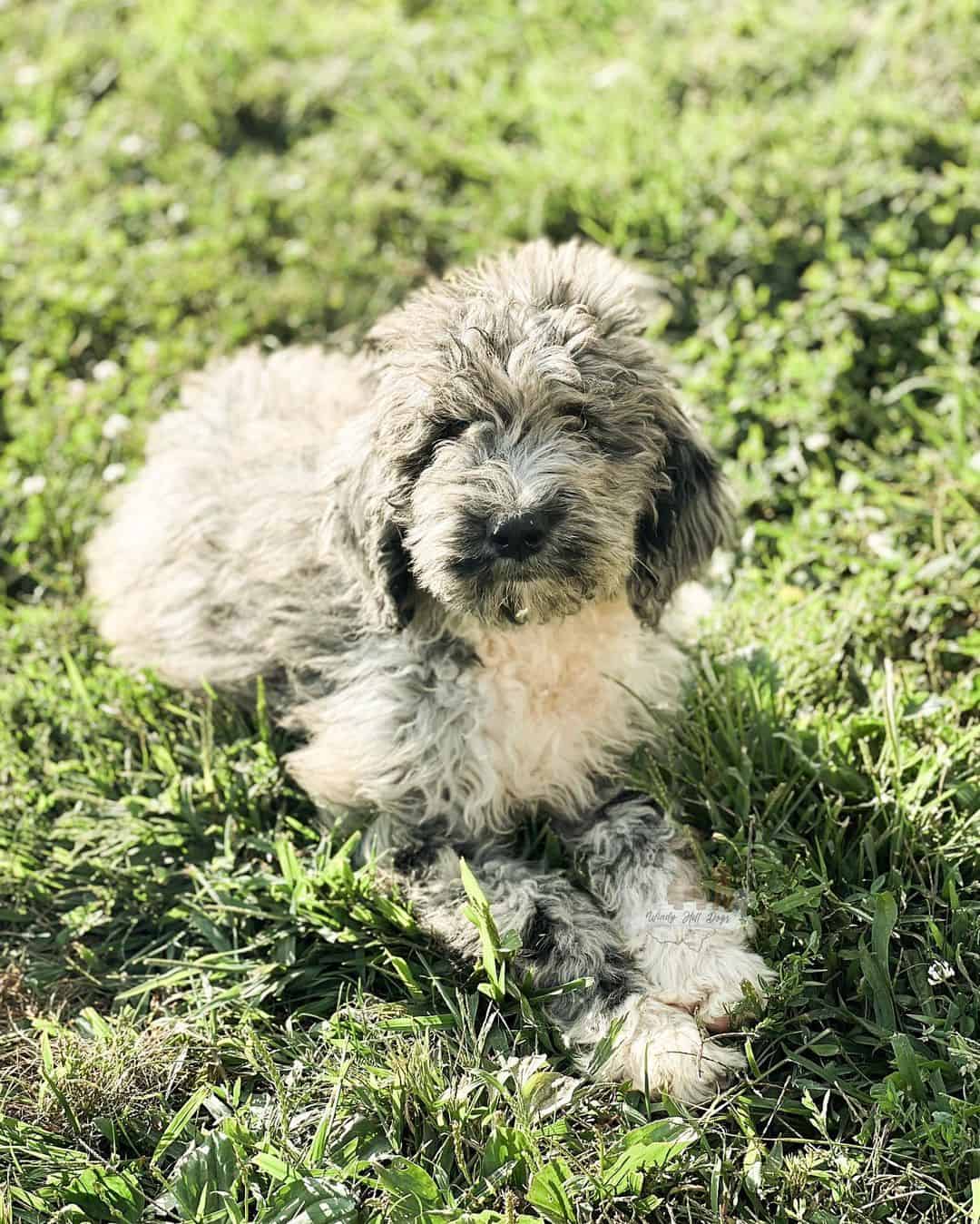 This family dog has a personality that you could only wish for. Getting a new puppy of this dog breed will be a great experience for the whole family, since they have obtained a vast number of great personality traits from both of the gentle giants and the miniature poodles.

One of their parent breeds is not called a gentle giant without a purpose. Maybe this dog breed is not a giant, but they are extremely gentle.

They would make a great watchdog because of its Newfoundland dog genes. That parent dog breed is a watchdog by its profession, therefore, this dog will be a great alarm dog in the event of some potential (we hope that it won’t happen though) intruders.

They have an ideal personality for being around both young children and older children. The teacup poodle genes make it a smaller dog breed, therefore if the Mini Newfypoo turns to be on the smaller size, you will have to teach your kids to be gentle with it.

The fact that Mini Newfypoos and mini Newfydoodles are family-oriented and easily bond with their owners makes them well known as companion dogs. In general, mini Newfiedoodles are bigger and gentler compared to other doodle breeds. They present a loving, devoted, watchful, and amiable disposition.

Do you recall that defending quality we described earlier? Many owners claim that their Mini Newfypoo makes a great guard dog: their Newfoundland heritage creates it. These canines were raised to guard farms and cattle. And a large portion of those genetic traits were passed on to their descendants who were hybrids.

Is The Mini Newfypoo A Healthy Dog Breed?

The Mini Newfypoo dog breed is generally considered a healthy dog breed. They don’t have any major health issues.

The one health issue that they sometimes have problems with is – you guessed it – hip dysplasia.

Hip dysplasia is defined as “abnormality of development.” A hereditary disorder known as hip dysplasia in dogs is characterized by a propensity for the early development of hip laxity. Since negatively affected canines are born without normal stem hip joints, a disorder is not a congenital condition.

Within the first few weeks of life, the tissues in the body (connective tissue and patella) that ordinarily stabilize the hip joint become loose. The ‘ball and socket’ hip joint, which is typically quite congruent, becomes significantly less congruent as a result of this laxity.

What Is The Life Expectancy Of A Mini Newfypoo?

The average life expectancy or the lifespan of a Mini Newfypoo is from 10-14 years.

To achieve a longer lifespan for your dear companion, you will have to give it the best quality dog food, regular yearly vet checks, and exercise – you will have your companion for at least 12 good years.

Having in mind their general wellbeing and health, their life expectancy is not something that is of a surprising nature. Both of the parent breeds are considered to be healthy dog breeds, therefore, the Mini Newfypoo is a healthy dog breed with a great lifespan.

The majority of human allergies to pets are brought on by dander, which sticks to pet fur. Although truly hypoallergenic dogs don’t actually exist, there are many breeds that allow those with allergies to still enjoy a dog’s company.

When you own a dog, there are additional steps you can take to prepare your house to assist in reducing allergens. Don’t let your pet sleep on your bed, give them regular baths, and wash their bed frequently. Getting rid of thick carpets and curtains that might collect dander is also beneficial.

This is one of the pros of owning a Mini Newfypoo puppy – these dogs are considered to be one of the hypoallergenic dog breeds.

There are dog breeds that are significantly less allergenic and better suitable for people suffering from allergies, even though no dog is completely hypoallergenic. These dogs produce less dander thanks to their low shedding coat.

Thanks to the poodle genes, this dog has inherited the hypoallergenic coat that does not shed much hair.

However, they do shed dander and hair but in less capacity than the rest of the dog breeds that are not considered hypoallergenic. You can also check on other hypoallergenic dog breeds.

How Much Are Mini Newfypoo Puppies?

It is hard to find newfypoo puppies for sale that are of a lower price. Feeding requirements, however, can be somewhat expensive. Not to mention, larger dogs require more expensive grooming. Compared to other small to medium breeds, the typical amount of cash you may spend on a Mini Newfypoo will be more.

A Mini Newfypoo puppy can cost between $1,300 and $2,000 in price. The price can be higher when the dog is of a rare coloured coat, such as chocolate or golden/champagne. Also, females are also more expensive than the males, therefore, if you are buying a female puppy, expect to pay at least $100-200 more. 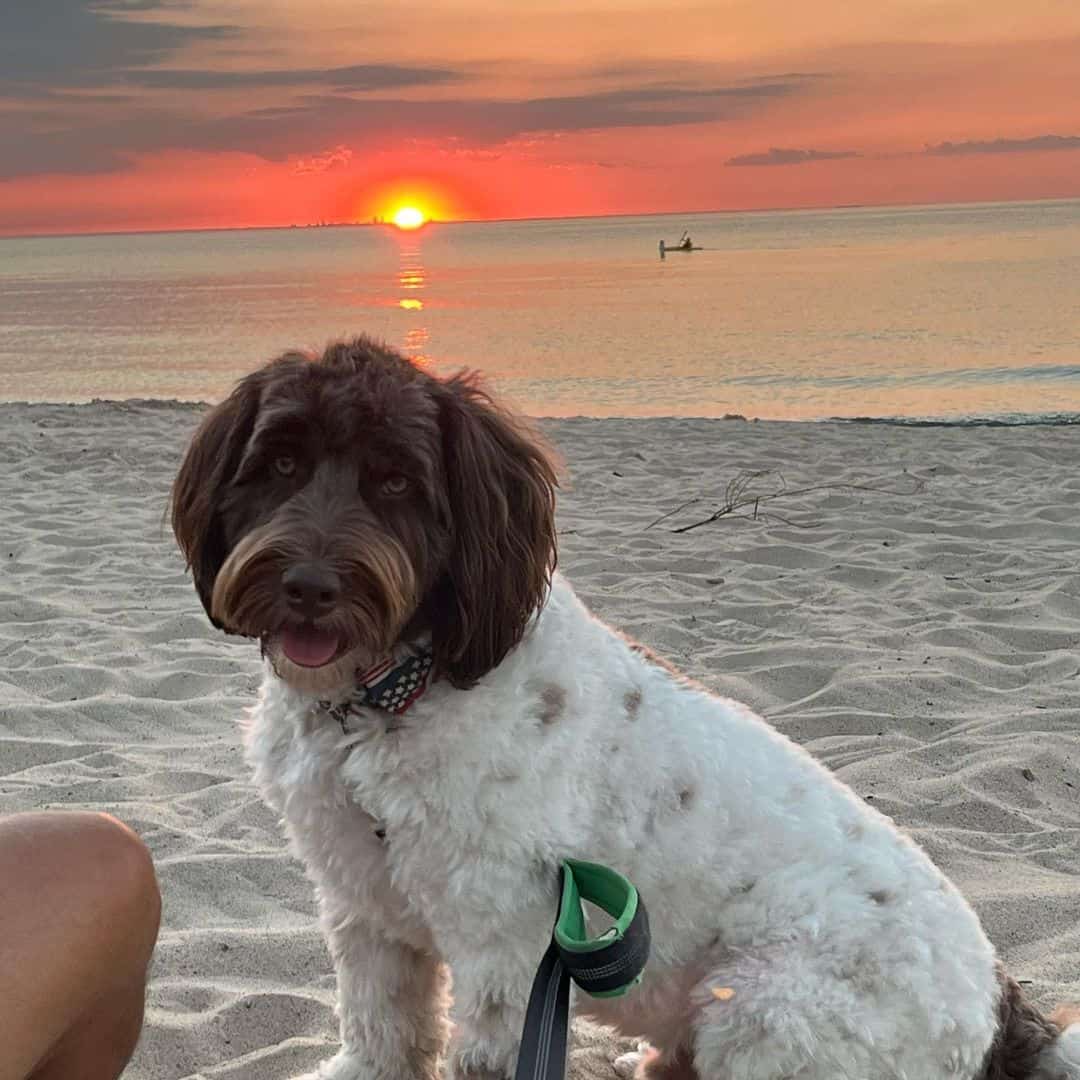 The perfect owner of this species is a person who has the time and enthusiasm to invest in their training, exercise, and socialization. They require a caregiver who is committed to maintaining their physical and mental well-being through frequent outings, playtime, and cuddling.

They don’t make the best jogging partners, but they do adore swimming, so someone who could plan some regular time in the water on their behalf would be ideal.

This dog breed is considered to be one of the best Newfoundland mixes!

And despite their kindness, don’t believe that Newfypoos would run from danger; they have a strong sense of loyalty to their family members and will defend them if they feel threatened. Their loud, low bark can also protect your family, house, and possessions.

Having a Newfiedoodle puppy would be a great addition to any family, because these dogs are great family dogs. They will always stay by your side, and enjoy any kind of activities with you, and spending time with you in general.

They are a healthy dog breed, suffering only occasionally from hip dysplasia. They need a bit of grooming, but that is the least that you can do for them, since they are a low shedding dog that has hypoallergenic fur.

You will have to spend around at least $1,500 on a Mini Newfypoo puppy if you are to buy it from a reputable breeder.

The parent breeds of this dog breed have really made an almost exclusively well-tempered dog breed that is great with both kids of a younger and/or older age. They will be happy to accompany you even on the longer walks, if you are the type of person that prefers high-energy physical activities.

Read Next: 7 Newfypoo Breeders With The Doodliest Doodles