Getting a Goldendoodle puppy can be really confusing. All of the F’s and b’s can be somewhat tricky to understand, which may lead dog owners to stay away from doodles altogether.

Is an F1 doodle really better than an F2? Which of the F’s is the best for allergy sufferers? What generation of doodles is represented by which number and letter?

All of these questions are related to doodle generations. But fear not, we are here to explain everything you need to know.

Unraveling the mystery of which generation of doodle one actually owns can be a tough task even for experienced Goldendoodle owners. So what is the deal?

It all comes down to the same formula that can be applied to any doodle dog breed you are interested in.

In this article, we will be talking about the F1b Goldendoodle. What is it? How is it bred? How does it compare to other generations of doodles?

To start answering these questions, let’s first take a look at what the F1 stands for. This is the initial cross, and it implies the parent breeds are purebred poodle and purebred Golden Retriever.

The F1 generation is an excellent choice for people who are particularly attached to Golden Retrievers but want a Goldendoodle.

Since they are close to their roots, these dogs will definitely have some Golden Retriever traits in both physical appearance and personality.

This generation typically has loose, wavy coats and tends to shed. Still, they shed less than a purebred Golden Retriever but more than some later generations of Goldendoodles, which we will go over below.

What’s the difference between an F2 and an F1? The split is again an even 50/50 between the breeds, so the resulting puppies will be 50% poodle and 50% Golden Retriever.

However, some shedding is still likely to occur, but the F2 generation is actually the hardest to predict.

Some of the puppies might receive two copies of the Golden Retriever coat gene, making them quite heavy shedders.

This generation is a fairly good choice for people who love the personalities of both the poodle and Golden Retriever and want a good mixture of both breeds.

But, people going for this generation should be flexible on coat type and shedding as you never know what you might end up with.

What’s the difference between an F1 and an F1b? The “b” in this generation’s description stands for “back cross.” In more basic terms, the original hybrid cross (F1) has been bred back with a purebred poodle.

The result is a puppy that is 25% Golden Retriever and 75% poodle. These puppies are covered with wavy or curly coats, and they have a reduced shedding.

This generation is a great choice for allergy sufferers as well as people who simply want less vacuuming and cleaning around the house.

An important thing to note is that an F1b Goldendoodle doesn’t necessarily mean that the F1 Goldendoodle was bred with a purebred poodle.

Technically, it can also be a description of an F1 Goldendoodle bred with a purebred Golden Retriever.

However, the vast majority of breeders will avoid this back cross of F1, as the resulting dog would have a coat more similar to a Golden Retriever, making it a heavy shedder.

But, still, it is good to know, and you should always verify with your breeder what breed and generation each of the puppy’s parents are.

Why do breeders breed the F1b Goldendoodle? As we mentioned above, breeders will almost always create the F1b Goldendoodle by breeding an F1 Goldendoodle with a purebred poodle.

This way, the resulting dog has a non-shedding and hypoallergenic coat. Besides that, the F1b generation of Goldendoodles also has some health benefits of ‘hybrid vigor,’ although not as much as the F1 Goldendoodle.

In other words, they tend to be healthier and stronger than their purebred parents.

Thus, the hypoallergenic nature and their curly coats make F1b Goldendoodles one of the best choices for owners with moderate allergies.

To better understand why breeders opt for this generation of Goldendoodles, let’s dive deeper into the differences between F1 and F1b Goldendoodles.

The genetics of Goldendoodles varies from generation to generation. Let’s see some of the main differences of each generation.

The genetic makeup of this generation is 50% poodle and the other 50% from Golden Retriever.

The F1 mini Goldendoodle is relatively easy to breed since all you need is a miniature poodle and a smaller size Golden Retriever.

This generation’s genetic makeup consists of only 25% Golden Retriever genes and 75% poodle genes and has numerous benefits.

It originates from the mix between an F1 Goldendoodle and a standard poodle.

Due to the 50% Golden Retriever and 50% poodle genetics, it is pretty hard to predict how much they will shed and how their coats will look.

Typically, you can expect either a straight, curly, or wavy coat with a moderate amount of shedding.

The first Goldendoodle breed is the F1 standard size, and it comes from a Golden Retriever parent and a poodle parent.

The typical mature weight for this generation is 50 to 70 pounds.

Because of the 75% poodle in its gene pool, this generation of Goldendoodles has a lot more curls, and they are tighter, similar to those found on a standard poodle.

As far as predicting the weight goes, it is much more straightforward.

Generally, the coat color of standard Goldendoodles can be black, copper, gray, white, golden, red, or apricot, with golden being the most common.

In many cases, a white color can be seen on a Goldendoodle’s feathering, and the color of their coat tends to lighten as they age.

One of the things that make the F1 Goldendoodle a healthy breed is a trait called hybrid vigor, which we briefly mentioned earlier.

This simply means that a hybrid dog will be more robust and healthier overall than its purebred parent dogs.

This is because the inbreeding of purebred dogs allows each successive generation to suffer the same genetic defects as their ancestors. 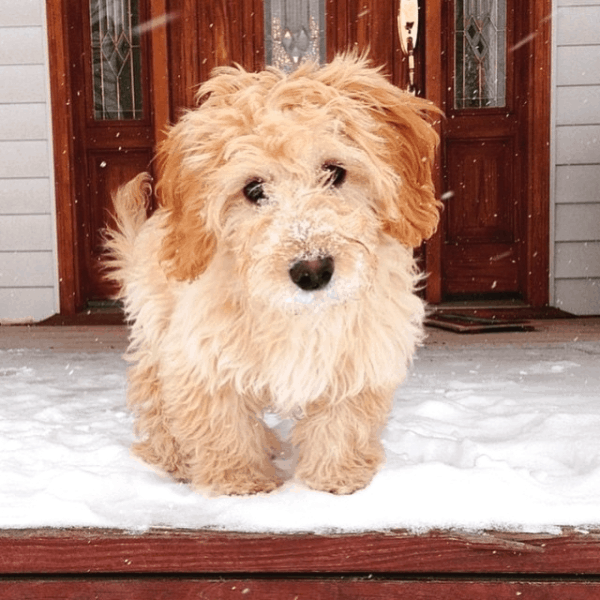 Being a crossbred dog, the F1 Goldendoodle is excluded from this, and it will only inherit disorders commonly found in both parents (the poodle and Golden Retriever).

Similarly, the F1b Goldendoodle also has a hybrid vigor trait, but it is not as strong as in the F1 generation.

This is because the F1b Goldendoodle is a second-generation crossbreed, and they inherit less of the hybrid vigor trait.

To further clarify, there is a simple rule that goes like this: “The hybrid vigor trait decreases with each successive Goldendoodle generation.”

With the F1 Goldendoodle, you never know what type of shedder you might get. Some of these dogs shed a little, while others don’t shed at all.

To further complicate things, you can’t know for sure how much they will shed until they get their adult coat. This can happen between 12 and 18 months of age.

On the contrary, an F1b Goldendoodle is a typical non-shedding dog. If by any chance, these dogs do shed, it will happen on rare occasions due to other possible factors.

Differences in the hypoallergenic levels

This generation is suitable for people with low to mild allergies. They are not recommended for people with more severe cases as they are a 50/50 mix and often shed like their parent – the Golden Retriever.

The F1b generation, on the other hand, has a higher success rate at being hypoallergenic compared to the first generation of Goldendoodles.

They have a 75/25 ratio of genetic makeup in favor of the other parent – the poodle.

This ensures a low shedding rate and makes them ideal for people with moderate to severe allergies.

Goldendoodles, typically, should not shed, so they require minimal grooming at regular intervals.

However, the amount of shedding and type of coat can make a difference in the ease of grooming between the F1 and F1b generation of Goldendoodles.

Since the F1 Goldendoodle can shed more, depending on the type you end up with, its coat will require more grooming than the average dog.

However, even though the F1b Goldendoodle is a low shedder, they require significant grooming.

This is because these Goldendoodles come with curly coats. To avoid matting and tangling of the fur, be prepared for a considerable amount of grooming.

Additionally, the second generation crossbreed’s hair needs to be cut every two to three months.

The price and expenses of both of these generations vary because of the different traits and temperaments found in each dog.

If this seems expensive, you might be surprised to hear that they are cheaper as they are easier to breed than other generations of Goldendoodles.

The F1b Goldendoodles are more expensive, and sales start from $2,500 as they have a non-shedding coat and hypoallergenic features. Also, the grooming costs of this generation are slightly higher due to their curly coats.

Whichever generation you opt for, additional expenses such as a dog house, dog harness, collar, toys, etc., are to be expected.

Furthermore, you will spend money on food, training, grooming, medications, and other essentials a dog might need.

What are other types of Goldendoodle? This is a mix between an F1b Goldendoodle and an original purebred 100% poodle, resulting in 87.5% poodle and 12.5% Golden Retriever.

The F1bb Goldendoodle is the most hypoallergenic of all first-generation Goldendoodles, and it sheds the least.

This is because it has an abundance of poodle genes.

But, as a third-generation of Goldendoodles, the F1bb has much fewer hybrid vigor benefits than the F1b or F1 Goldendoodle.

This will result in dogs that are 25/75 in favor of the poodle. Since the F2b Goldendoodle is the third generation of this mix, they are often referred to as multigenerational.

Multigenerational or multi-gen are terms used to describe every Goldendoodle generation beyond the second one (F2bb, F2b, and F1bb).

This produces a generation that has 18.75% Golden Retriever and 81.25% poodle genetic makeup.

Due to the high prevalence of poodle genetics, they have the highest non-shedding and hypoallergenic traits of all second-generation Goldendoodles.

This is another third-generation of Goldendoodles, which means they are also multi-gen. They come from a mix between two F1b Goldendoodles.

However, you can also make an F3 Goldendoodle by breeding two different F2 Goldendoodles.

They are excellent for owners who suffer from pet allergies as their genetics mostly come from poodle parents.

We hope that some of the confusion you might have had is long gone, and you can finally enjoy getting a new puppy of this splendid mix.

The F1b Goldendoodle gets the best of both the Golden Retriever and poodle breed, making it perfect for any family or individual. The Mini Goldendoodle - Everything We Know About This Amazing Mix

[…] means that the second generation or F1b Goldendoodles have a slender and smaller appearance with a shorter and loose curly coat. In addition, their […]

Are Bernedoodles Hypoallergenic? Are They Safe For Allergy Sufferers?

[…] dog breeds like the Goldendoodle, the Labradoodle, the Cockapoo, and the Bernedoodle are all Poodle mixes that have this quality to […]

[…] terms of personality, temperament, and other traits, they are pretty much the same as any other Goldendoodle out there, but their coat is extremely […]

[…] few multigenerational crosses. In other words, rarely two Goldendoodles get crossed to create an f1b Goldendoodle or even a […]

At Pupvine, we believe every dog deserves a forever home, and every owner deserves a good boi. This is where we step in! From early puppyhood to the complex adult stages, here’s where you’ll find all the info you need to raise your Fido or Fiona the best way possible. Pupvine is more than the average dog-related website. It’s a life philosophy that teaches us dogs are more valuable than we could ever think of. Our furry best friends need more than they deserve for all the love they’re giving unconditionally. We at Pupvine strive to make it easier for YOU, so you can make your dog’s like just PAW-fect!