The Aussiedoodle (or as they were first called when they appeared in the USA, the Australian Poodle) is a hybrid dog breed. Smart, loyal, and eager to please, today, the Aussiedoodle is one of the most popular Poodle mixes in the States. These attributes also make them a top choice for families with children.

The blue merle pattern is one of the Aussiedoodle’s most popular patterns, and today, we are going to find out more about this beautiful canine.

What is an Aussiedoodle? 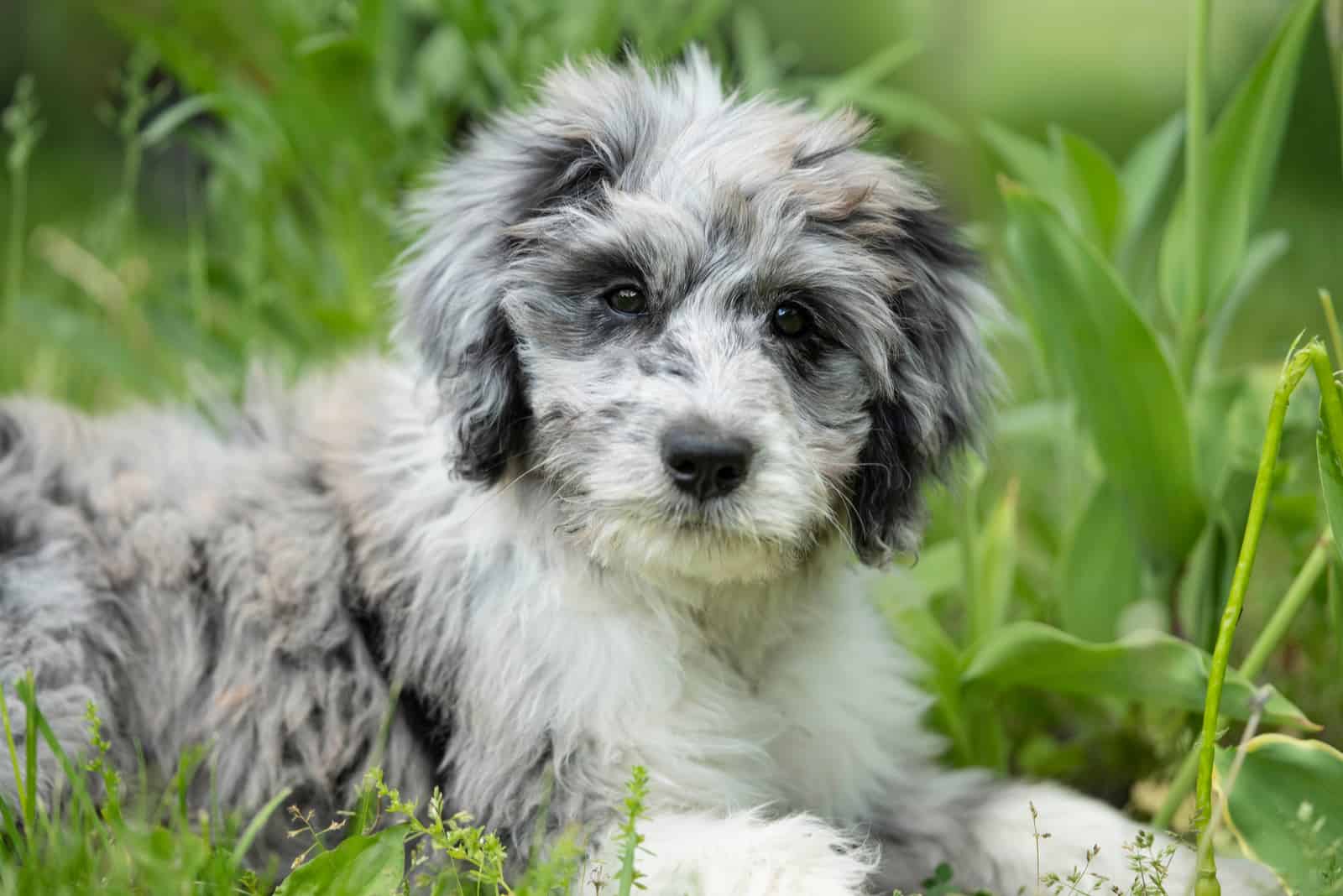 While you might come to the wrong conclusion, thanks to the breed’s name, the Australian Shepherd originated in the United States. After its ancestors came to the USA, farmers bred this medium-sized canine to herd cattle. The AS, like most herding breeds, is a smart, loyal, and high-energy canine.

There isn’t a decisive stance on the origin of the Standard Poodle. However, most experts now agree that the breed originated in Germany and was further developed by French breeders. Despite their looks and how they are perceived today, they are one of the oldest hunting breeds. They were specially trained for hunting and retrieving ducks. The fact that they are intelligent and hard workers makes them easily trainable.

As you can see, and according to the AKC, both of these breeds are very people-oriented and highly intelligent, even though one of them is in the herding category and the other is in the non-sporting category. After reading some information about the parent breeds, you can probably guess what to expect from the Standard Aussiedoodle. Thanks to its parents, this mixed breed is an exceptional companion with strong working genes that is highly trainable. 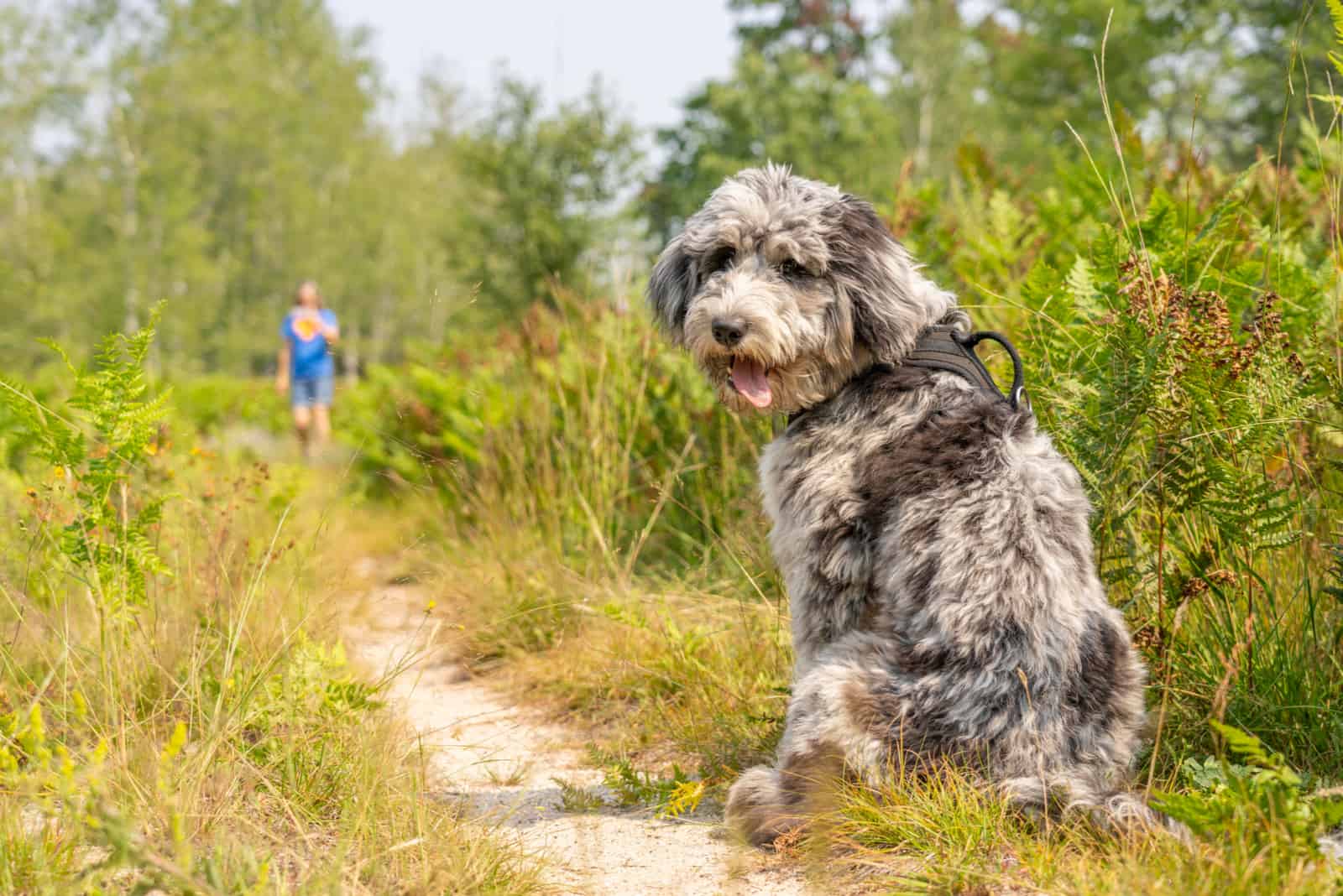 When we said the blue merle Doodle was the people’s choice, we meant it. Thanks to the beautiful color patterns of the Australian Shepherd parent, they are high in demand. A blue merle Aussiedoodle’s coat is a palette of white, gray, and blue with shades of tan. These colors are in intermittent spots all over their coat.

Aside from having an impact on the base color of the coat, the merle gene also alters eye, nose, and paw pad color. For that reason, blue merle Aussiedoodles often have blue eyes. Pink and black are the standard colors when it comes to nose and paw pads.

The interesting thing is that there is some science behind the beautiful looks of the Aussiedoodle. Scientists have proven that the merle gene not only impacts the color pattern but also the look of the muzzle and the eyebrows.

What is a phantom blue merle Aussiedoodle?

Because the merle is not a completely dominant gene, if two merles are mated, one out every four offspring will be a “double merle.” This Doodle puppy is called a phantom blue merle Aussiedoodle. 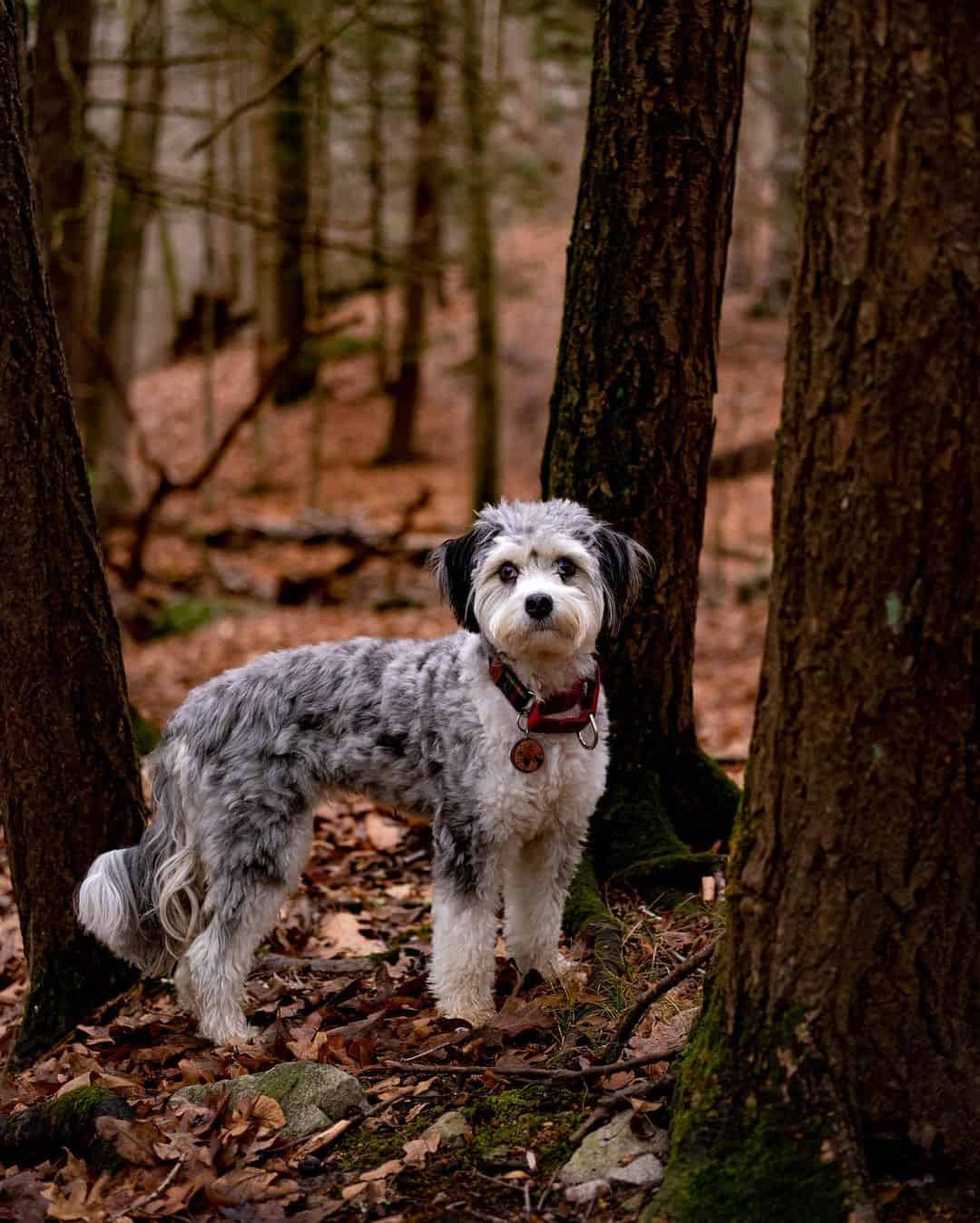 Thanks to the merle from the Australian Shepherd and the numerous solid colors from the Poodle, there are a myriad of different colors. However, there are twelve main colors in which all the individual color patterns are sorted. We’ve already mentioned blue merle, so here are the rest:

Red merle is the second most popular Aussiedoodle coat pattern. These canines usually have a red (brown) base with a few white and tan-colored spots.

A black and chocolate Aussiedoodle can have solid coloring as well as a mixture of both. Shade combinations are usually represented as well.

Doodles with two or three colors on their coats are known as bi-colored and tri-colored. While they have the coat of the Australian Shepherd, they are missing the merle pattern. The most common combinations are black, brown, and red. These are paired with white and tan, with the white is mostly represented on the head or paws.

This combination of colors, while it may be one of the most beautiful, is also one of the hardest to find. Red tri-color Aussiedoodles have a red base on their coats and white markings on their heads and bodies.

The phantom Aussiedoodle has a black, brown, or red base color with markings all around its body. These markings can mostly be found on the muzzle, chest, neck, legs, paws, stomach, and around the eyes.

The black phantom Aussiedoodle has markings around the eyes, on the chest, legs, and stomach. These markings are usually tan-colored.

The red phantom is a contrast to the black phantom coloring, and instead of the black base, they have a red base with tanned highlights around the face, chest, and legs. Also, their paws and chest can have white markings.

Apart from the black base, a black tuxedo Aussiedoodle will have patches of white around the neck and chest.

A red tuxedo Aussiedoodles will have a red base color with markings around the neck and chest.

Teddy-colored Aussiedoodles have a black base with a white and/or tan-colored collar, similar to a teddy bear.

Sable Aussiedoodles have black-tipped hairs. Tan, gray, silver, or beige is the color of the rest of the hair length. 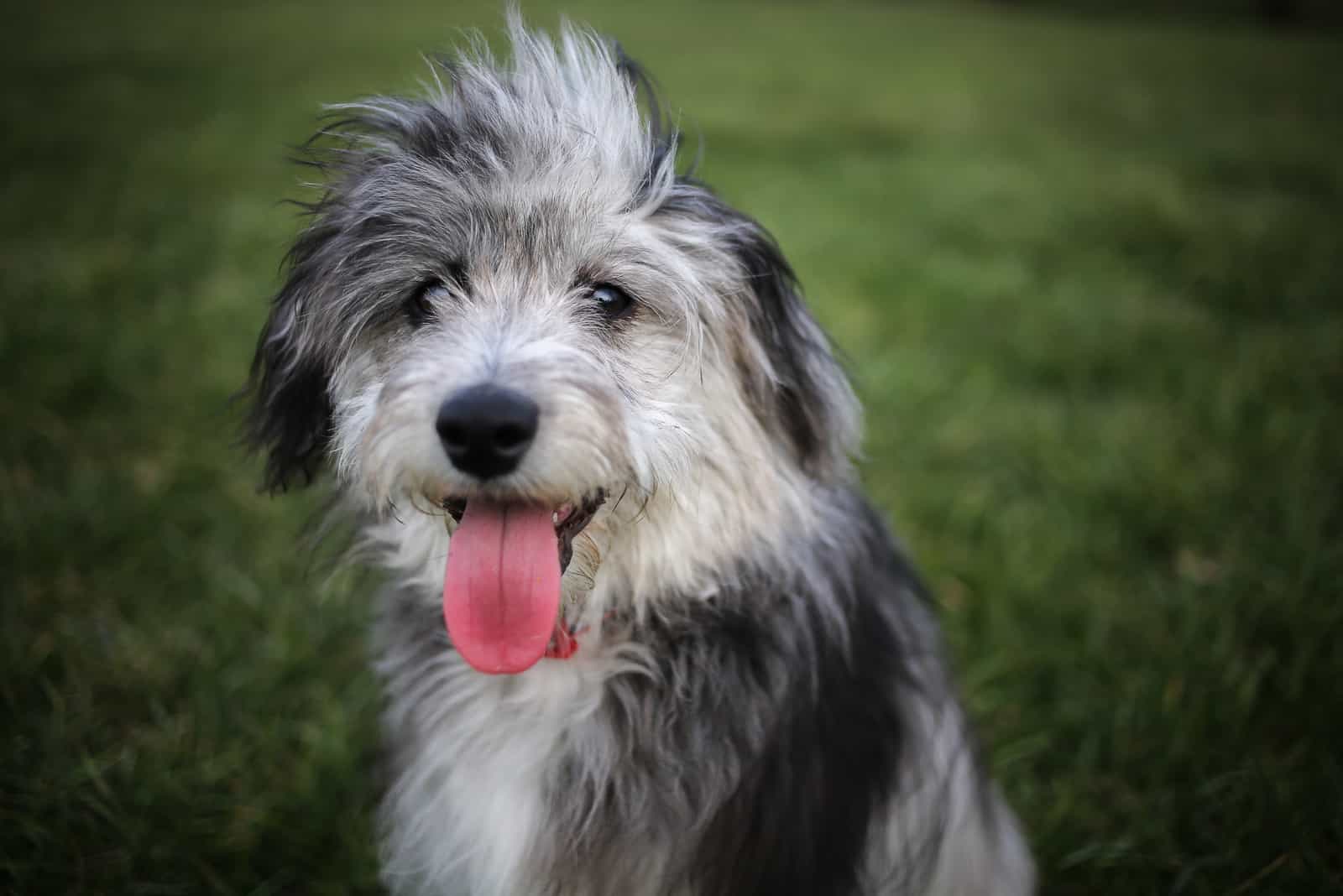 Like with most crossbreds, the appearance of the blue merle Aussiedoodle is unpredictable. The looks of each individual puppy can be different. So, it will be a bit of a mystery until your puppy grows up. With this said, they almost always have shaggy fur with floppy ears.

When it comes to size, the height and weight of the Aussiedoodle will depend on the Poodle parent. This means that you can get one of the three options:

• Toy Aussiedoodle – usually under 20 pounds and under 15 inches

• Standard Aussiedoodle – usually around 70 pounds and around 25 inches

As you have already seen, these canines have numerous color and coat variations. This range of attributes comes from the Australian Shepherd’s merle gene and the many solid colors of the Poodle parent. The AS parent can be black, red, blue merle, or red merle, while the Poodle parent can have even more colors: black, blue, brown, cream, red, white, and apricot.

Depending on the genes, there are only two coat variations:

The puppy can also inherit the double coat from the Australian Shepherd parent.

As we mentioned before, the Australian Shepherd’s merle gene also impacts the color of the eyes, which can be:

The Aussiedoodle dogs also usually have round heads with short muzzles and mustaches.

Is an Aussiedoodle a good family dog? 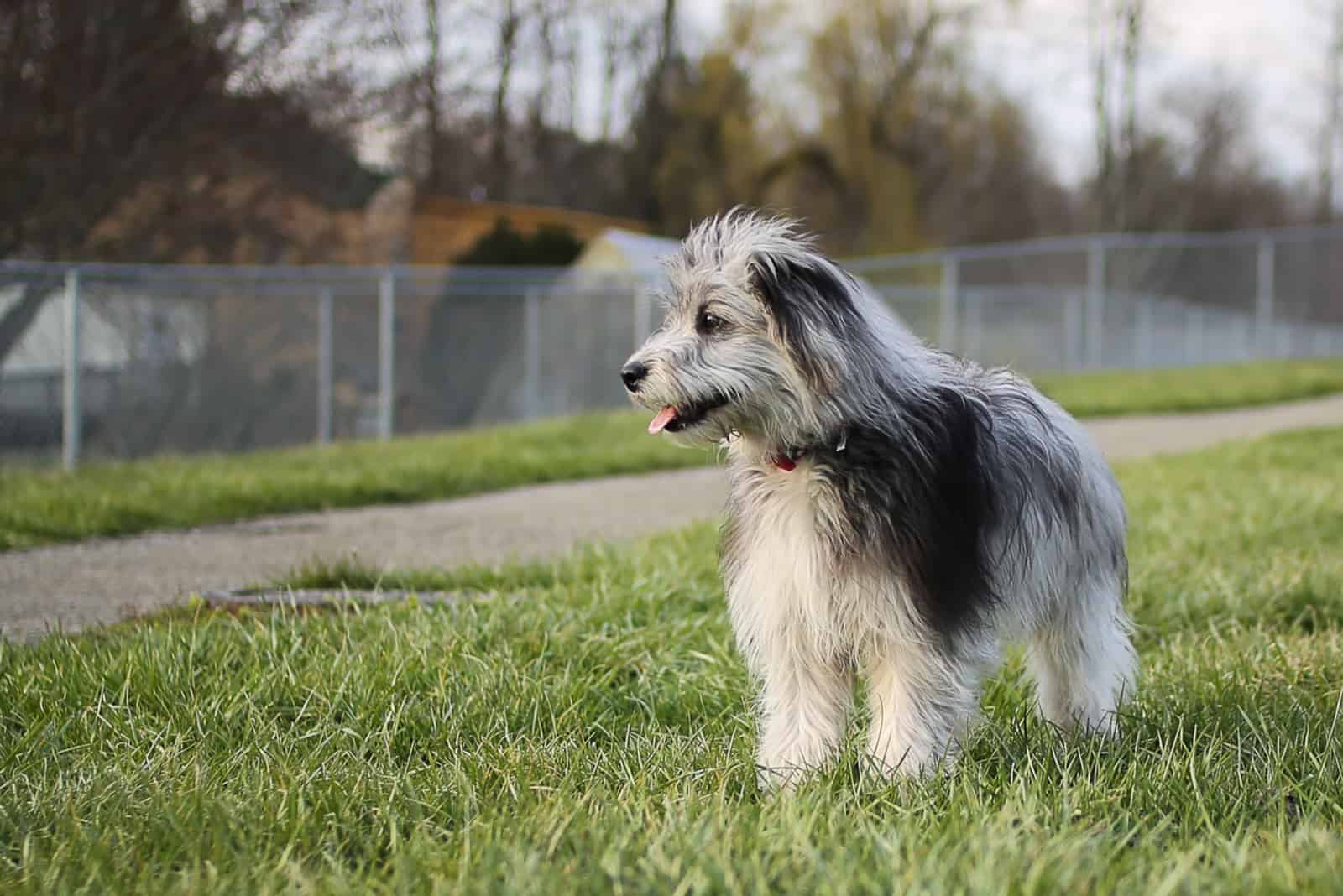 The Aussiedoodle makes for a great family dog. Thanks to the Poodle parent, they are pretty low maintenance when it comes to shedding, and the AS genes make this pooch friendly in nature, so they will love spending time with each of their owners.

With this said, it is also very important to train your dog from an early age so it doesn’t develop herding habits that can cause harm to children. Plenty of attention is also recommended, and a lot of one-on-one training will help challenge your dog mentally.

Is an Aussiedoodle hypoallergenic?

Aside from the beautiful colors and great temperament, the Aussiedoodle can reduce the chances of a pet allergy reaction as they tend to be hypoallergenic. Of course, this trait, like every other, is different from dog to dog.

Where can I find a blue merle Aussiedoodle for sale? 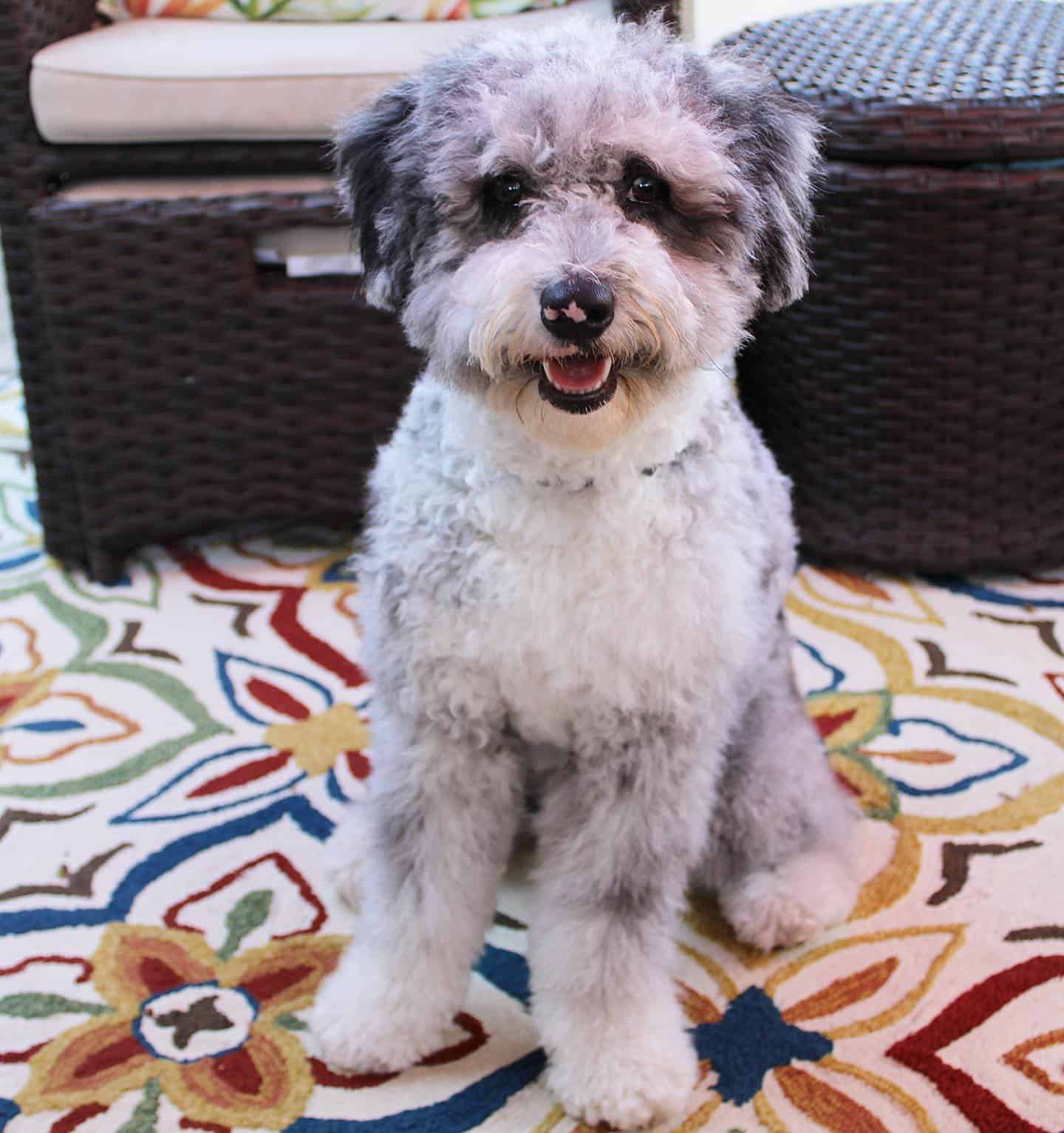 These dogs are very popular, so before you go out and buy one, there is something you should be aware of. Popular mixed breeds like the blue merle Aussiedoodle are often bred in puppy mills. These facilities often aren’t the right environment for dogs, which can impact the puppies’ health, among other things.

To avoid any problems when buying a blue merle Aussidoodle puppy, you should look out for:

• Breeders who have specific puppy wait times on their websites

Aside from this, red flags are no contact information, no video or in-person interviews, etc.

How much do Aussiedoodles cost?

The price of an Aussiedoodle depends on how you acquire it. The cheapest option is to adopt one, but this is a very difficult task, as they are rarely found in shelters. However, even if you find one, the adoption process will cost you between $150 and $500. The other option is to find a reputable breeder. Buying an Aussiedoodle puppy this way will cost you in the range of $1,500 to $4,500. The most expensive specimens are mini and toy sizes with tri-color coats.

Smart, loyal, an exceptional companion with an amazing appearance and great temperament, the blue merle Aussiedoodle is the perfect companion for families. But before you get one, do thorough research on the facilities that sell them.

15 Labradoodle Colors: A Complete Guide To All Shades

[…] the Mini Aussiedoodle’s coat color comes in combinations of black merle, red merle, blue merle, black and tan, and red phantom, which is the rarest […]