The Goldendoodle is one of the most popular dog breeds out there, and for many, their dream dog… one that they have always wanted to bring into their home.

When the time has finally come to do just that, the question remains: which gender of Goldendoodle do I get?

Is there a lot of difference when it comes to male vs female Goldendoodles?

We’re here to answer your questions and help you make this call in a way that will be the best for both your family needs and for the dog itself.

Contents show
1 What are Goldendoodles?
2 The difference in size and looks
3 Grooming
4 Potential medical problems
5 Differences in temperament
6 Male vs female: Training
7 Correcting behavioral issues
8 Where can I get a Goldendoodle? A Goldendoodle is a dog breed that came about by mixing a Golden Retriever and a Poodle. That’s where it gets the name from as well as the traits and the features – a mixture of the two.

In many ways, a Goldendoodle puppy is the perfect mix of the traits of its ancestors. This dog is a loving and intelligent dog that doesn’t shed a lot and is easy to train and care for.

Who wouldn’t want to get their hands on a sweet pooch like this?

The term, F1 Goldendoodle, is used for the first generation of this breed. That means that one parent of such a dog is 100% Labrador and the other is 100 % Poodle.

This is the traditional Goldendoodle… the one that you think of when you’re first introduced to the breed.

F1B Goldendoodle is the name for the crossbreed that is 25 percent Poodle and 75 percent Retriever. It’s a more popular breed since it doesn’t shed as much as the F1 variety.

The F2 Goldendoodle is the second generation, meaning that both parents are F1 Doodles. This type of dog doesn’t cause allergies, which is great news for allergic dog lovers.

The difference in size and looks As is the case with most dog breeds, the males and females of the species look somewhat different in terms of size and overall features.

That’s something to take into account when choosing which one to get, especially if you have a limited amount of space in your home.

There are three main sizes in which these dogs can be found, and the difference when it comes to males vs females exists with all of them.

When it comes to the standard size, the differences are more than obvious. A male Goldendoodle can be up to 40 pounds heavier than a female one.

That is to say, if a smaller dog is what you’re looking for, you can choose a smaller-variety male dog or a standard-variety female dog. When it comes to grooming, there’s no difference between male vs female Goldendoodles.

They both have fairly simple requirements, but those need to be taken care of on a regular basis, so there will be less work and less fussiness for everyone involved.

A dog owner should brush the dog regularly. If brushing is too much of a job for you, it would be wise of you to take them to a groomer every 8 to 12 weeks.

If the dog is rather active and gets dirty a lot, you’ll need to wash it and take care of it’s coat more frequently.

Every dog deserves a nice and shiny coat. They feel fabulous when clean and tidy, just like we humans. Male and female Goldendoodles face similar medical problems for the most part. The most major difference involves reproductive problems, where females will face more serious and challenging issues.

For instance, female dogs can develop uterine and breast cancer, especially as they get older. The best way to deal with this in advance is to spay the dog.

That will also help with their behavior when the dog is in heat and make life easier on both the Goldendoodle and the owner.

Male Goldendoodles can get prostate cancer as they get older, and that can be a life-threatening problem if it’s not treated in time.

Since there are quite a few potential problems out there, it may be best to get pet insurance as soon as you get a new puppy just to be on the safe side. First of all, it’s important to become aware of the differences between temperament and personality.

Temperament is a set of traits that the whole breed has, which may or may not vary when it comes to gender.

Personality, on the other hand, is the behavior of an individual dog, and this is where you may see a range of differences since these dogs are unique and it’s difficult to make generalizations about their behavior.

Accepting that different dogs have different personality traits also helps with handling their training in a productive way.

There’s a common belief that female dogs are more loyal than male dogs. That’s somewhat true, but it also requires further explanation and going into details as to “why”.

That’s why male dogs are often used as guard dogs since they treat the home as their own and react when it’s invaded (or when they perceive it as being invaded).

A female Goldendoodle often serves as a service dog because of its attachment to a person. The ability to train a dog depends on their genetics, which is why purebred dogs are better at performing certain tasks.

Since Goldendoodles are highly intelligent and loving dogs, they are fairly easy to train by using a simple reward system, which is the basis of any dog training.

This is especially true with the F1 variety since the genetic traits of their parents are still the strongest.

The reward system can be related to food, but it doesn’t have to be. Some dogs notice that you’re happy with their behavior and are willing to complete a task just to see you thrilled and to please you. Training also requires the dog owner to correct the behavioral problems that your dog exhibits.

Sometimes it’s as simple as male dog training to mark their territory, and the best way to deal with that is to remove all pet urine from the area.

That way, the dog notices the futility of such an effort, and after a while, they stop.

Male dogs will try to mark their territory, and the easiest way to correct this behavior is to remove all of the urine from the area.

This can be done with baking soda, which removes most odors. When your dog realizes it can’t trace the scent it has left, it’ll stop trying.

A lot of the time, Labradoodles get easily excited, and they jump and hump at merely the sight of you.

This can get annoying over time, and it’s important to correct this sort of behavior quickly, but in a gentle and loving manner. It’s best to reward the correction rather than to punish the behavior. 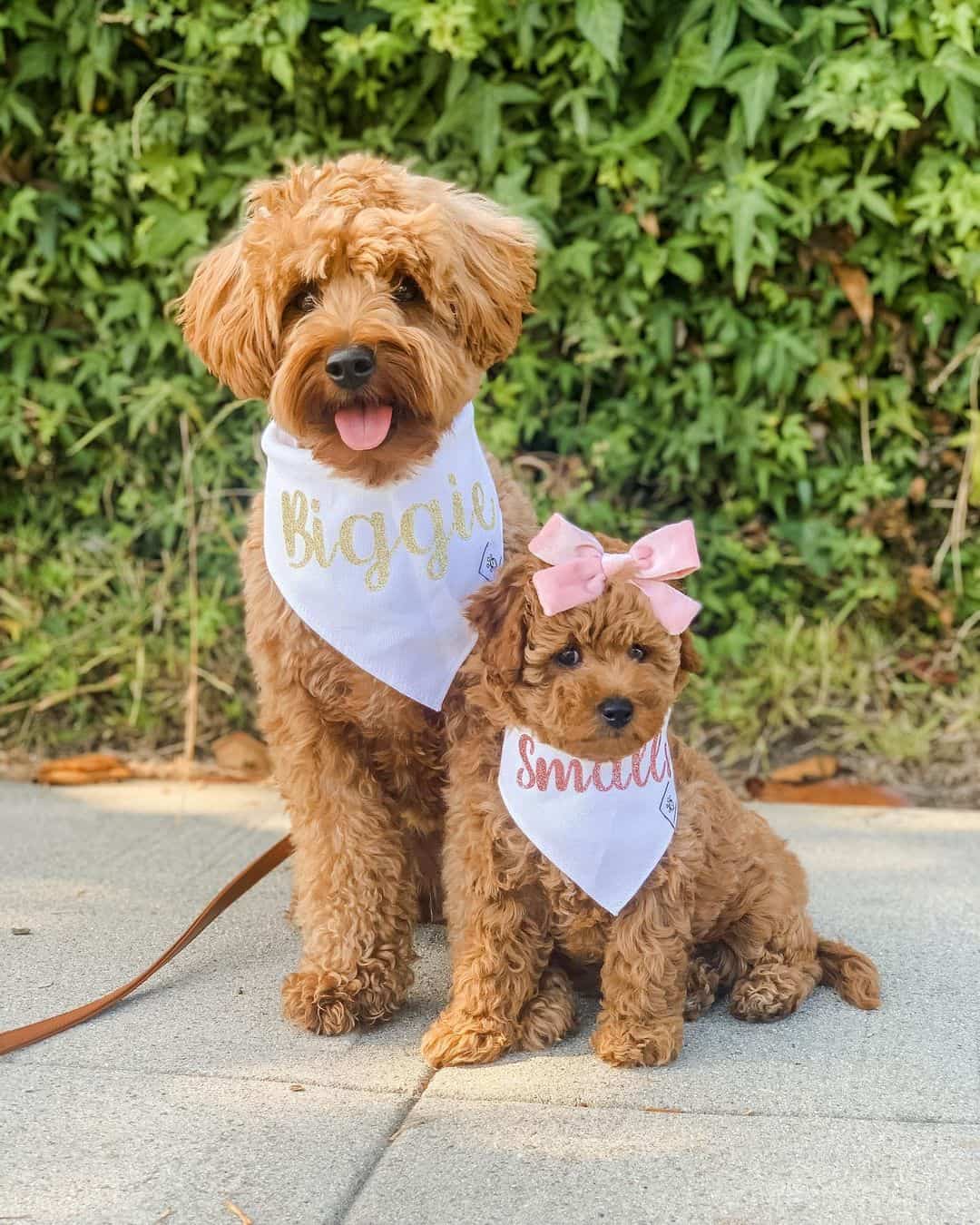 An important gender diction to have in mind is that females will also start acting territorial when they are in heat. They will mark their territory and hump as much as the males.

That can’t be fixed when the dog is in heat, but only by spaying the dog on time.

Both male and female Goldendoodles will go through puberty of sorts when they are sexually maturing, just as humans do.

During this period, they will exhibit more aggressive behavior as well as become more difficult to deal with. Although this will be a difficult period to manage, fear not! The puberty stage will pass.

Where can I get a Goldendoodle? Since a lot of the behavior traits that your Goldendoodle exhibits is about genetics, it’s important to know where you’re getting the dog from.

The same goes for the traits that are a result of upbringing since it helps to know where the dog came from and what it has experienced.

A reputable breeder will be able to help you with this and make sure that your particular type of Goldendoodle matches your needs and potential allergy issues.

There are also places to adopt these dogs, especially after they have ended their careers working as service dogs.

However, as is often the case with shelters, for a family dog that really isn’t important at all, you can’t know what their reputation is or how purebred they are.

In the end… should you get a male or a female Goldendoodle?

There are many differences between male and female dogs, but many similarities as well. This proves to be true for Goldendoodles as much as it is for other breeds.

Keeping this in mind, males are more protective and more aggressive and females have greater behavioral problems related to reproductive cycles.

In the end, when it comes to choosing between male vs female Goldendoodles, it’s a matter of your own personal preference and the circumstances in which your dog will be brought into.

It will still take time, effort, and love to train your dog before it becomes the perfect companion you’ve been dreaming of. 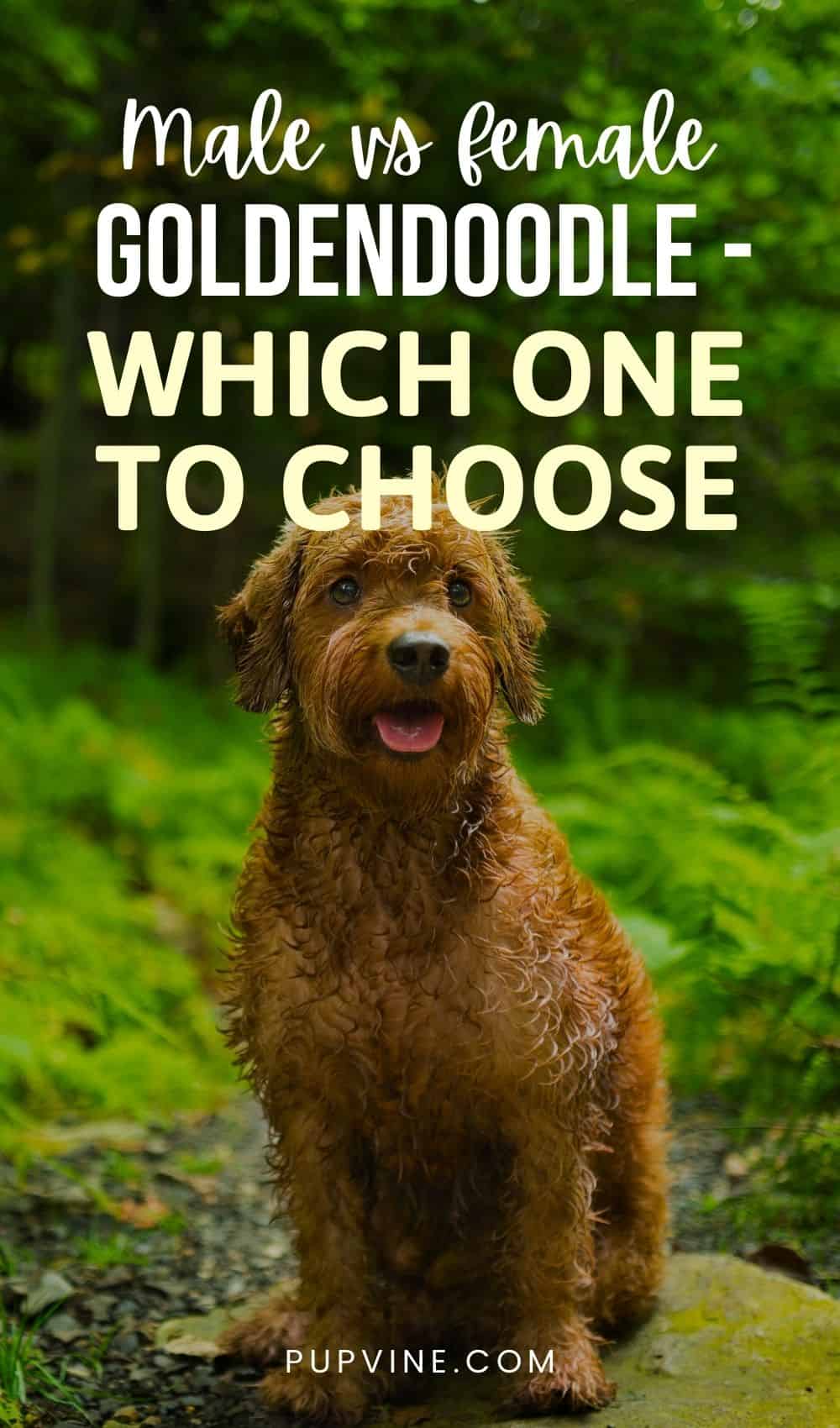 […] things like coat colors, coat types, and even the sex of the dog. If you stipulate that you want a female Goldendoodle of a particular color, then you might have a long […]

The Top 12 Most Reliable Goldendoodle Breeders In Ontario

[…] male and female Goldendoodles are equally cheerful and intelligent, and there is only a very slight difference […]

[…] Goldendoodles have the best of two worlds combined: the Poodle’s intelligence and amazing coat features, and the Golden’s sweet temperament. […]

[…] this, Sherry bred Goldendoodles and researched the possibility of improving the Bernese Mountain Dog’s short lifespan of […]

[…] the Goldendoodle has a nice temperament, both male vs. female. Of course, when the mood strikes, they can get a bit naughty, but all for the sake of fun. With […]