Are you having difficulty deciding which Dogo Argentino’s gender suits you better? Well, that’s certainly a tough question as both male and female Dogo Argentinos have their own qualities.

However, in the long run, you won’t notice much of a difference as both Dogo Argentino puppies share many common values.

There are some slight differences that are unnoticeable by an untrained eye. These differences refer to size, behavior, training, and socialization.

However, it is of huge importance to know that the Dogo Argentino breed is not recommended for inexperienced dog owners as the breed itself is dominant, requires hard work, and can be overly aggressive.

Now, let’s try to break down the theory of ‘‘who wins in the battle of male vs female Dogo Argentino!’’

Dogo Argentino dogs date back to 1928, when a man called Antonio Nores Martinez, from Argentina, crossed the Cordoba fighting dog with other bulldog and mastiff breeds.

The purpose was to design a breed that has the traits of a guardian and a hunting dog at the same time.

This breeder, who was also a doctor, seems to have succeeded as these canines are one of the best big-game hunting dogs in the world. They are athletic, strong, and tall in overall appearance.

The breed shares some common traits with the Cane Corso and the Boxer breed, but ultimately, this canine has its own unique path that distinguishes the breed from any other dog in the world.

Even though the breed can appear as extremely dangerous, this dog doesn’t qualify among the first 29 aggressive dog breeds in the world.

When it comes to size, male and female Dogo Argentinos don’t differ much – both males and females start with 24 inches in height. Males can reach up to 26.5 inches, while females can reach 25.5 inches according to the American Kennel Club.

When it comes to weight, both males and females revolve around 80 to 100 pounds. 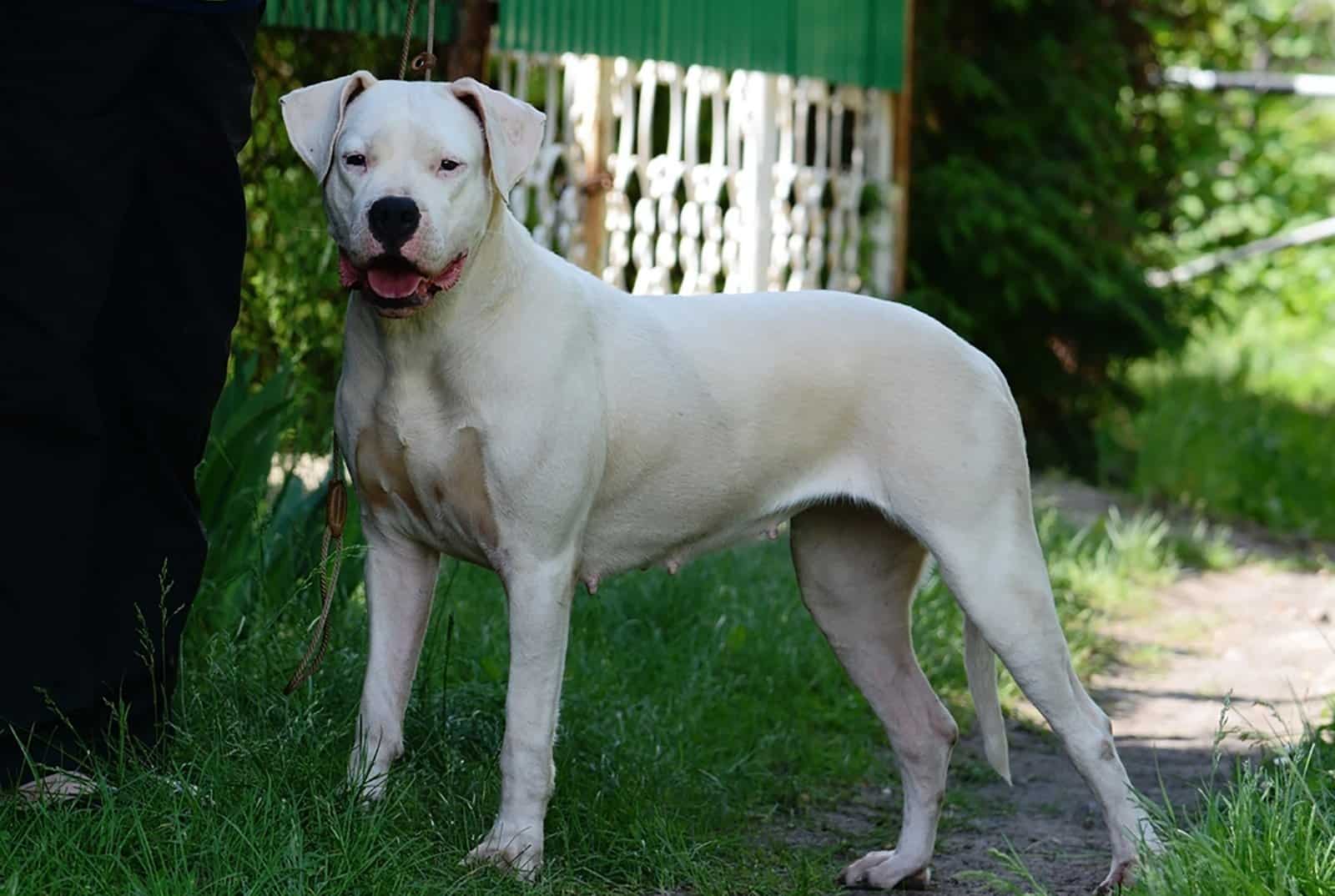 As we can see from the previous paragraph, there are no major differences between male and female Dogo Argentinos in terms of physical appearance.

Both of these canines are practically the same when it comes to coat color, coat type, and size. The AKC breed standard is white coloring, and a short, smooth coat that doesn’t shed frequently.

This is a quite favorable breed among Dogo Argentino breeders as this puppy doesn’t require high maintenance in terms of grooming.

However, there might be slight changes when it comes to size and musculature.

Male dogs generally appear bigger according to some unwritten rule. However, when it comes to Dogo Argentino puppies, or, popularly known as Argentine Dogo, males are only a few inches taller than females.

Males can reach up to 26.5 inches according to the AKC. However, the difference is negligible, especially to an untrained eye.

These canines are magnificently big, and it is not rare that the breed is crossed with the Cane Corso.

The Cane Corso Dogo Argentino Mix is quite popular, especially due to the fact that these canines share a lot of common values.

Generally, male Dogo Argentinos have more muscles and tend to show aggression more often. Their weight varies with respect to their feeding habits and training routine.

However, female Dogo Argentinos are usually slightly lighter than males, which means that a one-hundred pound heavy female dogo is a pretty long shot.

The Dogo Argentino price can vary based on size and gender, though.

Female Dogo Argentino puppies have negligibly lighter features in terms of musculature with respect to male puppies. A males’ chest is thicker, and its head is slightly bigger, too. 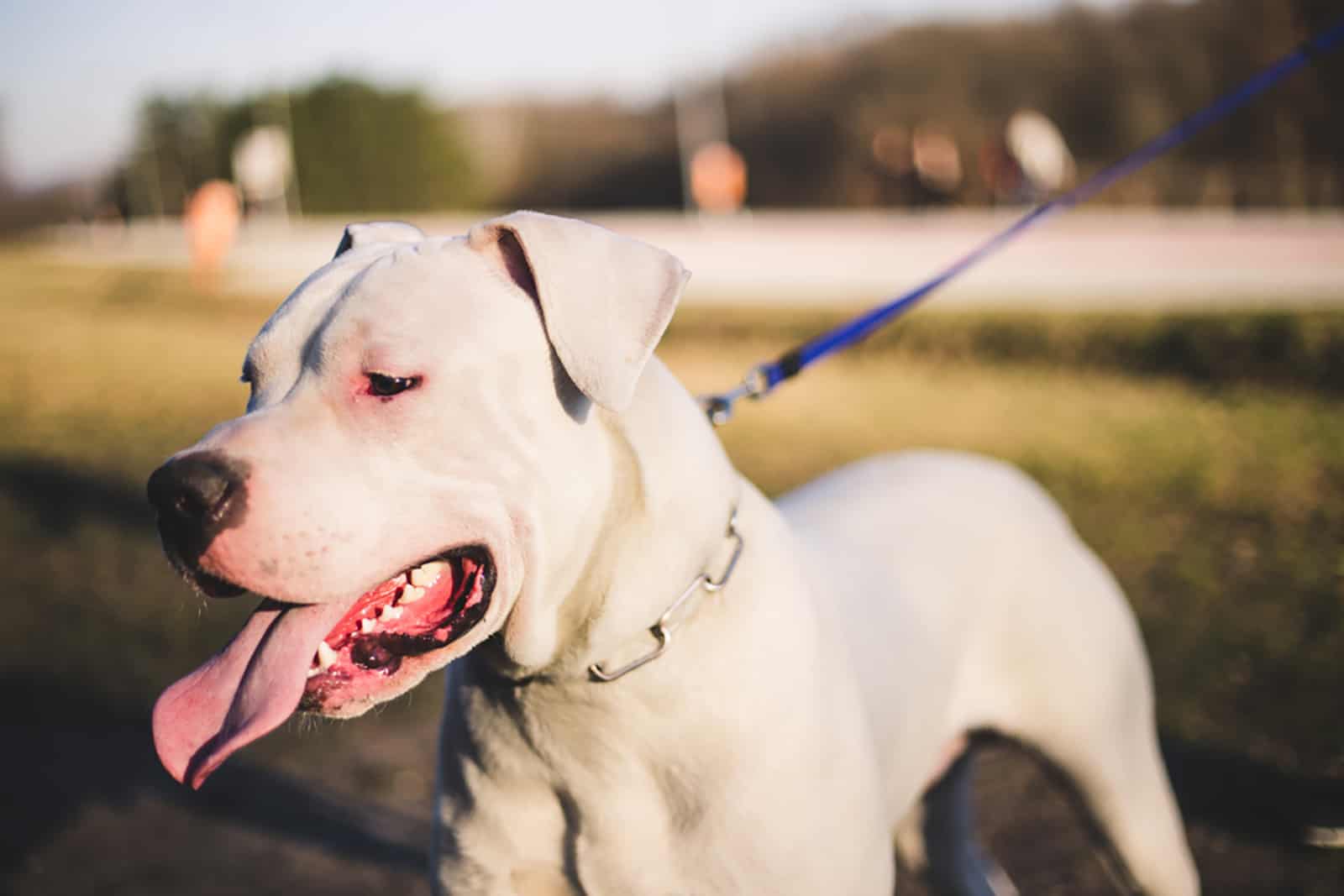 Male puppies are generally well-behaved, but they require early socialization and obedience training. This is due to the fact that Dogo Argentinos belong to aggressive dog breeds, and their overall nature is vigilant.

Untrained males can be destructive, especially towards strangers and smaller pets, such as cats and hamsters. They require long hours of work, but in the long run, this effort pays off.

These canines can be excellent service dogs and search and rescue dogs. They are engaged in military and police work, too!

These canines have a tendency to bark both when happy or when on alert. They have a strong bark, which scares away potential predators.

Male Dogo Argentino puppies are loyal, good with families, and make excellent human companions. However, they are not recommended for first-time owners as they require strong leadership and a firm touch!

In order to fully understand what a Dogo Argentino dog is, you need to have a little bit more experience than regular dog owners.

Female puppies are also excellent guard dogs, and they display a similar temperament as male dogs.

However, female Dogo Argentinos can generally be more reserved, shy, and independent.

The Dogo Argentino breed doesn’t stand long hours of solitude as these canines are very dependent and become self-destructive once they are separated from their owner.

However, females are slightly more independent, and they can endure solitude more than their male counterparts.

However, these differences are not always the rule, and it is not rare to see both males and females behave similarly in this regard.

They have an excellent sense of smell, which is helpful during the hunt. Even though this is not the tallest dog breed in the world, their giant size helps them during the hunt as they can easily deal with wild animals, such as pumas and wild boars.

Dogo owners won’t make a mistake if they choose either a male or a female Dogo Argentino.

Are Male Or Female Dogo Argentino Prone To Socialization? 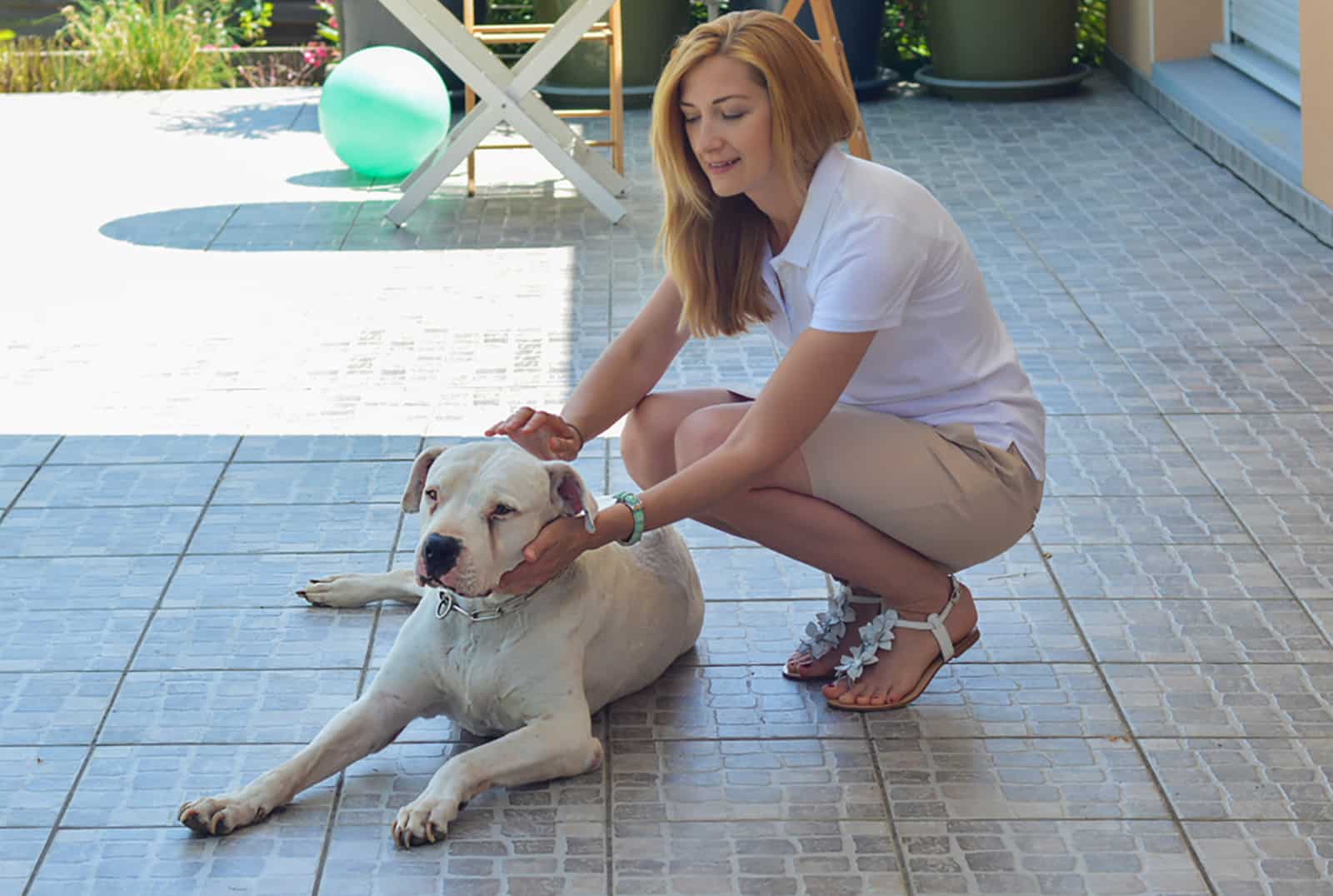 Despite the fact that this is an intimidating dog breed, Dogo Argentino puppies, both males and females, reach a high level of socialization once they are properly trained.

Their socialization requires lots of time, and the best time to start the socialization training is during the early puppyhood stage. These purebred canines are not the easiest dogs to potty train, and that’s why early training is a must.

This is an intelligent dog breed that performs tasks easily, but it is not rare that dogs display stubbornness, especially if the owner doesn’t stand ground as the leader of the pack.

If you’re planning to adopt a Dogo Argentino puppy from a breeder or a rescue group, make sure that the canine goes through early obedience training, too.

Disobedient canines display aggressiveness, which is pretty hard to control. Family members will have a hard time dealing with both male and female disobedient Dogo Argentinos, and that’s why the implementation of early training is crucial.

This large breed, however, is loyal and won’t hurt you. They tend to act as guardians around humans, which means they don’t come across as friendly towards strangers. Socialization is needed in order to maintain a good relationship with other pets, too! 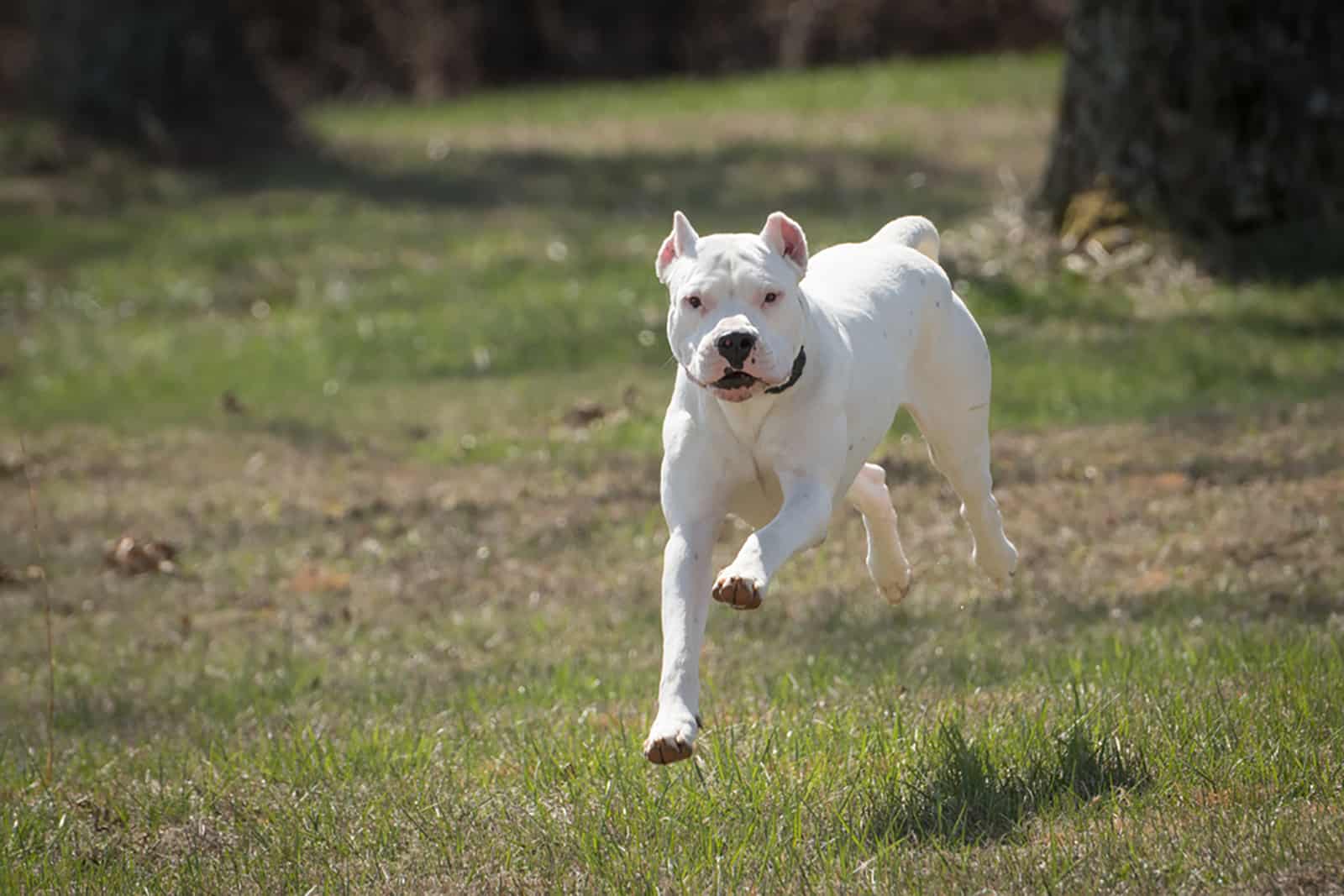 In the battle between male vs female Dogo Argentino puppies, there is no clear winner or loser. The exact same situation applies to training.

Male canines are intelligent, and they perfect tasks easily. These dogs have a high level of energy, and they require a walk two to three times during a day.

These dogs love engaging in various dog games such as hide and seek, frisbee fetching, and retrieving a ball.

Dog training collars and other training supplements can add to the overall performance of these puppies.

Female puppies are also easy to train, but they require a strong leader in their owner, just like Pit Bulls. Female puppies differ from male puppies in the way that they have more mood swings during a year. This is due to their heat period.

Spaying is highly recommended as a female dog’s behavior changes after spaying in a positive way. These canines become calmer, and therefore, their training process gets easier.

Other than that, these large breed dogs enjoy similar activities as males do. Their high-level energy requires long hours of outdoor activities.

Creative dog games, such as dog puzzles or hide and seek can be a great way to mentally stimulate your puppy! 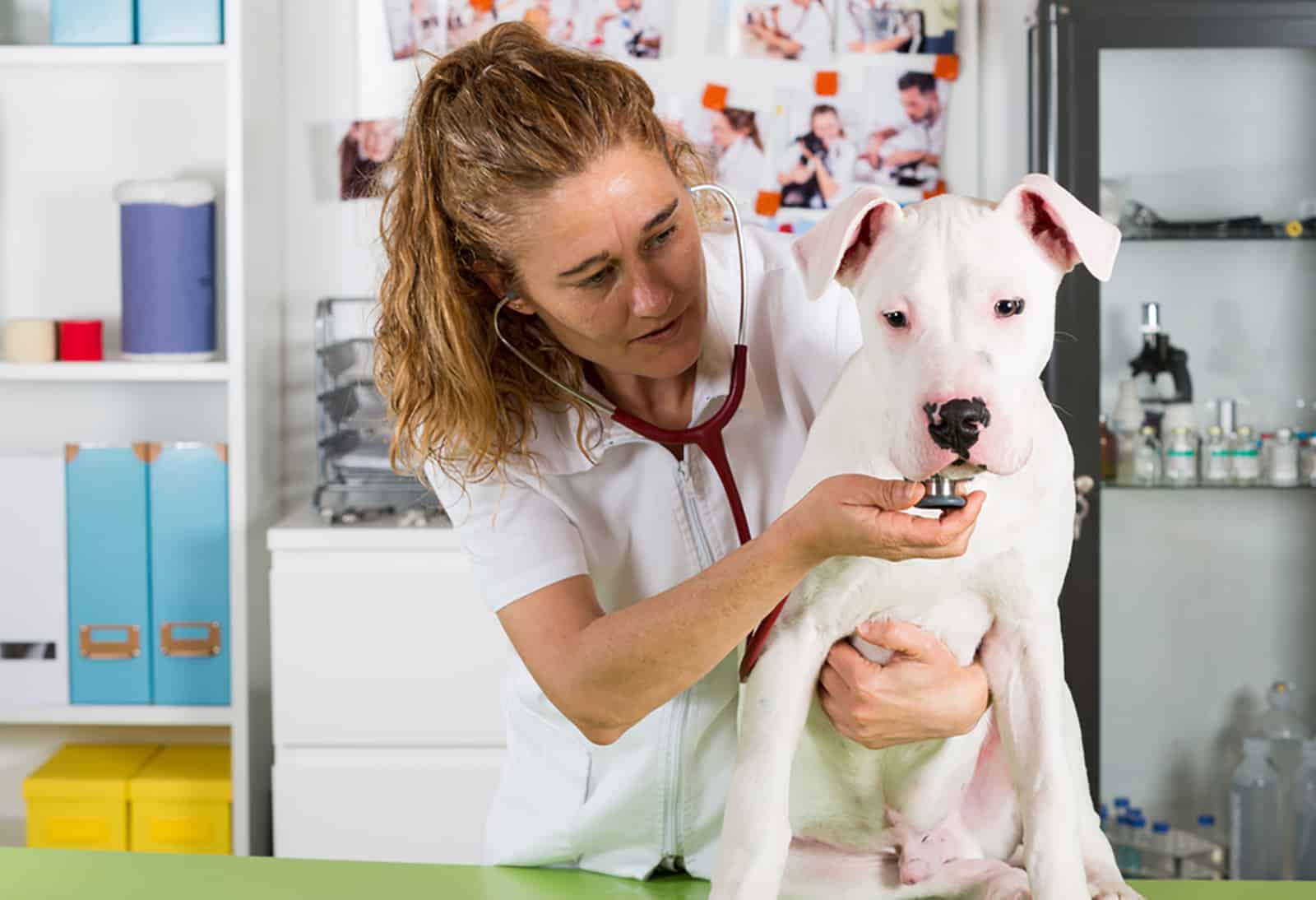 Dogo Argentino puppies are generally healthy, but they can face some health issues that are common for this breed. Here, we are mostly talking about hip dysplasia and cardiac disease.

However, it is not that rare that these puppies develop deafness, too!

This issue is common for large breeds, and it also affects Dogo Argentinos! Hip dysplasia in dogs represents a hip joint malfunction, which disables large dogs from performing regular activities, such as running and jumping.

This health issue is treated surgically most of the time. Overwhelming training activities are not recommended if your puppy suffers from hip dysplasia as the condition can be worsened or lead to other injuries.

This condition is common for both male and female Dogo Argentino puppies.

Cardiac disease in dogs is pretty common for Dogo Argentinos and Bull Terriers, too. Reputable breeders will most likely provide all documentation related to your puppy, and regularly test this breed for possible cardiac diseases.

However, regular vet checks are recommended for future owners, too! Other than that, you need to create a strongly organized training routine for your puppy, and make sure that the dog doesn’t miss the training during the day.

Regular training and proper dieting are two things of crucial importance, and they prevent the possibility of your dog developing a type of cardiac disease.

What Are The Benefits Of Dogo Argentino? 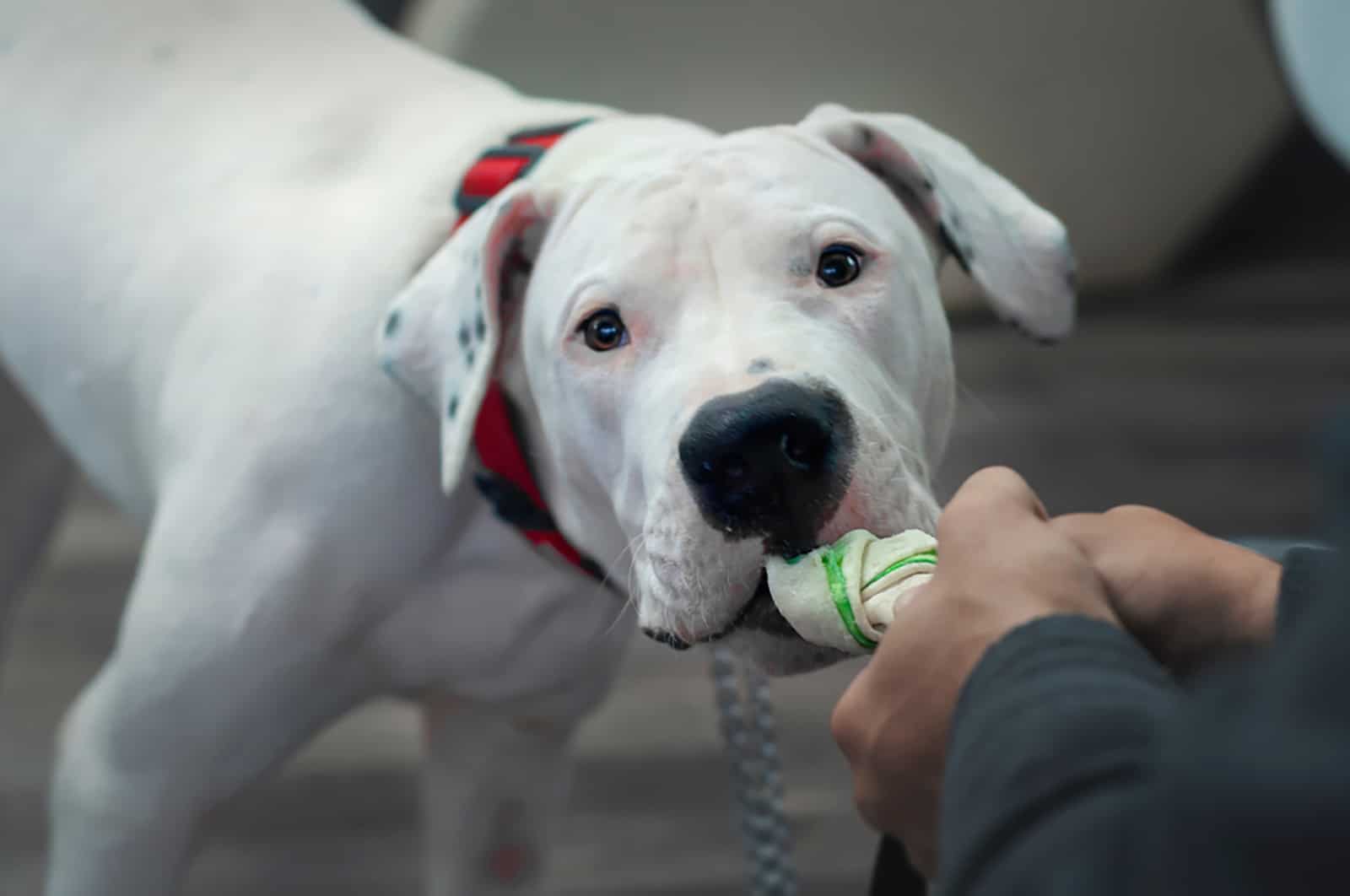 Dogo Argentino dogs are extremely loyal and good dogs to have as life companions. They are natural watchdogs, ready to protect you at all times.

However, both male and female Dogo Argentinos require early socialization and obedience in order to display stable, calm behavior.

If you’re a hunting enthusiast, then this is the perfect dog for you. Dogo Argentino puppies are excellent hunters, service dogs, and working dogs, and you will often see them perform as police and military service dogs, too!

They have a short, smooth coat of white coloring, which gives them a unique look! Their muscular physique makes them look magnificent and intimidating to both predators and wild animals.

Generally, both male and female Dogo Argentino puppies are good to have in your household, especially if you want a dog that will protect you at all times.

However, this breed is not recommended for first-time dog owners as they require strong leadership.

This is a healthy dog, but the establishment of a quality training routine is crucial.

When it comes to dog food, you can take a look at the Pitbulls’ raw diet as some sort of guidance, but these canines generally need quality food with the proper amount of protein.

The battle of male vs female Dogo Argentino puppies is never-ending. There is not a clear winner or loser as both of these puppies share a lot of common values, and the difference is negligible.

They differ slightly in size as males are taller by an inch or two, give or take. In terms of behavior, both male and female puppies share similar qualities.

Females, at times, tend to be more reserved or shy, but this is relative, and it doesn’t have to be the rule.

Conclusively, both males and females are favorable for having as pets as they make excellent watchdogs, guardians, and service dogs. However, this breed requires strong leadership as these puppies can display aggressive behavior at times.

This is definitely not a dog breed for inexperienced owners.

Read more: 19 Dogs That Look Like Dobermans – Exposition Of Power And Beauty

Dogo Argentino Growth Chart: How Big Do These Giants Get?