There’s a popular belief amongst dog owners that there’s a difference between a family dog, a show dog, and a dog that’s trained for hunting.

There are reasons why these are thought of as different types of animals, but there’s one dog breed that shows that such distinctions are rather blurry.

There was a time when, for a Dogo Argentino, hunting was the only job in town. That’s no longer the case since these beautiful dogs are still very much sought after, but not always for hunting purposes.

Contents show
1 What’s a Dogo Argentino?
2 What do they look like?
3 Nutrition
4 Health problems
5 Grooming and exercise
6 Hunting
7 How to train for a hunt
8 The Dogo Argentino as a non-hunting dog
9 Kids and other pets
10 Summing things up The origins of this breed could be traced to a particular time and a particular person that was responsible for creating and cultivating this dog.

The Dogo Argentino was bred by Dr. Antonio Nores Martinez, a doctor from Cordoba, Argentina.

It was done by crossbreeding several species of local purebred dogs with fighting dogs common in the area.

The initial goal was to create a breed that would be used for fighting, but Dr. Martinez was a hunter himself, and that’s where the new breed was shown to be very effective.

Soon, the Dogo Argentino was used for big game hunting across Argentina, and later, across the world. As is the case with most hunting dogs, the Dogo Argentino has a powerful and elegant look to them.

Their body is rather harmonious, and through careful breeding, it was made to be perfectly suited to powerful bursts of energy needed for a hunt.

A Dogo Argentino has a muscular build, a powerful nose, and great lung capacity.

It always has an expression of alertness and hardness as if it’s ready to obey a command. After proper training, they will be able to do just that. It’s also easily identifiable by a short and white coat. This is a carefully bred dog and their nutritional needs reflect that fact. They change throughout their lives, and as an owner, you should be aware of that fact.

Most dog food companies provide a premade mix based on the size of the breed and the age of the dog.

A Dogo Argentino is considered to be a large dog, and that’s how they should be fed. It’s also important to consult a veterinarian about the diet and any other problems that may arise over time.

Clean fresh water needs to be provided for the dog at all times. There are a few health problems that a Dogo Argentino is predisposed to. As much as ten percent of these dogs experience deafness.

It is known as pigment-related deafness, and it happens to other white dogs such as Dalmatians.

There are other common conditions to be aware of. For instance, their bodies are designed for speed and explosive movement, which is necessary for hunting, but this can also lead to hip dysplasia problems.

For the most part, a Dogo Argentino that’s treated with care and with the guidance of a vet can lead a long and healthy life. Their average life expectancy is about 15 years. The same goes for making sure that the dog’s ears are kept clean and that their strong nails are trimmed on a regular basis.

Other than that, it’s just a matter of taking a bath now and then, which is also a great opportunity for the dog and the new owner to bond.

Exercise, however, is another matter since a Dogo Argentino is a hunting dog by nature, and it will require a few daily walks or, at least, one rather long one.

It has a lot of built-up energy, along with a strong sense of smell that will assist with finding prey. Therefore, a Dogo Argentino is not a dog for a novice owner or an owner who can’t put in the time for this work. The Dogo Argentino was meant to be the fighting dog of Cordoba, but it soon became obvious that it was made for hunting. It was first used as a big-game hunting dog since those are the animals that are most commonly sought after by an Argentinian hunter.

For instance, wild boar, puma, and peccaries are commonly found on the vast prairie of Argentina, and the Dogo Argentino is used to the long walks needed to track these animals down as well as enduring difficult weather on the road. Thus, it will require lots of exercise after it’s retired.

It’s important to note that there are two main types of hunting dogs to be taken on a trip with you. These are known as catch dogs and bay dogs. Bay dogs are used to locate game and alert you to it while catch dogs do what their name suggests: they catch the game and keep it down with their weight and teeth.

How to train for a hunt The first step towards training a Dogo Argentino for hunting is to make sure that they have their basics covered. These include simple commands, such as sit, stay, down, come, off, leave, and heel.

Once the dog has a firm grasp of these commands, you can take them on a hunting trip with you.

That’s the best way for them to generate a prey drive that will work together with training and help you with your hunting goals.

The practice itself depends on what you are hunting for. For instance, wild boar and pigs are the most common large prey in the United States.

It’s best to help the dog learn about the scent of the animal they are looking for by exposing them to a domestic pig that is somewhat similar.

The only way for them to learn is to try again when they fail and to be rewarded when they succeed.

When it comes to hunting for large game and a dog that you can’t train in a domestic environment, it’s important to use a pack of dogs and allow them to work together.

Bears are such a game since you can’t keep them domesticated and allow the Dogo to get used to them.

It’s best to use a cloth or other scented item to keep the dogs interested in the scent and follow the trail along the path where the bear might hide.

This process should be repeated until the pack is ready. Keep in mind that a Dogo Argentino has a hunting instinct that will kick in along with the training after a while.

The Dogo Argentino as a non-hunting dog There are many families that buy or adopt Dogo Argentinos without any plan to use them as a hunting dog but as a family pet. That’s perfectly fine since it’s a loyal dog and one that’s used to being around people, but it presents a set of challenges of its own.

The American Kennel Club (AKC) classifies Dogo Argentinos as what is known as working group dogs. Those are dogs that are used to performing practical tasks and helping their owners with work.

Those dogs include breeds such as the Spanish Mastiff, the Boxer, the Pitbull, the Bull Terrier, the Irish Wolfhound Bulldog, and the Great Dane.

They can be used as sheepdogs, guard dogs, or hunting companions.

Those are intelligent animals and they are used to dealing with regular and repetitive tasks. When such dogs are adopted, they usually have a lifetime of training and experience behind them, and a sudden change of pace may be disturbing to them.

A Dogo Argentino, in particular, is an intelligent breed of dog, and when they are used to a routine, they will seek it.

This means that such dogs aren’t a good choice for novice dog owners and for those who are not used to working and training with dogs themselves.

Still, it’s a work in progress, and a family that’s willing to put in the effort could find a great pet by adopting this dog even if they don’t hunt.

Kids and other pets

A Dogo Argentino is used to people and to large parties that usually need to organize hunting trips. The same goes for kids.

Dogs will be as loyal and affectionate with them as they will be with adults. For older dogs who are a bit set in their ways, it may take a while until they are accustomed to new faces.

That’s something to keep in mind when you’re having guests.

Since this dog breed has strong hunting instincts, they are always on the lookout for prey. That is why they usually won’t get along with other smaller dogs and may even be aggressive with them.

This isn’t the case if other dogs are brought up with a Dogo Argentino. But, to be on the safe side, you shouldn’t get one if you already have a long-time family pet of a smaller variety. 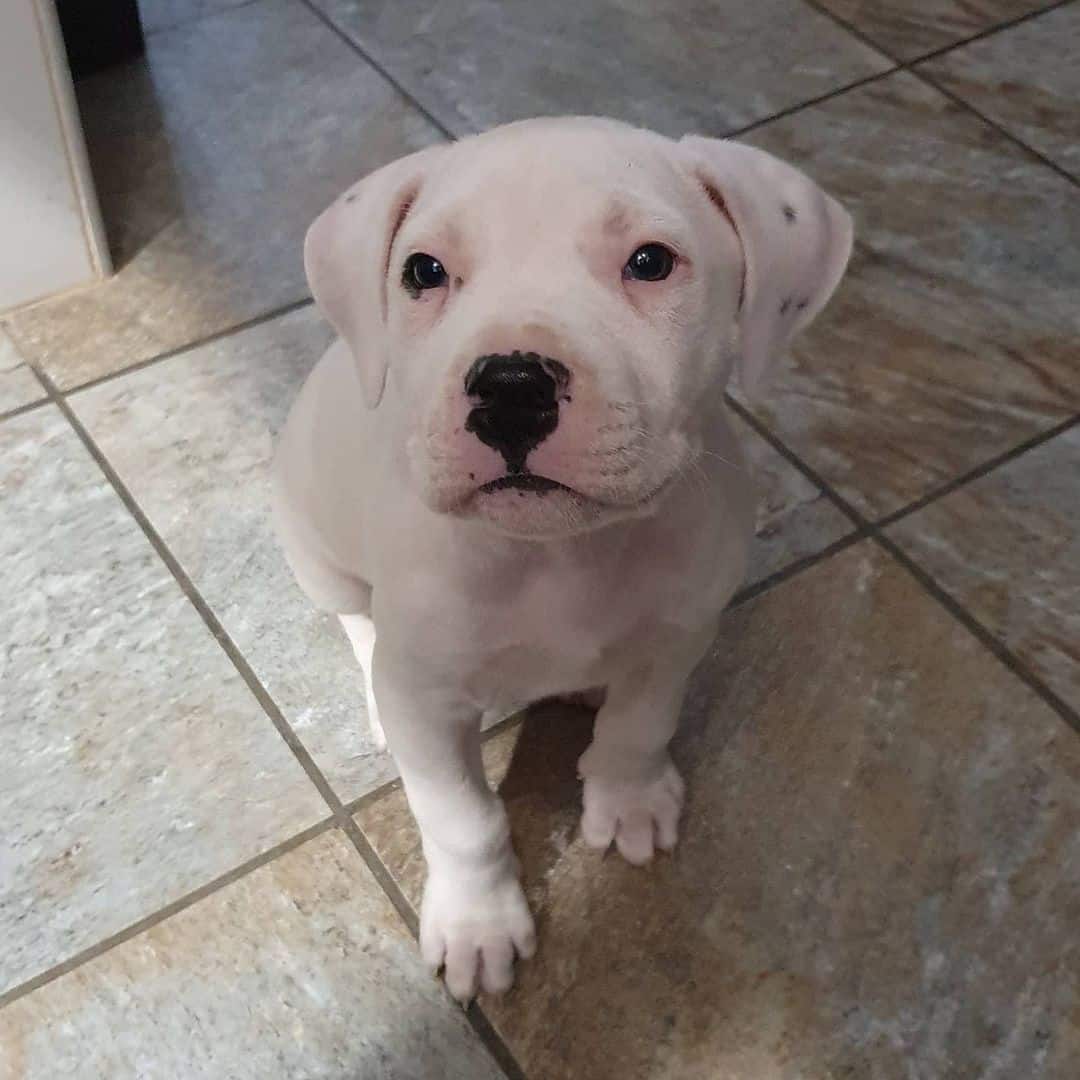 A Dogo Argentino’s hunting abilities are exceptional, and that’s what makes them such a beautiful animal to look at and train.

They will be absolute champions since this is what they are bred to do. Also, it’s possible to adopt them and keep them as pets as long as you’re ready to put in the work needed to keep them active.

Hunting dogs require a lot of exercise and quite a lot of food since they are usually big dogs, and that’s the case with the Dogo Argentino.

They require little grooming compared to other domestic dogs, and most of your time together will be spent playing and taking walks.

Read Next:
• Aksaray Malaklisi Dog Breed Facts: Meet Amazing Guardian Dog
• What Is A Hanging Tree Dog And Should You Get One Yourself? 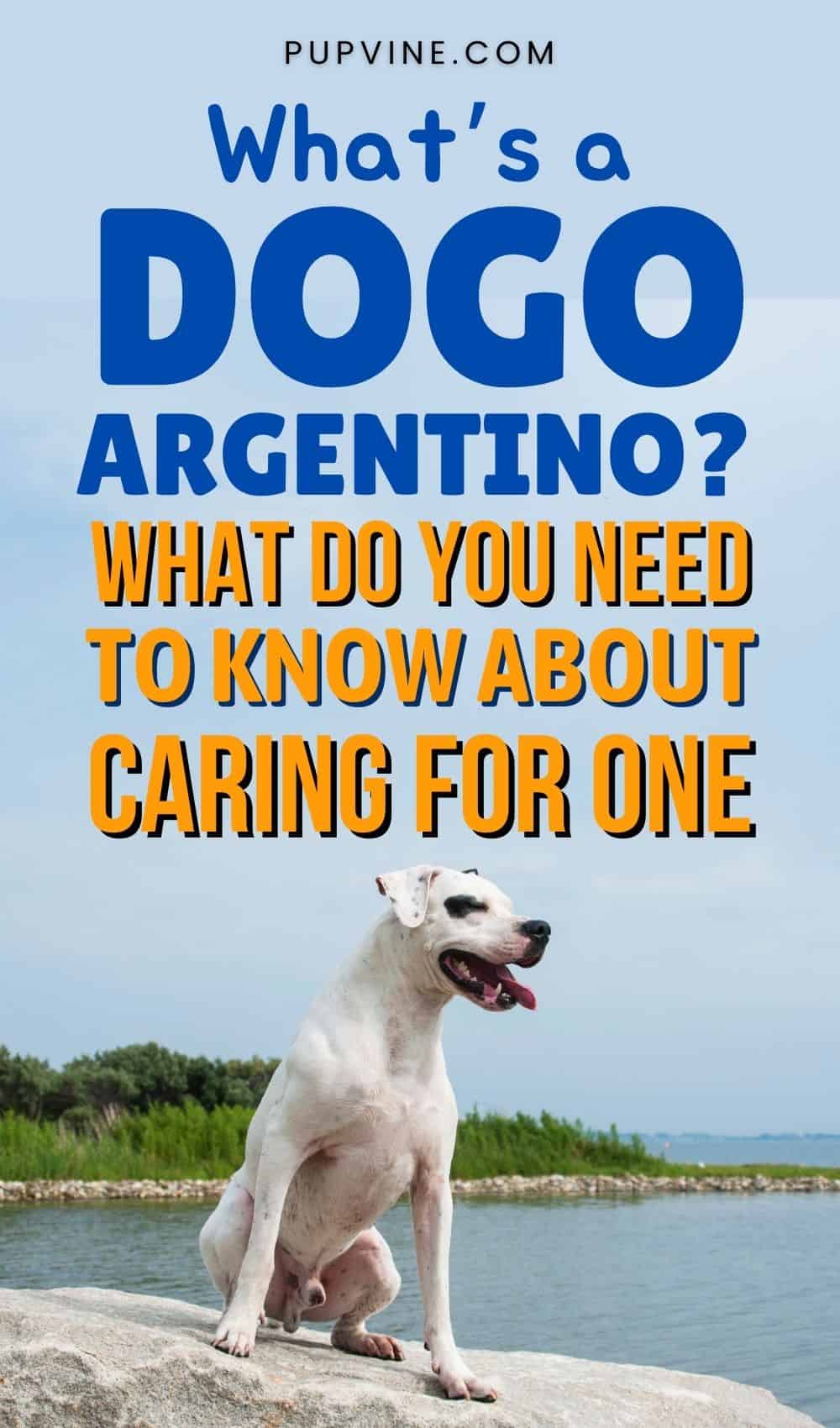 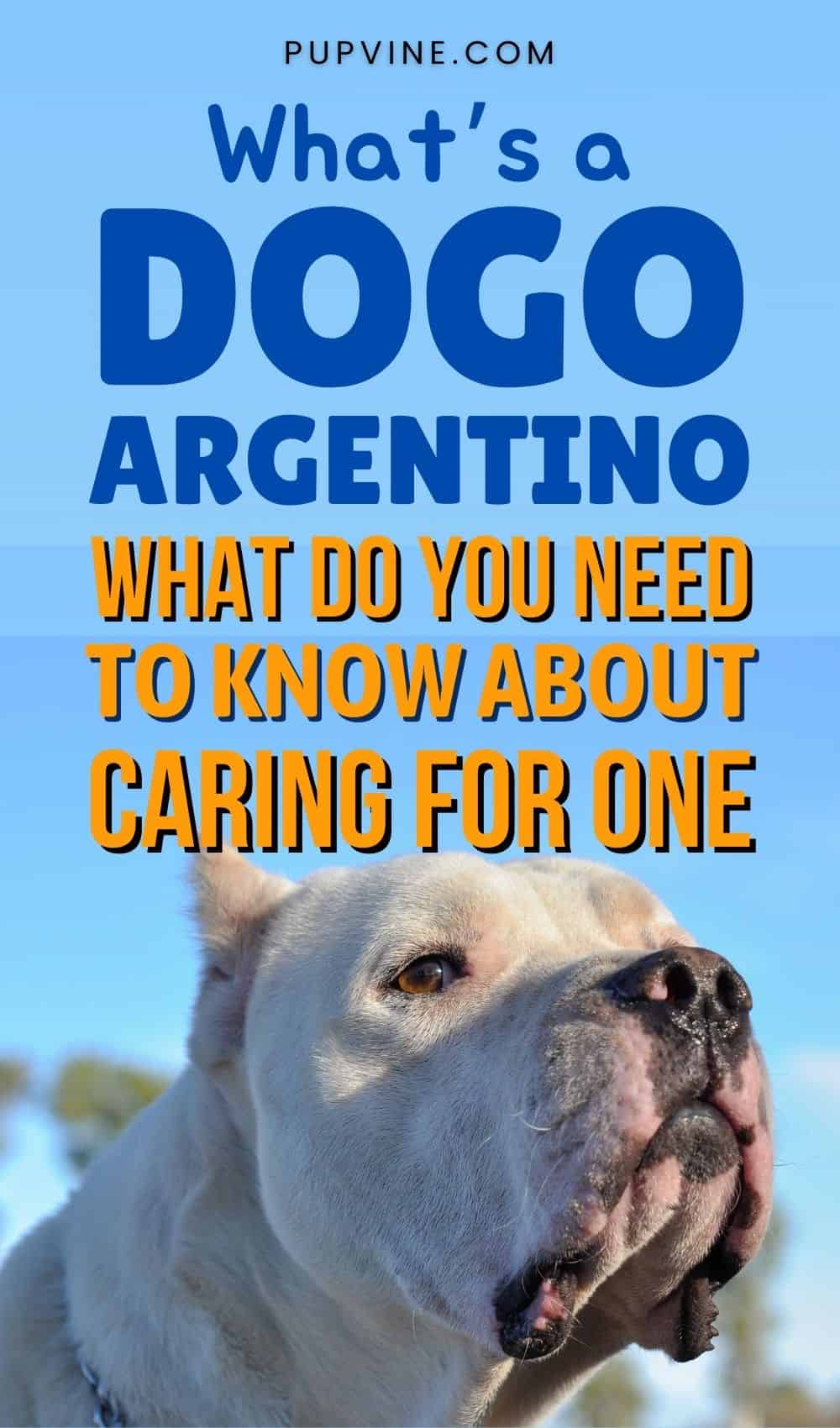 […] Dogo Argentino is a mighty dog, and the Dogo Argentino price is even mightier. Dogo Argentinos, otherwise known as Argentine Mastiffs, are quite versatile dogs. First bred in 1928 by the Argentinian doctor, Antonio Nores Martinez, these dogs present as large and muscular chaser dogs. […]

Male Vs Female Dogo Argentino: Which One To Choose?

[…] order to fully understand what a Dogo Argentino dog is, you need to have a little bit more experience than regular dog […]

Dogo Argentino Vs. Cane Corso – Who Would Win?

[…] what about Dogo Argentino vs. Cane Corso? These two breeds seem to make everyone turn around for another look when they walk […]

The Ultimate Guide To The Dogo Argentino Pitbull Mix

[…] Argentino Pitbull Mix, sometimes referred to as Dogo Pitbull or Dogo Pit, is a crossbreed between a Dogo Argentino and a Pitbull. The Pitbull variant that is most commonly used for producing this mixed breed is the […]