What is the first thing you think of when someone says ‘Great Pyrenees colors’? What colors are we talking about? There is just white and a few marks if you are lucky.

Yes, you are probably right. But, before we dive into the whiteness of his double coat, let’s learn a little bit more interesting information on this Mastiff-like breed with a high energy level and a sound mind.

Where does this dog come from? The first time I saw this magnificent dog breed was actually in the place of his origin with rough climates . One year, I decided to have an adventure with my Labrador Retriever and walk after the footsteps of Saint Jacob – a Camino de Santiago .

Our journey started in France, and for the next 500 miles, I had to walk over the Pyrenees mountains to the place called Santiago de Compostela, which is located in Spain . That is something similar to what our guard dog had to do.

That is where I saw a huge dog that, at first, I thought was a polar bear. But, hey… it is impossible to find polar bears in Southern Europe. It was actually a Great Pyrenees guarding his flock of sheep.

The Great Pyrenees is also called the Pyrenean Mountain dog , after the mountain range he was living a quiet life in until the Middle ages. Then, some French people recognized his beauty, and suddenly everybody on the French court wanted one.

Great Pyrenees puppies became a must-have accessory of the noble people, and he even got the title of the Royal Dog of France . He has another name that sounds very fancy – it is ‘ Chien des Pyrenees’ . But, how did he get to the Pyrenees?

It was also a great journey that the Great Pyrenees had to walk in order to get to his mountains. His first origins can be tracked down to Central Asia or even Siberia. Now, we know that he is cousins with the Hungarian Kuvasz and the Maremmano-Abruzzese . That is probably why he is so big and white.

The Great Pyrenees Colors And Markings 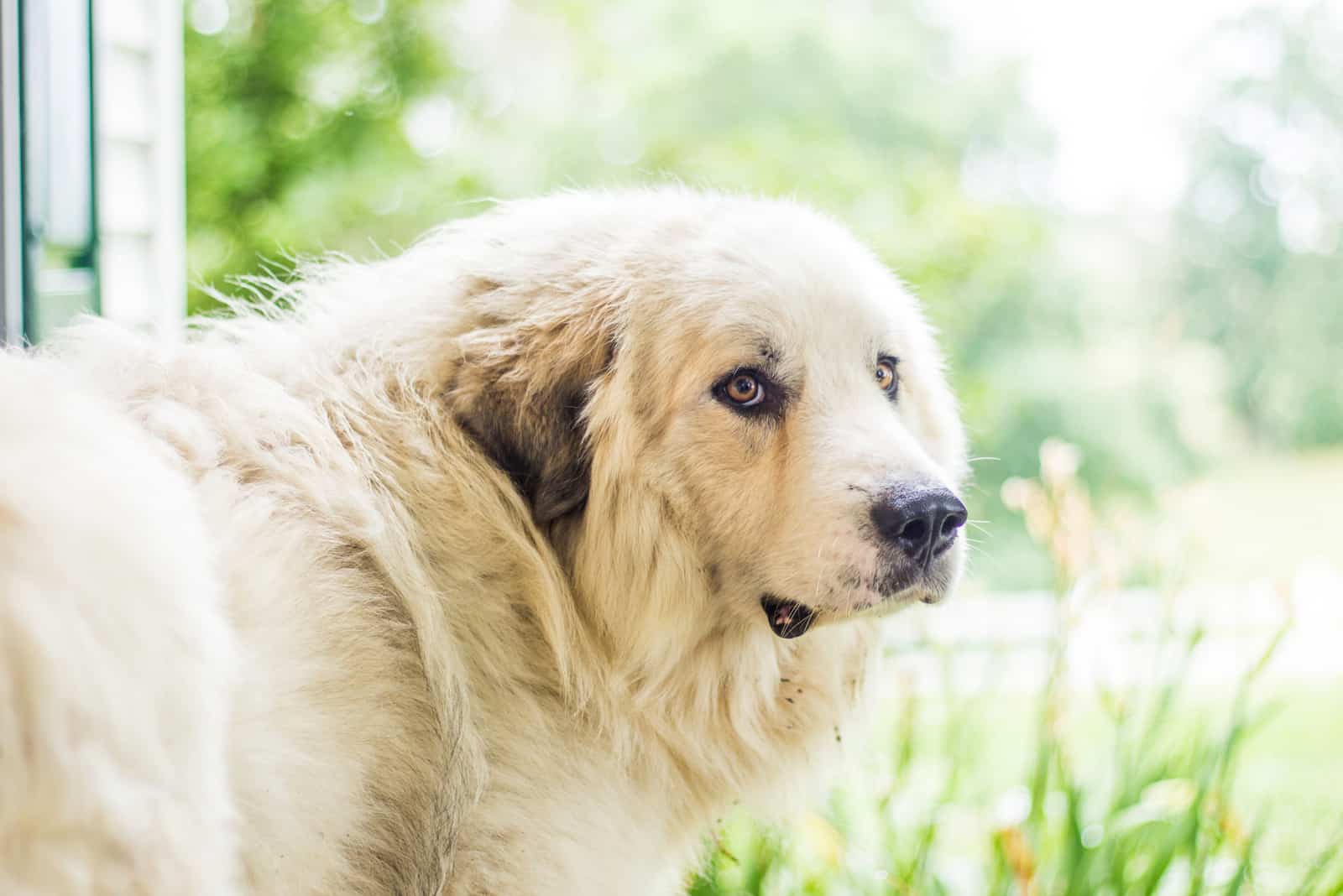 It is true… Great Pyrenees are all- white dogs in most cases, and that is their official color. But, hey… isn’t it white light that contains all the other colors within?

Nevertheless, this is one of the biggest and fluffiest dogs in the world. He is also among the tallest dogs out there (prepare a lot of dog food for this one). Some say that it is a bearlike dog that resembles a white polar bear. Others say that he is more of a wolf-like dog than bear-like. Sometimes, he could even end up on the spotted dogs list.

Our white beauty is all that and much more. He is a protector, a livestock guardian dog , a herding dog, a working dog , a watchdog, and a family dog . He is beloved both in his homeland and all over the world. And… he is snow white.

If you maintain his coat regularly, then you will have a large dog that looks like a large ball of snow. And, you should consider the grooming needs of this dog because we are talking about a thick outer coat as well as undercoat . Now, let’s see more about the Great Pyrenees’ colors. 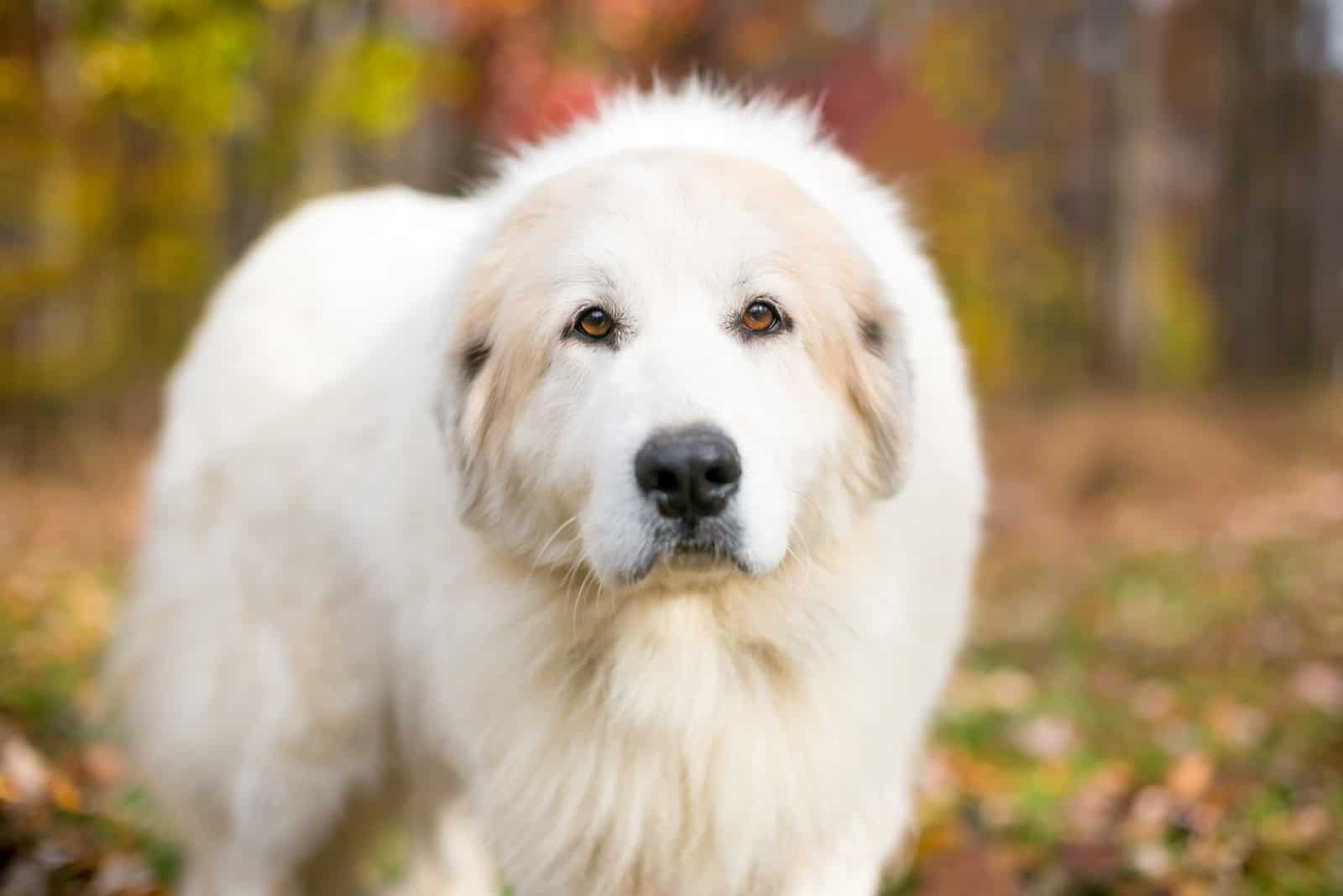 This chart shows officially registered colors and markings that are approved for conformation shows. These colors are also approved by the official kennel cubs.

There is actually only one true color in this chart, and it is white. That is almost like a trademark of the Great Pyrenees dog . The American Kennel Club (AKC) prescribes breed standard s with a few variations in the shape of markings, and they are all here in this chart.

When it comes to the Great Pyrenees colors, the first and main color we can talk about is white. One might think that if the Pyr is not all white, then he is not purebred. There are variations with markings, and we will say something more about them, too.

White coloring is a sort of hallmark of this breed of dog. What sometimes happens is that puppies have a bit of coloration that washes off in adulthood, so the adult dog has an all- white coat .

Sometimes, these puppies are not purely snow-like white, but they can have a bit of a creamy shade of white – s omething like creamed coffee, and it is called full Blaireau. But, with time, this color washes down into white. 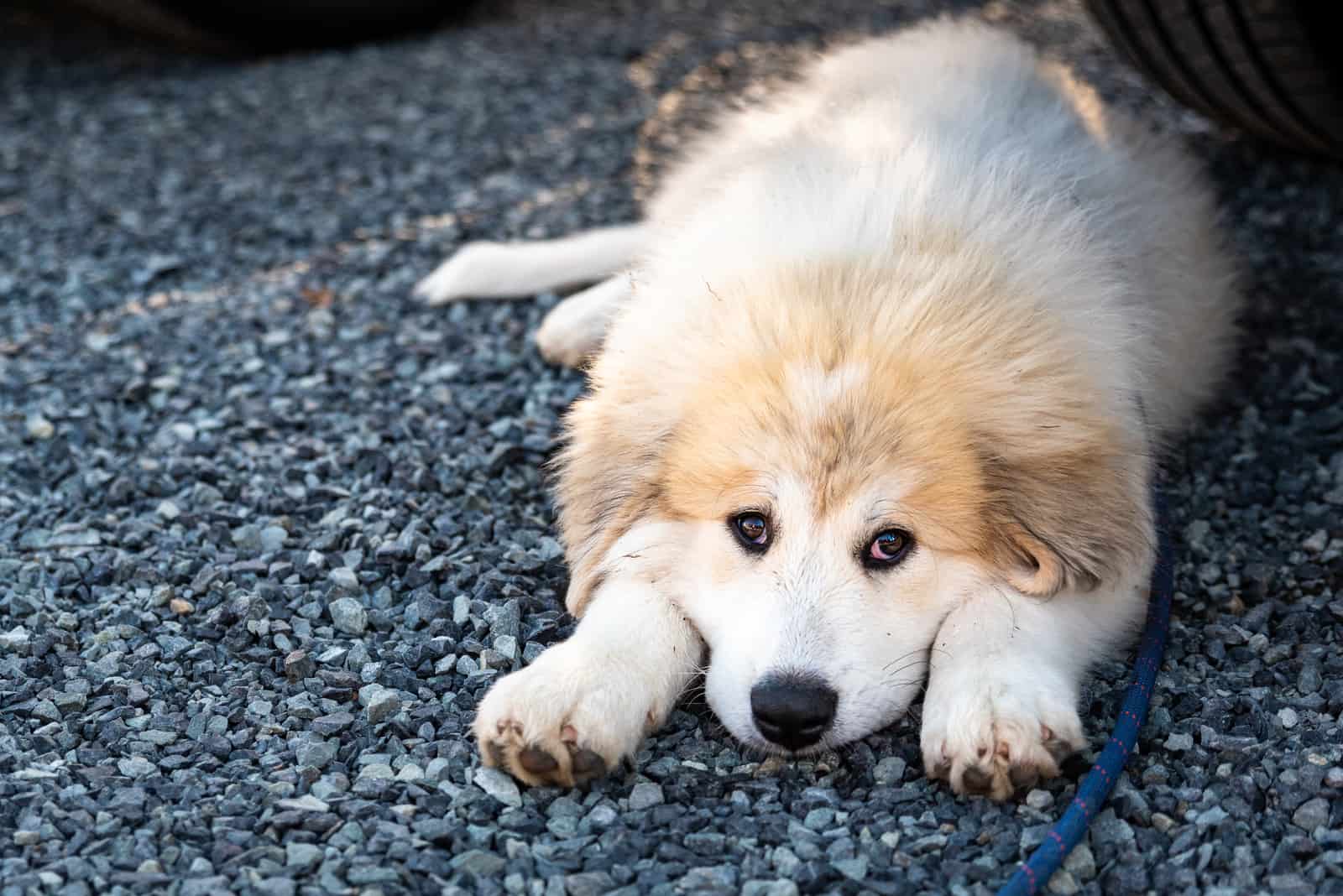 When we talk about Great Pyrenees colors, and someone mentions markings, many people don’t believe it is possible that these dogs are purebred . But… they are. Having a mark where it doesn’t prevail 1/3 of the total amount is allowed , at least for the breed standard . And, these dogs are still considered purebred .

These marks can appear as tan markings, gray markings, badger markings, and reddish-brown markings . Badger is called blaireau in French , and gray is after the shade of gray that European wolves have. Reddish brown can vary from pale yellow to the pale orange that is called arrouye in French .

They often occur around the ears, tail, and on the head , and there could be a spot here and there on their large body.

What is specific for these markings is that they can fade as the puppy becomes an adult dog. Some people claim that they can reappear again in adulthood, even though they have faded before. This probably happens because the coat is renewing. It is well known that the Great Pyrenees shed s a lot.

There is an idea that having these markings in the first place has its own cause. It is probably an evolutionary trait that developed to help this shepherd dog breed hide among the rocks. Since his main task was to fight with all sorts of predator animals, it was important to hide newborn puppies as best as possible.

What About Black Markings? 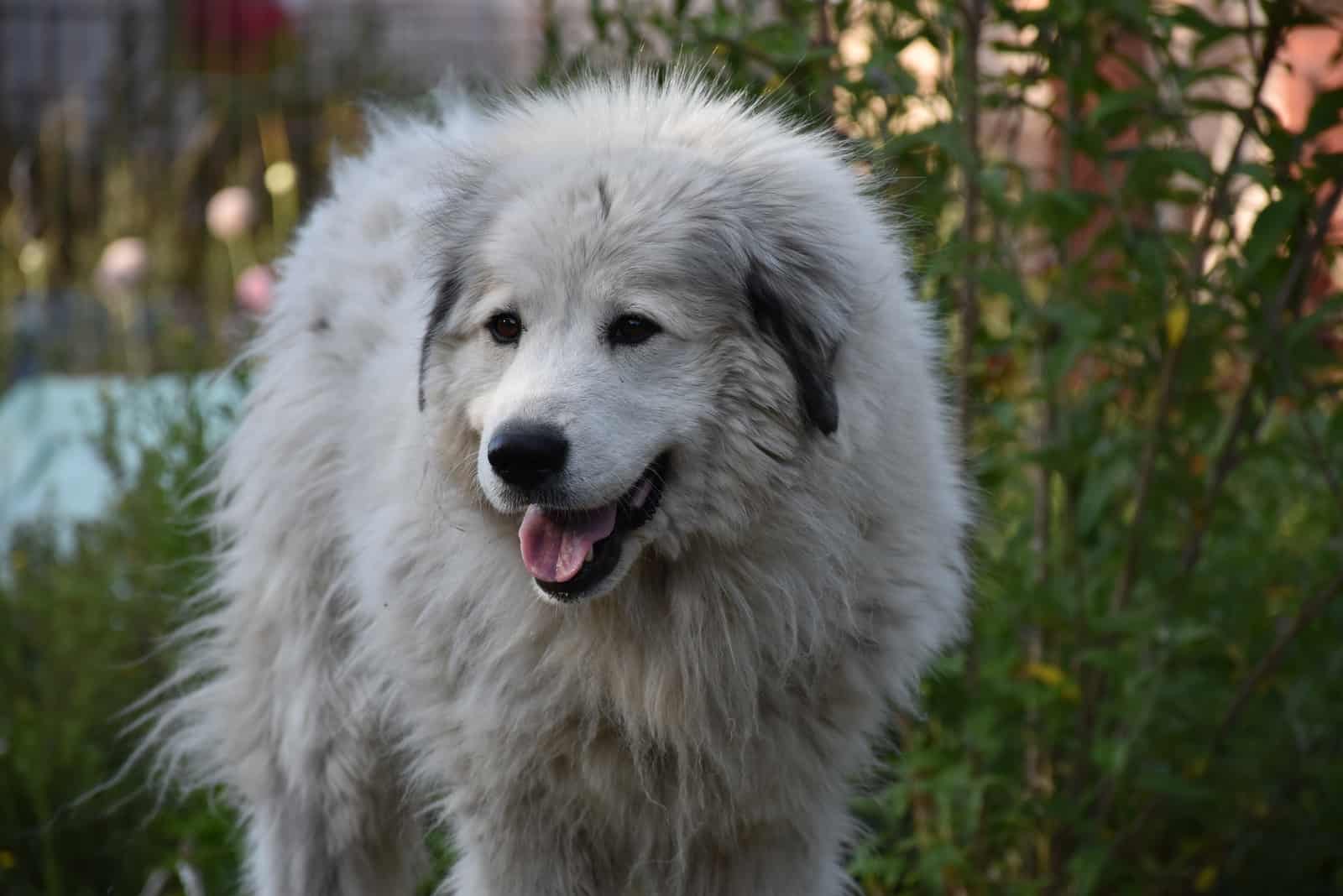 Straight and forward – black markings are not allowed according to the breed standard . This applies to dark brown markings, too. Having black markings is an indicator that a dog is not a purebred dog.

This means that it is probably crossed with some other dog like a Border Collie or some other cattle dog. There might be a practical reason for this. Since big dogs are prone to some typical illnesses, such as bloat or hip dysplasia , maybe they wanted to reduce the possibility of transferring the carrier genes to the next generation.

Black and badger are different in a way that at badger spots, hair is colored only on the tip. All in all, the breed standard was defined according to the idea of what Pyrenean shepherds thought a true Pyrenees dog should have. And, that is a tail that reaches the hock joint, hind legs that have double dew claws , and badger markings.

These shepherds would say that dogs with black marks are probably mixes, and those markings are thought to be of the St. Bernard mix or the Newfoundland mix . This could be true if we check out Newfoundland and Saint Bernard colors .

To Wrap It Up On The Great Pyrenees Colors 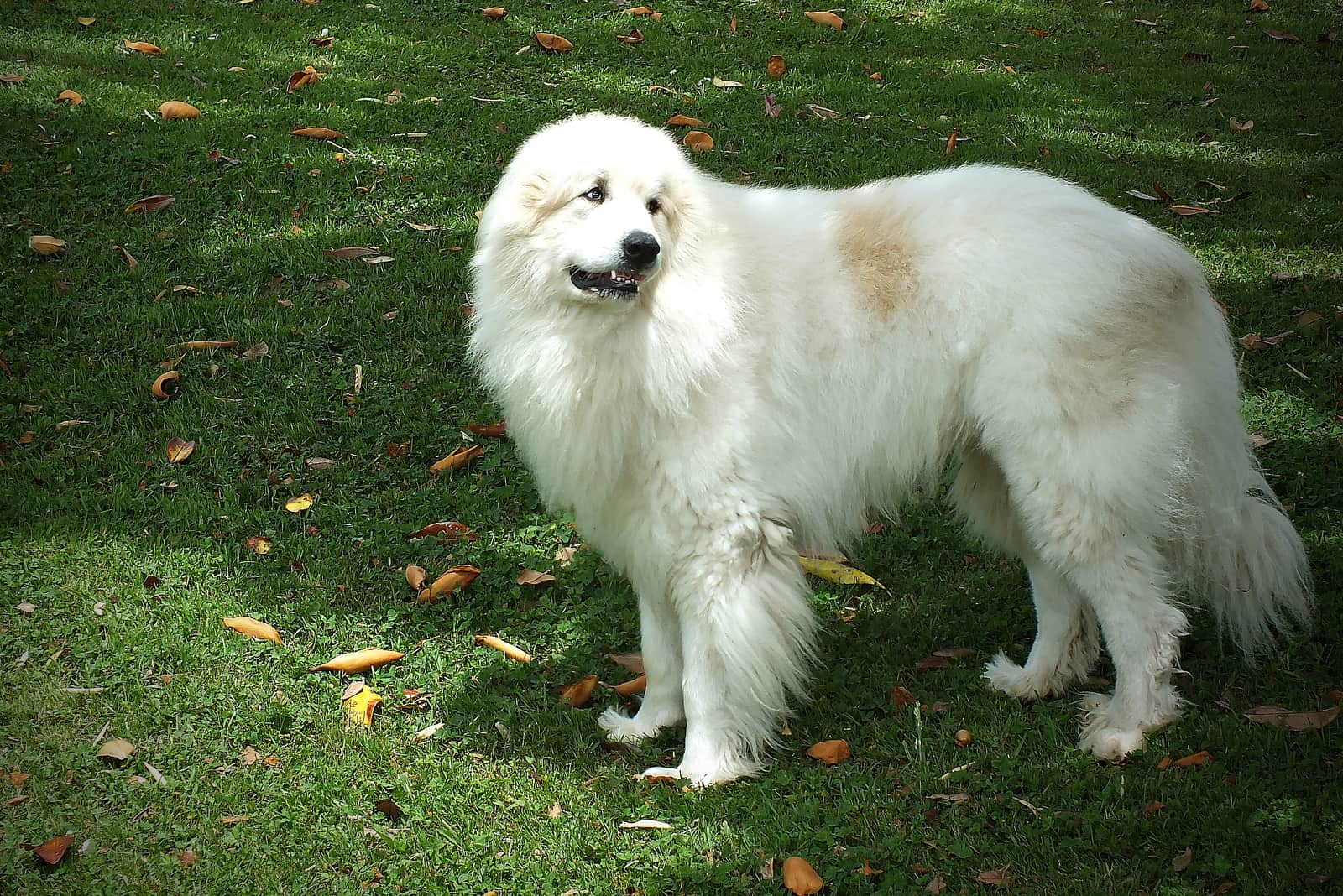 Well, what more can be said of the Great Pyrenees colors? For me, it is an utterly beautiful dog that is noble and brave at the same time. I think that no one can stay immune to the sight of the giant white ball of fur that is, at the same time, playful and protective.

Even though you might get the desire to get yourself this breed, remember to do some research first. It has many good traits. You must remember that this dog sheds a lot, and his hair is not hypoallergenic . This is a big problem if you have allergies. He has a shorter lifespan just as many other dog breeds , and he drools a lot.

You must also remember that it is not a dog for an inexperienced owner, and you have to start with early socialization to raise yourself a dog that will be a suitable family pet.

All in all, this dog is definitely a white delight that will win you over with his beauty and personality. Tell us… Do you like this snow-white rhapsody with beautiful markings?

Husky Colors: Picking The Most Beautiful One!

Maltese Colors Guide: Do They Appear In Shades Other Than White?

Great Dane Colors, Markings, And Patterns – Which Ones Are Standard

16 Best Examples Of Dogs That Look Like A Golden Retriever

[…] they share a lot of physical traits, coat shades aren’t some of them as Great Pyrenees are usually covered in hues like gray, white, tan, and red, while Golden Retrievers come in dark, light, and standard golden, as well as cream […]

[…] can be in any of the Newfoundland colors or the Great Pyrenees colors, however, the most prominent ones are the pure white or champagne, inherited from the Great […]

Is The Great Pyrenees Poodle Mix (the Pyredoodle) For You?

[…] markings of colors such as tan, gray, light red and badger. There aren’t a huge variety of Great Pyrenees Colors since this dog breed is mostly white in […]

29 Best Mastiff Breeds That Can Be Good Family Pets