If you’re searching for a new puppy, and you’re a lover of agile hunting dogs with a merry temperament and elegant looks – the English Setter might just be your new best friend.

The English Setter is a bird dog breed whose history goes back to around half a century ago.

The earliest written evidence of the English Setter breed suggests that it was created from crosses of the large Water Spaniel, the Springer Spaniel, and the Spanish Pointer breeds.

It was originally developed to serve as a hunting dog for pheasants, and larger game like grouse – the name Setter was given to the breed because of its ability to “set” itself down when it found game birds.

Although it was bred for the specific purpose of being a gun dog, over time, the English Setter has evolved into two different types due to selective breeding by human intervention in the early 1900s.

These two distinct types are called the Llewellin Setter, which was developed for field performance and has less feathering, and the Laverack Setter, which is a bit larger and more suited for the show ring, with a long, silky-smooth coat.

Whether you want to own a Laverack or a Llewellin Setter, you’re probably on the hunt for the best English Setter breeders in the U.S. – and that’s where we can help you out.

English Setter Puppies For Sale In The U.S. 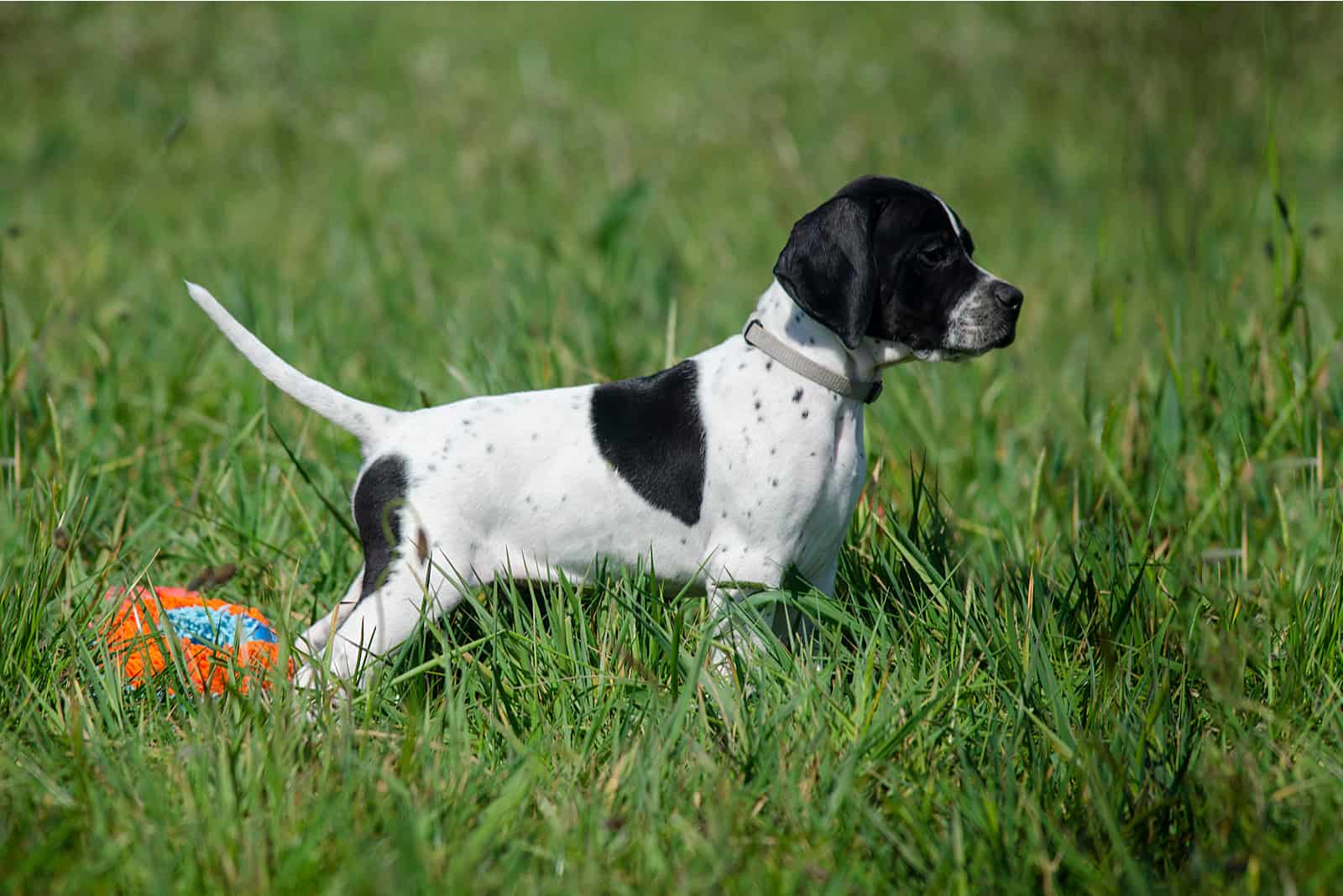 Before we jump in and talk about who the three best English Setter breeders in the U.S. are, it’s important for us to quickly go over the difference between good and bad breeders in general.

It’s crucial to source your new pup from a reputable, licensed, and ethical breeder who has good word-of-mouth references in order to buy a dog that’s as healthy as possible.

Reputable English Setter breeders will adhere to the highest ethical breeding standards and will care for their dogs from the moment they are whelped until the day they are able to leave for their new home.

Unreliable breeders, such as backyard breeders and puppy mills are to be avoided at all costs – these self-proclaimed breeders usually aren’t licensed and don’t take good care of their breeding stock.

That said, rest assured that our list of the three best English Setter breeders in the U.S. consists of only the most reputable and reliable breeders, and that no matter where you’re located, the breeders will be able to ship your new family companion right to your doorstep – unless, of course, you want to pick it up yourself. 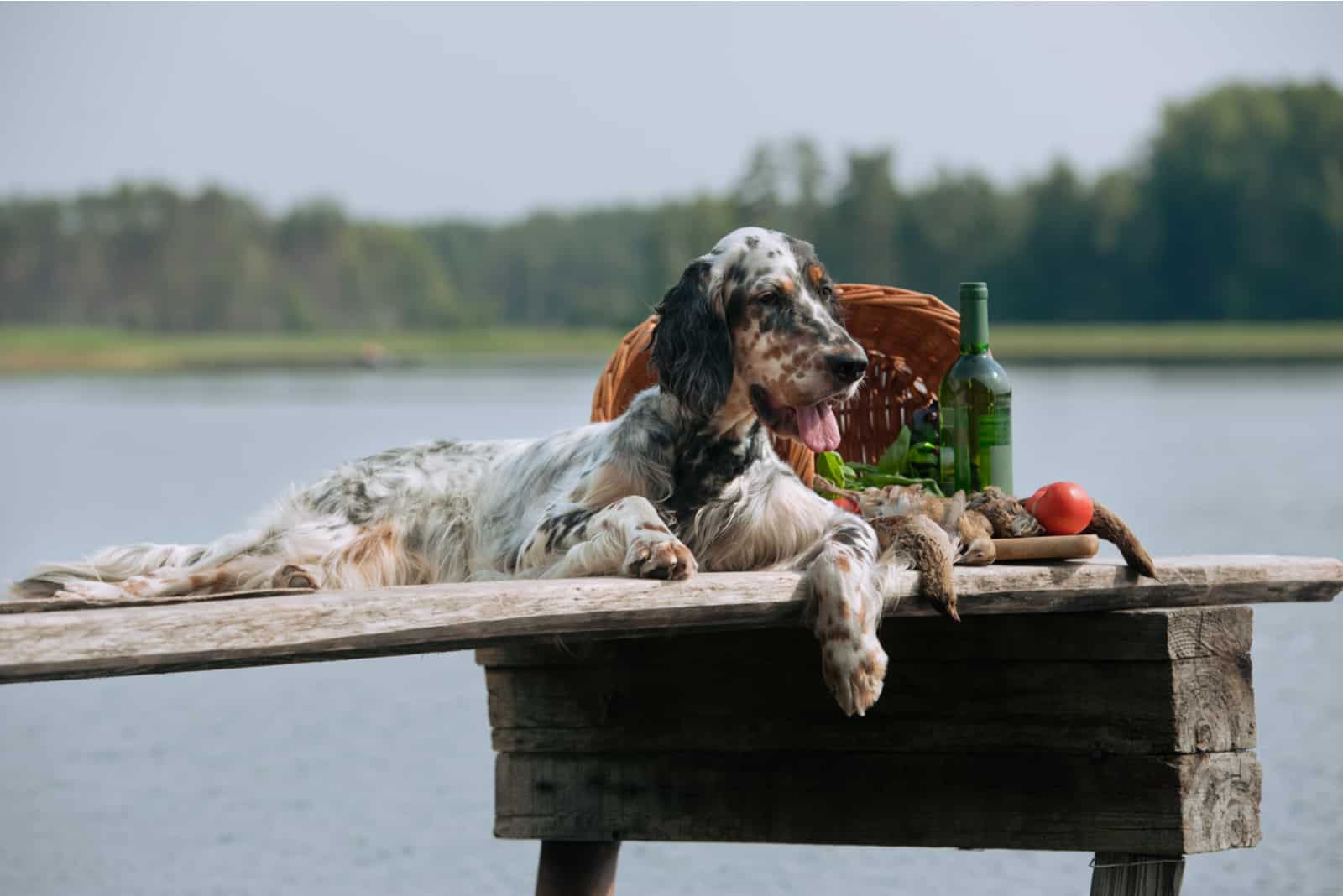 Our first spot goes to DeCoverly Kennels; a breeding outfit that’s located on a twenty-thousand square foot complex in the small town of Falls, Pennsylvania.

DeCoverly Kennels is a state-of-the-art breeding outfit that has over forty years of experience in breeding, raising, and training some of the highest quality English Setters in the United States.

More than four decades of research, effort, care, and passion for the breed have resulted in litter after litter of purebred puppies that perfectly adhere to the English Setter breed standard established by the AKC – a complete package of conformation, personality, hunting instinct, and intelligence.

The DeCoverly Kennels’ breeding program focuses on carefully planned litters, and utilizes only health-tested parent dogs that they’re all OFA/BAER (Brainstem Auditory Evoked Response) evaluated and cleared of breed-specific, genetic illnesses such as hip and elbow dysplasia, bloat, deafness, etc. in order for the pups they produce to be as healthy as possible.

In order to be accepted into their breeding program, their breeding dogs must first pass a strict set of criteria over a two-year period of evaluation, which includes field trials, biddability tests, and trainability tests, so you can rest assured that DeCoverly English Setters are prime examples of this elegant hunting breed.

All of DeCoverly Kennels’ English Setter puppies are given plenty of early neurological stimulation and socialization with humans and other animals, as well as given their first set of shots, dewormings, and a microchip.

Each English Setter puppy purchased from DeCoverly Kennels comes with full or limited AKC registration, a two-week infectious disease warranty, a ten-year working life health guarantee against bilateral blindness and hip and elbow dysplasia, as well as a lifetime of support and advice from the breeders themselves.

To find out more about this amazing English Setter breeder, make sure to check out their website and get in touch with them via phone or email once you’re ready to start the process of buying your new pup. 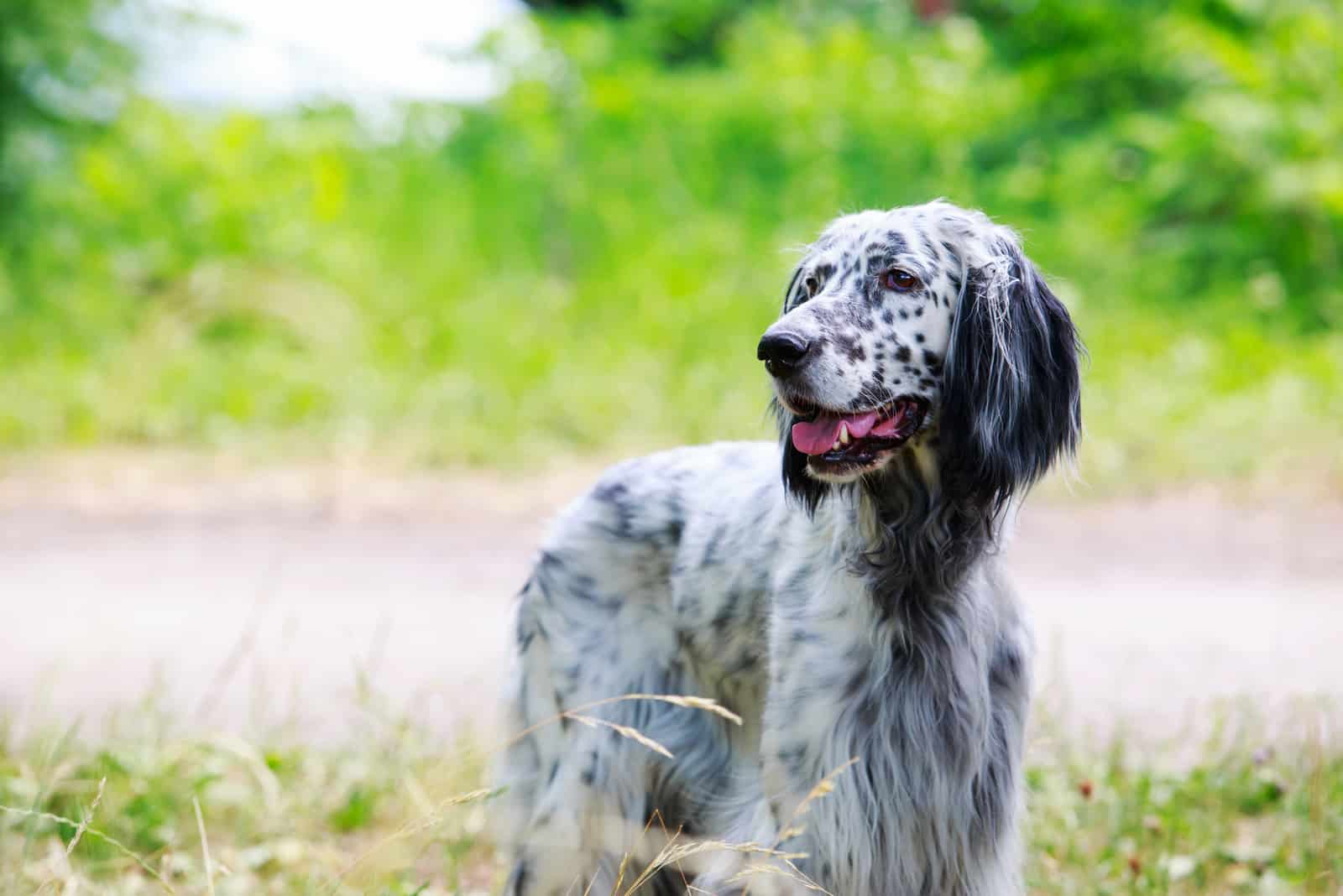 Our next spot on the list of the best English Setter breeders in the U.S. goes to Triple Creek English Setters; a breeding outfit that’s located in Lawrence, Michigan.

Established back in 1987 – Triple Creek English Setters is a family-owned and operated breeding outfit that’s helmed by experienced breeders and married couple, Rosemary and George Wheatley.

They specialize in breeding, raising, and training purebred Laverack English Setters that are true to the type – excellent conformation, sound temperament, and easy trainability.

Triple Creek English Setters is a proud member in good standing with the ESAA (English Setter Association of America) and the English Setter Club Of America (located in New Jersey), and is an AKC Breeder of Merit.

The breeding team at Triple Creek English Setters makes sure that all adult dogs that enter their breeding program have priorly had their hearing BAER tested and certified, and have been OFA cleared of hip and elbow dysplasia.

Pups are given plenty of socialization with humans and other animals, as well as lots of early neurological stimulation in order for them to get used to different sounds, smells, and environments – therefore, gradually being accustomed to living in a family environment.

All of Triple Creek’s puppies are given their first set of immunizations and deworming medication, as well as properly health checked and microchipped for identification.

Puppies are sold with their rear dewclaws removed, BAER hearing tested, with limited or full AKC registration, a five-day health guarantee, and a lifetime of support for new owners.

If you’re interested in finding out more about Triple Creek’s English Setter puppies, make sure to visit the breeder’s website and get in touch with them in order to buy an available puppy or reserve one from an upcoming litter.

Their pups are priced at $1500 regardless of color or gender, and you will be required to place a $500 deposit in order to reserve a puppy. 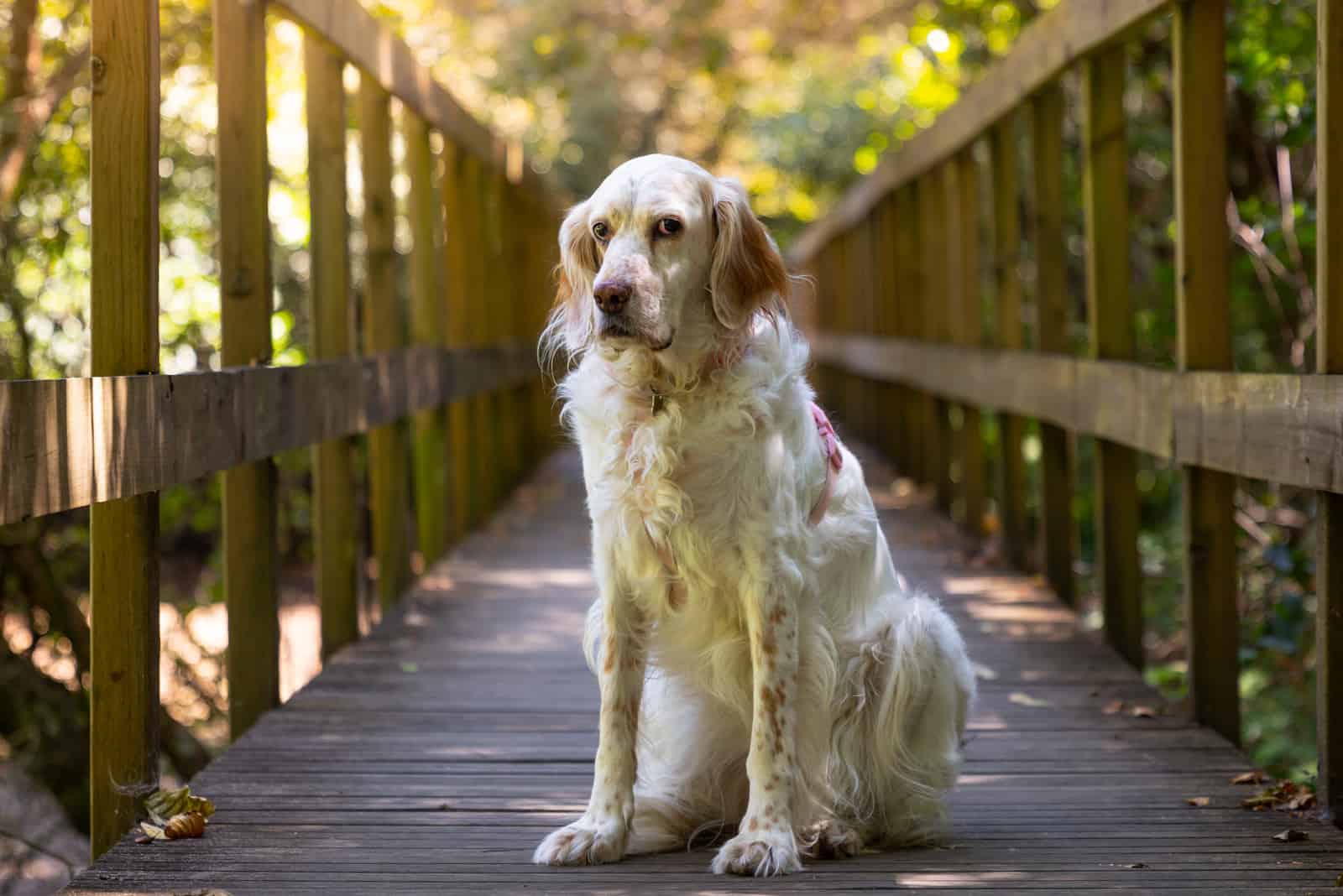 Our third spot on the list of the best English Setter breeders in the U.S. goes to Lyon King Llewellin Setters; a breeding outfit that’s based in Mount Airy, North Carolina.

Lyon King Llewellin Setters was established in 2011 by married couple, Debbie and John Lyon, and it’s a breeding outfit that specializes in producing field-type Llewellin Setters that are true to the breed standard – dogs with a high prey drive, easy trainability, and characteristic temperament.

The breeding team makes sure to preserve and improve upon the purebred American Llewellin Setter bloodlines with each litter they produce – resulting in healthy and intelligent pups that retain the workability that this breed is known for.

They also make sure to only use breeding dogs that are OFA-cleared of congenital hip and elbow dysplasia, and BAER hearing tested in order for their puppies to be as healthy as possible from the get-go.

Each puppy is given plenty of early neurological stimulation and socialization with other dogs, animals, and humans in order for them to grow into well-rounded young pups that are eager to please and easy to train.

All of their English Setter puppies are vet checked, vaccinated, dewormed, and microchipped before they are put up for sale.

In addition to that, each puppy is sold with its rear dewclaws removed, limited or full AKC registration, a health guarantee, a new puppy starter pack with food and toys, as well as a lifetime of support from the breeding team.

Make sure to check out their website and get in touch with the breeders via phone as soon as possible if you want to buy one of their high-quality Llewellin Setter puppies.

Their English Setter puppies are priced at $1200 regardless of gender or color, and puppy shipping prices will apply if you want the puppy to be delivered to you. 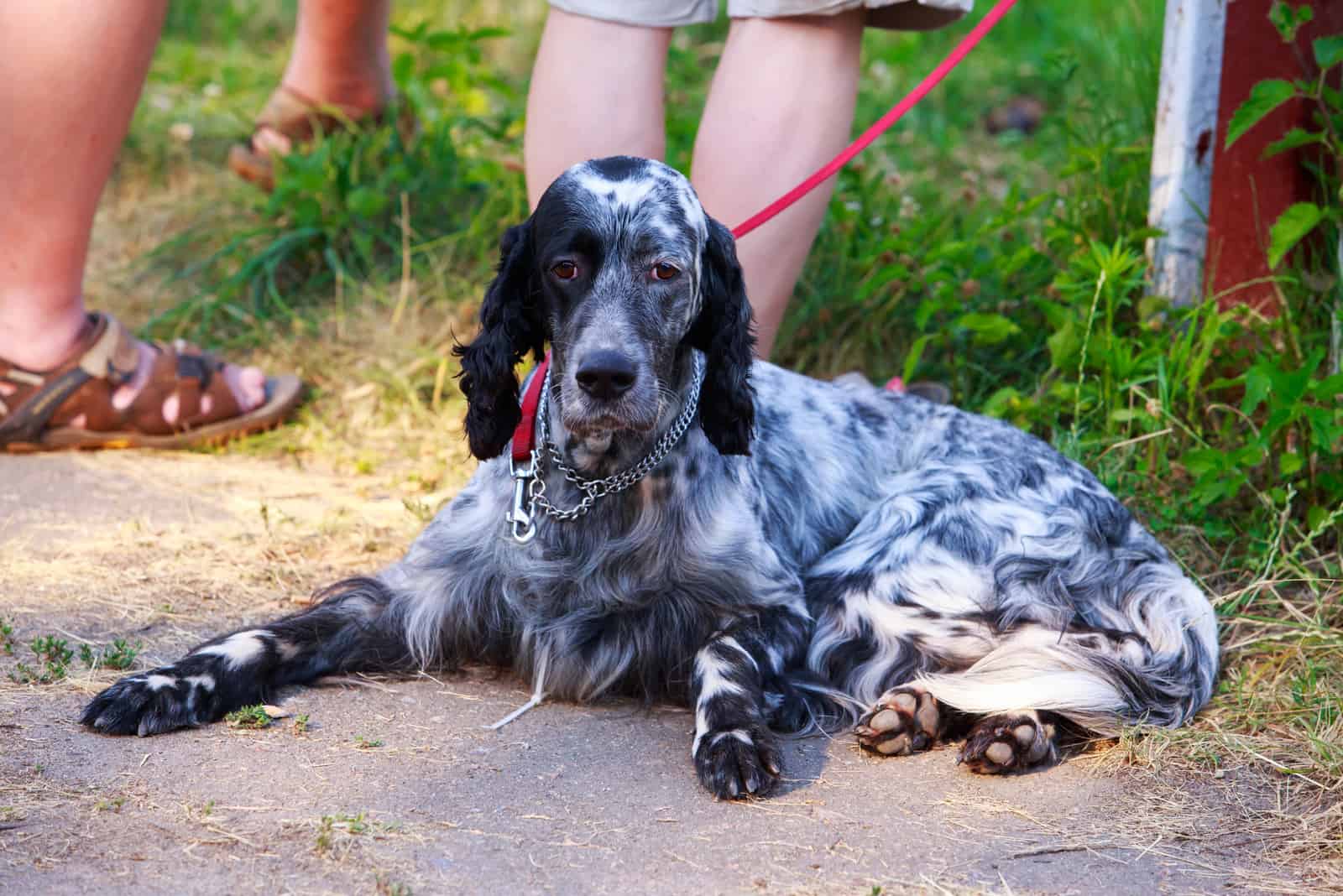 All in all, English Setters are generally great dogs for someone who needs a hunting companion or just a lovable family companion.

Their sweet nature, beautiful coat, and elegant demeanor will melt your heart as soon as you see one, and their lovey-dovey attitude toward their family members will always leave you wanting more.

However, English Setters are not the type of dog breed that’s content with sitting around on the couch all day long – in fact, they function their best when they have a job to do.

If you don’t plan on using your new pup as a hunting dog, at least make sure to give it the proper amount of daily exercise it needs in order to stay happy and healthy.

This will save you the trouble of chewed-up furniture since this breed will find a way to unleash its frustration if you don’t divert its energy elsewhere.

One more thing you should be aware of is your new puppy’s grooming needs. Just like other long-haired breeds, such as the Labrador Retriever need their hair brushed – so do English Setters.

Make sure to invest in a quality soft-bristle brush in order to maintain your pooch’s silky-smooth coat and keep it tangle-free.

We hope that this list of the three most reputable English Setter breeders in the U.S. will help you in your effort of finding the perfect new best friend.

• The 8 Best Bloodhound Breeders In The U.S.

At Pupvine, we believe every dog deserves a forever home, and every owner deserves a good boi. This is where we step in! From early puppyhood to the complex adult stages, here’s where you’ll find all the info you need to raise your Fido or Fiona the best way possible. Pupvine is more than the average dog-related website. It’s a life philosophy that teaches us dogs are more valuable than we could ever think of. Our furry best friends need more than they deserve for all the love they’re giving unconditionally. We at Pupvine strive to make it easier for YOU, so you can make your dog’s life just PAW-fect!