All dog owners want what’s best for their pups. However, we can’t always resist the ‘puppy face’ they give to us during lunchtime, even if we’re eating food that doesn’t seem good for them.

This leads us to our main concern:

Can dogs eat wasabi, or should you worry if they take a bite from your sushi plate?

Dogs are voracious eaters. They aren’t known for being the pickiest eaters out there either, and they won’t hesitate to steal a bit of human food from you.

Sometimes, this can cause serious harm to your pooch. So, what about wasabi? Can dogs eat it, or will it damage their health?

Let’s get straight to the point.

Contents show
1 Can Dogs Eat Wasabi?
2 What Is Wasabi?
3 Does Wasabi Have Health Benefits?
4 Is Wasabi Bad For Dogs?
5 What About Dogs With Health Issues?
6 Possible Side Effects
7 Can Dogs Eat Wasabi Peas?
8 What About Wasabi Almonds?
9 Watch Out For Fake Wasabi
10 How To Help
11 Keep Wasabi Away From Your Pup 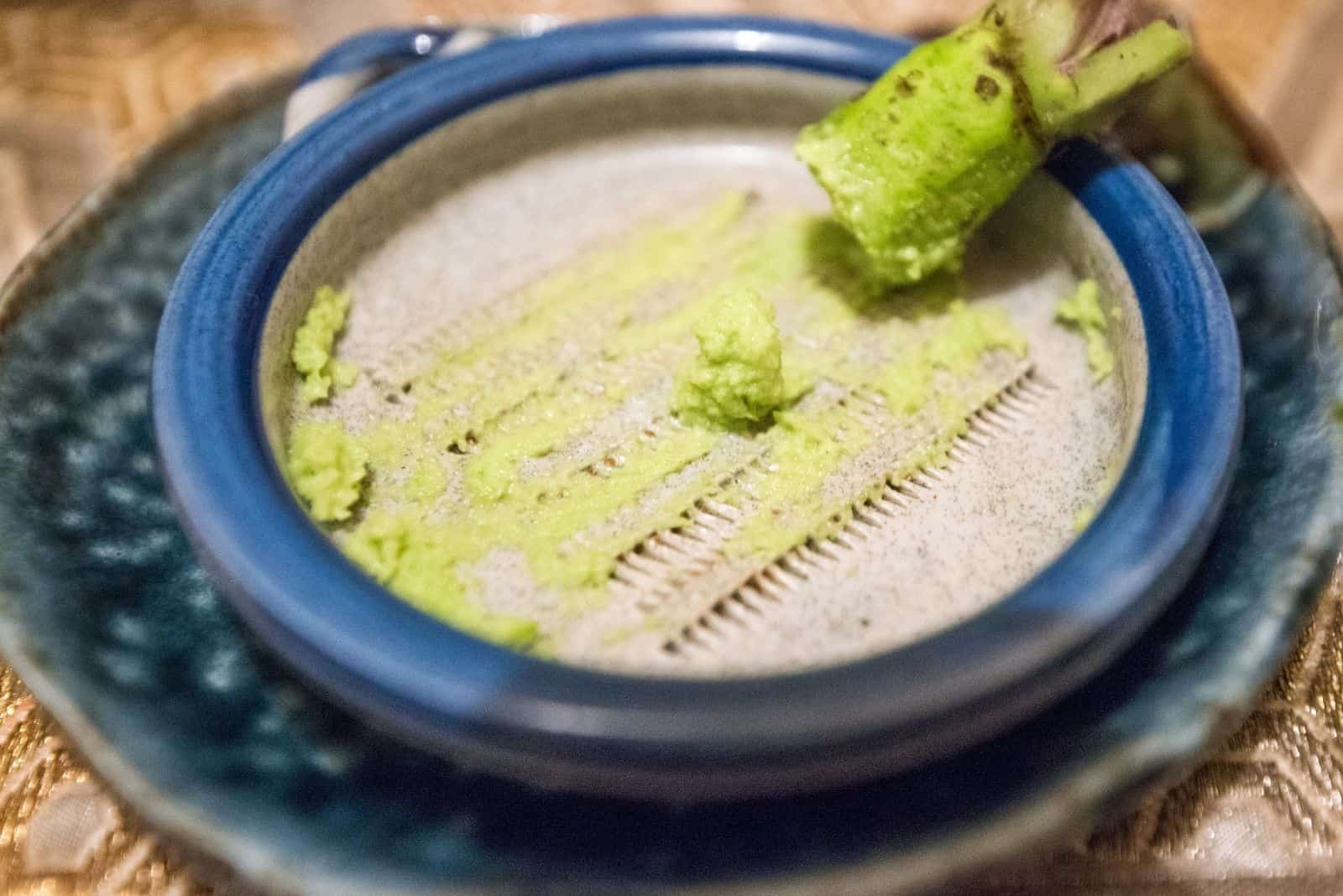 In short: No, you shouldn’t give wasabi to your dog, no matter the circumstances.

Dogs have very sensitive stomachs, and any spicy food can cause them discomfort. This, of course, includes something as hot as wasabi.

But what happens if your dog takes a bite of wasabi by accident?

Luckily, you don’t have to be concerned unless your dog really went for it. Wasabi on its own isn’t toxic for dogs, and it won’t poison them.

Of course, if you notice your pup is acting weird, you should absolutely take him to the vet. 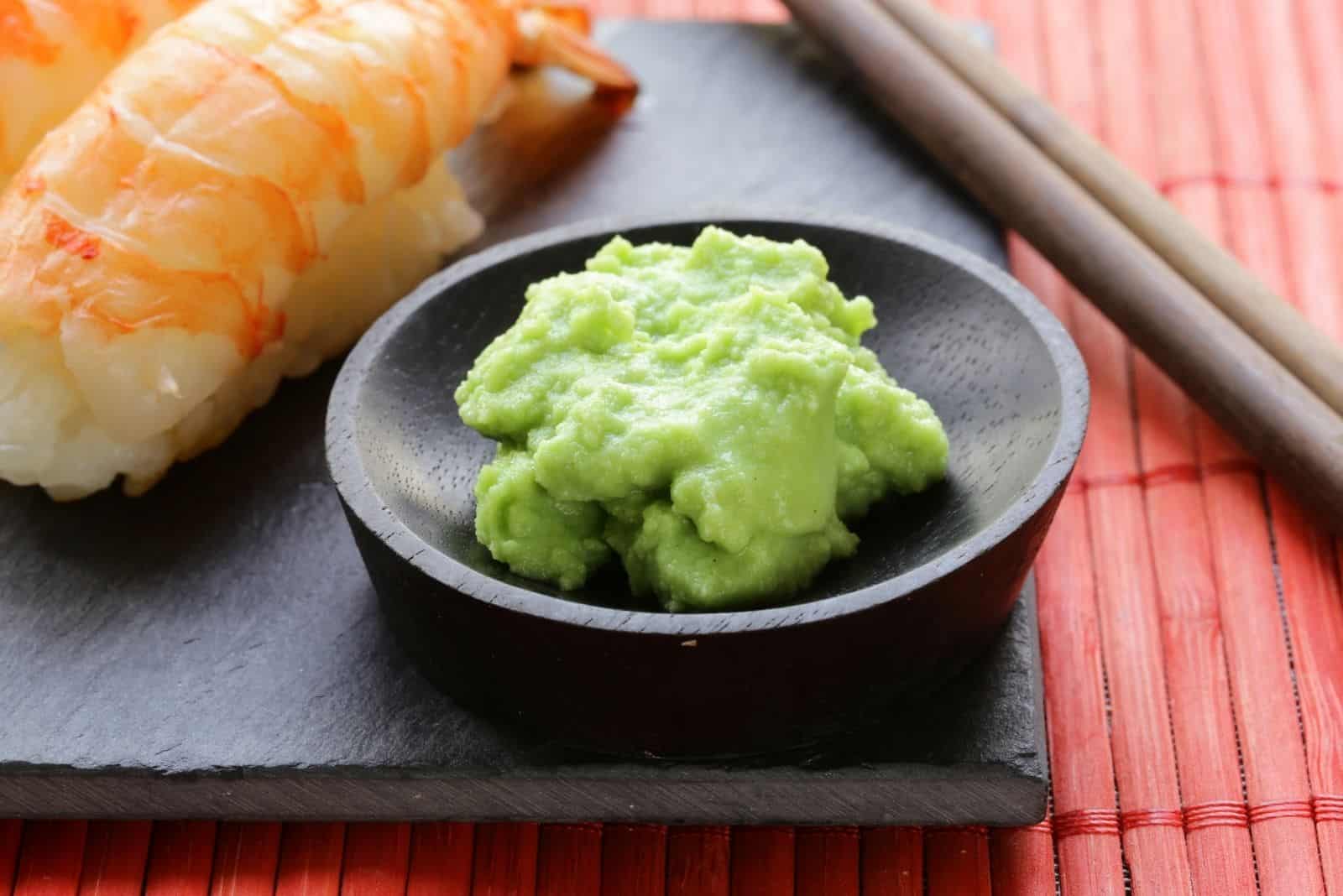 Before we can explore the topic deeper, you should know what wasabi is.

While people know wasabi as that spicy green paste served next to a plate of sushi, you can eat it with many different meals.

Wasabi paste is, in fact, made from the plant stem of the Wasabia japonica, a type of Japanese horseradish.

It belongs to the Brassicaceae family, the same family as mustard and cabbage. While it’s spicy, just like peppers, its taste comes from allyl isothiocyanate, while pepper’s come from capsaicin.

Plainly speaking, it contains different chemicals to other ‘western’ spices, such as chili peppers.

In fact, the wasabi scent receptors aren’t located in our mouth but rather right in our nasal passages.

Because of this, wasabi has that recognizable taste that goes ‘up your nose’ and through your sinuses.

Does Wasabi Have Health Benefits? 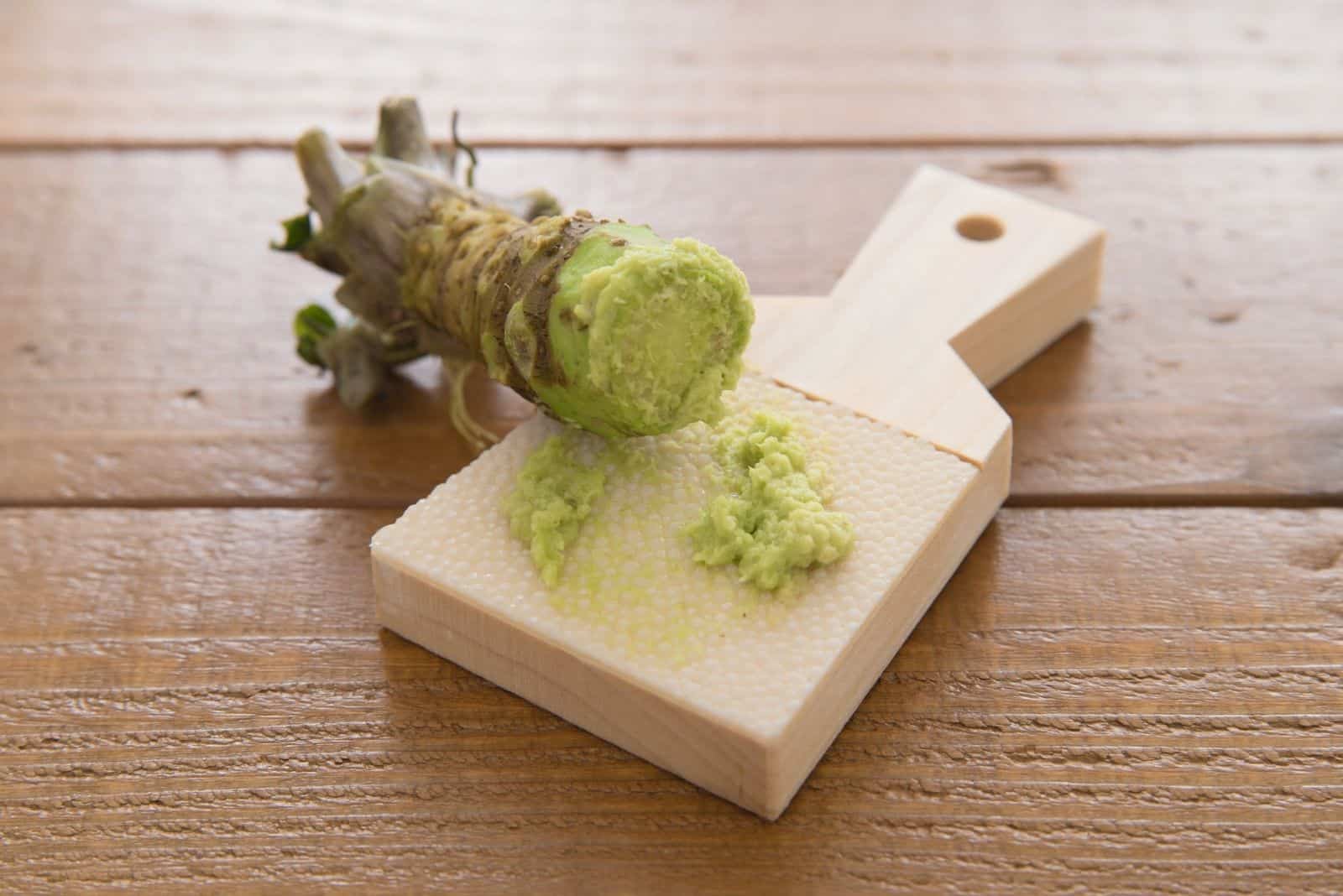 We’ve already mentioned that dogs shouldn’t eat wasabi. But, if they happen to take a bite, can they experience some health benefits?

In humans, wasabi has several good properties, such as antibacterial, anti-inflammatory, and it is even said to lower the risk of cancer!

Not just that, but wasabi can also help with asthma, allergies, and some neurodegenerative diseases.

For some people, wasabi can even lower headaches and help with sinusitis.

But what about dogs?

Are there any health benefits if dogs eat wasabi?

Currently, not enough evidence exists to support the claims that wasabi has the same benefits for dogs as it has for humans.

In fact, so far, there hasn’t been any notable research done to explore the topic.

Because of this, it isn’t wise to support the idea that wasabi can bring anything good to your dog’s health. We wouldn’t recommend you adding it to your dog’s diet.

Of course, as a disclaimer, you can always consult your veterinarian if you want to hear their thoughts about your pup eating wasabi.

However, there is plenty of healthy human food that you can give your pooch that will have the same health benefits, but without the issues. This includes:

Is Wasabi Bad For Dogs? 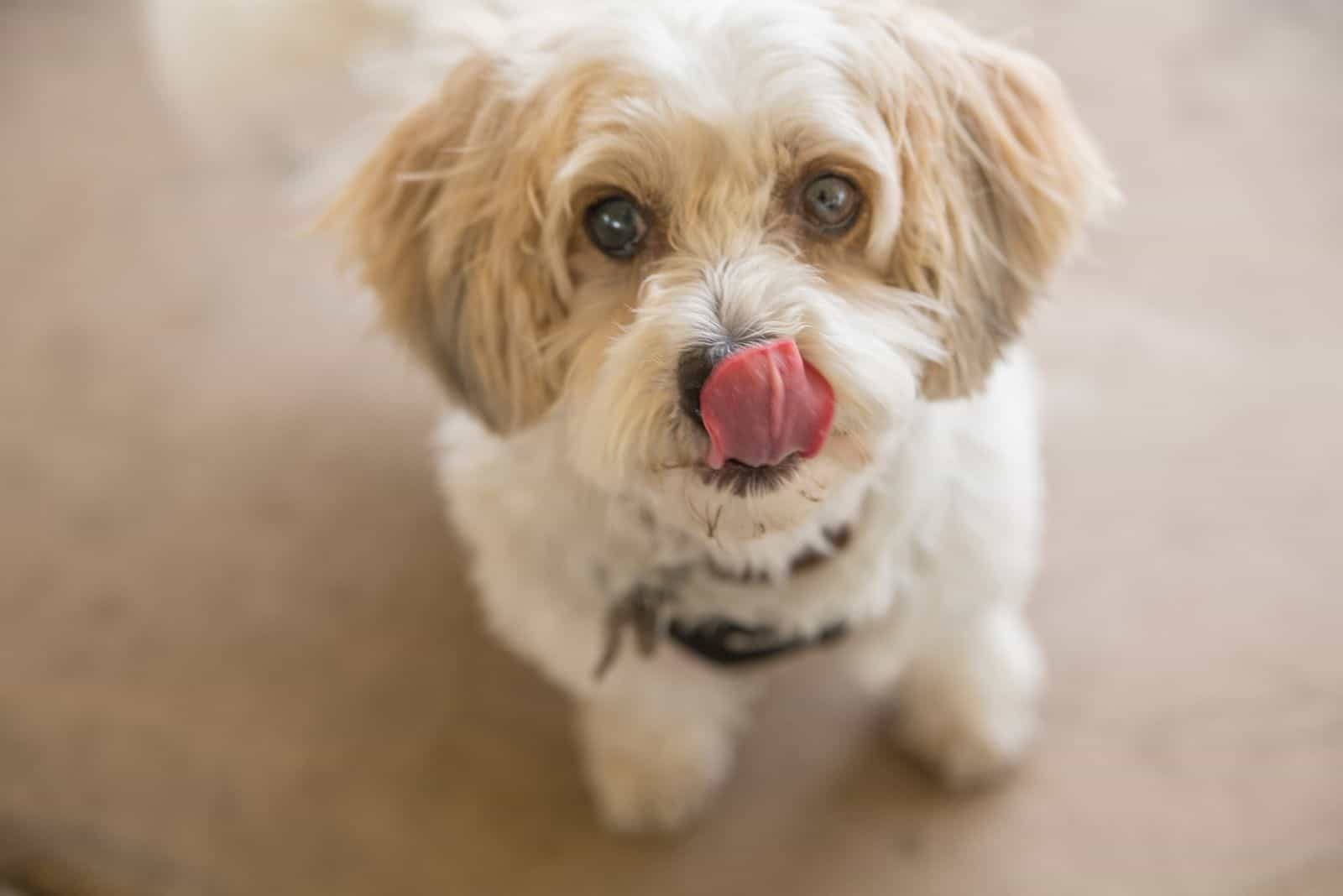 While wasabi isn’t poisonous for doggies, it certainly isn’t healthy, either.

Wasabi is very spicy and hot. A Dog’s digestive system can’t properly deal with the heat it produces, which can cause plenty of health problems.

A Dog’s mouth can experience burning, and your pooch might vomit or have diarrhea. At best, he’ll only have some flatulence, stomach ache, and severe drooling.

The wasabi uses the allyl isothiocyanate we’ve already mentioned as a defense mechanism against herbivores such as cows, deer, and horses.

Its taste is meant to be unpleasant to animals, and it’ll intentionally cause some harm to them.

All of this makes it very clear that dogs shouldn’t eat wasabi. If it can cause digestive issues for a horse, it certainly can do the same to a much smaller animal such as a dog, as well.

Of course, one taste of wasabi won’t likely cause serious trouble for your dog unless he has some problems with his digestive system or is very small.

On such occasions, even the smallest amount of wasabi can cause issues. 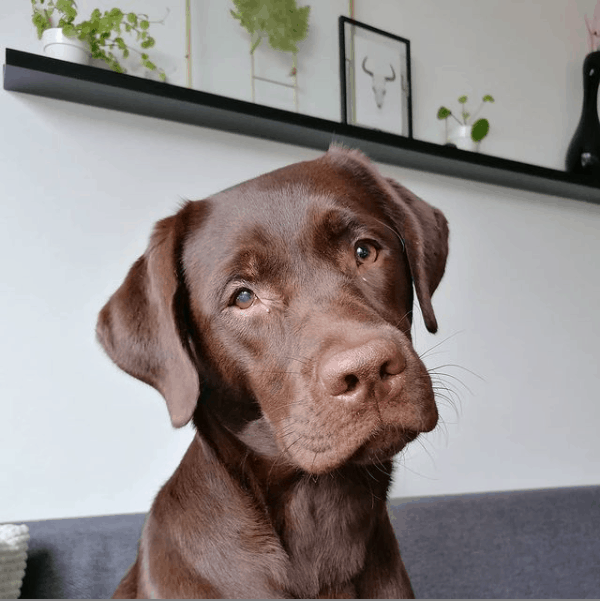 Still, there are plenty of reasons why you shouldn’t feed wasabi to your dog.

Firstly, your dog has much fewer taste buds than humans, so he won’t really care for the taste of wasabi. In fact, he probably wouldn’t even like it at all.

By comparison, humans have around 9,000 taste buds on their tongue, while canines only have 1,700.

This means your dog won’t feel the taste the same way you do – he’ll simply feel the pain of it being too hot.

In fact, most dogs will refuse to even try wasabi because of how bad it smells to them. Still, there is a chance that they might wolf down more of it than intended, as they can’t taste spices the same way we do.

Meaning, a dog won’t taste how spicy wasabi is until it’s too late. This can result in overeating and thus upsetting your dog’s stomach.

If this happens, your dog will experience many side effects, most notably digestion troubles, not to mention the possibility of mouth, throat, or nose irritation.

What About Dogs With Health Issues? 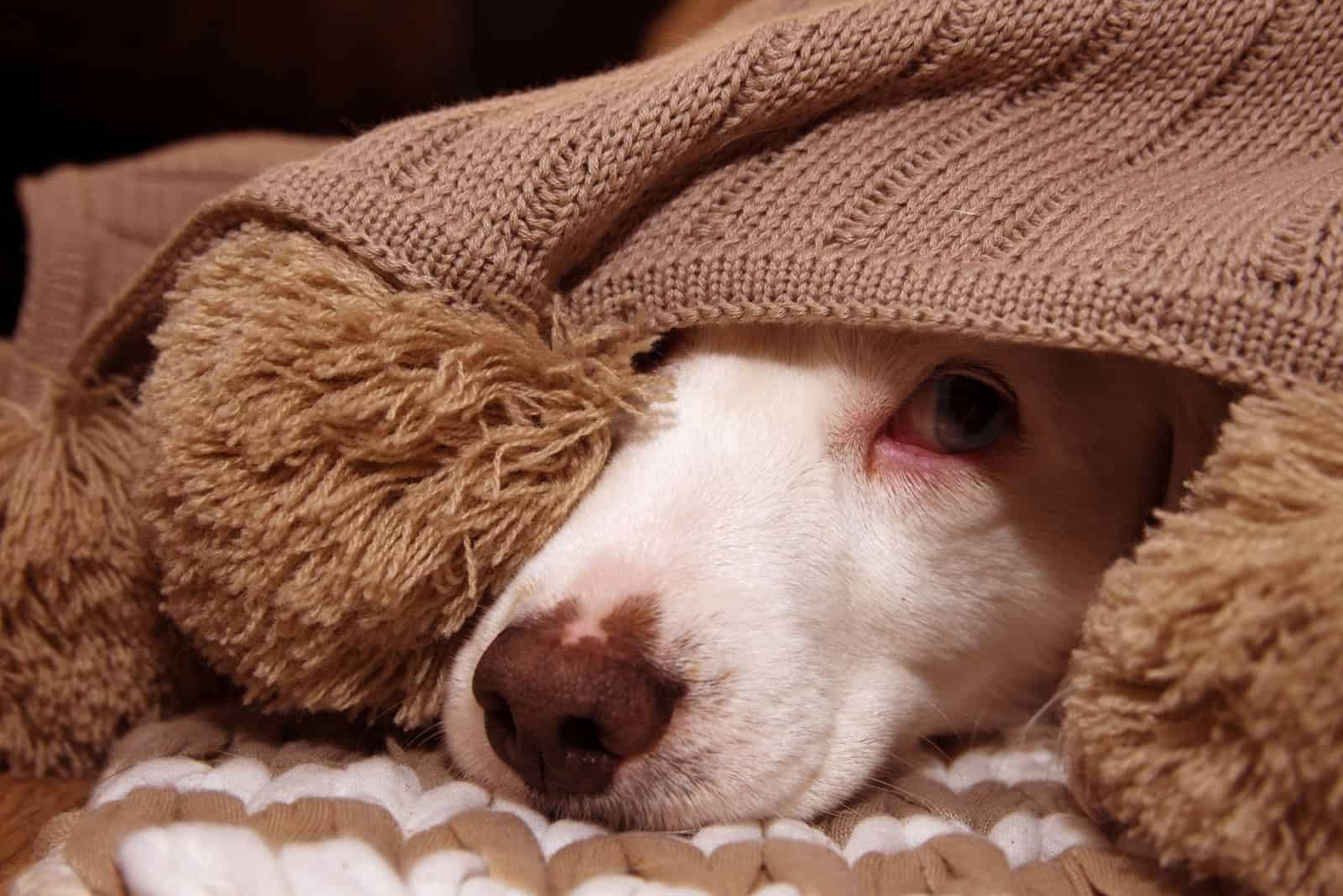 But what about pups with gastrointestinal or kidney diseases?

Suppose your pooch has some pre-existing medical condition that influences his digestive system. In that case, wasabi can be very dangerous for them.

In fact, your pet doesn’t have to be currently affected by a condition for wasabi to make things worse.

For example, chances are you don’t even know your pet has early-stage gastritis or some inflammation of the intestines.

If this is the case, wasabi will only trigger the condition and worsen the symptoms.

If your dog has any chronic gastrointestinal condition, it’s essential you feed him a balanced diet. This doesn’t include wasabi.

Contact your local vet to ask him which dog food is right for your sensitive pooch. There are plenty of healthy options you can find on Amazon. 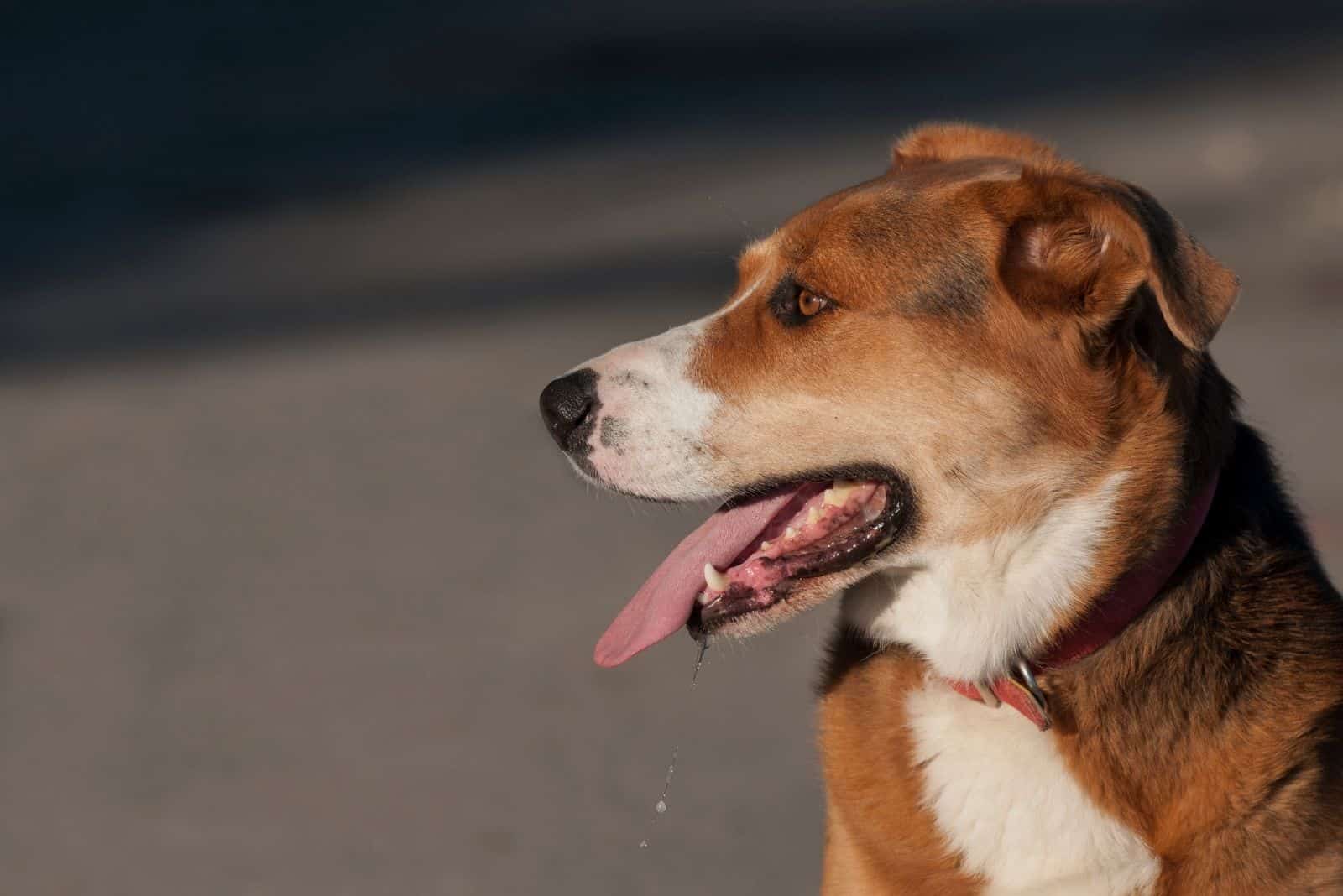 If you’re someone who eats a lot of wasabi or simply a wasabi lover who happens to own a dog, you should learn about all the side effects this paste can have on your pup.

This way, you can know exactly what to look for if your dog licks some off your plate.

Signs to be wary of include:

If you notice any of these symptoms in your dog, it would be wise to contact your local vet just to make sure your pup is alright. 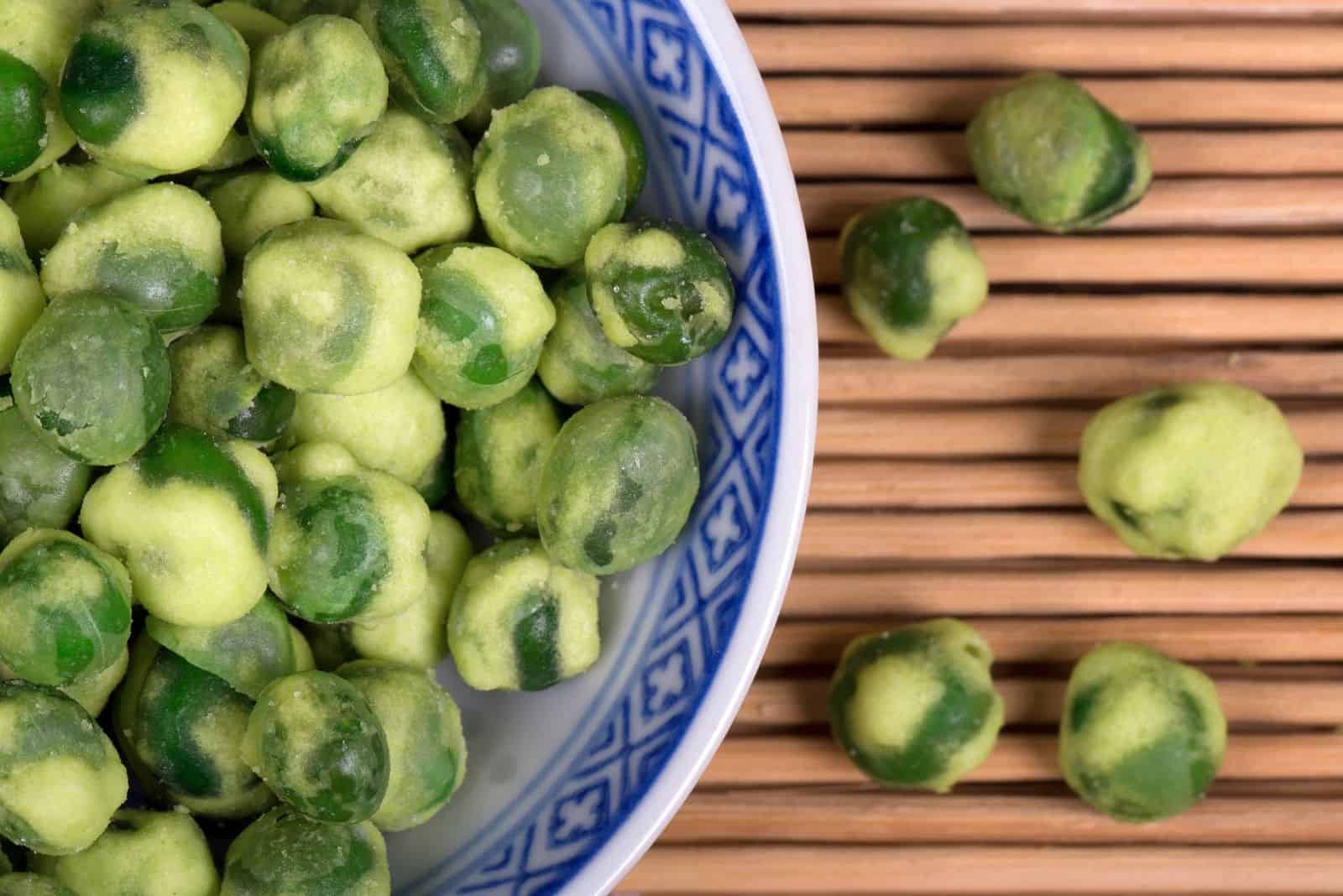 Wasabi peas are a type of crunchy snack made with peas coated in wasabi. Some of the ingredients they contain are sugar, salt, starch, and oil.

They are filled with good nutrients such as vitamins A, B, and K, as well as fiber and iron. This means wasabi peas are great for dogs, right?

No type of pea is suitable for a dog with kidney issues. Not just that, but if your pup eats a large amount of them, he can experience stomach ache.

What About Wasabi Almonds? 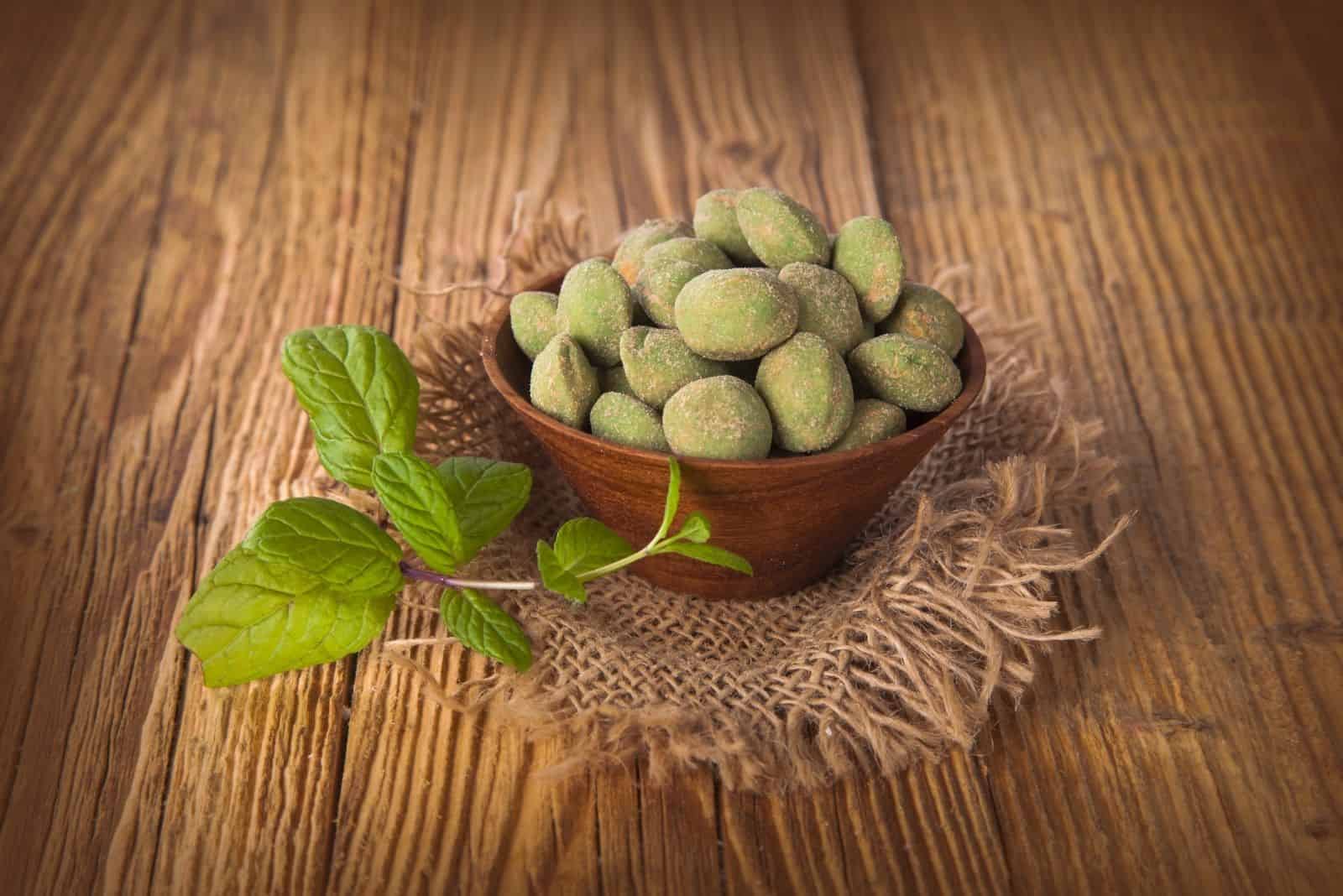 Once again, the answer is ‘no.’

While you know all about wasabi and dogs, almonds are also not good for your four-legged friend.

They aren’t toxic, but they can cause plenty of stomach issues.

Combine them with wasabi, and you get a mix your pooch will not be grateful for.

Watch Out For Fake Wasabi 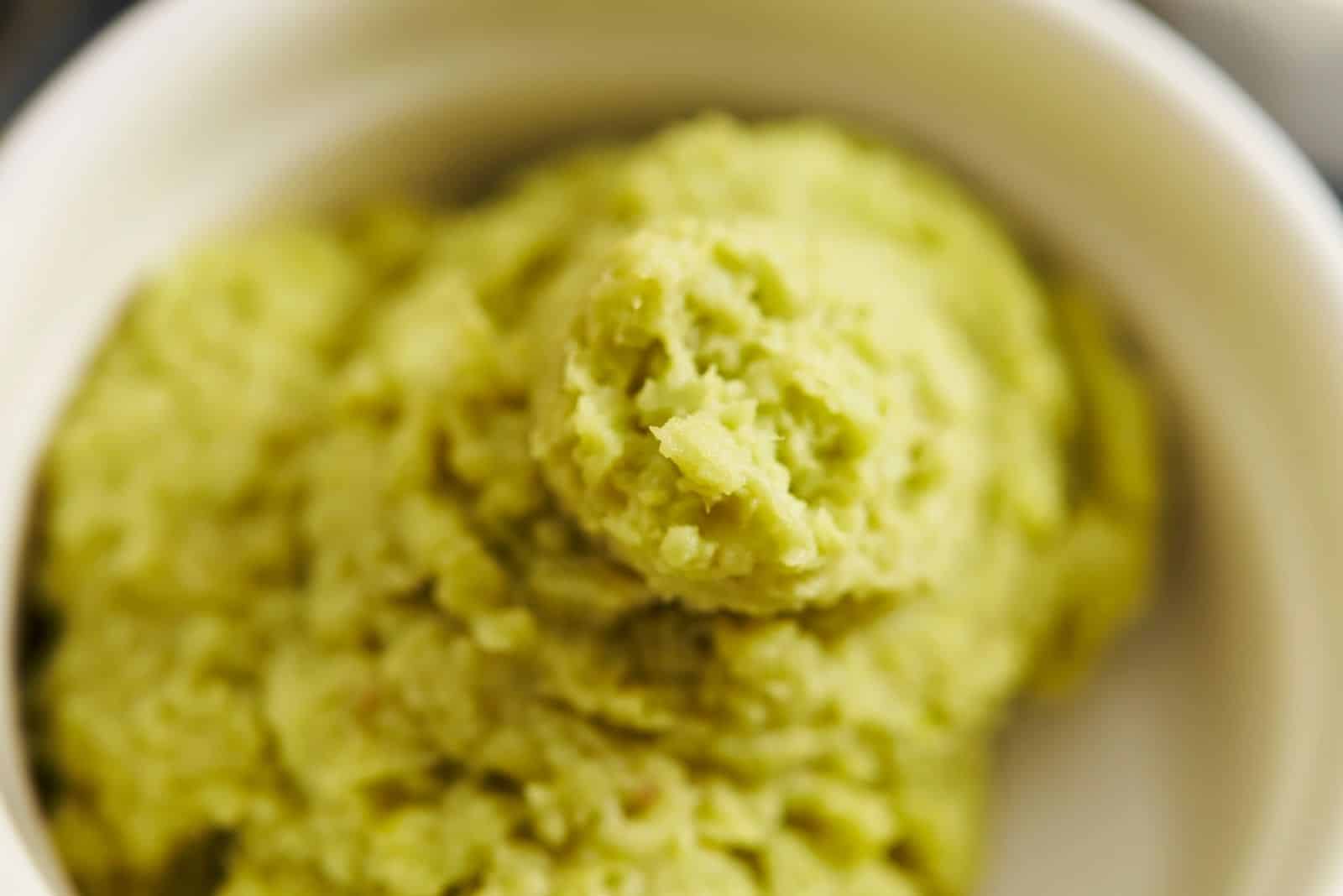 Believe it or not, most of the wasabi you can buy in the USA isn’t even real wasabi!

Instead, they sell a substitute that includes plenty of additives, chemicals, gluten, various kinds of mustard, and green dye.

Chances are you’ve been eating something that you think is wasabi while it really isn’t your entire life!

For you, this doesn’t change much. For your pooch, however, this can mean a lot of things.

If your dog ingests a large amount of fake wasabi, he might end up suffering from a lot of health issues.

Just to name one, your dog might experience an allergic reaction to gluten, something you didn’t even know he suffers from!

At the same time, fake wasabi includes many artificial ingredients such as citric acid and sorbitol.

While neither of those is necessarily toxic, they can cause digestive issues, and as a consequence, your dog might vomit or have diarrhea.

Also, some dogs have allergies to food dyes, so the green dye used in fake wasabi is another thing to be careful of. 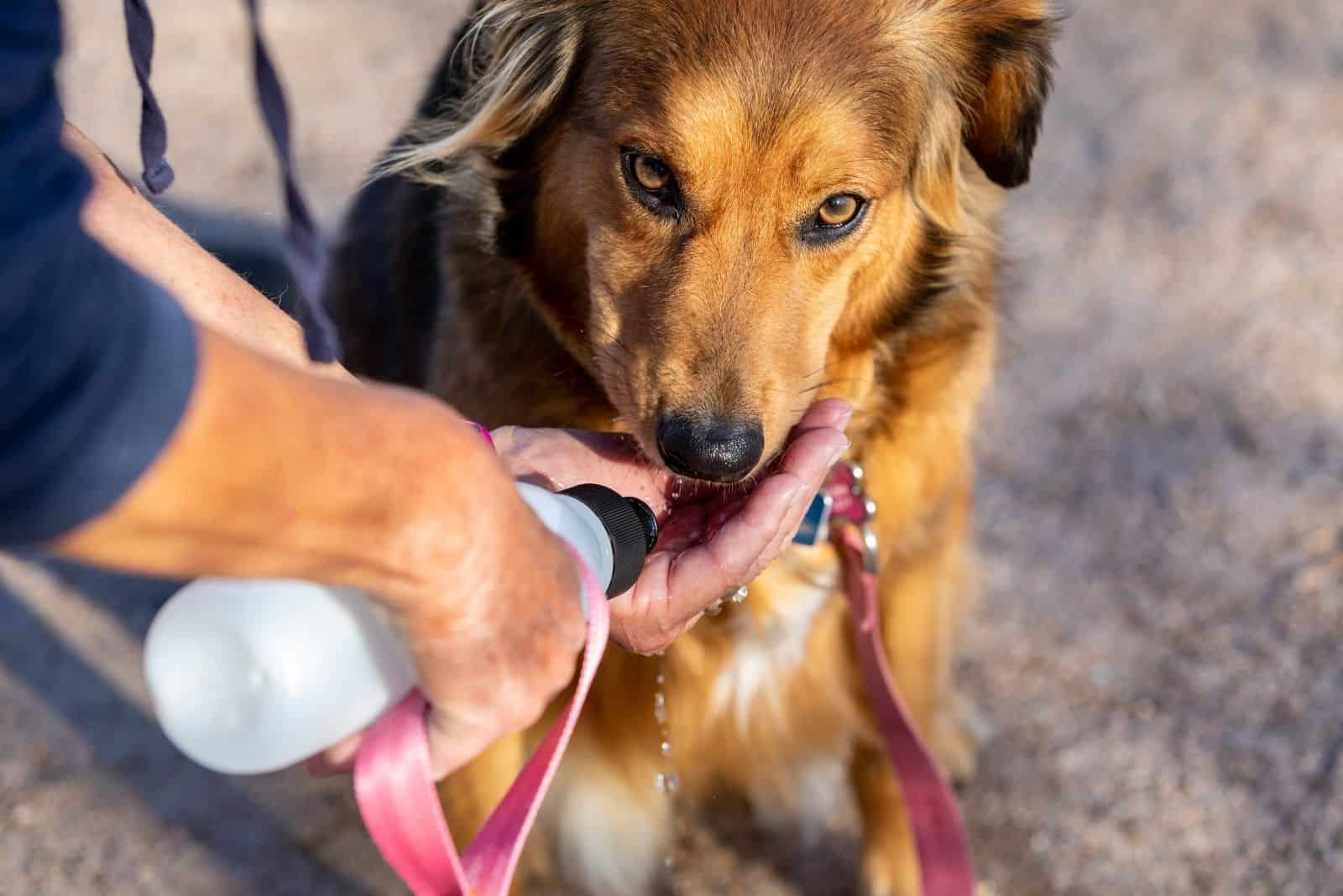 Chances are your dog will be just fine after eating a small amount of wasabi. Still, it’s better to be safe than sorry, so it would be wise to know what you can do to help.

First off, remove all wasabi leftovers from your pup’s reach and give them plenty of water.

Your dog will probably want to drink to rinse off the sour taste of wasabi, and it will make them thirsty.

Try washing out your dog’s mouth to help him get all the wasabi off his tongue.

Since wasabi isn’t poisonous to dogs, you don’t have to take your dog to the vet unless you notice any of the symptoms we’ve mentioned above.

Monitor his behavior for a few hours, just to make sure he’s okay.

Keep Wasabi Away From Your Pup

The best thing you can do for your dog is to keep wasabi out of his reach. If he can’t get ahold of it, he won’t eat it.

Dogs will do all they can to reach any form of food, especially when you leave them unsupervised.

Chances are your dog has already stolen some food from your table. In fact, canines are very good at this trick.

You should train your pet not to jump on tables or even chairs, for that matter. However, even the best-trained dogs will sometimes give in to the call of the wild.

Still, it would help if you do all you can to keep your wasabi stored away on high countertops.

If you have to leave in the middle of the meal, make sure your pooch follows you. And keeping leftovers on the table is a no-no.

And if, despite all of this, your Fido does take a bite of wasabi, don’t panic, but stay vigilant and look out for any side effects.

Remember, it’s always better to go to the vet for nothing, rather than missing the chance to help your pup in pain. 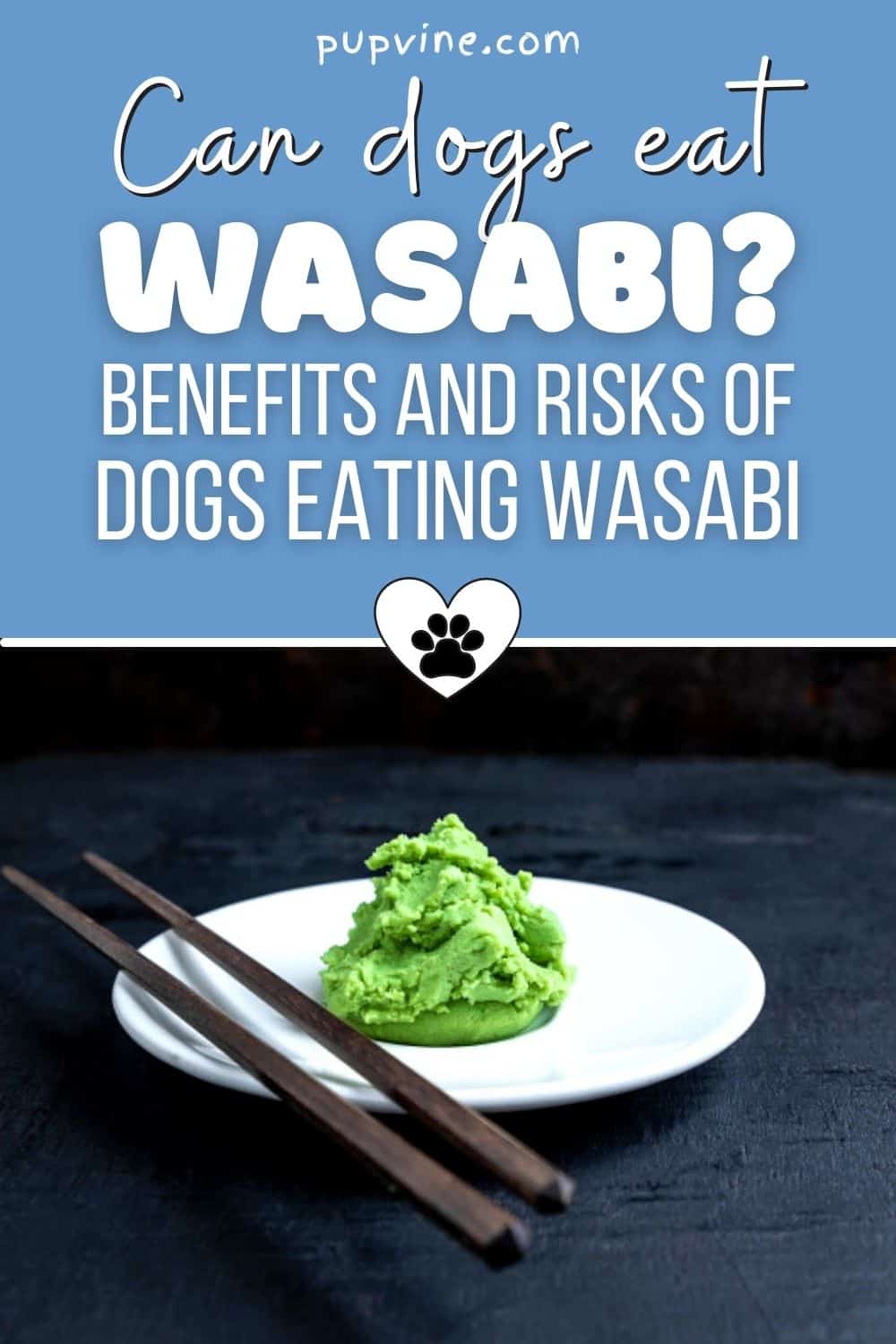 Labrador Feeding Chart: Feed Your Lab Like A Pro

Newfypoo: The Most Adorable Giant You'll Ever Meet

Pomeranians 101: All About The Breed And The Special Merle Pomeranian

[…] So, if you are eating sushi and you happen to have wasabi nearby, do not let your Shih Tzu dog eat wasabi! […]