Most dog owners wouldn’t even think about introducing brussels sprouts to their dog’s diet. Frankly, it’s a pretty underrated vegetable. Not even all humans like them!

However, one question is natural: Can dogs eat brussels sprouts?

Are brussels sprouts good for your dog?

This veggie comes from the cruciferous vegetable family, and to be honest, that surprised me a lot. I never thought those little green balls carry so many amazing nutrients!

Of course, I had to give my dog some to enrich its diet.

What do you think, did it work? Do our four-legged buddies like brussels sprouts, and how good are they? 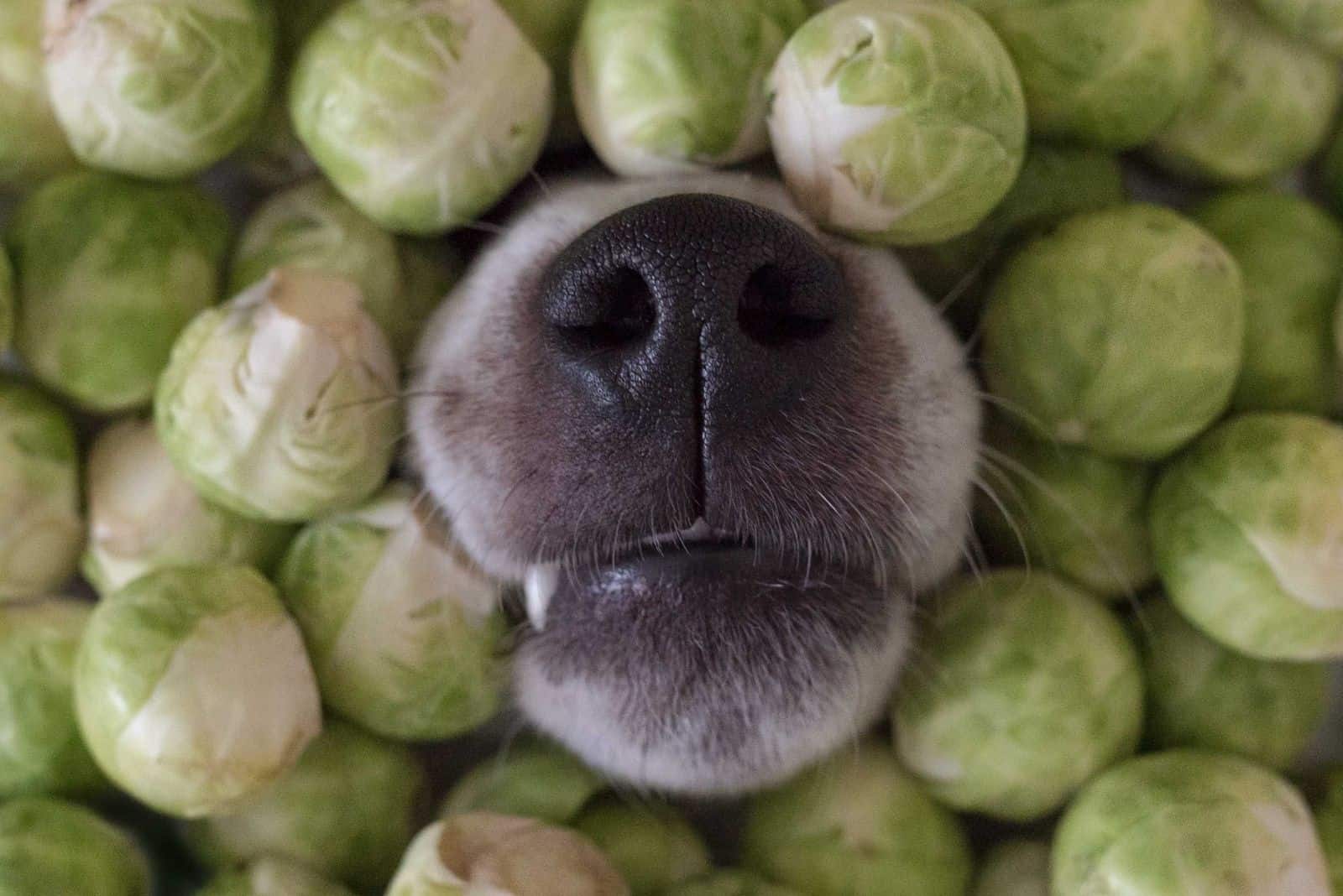 The short answer is YES, dogs can eat them.

These veggies that most of us dread are actually quite good and healthy.

Brussels sprouts are chests packed with all sorts of vitamins, minerals, and other goodies your dog can only benefit from.
If you want the longer answer as to whether dogs can eat brussels sprouts, stay tuned.

What Nutrients Can A Dog Find In Brussels Sprouts? 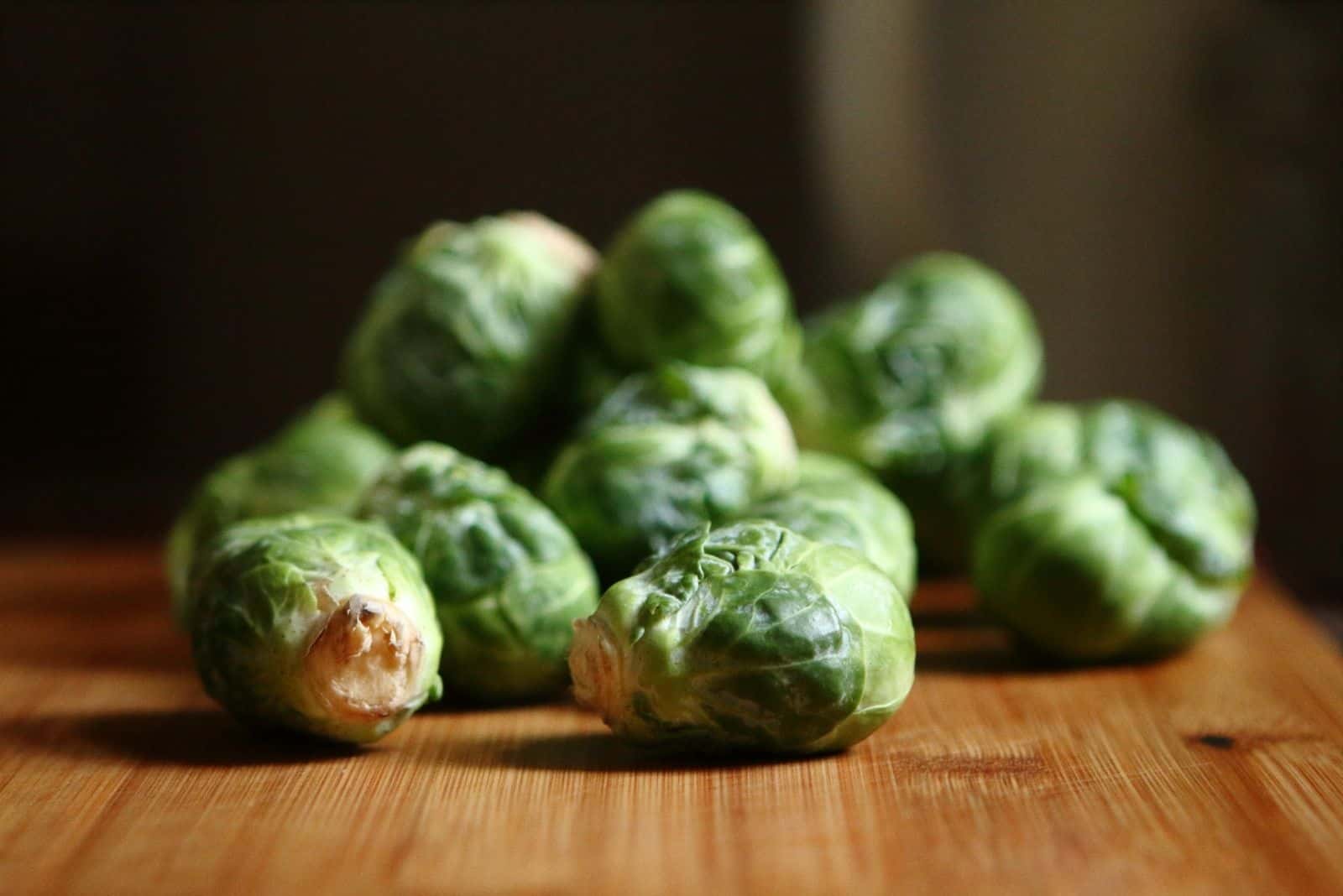 Brussels sprouts are truly an abundance of goodness. It would be good for us all if we ate these healthy veggies on a regular basis. Trust me, there are recipes and ways of preparing them that can make brussels sprouts quite yummy.

Personally, I find them just fine. I’m not impressed, but I know who is. My dogs! It started accidentally. I just got some fresh brussels sprouts for lunch, and when my dogs came into the kitchen, I immediately thought: Hey, I can give them to my dog! I wonder why dog experts say they’re so helpful?

A quick Google search and I found out that brussels sprouts are rich in antioxidants, vitamins C, B1, B6, A, E, K, kaempferol, potassium, folate, manganese, and dietary fibers.

Vitamin K is crucial in the earliest stage of a puppy’s life, but its importance doesn’t stop once the puppy grows up either. This vitamin makes sure that blood clotting is normal, and the heart is in good condition.

Vitamin C is an incredible immune system booster. However, it also benefits the dog’s cardiovascular system.

Vitamin A is focused on improving one’s vision, while vitamin B1 and Vitamin B6 make sure the pup’s brain is working like a clock and the blood cells are within the appropriate number.

Antioxidants are strong with this veggie. They are helpful because they curb free radicals. For example, if your dog has gone through some cell damage, antioxidants will help your pup recover faster. They reduce inflammation in the dog’s body and prevent further issues in this field.

It’s great for a veggie to contain kaempferol since it’s proven to be good for so many things.

Kaempferol works as an anti-inflammatory. It’s used to treat degenerative problems in a dog’s body, but it also stops chronic issues like cancer.

Regular consumption of brussels sprouts will stimulate good bowel movement. Your dog’s digestive system will be thankful for the many benefits of this veggie.

Are Brussels Sprouts Low In Calories? 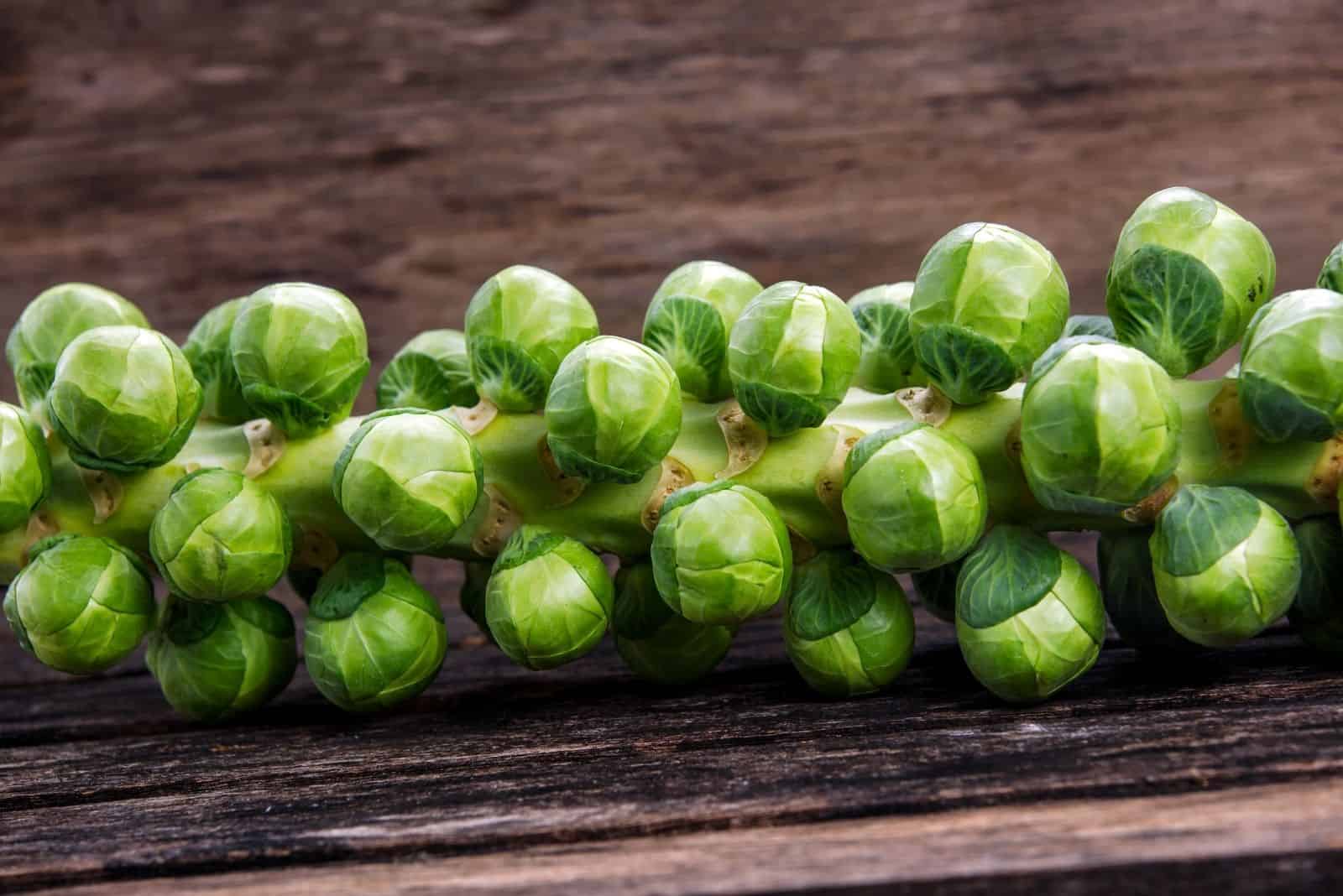 But, your dog can only eat a limited quantity a day, and that’s just one green ball of goodness. Having a full cup would be just too much!

Next time you decide to serve brussels sprouts to your dog, do so because they carry many nutritional goodies.

Tell Me About The Health Benefits Of This Veggie! 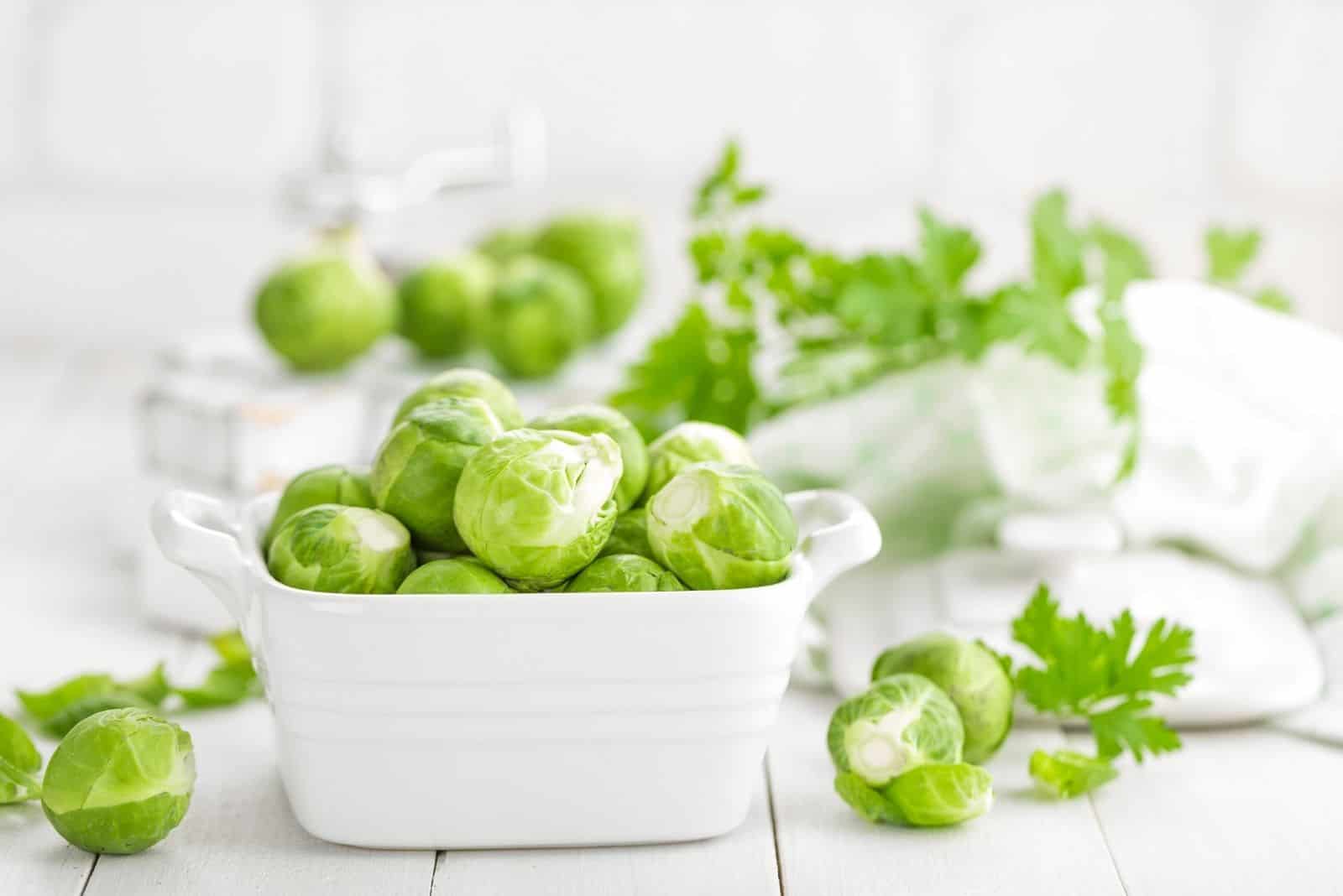 Brussels sprouts are known for their properties of controlling and reducing high blood sugar levels. This doesn’t mean you can feed your dog chocolate! Keep the dog’s diet balanced and introduce these sprouts every now and then. They won’t allow the blood sugar to jump way up high.

Thanks to a bunch of vitamins and minerals hiding inside brussels sprouts, these veggies support good bone health. Healthy bones are crucial for all dog breeds and sizes. The high amounts of calcium and potassium make sure that your puppy grows into a big and strong doggo.

Besides affecting the dog’s immune system, brussels sprouts reduce inflammation in the dog’s body and prevent further hotspots. Having a strong defense system is a must for all dogs; otherwise, chronic illnesses may knock on that doggy door.

Why Does My Dog Love Brussels Sprouts? 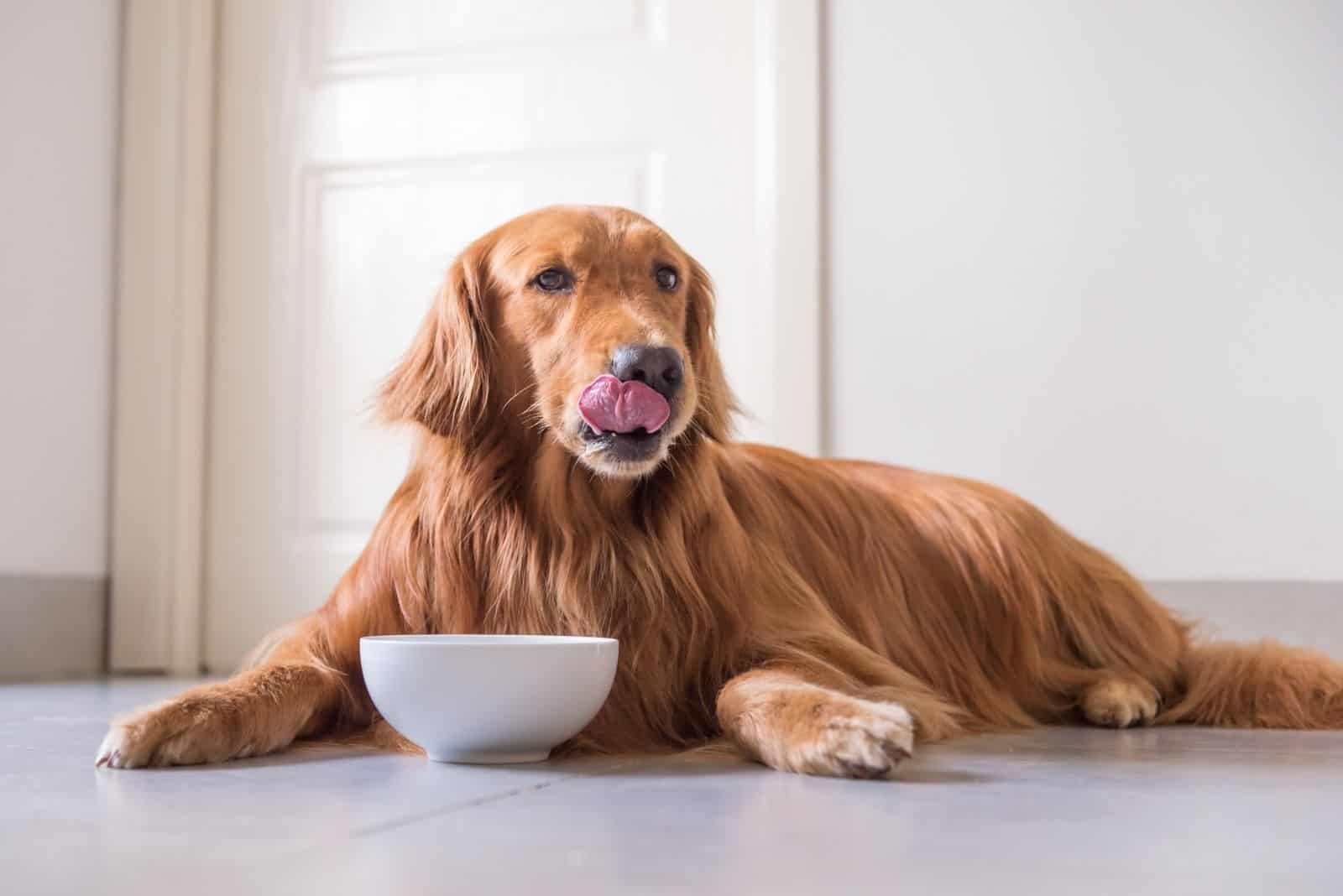 Dogs love many human foods, including veggies like edamame, artichokes, and peppers. These aren’t a normal part of any dog food, but they can be introduced in your dog’s diet carefully.

The same goes for brussels sprouts.

But, why do our furry friends like brussels sprouts so much? Surely, they can’t know the many nutritional benefits to their overall health! So, what’s with this obsession?

It’s the unique, sweet and nutty taste of brussels sprouts that makes our buddies like them.

However, no matter how delicious they are to your dog, large amounts aren’t recommended. Try to feed only a moderate amount of brussels sprouts, or else.

Keep on reading and you’ll find out. 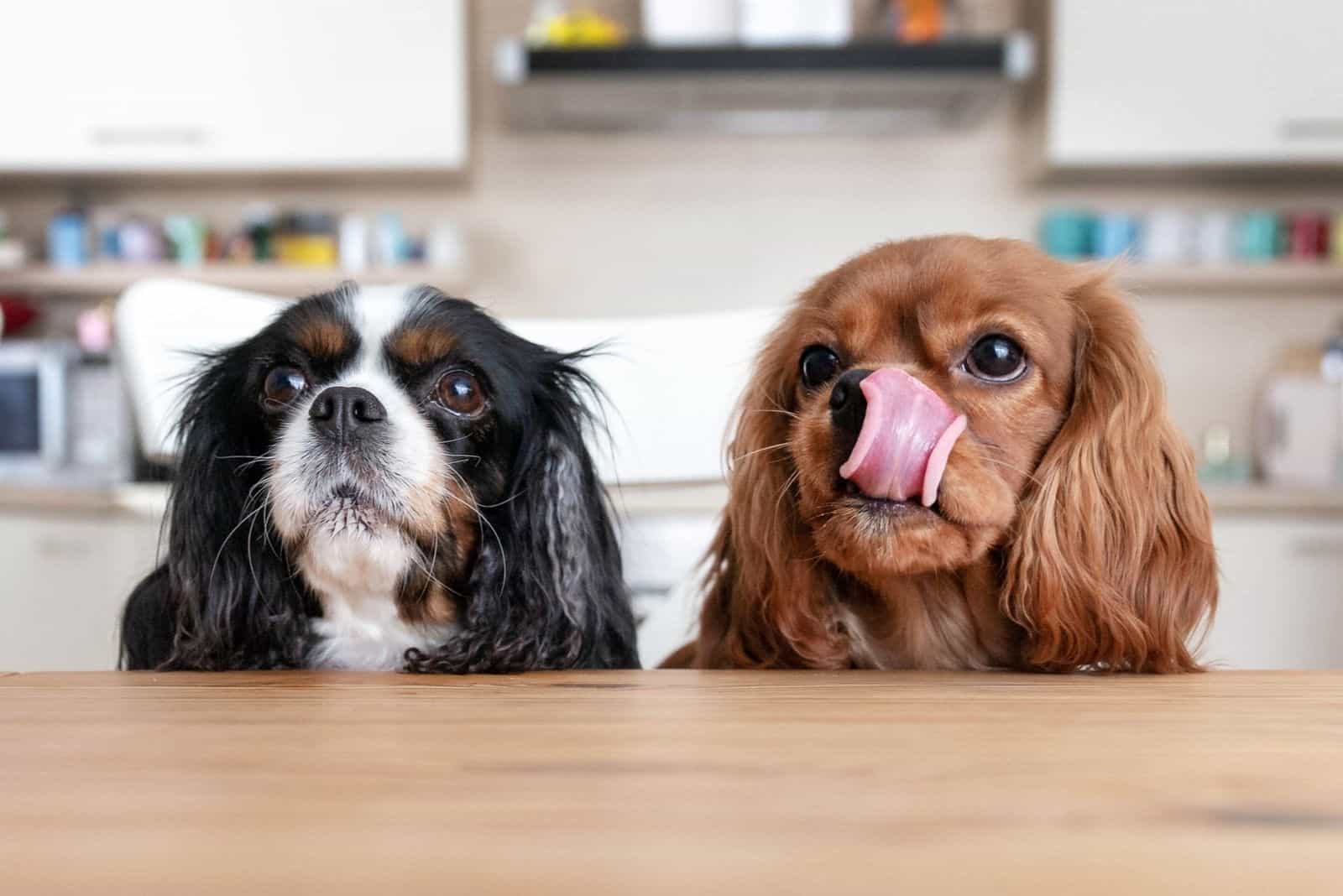 Even though brussels sprouts are very beneficial, they don’t come without some side effects.

What’s the first thing you notice about brussels sprouts?

Their round shape, of course!

Because of their shape, brussels sprouts, especially raw ones, are considered a choking hazard.

Never leave these veggies somewhere where your dog can grab and eat them. Swallowing raw brussels sprouts is the same as swallowing a little ball.

Brussels sprouts cause flatulence, or in other words, a lot of gas coming from your dog.

One of the biggest downsides of brussels sprouts is excessive flatulence.

Brussels sprouts are rich in isothiocyanate, which affects the production of excess bacteria. Those bacteria actually stimulate gas and make the dog fart.

Too many brussels sprouts mean too much isothiocyanate, and that means your dog will get an upset stomach, which may lead to diarrhea.

Brussels sprouts should be prepared and cooked thoroughly before giving them to your dog. Cooking doesn’t reduce the amount of essential vitamins hiding in this veggie. The nutritional value of brussels sprouts stays the same, only flavor is added.

If I have to choose one method of preparing brussels sprouts for dogs, that would be steaming since it preserves the sprout in its original value.

You can serve brussels sprouts as a treat, but I recommend you mash them and add them to your dog’s meal, along with other goodies. For example, bacon pieces go incredibly well with brussels sprouts. Your dog will appreciate this delicious meal.

Should I Feed Raw Brussels Sprouts To My Pups? 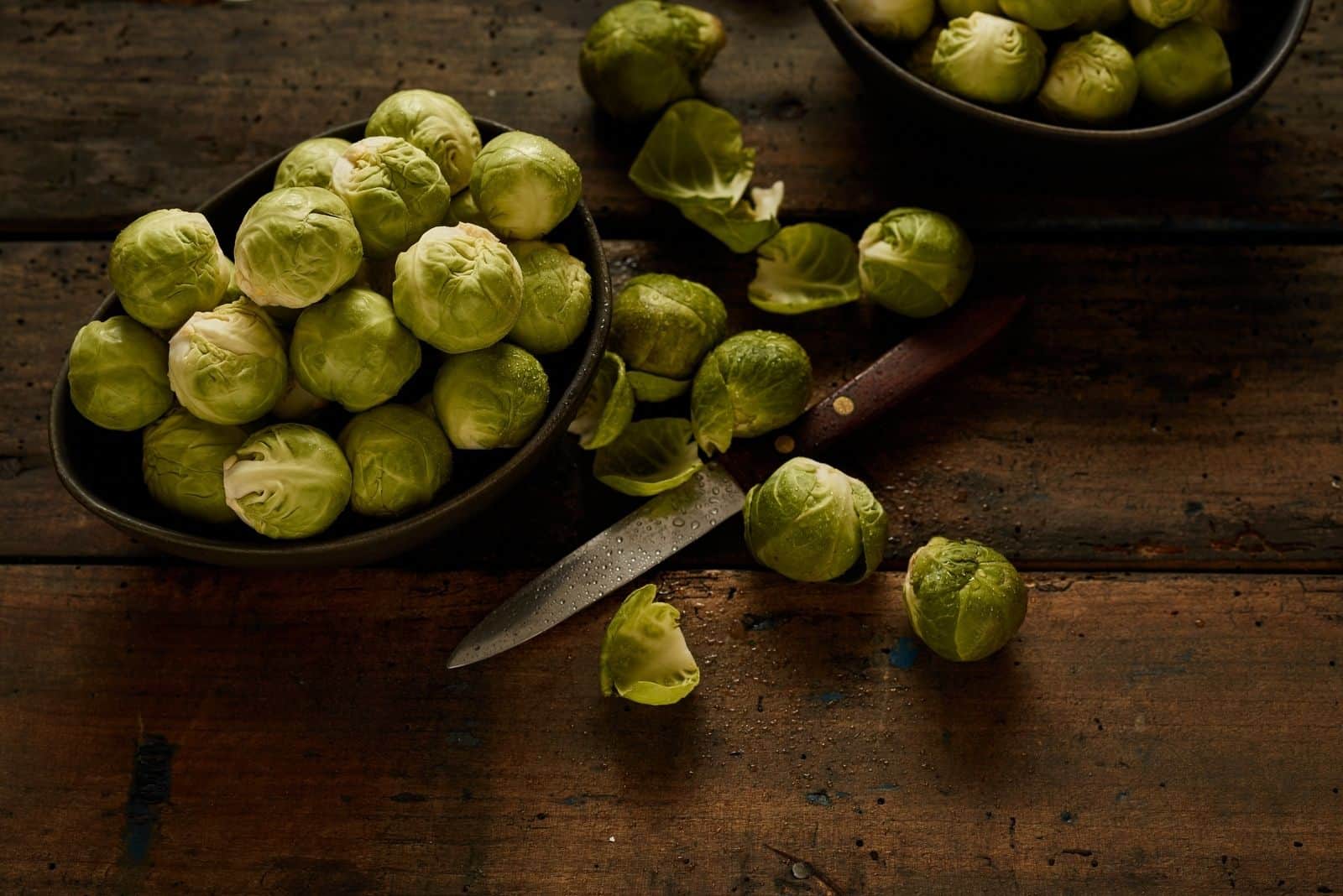 I would never say give raw brussels sprouts to your pups.

Mine wouldn’t eat them raw, and I found out that was actually a good thing.

Eating these veggies raw could induce serious problems with the dog’s digestive tract. Your dog’s stomach will become sensitive, and it may result in excessive diarrhea, vomiting, and even food poisoning.

Anything consumed raw from this plant is a potential threat to your dog’s health.

In addition, I bet cooked brussels sprouts (without seasoning) are much tastier than raw ones.

So, what do you say? Can dogs eat brussels sprouts?

If you watched carefully during our little dog food class, you will be sure that the answer to our question of the day is positive.

It’s a YES for doggos to eat brussels sprouts!

The better question is: In which form should dogs eat brussels sprouts?

Remember, raw sprouts are strictly off limits. Well, unless you want to risk terrible stomach issues for your dog.

Have the brussels sprouts steamed or cooked, and combine them with the rest of your dog’s meal.

This veggie can’t make a complete meal for your dog. Think of them as a supplement you can give occasionally, around two times a week. Anything over that could cause further complications.

Brussels sprouts aren’t my favorite veggie. I’m sure that the vast majority of you don’t like them either. But, that shouldn’t stop us from buying freshly picked sprouts and preparing them for our canine pals.

If you really have to give food off your plate to your dog, it’s always better for that food to be brussels sprouts rather than processed foods like spam or sausages, or even spicy meals. 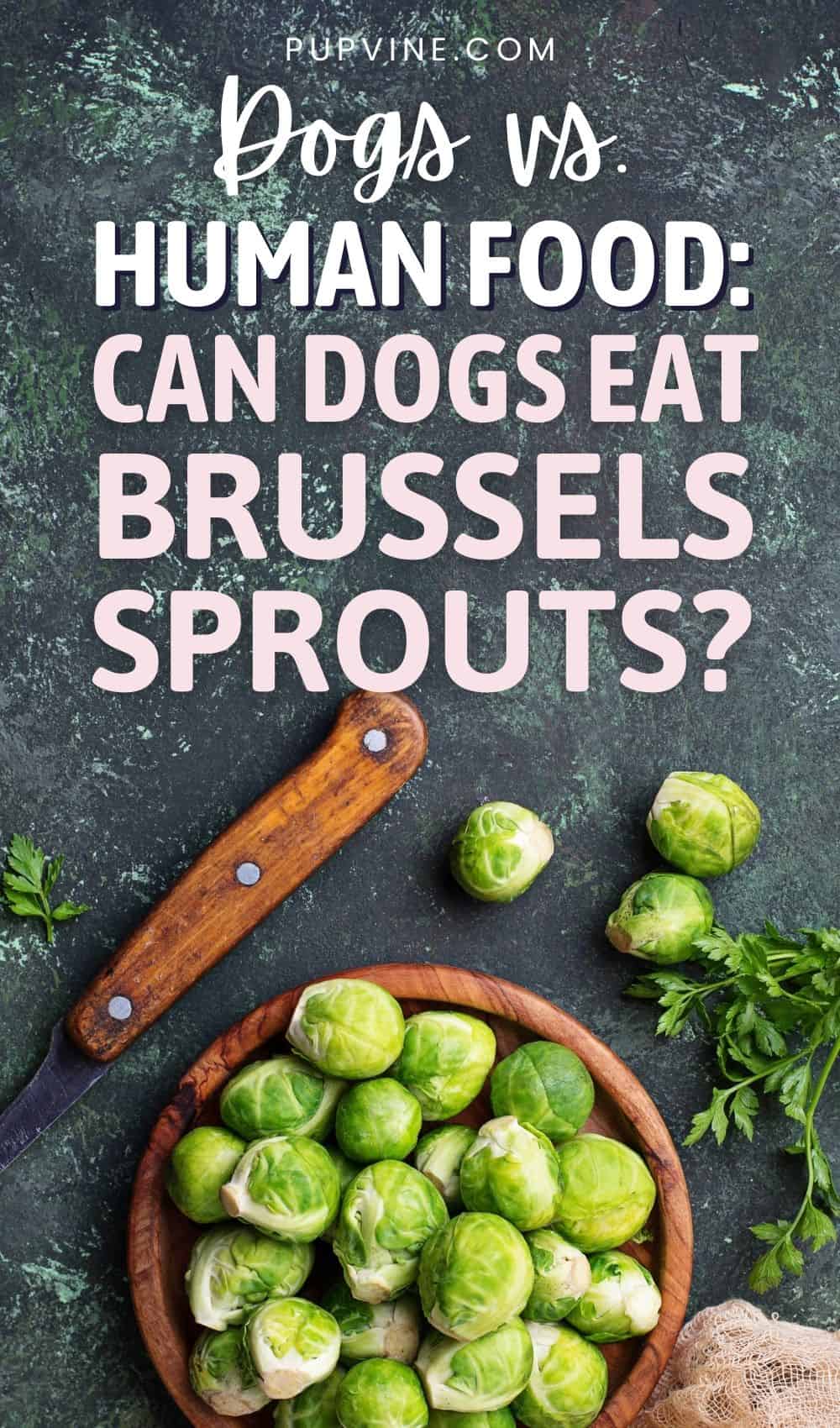 Why Do French Bulldogs Fart So Much? 21 Reasons Why Frenchies Let It Rip

Shih Poo Growth Chart For The Toy And Standard Size

[…] can always add some green beans or brussels sprouts to your dog’s diet for some fresh vitamins. However, avoid onions, mushrooms, and […]

White Labrador Retrievers – The Secret Behind Their Color

[…] healthy alternatives from your kitchen. Instead of typical treats, try using carrots, paprikas, or Brussels sprouts. Your Labs might love […]

The Irish Wolfhound Feeding Chart: Diet For The Tallest Dog

[…] dog’s diet to prevent bloat. These supplements can be natural, for example, vegetables like brussels sprouts, sweet potatoes, carrots, […]