Whether they’re red, orange, yellow, or green, cooked or eaten raw, bell peppers are a versatile, nutritious, and tasty addition to our diet. We chop them to make salads, scatter them on pizza, stuff them and roast them in the oven, and make soup out of them. They are versatile, packed with goodness and flavor, and have become popular worldwide.

Known variously as capsicum, bell pepper, sweet pepper, or just plain old pepper (depending on your location), this humble vegetable has gone a long way from its origins in Central and South America to reach right around the world, influencing cuisines everywhere.

We know that they are good for us, but are they safe for our canine friends? When we are slicing up a juicy red bell pepper and help ourselves to a piece, should we toss some to our pooch as they wait in anticipation?

It’s an age-old problem that faces dog owners – is this ‘human food’ safe for my dog to eat?

In this case, we are asking, ‘can dogs eat bell peppers?’

We’ll reveal the answer below, along with some other helpful information.

Contents show
1 The Health Benefits Of Bell Peppers
2 Are Bell Peppers Related To Spicy Peppers?
3 Are There Any Other Hazards To Watch Out For?
3.1 Choose red bell peppers over green
3.2 Paprika
3.3 Be careful about how you cook them!
3.4 Vitamin K toxicity
4 In Summary

The Health Benefits Of Bell Peppers 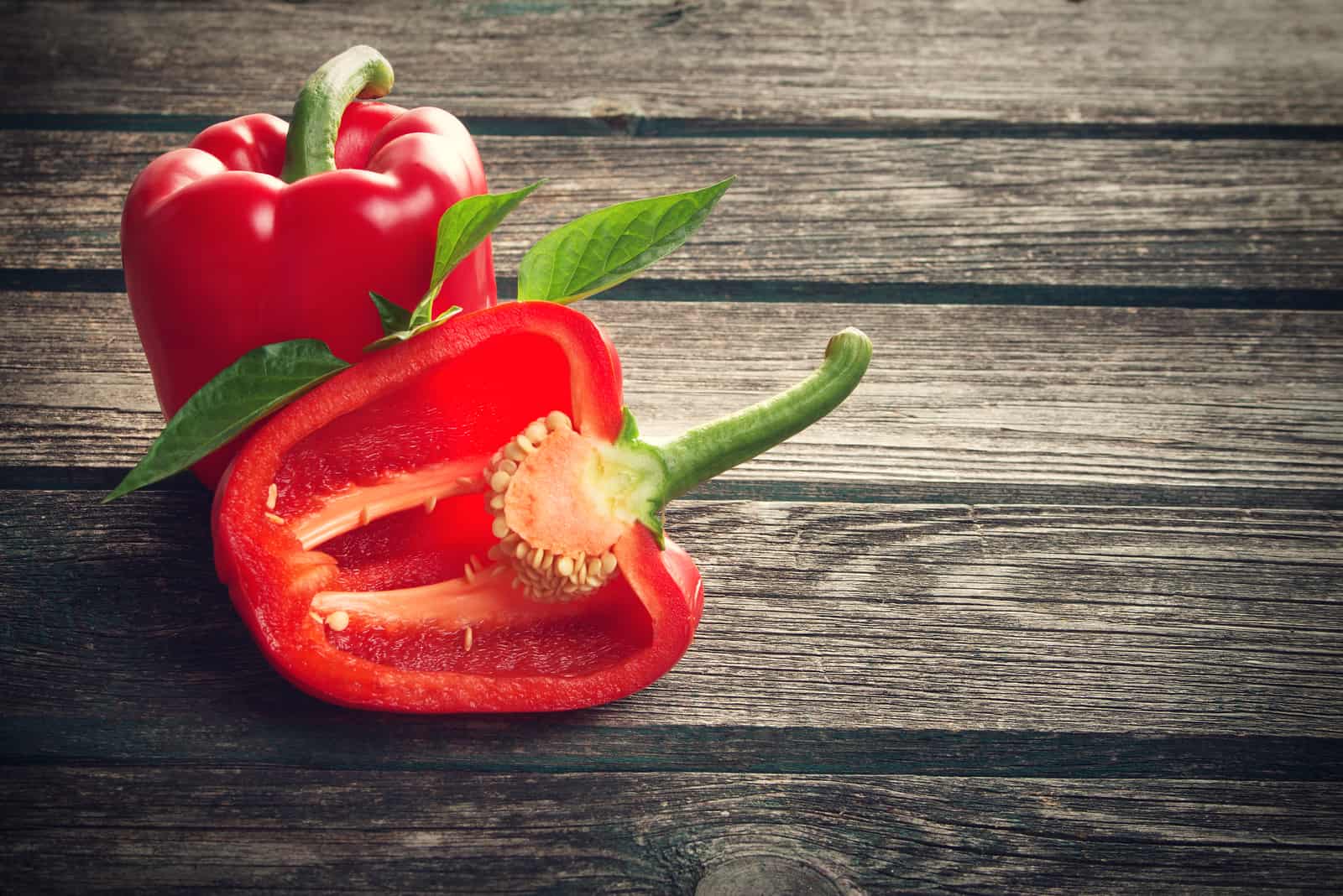 Before we begin, we’ll look at why peppers come in different colors. You might already know this, but the main reason for the color difference is that the pepper has been harvested earlier or later in the growing process.

Green peppers are essentially unripe, gradually turning yellow, through orange, and finally to red when they are fully ripened.

This is important when it comes to nutrition, as the riper the fruit (yes, bell peppers are a fruit!), the more nutritious they are.

You can find green peppers (and even purple ones) that don’t change color as they ripen, but these are a completely different variety and not widely available.

Most people will be familiar with the fact that green peppers are bitter in flavor, with yellow and orange gradually becoming sweeter and the ripe red bell peppers being the sweetest. This is all down to the natural sugars that form as the fruit ripens. Green peppers are bitter because the sugars have not had time to develop, and although they are healthy, they will not have the same nutritional value as the other riper fruits.

Let’s take a look inside bell peppers to see what goodness we can find:

• Vitamin A – carotenoids (including beta carotene, lutein, and lycopene) in peppers contain this essential vitamin that supports bone growth, vision, healthy muscles, skin, and nervous system. It also boosts reproductive system health and is vital to pregnant dogs for the development of their pups.

• Vitamin B6 – promotes a healthy brain and nervous system, boosts the immune system and skin health, and regulates hormone levels and cell production. It also plays a role in making hemoglobin for red blood cells and helps the body absorb energy from food.

• Vitamin C – a powerful antioxidant that boosts the immune system by attacking free radicals. These particles can accumulate in the body and cause chronic disease. Vitamin C breaks these down and destroys them. It can also protect against heart problems and prevent iron deficiency. One single red bell pepper can provide as much as 169% of the recommended daily intake of vitamin C!

• Vitamin E – another antioxidant that protects against free radicals. The damage they cause is similar to how your car starts to rust. Free radicals attack your cells in the process of oxidation, causing them to age quickly and break down, which opens the way for cancer and disease. Vitamin E destroys these particles before they can cause permanent damage.

• Vitamin K – this is needed to make prothrombin, a protein that causes blood to clot. Without this, wounds don’t stop bleeding. It also has a role in bone metabolism.

• Folate – a B vitamin that is essential for making red and white blood cells in the bone marrow. It also plays a part in DNA and RNA production, as well as converting carbohydrates into energy. It is essential during pregnancy, infancy, and adolescence.

• Magnesium – important for regulating blood sugar levels, nerve function, and blood pressure. It helps with the process of making DNA, bone, and protein.

Bell peppers are mostly water (around 92%) and carbohydrates, most of which are made up of natural sugars such as glucose and fructose. They are also a low-calorie food and a pretty good source of fiber!

It’s all looking good so far, with no red flags when it comes to including peppers in your dog’s diet. Let’s continue our journey to see if there are any hidden hazards. 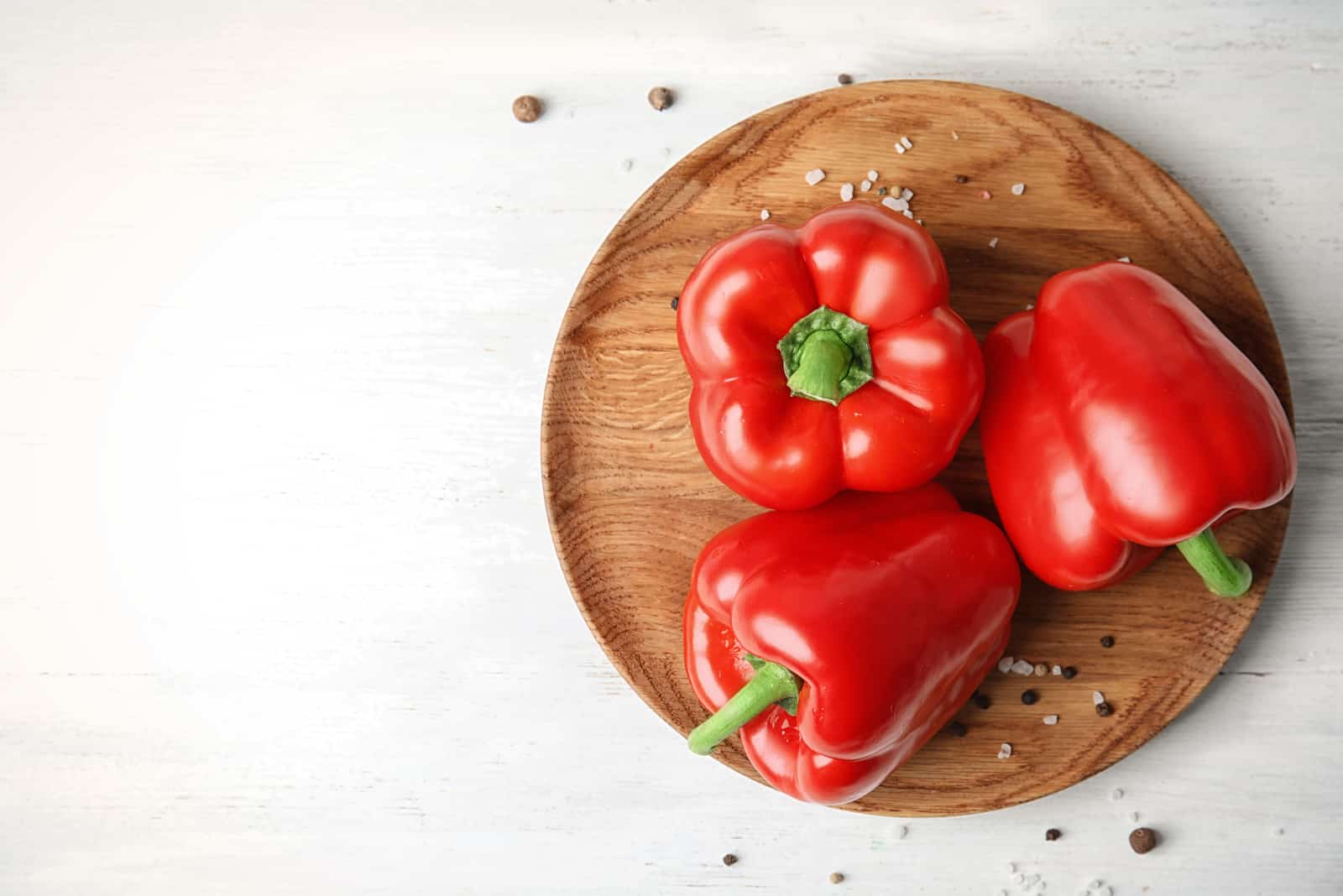 Before you throw your hands up in horror at the thought that you’ve been eating a relative of deadly nightshade, it might be of comfort to know that eggplant, tomatoes, and potatoes are also distant cousins.

What’s more important to keep in mind is that chili peppers, such as jalapenos, produce a chemical called capsaicin. This is where this family of veggies gets the name capsicum from. Capsaicin is an irritant that reacts with the mucus membrane to cause a burning sensation.

The spiciness of hot peppers is measured on the Scoville scale, starting from zero and going as high as three million or more.

It is never a good idea to give hot peppers to dogs as it will result in stomach upset as well as causing them pain and discomfort. Many breeds, especially small dogs, are extremely sensitive to capsaicin and will react badly, with vomiting and diarrhea being the most likely result.

Also, because of the discomfort and burning sensation, they will probably drink a lot of water, which could lead to bloating. This can be dangerous, and even fatal, to dogs.

The good news is that bell peppers, even though a part of the capsicum family, do not produce capsaicin. They are not spicy, ranking as ‘zero’ on the Scoville scale, and are therefore safe for your pooch’s tummy.

Are There Any Other Hazards To Watch Out For? 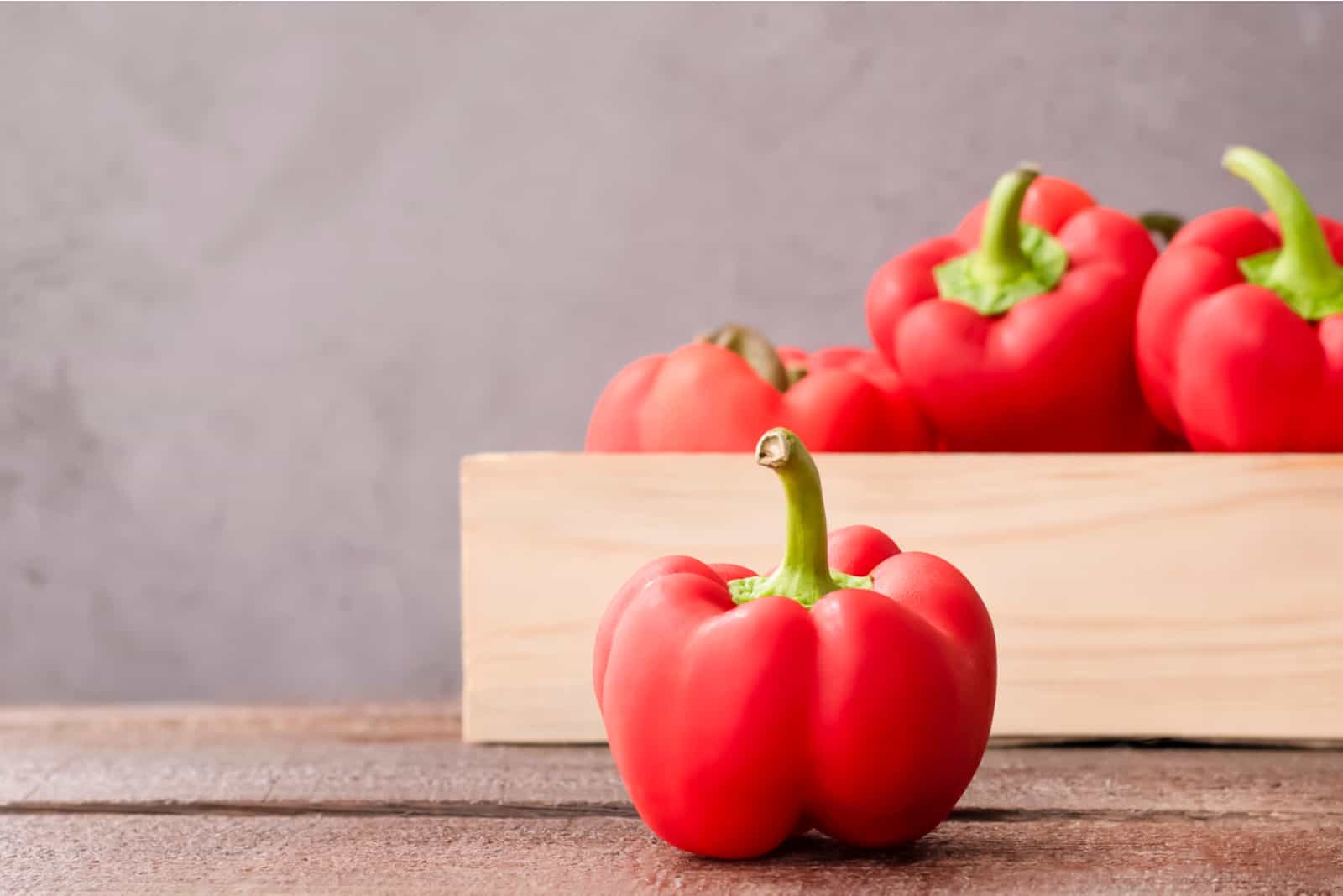 The health benefits of bell peppers are plain to see, and there is no reason why your dog should miss out.

However, here are a few pieces of advice that might help you avoid any problems:

They are not only sweeter and more palatable, but they also contain more nutrition and will be easier to digest. Green peppers are bitter and hard to digest, which is a common cause of indigestion that you may have experienced.

Most of us are familiar with this useful and versatile cooking spice, but not everyone knows it is made from ground red bell peppers. This might lead you to believe that it’s safe to include in your dog’s food, which is a reasonable assumption. The trouble is, not all brands are the same, and some even include chili powder in the mixture. Also, a powdered spice is more concentrated, making the effects much stronger and possibly causing stomach upset.

Be careful about how you cook them!

Raw red pepper is absolutely fine to give to your dog. Your furry friend will probably enjoy the crunch along with the sweet flavor. Raw vegetables are generally better for you as the cooking process can destroy the nutrients.

However, bell peppers are one of those cool veggies that can be cooked without the goodness being damaged! In fact, as the skin can be tough and difficult to digest, cooking them will help break down the fibers, making it easier on the digestive system.

The cooking process does matter, though. Dogs should never be given fried foods because of the risk of pancreatitis. You shouldn’t add salt or spices, as this could also have a negative effect on your dog’s health. Salt can be particularly problematic, potentially causing sodium poisoning and dehydration.

Raw, roasted, or grilled peppers are suitable, giving your dog all the benefits of this healthy vegetable. You can even puree bell peppers and add them to regular dog food.

Finally, if you do cook them, don’t add other veggies such as onion or garlic as these can cause serious health problems! Onions and garlic, along with all members of the allium family, are toxic to dogs and should always be avoided. According to some experts, a half-teaspoon of fresh garlic, finely chopped and added to dog food once a week, can be beneficial. However, the size of the dog will be a factor as large dogs will be able to absorb this easily.

It’s always a good idea to consult your veterinarian before including fresh garlic in your dog’s diet.

Keep an eye on their vitamin K levels. It’s unlikely that eating peppers will cause an excess amount of vitamin K in your dog’s system, but if they are eating other foods that contain high levels, then it could accumulate. It is a rare condition, but too much of this vitamin can cause anemia due to jaundice and blood cells rupturing. 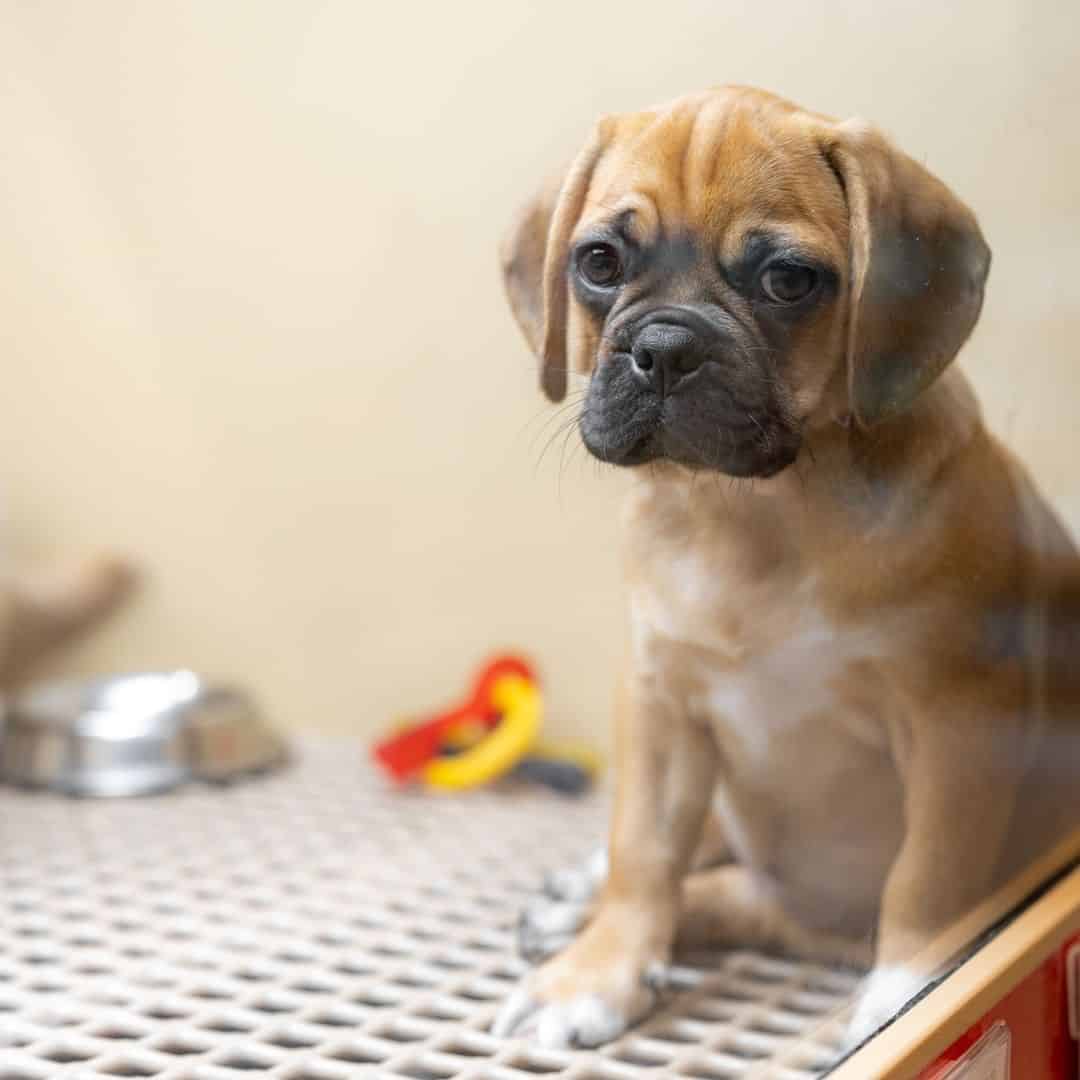 Generally speaking, because dogs are omnivores and not carnivores, they can safely eat a whole range of vegetables, including bell peppers.

However, there are exceptions to this rule, and it is always a good idea to check out any food before feeding it to your dog.

A diet of high-quality dog food, including canned food or kibble, should provide everything they need in terms of fiber, protein, vitamins, fats, carbohydrates, and fatty acids. Even so, there’s no reason why you shouldn’t supplement their diet with extra vitamins from a handful of peppers now and again.

Remember, red bell peppers are the healthiest choice and should be served raw, pureed, roasted, or grilled, without seasoning and definitely without garlic and onions. They should never be fried, and you should not include hot peppers such as cayenne or jalapeno as these will make your dog ill.

Always introduce new foods to your dog gradually and in small amounts just in case they don’t take to it. There are no guarantees that they are going to like it, after all. If they refuse it, then don’t force it on them. Just give them their usual food and investigate other treats instead. Dogs can be fussy, as you probably know!

Eating too much pepper won’t cause any lasting harm, but how much is too much? As a general rule, most vets recommend that for large dogs, the limit is no more than half a bell pepper a day, and smaller dogs should eat less than a quarter a day.

Stick to these guidelines, and you’ll have a happy pooch, which is what it’s all about. 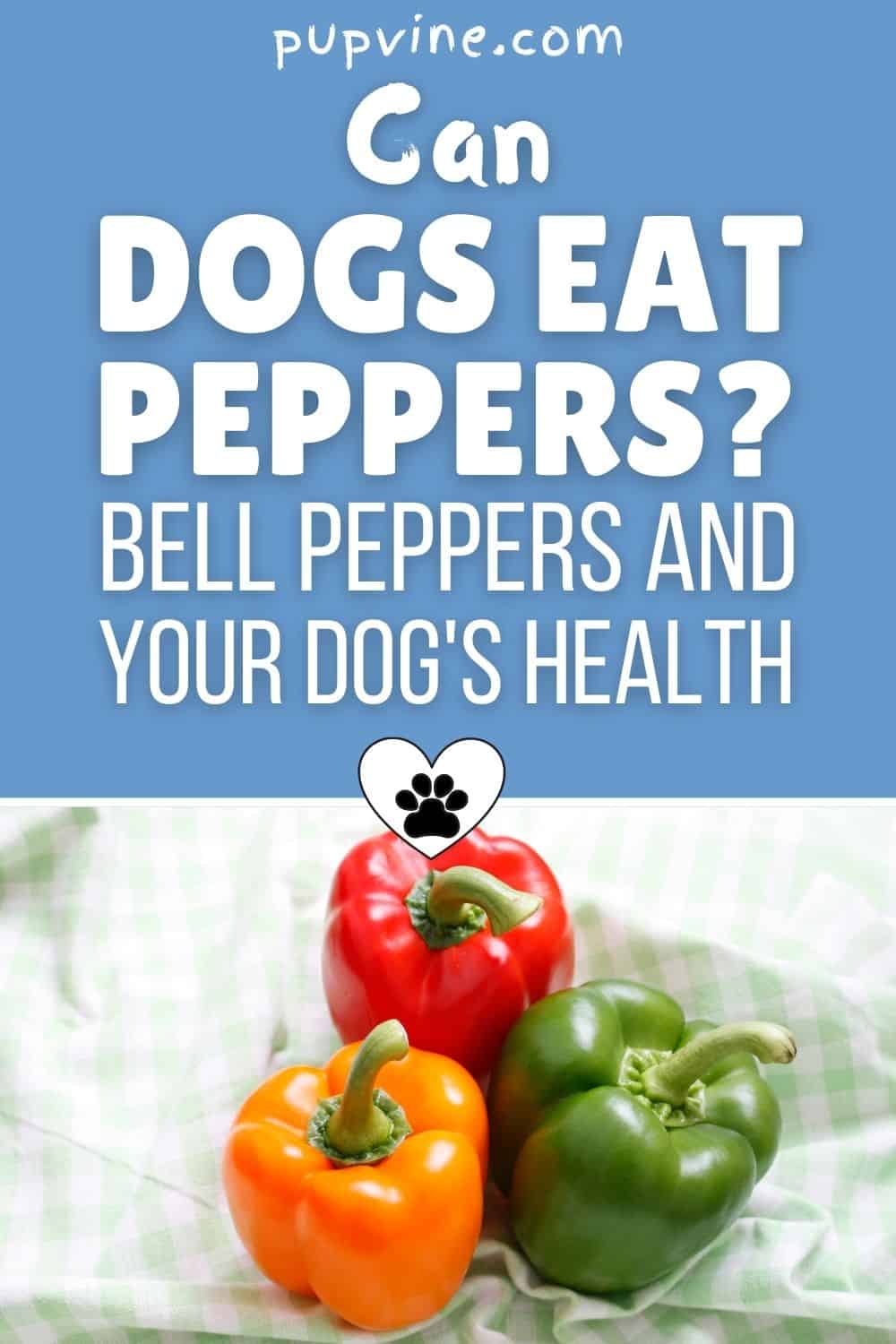 Basset Hound Pitbull Mix: Get To Know This Rare Hybrid

[…] some human foods such as anything spicy can be harmful for your pet. However, tuna, fish sticks, or peppers, can be very beneficial for your four-legged […]

How Much Do Chihuahuas Cost? Puppy Price And Expenses

[…] many healthy treats you can give your pup that you probably already have in your kitchen, such as peppers, fig newtons, tuna, and paprika. This can help you save a bit on the cost and ensure you have a […]

Best Husky Raw Diet: Going Back To The Roots

Is Salsa Bad For Dogs? The Hidden Dangers In Human Food