Is the world as colorful for our canine friends as it is for us? How do dogs perceive colors and why? If you have ever been bothered by these questions, you’ve come to the right place to get answers.

Dogs may not have the ability to differentiate colors like we do, but their world is not as dull as some believe.

You shouldn’t feel bad that your pup is missing out on some interesting colors because their other senses are extremely well-developed. Their sense of smell is 10,000 to 100,000 times better than ours, and they can hear sounds at much higher frequencies, up to 45,000 Hz.

Contents show
1 Why do we see colors?
2 Are dogs colorblind?
3 What colors can dogs see?
4 How do we know what colors dogs see?
5 Why do dogs see the way they do?
6 Dog vision vs. human vision

Why do we see colors? 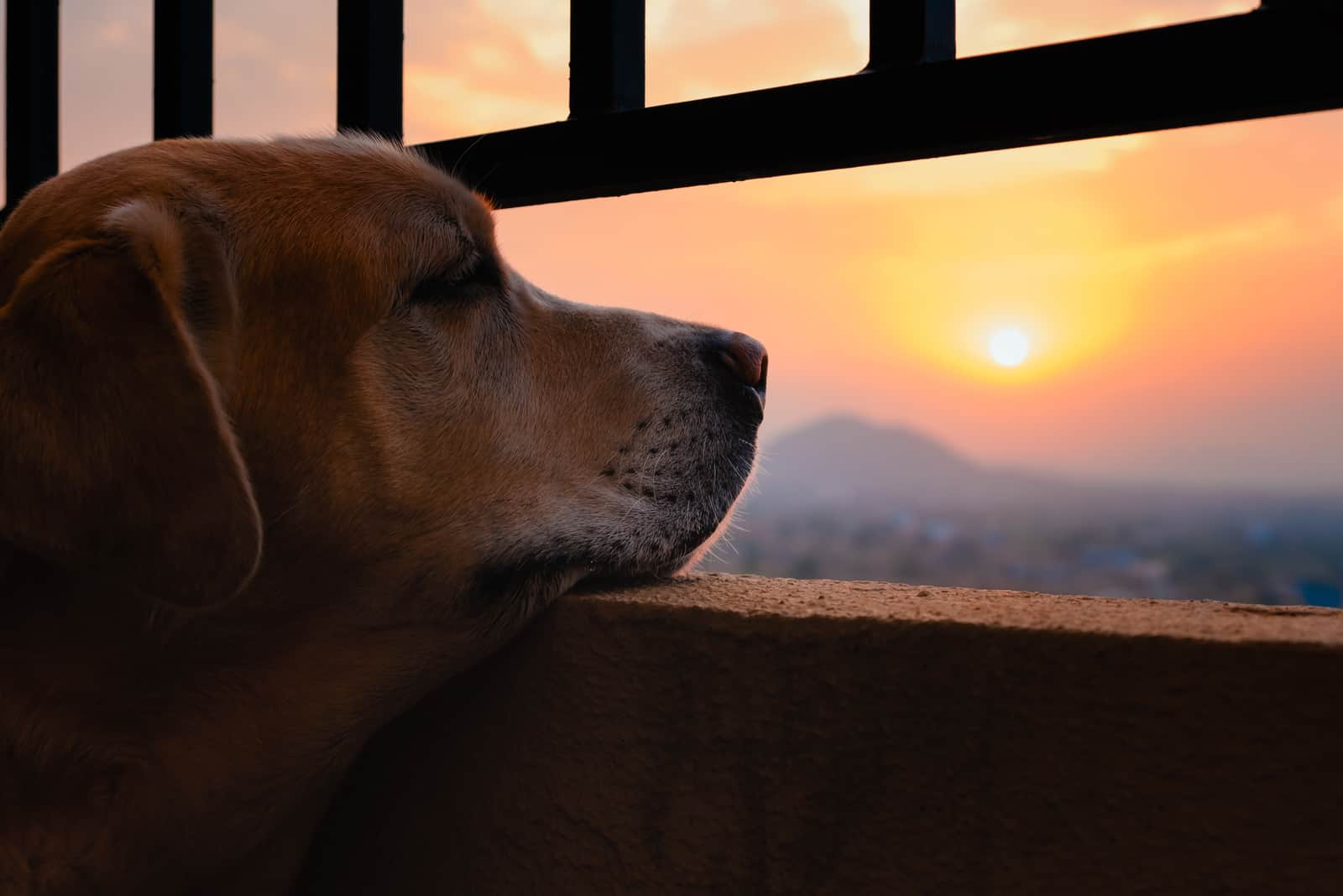 When light hits an object, a portion of it is reflected while the rest is absorbed. Different objects reflect different wavelengths of light, which then travel into our eyes, where it will be processed and perceived as color.

The colors an animal can see depends on how their eyes work and how the brain processes the information sent to it.

The range of colors we are able to perceive is determined by the photoreceptors in the retina, a thin inner layer at the back of the eye. There are two types of photoreceptors: rods and cones.

Rods allow us to see in low light, while the cones make color vision possible.

Each cone is stimulated by either long, medium, or short wavelengths of light. That means they can be sensitive to red, blue, or green light. 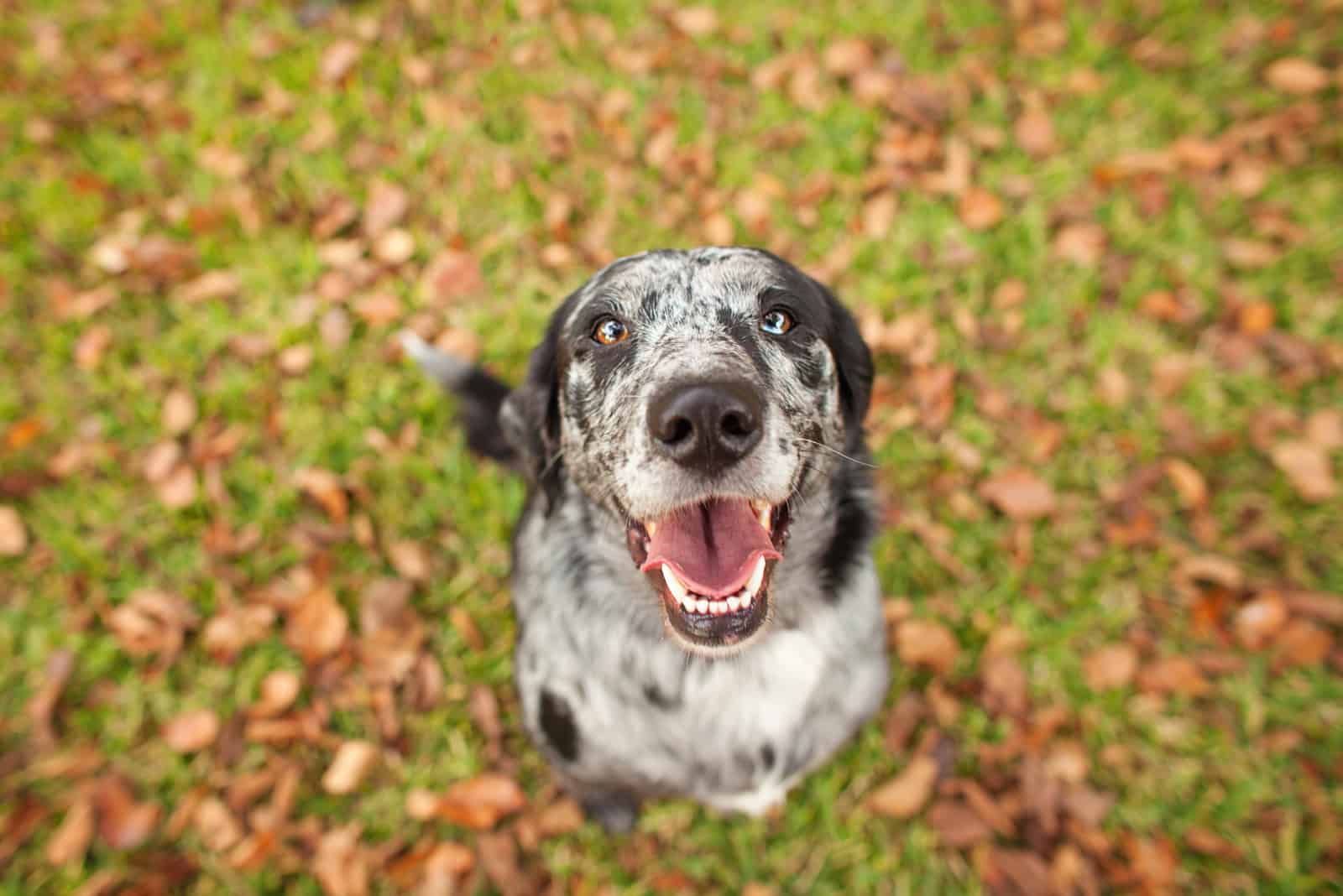 Due to the lack of red cones, dogs can’t distinguish between the shades of red and orange, which does make them colorblind.

Colorblindness is a vision deficiency that occurs when one type of color receptors is missing from the retina. Dogs are dichromatic, meaning they only have two types of cone cells, blue and green.

There are different types of color blindness:

The first type, defined by the absence of red cones, is the one that dogs have. Deuteranopia, on the other hand, is characterized by the lack of green cones.

These two conditions are commonly referred to as ”red-green color blindness,” which is the most common type in humans. Therefore, people who suffer from it know a bit about what the world looks like through a dog’s eyes.

The opposite is tritanopia, also called ”yellow-blue color-blindness,” which makes it impossible to distinguish between yellows and blues.

A popular misconception that a dog’s vision is black and white might be due to the existence of achromatopsia, a rare condition where two or all three cone types are missing, thus severely limiting color perception.

What colors can dogs see? 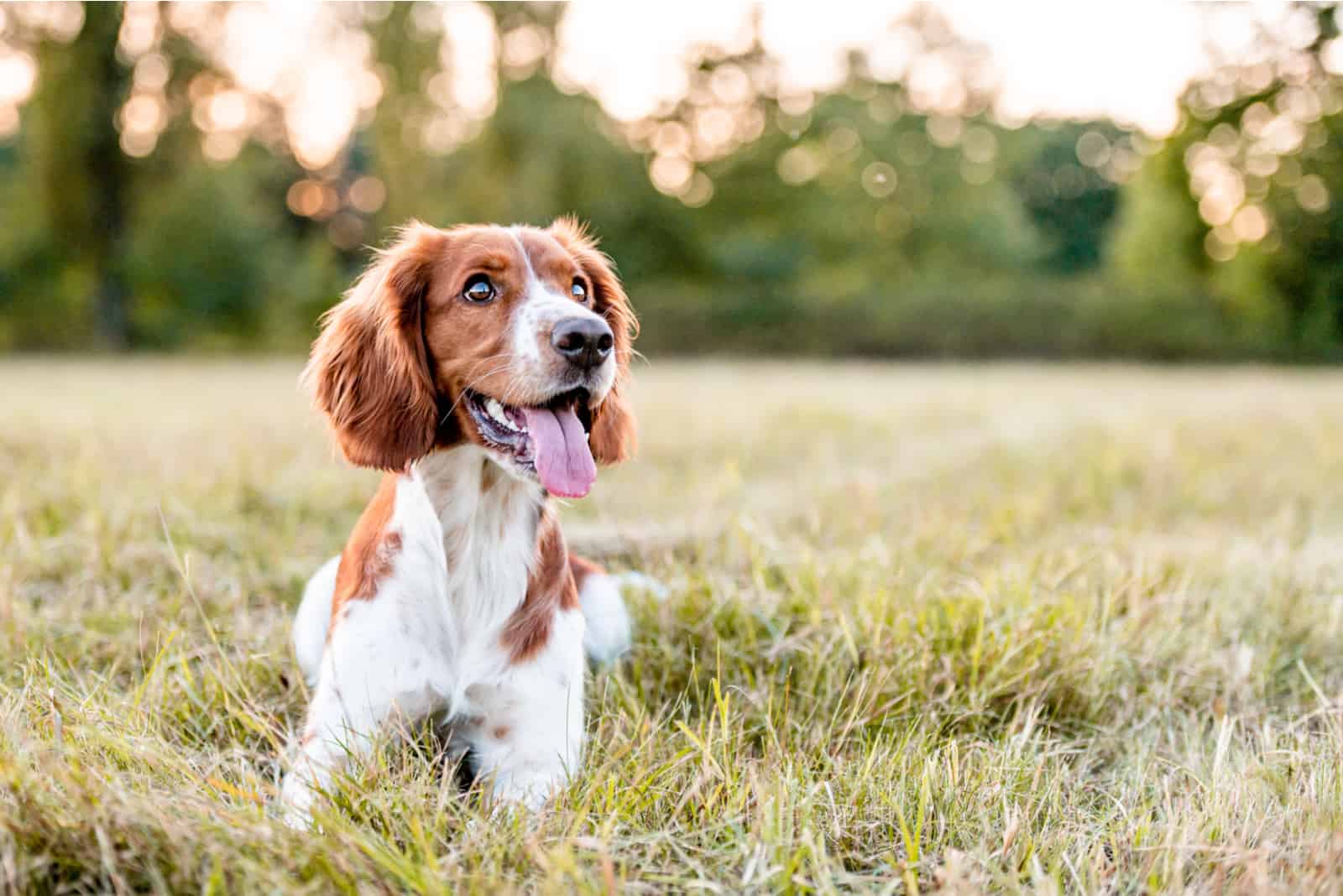 We’ve determined that, even though their color spectrum is not as wide as ours, dogs do see different colors.

A dog’s world is not in endless shades of gray, as many believe, but rather various shades of blue and yellow. Like you, they can enjoy the blue of the sky on a clear summer day, but they’ll find a red rose impressive only in smell.

Instead of the standard colors of the rainbow that we’re used to, a dog would see a spectrum ranging from dark blue, light blue, and gray to pale yellow, brown and dark grey.

This has been proven by many different tests on the visual capacity in dogs done in the last few decades.

Dogs have the most difficulty distinguishing objects in red, orange, and green hues from their surroundings.

These types of color to them look like different variations of brown or blue-gray. However, they see blue and yellow the same way we do.

Knowing this can be helpful to dog owners when shopping for dog things. Yellow or blue dog toys are usually more exciting to them, as they can recognize them without any trouble.

On the other hand, a dog can easily lose sight of a red ball in the green grass during a game of fetch.

How do we know what colors dogs see? 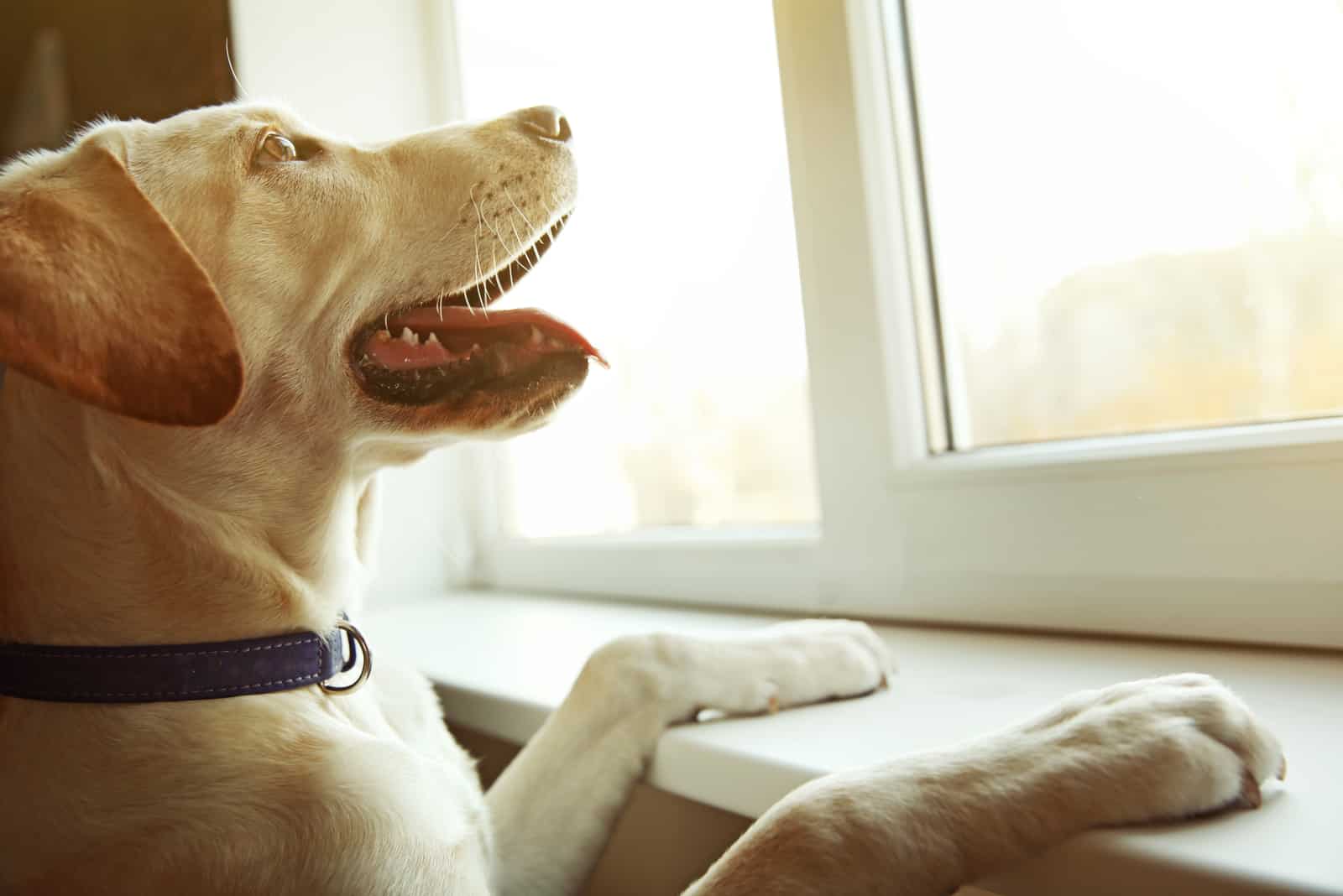 There are two main reasons why we know what colors dogs can see:

1. The results of different tests done on dog vision over the years show it;

2. Because we have an understanding of how the sense of sight works.

Dogs may not be able to tell us in words what exactly they see, but they can show it with their actions.

Researchers conducted many color vision tests to determine whether dogs are capable of chromatic discrimination.

One of these tests included teaching dogs to pick between three different colored circles to see if they could tell them apart.

Dogs would fail the task when shown colors they are not able to distinguish. However, when they were presented with hues they could differentiate, they would consistently perform well.

To ensure that the brightness wasn’t leading the dogs to the right answer, they tested them consistently using different shades of colors.

This made it clear once and for all that dogs do recognize some colors, though not as many as we do.

There’s another reason why we can claim to know what colors dogs see. It’s the fact that we understand how vision works.

By studying the anatomy of both human and dogs’ eyes, scientists have been able to explain what makes us see the world as we do.

Understanding the functions of different cones in the retina leads to the conclusion that a lack of red cone cells makes it impossible for dogs to see red, orange, and green hues the way humans do.

Why do dogs see the way they do? 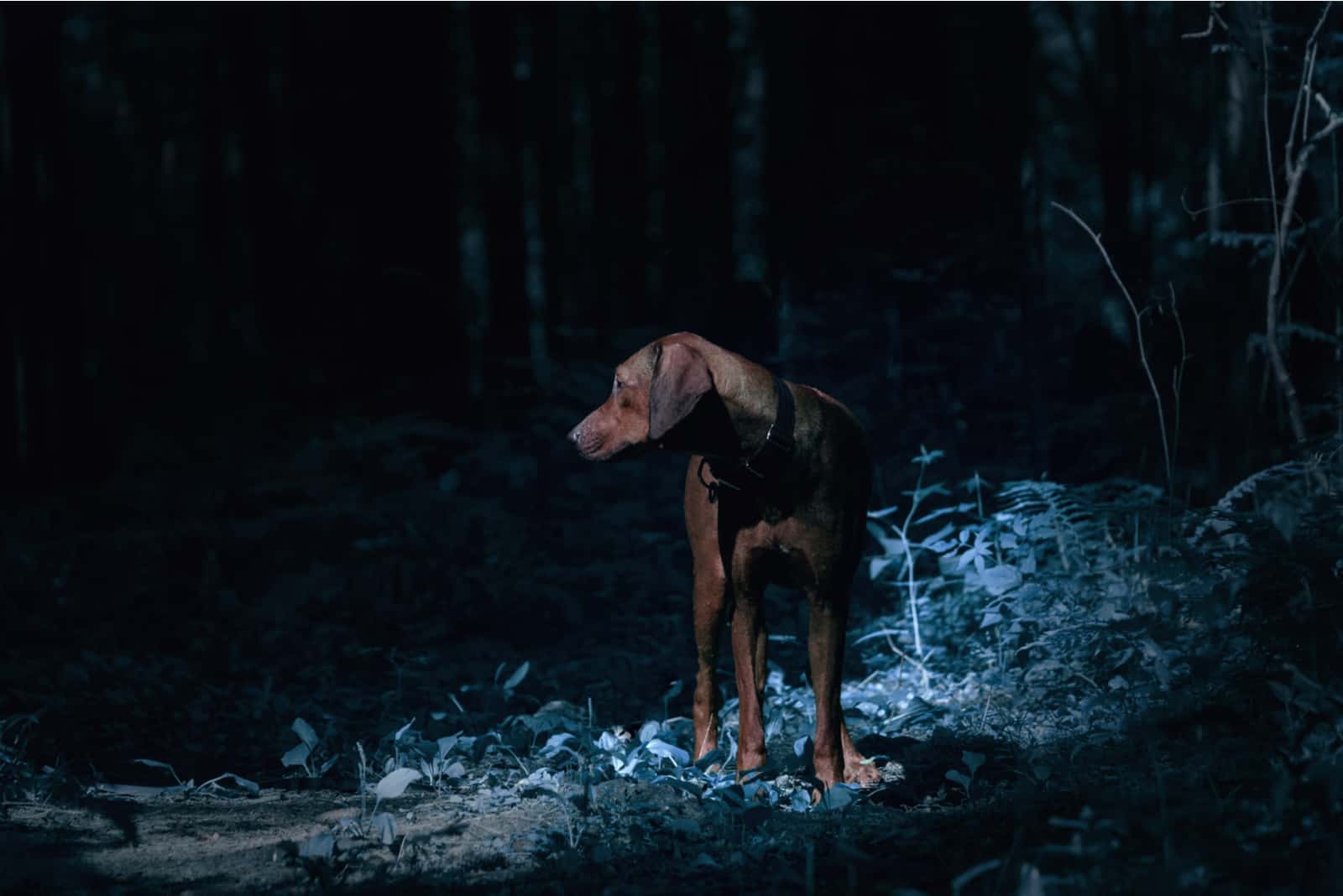 Dogs see the way they do mostly because the characteristics that improve nocturnal hunting were prioritized during their evolution.

Since the first dogs were domesticated from wolves thousands of years ago, many of their physical and character traits have evolved to better fit living alongside humans.

Nevertheless, some of their original instincts were passed down through generations and are still present in the dogs of today. This is why we train puppies to make them adjusted to living with us.

The fight for survival, which caused these instincts to develop, is why their sight is the way it is.

Dogs’ ancestors were nocturnal hunters, which means a good night vision was essential to keep them fed and alive. This explains why dogs are more sensitive to light and motion than color.

Color recognition is not very important in dim light, so it was a fair trade-off.

The Dog’s eyes adapted in other ways as well to make them better hunters. Having a reflective membrane called tapetum and large pupils that dilate widely helps them see prey better at night.

Not all dog breeds have the same visual capacities; some see better and some worse than others. It’s possible that people played a role in this by selective breeding.

Some visually-directed behaviors were seen as desirable in dogs bred for specific purposes like hunting or herding, which is why dogs that exhibited them were chosen for the breeding process.

A good example of this is are Sighthounds, who primarily use speed and sight for hunting. 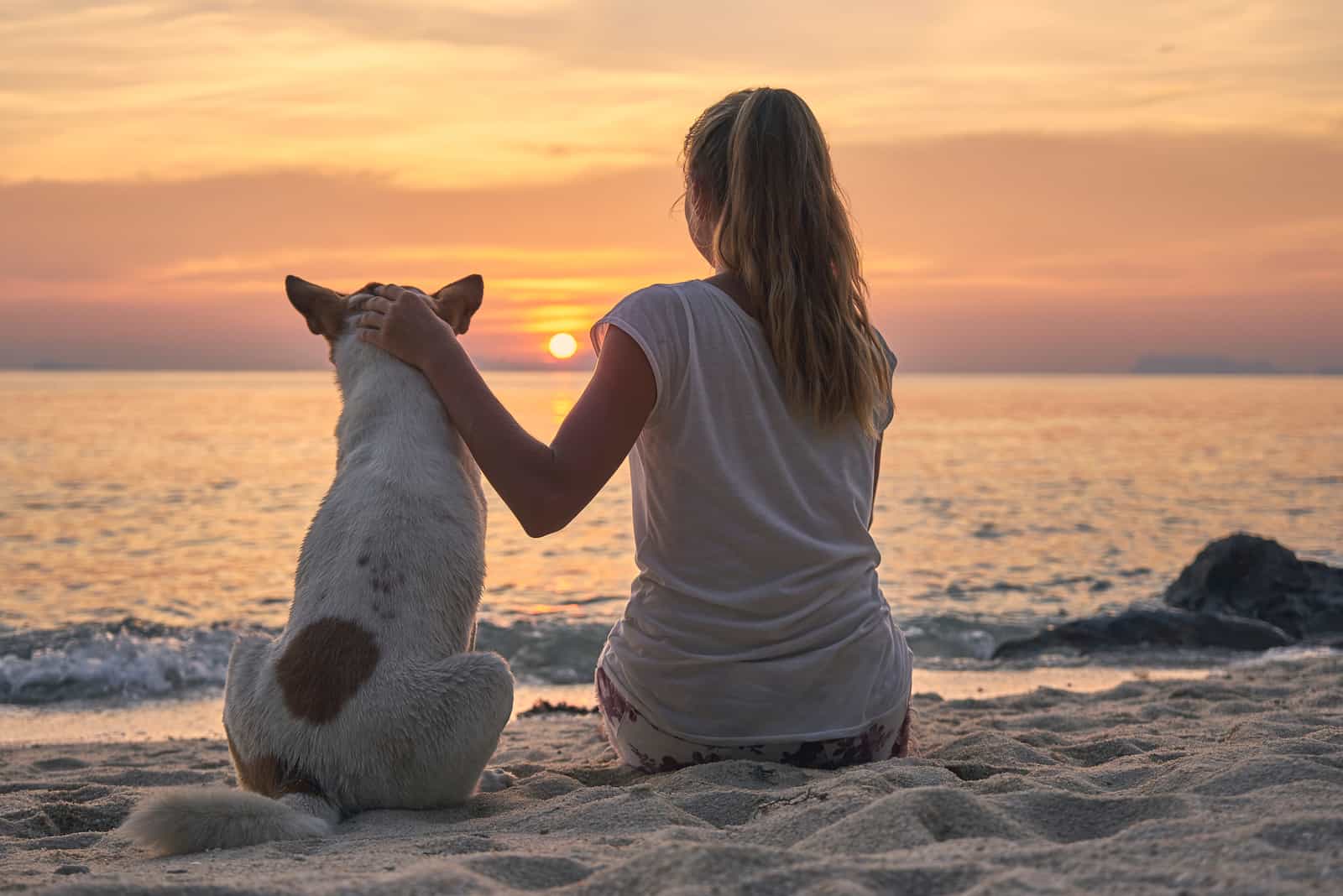 Dogs and humans see the world quite differently, not only in color but in brightness and clarity as well.

The main reason for this is that we have different eye structures, which were developed according to evolutionary requirements for each of our species.

Human eyes have more cone photoreceptors in the retina, and dogs have more rods. That is why we can perceive more color variations than our furry friends.

A dog’s vision is dichromatic, meaning they only have two types of cone cells, while the normal vision in people is trichromatic.

Having more rod cells enables dogs to see better in the dark. They are by nature crepuscular animals, so a good night vision is a much more critical survival tool than the ability to discern colors. Their night vision can make them see things we cannot, keeping them awake during the night.

On the other hand, we are more active during the daytime when color recognition comes in handy.

The quality of dogs’ night vision is improved by having an extra layer of eye tissue called tapetum lucidum. Its function is to reflect light into the retina, making it easier to see in the dark. It’s because of tapetum that dogs have shiny eyes.

Since rods are also responsible for detecting motion, our pups have better motion visibility than us. 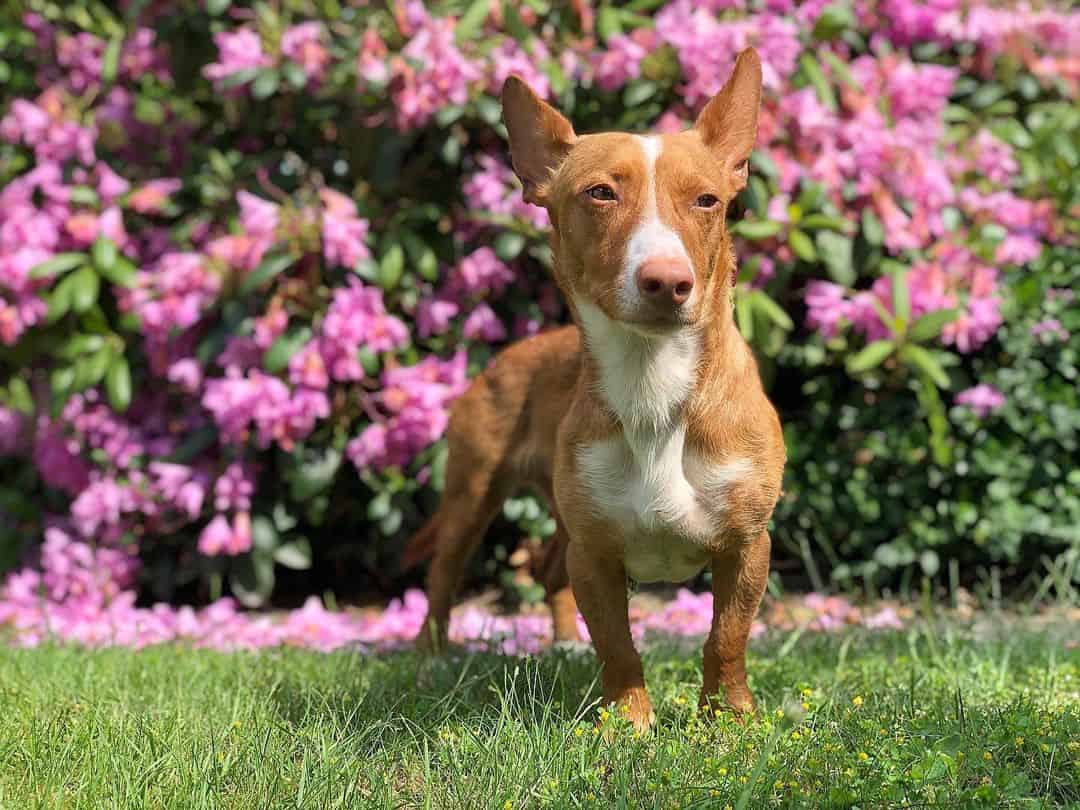 It’s clear how important it was for dogs’ ancestors to notice even the slightest movement in the wild for both protection and hunting. This instinct is present in our pups today, which is why they can be prone to chasing certain moving objects like cars or bicycles.

We have better depth perception compared to our furry companions.

Dogs tend to be more near-sighted than us. Their visual acuity, the ability to discern shapes and details, is around 20/75. That’s why your puppy can have a hard time recognizing you from a distance.

This is because their eyes are placed farther apart than ours, giving them less visual overlap. Binocular overlap in humans is around 140 degrees, which is much more than the average of 30 to 60 degrees in dogs.

The eye placement on the head might make dogs’ depth of vision worse than ours, but it gives them better peripheral vision.

A puppy’s field of view is 240 degrees, while ours is only 180. A dog can notice something moving in the distance, even if it’s out of the corners of their eyes. It’s one of the things that makes them such good guardians.

Related Article: Do Dogs Have Souls 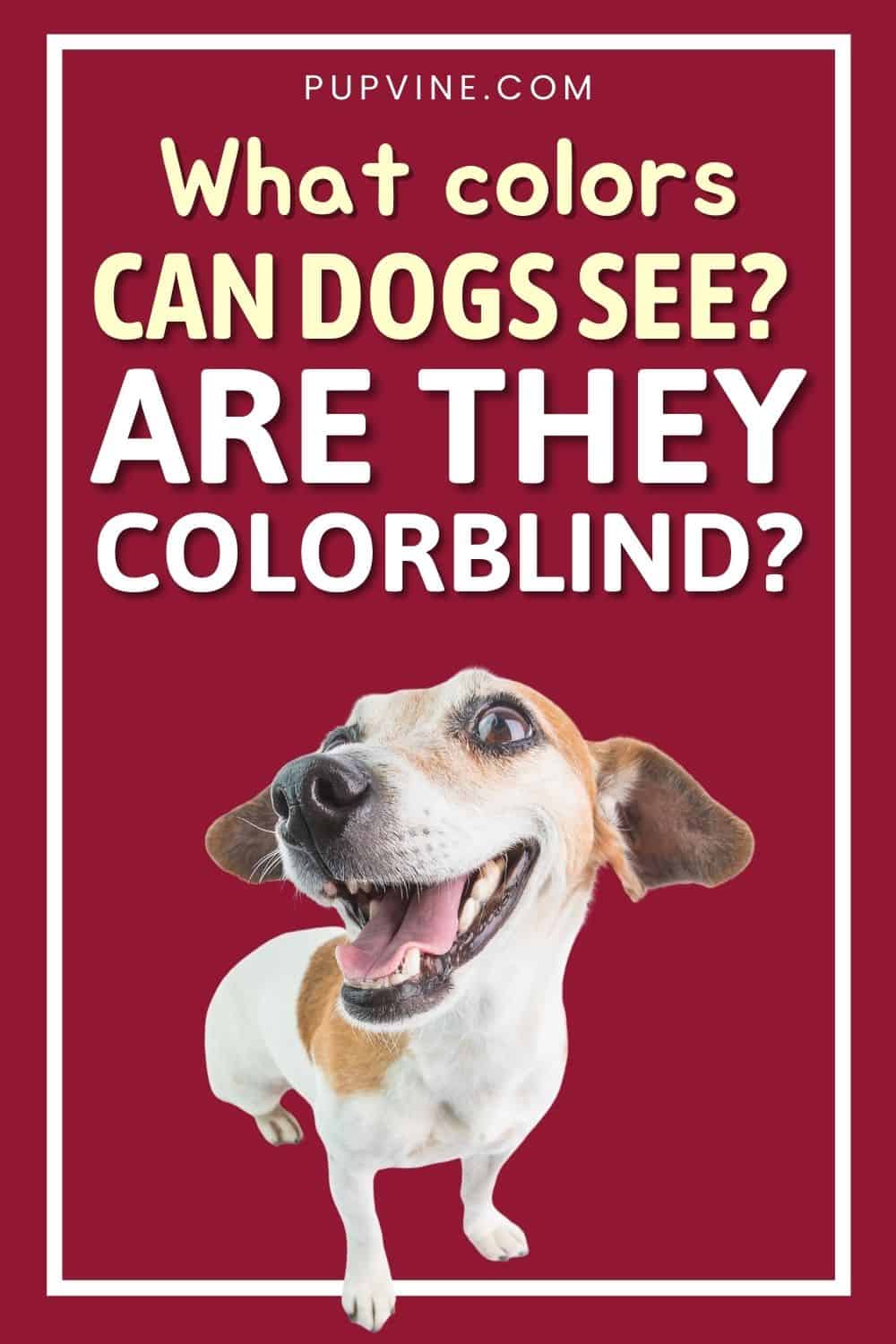 5 Rationales For Why Do German Shepherds Tilt Their Heads

[…] with the same trend appearing in senior dogs who start experiencing loss of vision. In addition, dogs do not see as many colors as humans, so any extra information is welcomed by their […]

[…] colors. The variety of colorful options are probably not that important to your pooch because dogs don’t see colors the same way we […]

[…] a good thing that dogs can see only blue and yellow because the Blue Tick Rat Terrier mix puppy can see how pretty it is. With a lovely ticked coat […]

Why Is My Dog's Nose Dry? How To Tell If Your Dog Is Sick

[…] nose is a fantastic tool. Dogs see the world very differently from the way we do. They see with their eyes, but they also ‘see’ with their noses! They have an amazing sense of smell that is far […]

What Colors Can Dogs See Are They Colorblind this article is very great and very much helpful for me! Thank you so much for sharing all information. If any one has color blindness problem then visit here and get full information.