Corgis are one of the most well-known dog breeds out there. Their golden or apricot fur mixed with their long ears and fluffy butts have made them famous worldwide.

It doesn’t matter whether you have a Cardigan Welsh Corgi or a Pembroke Welsh Corgi; these short-legged puppies will be the center of attention no matter where you go!

However, not everyone knows that Corgis don’t have to come just in red, white, black, golden, and tri-color. They can come in a wide variety of shades, including sable, brindle, or even merle!

In fact, the merle ones always have all eyes on them. This pooch is probably the most unique type of dog you can see on the streets. This is exactly why requests for merle Corgis are on the rise.

But there are a few things you should know before you purchase a merle Corgi for yourself. Here is what you need to understand about this type of Corgi.

Contents show
1 1. The History Of The Merle Corgi
2 2. The AKC Recognizes Blue Merle
3 3. There Are No Merle Pembroke Corgis
4 4. Merle Is Caused By A Dilution Gene
5 5. The Merle Gene Affects More Than Just The Coat Color
6 6. Double Merles Have Many Health Problems
7 7. Are Merle Corgi Breeders Reputable?
8 The Bottom Line

1. The History Of The Merle Corgi 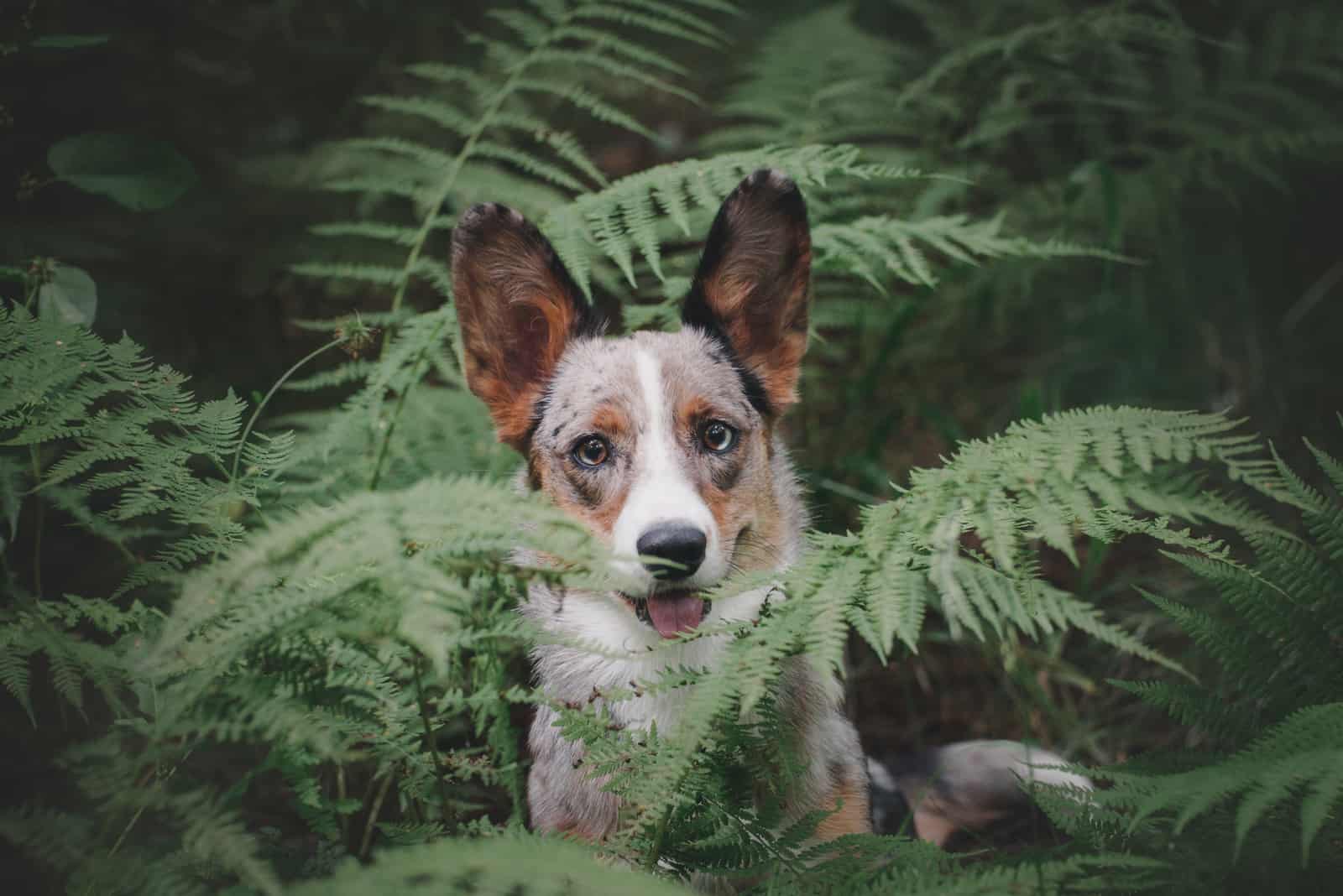 Corgis are a herding breed native to Wales. They were kept as working dogs, and they were excellent at their jobs. Their name means ‘cor gi,’ which is Welsh for ‘dwarf dog.’

The entire appearance of Corgis is adjusted to their life in the fields. They are tiny in size, so the cattle wouldn’t be able to kick them easily, and their tales were cut so they wouldn’t be stomped on.

In the later years, Corgis replaced their life as working dogs for the life of a beloved family pet.

Until 1934, the Welsh Corgis were considered to be one breed. Today, the American Kennel Club (AKC) recognizes the Cardigan and Pembroke Welsh Corgis as two separate dog breeds.

The merle gene isn’t naturally found in Pembroke Welsh Corgis, so don’t expect to see a purebred with this pattern!

Unlike many other dog breeds, the merle pattern is recognized by the AKC – but this is only the case with blue merle.

According to this kennel club’s breed standard, blue merle pups can come with or without tan and brindle points.

White flashings are allowed, and they are usually located on the neck (either as a collar or in part), muzzle, chest, underparts, legs, and the tip of the tail. Sometimes, they can be found as a blaze on the head.

Keep in mind that the white marking on the head shouldn’t be dominant, and it should never be around the dog’s eyes.

The AKC specifies several colors allowed to a part of the merle Corgi pattern (sable, brindle, black, gray, marbled, all shades of red), as long as the blue is predominant.

Any color other than these will disqualify a dog and make it unable to register.

Corgis’ noses are always black – except in blue merles. While a black nose is still recommended, butterfly noses are tolerated. However, the nose shouldn’t be in any other color.

Red merle, brindle merle, and other merle variations aren’t allowed by the AKC.

3. There Are No Merle Pembroke Corgis 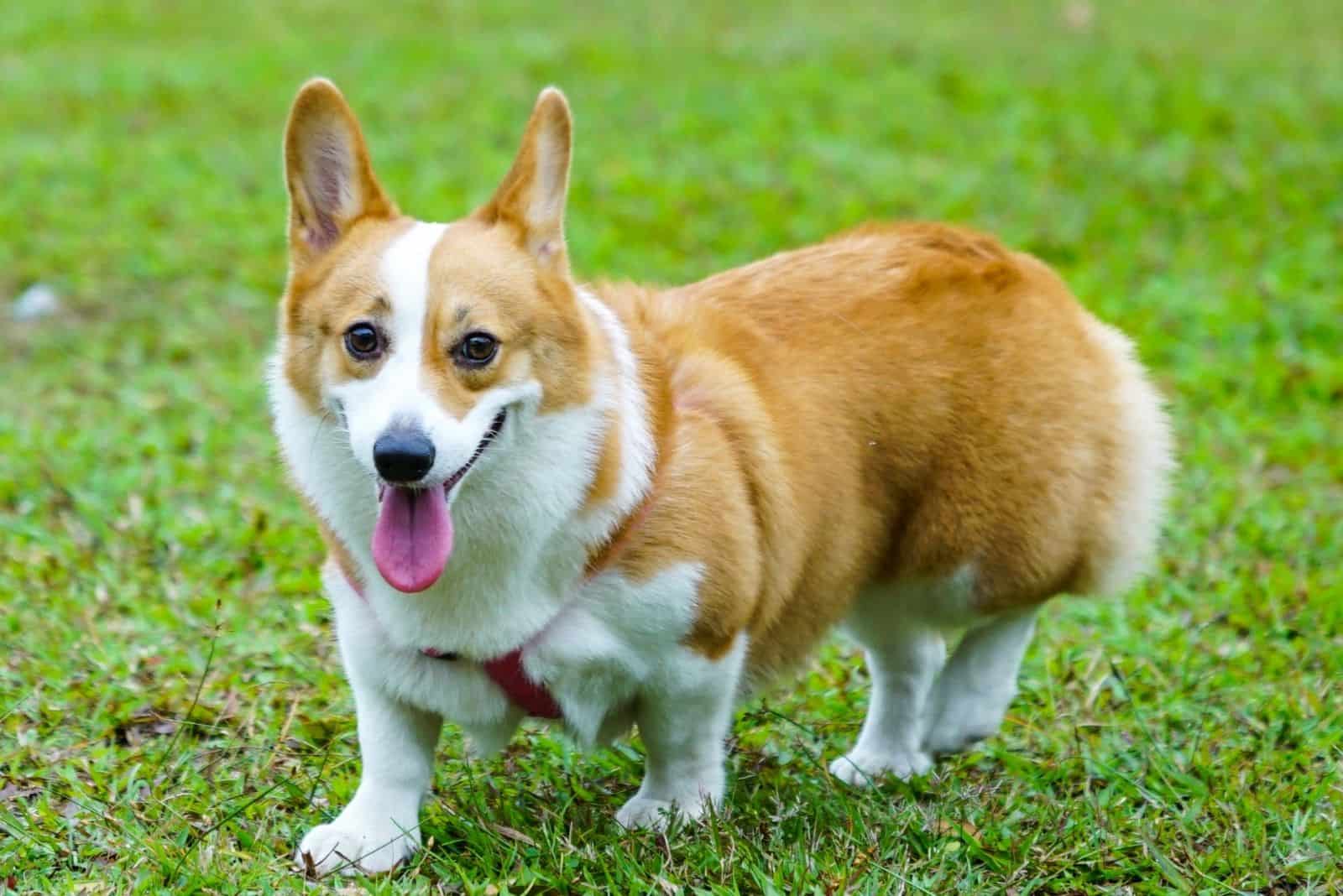 For most people, even those familiar with the breed, Cardigan Welsh Corgis and Pembroke Welsh Corgis look quite similar.

But the truth is, they are two distinct breeds with different genetics. The genetic separation happened centuries ago, so their DNA is fairly different.

One of several traits that make Cardigans different from Pembrokes is the coat color.

While purebred Pembrokes come in just a few colors, including shades of red and tri-color, Cardigans can come in many more colors that aren’t natural in Pembrokes.

Merle Corgis can be found in Cardigan Welsh Corgis and not in the Pembroke breed. If you happen to find a merle Pembroke Corgi, you should be aware that it isn’t purebred.

Chances are the pup is a crossbreed – most likely with a blue merle Cardigan, Australian Shepherd, or a Border Collie.

The same goes for the brindle color, which is determined by the dominant K-Locus.

While the merle gene is, in fact, a dilution gene, there hasn’t been a purebred merle Pembroke since the breed was made, so it’s impossible for this pattern to suddenly appear in the Pembroke’s genetics.

4. Merle Is Caused By A Dilution Gene 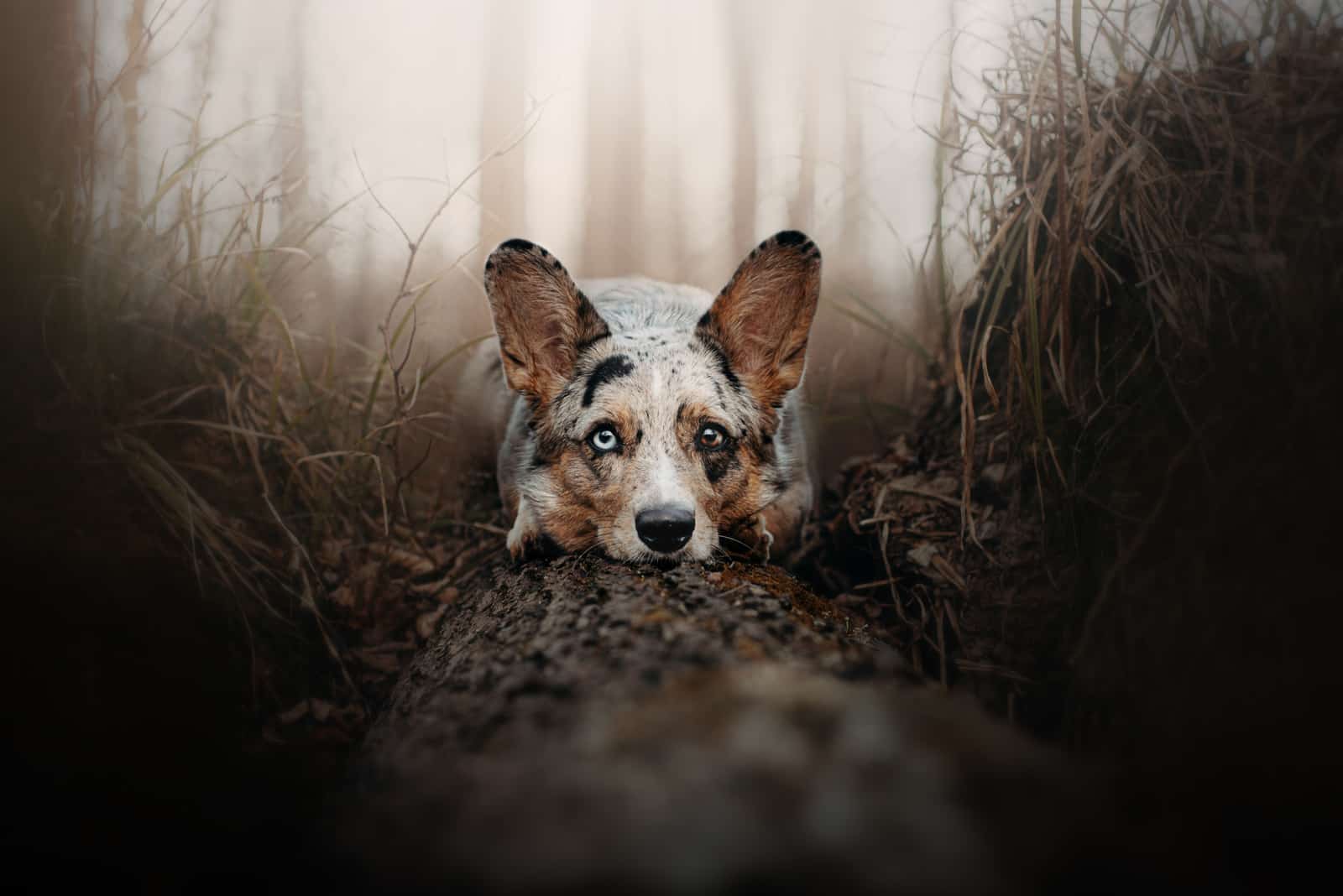 The merle color pattern is determined by a dominant merle gene. If the dog’s parent has a merle gene, you might end with a merle Corgi puppy.

Unlike recessive genes, dominant genes can’t remain hidden. This is why it’s impossible for the merle gene to suddenly express itself in the Pembroke’s DNA.

The merle gene is also known as a dilution gene. It wouldn’t give your pooch a color it doesn’t have in its genetics – it would just dilute it. In other words, it provides lighter patches on the animal’s fur.

As a dominant gene, merle becomes more apparent than the original coat color a dog has genes for. This is how the merle color scheme is made.

There has been much research done on this color pattern in Corgis.

All of them concluded that the merle gene isn’t naturally present in the Pembroke’s genetics. This is why all merle Pembrokes are considered to be crossbreed and not purebred.

5. The Merle Gene Affects More Than Just The Coat Color 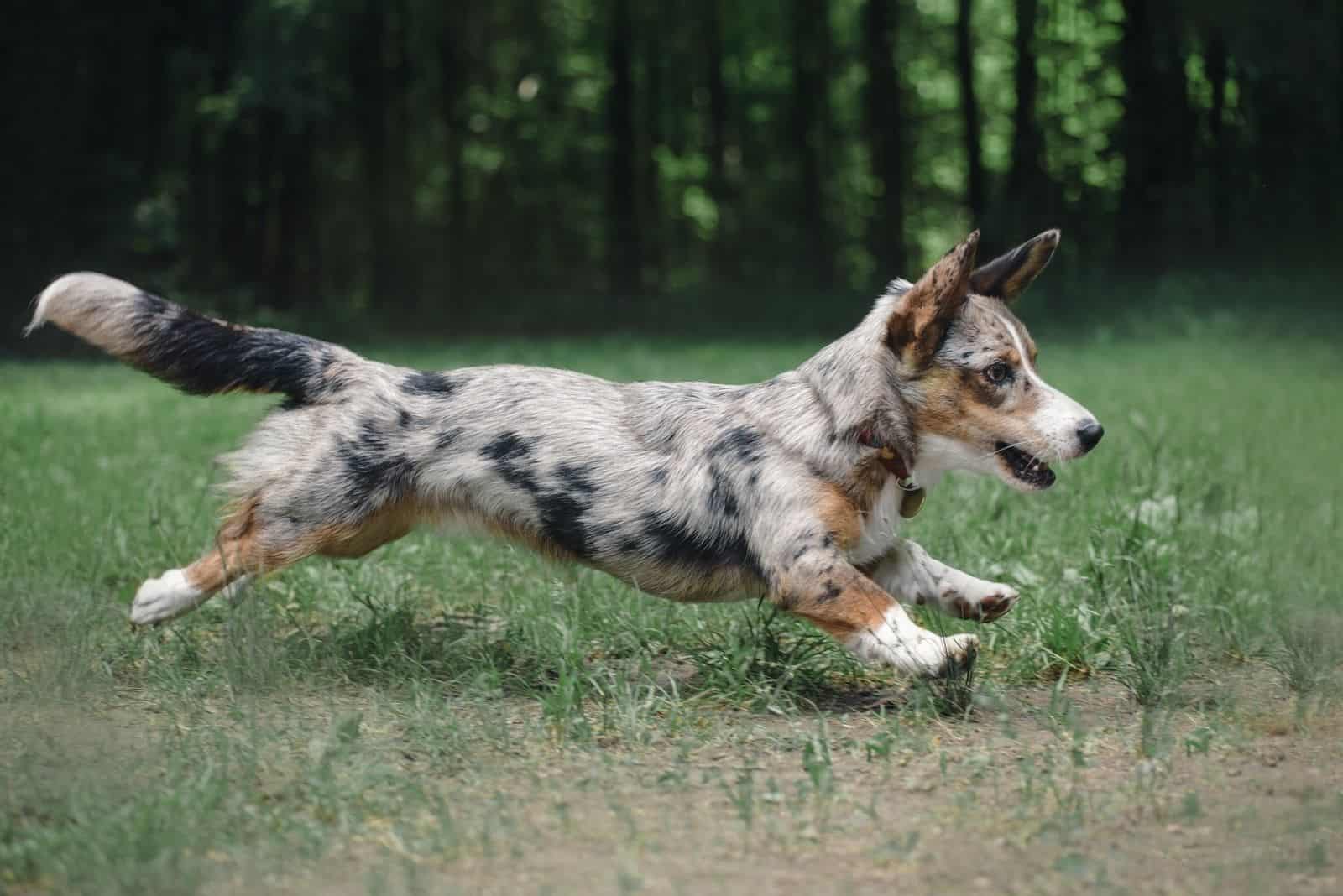 The presence of a merle gene is most noticeable in the dog’s fur, as this is where the discoloration is the most visible. However, this gene affects much more than just the coat color.

This gene dilutes everything it can. This includes not just the pigment found in a dog’s coat but also the skin, eyes, and sometimes even muscles and bones!

This is why heterochromia is so common in merle Corgis. Their eye color gets the same pattern as the fur.

The same goes for a dog’s skin. This is most noticeable on your pooch’s nose, lips, and rims of the eyes. If you look closely, you can see the discoloration and the speckles inside their mouths and underneath their fur, as well.

Sadly, this also means that merle Corgis can have several health issues. 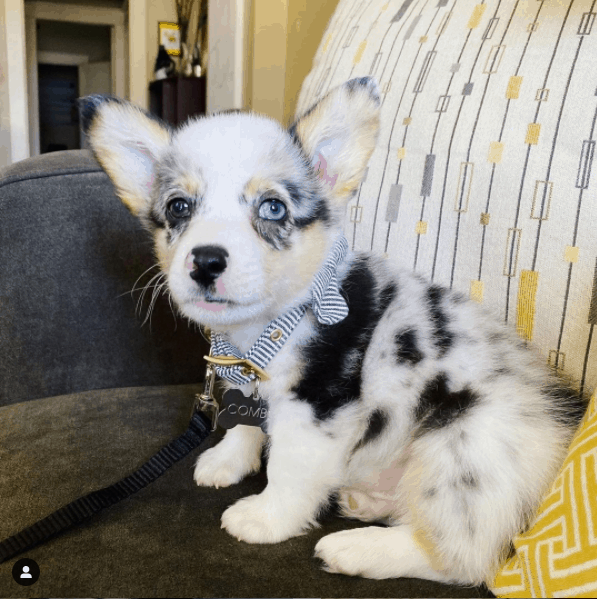 Since the gene dilutes melanin in a dog’s eyes, problems with eyesight and even blindness can happen, especially with dogs that have blue eyes.

The same goes for a merle dog’s hearing. Since the merle gene dilutes the surface of a dog’s ear, it can damage the nerve endings, causing hearing problems or deafness.

Of course, this doesn’t have to mean that your merle Corgi will have any of these health concerns. However, they are much more common in dogs with a merle color pattern compared to others.

6. Double Merles Have Many Health Problems 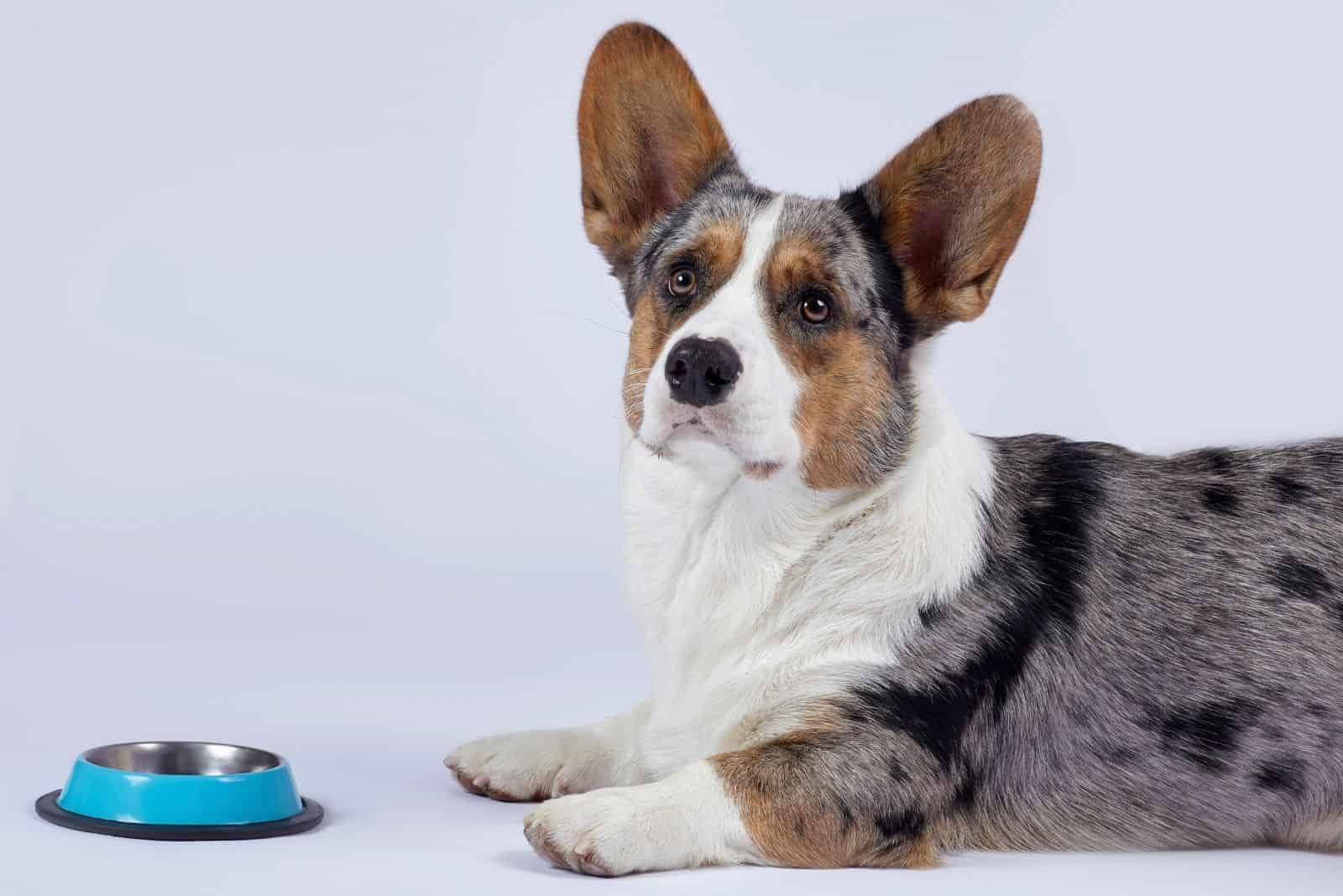 A double merle is a dog that has inherited two merle genes – one from both of its parents. This type of puppy is also known as a homozygous merle.

You’ve already read about the health issues that come with the merle gene. With double merles, the chances of a dog developing a serious genetic condition are twice as likely!

Not just that, but double merles can experience many health issues other Corgis will rarely face. This includes many bone and cardiac problems.

Because of this, intentionally mating two dogs with a merle gene is considered highly unethical and many canine societies forbid it entirely. When you breed two merle Corgis, every puppy has a 25% chance of being a double merle.

Of course, sometimes double merles can happen by accident. The merle gene can be cryptic, meaning it will remain unnoticeable, at least on a Corgi’s fur.

This is why it’s important to conduct genetic testing on not just Corgi puppies but their parents as well. 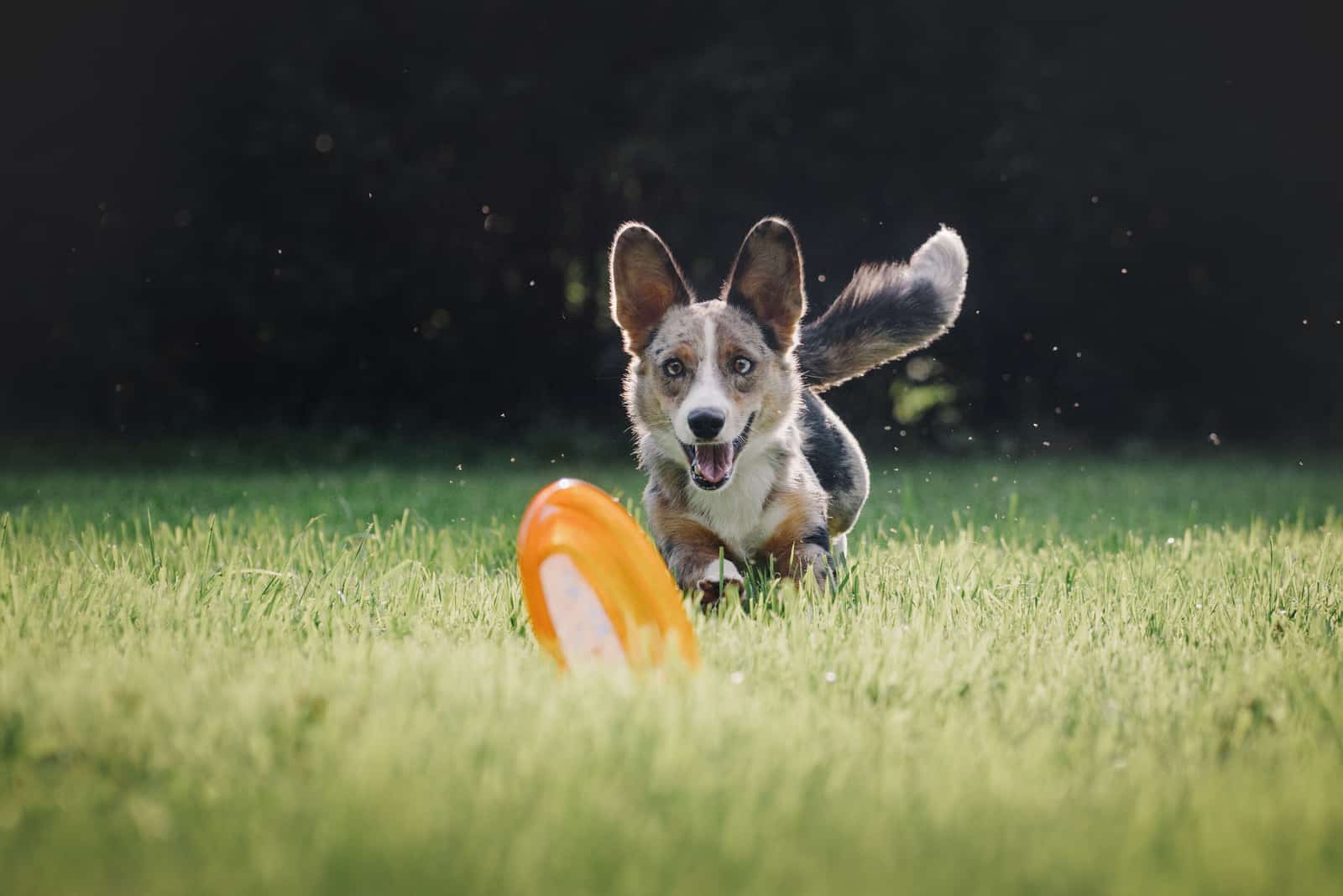 Breeding merle puppies can be reputable in Cardis, while merle Pembrokes aren’t allowed for registered breeders.

However, not all merle breeders are reputable, and sadly, some even willingly make double merles, as breeding two merle parents is the only way you can be certain you’ll get merle offspring.

Since merle Corgis are growing in popularity, chances of encountering a breeder who’s just trying to make a quick buck are more likely than ever.

Because of this, it’s important to take your time and do the proper research when choosing the breeder you’ll be giving your money to.

A reputable breeder will conduct all necessary genetic testing and only reproduce dogs with good genes.

Puppy mills and online sales are known red flags, and you should never opt to get a puppy from these two sources.

If you need some help, you might consider looking at the Cardigan Welsh Corgi Club of America’s website.

This is where you can find a list of reputable breeders in your area. If you’re not in the US, try contacting your local Corgi clubs for advice.

Related: The 3 Most Reputable Corgi Breeders In Ontario For 2022 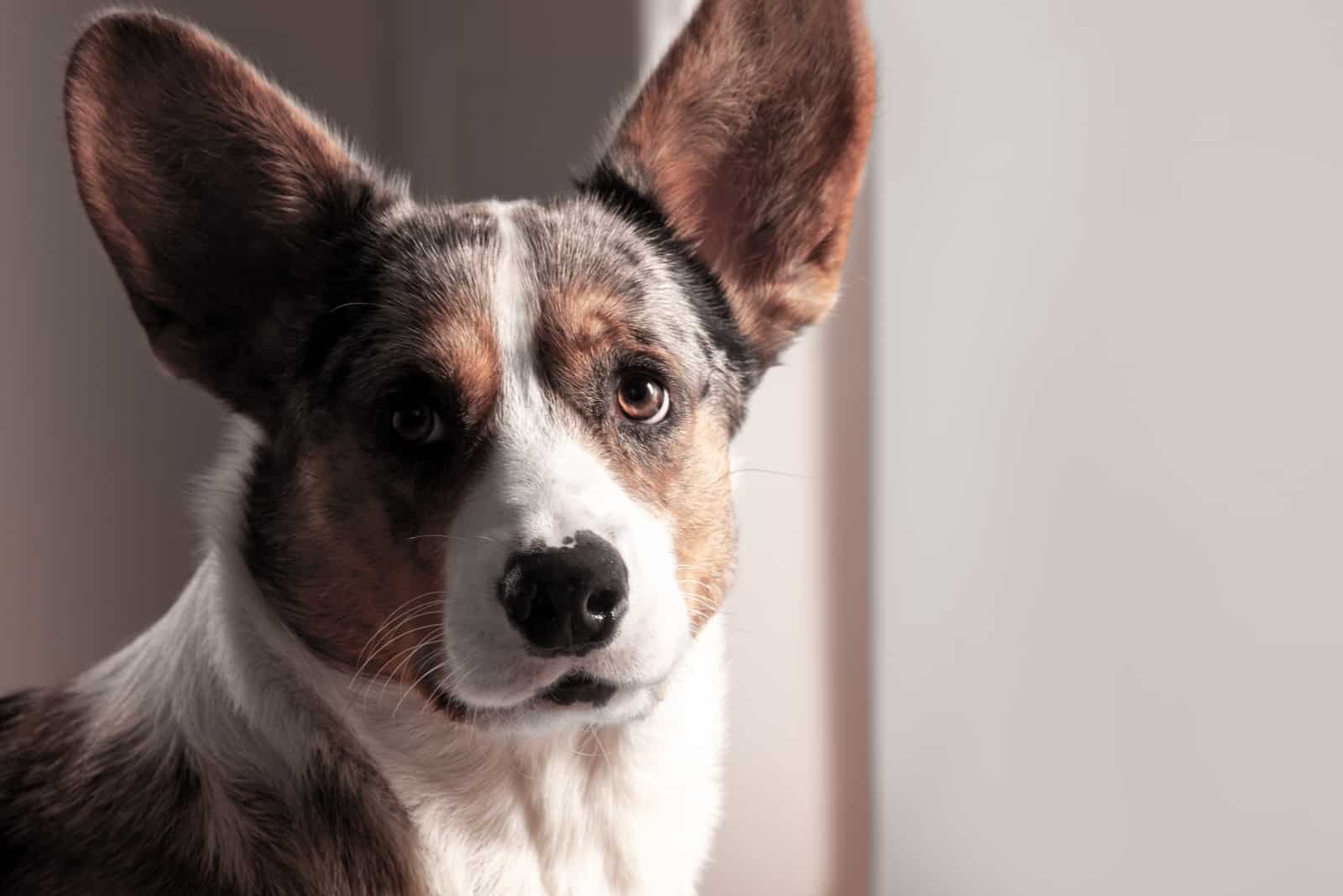 Although controversial, merle Corgis can be amazing family pets, as long as you’ve done all you can to ensure your pooch is healthy.

However, if you’re going to purchase a Corgi with this distinguishable pattern, make sure you go to a reputable breeder who will ensure all of their puppies are healthy.

Even so, it would be a good idea to take your merle puppy to the vet, who will be able to test your pup’s hearing and eyesight. You can never be too certain when it comes to the health of your long-term companion.

And even if you find out your pooch has some issues, don’t panic. Dogs that are entirely blind or deaf still make fantastic pets.

They don’t realize they have a serious defect, and while some additional care might be necessary, they can get by in the world without any problems.

Crossbreeding Corgis to get a merle Pembroke Corgi is not just unethical but also deceptive. Merle Pembrokes aren’t purebred, and they can never be. At the same time, they’re being sold for a large amount of money.

In fact, purchasing a merle Corgi can cost you up to $10,000, sometimes even more!

Merle Corgis are beautiful, but they come with their own set of issues. This is something every dog lover should be aware of. 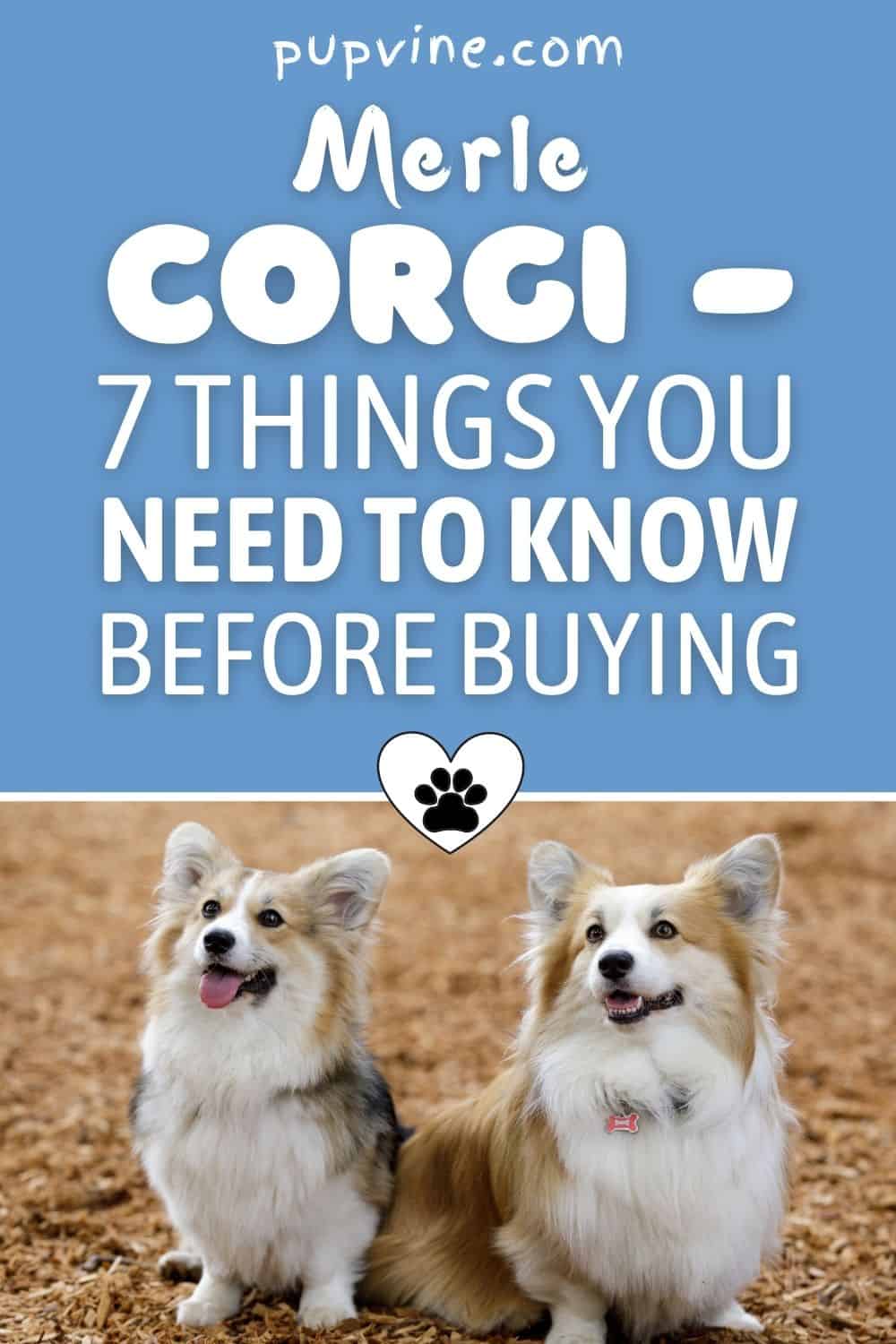 […] you are searching for a rare Corgi, such as the merle Corgi puppy, its price can get as high as […]

[…] fawn or red, Cardigans can come in many other shades and patterns, including tricolor, parti, and merle. In fact, it is almost impossible to find a Cardigan in a single […]

Shaved Corgi: To Buzz Or Not To Buzz, That Is The Question

[…] Pembroke, or Merle Corgi – all of them will accumulate dead hair. Some deshedding would surely be preferable, but we […]

Corgi Great Dane Mix: Is This Hybrid A Good Choice For You?

The 3 Most Reputable Corgi Breeders In Ontario For 2022

[…] course, rare-colored Corgis such as the merle Corgi often have a higher price tag compared to their more common-colored […]