In fact, they’re awesome four-legged pals! The American Kennel Club ( AKC ) agrees with us. This purebred dog was once used only as a working dog (like Border Collies or Retrievers ). Now it’s a beloved, laid-back pooch with an adorable attitude.

But, the only problem is: are all Aussie puppies this adorable? Are there any differences between male vs female Australian Shepherds? Should I get one gender and forget about the other?

Take a chill pill, and let’s find out together: are female or male puppies better? 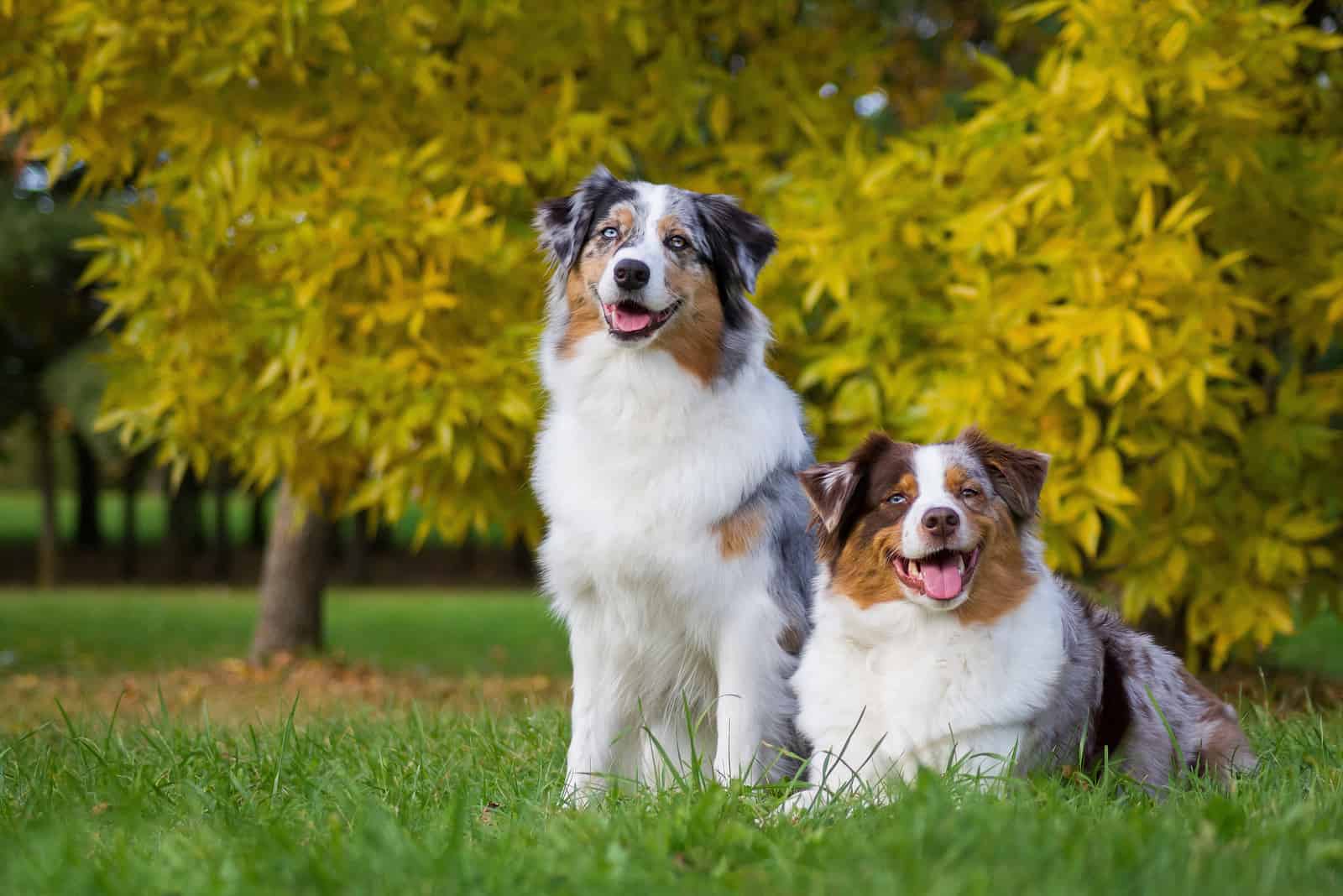 There isn’t only one difference between male and female Australian shepherds; there are multiple.

Those differences are distinguished in:

Physical differences might be what sets male and female Aussie shepherds apart, but inside – they’re pretty much alike! 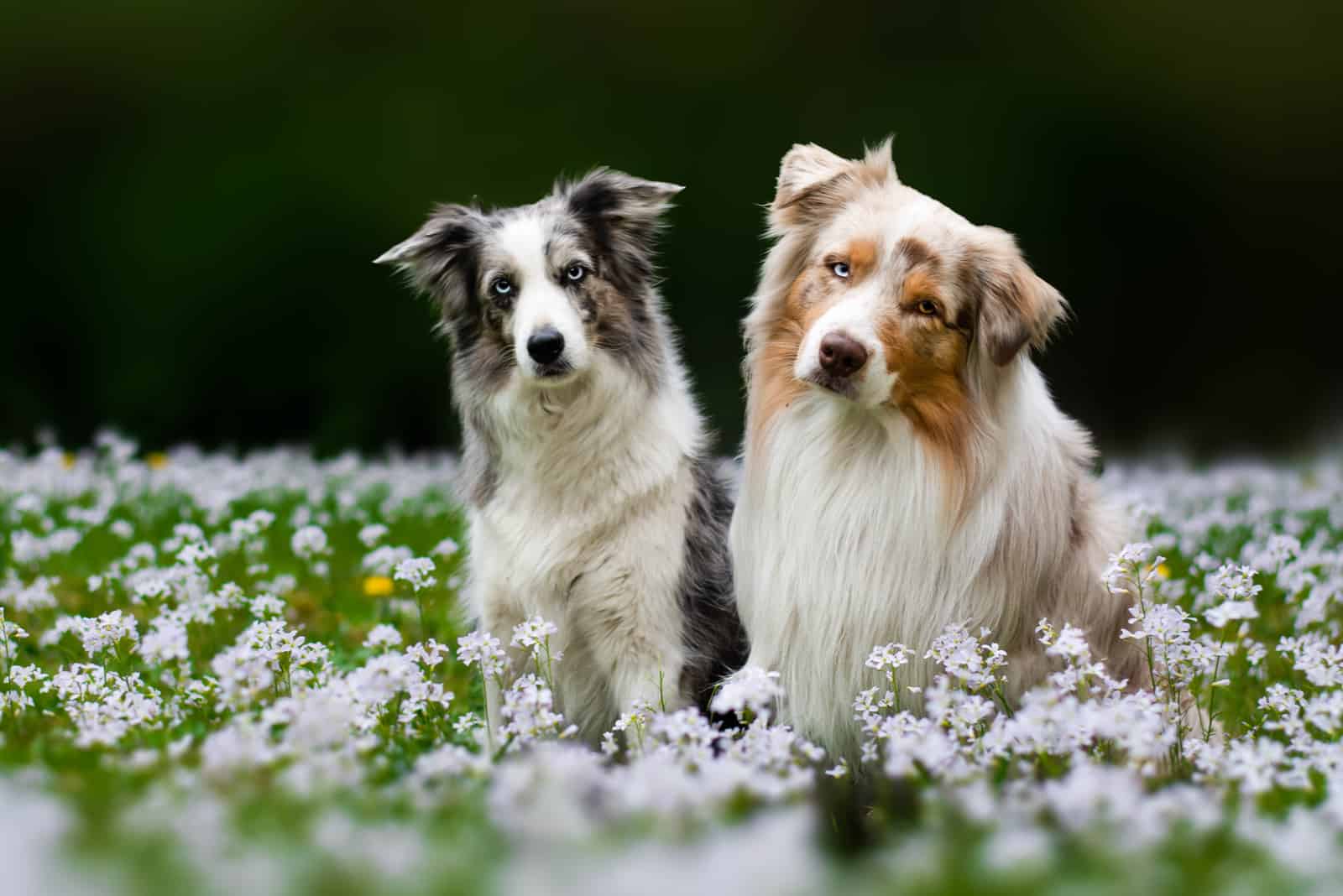 The female’s height usually varies from 25 to 29 inches. They’re also smaller in length. The average female grows up to around 28 to 31 inches. A male’s length is usually from 31 to 36 inches.

Weight is another point of comparison between the dog genders. Females usually weigh between 35 to 55 pounds, and males weigh from 55 to 70 pounds. As you can see, they’re on the larger side of male dog breeds.

Male Australian Shepherds are much thicker and denser than their female counterparts. They have heavier bones (yes, it is a thing) and longer hair. These features help them in doing exercise and mating. Also, they’re one of the reasons for their distinct weight.

Appearance is a characteristic that most easily allows us to set dogs apart. Australian Shepherds are no exception here. There are two aspects that distinguish these two genders.

First of all, males have to attract females to mate. Every animal does this, and Aussie Shepherds follow this tendency too.

Next, male Aussies have longer hair than females and are more cheerful. Their head is also more distinctly masculine. Since females don’t need to exhibit many of their traits to find a mate, they don’t need to have these features. 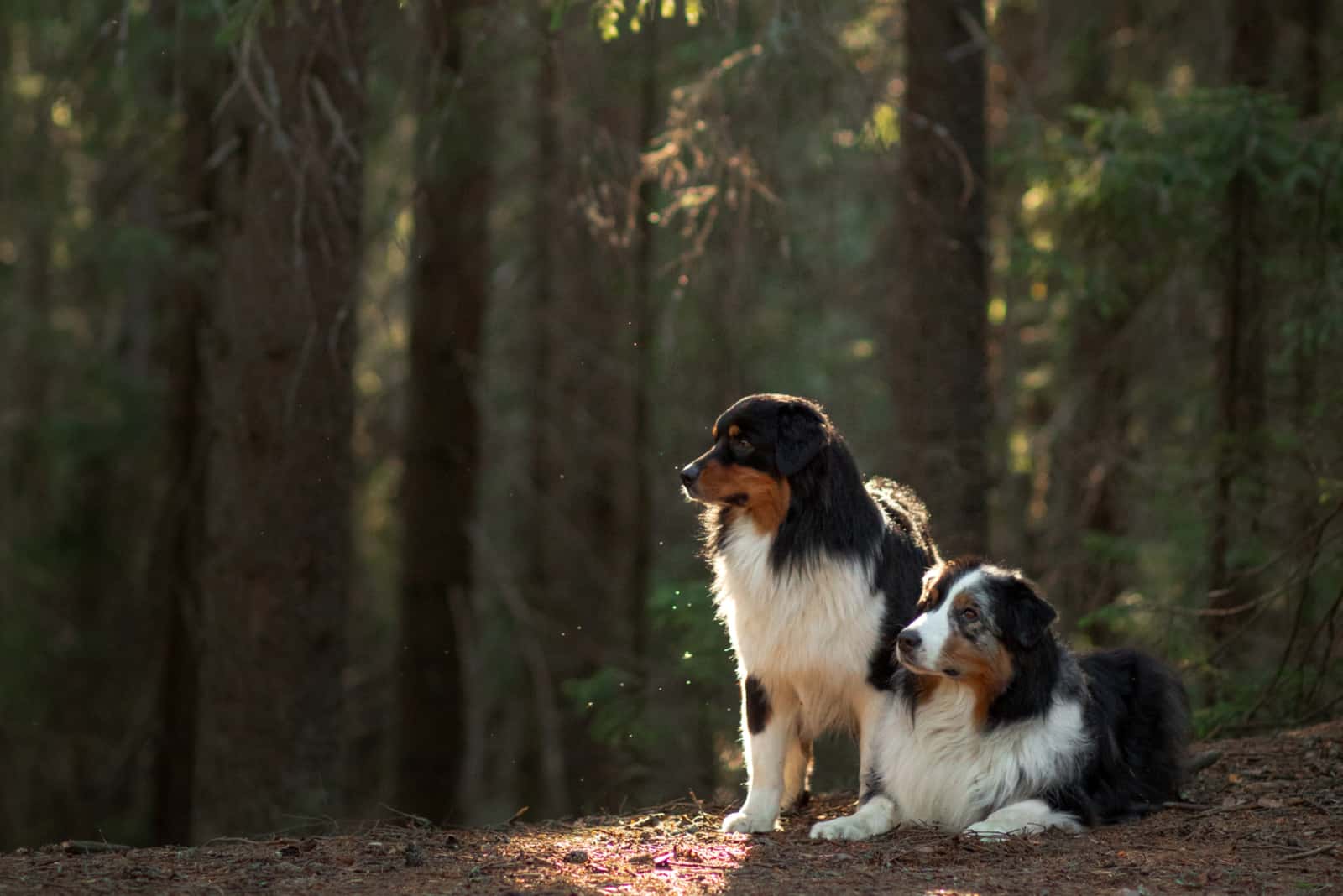 During this period, changes in the female dog ‘s body will prepare it for reproduction. Her organism will produce a secretion to attract male Australian Shepherds. Only during the estrus phase will the dog be interested in intercourse.

To prevent female Aussies from getting pregnant, many dog owners choose to spay them. This means they undergo a surgical procedure to remove the ovaries and other parts of the reproductive system.

Spayed females lose their ability to reproduce. They don’t go through the estrus phase and therefore won’t have an interest in mating. If you don’t want your dog to undergo this surgery, you will need to keep them away from male dogs during the estrus cycle.

The male equivalent to spaying is neutering. This is a surgical procedure where the vet removes the dog’s testes.

Aside from impeding the dogs from breeding, spaying and neutering also reduces behavioral issues related to reproduction.

Pups in love can do crazy things. When in heat, they jump on other dogs and people and tend to destroy furniture out of frustration. Also, males can escape and put themselves in dangerous situations, all in the name of love! 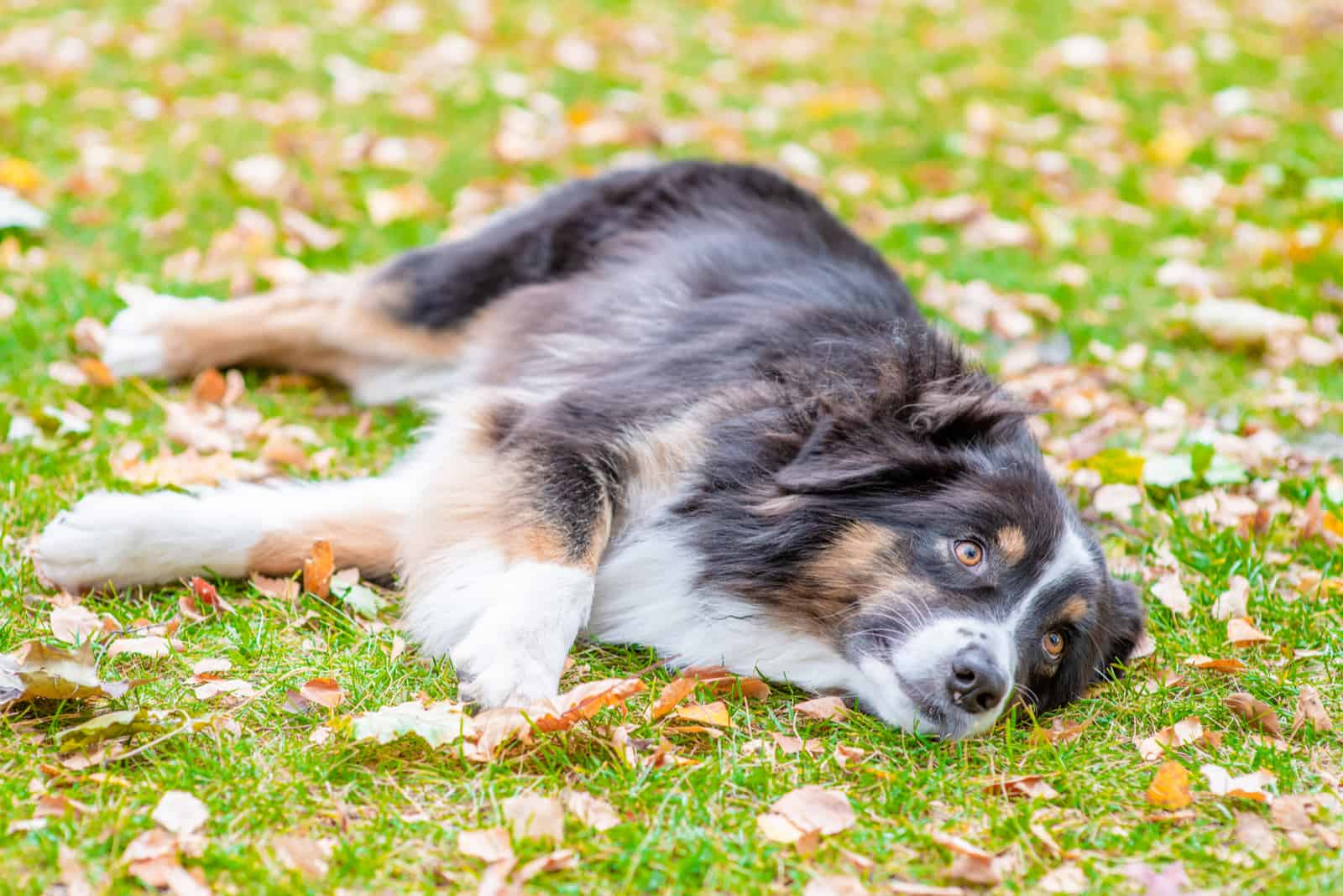 Both male and female Aussie Shepherds can suffer from different diseases. However, their lifespan is quite similar. Australian Shepherds usually live from 13 to 15 years. These numbers may vary a bit. Some Aussies live longer, some less, but it has nothing to do with their genders.

Even though they’re quite healthy dogs, spaying and neutering can prevent numerous health problems. Spayed females have reduced chances of suffering from mammary tumors and uterine infections. If you don’t spay them, well, you know what happens after mating.

Neutered male Aussies have a reduced chance of suffering from prostatic hyperplasia and testicular cancer.

Some studies show that some diseases are more common in neutered or spayed dogs. However, there are numerous benefits to having your dog spayed or neutered, and many vets even recommend these surgeries.

In the past, the most popular opinion was that you needed to spay or neuter your dog quite young, when it was still a few months of age before they reached puberty. It was believed that in doing this, bad behavior would be prevented.

However, recent studies have shown it’s best to wait until the dog reaches physical maturity.

Whether you get a male or female Aussie Shepherd, it’s important to know the general health problems they might suffer from.

Here’s a list of the ten most common conditions that could affect this breed:

Are There Differences in Training Male And Female Australian Shepherds? 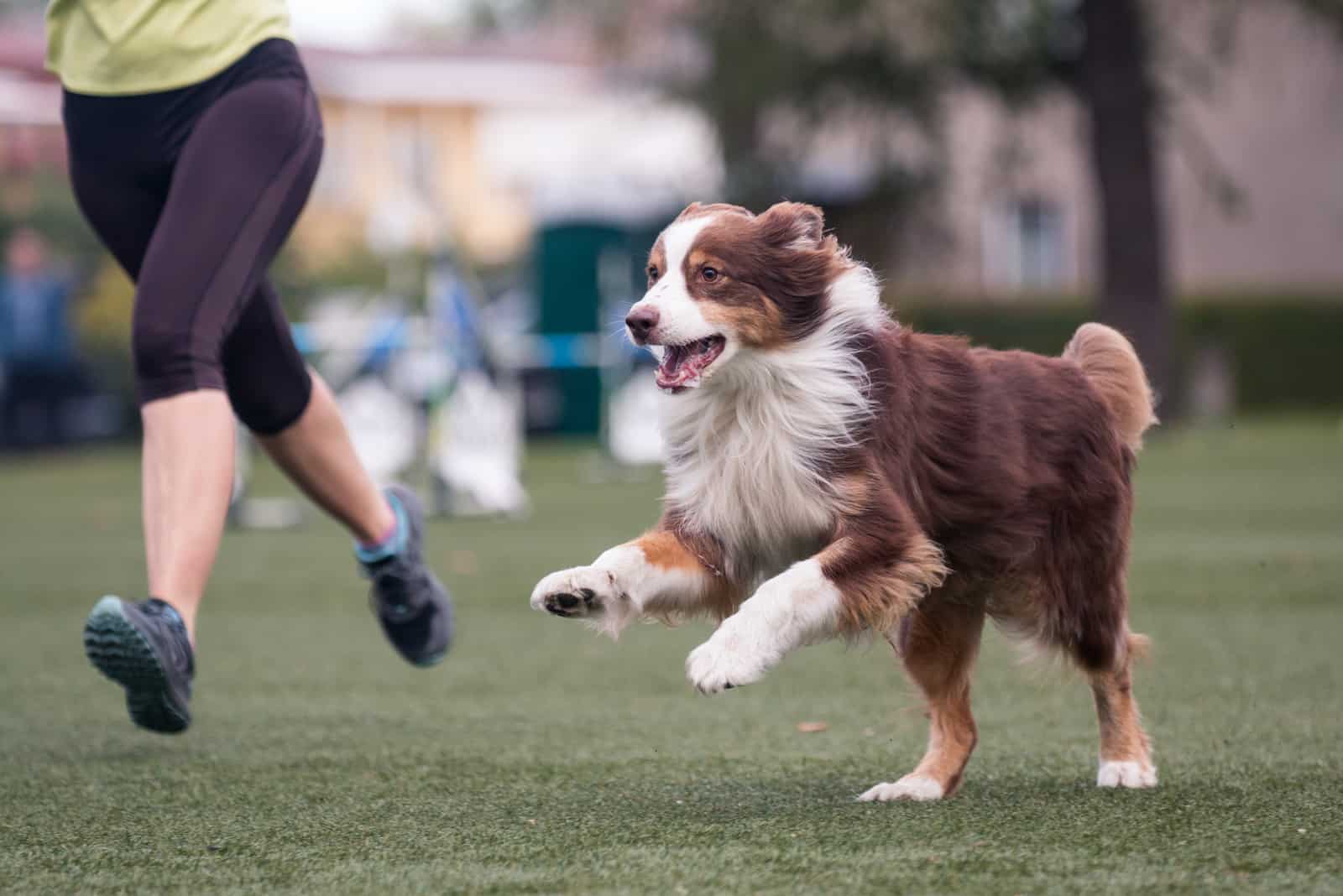 Of course, there are differences between training male and female Australian Shepherd puppies. We say puppies because training should start as early as possible.

The average male Australian Shepherd is more eager to learn and submit to training than female dogs. The main reason behind this behavior is that males are more motivated by treats and praise, so it’s easy to train them.

Nevertheless, sometimes male Aussies can get distracted during training. Their puppy-like style and playfulness might mess with their focus during their training sessions.

Girls are harder to convince, but they perform amazingly well in training classes. In fact, they reach maturity earlier than males, and this reflects in how hard they concentrate.

But don’t let this bring you down. Males can be harder to train, but in no way is it impossible. The Australian Shepherd dog breed is extremely intelligent. They love to please their humans. Combine these two traits together, and you’ll have a perfectly trainable dog.

Potty training and socialization should be your first steps in the training world. 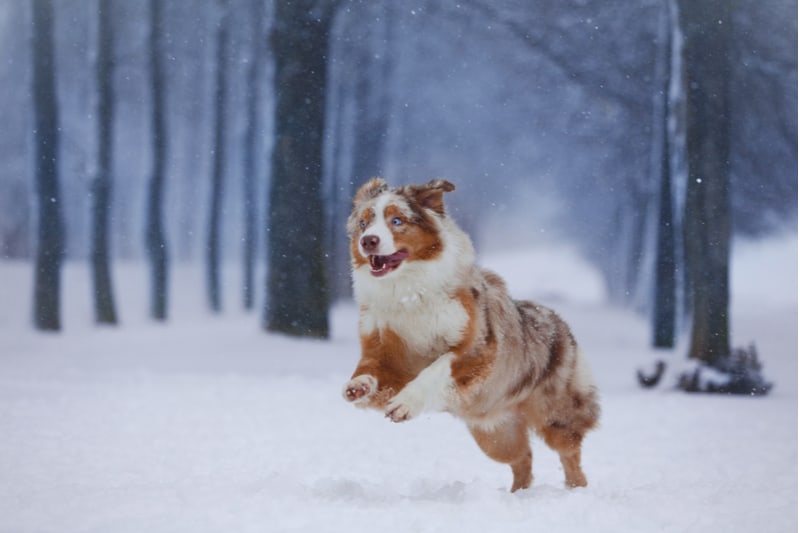 Temperaments have to differ from one dog gender to another. Otherwise, we would have dogs that all act the same. The Australian Shepherd is no exception here.

Male Aussies are more affectionate and stick to their owners more than girls. If you’re gone for a long time, they will truly miss you. Males are loyal and more reliable too!

Male Australian Shepherds are also a bit loud. Since they’re so playful, even adult Aussies will act like puppies. However, it’s much easier to handle adult dogs than puppies. If you’re wondering if the time when puppies will get easier will ever come, then you should check this out!

Both genders LOVE food, but males love it even more (Hence the easy training part).

It’s not uncommon to see males fighting for territory. That’s why if you’re thinking of getting two Australian Shepherds, don’t end up choosing the same sex. Male puppies get along much better with female puppies.

As for the girly side, female Aussies are more relaxed and sensitive. They have a personality that’s a delight to work with. Since the girls mature earlier, they will be better organized. These ladies like to keep a strict schedule and become more reserved over the years.

Should I Get A Male Or Female Australian Shepherd?

As you can tell, there are no major personality differences between female Australian Shepherds and their male counterparts. Both genders have wonderful personalities that make them fit companions and family members.

Choosing a male vs female Australian Shepherd is a matter of personal preference. Males and females look alike, but they do have some subtle differences.

So, the answer to your question of whether to get a male vs female Australian Shepherd can only be made by you.

A female Australian Shepherd tends to say “love me,” and a male says, “I love you.” 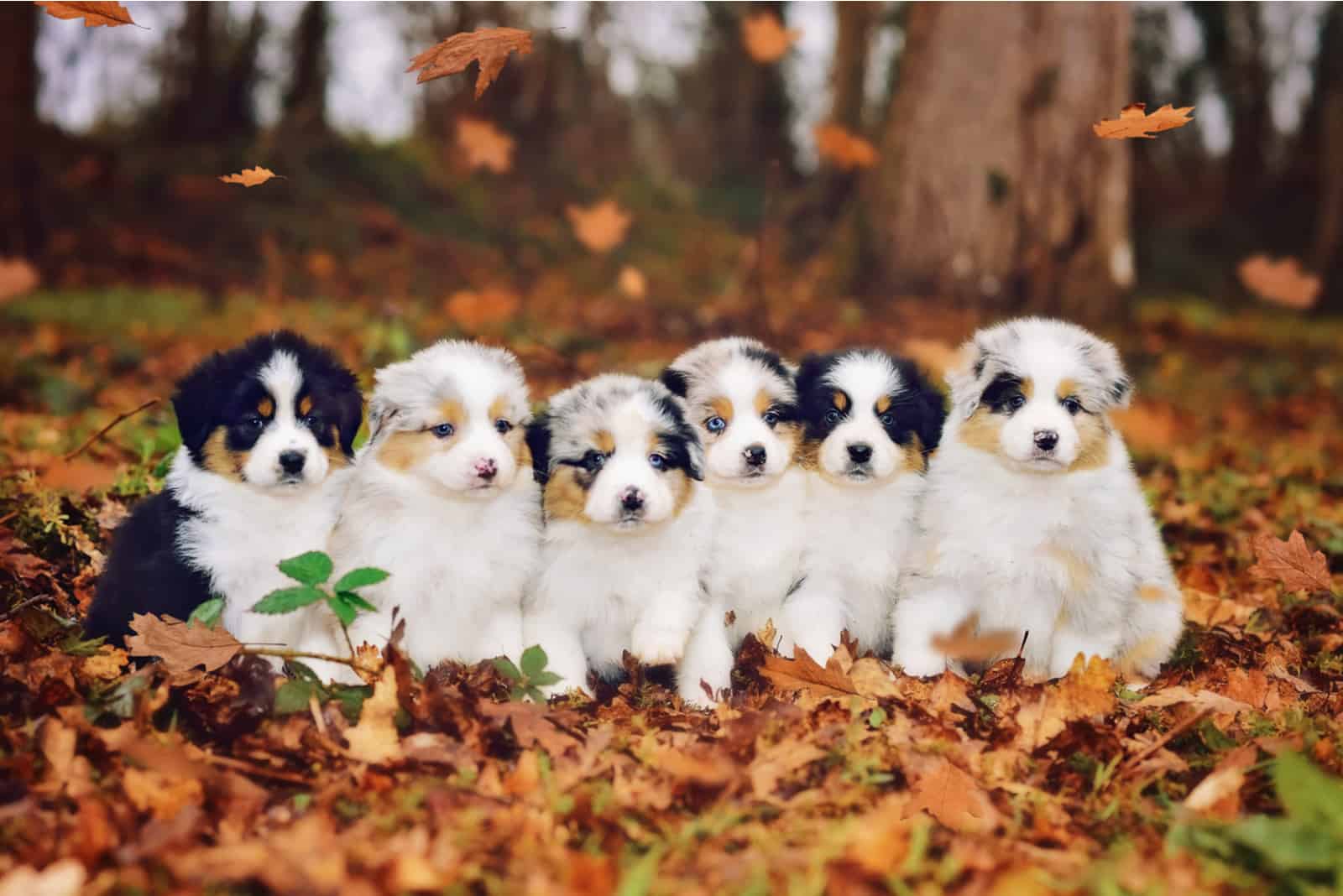 How much money do you need to save to get yourself a male or female Aussie Shepherd? The price depends on many factors like breeding, conformation, age, and gender.

Dogs that come from reliable dog breeders and have potential in dog shows will cost more than regular puppies from poor breeders (backyard breeders) with flaws and mediocre appearances.

As a rule, females cost less than males. Also, dogs that have been trained for work or therapy will cost more.

Of course, rescue dogs will only cost the amount that you are required to pay for adoptions.

Who Should Get An Australian Shepherd Dog? 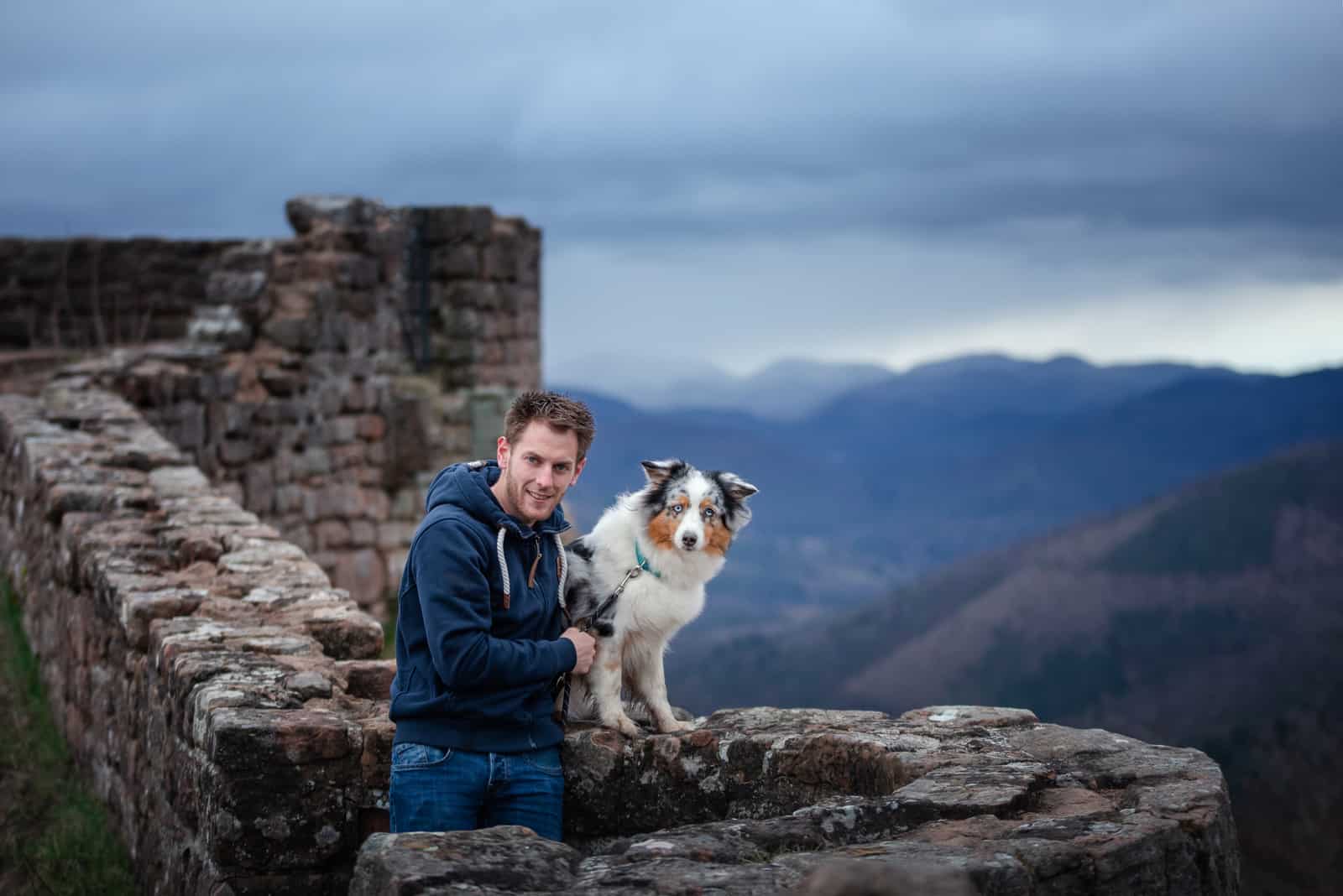 Anyone who finds their pros good for them and the cons not so important.

These high-energy, playful, and loyal pups are true sweethearts. Many pros for this breed include their trainability, eagerness to please, intelligence, loyalty, affection, adaptability to different climates and surroundings, and compact size.

Their list of cons is slightly smaller, but it shouldn’t be ignored. This breed’s biggest problem is its high energy level. These dogs need lots of exercise, or neither of you will be happy.

They have a double coat, so their undercoat sheds a lot. This means your home will never look the same after an Aussie comes to live with you.

Australian Shepherds have two-colored eyes that can sometimes cause all sorts of problems like cataracts, detached retina, etc.

As long as you’re aware of what kind of dog breed this is, which advantages and disadvantages the males and females have, you’ll be fine hanging out with an Australian Shepherd. 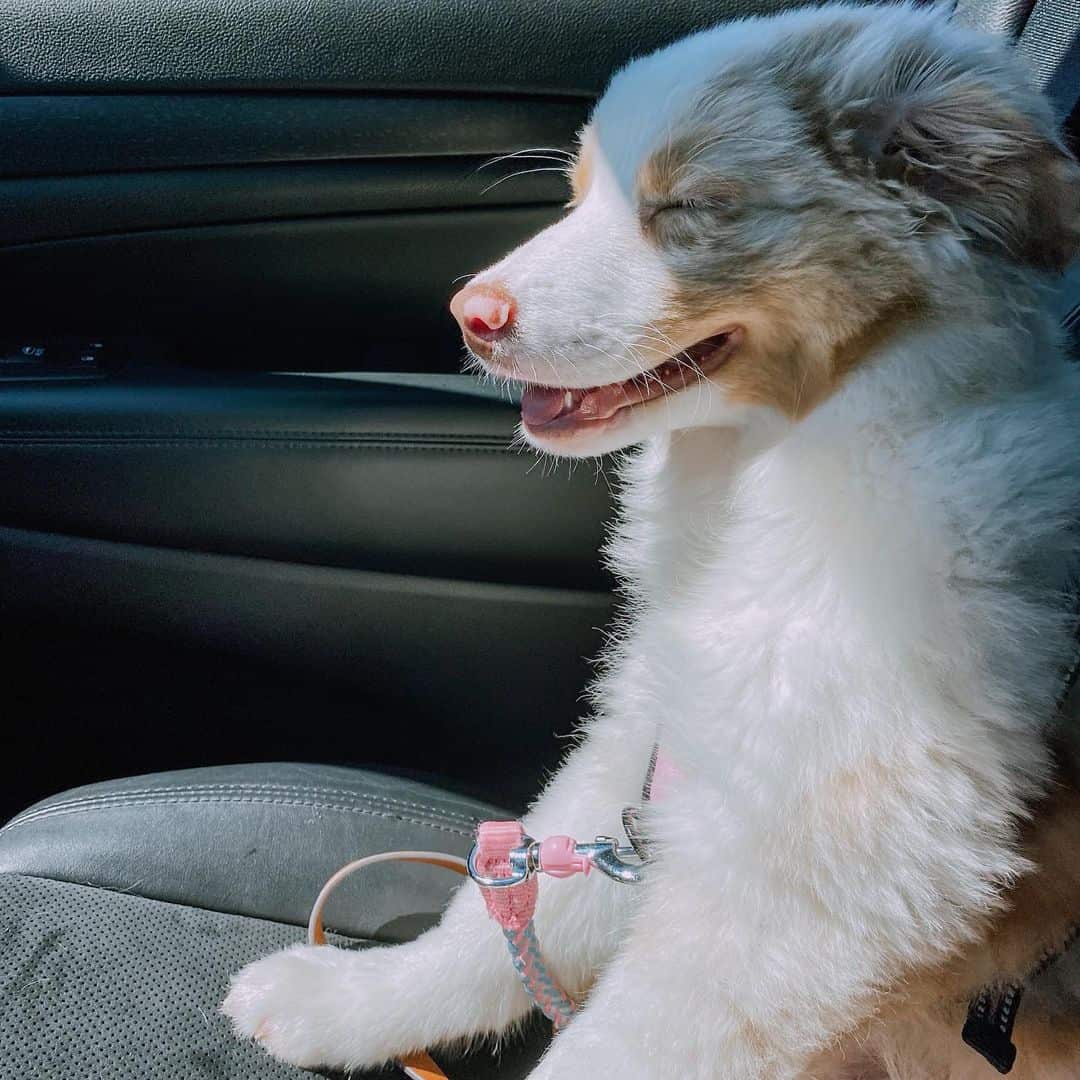 By all means, do get an Aussie Shepherd! Find a cool name, shower the pup with love!

Who are we to tell you are male vs female Australian Shepherds better?

You’re picking out a life-long companion. Be careful who you let inside your heart.

[…] next breeder on our list is Rebecca Beckrich, and her Australian Shepherd dogs. She also breeds Miniature American Shepherds – a dog that looks like a small Aussie […]

15 Anatolian Shepherd Mixes That Will Truly Amaze You

[…] Overall, Australian Anatolian Shepherds are sweet-looking pups that are significantly larger than the Aussie mom or dad, but pretty […]

Are Australian Shepherds Good With Kids? A Guide For Parents

The 22 Healthiest Dog Breeds – Dogs Who Live Long And Prosper

[…] both male and female Australian Shepherds are affectionate, friendly, outgoing, and protective of their loved ones – all of which are […]