Have you recently become the lucky parent of a Havanese? You feel it is the best dog for you, and you are thrilled to watch him grow up. He is so cute and fluffy and small.

Now, you are wondering, How big will he grow? Well, let me say that he will stay very adorable and petite even as an adult. But, you can track his progress with the help of this Havanese growth chart.

Personally, I can not resist this dog. I can see why he was so beloved for many centuries. He had a special place in aristocratic circles in Spanish courts.

The Havanese got its name from the city of Havana, in Cuba. It is the only native Cuban breed. He is known under two more names – Havana Silk Dog, and Spanish Silk Poodle. Breeders believe that he is a descendant of Bichon Frise and Maltese dog breeds.

A Havanese has many big-dog traits packed in a small size. He is as smart as a Border Collie, an excellent companion as a Bernese Mountain Dog, and an attentive watchdog as a German Shepherd or any kind of Mastiff such as a Great Dane – but without barking.

A Havanese is also as stubborn as a Boxer or a Bulldog. And, he has his gentle side, being a perfect therapy dog like a Labrador Retriever, for example.

All these traits make him very adorable and irresistible. Now, let’s read more about the way this dog develops and grows.

Contents show
1 Havanese Growth Chart
1.1 Why Does The Havanese Puppy Weight Chart Matter?
1.1.1 Formula For Calculating Potential Weight
2 Havanese Developmental Stages
2.1 From Birth To Two Weeks Old
2.2 From Three Weeks To Twelve Weeks Old
2.3 From Four Months To Nine Months Old
2.4 From Ten Months To Eighteen Months Old
2.5 Adult Havanese
3 Which Factors Affect How Big A Havanese Will Get?
3.1 Biological Factors
3.2 Nutritive Factors
4 How Long Does It Take For A Havanese To Be Full Grown?
5 Do Havanese Come In Different Sizes?
6 To Sum It Up 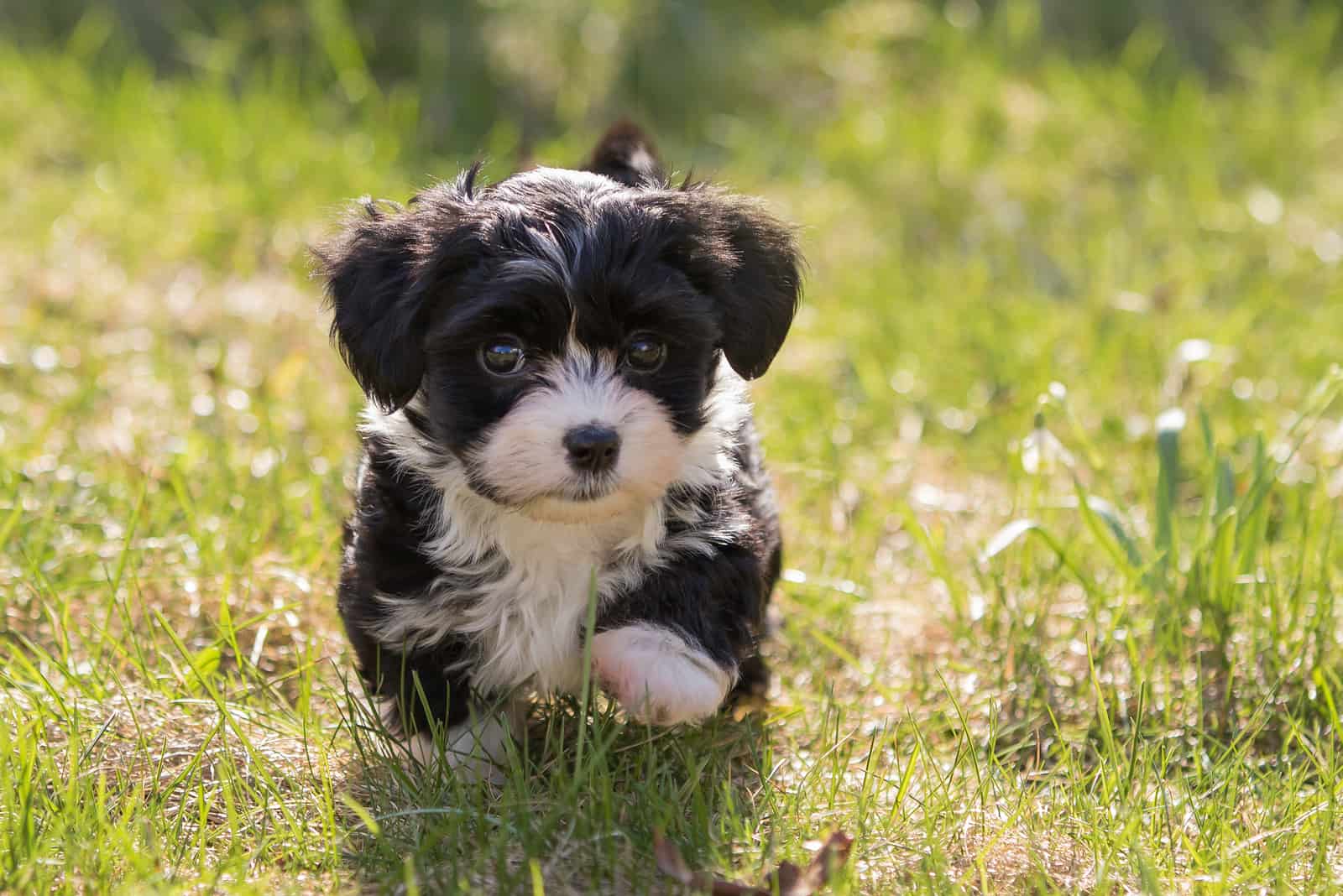 Are you wondering how to use a weight chart to predict the rate of a puppy’s growth?

On the left side, there is a column with the puppy’s age deployed over months of age. In the right column, there are approximate weights that are expected for the corresponding month.

You should simply look for the age category that your dog is currently in and see if he fits into the average weight. This tool helps you to know what to expect each month of development.

Why Does The Havanese Puppy Weight Chart Matter?

The Havanese growth chart is a useful tool to estimate whether your dog is on the right track with his development.

There is a specific growth chart for each dog breed. This means that these numbers represent average weights for a dog breed in certain developmental stages.

There can be deviations from the standard for an individual dog. However, this is not something you should worry about unless those deviations are significant. Then, you should probably check if there is some issue that your dog is dealing with. This would mean that it is time to visit the vet.

There is a growth curve for each dog. A dog’s weight should be aligned with this curve. This means its weight should increase in a regular manner. If a dog falls off the curve, it could be an indicator for a checkup.

If you are eager to know how big your puppy will get when it reaches the full size of an adult dog, there is a formula for that. A weight calculator gives you the potential adult weight for an individual dog.

There is also another formula. The first step is to divide the current dog’s weight by his current age, expressed in weeks.

The second step is to multiply that result by 52. The result is the expected weight of an adult dog (52 represents the number of weeks in one year). 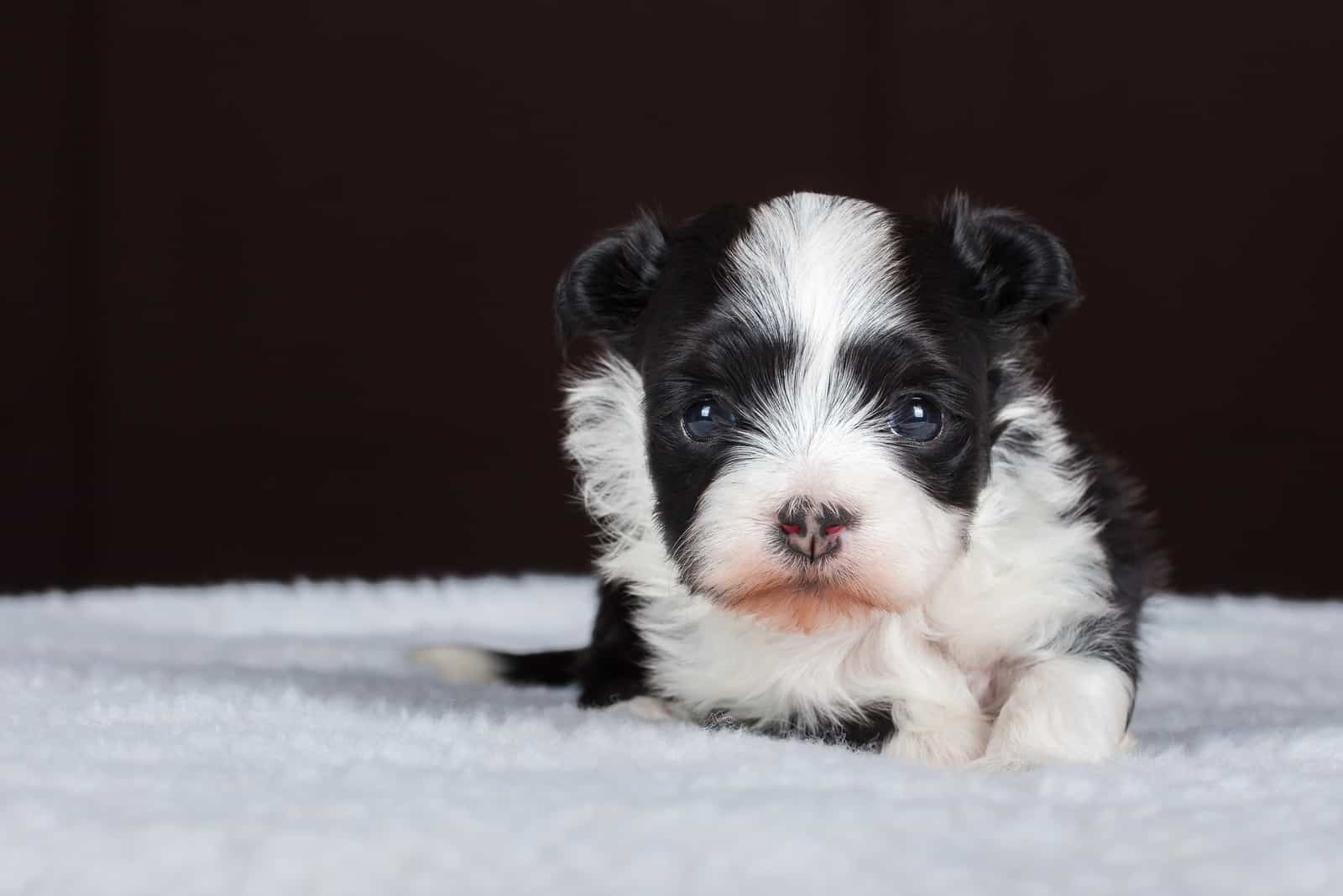 A dog’s developmental rate is not continuous or uniform all the time. There are periods of rapid development, and periods where you may think nothing is happening. You can see this best through the Havanese growth chart.

You should not worry about it as it is all natural and part of the process. But, it is good for you to get to know the characteristics of every developmental stage, so that you know what to expect.

From Birth To Two Weeks Old

Newborn Havanese puppies weigh approximately four to five ounces in their first few days. These are very small dogs. However, this is not surprising because little dog breeds weigh less in every stage of development, just like large breeds weigh more.

Right after birth, puppies are almost helpless. They are mostly lying beside their mother due to the fact that their eyes are still closed and they still do not have enough strength.

Puppies depend on their mother because she feeds them with her mother’s milk. Consuming mother’s milk makes them gain strength. Mother’s milk is rich with nutrients, and this is the best way for weight gain during those first few days of the puppy’s life. It is possible that a puppy will double its weight during its first two weeks of life.

This is a period of rapid growth for your Havanese puppy, which means a lot of changes in a short timespan. You can check the average values in the Havanese growth chart.

There will be a significant weight gain at about the 8th week. That is the period when the dog is transitioning to adult dog food.

After that, we are stepping into the 9th week. From the 9th week to the 12th week, a Havanese will weigh from three to four pounds on average. This means that the dog gains almost a pound in a month.

This period of half a year will also be a period of major weight gain and growth.

You should remember that this period is the last period of rapid and major growth before the dog reaches full size.

By the 10th month, Havanese puppies often reach their full height, and are often done with growing. Of course, there are exceptions to this average. Some larger dogs of this breed can grow further until the end of the first year of their life.

After the dog has reached his adult height, he will not grow anymore. There is a possibility of gaining a little more weight, but this is not recommended as it can be hard to lose fat later.

A Havanese is considered an adult by the end of the first year of its life. At this point, the dog should already be eating adult food. From now on, he should not be growing anymore. There is a possibility of gaining weight.

Small dogs such as Havanese, Chihuahuas, Dachshunds, Cocker Spaniels, Yorkshire Terriers, Pomeranians, and certain Poodles will not grow big or gain much weight even as adults.

Which Factors Affect How Big A Havanese Will Get? 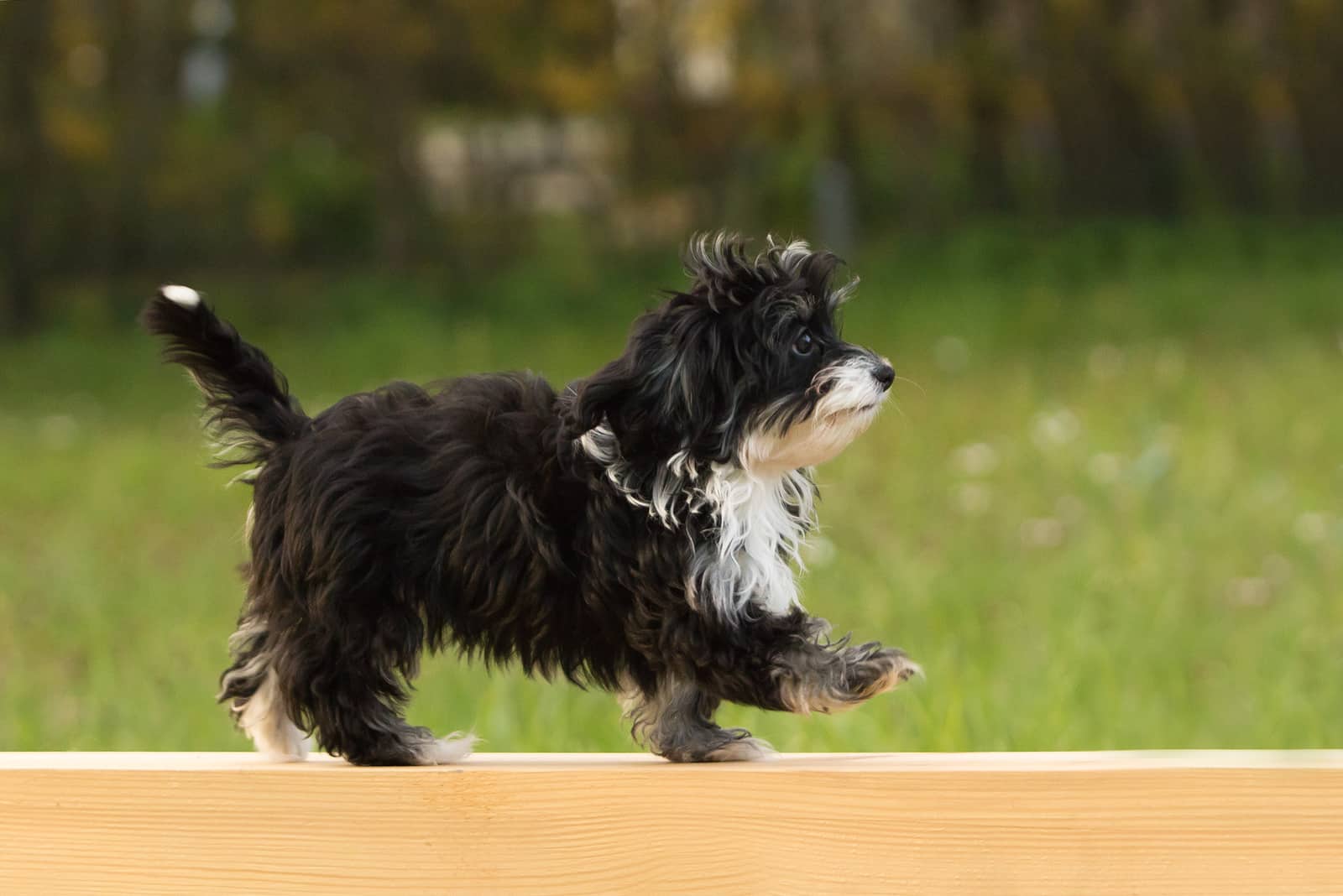 Most important factor that determines the potential size of a Havanese puppy is genetics. Most breeders are aware of how big of an impact this factor has on how big Havanese gets.

Besides genetics, gender or sex also has a big impact on a dog’s size, and that is for the benefit of a male dog. Female Havanese, as in most other breeds, would be smaller in size and weight than their male counterparts.

Many believe that nutrition has a major impact on growth rate. That is not true. Yes, nutrition is very important. It affects lifespan, for example, and determines the quality of life and overall well-being. But, it is highly unlikely that the amount of nutrients will make your dog grow bigger. It can only make him fatter.

On the other hand, if a dog does not get enough nutrients, it certainly will disrupt its growth. Malnourishment can lead to health problems.

How Long Does It Take For A Havanese To Be Full Grown? 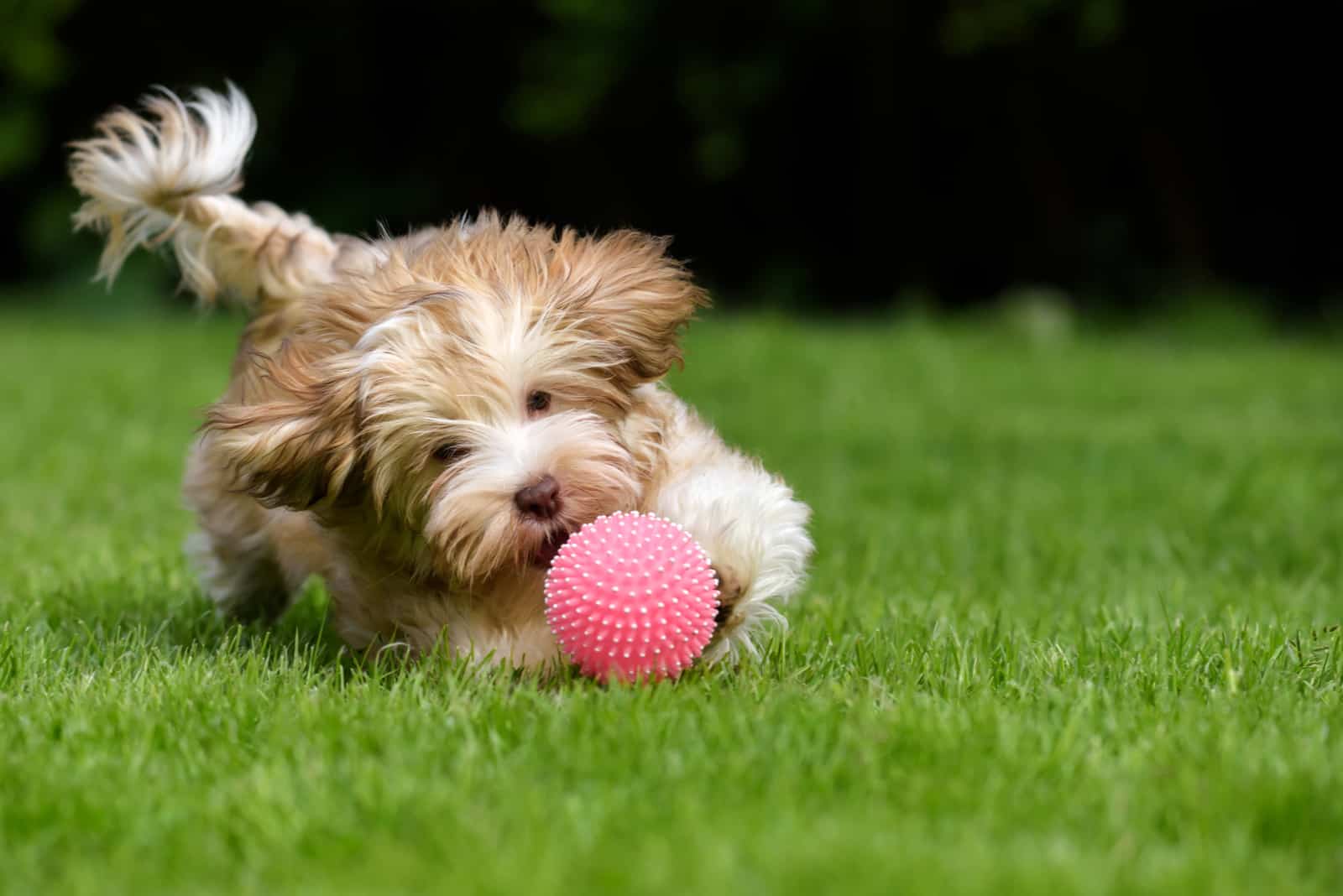 We can read from the Havanese growth chart that it takes approximately eight to ten months for a Havanese puppy to reach its full size. The bloodline plays a major role in the growth rate of an individual puppy.

Some dogs reach full size earlier, while some reach it later. But, without exception, every puppy will reach adult size by the end of the first year of its life. The Havanese is considered a toy breed, and toy dogs reach their full potential earlier than larger breeds.

The American Kennel Club (AKC) states that fully-grown Havanese weigh between seven and 13 pounds. Their height is between 8.5 and 11.5 inches at their shoulders.

Do Havanese Come In Different Sizes? 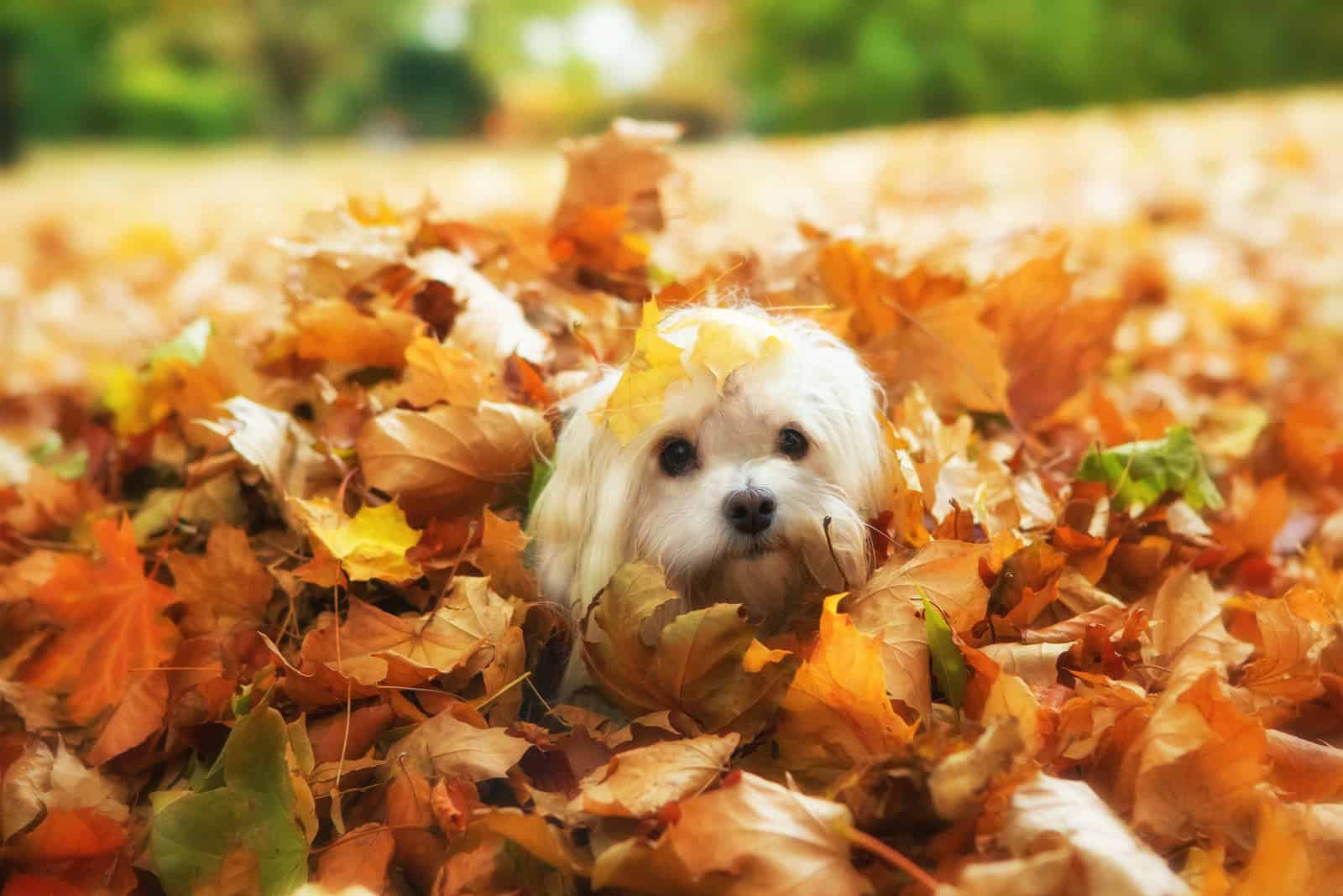 It is not really common to see a Havanese dog that is out of the standard size of this breed. Havanese are purebred dogs, and therefore, almost all individuals are within breed gabarits. Genetically, these dogs are part of the small-dog group.

Some breeders go for teacup varieties of this breed. The reason for that is that miniature dogs are very popular now. The standard Havanese growth chart does not apply to this variation.

This way of breeding comes with a price. These dogs are not very healthy, and they have a lot of complications that require the intervention of a veterinarian.

To Sum It Up

We have found out what developmental changes a Havanese puppy goes through until he finally hits his full size. To predict the growth rate in certain stages, there is a useful tool for that – the Havanese growth chart. But, remember to take those estimations as they are – predictions that can only be approximately precise.

Whether you are fond of larger and mightier dogs such as Doberman, Greyhounds, Newfoundlands, or the unique Siberian Husky, I am sure that the cute little Havane got you, too.

His silky coat and loving personality sweep you off of your feet, and you just have to love him.

READ NEXT:
How Much Does A Havanese Cost: The Complete Expenses Guide
The 30 Cutest Havanese Mixes In Existence – Gotta Pet ‘Em All

25 Havanese Colors That Will Blow Your Mind

[…] RELATED: Havanese Growth Chart: How Big Can This Aristocrat Dog Get? […]

[…] sweetheart from Cuba will not grow big (you can check this in the Havanese growth chart), but still make sure you feed him with the best food to prolong his health, and at the same time, […]

Havapoo Growth Chart: How Big Is A Full-Grown Havapoo?

[…] the Havapoo growth chart, we’ve created special growth charts for both its parent breeds, the Havanese and the Poodle. This can help point you in the right direction when it comes to figuring out how […]

The Best Havapoo Breeders You Can Find In The USA (2022)!

[…] mean, a Havapoo can’t grow big, just like a Havanese (you can check out the Havanese growth chart if you want to be […]