When picking out a family pet, many future dog owners want a dog breed suitable for apartment living.

Will it be a purebred pooch or a mixed breed dog? Does it have to be a non-shedding one, or are you fine with dog hair everywhere?

Will it be Cavapoo vs Maltipoo!

Both of these designer dog breeds are suitable for first-time owners. Cavapoos and Maltipoos are sweet, caring, and smart cookies. Soon enough, you’ll be scrolling through the Internet looking for a breeder having these pups.

But, before you make a decision, here’s what you need to know about Cavapoo vs Maltipoo, their similarities, and their differences.

They might be similar at first glance, but there’s so much more hiding behind every one of these breeds. 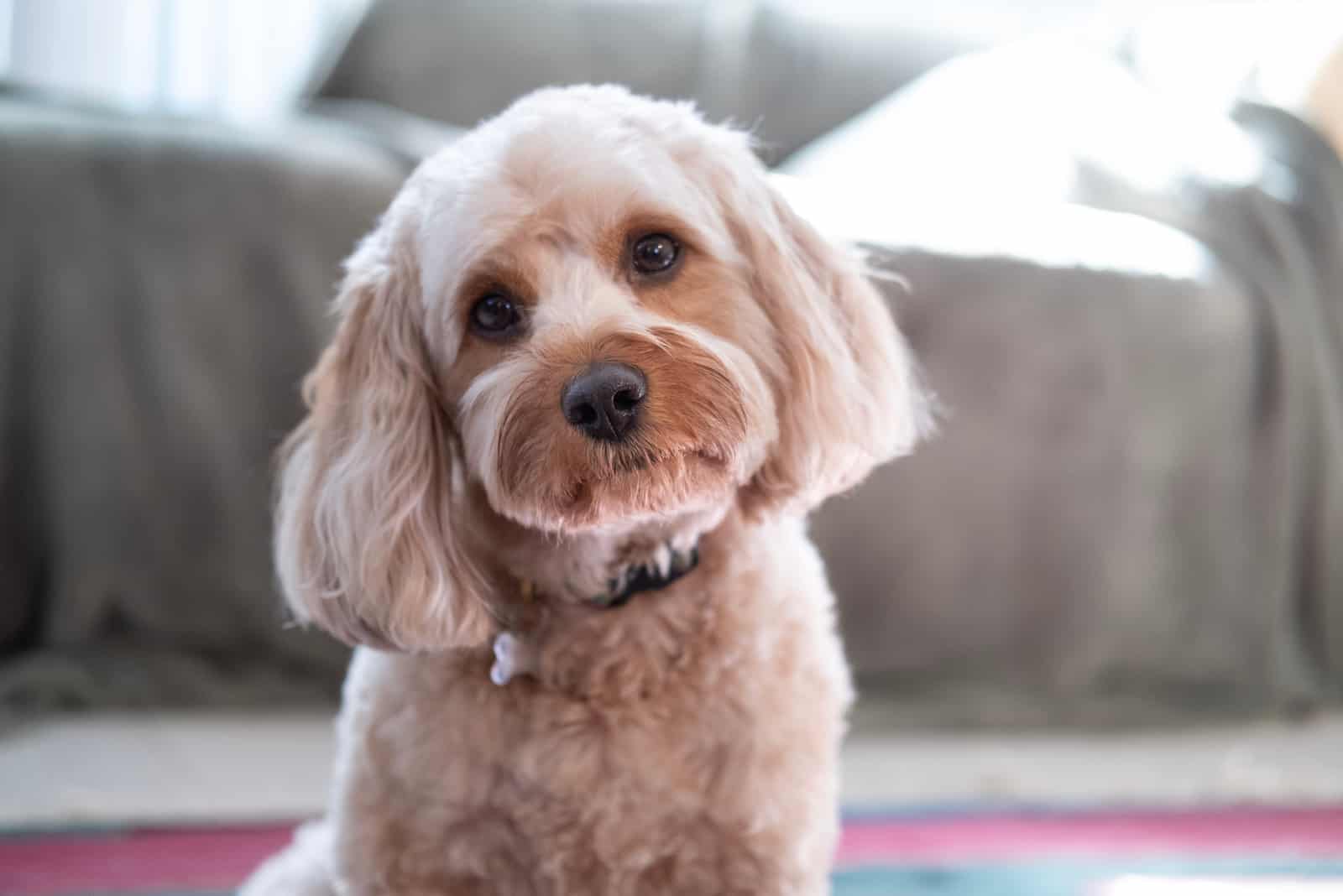 First bred in the 1950s, the Cavapoo has become a popular designer dog and a loving addition to any family. Back in the days, they were extensively bred in Australia, which is considered their origin country.

A Cavapoo, Cavoodle, or Cavadoodle is a mix between a miniature Poodle and a Cavalier King Charles Spaniel. This dog is larger than a toy Poodle, but it resembles the Cavalier because of its fur type. The coat can vary from silky to fluffy. Still, they’re considered low-shedding and hypoallergenic.

The reason why people love Cavapoos so much is their friendliness, which makes them the perfect pet for families, even those with small kids and pets. Cavapoos are adorable fluff balls that are quite intelligent and eager to learn. All training, including obedience should be a piece of cake.

Cavapoos are one of the friendliest and sweetest dog breeds. They’re not only friendly to people, but to other pets, too. This is quite a rare trait to find among dogs.

Cavapoos are also loyal, loving, and don’t mind showing affection at all. They enjoy the company of people and other dogs. They make good therapy dogs, and seem to act more independent than Maltipoos.

One of the biggest advantages of this crossbreed is they’ve inherited the Poodle’s genes, meaning they’re not prone to shedding. Still, they’re prone to matting, so you better grab that grooming brush. Even though they’re not hypoallergenic like maltipoos, they’re one of the best Doodle breeds to own, especially if you’re suffering from allergies.

The most common coat colors are red, red and white, cream, black, apricot, tri-color (black, white, and tan), sable, and black and white.

An average Cavapoo can grow from 9 to 14 inches in height, and weigh from 6 to 14 pounds.

The lifespan of this small dog breed is relatively long, but a bit shorter than the Maltipoo’s. Cavapoos tend to live from 10 to 14 years. 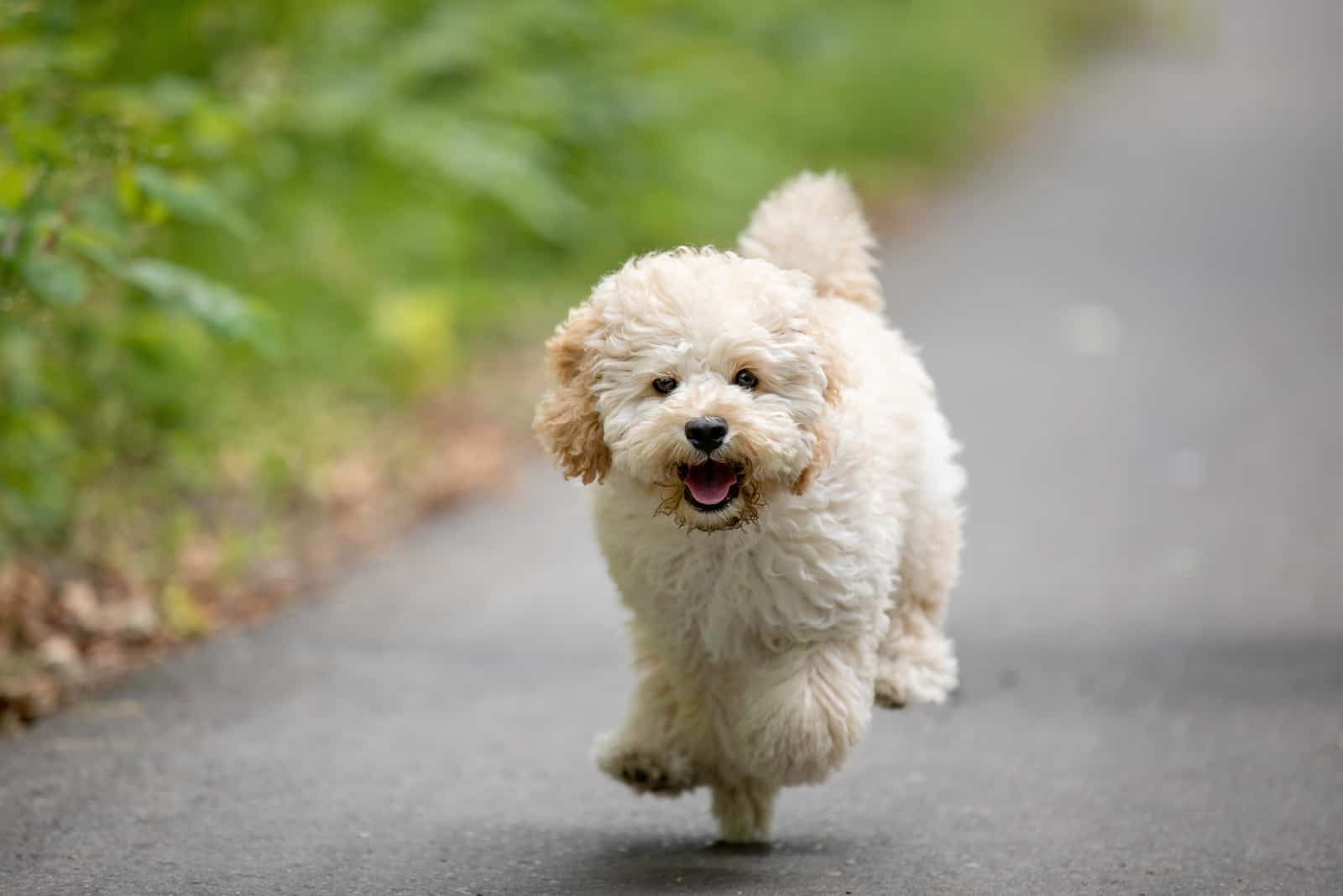 Their breed has been around since the 1850s, but Maltese dogs weren’t always popular companion dogs. For the past 20 to 30 years, their popularity grew. The whole point of breeding this dog breed was to have a happy little puppy that doesn’t shed or trigger allergies.

Maltipoo puppies, a mixture of Maltese and Poodle genes, are one of the sweetest little active dogs you’ll ever see. When you combine the friendliness of the Maltese and the intelligence of the Poodle, you get this affectionate and fun-loving pooch.

The Maltipoo’s coat is medium long. It’s soft and fluffy, and sometimes wavy or curly.

When you compare Cavapoo vs Maltipoo vs Cockapoo vs Labradoodle vs Goldendoodle, you’ll see that all these Poos have a similar coat type.
Maltipoos are loving dogs, and they ask for love and attention in return. They seem to be very dependent on their owners, and sometimes even clingy. They do make good companion dogs, but not for little children.

As you may already know, Maltipoos are hypoallergenic dogs since they come from two hypoallergenic breeds. The Maltipoo’s size varies from 3 to 20 pounds in weight, and they stand as tall as 12 inches.

Maltipoos have a slightly longer lifespan than Cavapoos, from 10 to 15 years.

Cavapoo Vs Maltipoo: What Are The Similarities? 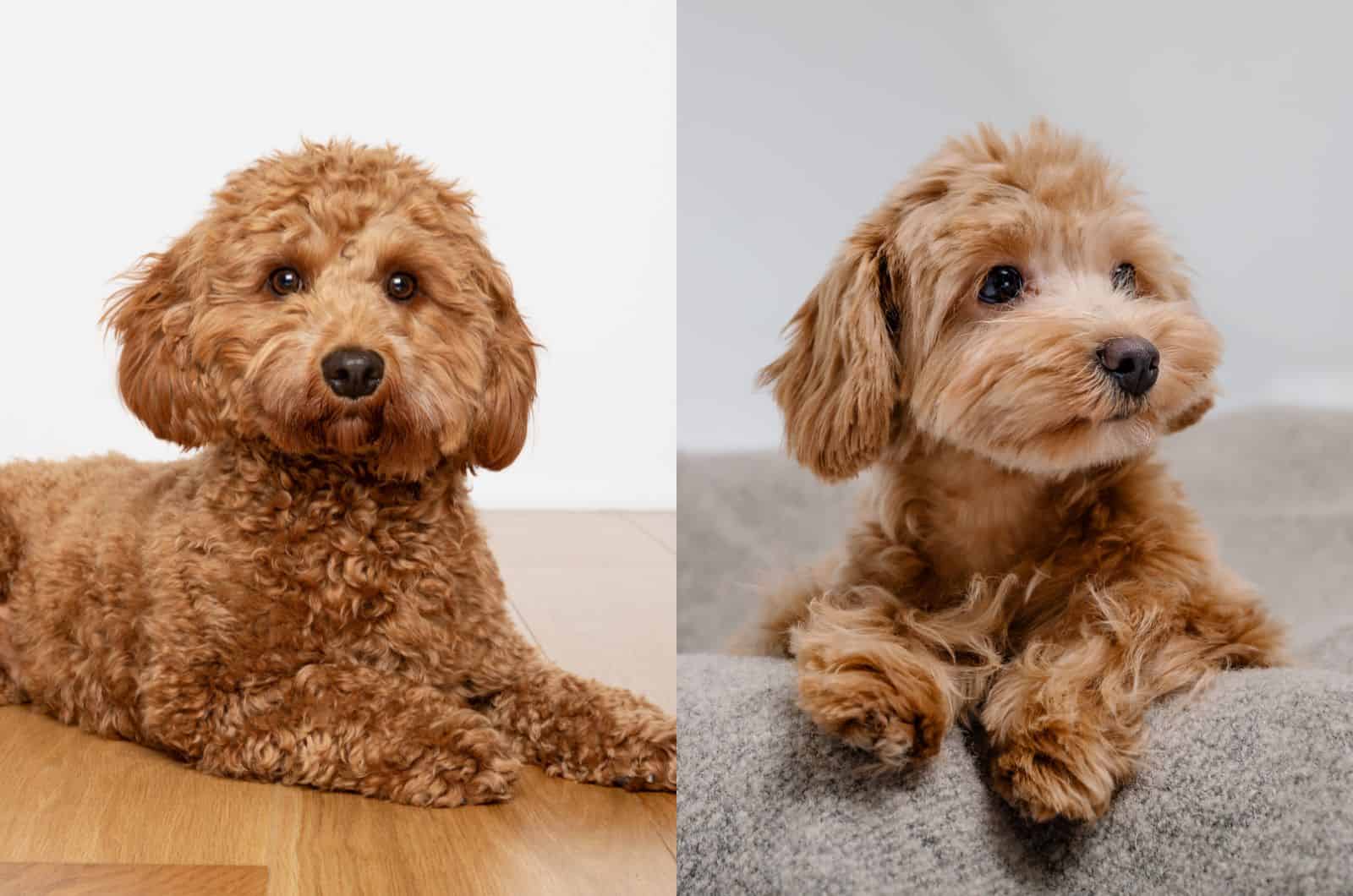 One of the biggest similarities of these two dog breeds is their general size, meaning their weight, height, and their complete stature. If we had to go into details, let’s say Cavapoos are slightly higher, and they weigh more than an average Maltipoo.

These adorable, cuddly dogs are friendly creatures ready to show you affection. They enjoy the company of humans, and love being around children. But, if you’re looking for a companion for your little ones, maybe you should go with a Cavapoo puppy as they’re considered therapy dogs.

Since both dogs are Poodle mixes, they will have a soft, short to medium and curly coat. And, yes, they are low-shedding dogs, often considered hypoallergenic.

With Maltipoos, there’s a 50% chance the puppy will have a straight coat since the Maltese has one.
As for the coat color, the Cavapoo usually sports the same color pattern as the Cavalier King Charles Spaniel, while the Maltipoo takes its coat color after the dominant parent traits.

When it comes to Maltipoo vs Cavapoo intelligence, they’re both very smart cookies, easily trainable, and eager to learn.

Since the Poodle parent is one of the most intelligent dog breeds in the world, the Cavapoo and the Maltipoo have inherited these traits.
Still, Cavapoos tend to be a bit harder to potty train, but with some patience and positive reinforcement, they will master this training.

Every dog that loves being around people and acts friendly is prone to developing separation anxiety. This can be an issue if you’re leaving your dog home alone for long periods of time. Cavapoos seem to take it better than Maltipoos, but make sure you don’t leave them alone for too long.

Cavapoo vs Maltipoo: What Are The Differences?

Maltipoo dogs are more yappy than Cavapoos. They seem to bark when excited, and they seem to be very vocal.
Cavapoos are not aggressive at all, and they make great family dogs.

In this battle of Cavapoo vs Maltipoo, the Maltipoo wins because their loud bark and more aggressive behavior than the Cavapoo’s will come in handy if you need a guardian. Well, technically, neither the Cavapoo or the Maltipoo is a great guard dog, but at least they will show their alertness.

Although they’re of a similar height, Maltipoos are more fragile than Cavapoos. They’re not that sturdy, and they seem to be more emotionally sensitive. You can scare them easily by sudden movement, and trigger aggressive behavior.

Maltipoos are also prone to being dropped, and since they’re a tiny breed, they don’t have that much strength to embrace the fall. So, better make sure young children don’t carry them around, and the bigger dogs are kept away.

Both of these hybrid dogs are allergy friendly and don’t shed that much. The Maltipoo is considered a hypoallergenic breed, like the Poodle parent.

But, the Cavapoo has only one hypoallergenic parent, the Poodle, and thus, sheds a bit more than the Maltipoo. Still, it does shed less than an average purebred Cavalier King Charles Spaniel, and it makes a good pet for people prone to allergies.

Since these are crossbreed dogs, there is a high risk of potential health issues coming from both parents.

The Cavapoo comes from the Poodle, and the Cavalier King Charles Spaniel comes from two dog breeds with different genetic makeup. As such, these crossbreed pups are prone to health problems like hip dysplasia, ear infections, Mitral Valve Disease, or Syringomyelia.

The Maltipoo is generally a healthy breed. Some might develop glaucoma, or Progressive Retinal Atrophy, Thyroid issues, dental issues, knee, joint, or liver problems. Because of their Maltese background, these pups are more prone to allergies and food sensitivities.

When it comes to Cavapoo vs Maltipoo life expectancy, there’s not too much difference. Most crossbreeds are healthier than some purebred dogs since they can take health benefits from both parent breeds.

The life expectancy of Cavapoos and Maltipoos depends on the medical history of the parents. Usually, the Maltipoo has a longer lifespan of 10 to 15 years, while the Cavapoo lives 10 to 14 years. 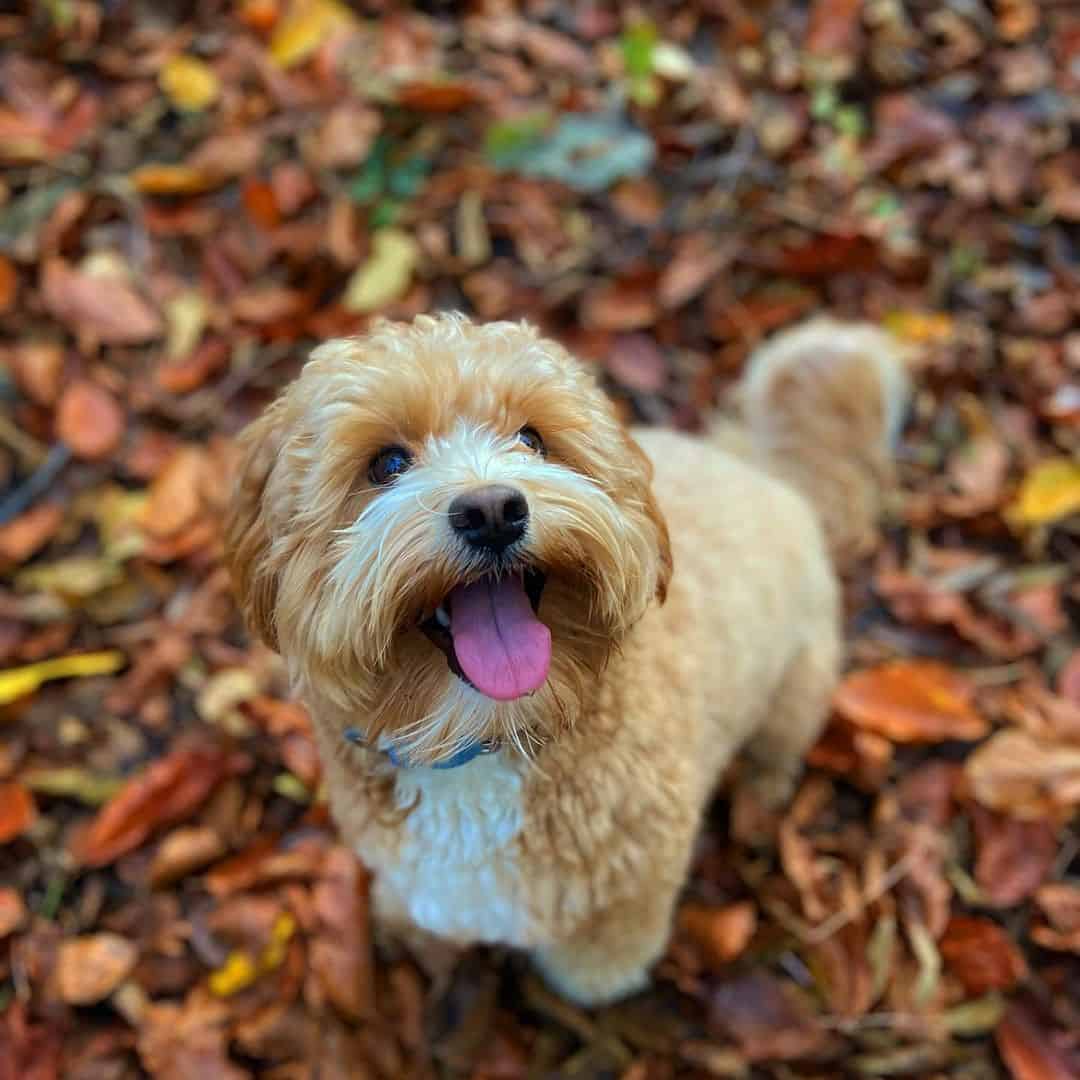 When it comes to deciding between Cavapoo vs Maltipoo, you should be aware that you’re choosing between two exceptional dog breeds.

Cavapoos and Maltipoos may be hybrid dogs, but they still have premium qualities.

You’ll love how adorable, cuddly, and caring these pups are.

At the end of the day, you won’t care if you’re owning a Cavapoo or a Maltipoo. The only thing that’s important is that you make a connection with your little fluffy ball.

Maltipoo Colors: Everything You Need To Know!

[…] Maltipoo dog is a mixed breed of a Poodle and a Maltese. They might be easily mistaken by the adorable Cavipoo, but they are their own unique brand of fun and […]

[…] Maltipoos are reputable breeders, located in Oxfordshire, United Kingdom. This family breeds both Cavapoos and Maltipoos. They are licensed breeders who have over 90 years of […]

[…] family-owned and operated breeding outfit specializes in producing high-quality Cavapoos and Maltipoos, as well as an occasional litter of Cavapoochon […]

The Top 7 Reputable Maltipoo Breeders In The UK Of 2022

[…] Maltipoos are reputable breeders, located in Oxfordshire, United Kingdom. This family breeds both Cavapoos and Maltipoos. They are licensed breeders who have over 90 years of […]

[…] some of these include Mini Aussiedoodles, Mi-Ki, Poodles, Cavapoos, Mini Labradoodles, Maltipoos, Snorkies, […]