Who doesn’t love sour cream? This dairy product can significantly change many meals!

With our pups begging us to have a taste of every piece of food we eat, most dog owners will be tempted to give a bit of sour cream to their four-legged friends.

Is this the smart thing to do? Can dogs eat sour cream, or will it cause health issues?

The answer to this question isn’t simple. For most people, a dog is not just a pet but a family member, just like any other.

We want the best for them, and what could go wrong with giving them a little bit of tasty human food?

So, what’s the deal with sour cream?

Here’s what you need to know if you’ve ever wondered, “can dogs eat sour cream?” 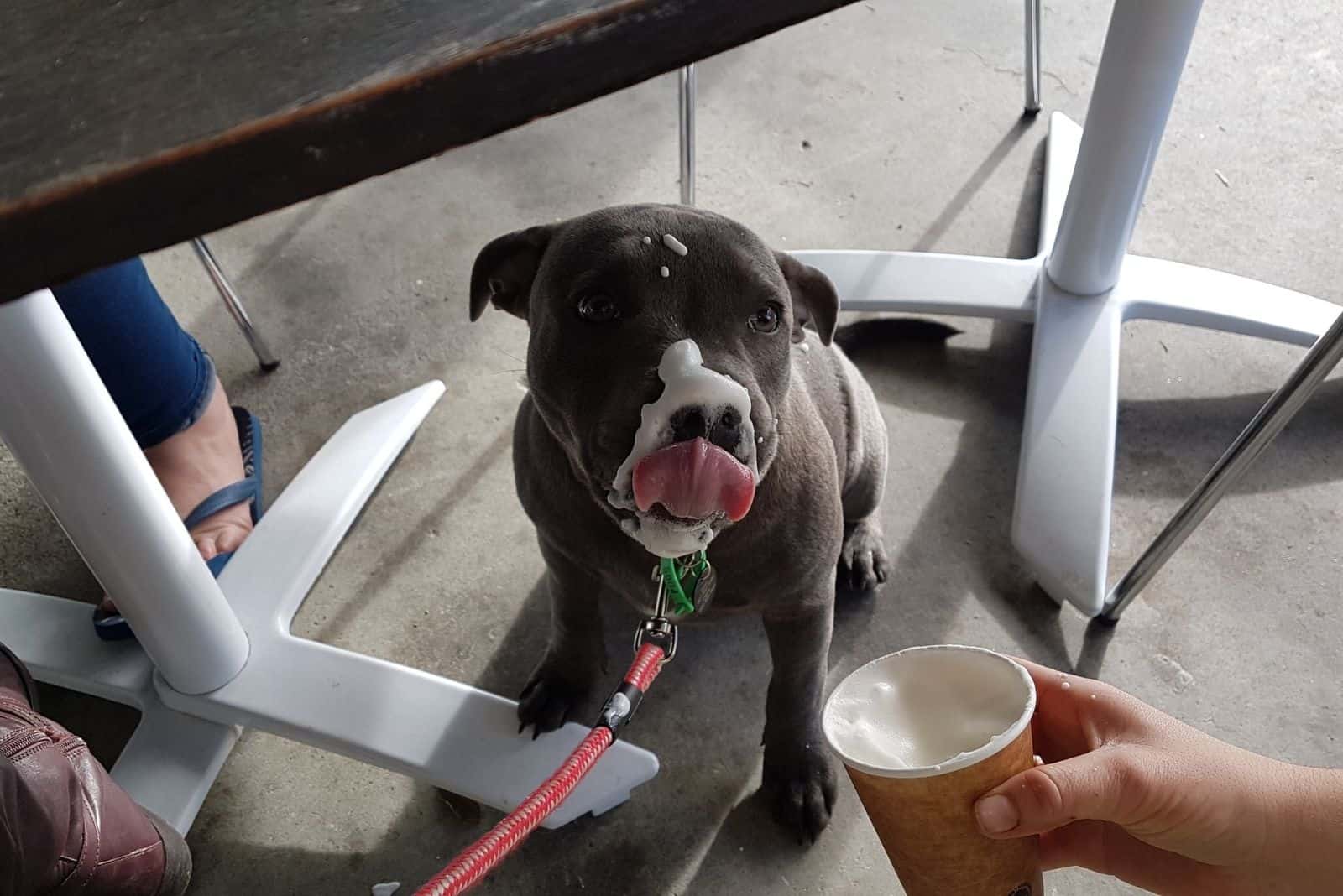 Overall, while sour cream isn’t the most nutritious food you can give your dog, there isn’t anything in it that’s deemed toxic.

Don’t worry if your pooch eats small amounts of sour cream, as he probably won’t experience any problems.

This dairy product is very high in saturated fat and doesn’t contain a high level of vitamins and minerals.

While nothing will happen if your pooch eats it in moderation, it can result in significant weight gain if consumed regularly.

Because of this, you really shouldn’t give your dog sour cream intentionally, and it shouldn’t be a part of your dog’s diet.

It doesn’t have any health benefits for your pup – in fact, it’s quite the opposite.

Still, your dog won’t experience any health problems after having just a bite. Just don’t let him eat it in large amounts, and he’ll be fine. 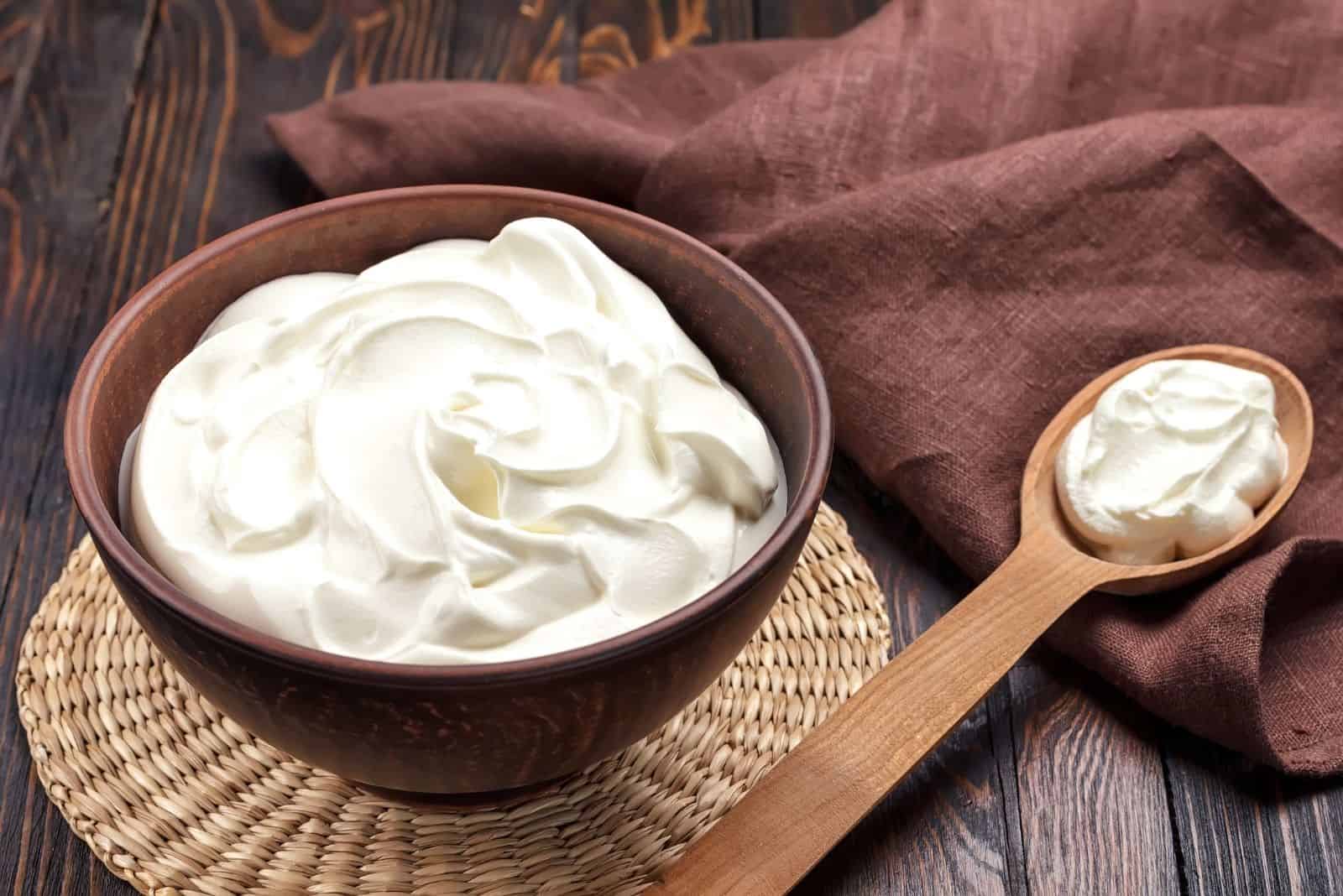 Sour cream is a fermented dairy product made with the help of specific bacteria such as L. lactis and B. bifidum.

In most cases, these bacteria are destroyed when the sour cream is processed.

On a few occasions, though, some manufacturers prefer to keep them for the added probiotic qualities.

The nutritional value of sour cream depends on the specific brand, as well as the fat content.

However, if we were to look at the median value, a spoonful of sour cream contains:

• Less than one gram of carbohydrate and protein

As you can see, there is nothing really beneficial for your dog in sour cream. 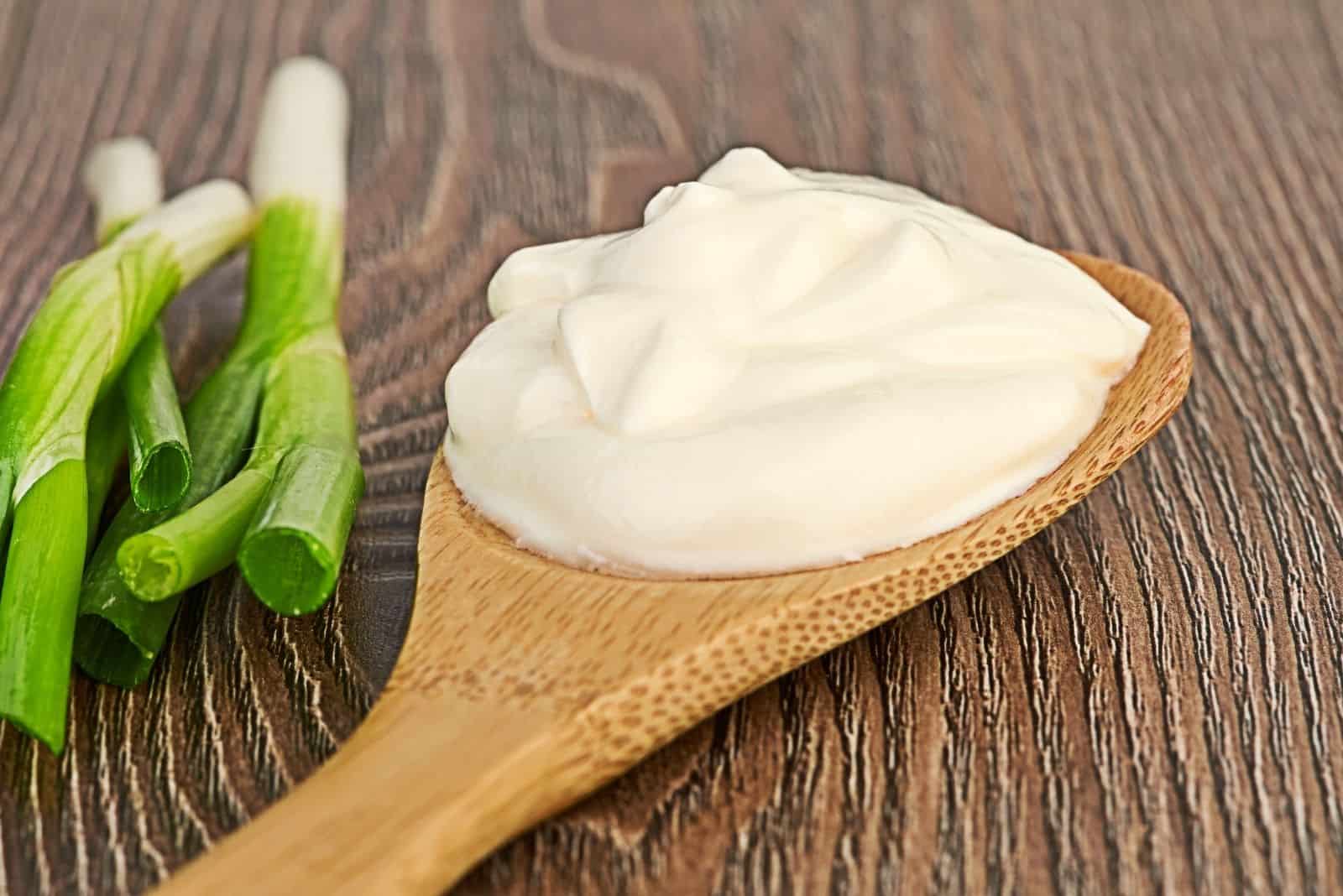 As you’ve read above, just one tablespoon of sour cream contains 23 calories. If, by chance, your pup eats an entire cup, he’d take in 444 calories.

In general, healthy dogs should take in between 25 and 30 calories per pound of body weight.

For a dog like a Golden Retriever, the daily intake should be around 1,500 calories.

Just by eating a cup of sour cream, your Golden would’ve already eaten almost a third of his daily calorie absorption without consuming anything valuable.

Excess calories are never good for dogs, as they can quickly become overweight.

This is especially true for older or fixed dogs who are generally less active. Overeating can even shorten a dog’s life span!

To make matters worse, 90% of these calories come from fats, and about 60% of that is from saturated fats.

Saturated fats are considered the ‘bad’ fat, and they increase cholesterol levels in your pup’s bloodstream.

As a result, your dog would be exposed to an increased risk of many health problems, most notably cardiovascular disease and obesity. 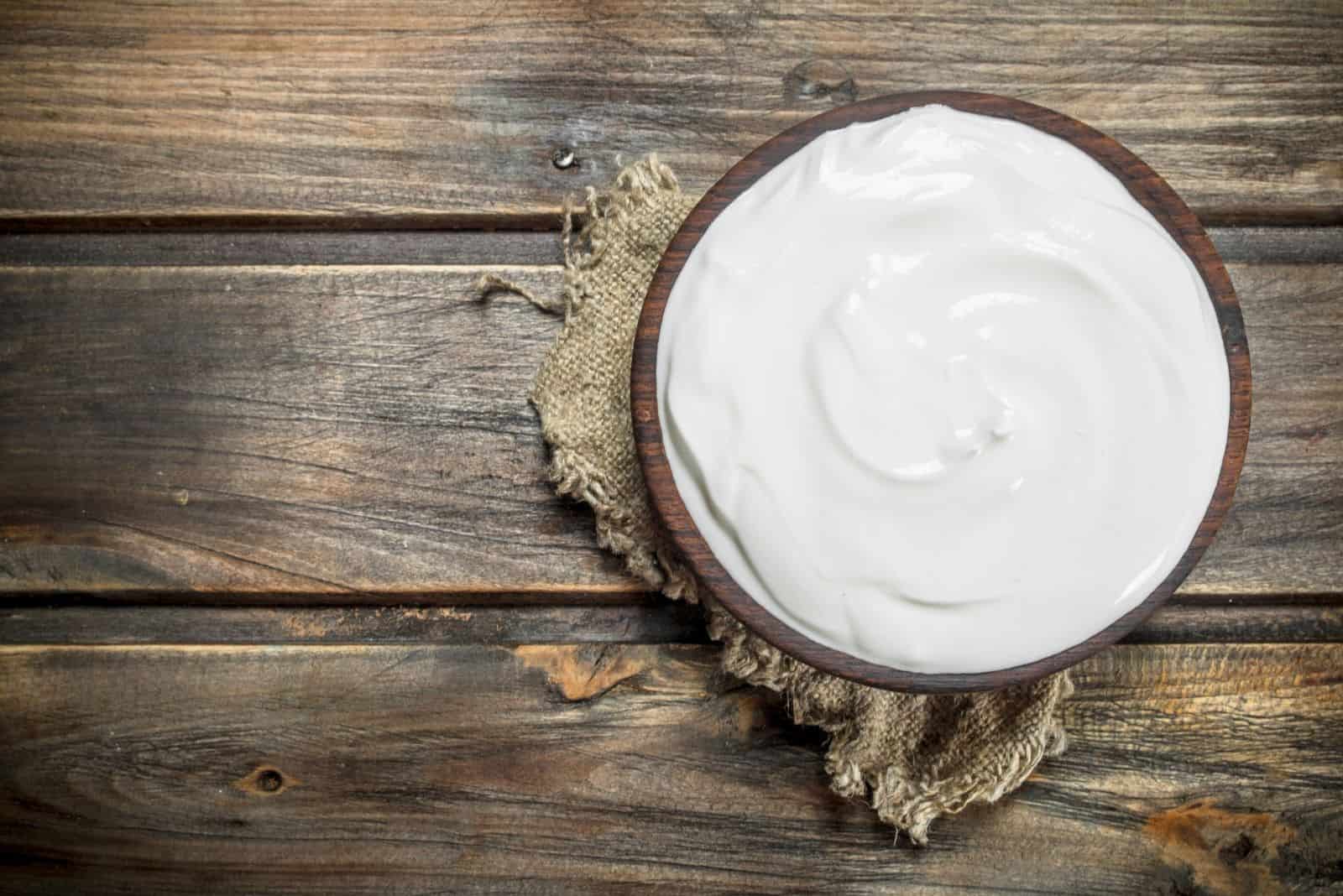 Excess fat is never good for your dog. Canines aren’t accustomed to eating dog food with high amounts of fat, so any meal with too much fat can cause them harm.

Some of the issues related to eating meals with a high-fat content include weight gain, heart problems, and inflammation of the pancreas (pancreatitis).

Don’t think that feeding your dog a fat-free sour cream is any better. This type of sour cream contains tyramine, an ingredient that many professionals believe to be linked to irritable bowel syndrome.

Also, fat-free sour cream contains gums as a flavor booster. These can also cause plenty of issues in a canine’s digestive system.

To top it all off, even fat-free sour creams contain around 0.5 grams of fat per 50 grams of the product.

In other words, even this type of sour cream has some amount of fat, no matter how small it may seem. 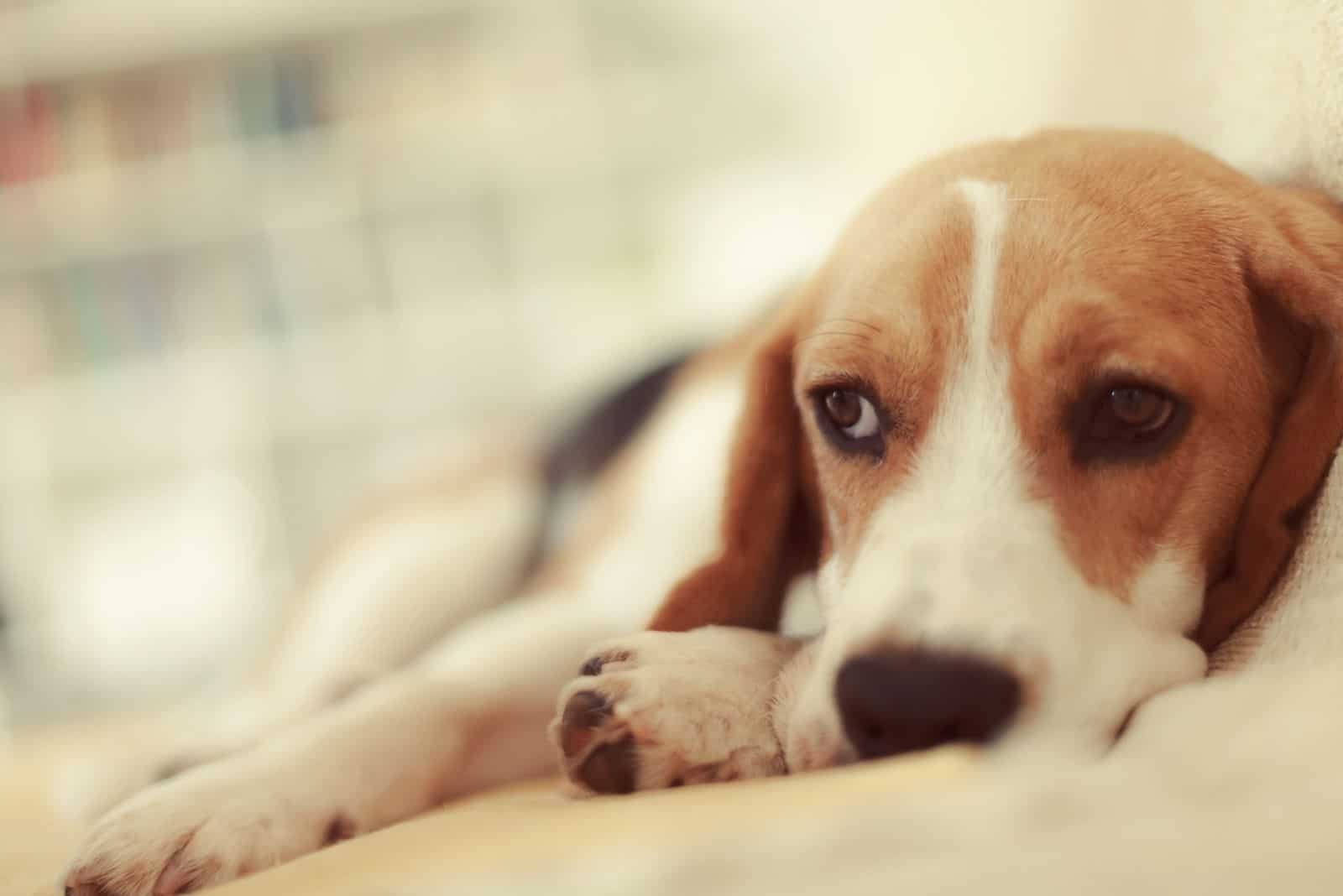 Finally, we’ll touch upon lactose, a type of sugar that milk and dairy products contain.

Many dogs won’t experience any issues after consuming lactose. However, this sugar is known to cause intestinal distress in both humans and dogs.

Like some humans, some unlucky pups will experience terrible issues after eating anything with just a tiny bit of lactose.

This is because their digestive system doesn’t contain the enzymes necessary for lactose digestion.

Consuming dairy products such as whipped cream, plain yogurt or ice cream can cause diarrhea, vomiting, abdominal pain, bloating, and many other severe symptoms.

Since sour cream is a dairy product, it also contains lactose, which can be bad for dogs with lactose intolerance.

Sour cream with probiotics might cause fewer issues than many other dairy products.

However, if your dog is lactose intolerant, it would be best not to risk it. Any dairy can irritate such a pup’s gastrointestinal tract and leave him with an upset stomach. 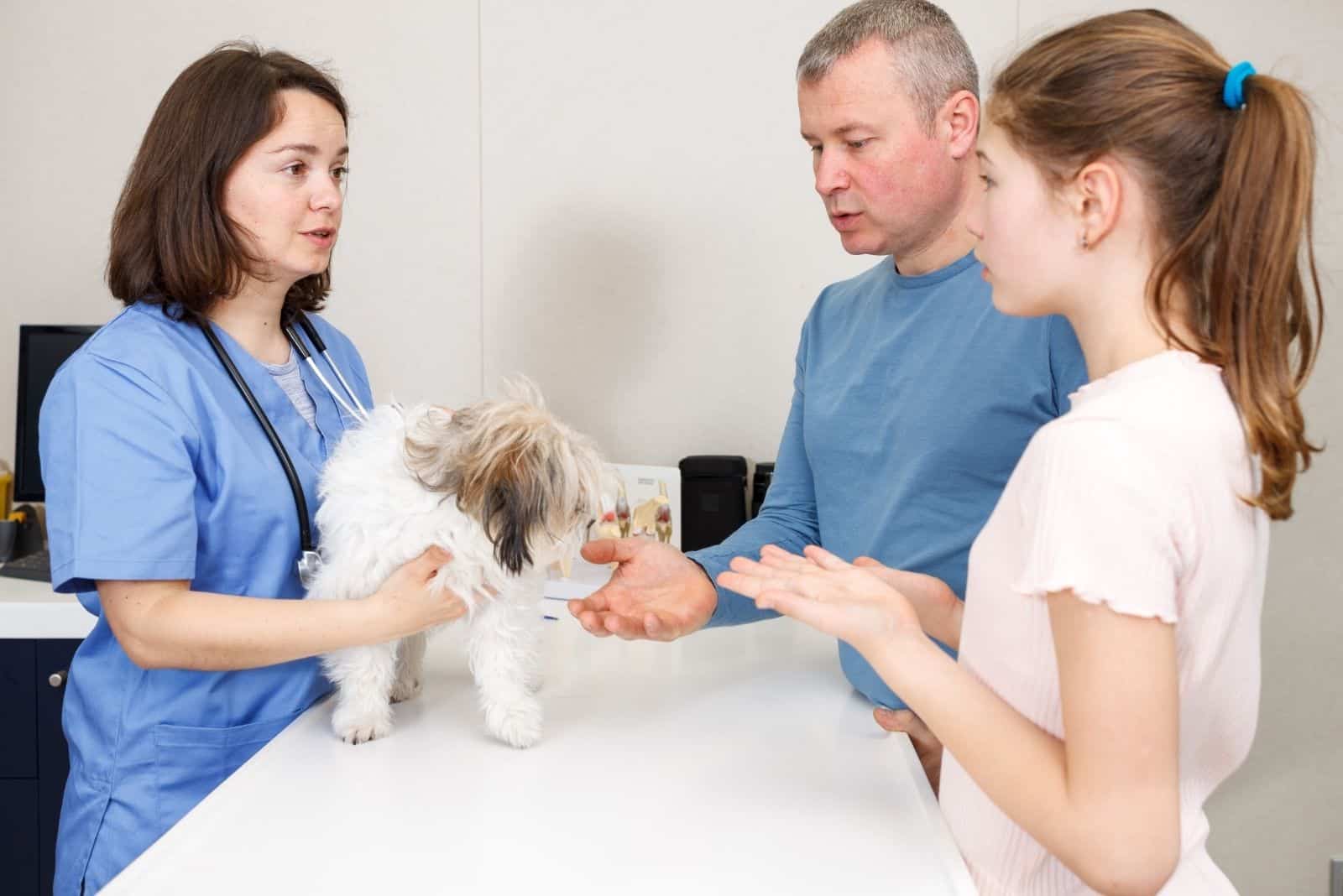 No matter how well we take care of our dogs, sometimes, they can still steal food from our tables when we’re not looking.

Since you know the answer to ‘Can dogs eat sour cream?’ should you be worried if you find that your pooch has eaten lots of it?

The first thing you need to do is put the rest of the cream out of his reach.

A dog won’t know something is bad for him until it makes him feel really sick, and by then, the damage is done.

Your dog won’t get intoxicated after eating sour cream, so you don’t need to panic.

Still, it would be wise to keep a close eye on him for at least 12 hours, just to make sure he doesn’t show any signs of lactose intolerance.

Still, in the worst-case scenario, your pup will experience symptoms like mild diarrhea, vomiting, weakness, or dehydration.

In most cases, these issues will resolve on their own, and they won’t pose a long-lasting threat.

However, if you think you should help your pup, there are a few things you can do.

Make sure your pup fasts for 8 to 12 hours. Let him drink water if he wants to, but don’t allow him to eat anything, as that can worsen the already upset digestive system.

Once this time is over, give him a fairly bland meal such as chicken with rice or boiled meat.

Look for dog food that is good for dogs with a sensitive stomach. Continue with this diet for a day or two.

A good indication that your pup is getting better is when his stool starts to firm up.

Most importantly, don’t give your companion any dog treats until you are entirely sure he is feeling better.

Most treats contain additives or other ingredients that can make his symptoms worse.

Of course, if you notice his symptoms are significant or that they aren’t getting better after a day, it would be best to take your pooch to the vet.

A professional will be able to rule out any serious harm or permanent issues. 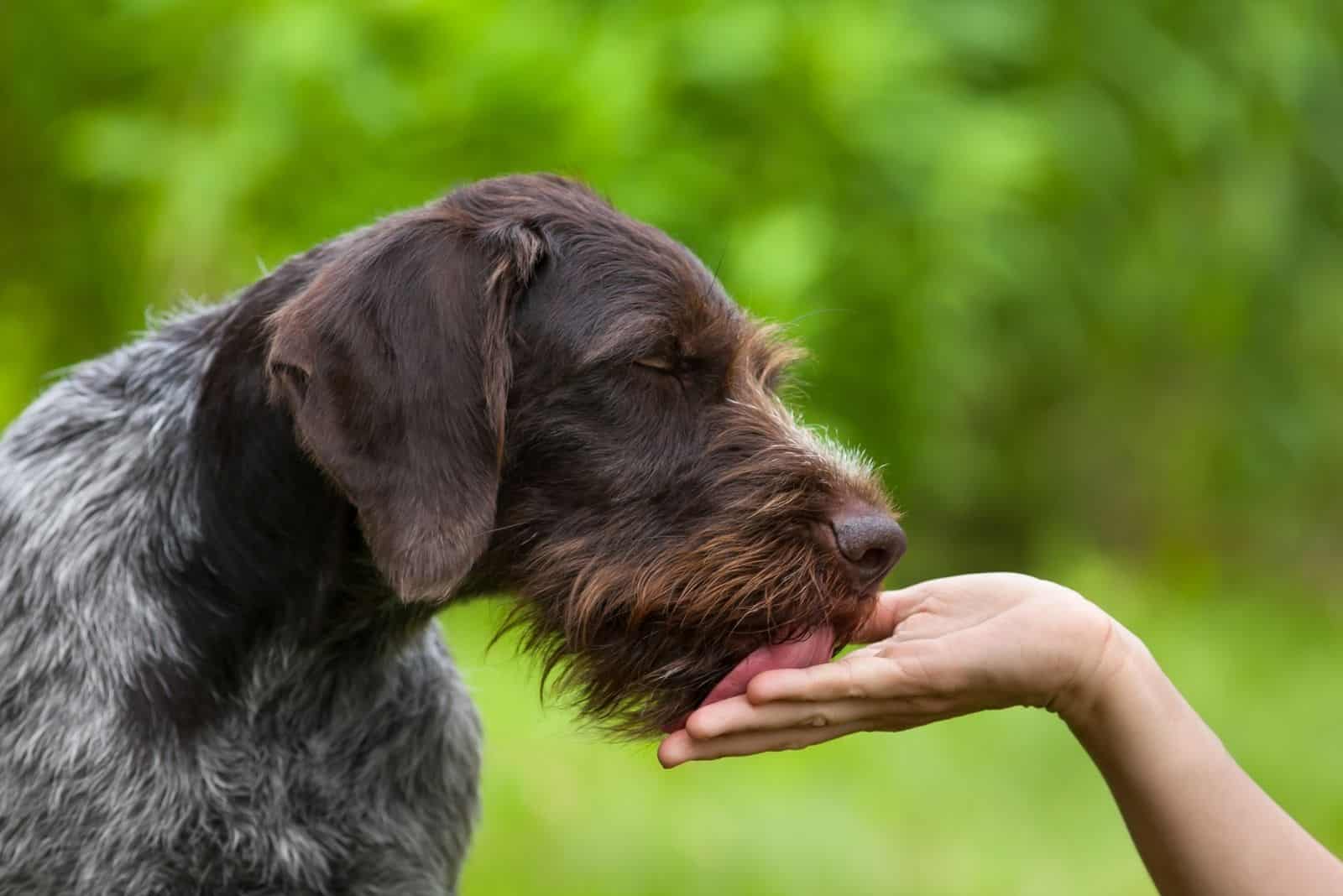 So now that you know that sour cream doesn’t contain anything toxic, you may wonder if you and your pup can share some of your favorite sour cream snacks.

What about sour cream and onion chips or peanut butter?

Peanut butter isn’t harmful to your dog, and while we don’t see why you would need to mix the two, you can give it to him as an occasional treat.

Just remember to only give it to him in moderate amounts. Peanut butter contains high levels of sugar, which can be a calorie bomb when mixed with sour cream.

Sour cream and onion chips are another story.

This snack has high levels of salt and oil. On top of it all, they are entirely covered in grease.

All of this is toxic for dogs, and they shouldn’t have it, no matter the occasion. Not to mention that onion chips are the worst kinds of chips for canines!

Onions are highly poisonous to dogs. Eating even the most negligible amount of onions can cause serious harm to your dog’s health. On certain occasions, this might even result in death.

Overall, it would be best to avoid mixing sour cream with anything if you plan on giving it to your beloved pet. 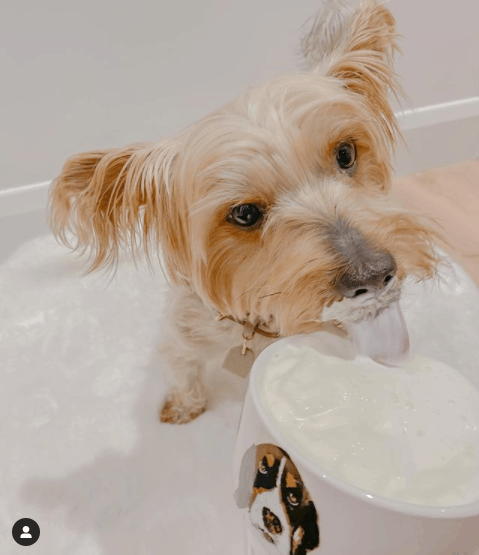 Now you know the answer to “can dogs eat sour cream?” but let’s summarize.

All in all, if you give your dog sour cream in small quantities, he should be fine. This fermented dairy product doesn’t have any health benefits, but it also isn’t toxic.

Still, sour cream can cause your puppy to gain weight, so you need to give it to him in moderation.

A general rule is that treats should always account for less than 10% of your dog’s daily caloric intake. Sour cream is no different.

In fact, we’d recommend you give it in even smaller amounts.

If you have a small breed dog, one tablespoon of sour cream should be enough as a daily treat. For larger dogs, however, up to three spoons are allowed.

Just remember to stop giving your pooch sour cream if you notice any signs of stomach issues or lactose intolerance.

These issues can cause him harm, and this isn’t something you want. Don’t give in to that puppy face – you need to do what’s best for them.

However, if you insist on giving your pooch some type of snack that won’t upset his stomach, you might consider giving him carrots, paprika, fig newtons, or even durian! 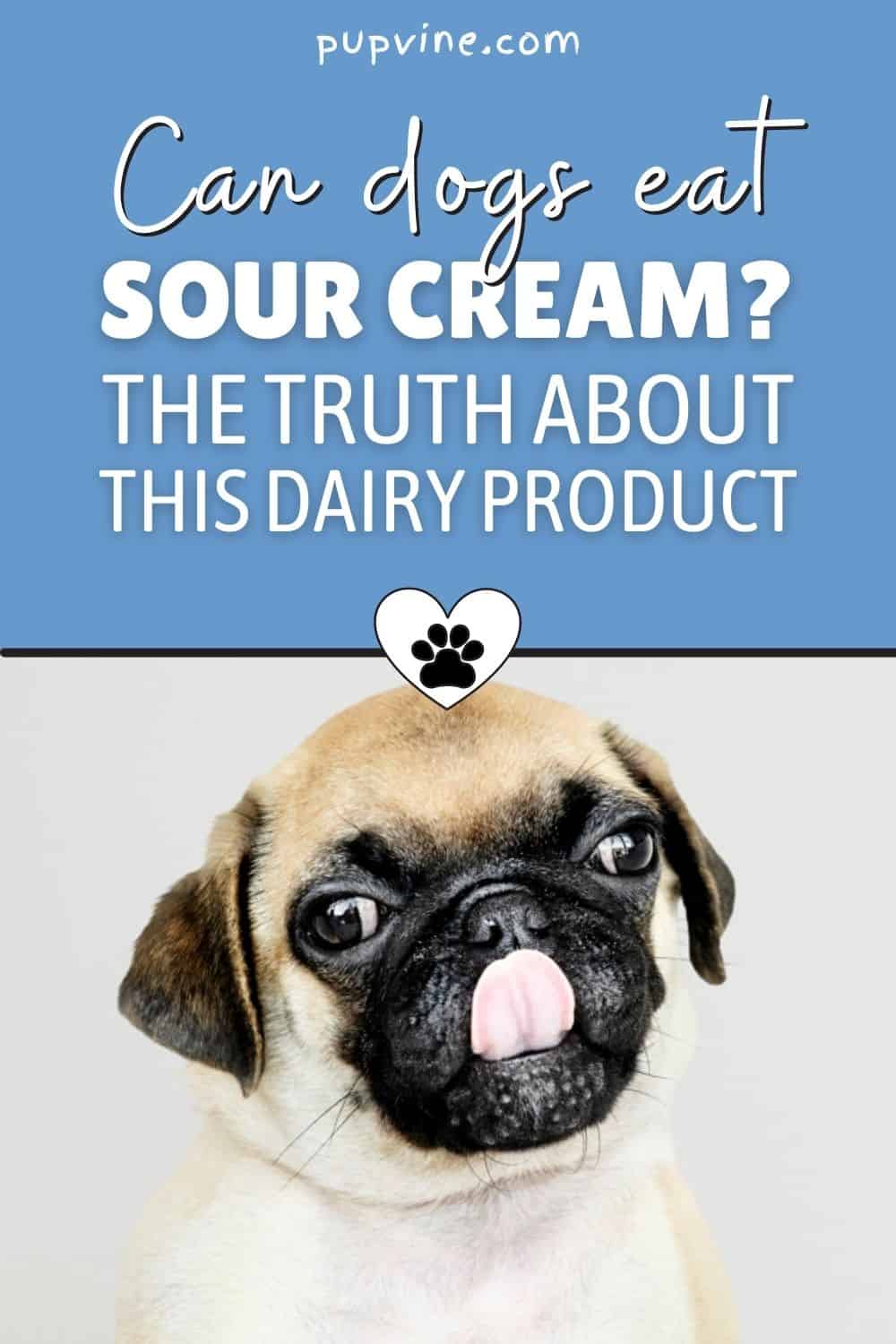 Why Do French Bulldogs Fart So Much? 21 Reasons Why Frenchies Let It Rip

[…] some sour cream and yogurt make good treats for them sometimes and are a good source of natural probiotics, it is […]

[…] means that they cannot drink milk, nor can they eat any dairy product. That said, giving your dog sour cream, blue cheese, or any product containing milk can lead to diarrhea and […]

Corgipoo: Is This The Sweetest Family Dog Ever?

[…] snacks, fruits or veggies like artichokes, tuna, basil, cilantro, papaya, guava, or a spoonful of sour cream to treat them every now and […]