There are more than 70 species of poppy worldwide, the most familiar of which is probably the red ‘Remembrance Day’ poppy.

Aside from the poppy flower (papaver somniferum) being a symbol to remind us of the lives lost during the wars, poppies have a long history of culinary and medicinal use.

They are packed with goodness, with recent research proving that they provide some excellent health benefits to humans.

What we are investigating here, though, is whether it’s safe for dogs to eat poppy seeds. Do these tiny seeds hold the same benefits for our canine friends, or are poppy seeds harmful to them?

Let’s examine the evidence to find out!

Contents show
1 What’s So Great About Poppy Seeds?
2 What Would Happen If My Dog Ate Poppy Seeds?
3 How Would A Veterinarian Treat My Dog?
4 Conclusion

What’s So Great About Poppy Seeds? The ancient Sumerians were among the first to discover the medicinal properties of poppies, encouraging and influencing nearby cultures in the cultivation and processing of various poppy-related produce.

They have remained popular, partly for food use, but probably more for their use in the manufacture of drugs.

The illegal drug trade has indeed given the poppy something of a negative image. It is even banned in some parts of the world because of this. But its value as a medicinal plant can’t be overstated.

Poppies contain alkaloids, such as codeine and morphine, which have been used to produce substances such as laudanum, opium, and heroin.

However, the seeds that we use in cooking have very little alkaloid content, so we would not experience any of the intoxicating effects.

Having said this, studies show that eating small amounts of these seeds can have a calming effect and ease our aches and pains.

They also contain trace amounts of minerals, such as potassium, manganese, copper, iron, and zinc. They are rich in oleic acid as well as being an antioxidant. They are a great source of dietary fiber and can help to lower cholesterol levels.

All of this is great news for humans. But can the same be said for our furry friends?

Clearing Up The Confusion

You’ve scoured the internet in search of answers to the question, can dogs eat poppy seeds?

And you’ve probably found a dozen sites that say, ‘Yes! They’re safe for dogs!’, and a dozen more which shout, ‘No! Poppy seeds are toxic to dogs!’.

So, who is right and who is wrong?

The confusion probably arises from the fact that the poppy plant itself can be a real danger to dogs (and other pets). Cases of poppy poisoning have been recorded over the years, mainly relating to dogs who have ingested seeds, seed heads, or another part of the poppy plant where the opiates are more concentrated.

Anyone who has poppies growing in their garden or who exercises their dog in fields where poppies grow should take care that their pet isn’t snacking on them!

Another fact that adds to the confusion is that dogs are built differently from us. They metabolize their food quicker, meaning that the alkaloids contained within the dried seeds or fresh plants enter their bloodstream in much higher concentrations.

Yet more confusion arises from the fact that different poppy varieties have contrasting levels of opiates. One variety of poppy may be completely harmless, while another could contain levels that are potentially fatal to your dog.

What Would Happen If My Dog Ate Poppy Seeds? This all depends on a whole range of factors, such as your dog’s weight, size, and age. Let’s go with the scenario of a labrador-sized dog who has gobbled up a bagel that you left on the counter for a minute while you answered the phone.

Naturally, you’re worried, as the bagel was covered in poppy seeds. What will happen now?

Well, probably nothing. A few seeds aren’t going to do any long term damage. Just keep an eye on your rascally pooch to see if they show any signs of discomfort. They’re more likely to react to the other ingredients, such as the filling you used (peanut butter, salmon, cream cheese, and so on), than a scattering of seeds!

The most likely outcome would be a slight case of an upset stomach. Just allow them access to the outdoors to relieve themselves, along with a regular supply of fresh, clean water.

The real danger occurs if these seeds are consumed in large amounts. Then you do have cause to worry. Opioid poisoning is no joke. Here’s what to look out for:

• Weakness. Your dog will have no energy and will be reluctant to move from their bed.

• Slow heart rate. Their pulse will be noticeably slower.

• Constricted pupils (pinpoint pupils). Always a bad sign! They may appear distracted, staring at nothing. Their eyes will look very odd.

• Lethargy. Any movement will be slow and sluggish.

• Loss of appetite. The food bowl will be untouched, or they may just nibble at it without finishing.

• Trembling. Their muscles will shake uncontrollably as if the dog is cold or scared.

• Breathing difficulties. This is distressing, both to you and your beloved pet. They may wheeze and struggle to catch their breath.

• Staggering, as if drunk (ataxia). Loss of equilibrium and muscle control are classic signs of poisoning, as the dog fights to walk in a straight line.

On top of these symptoms, your dog may appear sad and depressed or even display hyperactivity. In the later stages of poisoning, they could fall into a coma, with the real possibility of death.

The main issue is that the chemicals within the seeds have a detrimental effect on the dog’s central nervous system, potentially leading to the health problems listed above.

If your dog shows a combination of the above symptoms, seek veterinary advice immediately.

You could also contact the Pet Poison Helpline for expert help and advice.

How Would A Veterinarian Treat My Dog? Firstly, they would check them over to find out the severity of the condition. They could give them an emetic to make them eject the remaining poppy seeds from their stomach.

If this isn’t effective, they may introduce charcoal to their system, which will bind the seeds and stop more of the opiates from entering the bloodstream.

If the dog is experiencing breathing problems, they may need to be intubated or placed in an oxygen cage to manage their oxygen levels.

The veterinarian will monitor their heart rate and vitals, administering additional drugs if necessary. They may also flush out their system using iv fluids.

Let’s be clear, to put your mind at ease: this level of poisoning would only occur if your dog munched on an opium poppy plant or gorged itself on a bag of poppy seeds you carelessly left lying around the home.

Be extra careful when out walking your dog, take note of any plants they may have ingested, and keep any cooking ingredients well out of harm’s way.

The above scenario is one that any dog owner would be desperate to avoid. In general, the internet is an amazing source of help, advice, entertainment, and information. But when conflicting advice is offered, it can be annoying and confusing. What this article has aimed to do is to bring some clarification, to answer all your questions, and put your mind at rest.

We asked, can dogs eat poppy seeds? So, what is the answer?

The ASPCA and the Pet Poison Helpline are clear on this point: there are no safe limits when it comes to feeding poppy seeds to your dog.

Despite their excellent health benefits for humans, there are just too many varieties of poppy to be able to set a safe limit for dogs. This makes it impossible to determine toxicity levels in any given batch.

Even in humans, recent news reports have highlighted the possibility of failing drug tests due to the opioids present. These effects are more pronounced in our pets, with small dogs being particularly vulnerable.

Again, a small amount of poppy seeds should not cause too many problems. Say, for example, you fed them (or they stole!) a poppy seed muffin. Don’t panic. Just watch for any telltale signs. 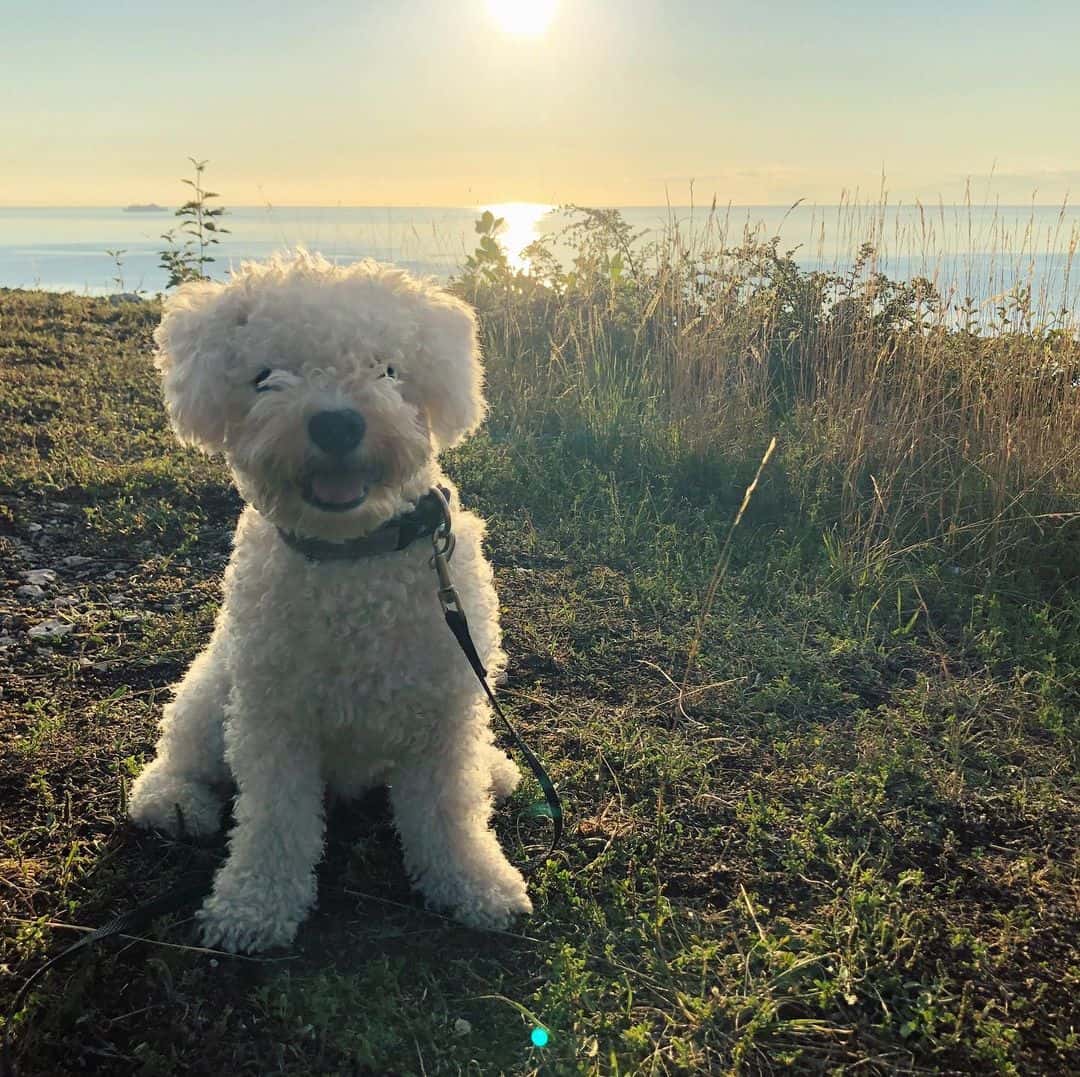 Overall, then, we can say with some authority that eating poppy seeds is not good for your dog. A small amount, perhaps accidentally, should not be harmful, but veterinary advice should always be sought.

It’s important to stress once again that the wider issue here is that those little black seeds are only part of the problem. The wider issue relates to what the seeds are likely to be scattered on or baked in. Dogs are vulnerable to getting sick from a whole host of foods we consume, which needs to be kept in mind.

Stick to your regular feeding regime for your dog to maintain a healthy diet, with the occasional treat. Dogs really aren’t built for most ‘human foods,’ so you are really doing them a great favor by skipping it from their diet, in spite of those big, pleading eyes.

How Much Does Great Dane Cost? Breaking Down The Costs

Best Husky Raw Diet: Going Back To The Roots

Why Is My Dog Throwing Up Yellow & How To Treat It