They’re earthdogs with a crazy-high prey drive. They’re also excellent watchdogs, and one of the finest members of the terrier group. They’re Border Terriers, and today, we’re going to discuss their fashionable side.

Border Terriers are scruffy-looking pooches from the borders of Scotland and Northumberland. Back in the days, along with foxhounds, they were used for many tasks like fox hunting or vermin extermination. Their high energy level and high-quality work ethic made these pups quite popular.

Today, Border Terriers are pawmazing family dogs for active people. They require plenty of exercise to keep them satisfied. But, you can’t tell they’re high-maintenance dogs at all.

Border Terriers are a delight to own in many ways. Along with Dandie Dinmonts and Bedlington Terriers, Border Terriers share the same breed group and the same loveable temperament.

Believe it or not, these terriers are the pride and joy of Great Britain, and one of the oldest pooches of this dog family.

Before we get to know their wonderful temperament, let’s check out their stunning appearance and get to know all the official Border Terrier colors.

The American Kennel Club (AKC) recognizes four standard colors of Border Terriers. The rest of the listed colors are quite rare, and you can consider yourself blessed to own a red wheaten Border Terrier, for example.

How Do You Identify A Border Terrier? 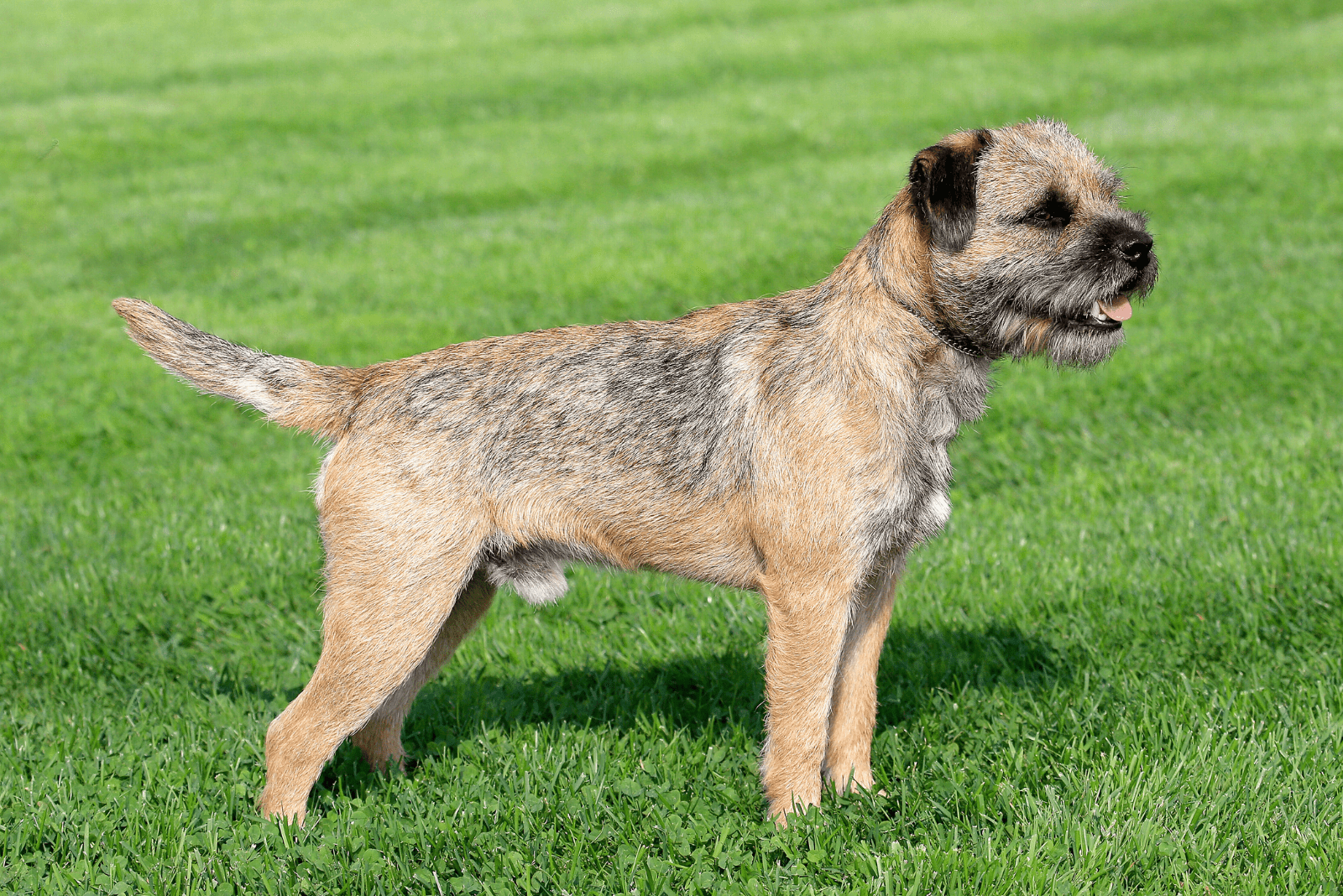 Whether you like them or not, you have to admit that all terrier dogs are something special. They’re all blessed with an immense amount of energy, a bouncy temperament, and agility like no other dog.

That’s also the case with our Border Terrier. This is another small dog breed you can easily find hanging out and enjoying city life. At only 15 inches at the withers, and about 15ish pounds, Border Terriers are definitely so small they can fit into any apartment.

People have begun to appreciate their small size and energetic temperament. That’s definitely the first thing that will help you identify a Border Terrier. After that, you’ll be swept off your feet once you notice their scruffy coat, sparkling little eyes, and overall charming appearance.

Border Terriers have a head shaped like an otter’s head. Their eyes are usually hazel or brown-colored, while their ears are small, floppy, and triangular. They do have a small body, but it’s sturdy, well-shaped, and compact. This gives them lots of speed to complete different tasks.

As you can see, only four colors are standard. Also, it’s allowed for Border Terriers to fashion some white patches on their chest. However, white feet are not accepted by the AKC.

Another signature sign that will help you spot a Border Terrier is definitely their black mask and straight tail.

What Are Standard Border Terrier Colors?

As you can see from our chart above, the American Kennel Club (AKC) accepts only certain Border Terrier coat colors as standard ones. Unaccepted colors dominate, but we’ll get to them soon. 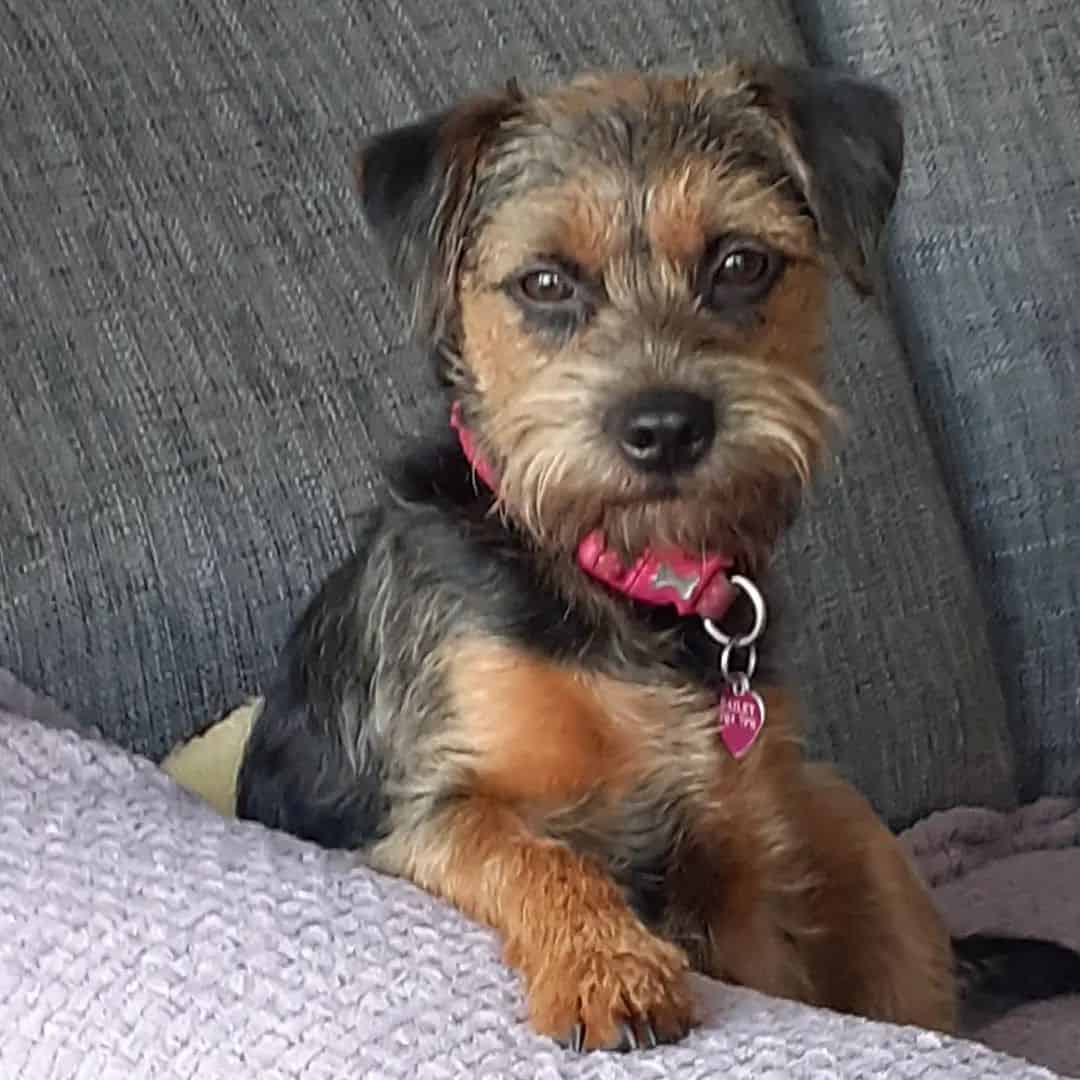 Blue and tan Border Terriers are the second most common of all four standard colors.

These Border Terriers are the textbook example of what you can expect to see when someone mentions this dog breed.

Blue and tan Border Terriers have tan coloring on their legs and under their belly, as well as light patches on their face and on their muzzle. The blue coloring appears to be black, but you can see its real color in the sun. 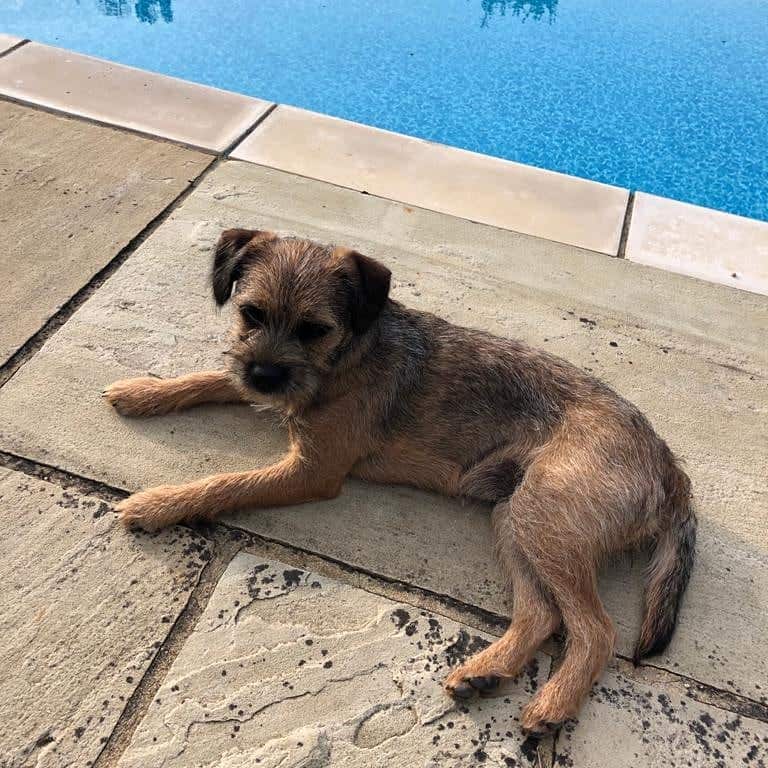 Among Border Terrier puppies, grizzle and tan is definitely the most popular coat color. The thing with grizzle is that it will change into some other shades like gray, brown, white, or red.

Grizzle actually stands for black tipping of the hair, which usually makes an overall color on red or tan coloring.

The grizzle coloring can be either very dark or feature really light shades of grizzle.

As far as the tan portion goes, it’s the same as with blue and tan Border Terriers. 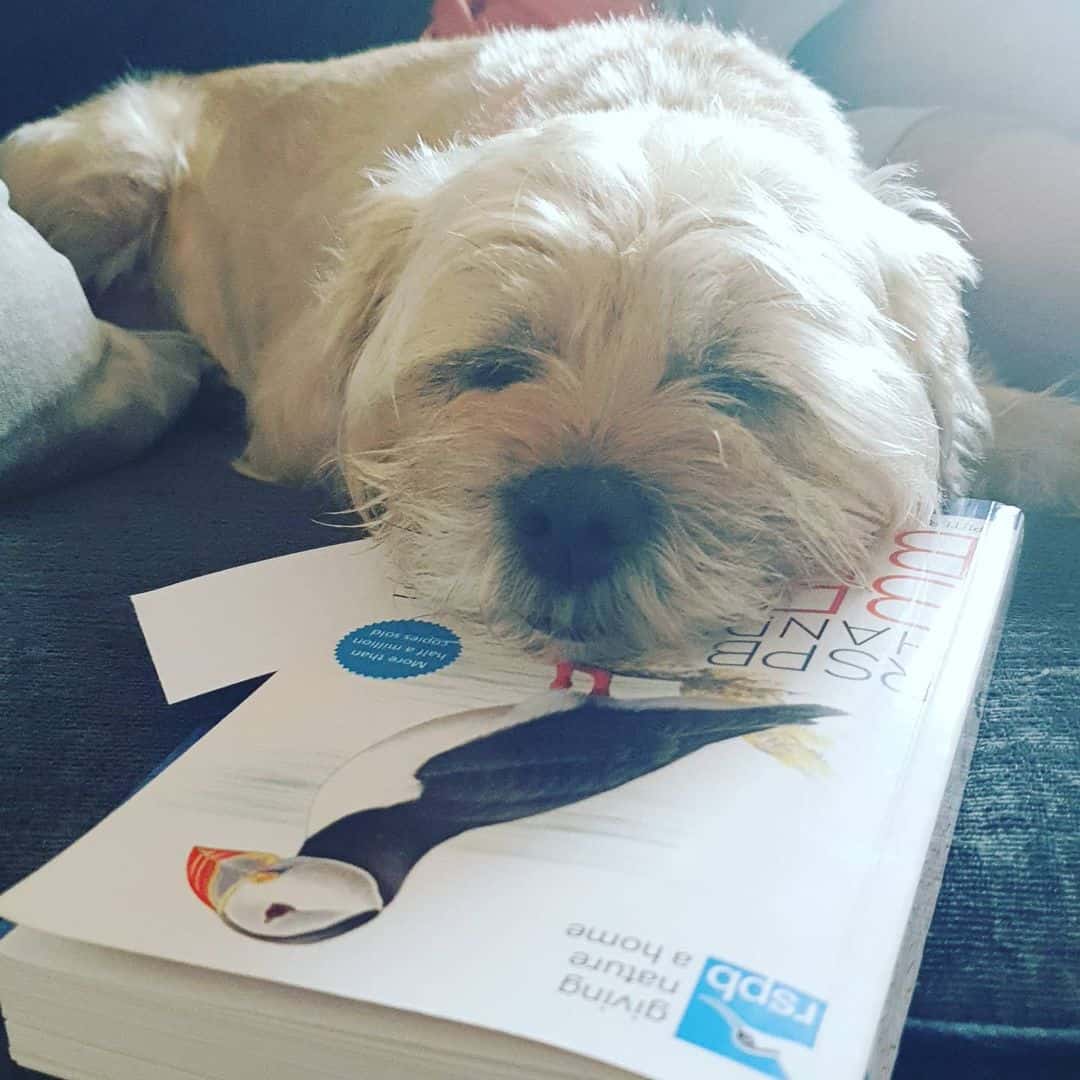 When someone mentions the wheaten Border Terrier and brags about having one, you should know those puppies are as rare as they can be.

But, what color is “wheaten”? How do you spot one?

You’ll recognize the wheaten Border Terrier for its wiry outer coat in light tan. Even the dark markings on their muzzle are a bit lighter than with other Border Terriers. 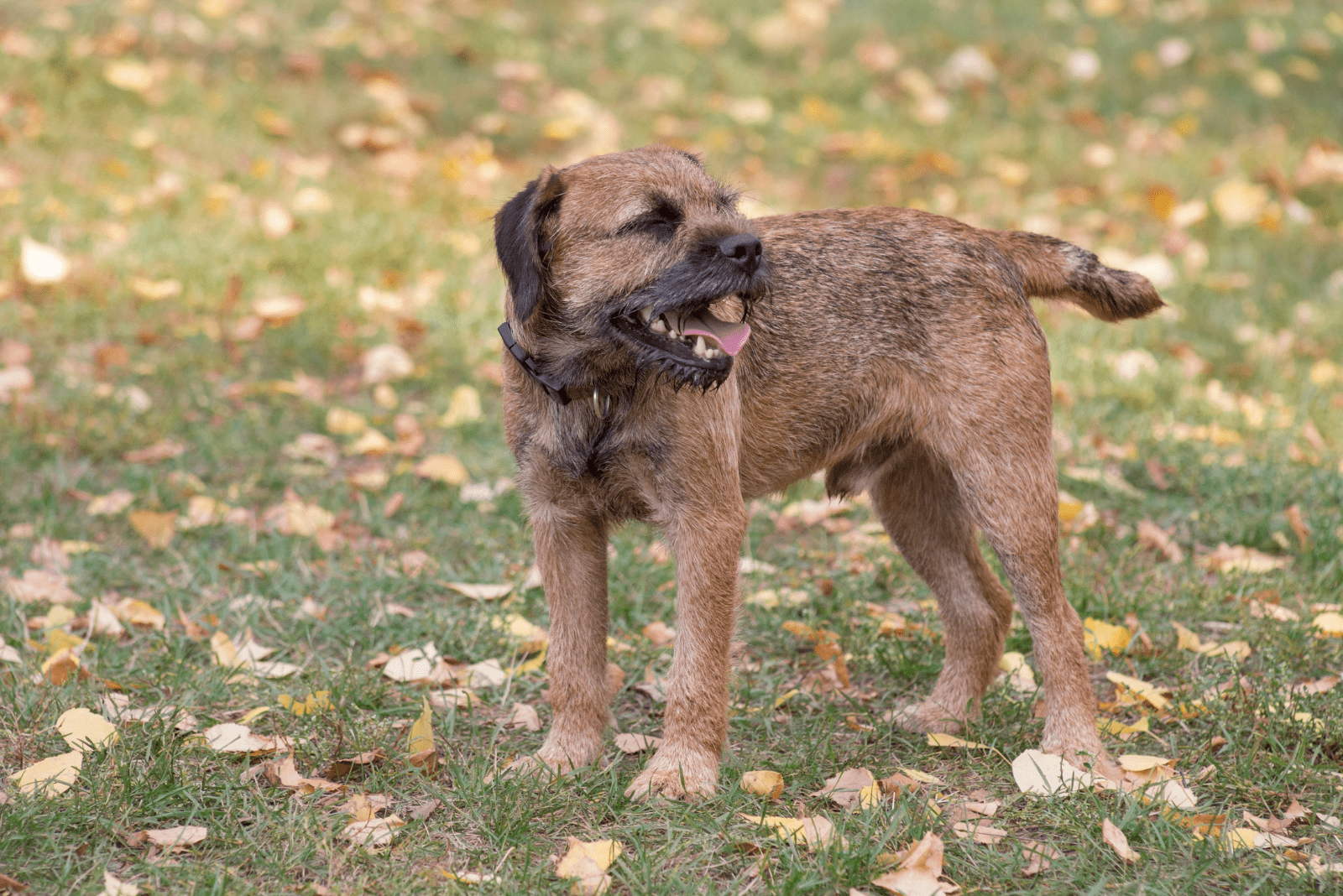 Red Border Terriers are also quite rare, but not THAT rare as the previous coat color.

The red coat varies in shades. So, we can have a deep red, almost brownish coat color with Border Terriers. Also, we can have coppery coat shades with these little dogs.

The typical markings around the muzzle will be noticeable with this color option.

Which Colors Are Not Accepted By The AKC?

Even though they’re bigger in number, it doesn’t mean that they’re easier to find than the four standard colors.

For example, red and wheaten BTs are extremely rare. For starters, hardly anyone has seen wheaten Terriers, and red pigment is rare itself, to begin with.

Other non-standard colors like blue grizzle are more common.

What you need to realize is that what starts as a black and tan Border Terrier puppy will end up as a blue and tan puppy. Black will change into blue eventually, so keep an eye on your pup’s color change.

If you’re interested in enrolling your Border Terrier into dog shows, you must know that non-standard colors are a serious fault. The Border Terrier Club of America only accepts the four official colors as a part of the breed standard.

Do Border Terriers Change Color As They Age? 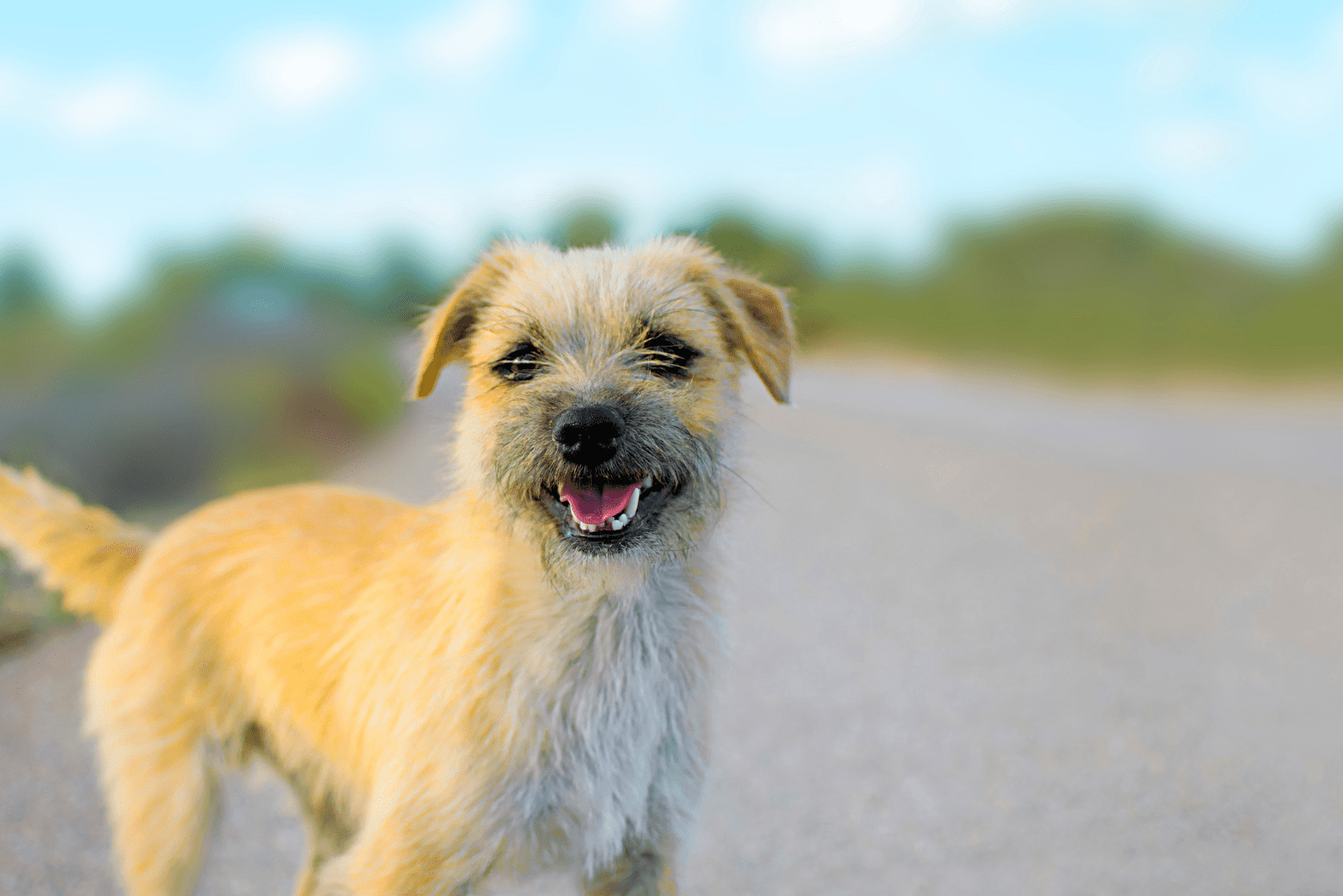 It’s a common practice for dogs of all breeds to change the color of their outer coat as they age.

Some dog breeds have more noticeable changes than others, and that’s absolutely normal.

Border Terrier puppies usually start very dark and feature rich, deep shades of their coat. However, the coat will become lighter. Some specimens of the breed are even very light, bordering with wheaten color once they’re considered adults.

The switch of color can be a slow one. It should be completed by the time the Border Terrier reaches adulthood, which is somewhere after its first birthday, up to their second birthday.

When picking a Border Terrier puppy, you should judge it based on its appearance. The coat color will gain a different shade, that’s for sure. If you’re getting a puppy just because he’s really dark and handsome, you’ll be disappointed.

Also, a part of their growing up is definitely a change in their beard and eyebrows, which means that they will turn gray, and the Border Terrier doggo will turn into a senior pooch.

All reputable Border Terrier breeders will inform you that their coat color will change. Pick a puppy based on his character and overall behavior. If the coat color is the only thing that matters to you, then you should pick another family pet.

Does The Coat Color Affect A Border Terrier’s Behavior?

The Border Terrier dog breed is not one of those breeds known for unwanted behavior or aggression. For example, people often wonder if Cane Corsos are aggressive. Also, they believe that Rottweilers are dangerous. But, what about small dog breeds like our Border Terrier?

Border Terriers are some of the smallest dog breeds. They are working terriers that love to cuddle and show affection to all family members. So, you can’t really expect aggression from them.

The coat color has absolutely nothing to do with the dog’s behavior.

All Border Terriers are smart, highly trainable pooches that will stun you with their abilities and overall easy-going temperament.

Is Coat Color Linked To Health Problems With Border Terriers? 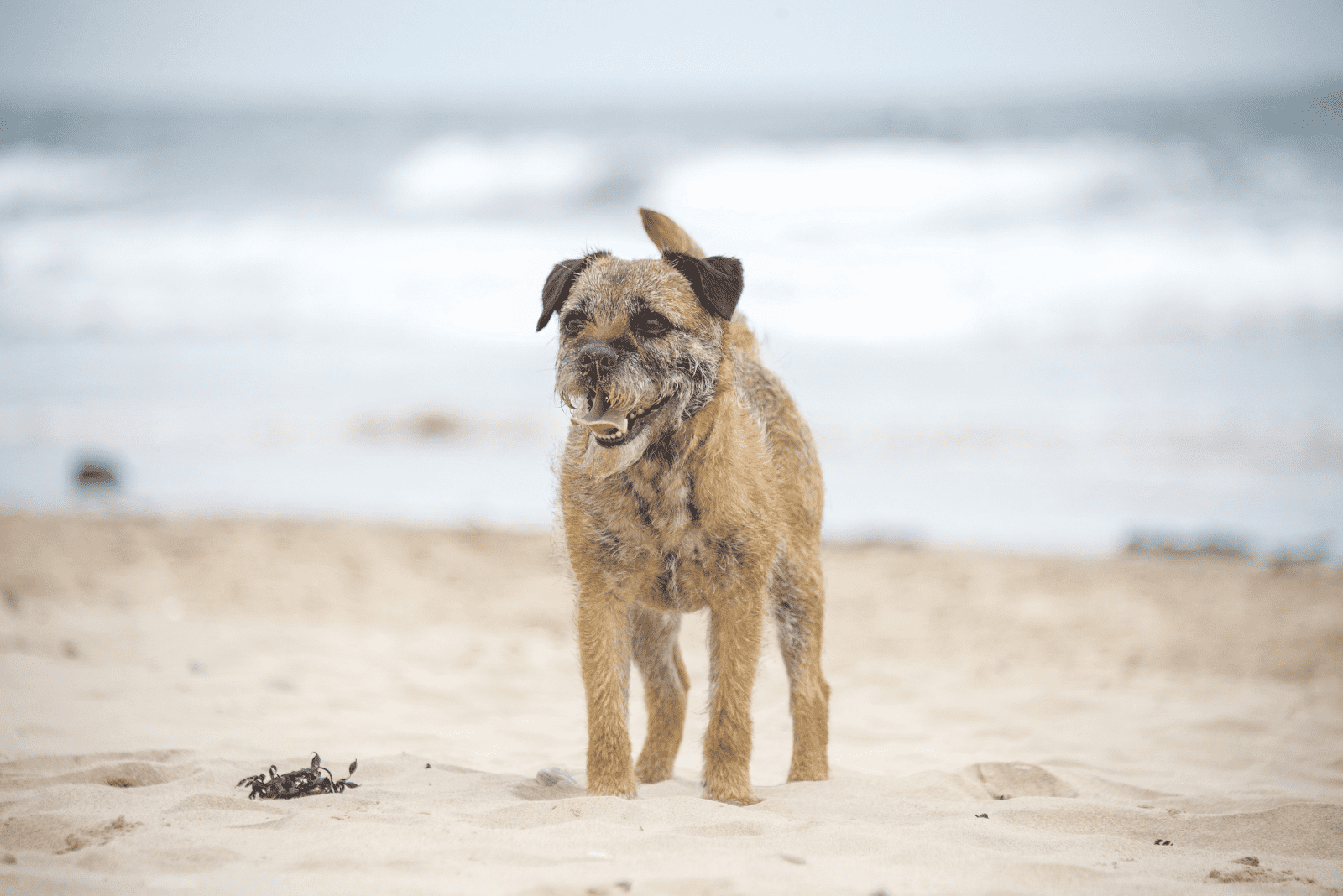 Unfortunately, coat color can be linked to some severe health conditions. That’s not because one color is healthier than another. The whole coat color and health connection is based on the genetic pool the puppy has.

Simply put – if the puppy is a result of multi-gen breeding or even crossbreeding, he will definitely have severe health problems.

Take the Doberman breed, for example. There are white Dobies and albino Dobies. One is healthy while the other one is a product of genetic mutations and completely unhealthy. Also, merle (as in merle Chihuahuas) is not considered a good example.

As far as purebred dogs of the Border Terrier family are concerned, there are no major health issues linked to their coat colors.

Border Terriers are considered fairly healthy. The biggest health problems these dogs can face are elbow and hip dysplasia, as well as neurological conditions like canine epilepsy.

However, I must warn you to be cautious with unrecognized coat colors, such as blue grizzle or red grizzle and tan. The unusual coloring can only mean one thing: messed up games with the genetic pool in order to get a specific color.

What Kind Of Coat Does A Border Terrier Have, & How Do You Groom It?

At first glance, an average Border Terrier appears to be scruffy and a bit neglected. But, that’s far from the truth. Border Terriers only have a wiry coat, which makes them look like they have never been groomed in their entire life!

So, here’s how things really are.

Border Terriers are dogs blessed with a double coat. The fact that they have two coats (one of them being wiry) makes these dogs one of those pups with a weather-resistant coat. Despite being small animals, Border Terriers won’t need a store-bought coat in the winter.

They’ve got their own, thank you very much!

The undercoat is soft, dense, and fluffy. Surprisingly, Border Terriers are hypoallergenic, which makes them ideal family dogs for allergic people.

When it comes to grooming them, you should know that Border Terriers don’t need a lot of bathing. It’s natural for their coat to repel dirt. This is another bonus point for Border Terriers.

These dogs are low-maintenance in terms of grooming. You should brush them at least two to three times a week, for around 10 minutes or so.

A Border Terrier’s coat should be stripped a few times a year. This means removing dead hair from the undercoat by using your hand or a stripping comb.

I suggest you don’t cut your Border Terrier’s hair or trim it as it may become thinner and lose its weather-resistant features.

England’s favorite terriers are surely lovely creatures, and Border Terrier colors are truly something beautiful. They’re unusual, unique, and overall quite intriguing. These dogs are not your average terriers. Border Terriers are something special. You’ll realize that once you get one for yourself.

But, I do have to warn you that no matter how beautiful all the Border Terrier colors are, you should judge a dog by its character. Sure, with proper socialization, all dogs can be great pets. But, generally speaking, Border Terriers are already great.

Give them love, care, yummy dog food, and regular vet visits, and your Border Terrier will pay you back with a long lifespan packed with unmeasurable love!