The Bloodhound colors and patterns can easily trick you into mixing them up with other breeds that are similar shades, which is kind of funny since these pups are known as the ones that are supposed to catch the tricksters!

This type of breed might not look like a canine that enjoys training and daily exercise, but their average energy level is actually what makes them one of the best choices for search and rescue canines, along with their remarkable tracking skills.

However, they can also be great family canines because they’re just as good with kids as Australian Shepherds, Corgis, Rottweilers, American Staffordshire Terriers, and Golden Retrievers.

Find out more about the variety of Bloodhound colors and coat types along with other important information about this breed by reading the rest of the article. 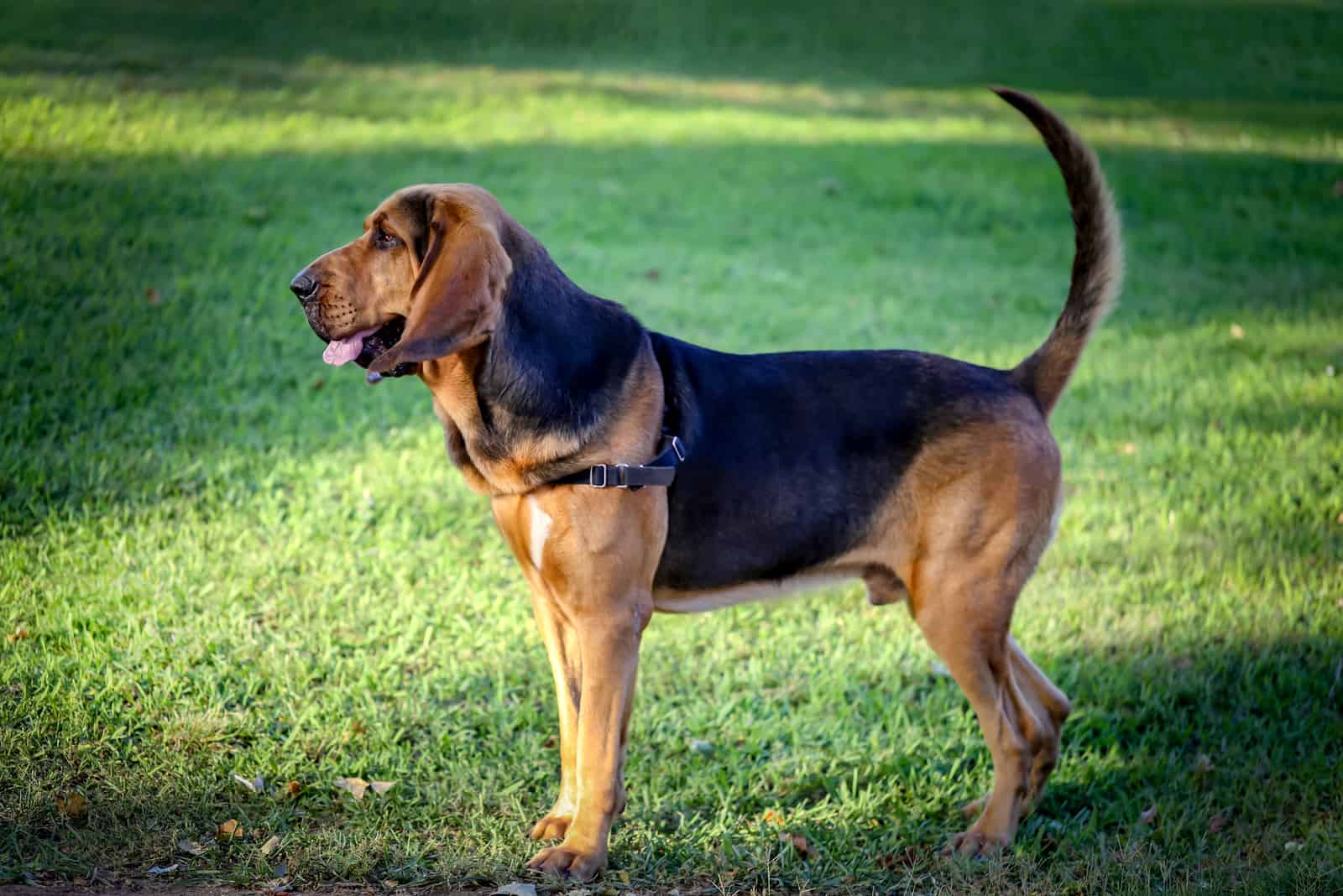 There are three official Bloodhound colors that are recognized by significant associations and organizations, such as the American Kennel Club (AKC), American Bloodhound Club, The Kennel Club, and others.

Black and tan, liver and tan, and red colors are the only shades that comply with the Bloodhound AKC breed standard and are the only colors accepted in conformation events and dog shows.

To say that a particular canine breed has a black and tan coat is the broadest explanation of their color.

For example, German Shepherds, Rottweilers, Dobermans, Bloodhounds, and other breeds all include black and tan in their coat colors, but the pattern is not the same.

This variety of coat patterns can also be applied to the same breed.

Black and tan Bloodhounds come in four different marking types, ranked from B1 to B4.

The undercoat shade is tanned, and the overcoat is covered in black (the amount depends on the coat type).

Types Of Black And Tan Coats 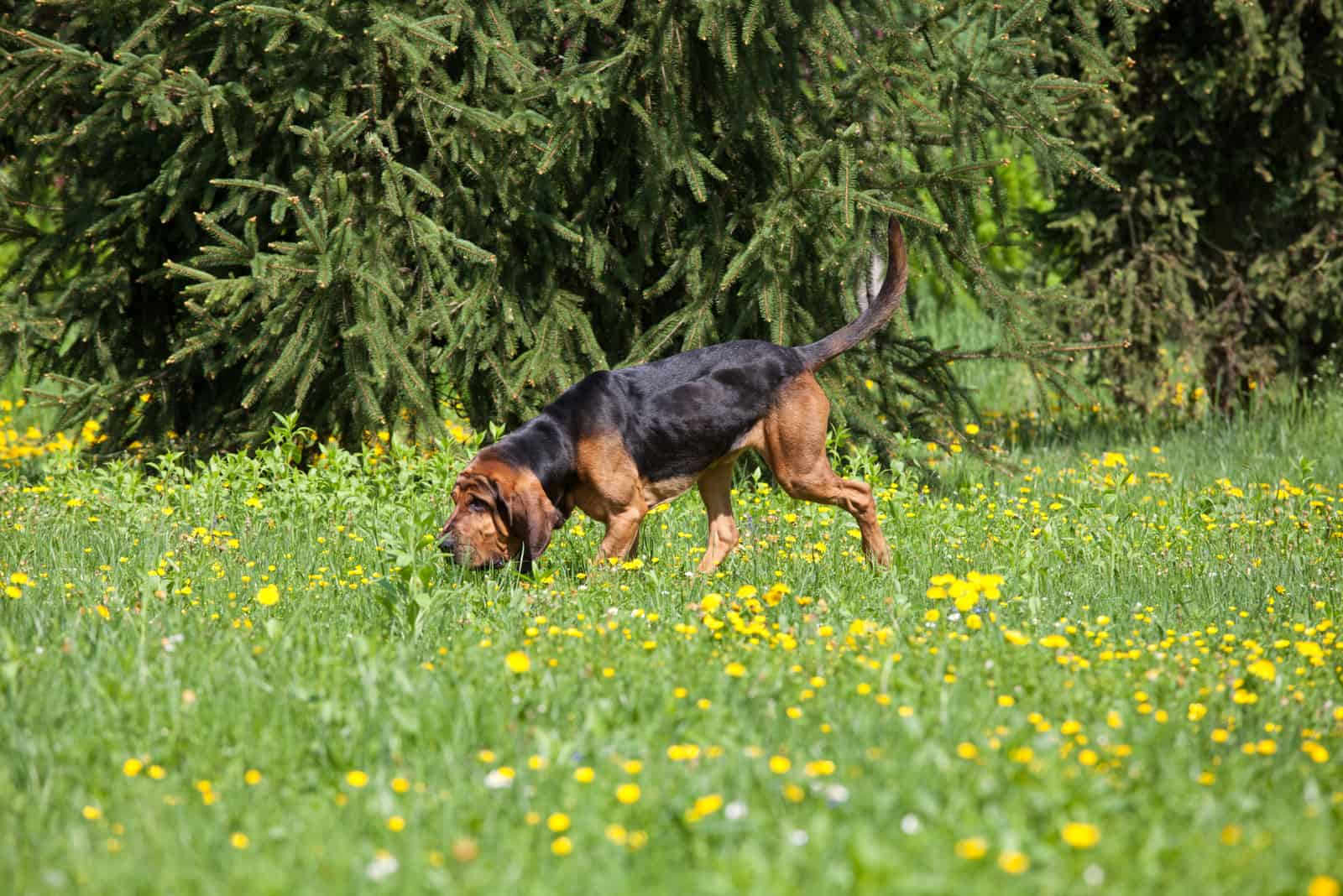 On the other hand, B2 black and tan types of coat hair have a stronger black hue on the top that is reminiscent of a saddle.

That is precisely why this coat category is also known as the black and tan saddle type. This type of black and tan color is quite similar to the German Shepherd coat shade combination.

The difference between B3 and B4 is minimal, which is why these two coat shades belong to the same group of black and tan blanket-type coats.

The reason why they’re called this is the fact that the black color covers their back almost entirely, including the hindquarters.

Truth be told, B4 canines are a rare sight since this type of color comes from a recessive gene.

Can Bloodhounds Be Black?

Solid black is almost non-existent colour in modern Bloodhounds, but it can occasionally occur in some pups and depends on the genes they inherited from their parent breeds.

However, black can be predominant in some black and tan Bloodhounds, showing the tan shade only in spots on the legs, around the muzzle and eyes, or on the chest.

This type of Bloodhound coat often reminds dog owners of Rottweilers, Dobermans, Dachshunds, and other canine breeds with a similar color pattern. 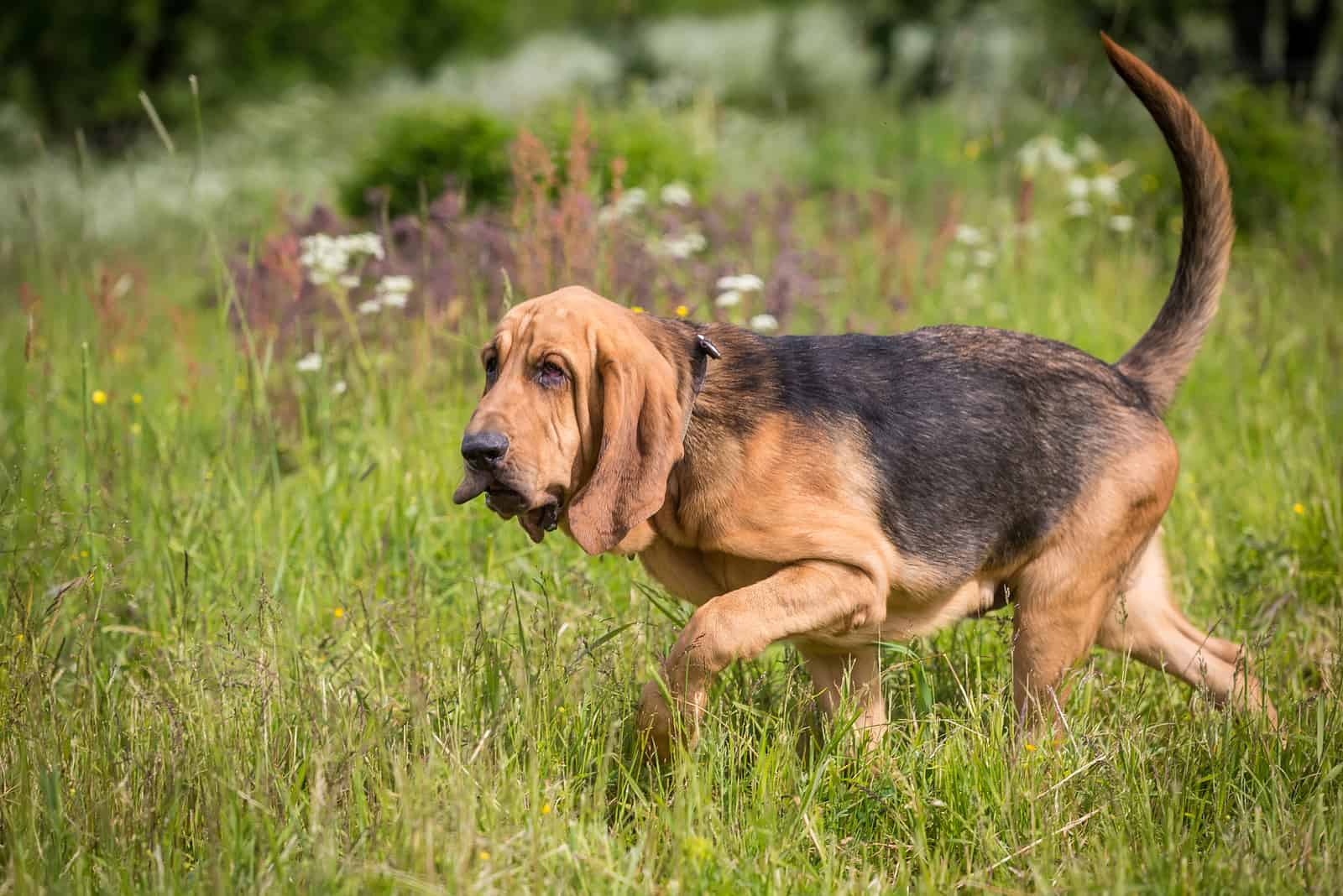 This type of coat color can be divided up in the same way as the black and tan shade.

Liver and tan is a broad category of several shades and patterns that appear in the Bloodhound breed and can be ranked as L1 to L4, depending on the richness of the shade that covers the base tan color.

Types Of Liver And Tan Coats

The L1 shade follows almost the same pattern as the B1 hue. The liver shade appears as a mild color on the back of the Bloodhound, which is why it’s sometimes confused with brown.

The L2 color type is also known as the saddle coat color because the liver pattern resembles the shape of the horse saddle on the Bloodhound’s back.

The L3 and L4 are similar, which is why they belong to the blanket type of liver and tan coat color, but the latter type often seems to be richer in color.

Because of that, the L4 is often considered to be a full liver coat color, as it appears to have a tan shade only in certain parts of the body, including the legs and the muzzle. 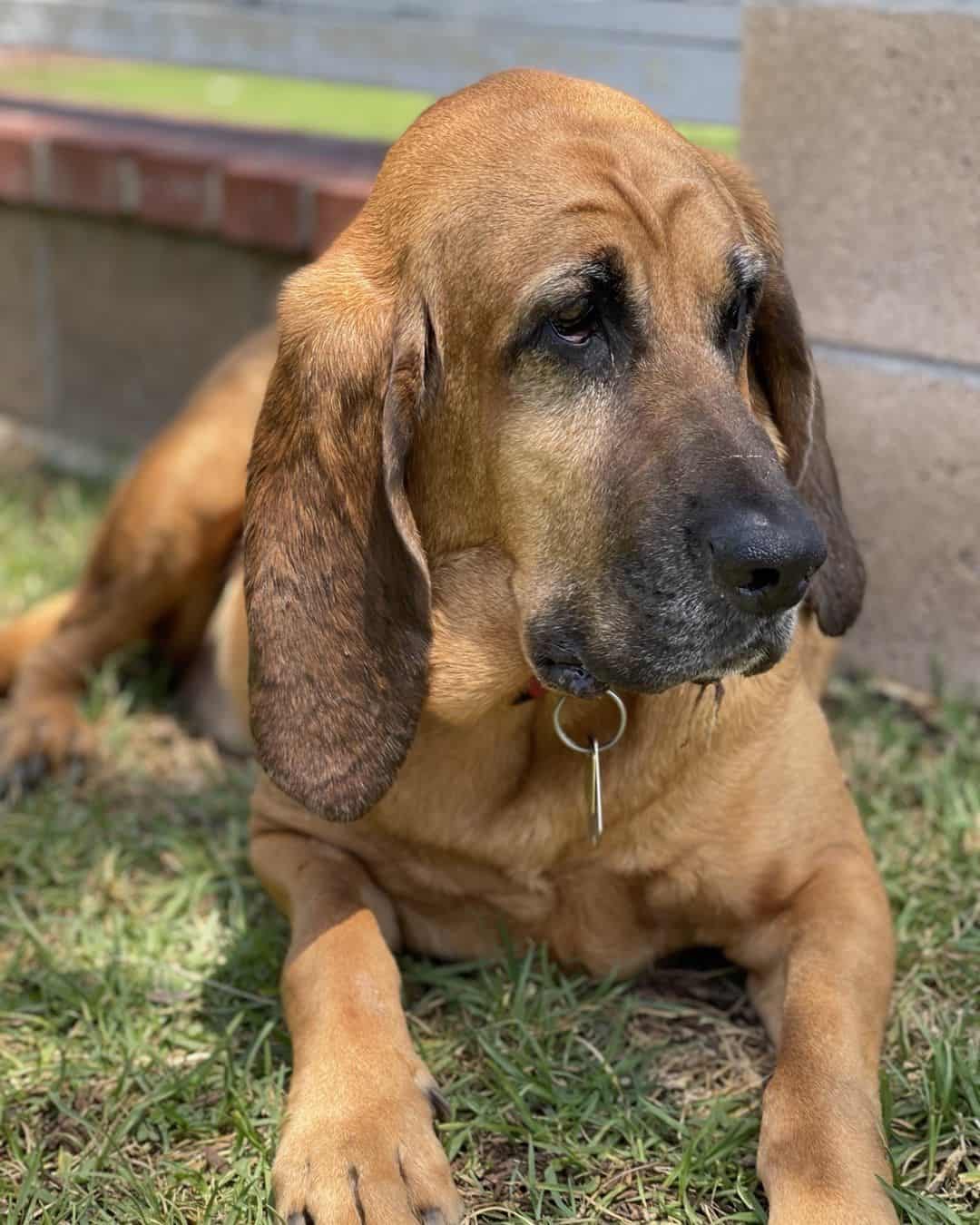 Last but not least is the red Bloodhound, one of the AKC recognized Bloodhound colors that might not be anything other than a tan-colored Bloodhound pup without black or liver hues on its back.

The variations in the red shade are minor and can be anywhere from light red (a tan-like color) to a darker red hue (a brown-like color).

However, even though they’re covered in solid tan color, without any other color covering their backs, a specific characteristic divides red Bloodhounds into three different categories.

Essentially, there are three types of red coats (and muzzles) when it comes to Bloodhounds.

The first type would be the black and red muzzle type. Just like the name suggests, the coat is covered with the red shade on all body parts except the muzzle, which is black.

The same goes for the liver and red muzzle; the liver shade is mainly focused on the area around the nose.

The solid red muzzle isn’t hard to guess either because the coat is covered in red shade only, without any spots or markings of other colors.

What Is The Rarest Bloodhound Color? 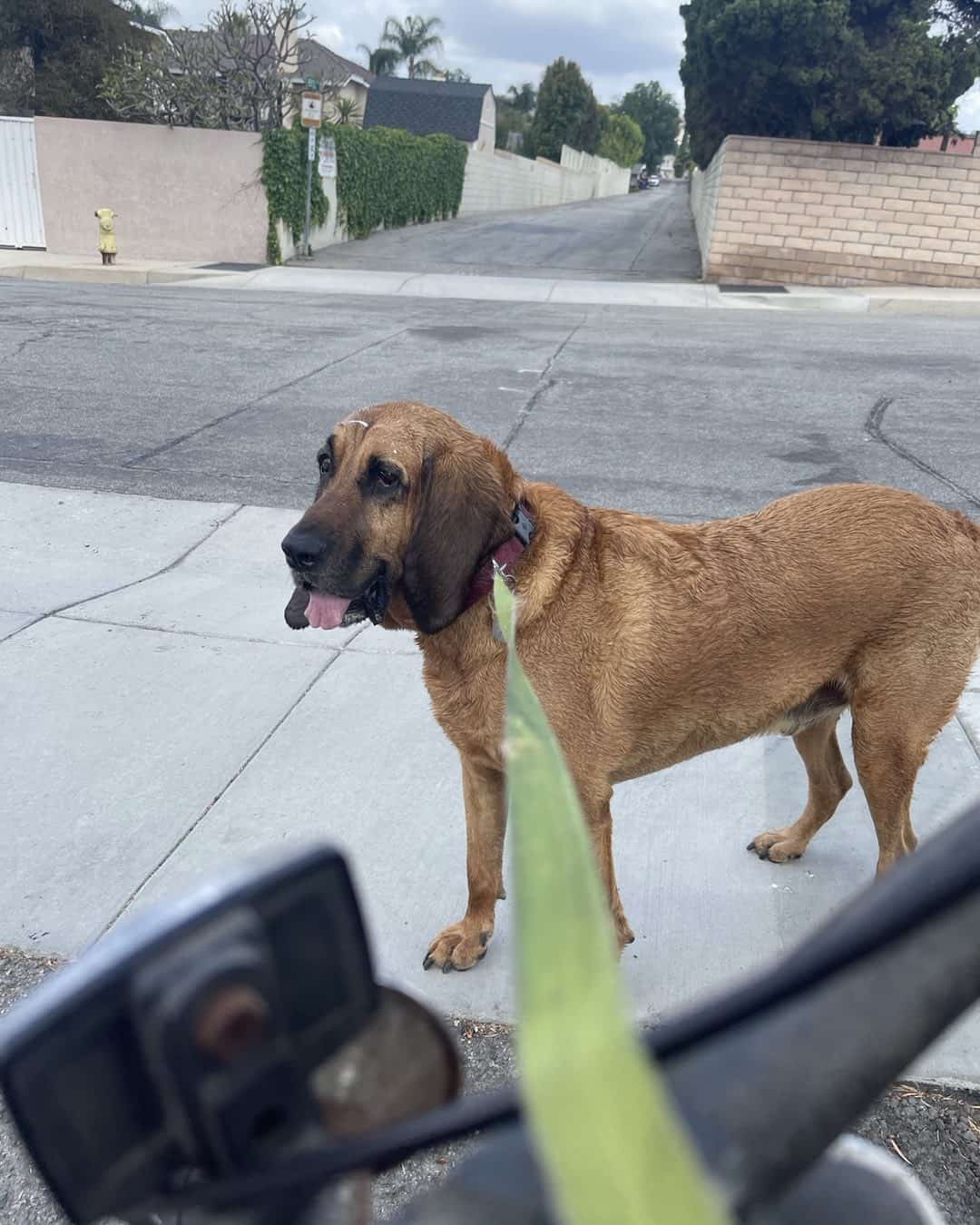 Without a doubt, one of the rarest Bloodhound colors is the solid red shade, as these pups rarely appear without at least one or two spots of liver or black hue on the red or tan coat.

On the other hand, the most common shade of Bloodhound coats is definitely black and tan, which is why it’s considered a trademark color for the Bloodhounds.

Can Bloodhounds Be White?

A white color is generally not accepted by the AKC or any other major canine organizations because it’s related to specific medical issues.

If you come across a white Bloodhound, you can be sure that it will have at least several spots of other colors on its coat. Unfortunately, most canines that come in such shades are bred by unethical breeders and puppy mills.

However, a small amount of white color can appear in purebred adult dogs, but only in certain body areas, such as the chest and legs.

What Is The Origin Of The Bloodhound Breed?

This dog breed has been around for centuries, which might sound surprising at first since they only appeared in the U.S. in the second part of the 19th century.

However, their origin goes all the way back to seventh-century France, and Saint Hubert, an avid hunter, was known as the first breeder of these pups in Europe. He unlocked the full potential of these scent hounds and was later named the patron saint of hunters. The pups were later bred in Belgium, in the St. Hubert Monastery, to be exact.

The “original” Bloodhound was brought to Europe in two types of colors, black and white, which are almost non-existent as solid colors of this canine breed nowadays.

This type of pup was known as St. Hubert hounds until they later became the Bloodhounds we know of today.

The modern Bloodhound appeared in England hundreds of years after St. Hubert first discovered them. William the Conqueror brought them to England during the 1060s, and it didn’t take long until these pups became popular among the English nobility.

How To Groom A Bloodhound? 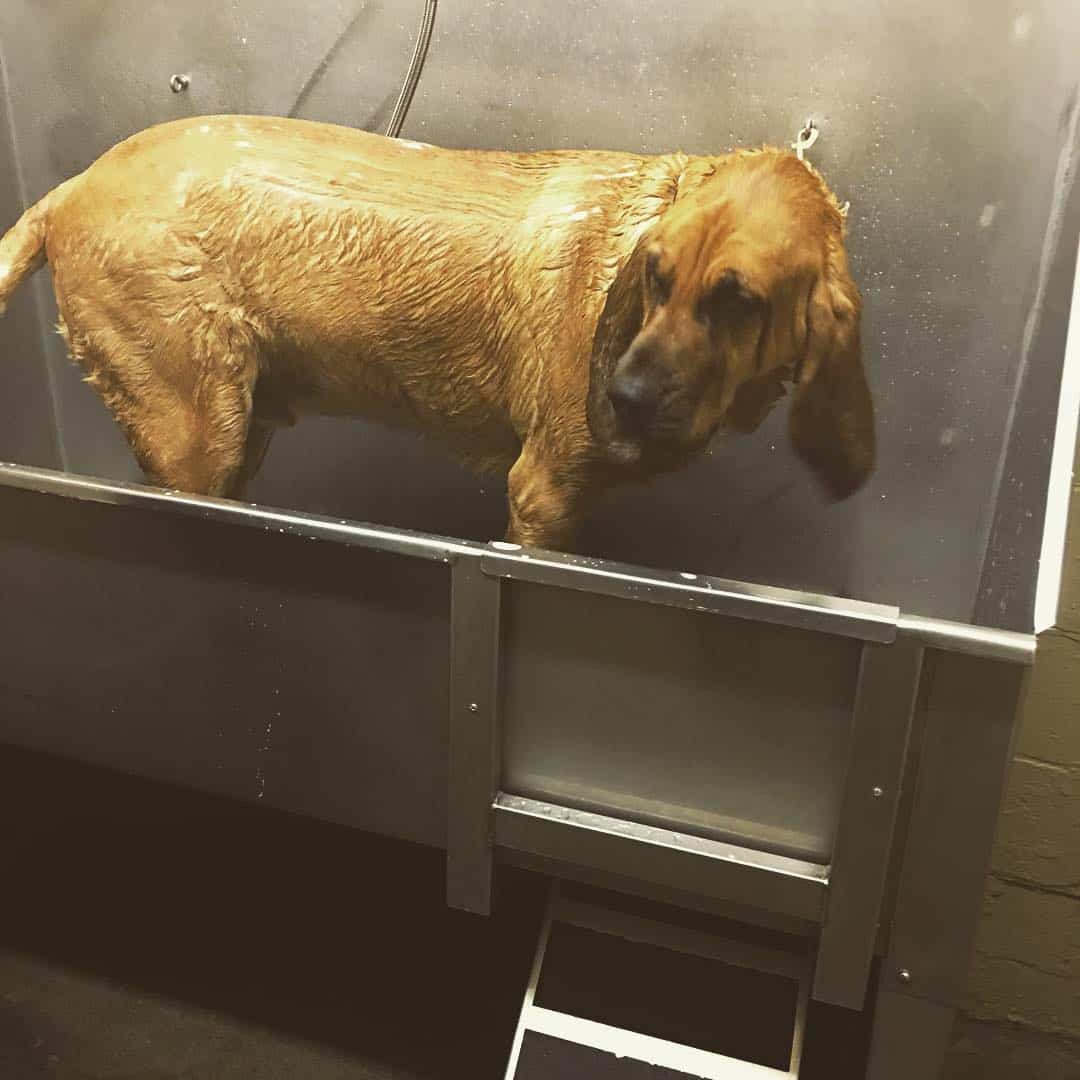 Bloodhound puppies are generally easy to groom, and most owners claim they can groom their pets at home without any difficulties because they have short coat hair.

However, the body shape of the Bloodhound dogs (large body, loose skin, deep folds, and long ears) might cause certain problems during baths and hair trims.

These canines also have a big muzzle, which is why they often drool; therefore, even if they don’t leave as much coat hair behind them as German Shepherds, they will leave traces of saliva over your furniture.

In case you’re wondering how to groom a large breed such as Bloodhound, here are some general tips and tricks that always give the best results.

This is a fairly simple process that doesn’t require any special preparations, except nail clipping which should be done before your pup takes a bath.

Bloodhounds should be washed with shampoo and a conditioner, even though they have short hair.

However, keep in mind that they are scent hounds, so have a high sensitivity toward all kinds of smells.

Therefore, it would be better to always go for fragrance-free or shampoos with milder scents.

These pups have really long ears, just like their mixed-breed dog called the Coonhound, so it’s essential to pay close attention to them during the grooming process.

The longer the ears, the higher the risk of health problems like ear infections. Therefore, you should take good care and dry their ears the best you can to prevent any yeast or bacterial infections.

Ears should be cleaned at least every four to six weeks.

READ NEXT: Coonhound Beagle Mix – Is This The Best Beagle Mix?

This part of the body shouldn’t be neglected, either. This canine breed usually has saggy eyes, which require special care and more time to clean.

Bloodhounds are prone to entropion and ectropion, health issues that might be the cause of your pup rolling its eyes back or rubbing them all the time.

Lack of hygiene could worsen the symptoms of these conditions and lead to more serious eye infections, such as conjunctivitis.

The last but most crucial part of grooming is brushing your Bloodhound.

Even though Bloodhounds don’t have long coat hair, they still require regular brushing, at least three or four times a week.

This way, their coat hair will never get matted, and it’ll always have that nice and fresh look.

Brushing is also a great mutual activity for the canine and its owner. Some would even go as far as to say it’s a type of socialization between the canine and a human.

Dogs enjoy this part because they’re finally getting rid of the stress that is caused by their inability to scratch almost every part of the body.

Bloodhound colors might be an important part of their physical appearance, but the crucial part for the majority of dog owners is their personality.

These pups are excellent as both family pets and search and rescue canines.

Bloodhounds are known as great trackers, which is why they won’t have any trouble catching a poacher or a thief.

That is the main reason why Bloodhounds are considered one of the best furry friends of law enforcement.

You should be careful about giving them proper dog food to prevent bloating and other stomach issues, such as gastric dilatation-volvulus.

However, they can be just as adorable as other breeds, to the point that they think of themselves as small dogs, so don’t be surprised if your giant pet sits on you as soon as you get on the sofa!

Life’s too short to think about colors only, especially since these large dogs have a life span of only ten to twelve years; therefore, relax and try to enjoy each day of your lives!

Coonhound Lab Mix: A Family Dog With A Working Habit

[…] canines typically take on their Bloodhound parent’s wrinkly skin. Bloodhounds have three distinct coat colors that are recognizable, just as […]