So, I heard you just got a lovely little Biewer Terrier and you’re looking for some cool Biewer Terrier haircuts! Congrats! I hope you know you got a pretty pawesome dog breed.

We have lots of sweet small-breed dogs, but Biewer Terriers are among the cutest ones. Although it’s a fairly new dog breed from Germany, the Biewer Terrier has managed to find its spot under the sun.

As a member of the small dog breed club, the Biewer Terrier is as lovely as it gets. It’s only natural to want to make them even prettier. That’s where hairstyles come to help.

Doggy haircuts aren’t only a fashion statement, they make the whole grooming routine much easier. It’s always simpler to take care of a short-haired pup than a long-haired one.

And, lastly… what Biewer Terrier haircut options do I have as a new BT owner?

Stay tuned, and I’ll make a beginner Biewer Terrier groomer out of you!

What Are The Most Popular Biewer Terrier Haircuts?

No, those are not Yorkshire Terriers or Yorkies. I know… they look awfully alike, but they’re actually separate dog breeds – one derived from the other. With that being said, Biewer Terriers are direct descendants of the Yorkie.

But, Biewer Terriers are a dog breed recognized by the American Kennel Club (AKC) just as any other purebred dog.

However, if you don’t want to enroll your Biewer Terrier into competitions, then you can fashion some other fancy Biewer Terrier haircuts. They’re usually a result of practical needs since a floor-length coat is difficult to groom.

A lot of dog owners have decided on the puppy cut as it’s easy to groom. Still, we have some other pretty pawesome hairstyles you should check out! 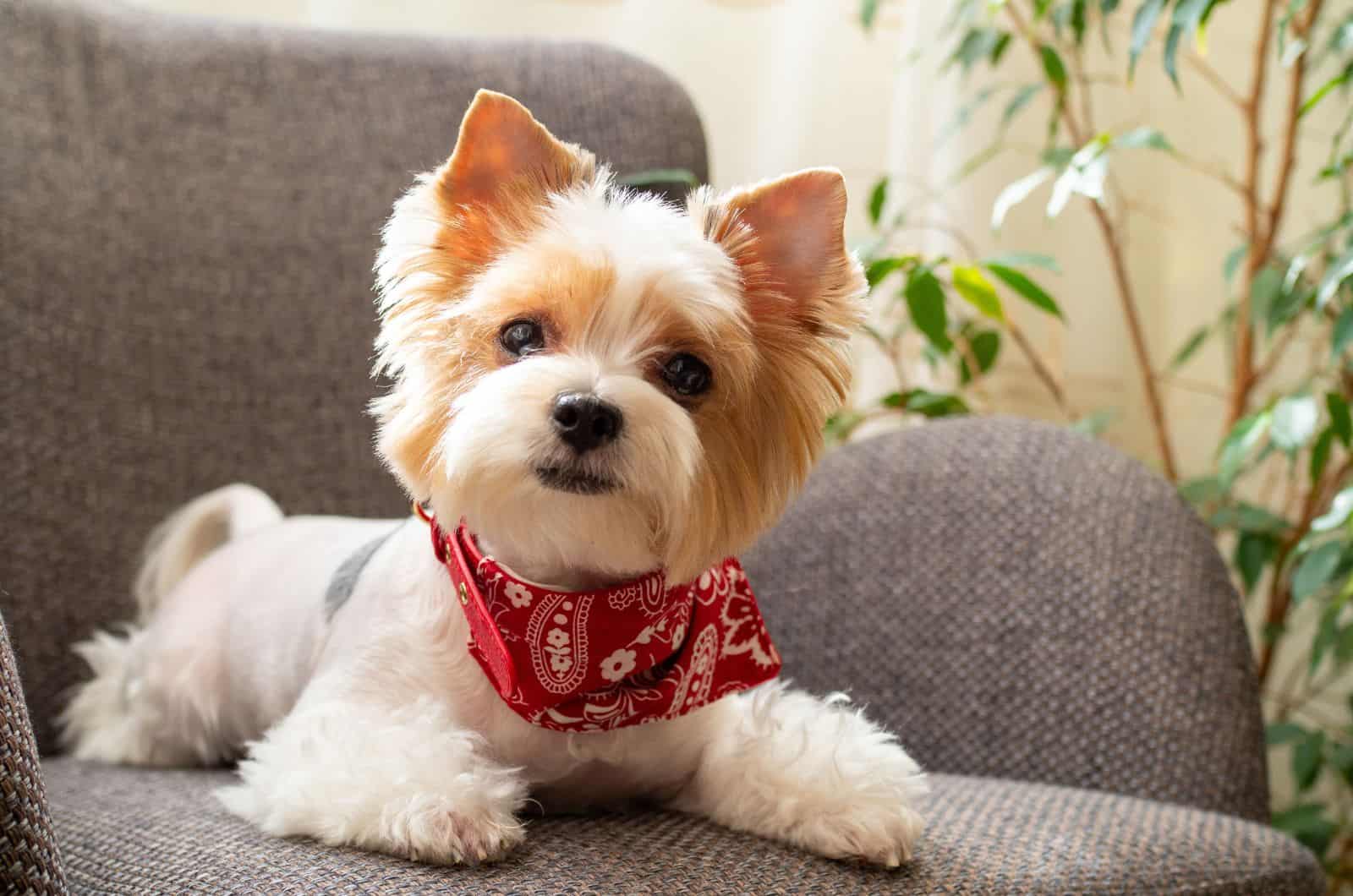 As I said earlier, the puppy cut is one of the most popular Biewer Terrier Haircuts. Besides the practical factor, dog owners like to choose it because it’s so adorable!

Yes, these toy dogs look like little puppies if their coat is cut into a puppy cut.

The adorableness factor was actually the one to blame for inventing the puppy cut. A lot of dog breeds, especially long-haired terriers, like featuring it.

But, this isn’t a 100% accurate puppy cut as with other breeds. Biewer Terriers have it somewhat modified.

Biewer Terriers will have their coat cut to two to three inches of its total length. Other puppy cuts are even shorter! Also, hair on the legs, and around the ears and the face can be kept longer. This depends on your liking.

The puppy cut is a favorite of many because it’s so simple to perform. You can absolutely do it yourself if you have good grooming tools. More on which grooming tools you’ll need to groom a Biewer Terrier coming soon. 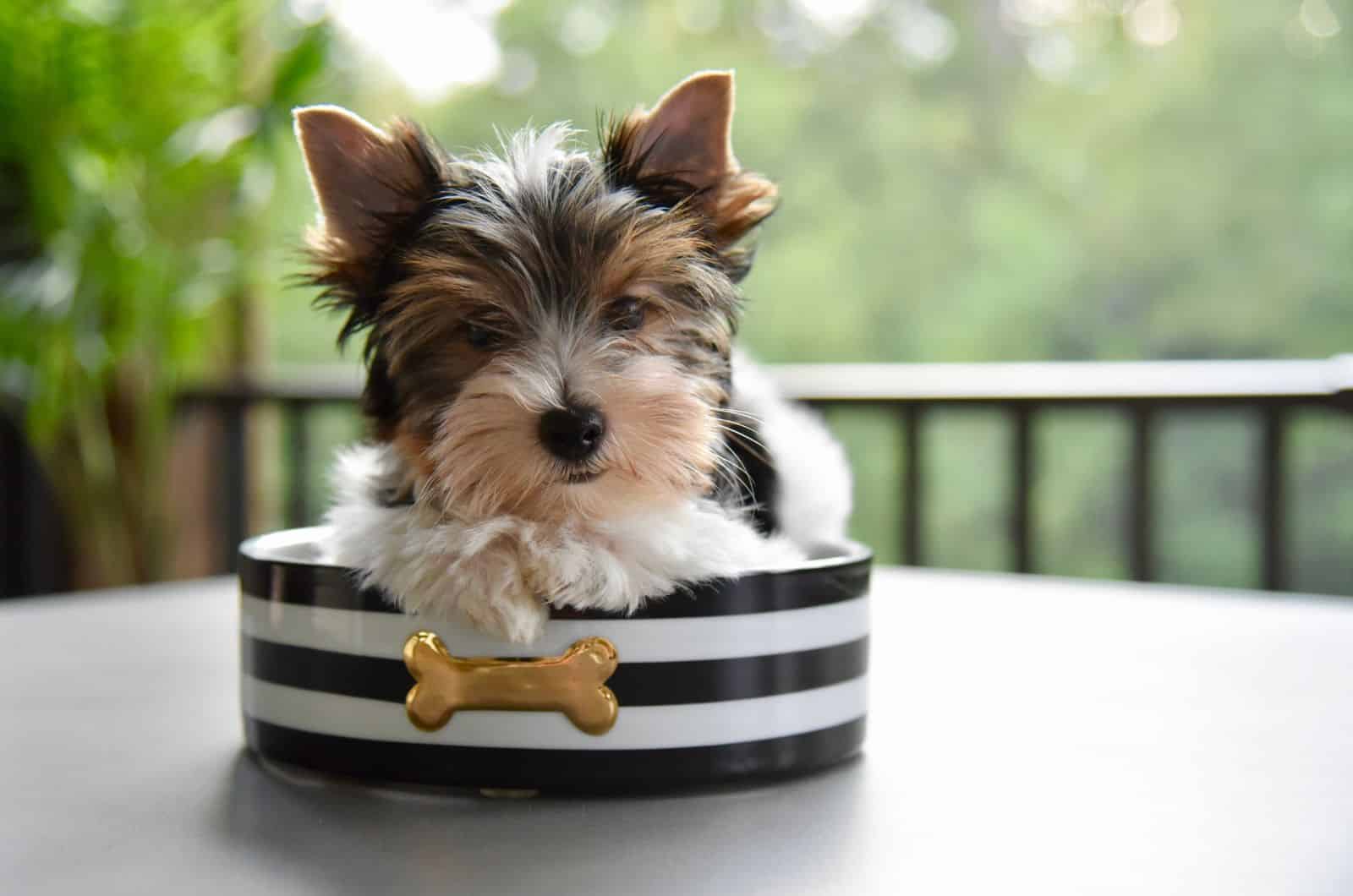 Schnauzers are known for their coarse coat, standard cuts, mustaches, and beard. You can definitely spot a miniature Schnauzer in a room full of dogs.

This popular haircut served as an inspiration for another quite common Biewer Terrier haircut – the Schnauzer cut.

Dogs featuring a Schnauzer cut will have one-inch long hair. The hair will be a bit longer on all four legs, but it will be shaped like a reversed taper. Of course, facial hair will be long, too, and your Biewer Terrier will fashion a beard and a mustache just like a Schnaus!

I’d recommend you have this haircut done by a professional. Sure, you can learn to do it alone, but it will take some time to achieve perfection.

Seeing a BT featuring a Schnauzer cut will definitely make you think if it’s a Biewer Terrier or one of the many Schnauzer mixes! 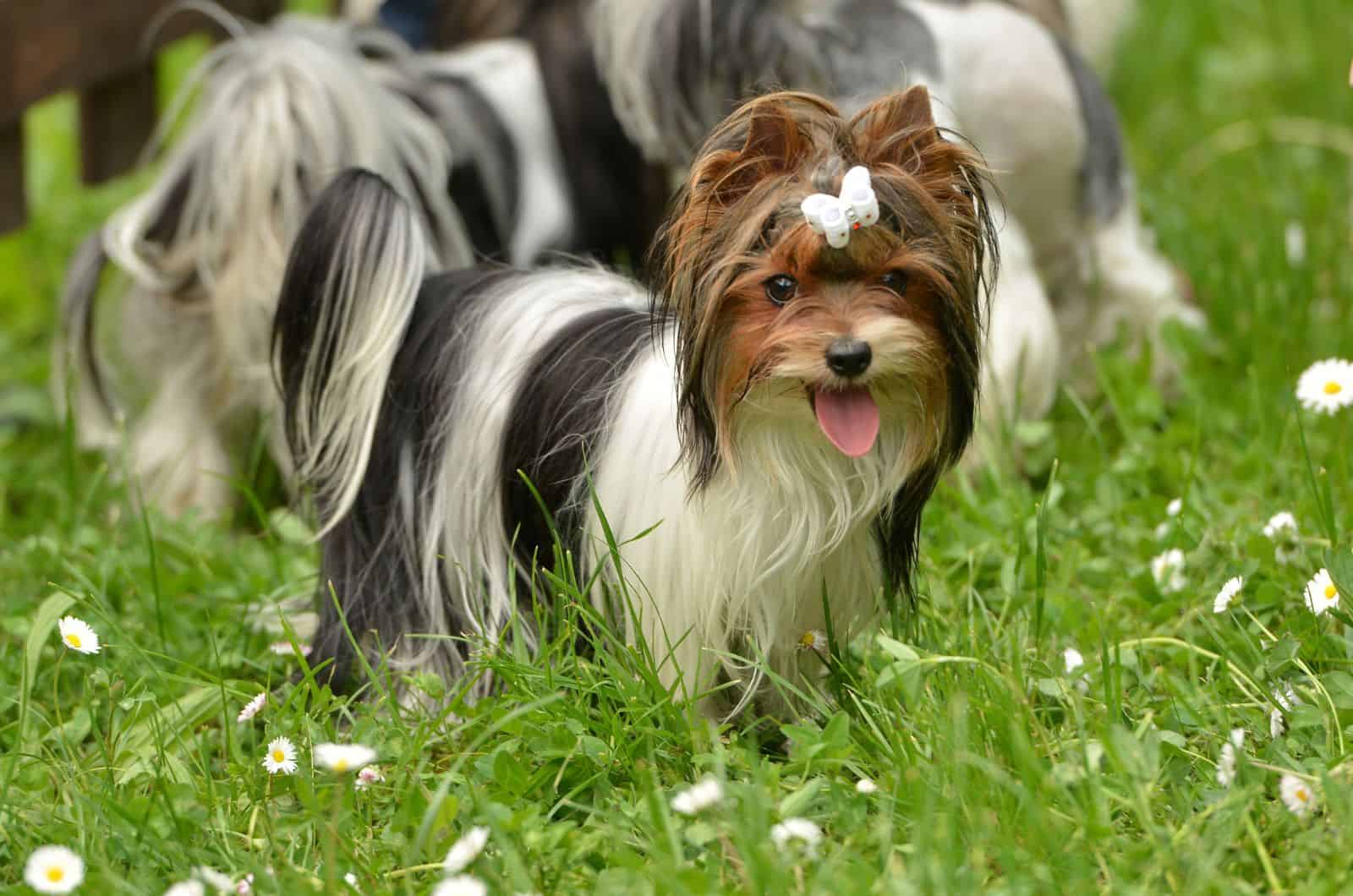 The three-layer cut is something different and rather special. You don’t see many Biewer Terriers around, especially not those featuring a three-layer cut.

This is a complicated Biewer Terrier haircut, so I suggest you don’t experiment alone at home.

Biewer Terriers with a three-layer cut will have their ears, facial hair, and head cut to shoulder length. As far as the rest of the body is concerned, the hair should be cut two inches from the ground.

Lastly, the hair on all four legs should be cut one inch or less from the ground.

As you can see, three different lengths are involved. This haircut gives more dimension to your dog’s appearance. 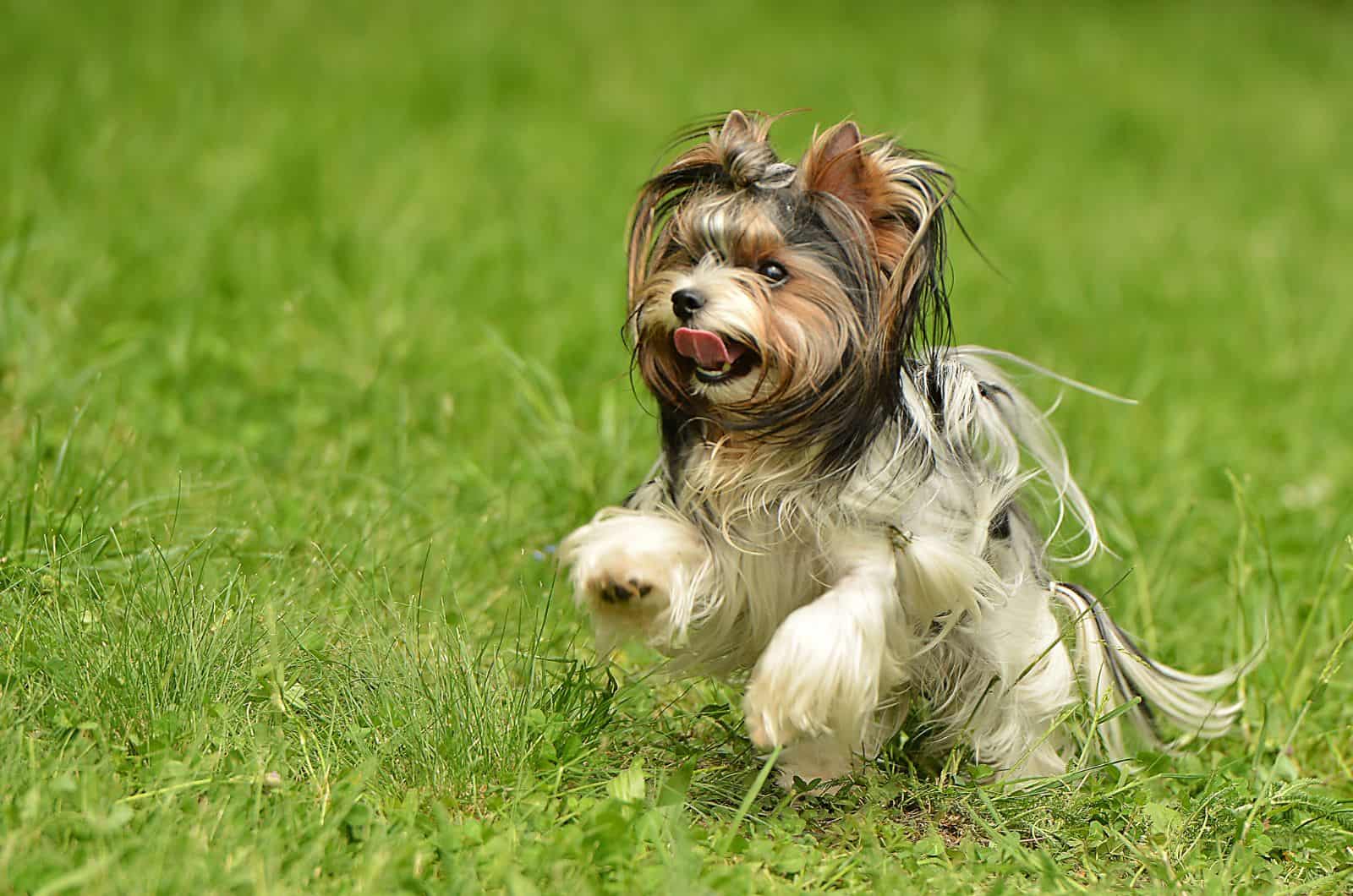 The Westie Cut has been inspired by the popular West Highland White Terrier.

This cut is similar to the puppy cut. However, it does have some differences.

Dogs with the Westie cut have shorter hair on their body and longer hair on their head. Body and leg hair are only a half inch long. Head hair, facial hair, and hair around the ears is longer, and left for the owner to customize.

Once again, let your chosen groomer perform the magic for you!

What Type Of Coat Does A Biewer Terrier Have?

The Biewer Terrier’s appearance is something truly special. These dogs already look so groomed, even if they haven’t been to the salon at all.

What’s signature for the Biewer Terrier breed is the floor-length hair that gets parted in the middle as if someone took a comb and brushed it thoroughly.

Just like with Yorkies, their hair is similar to human hair. It’s silky, soft, and fine.

As you can imagine, the coat only comes in one layer. There’s no undercoat, so the pup won’t shed crazily the way Huskies shed, for example.

When the winter comes, you should get your little Biewer Yorkie a doggy coat since they can’t stand too low of temperatures that well.

Biewers were actually developed from piebald Yorkies – one of the loveliest Yorkie colors! Their long and flowing coat comes in some pretty unique combinations.

Their head is usually gold/tan or blue/black with white, while their back is normally blue/black. White can be present on the chest up to the chin, stomach, legs, and tail.

How Often Should A Biewer Terrier Be Groomed? 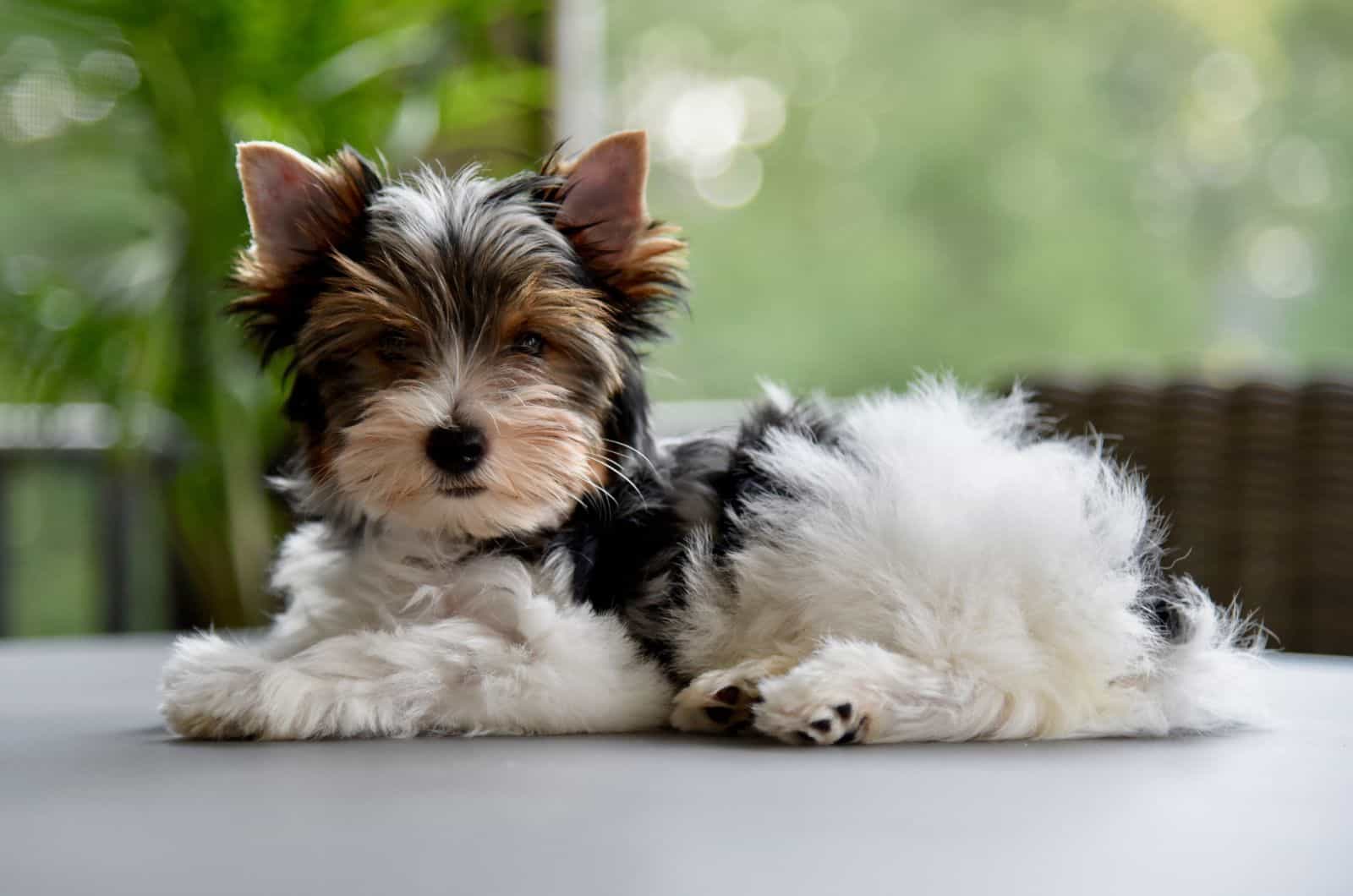 Biewer Terriers don’t shed, but they do need a fair amount of dog grooming. This low-shedding feature always comes with a price.

You should be able to commit to daily brushing; otherwise, you’re risking tangles and a matted coat with your Biewer Terrier. Tangles can really hurt your dog, and this puppy is highly prone to getting them.

So, daily brushing it is!

Good Biewer Terrier breeders will usually introduce their puppies to grooming and make them less afraid of brushes and trimmers. If a puppy has been through socialization lessons, grooming will be even easier for him. In fact, it would be a joyful occasion!

As for the hair trimming part… once every two to three months would be just fine. The Biewer Terrier’s hair doesn’t grow that fast. If you want them to maintain the same haircut, you should stick to a schedule.

Think of dog grooming as something your pup essentially needs, like good dog food. A well-groomed puppy is a healthy and happy puppy!

What Kind Of Grooming Tools Do You Need For Your Biewer Terrier?

I’m sure you’re anxious to see some grooming tips that could help you with taking care of your little Biewer Yorkie. If you’re a beginner dog owner and want to try grooming dogs, you should know that not all dog brushes work for all dog breeds.

What you use for a Poodle won’t work on Biewer Terriers, and vice versa.

As a general rule of thumb, Biewer Terrier owners and groomers who have experience in grooming them will recommend you buy some high-quality grooming essentials such as clippers, pin brushes, combs, and some sensitive dog shampoos.

Since your Biewer doesn’t have an undercoat, he won’t shed, and thus, you won’t need a de-shedding tool.

It’s always a better idea to invest some money into good grooming supplies since you’ll be doing lots of it if you get a Biewer Yorkie. 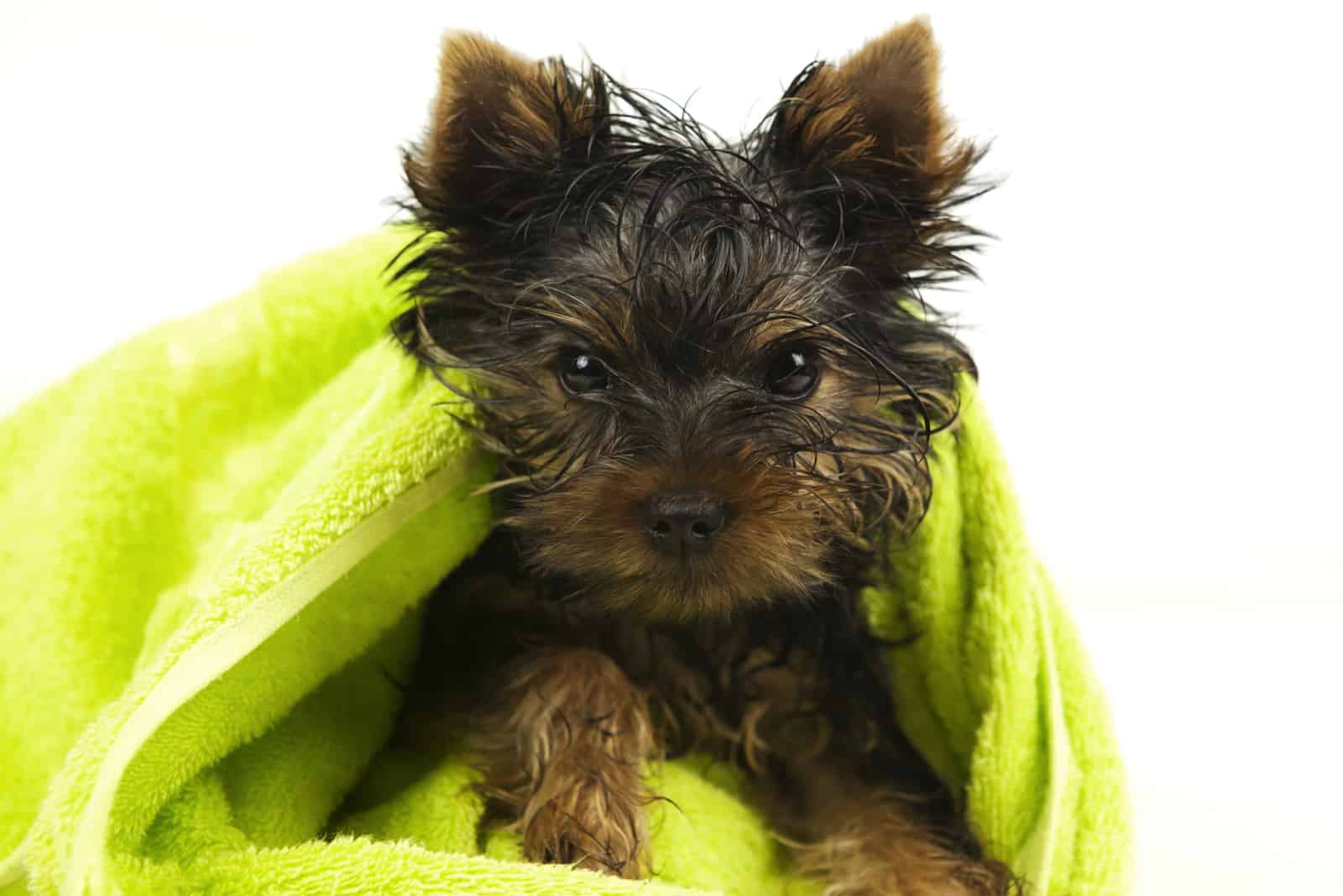 Biewer Terriers aren’t parti Yorkies or Yorkie mixes. They do look alike, but there’s a bit of a difference between these two, especially if you’re interested in participating in dog shows organized by the Biewer Terrier Club of America or the AKC.

Yorkie haircuts are similar to Biewer Terrier haircuts. In fact, these two dogs resemble each other a lot, but still, they’re separate breeds just like a teacup Maltese and a Pomeranian, for example.

You already know which Biewer Terrier haircuts are out there. Now, you’re going to learn which Yorkie cuts can be performed.

Yorkies can usually have:

You can trim a Yorkie’s facial hair, and its hair on the head, the legs, or on the tail. Each new hairstyle can be a variation including different techniques on different body parts.

Yorkies and Biewer Terriers share some popular cuts, such as the Schnauzer, and the Puppy cut. This makes these two breeds even more alike. 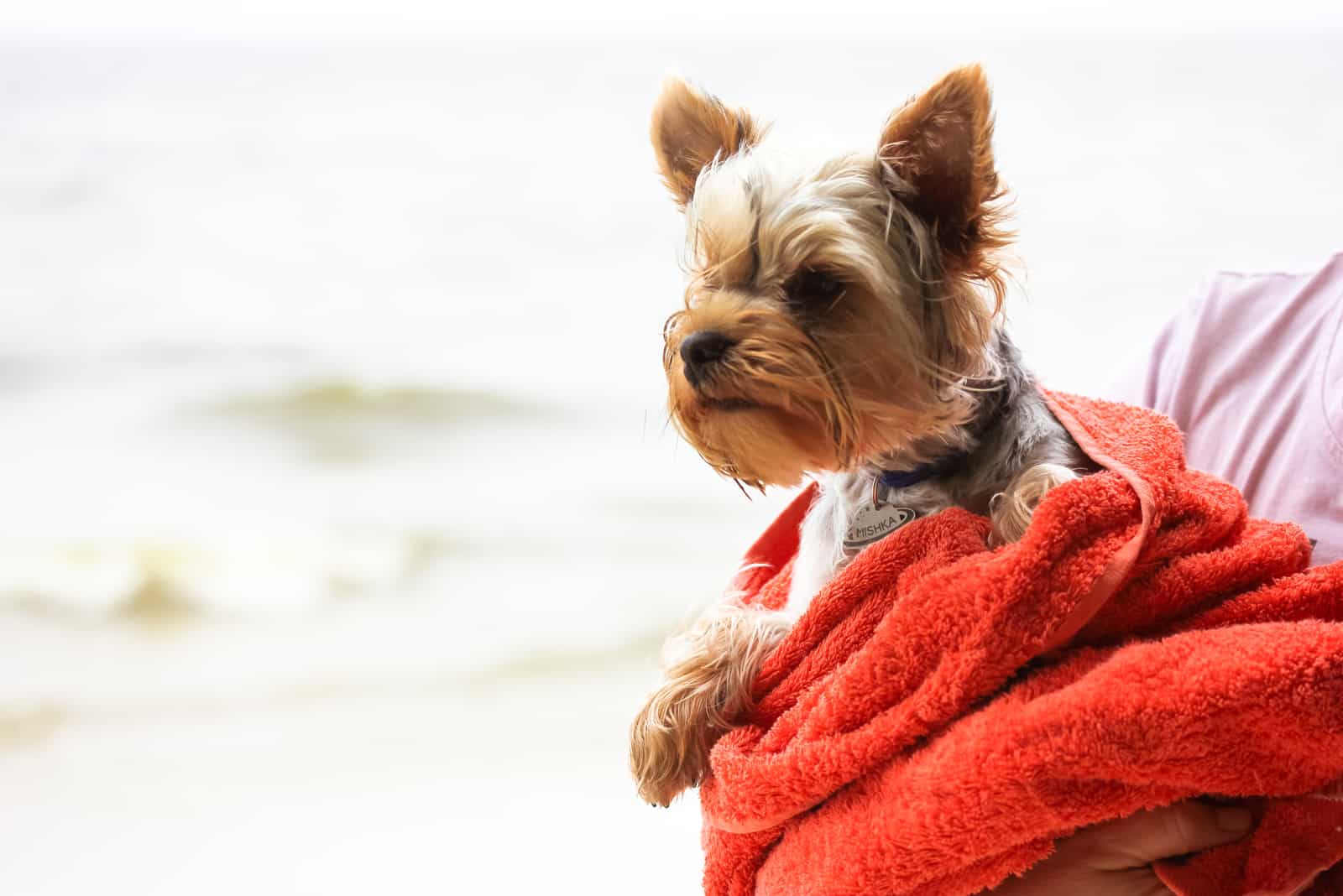 How Often Should You Bathe A Biewer Terrier?

Dog hair isn’t the same as human hair, even though Biewer Yorkies and humans share some traits in terms of hair texture and fineness. You can’t just wash your Biewer a’la Pom Pon with human shampoo. These dogs need special shampoos for dogs.

You gotta keep that gorgeous silky coat nice and shiny.

Unlike some dog breeds we know of that don’t need a lot of bathing (yup, our GSD buddies!), Biewer Terriers actually enjoy baths, and should have them often. It’s the only way to keep their coat nice and glossy.

Of course, in between baths, keep your dog’s potty area clean by using a little bit of water or dog wipes if it gets dirty.

I recommend you also use a canine conditioner so it will be easier to brush your dog the next time.

Biewer Terrier bathing is almost the same as Yorkie bathing, so you might want to catch up on your reading.

What you shouldn’t do is over bathe your dog because he can develop dry and patchy skin, and that could lead to many health problems related to skin. Learn more on proper bathing here.

I know you’re thrilled to learn this, and so am I. The Biewer Yorkshire Terrier is really proud of its single-layered coat that doesn’t shed, meaning that the coat won’t cause reactions in people prone to allergies.

If you want to bring a Biewer Terrier puppy into a home where sneezing happens the moment someone even thinks of getting a dog, you can absolutely do that. Your family will be happy for bringing home a lovely pooch that will keep the sneezing far away.

Which Biewer Terrier haircut is your favorite? Will you try to do them alone at home, or will you let your Biewer Terrier get handled by a professional groomer?

As you can see, some haircuts (like the Puppy cut) can easily be mastered at home. Still, other popular choices are better left to professionals.

I’m not saying that grooming Biewer Terriers is hard. It really isn’t. You can learn everything from handy books written by licensed groomers. I just want to point out that you should really make sure that the Biewer Terrier you own is a good-looking pooch.

How pawmazing is that?

8 Reputable Biewer Terrier Breeders Across The US (2022)

how often should you bathe your puppy – Relevant Archive

[…] How Often Should You Bathe A Biewer Terrier? Dog hair isn’t the same as human hair, even though Bi… […]