It seems that Doodles of all kinds have taken over the world of dog-lovers these days, ever since 1989 when a Labrador Retriever was crossed with a Standard Poodle to create the Australian Labradoodle.

The breeder credited with this feat, an Australian by the name of Wally Conron, provided guide dogs for sight-impaired people and was attempting to create an allergy-free breed.

After two years, he finally managed it, sparking the Doodle craze that spread worldwide.

You might ask, What is a Doodle? Well, following Mr. Conron’s successful experiment, any dog crossed with a Standard Poodle has earned the right to be called a Doodle!

It has to be said, though, that there are many alternative and amusing names for these breeds.

One example is the Golden Mountain Doodle, which is a Golden retriever, Bernese Mountain dog, Poodle mix, first developed by Swissridge Kennels in 2013!

Following in their footsteps is a newer member of this exclusive club, known as the Australian Mountain Doodle.

We’ll find out what makes them so popular, how much care they need, what health issues to look out for, and whether or not they make great family dogs.

Contents show
1 What Is An Australian Mountain Doodle?
2 What Are They Like In Terms Of Temperament?
3 What Do They Look Like?
3.1 Do They Need Much Exercise?
3.2 What Health Issues Should We Be Aware Of?
4 Are They The Perfect Family Dog?

What Is An Australian Mountain Doodle? Pay attention now, as it could get complicated. To make an Australian Mountain Doodle, you need to mate an Aussiedoodle with an Australian Bernedoodle.

So far, so good, but you might not be familiar with either of the parent breeds, so here’s a quick explanation:

There, not so difficult after all, was it?

The resulting breed has all the best bits of the Poodle, Bernese, and Aussiedoodle combined! 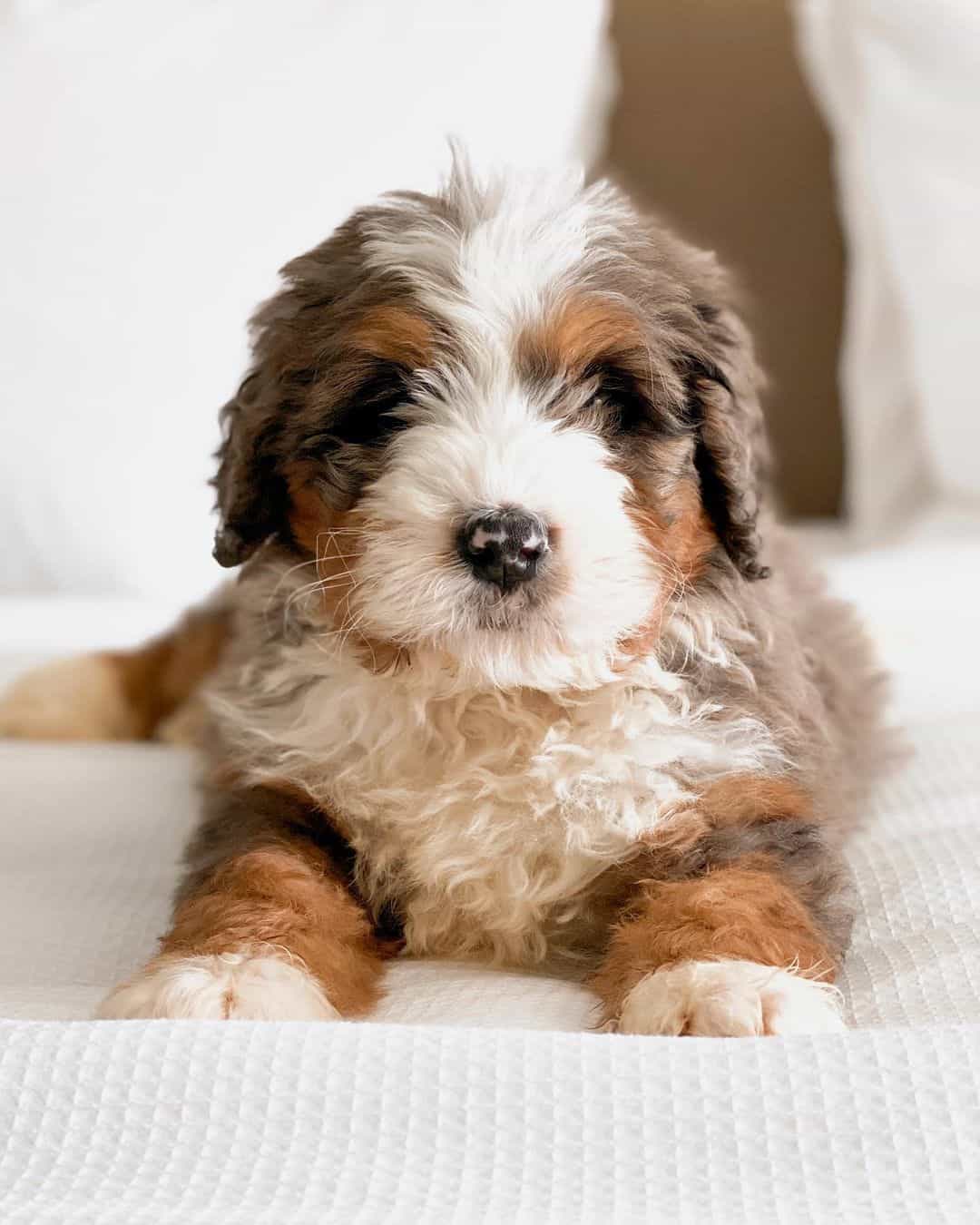 They are friendly, eager to please, intelligent, and highly trainable. They do have a tendency to act the clown at times, and they love to be around people, especially kids.

In terms of energy level, they are pretty mellow and easy-going. They won’t make the best watchdogs but will undoubtedly protect you if the need arises.

It’s difficult to predict an individual dog’s personality exactly, but with all those genes being handed down from some super-loveable breeds, you can be pretty sure that your Australian Mountain Doodle is going to be something special. With a coat that is straight, curly, or something in between, they can be a bit of a fluff-ball. Much of this depends on the generation, as first-generation dogs can revert back to the parents’ coat.

Colors vary (and a litter of puppies can have a complete mixture!) between merle, black and white, black tricolor, blue merle, and chocolate, with certain breeders focusing on particular color combinations.

The coat appears fine but feels quite thick for a single coat (they don’t have a top coat and undercoat, like some dogs) though it can be shaved or trimmed without causing damage.

This coat will need regular brushing, with experts recommending that you brush them at least once a week or even every day in the case of very curly coats.

This is to stop them from matting, which can be painful and causes skin problems. As well as brushing, it’s a good idea to book them in for professional grooming every couple of months to reduce the risk of tangles.

The Poodle genes make this a hypoallergenic (allergy-friendly) dog but bear in mind that no dog is completely allergy-free.

Most allergic reactions are due to proteins in the dog’s saliva, which attaches itself to the dander in the coat rather than the coat itself.

Some dogs have more of these proteins than others, such as Labradors (who produce more sebum, an oil secreted in the base of the hair follicles that protects the coat and makes it oily).

In contrast, Poodles and their crossbreed offspring have very low levels, which is why they are good for mild allergy sufferers.

As for size, the Standard Australian Mountain Doodle stands an average of 21–28 inches at the shoulder and weighs from 50lbs up to 95lbs.

Some breeders will offer Mini Australian Mountain Doodles, with a height of 19–22 inches and weighing between 30 and 40lbs.

Do They Need Much Exercise?

Being a medium energy dog, they’ll be happy with a gentle half-hour walk each day, and some quality, energetic playtime once a week.

They tend to adapt to your lifestyle so will be equally content at home as outdoors, but they do enjoy a good walk.

Mental stimulation is vital, as they are an intelligent breed who can become easily bored. Be sure to keep them entertained when they need it, or they may misbehave and become destructive.

On that note, it’s never a good idea to get a puppy (of any breed) if you plan to be out at work for eight or nine hours a day.

Dogs should ideally never be left alone for more than four hours at a time as they can become anxious and stressed.

Different breeds deal with this in their own ways, some better than others. But whenever possible, if you can’t take them with you, try to have someone sit with them or at least check in from time to time.

What Health Issues Should We Be Aware Of?

The good news is that crossbreeds generally have far fewer health problems to contend with than purebred dogs.

There are a few to watch out for, but a reputable breeder will work hard to eliminate the chances of these being passed on and will even offer guarantees against certain conditions for a period of time.

To find a list of possible problems, we need to look at the parent breeds, where you might find conditions such as those shown in the following list:

Now, this isn’t to say that your dog will definitely suffer from any of these. It is purely to give you an idea of the potential diseases and conditions that could present themselves. The best way to reduce the risk is initially through contacting a reputable and respected breeder for your pup.

Secondly, make sure they have a healthy, high-quality diet and keep treats (human foods such as figs, fish sticks, and Vienna sausages) to a minimum. Give them the exercise they need and keep them clean, with plenty of regular grooming.

Don’t always wait for symptoms to show before making a trip to the vet. Frequent check-ups are more likely to find any problems early. Treatment can then begin quickly, which gives them the best chance of recovery and survival.

With a good diet and care routine, there’s every reason to expect your Australian Mountain Doodle to have a lifespan of up to 15 years.

Are They The Perfect Family Dog? We’ve been over the facts, and they speak for themselves.

But we can summarize it all here and build a picture of just how amazing these dogs are.

First of all, who could resist that curly coat and those eyes, when they just want to be your best friend?

By all accounts, they are brilliant with children, though it pays to educate younger kids as to how to behave around puppies as all pups can be nippy and excitable at times.

This breed can be comical, loyal, playful, mellow, and loveable. They will need attention and love, be fussed over and petted, and kept occupied to keep their minds busy.

They require a moderate amount of grooming and care, with expert grooming several times a year.

Exercise shouldn’t be too much of a challenge as you’ll only need to set aside around thirty minutes of your day, though they’ll be perfectly happy if you go for longer.

Just don’t overdo it, though, or they might decide they’ve had enough!

The key to a good relationship with any dog is early training. The excellent ‘trainability’ qualities of this breed makes this an easier task for you.

Be sure to use a firm hand and tone, as they may be a bit wilful at first until they understand what is required of them.

In the end, it’s up to you to decide whether the Australian Mountain Doodle is the perfect family pet.

But from what we’ve learned, the answer seems clear! 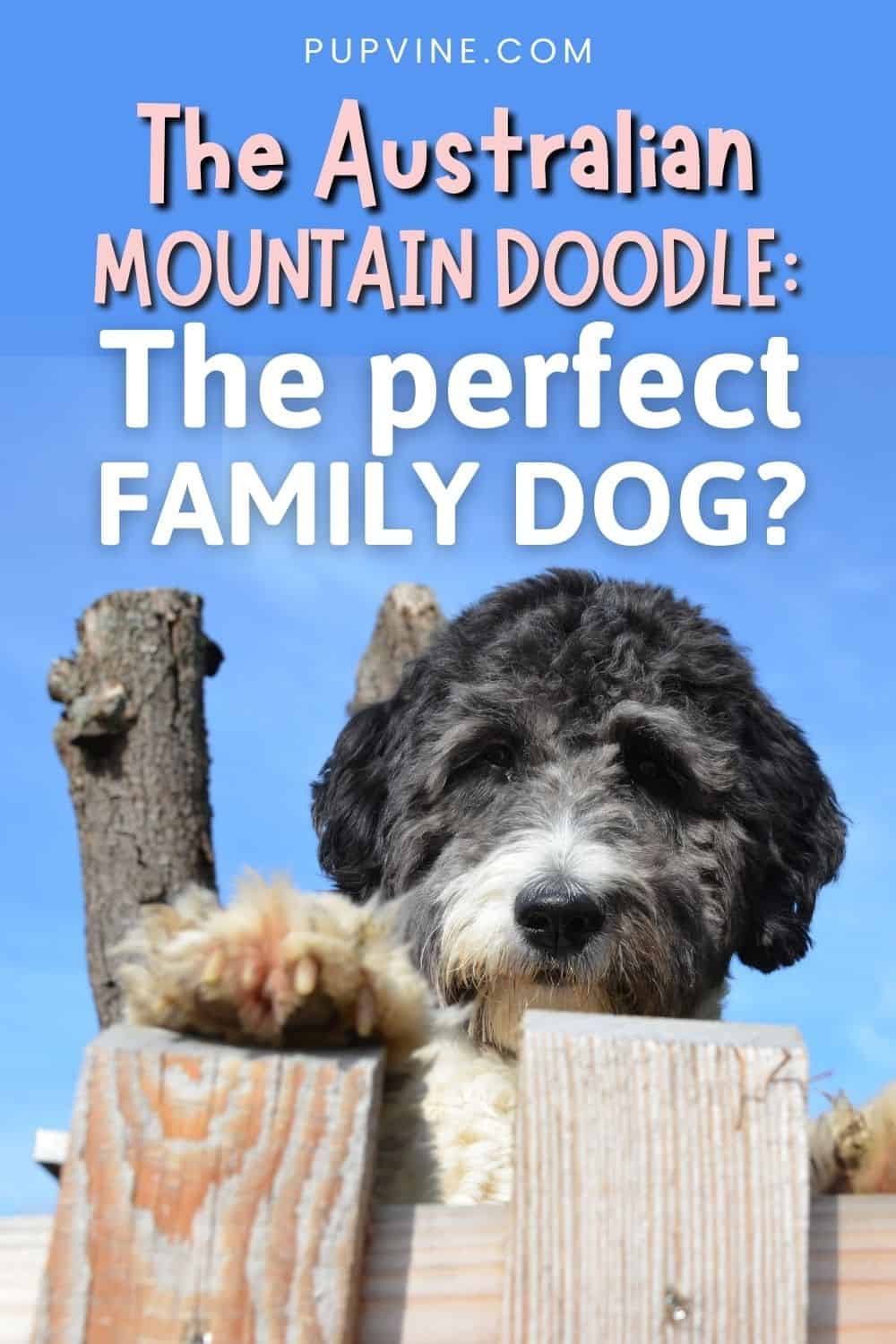 […] quest involved mixing different breeds to find one that embodied all the great physical qualities of wolves, without the negative […]