Designed breeds XXL Bully and XL Bully are very impressive dogs, made as a larger variant of the standard American Bully.

But did you know that XXL Bully is an unofficial type, not recognized as purebred by any major kennel clubs or registries?

For both, the goal was to breed an impressive canine with a muscular body and the behavior of a saint, but how many differences do they have at all?

This article will compare XXL Bully Vs XL Bully, with the aim to help you learn the differences and similarities.

XXL Bully Vs XL Bully: Do They Have The Same Origins (Bulldogs And Terriers)?

To make a bigger XXL version, breeders included a Bull Mastiff in the mix. 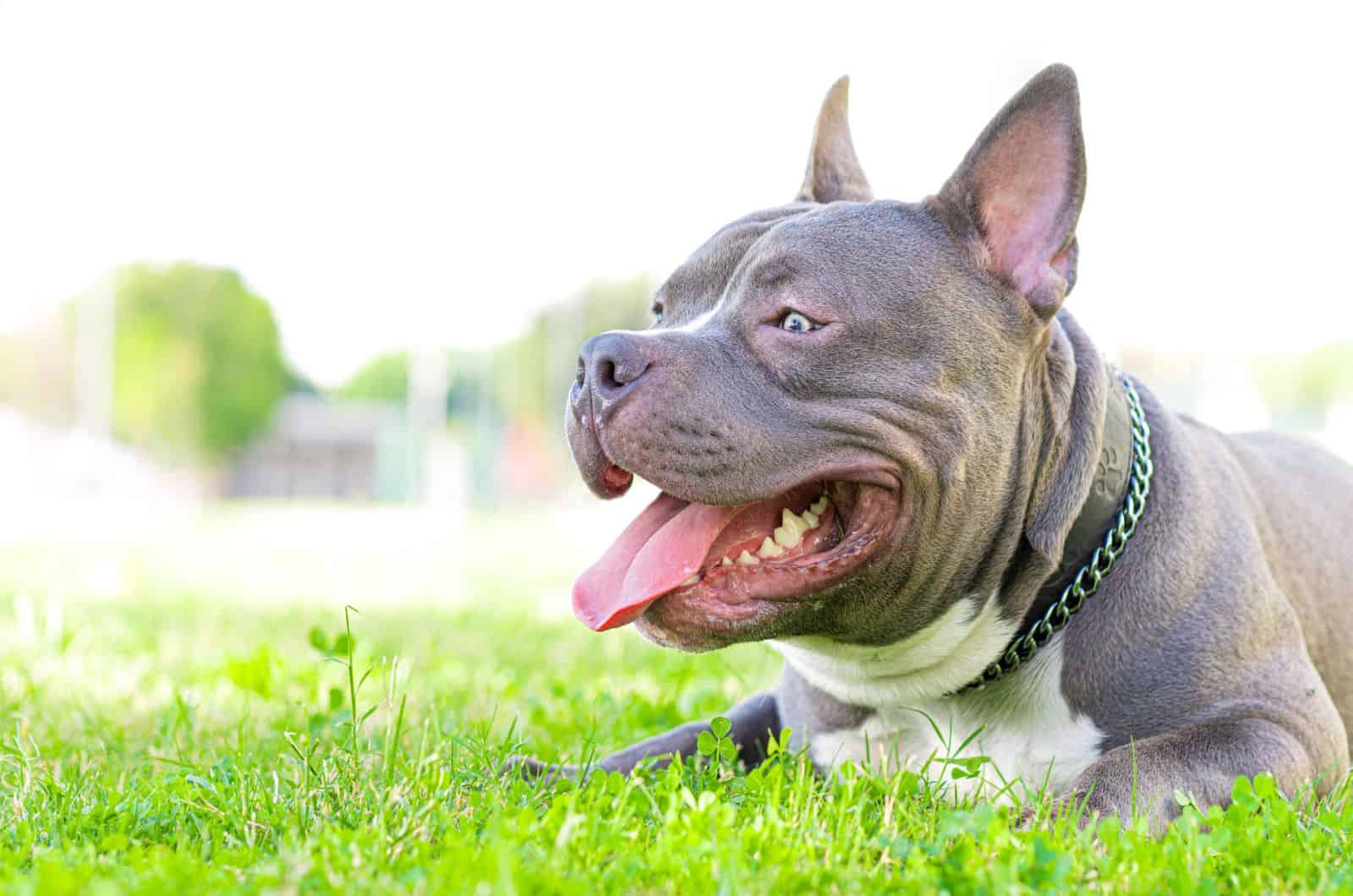 The main physical difference between these American Bully breeds is their size, but let’s see some specifics about both of these new breeds.

• Males: must measure 51 to 57 centimeters at the withers

For more information, take a look at the American Bully growth chart.

If trained properly, most of their weight is muscle mass.

The American Bully XL and XXL have similar key attributes, but also some differences:

• Specific heads – Head is usually of medium length but much wider. The XL Bullies have a head bit longer and narrower than the XXL Bully, whose head is more round and broadhead.

• Short muzzles – They are very short, wide, and squared, or rounded. They breathe heavily, so be wary about intensive training.

• Heavy musculature and bones – Their bodies are full of muscles and much heavier than other breeds of similar size.

• Body shape – The American Bully XL is more athletic, while the XXL Bully is more muscular and sturdy.

• More skin on their faces – As they are growing, their wrinkles become more visible and they drool a lot!

• Eyes – The XL has small to medium-sized oval-shaped eyes usually closer together, while XXL’s eyes are further apart. 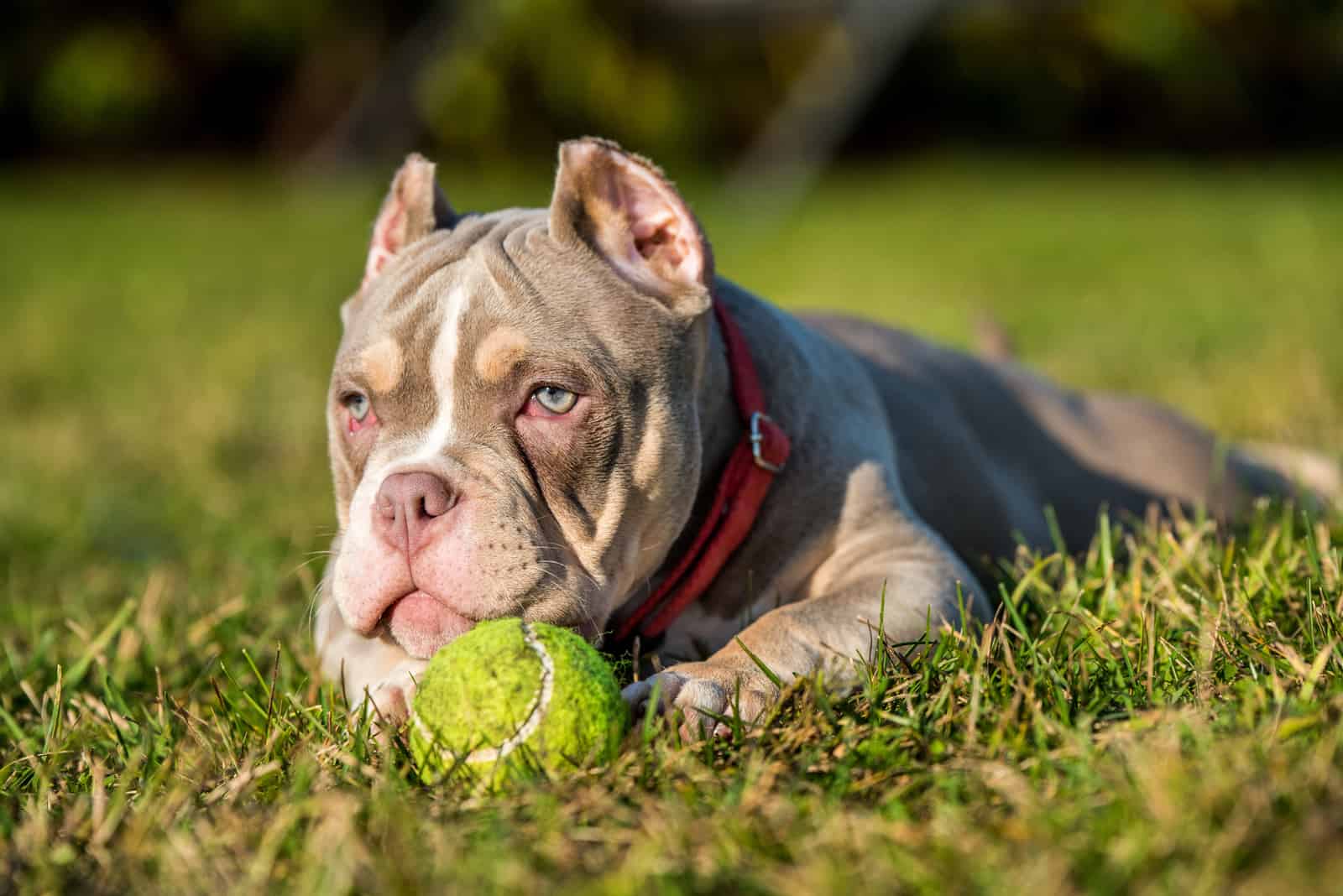 Both the XL and XXL American Bully breed shed the whole year and need regular brushing to remove the dead hairs and keep their fur shiny and healthy.

By the standards of The United Kennel Club, the American Bully XL can be in any color and pattern, except merle or albino, which are the results of genetic mutations which lead to eye diseases and deafness.

The most popular colors are:

• Blue (which is actually gray, in many shades). These dogs usually have a blue nose and a white marking on their chest.

• Black (often a very dark shade of blue). True black has a black nose and black skin on the inside of their ears and around their mouth.

• White (the rarest). Usually, white is present through white patches on any color of the dog.

Since the American Bully XL and XXL are both made up of many breeds, they have a rich variety of color combinations.

The average life expectancy for an American Bully XL and XXL is 12 to 16 years.

The XXL American Bully can become too fat, so you should watch its diet to avoid putting pressure on the joints, which leads to arthritis and other joint-related diseases such as hip dysplasia and/or orthopedic problems.

Obesity can affect their heart too.

Many American Bullies also have problems with their skin if not brushed enough. Hair loss and moist skin can lead to bacterial dermatitis. After dermatitis, the most common skin problems are seborrhea and eczema.

Among other health problems, your dog can suffer a cherry eye, ectropion, and/or entropion, while the shorter muzzled dogs can suffer from Brachycephalic Respiratory Syndrome.

They can be allergic to pollen, dust, some food, mold… 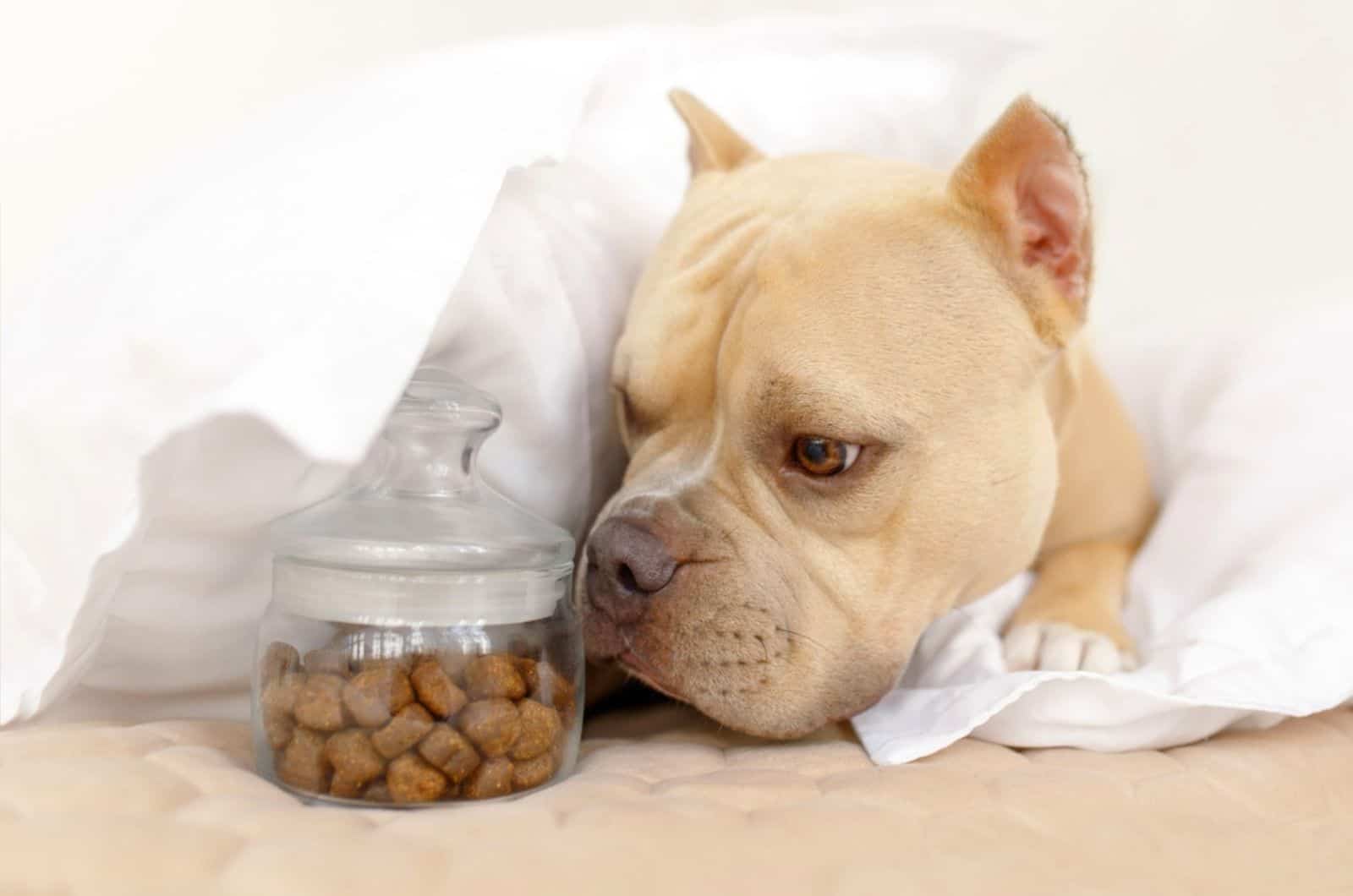 You can also give them a portion of balanced dog food, but avoid dog foods high in carbohydrates or fat which can contribute to health issues.

You probably want your Bully to have a long lifespan, so if your family pet is too fat, ask a dog nutritionist for some healthy diet tips proper for his body type.

Don’t skip the vitamins and minerals for optimal health and growth.

• Vitamin A helps secure healthy skin and a shiny coat

To find out more, you can check our American Bully feeding chart.

The American Bully XL, as well as the XXL, like to socialize and require a lot of exercise each day to avoid becoming bored or destructive indoors. Dog owners should spend at least an hour daily playing with their companion dogs, or just doing brisk walks.

Pulling weight and fetching are great games that keep you both engaged and develop a bigger bond between you and your family dog.

Swimming is also really beneficial for developing a dog’s strength and endurance while exercising all the body muscles.

If your dog is too fat, let it walk upstairs, that will help in weight loss.

Overall, even if they look intimidating, the American Bullies XL and XXL are excellent dogs, very sociable, patient, and protective around their family. They are great guard dogs but need lots of love and attention to stay well-behaved.

They are a good choice for families with children, but even if they are not aggressive, their massive size means that you must be sure to keep an eye on them while playing with kids so as not to hurt them accidentally.

They are funny and playful, and very good around other dogs and different animals.

But, keep in mind that all variations of the American Bully dogs can be dangerous if improperly raised or bred. Bully breeding is a topic on its own that should be thoroughly analyzed before welcoming this Bully dog breed.

Are XX And XXL Bullies Aggressive? 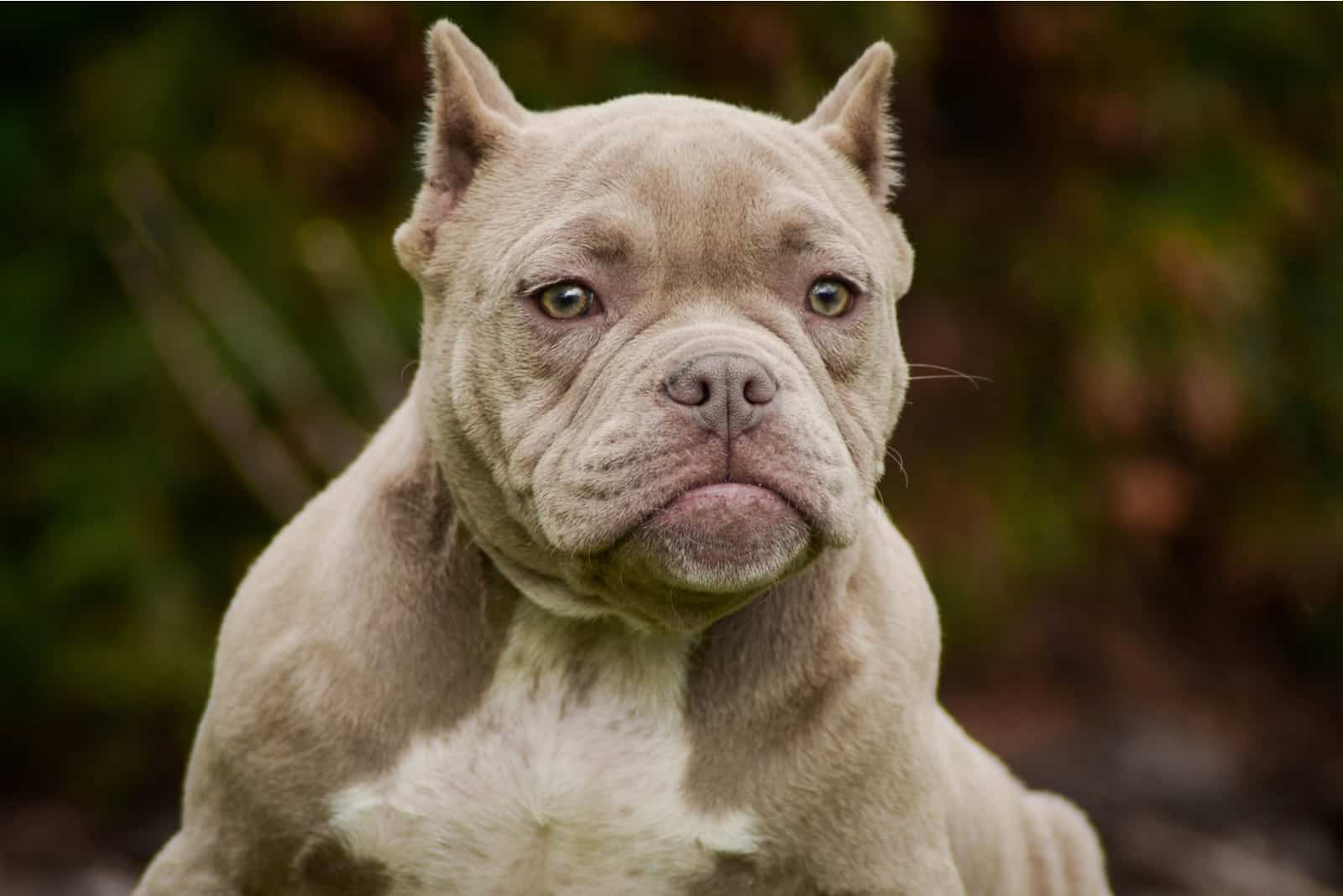 Unlike Pit Bulls, Pit Bull Terriers, and American Staffordshire Terriers, the American Bullies XL and XXL are not considered dangerous or aggressive dog breeds. Of course, they will protect their family if needed, but they are purposely bred with a friendly temperament.

So, if you are looking for a mean machine, notorious and ready to fight for money or show, XL and XXL Bullies should not be your choice, because these family dogs like to socialize.

Both dogs are stable, balanced, but also exuberant, as they don’t have such an enormous weight to throw around.

Breeders were working on their patience, so you won’t have a problem training them.

XL and XXL American Bully are intelligent and eager to please, just use positive reinforcement techniques, and they will repeat good behavior.

Never ignore their bad behavior, correct it immediately, be firm and consistent, but don’t be harsh.

The American Bully XL and XXL typically cost more than Standard or Classic Bullies, but there are prices for every pocket, from $2,500 even up to $50,000 for a selectively bred puppy with a special pedigree.

The bigger the Bully the more it will cost, especially if it comes from famous parents.

Some combinations are especially appreciated among the American Bully breeders, such as if you find pedigrees with Razors Edge, Remyline, Kurrupt or Gottline, Kurupt bloodlines.

Where To Buy XL And XXL Bully

XL and XXL American bully puppies are often sold in pet stores, which is a recipe for an ill dog, so choose reputable American Bully breeders instead.

Good breeders have in mind certain features desirable in a breed, which can take decades of research before breeding different bloodlines for the desired results.

Some of the best U.S. kennels for XL Bullies are: Monster Bully Kennels, The Incredibullz, Burleson Bullies, Top XL Bullies, while MVP Kennels and Gator Head Bullies are specialized for XL and XXL Bullies.

How To Recognize A Good Breeder 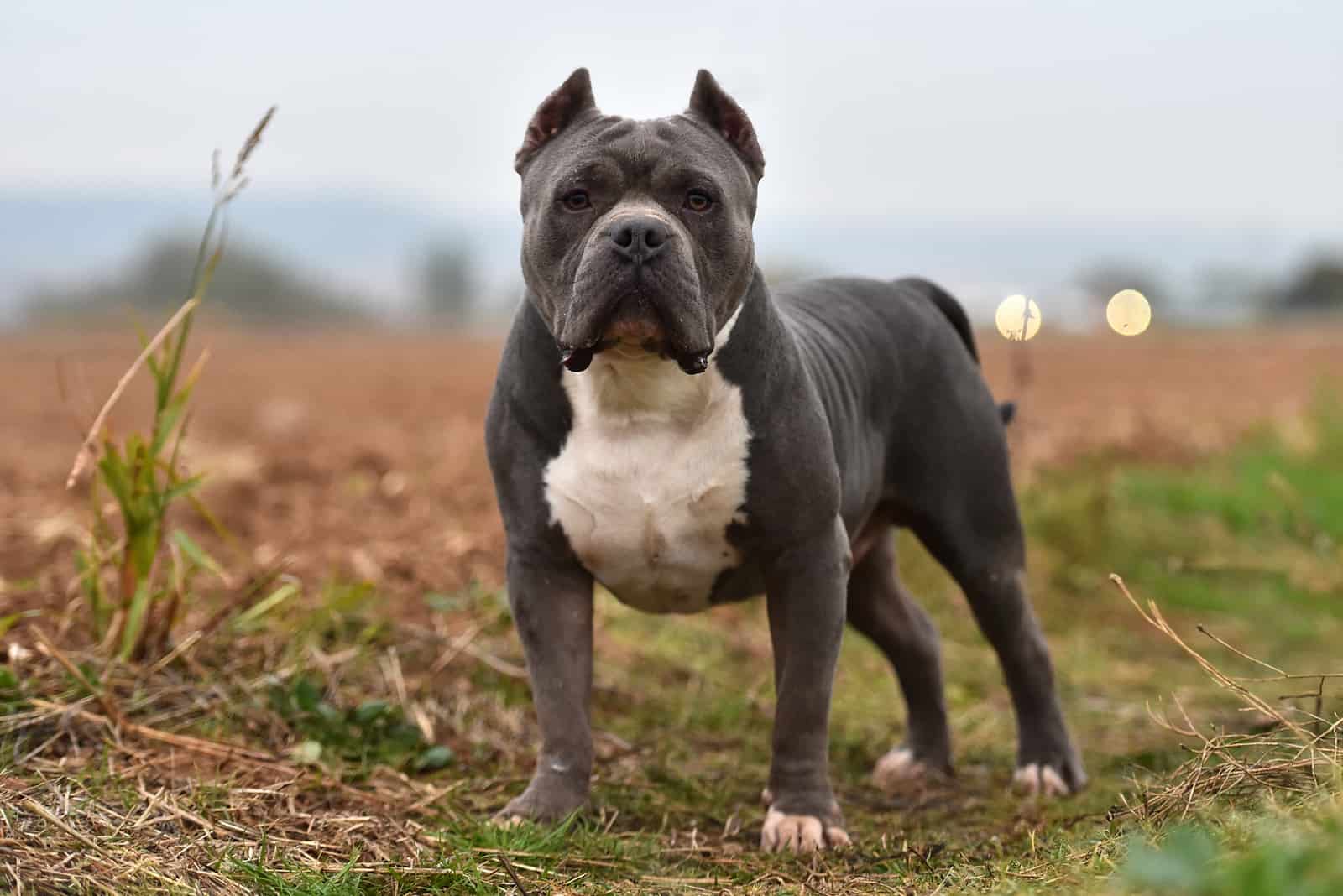 Real dog lovers will ensure that their kennel has:

• Ability to answer all your questions and help you with tips

• A good contract for both sides

Only later, in 2013, the United Kennel Club registered this new breed, but not all of the subcategories.

The XL version is accepted by some institutions, but the American Bully XXL – the largest among all categories of this breed, official and unofficial, still needs to prove itself.

The main difference is their size because XXL is combined with the Bull Mastiff, whose influence makes this king-size dog more complicated to breed. Some people use Cane Corso in the mix.

Yet, they are both bred to be great family pets and excellent guard dogs, so if you are trying to decide on an XXL Bully or XL Bully, don’t just buy one to prove yourself as a “tough guy”.

Or do, and watch them drool and smother your enemies “to death”.

Exotic Bully: What You Need To Know Before Buying Your Pup

Blue American Bully: All The Breed Information You Need

[…] Find out more on the differences between the XL Bully and XXL Bully. […]

Top 7 Pitbull Breeders In Ohio: Get Your Nanny Dog From ‘Em - PupVine

[…] the finest pet supplements for XL Pitbull and XXL Pitbull pups, they rear young Pitbull puppies for sale in Ohio on a premium raw food […]

9 Pitbull Breeders In Florida With A Good Reputation - PupVine

[…] and Jari, the kennel’s proprietors, breed XL as well as XXL Pit Bulls and the XL and the XXL American Bullies. They take great satisfaction in having the best white Pit Bull and XL champagne females in the […]