The magnificent Sarabi dog is a notorious ancient breed that carries a mystical aura of a great fighter that is not afraid of anyone.

This does not surprise us. Legend says that it is a descendant of the famous Peritas, a dog that saved Alexander the Great from certain death.

Many archeological artifacts prove the fact that this breed has probably been among us for more than 3000 years.

The Sarabi Dog has many positive traits, so let’s find more about this gentle giant.

What Is A Sarabi Dog? 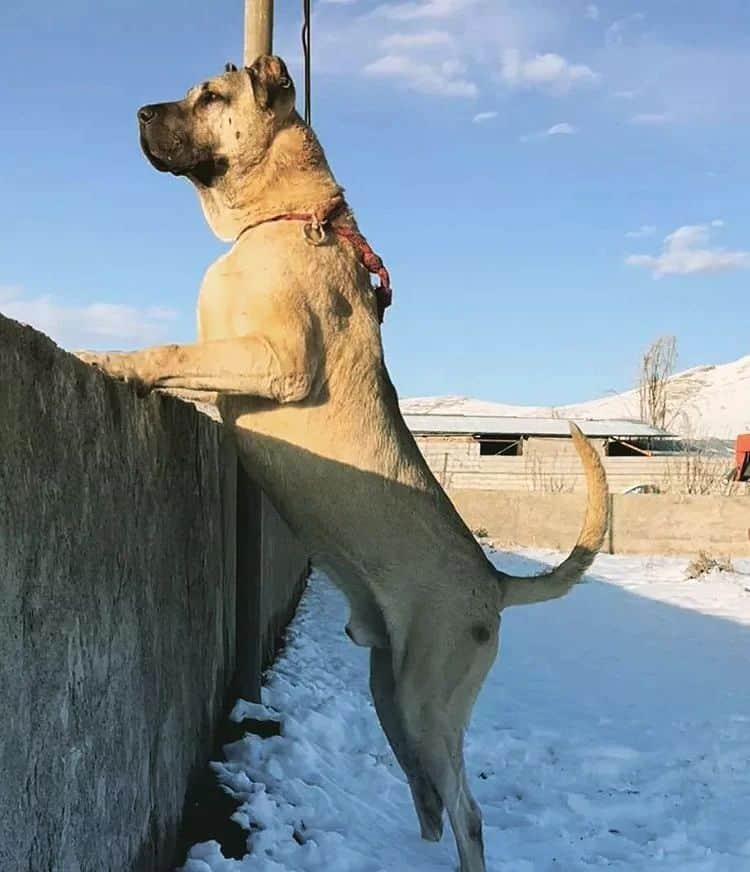 The Sarabi is one of the largest and strongest dogs in the world, according to the American Kennel Club. You can’t find much information about it on Wikipedia, so we have decided to gather all the relevant information from elsewhere.

The Sarabi is proclaimed to be a national dog of Iran, due to the fact that Iran is its land of origin. Nevertheless, its popularity is biggest in China, Russia, and the USA.

The Sarabi Dog started its journey in ancient times. Since then, it has traveled through history under different identities.

There are other names which tell us a lot about this dog’s vocation and origin. Sometimes it is called an Iranian Shepherd Dog or Iranian Mastiff. Iran’s neighbors are also not willing to deny their right to this breed. They will call it the Azerbaijan Mastiff.

In Turkey they like to call this dog a Turkish Kangal. It is open to discussion if they are the same breed or not.

Considering how old the breed is, it is no wonder that this dog appears under many alter egos.

Some say that this dog originates from the cradle of civilization –the Middle East. Ancient Persia was a place where the first organized societies arose which is about the same place that the Sarabi Dog came from.

A region called Iranian Azerbaijan is divided into four smaller regions – West Azerbaijan, East Azerbaijan, Ardabil, and Zanjan. Throughout history, this part of the world had many rulers and, therefore, was part of different countries in the past.

Our dog was born in the region of East Azerbaijan. This province today is located in northwestern Iran.

To be precise, in East Azerbaijan there is a county which is famous for two interesting facts.

First, it is a place where beautiful and expensive Persian rugs are manufactured. Second, it is the exact place after which the Sarabi dog got its name. As you can guess, the name is Sarab county or Sarab.

Sarabi Dogs are one among the several Mastiff breeds. The first association with the word Mastiff is a “big dog”. That leads us to the belief that these dogs are actually one of the molossus dog breeds.

Molossers are among the oldest breeds of dogs. They were named after the Molossian kingdom from ancient Epirus. These dogs are massive and intimidating.

Related: Decoding: Are Bears Related To Dogs? Plus 10 Bearlike Dogs 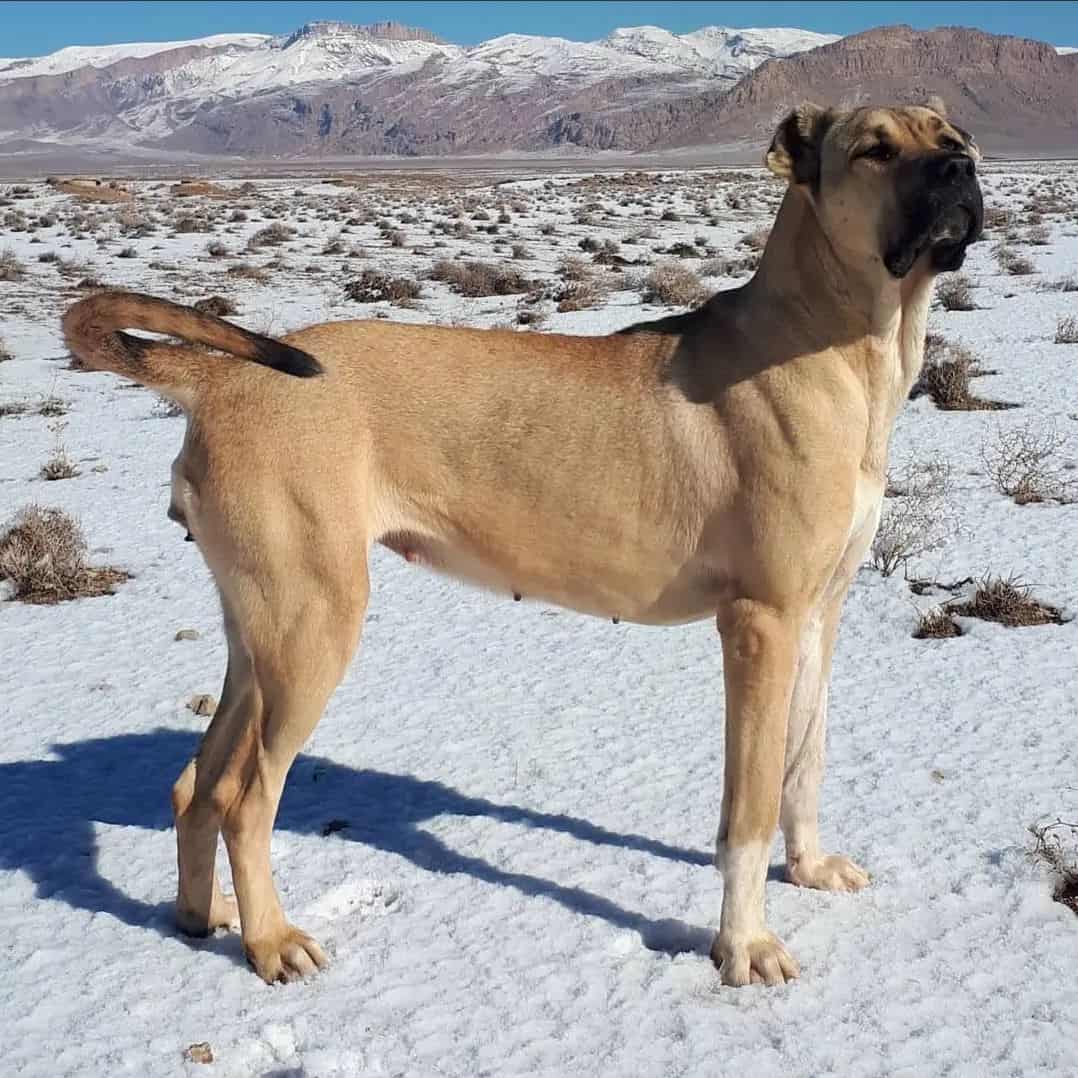 The first thing you’ll notice about this dog is that it is a giant. Everything on this dog is big as in most mastiff dogs.

It has a huge molosser head and a wide mug. The mug is medium length. The chin is not very prominent.

The upper lip is somewhat hung over the lower lip.

Its body is massive with heavy bones, a wide chest, and a straight back. All that mass is moved with four equally strong legs. At the end of the back there is a thickly-furred long tail in the shape of a crescent. This dog’s whole body is muscled.

We cannot emphasize how big this dog is. Fully grown males reach from 32 to 35 inches in height. Females are a bit smaller and reach from 28 to 32 inches. This is only up to their shoulders!

Such massiveness must be accompanied by proper weight. This giant dog can weigh from 143 to 198 pounds for a male. Females can weigh from 110 to 154 pounds. Some males can reach even beyond an impressive 220 pounds. This is no wonder considering their height.

There are three standard colors of Sarabi Dog.

Those are fawn, sable, and black.

It is not unusual to spot a rich brown Sarabi Dog with black mask or in full black color. There are even individuals that come in shades of gray. Some specimens may have a bit of white on the chest.

Theiroat hair length can be short or medium.

Generally speaking, the Sarabi dog breed enjoys good health. However, there are some common issues that can occur. It is good to be aware of them.

When we compare large dogs with small ones it is common that large breeds have a shorter life expectancy.

Given the fact that small dogs can live from 13 up to 18 years, while average lifespan of big dogs is between 8 and 12 years, the Sarabi is somewhat an exception.

Most mastiff breeds cannot outlive 8 years, but it seems that in the Sarabi, the molosser genes prevailed. His life expectancy is somewhere between 12 and 15 years.

This dog has a high reproductive rate. The size of a litter is from 6 to 8 puppies. As the breed is generally healthy, so is the offspring. This information is very important to breeders who emphasize the importance of the quality of the process.

There are four common health issues that a Sarabi dog owner might face.

• First is bloating or gastric dilatation-volvulus (GDV) which happens because air in the stomach gets trapped and the stomach literally twists. It is a dangerous condition which requires a medical procedure, otherwise it can cause death.

• Second is hip dysplasia caused when the hip bone pops out of its socket. It causes great pain for a dog in its lower back. You will notice that something is wrong because your dog will run and jump reluctantly and eventually start to limp around. This condition is treatable. Your dog will be given anti-inflammatory medicine and guidelines on how to treat him until this condition is over. Sometimes it can happen that these dogs develop joint disorder issues. These issues are caused if the dog is climbing stairs a lot.

•Third common health problem is obesity. Such a huge dog demands a high food intake. This means that they need equally as much exercise to keep the balance and sustain optimal weight. If this balance is disturbed in favor of food, it is possible that a dog would become obese. Obesity is not a problem itself, but it can lead to further issues. It increases risk of heart problems, diabetes, and cancers.

• Fourth health issue is progressive retinal atrophy or PRA. It is incurable and it causes blindness. What happens is that photoreceptors in the eye degenerate until thedog can no longer see. 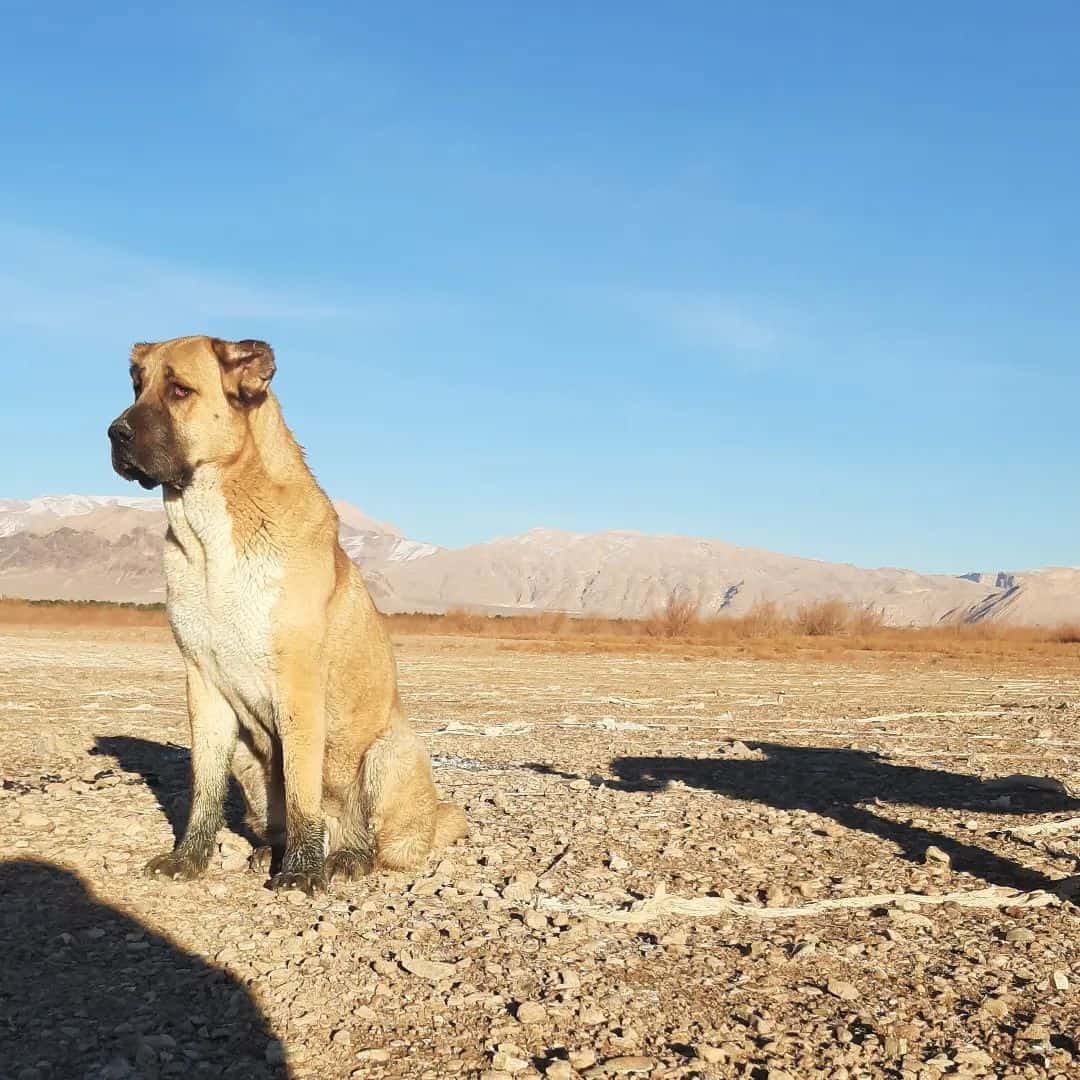 Mastiffs and, therefore, Sarabis are highly intelligent dogs with reinforced intuition. They are powerful dogs and the combination of being smart and strong enables this animal to be courageous and independent.

At the same time, they are loyal dogs; very protective towards their family members. All in all, dogs of this breed are generally of good natured, eager to please their owners and not afraid to put up a dog fight or clash with any kind of threat to protect their property or master.

Being a livestock guardian dog, the Sarabi is a breed that is used to fighting with predators of all shapes and sizes – from jackals to bears. They do not fear anyone. That is the reason why this breed is probably not a very wise choice for a first-time dog owner.

These dogs have a high activity level and they are highly energized dogs. It is not recommended to keep them in small areas like apartments.

If they do not have enough exercise they will become frustrated and bored which can lead to aggressive behavior.

They make good family pets if their needs for space and physical activity are fulfilled.

It is probably not very wise to keep them unattended around small children. It is not that a dog is going to attack a kid but play can sometimes go in an unwanted direction and the dog could feel threatened.

Like other big dogs, the Sarabi has a strong prey drive and can perceive small dogs or other small animals as prey.

A protective dog like the Sarabi can seem intimidating to other people. Sometimes he is very attentive toward strangers and may manifest aggressive behavior, aloud bark, and growling.

Proper training will do the task of socialization and prevention of these unpleasant behaviors. The earlier the better.

A gentle but firm approach to training is a winning combination for the successful training of a Sarabi Dog.

A trainer must be patient, consistent, with a lot of positive corroboration in the process of conditioning but show that he is the boss. It is good if the dog learns these behaviors:

The process of feeding is a good time to teach your dog these commands. You can do it by giving it a treat each time it follows an order. It is a very useful command in situations where you need to calm your dog or prevent his reaction.

• Adapting to leash and learning to heel

Since their prey drive is highly expressed, you should teach your dog to listen to the heel command and sidewalk. Some dogs are not really happy when put under leash but eventually they get used to it. This is important because of other people who can get scared of such a big dog. Take care that you always have a treat or snack with you.

Imagine a 200 pound animal jumping on you. It sounds pretty scary even though it is an expression of love from your dog. You will be happy if you can stay on your feet after such a greeting. So, it is probably best to teach your Sarabi Dog to greet people with a paw or sitting so the other person can pet him on the head.

It is assumed that Sarabi’s bite force is somewhere between 500 and 700 psi (pounds per square inch). The Cane Corso or Italian Mastiff can bite at around 700 psi, and the English Mastiff at about 500 psi. The Turkish Mastiff has the strongest biting power of 743 psi. There is no precise evidence for the Sarabi but everything points to the conclusion that it is equally as strong.

The Sarabi Dog is surely one of the most incredible sights in the dog world.

This bold fighter is going to protect you from all the possible dangers, but you need to be up to the task. This dog needs a firm hand and a strong owner.

It needs a lot of space and attention, so you should take that into account before you decide to bring a Sarabi home.