Pitbulls are that one dog breed that often gets mistreated because of their bad reputation that has been glued on for decades now. These dogs do have a slightly aggressive appearance, but the truth buried deep inside is so much different.

Pitbulls are huge cuddle creatures who love to show love more than any other popular breed. Thanks to one Pitbull’s bravery, protectiveness, and love, two lives were saved from a burning home.

Meet Sasha, the eight-month-old Pittie who’s only a month older than her baby human sister. They do everything together, but their nap sessions when they cuddle together are the cutest. 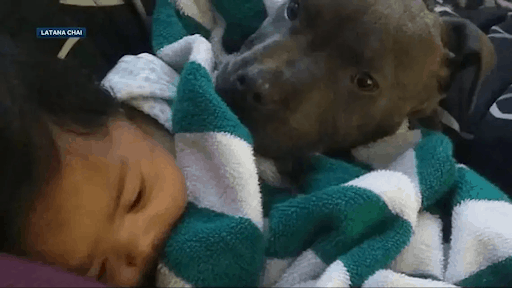 But, one night could’ve ended up tragically for the little family. Sasha sensed something wasn’t quite right. She woke the mother, Chai Lantana, by banging on the backyard door and crying.

At first, Chai didn’t realize where the problem was, but then she saw her cousin’s home next door all in flames and everything became clear. They were in danger. Chai rushed to her daughter’s nursery only to find out she was not there.

But, where could the seven-month-old go?

Sasha listened to her natural instincts and rescued the baby by dragging her out of the bed by her diaper. Thanks to this courageous Pitbull, Chai was able to run out of her house, save the baby and itself, and call 911. 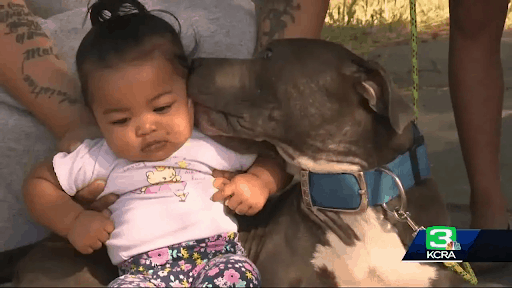 Unfortunately, when the firefighters came, there wasn’t much to be saved. Chai’s home was burnt to the ground.

However, if it wasn’t for Sasha, who knows what would’ve happened with Chai’s family! Sasha went from a family dog to a family hero, and we, too, thank her for being such a good girl. 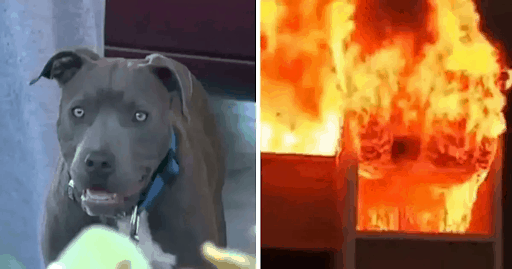 This wasn’t the first time that an animal helped out humans and saved them from a disaster. A story comes from Ethiopia, when a group of men kidnapped a little girl. When they tried to move her to a second hideout, a pride of lions chased the men off. They stayed with the girl until the police came.

Only when they were sure the girl would be safe, the lions went away.

Another story comes from the far coast of New Zealand. A family was swimming in the ocean, enjoying their time in the water, when a group of dolphins surrounded them. At first, they were surprised and excited to be near these wonderful animals.

But then, the family realized the dolphins made a tight circle around them to protect them from a Great White shark.

Finally, there was an incident in the forest when a little boy witnessed his parents drowning. The night came with low temperatures, but the boy was still alone and lost in the woods. At night, he felt something warm pressing against his body.

In the morning, he found out that three wild beavers kept him warm all night.

Whether they’re domestic or wild animals, they sure make the finest heroes among them all!