Everyone is familiar with the elegance of the Irish Setter and Poodle dog breeds, but did you know they are proud parents of an Irish Doodle and Mini Irish Doodle?

When the world fell in love with the Irish Doodle, made up of the Irish Setter and Standard Poodle, the popularity of small dogs exploded, and its smaller version, the Mini Irish Doodle is born of the Irish setter and Mini Poodle.

This small, hairy beauty, like every hybrid dog, is more expensive than its parents, with some differences and similarities with both of them.

This article will introduce you to the Mini Irish Doodle, its ancestors, characteristics, behavior, price, and everything else you should know about the breed.

What is a Mini Irish Doodle? 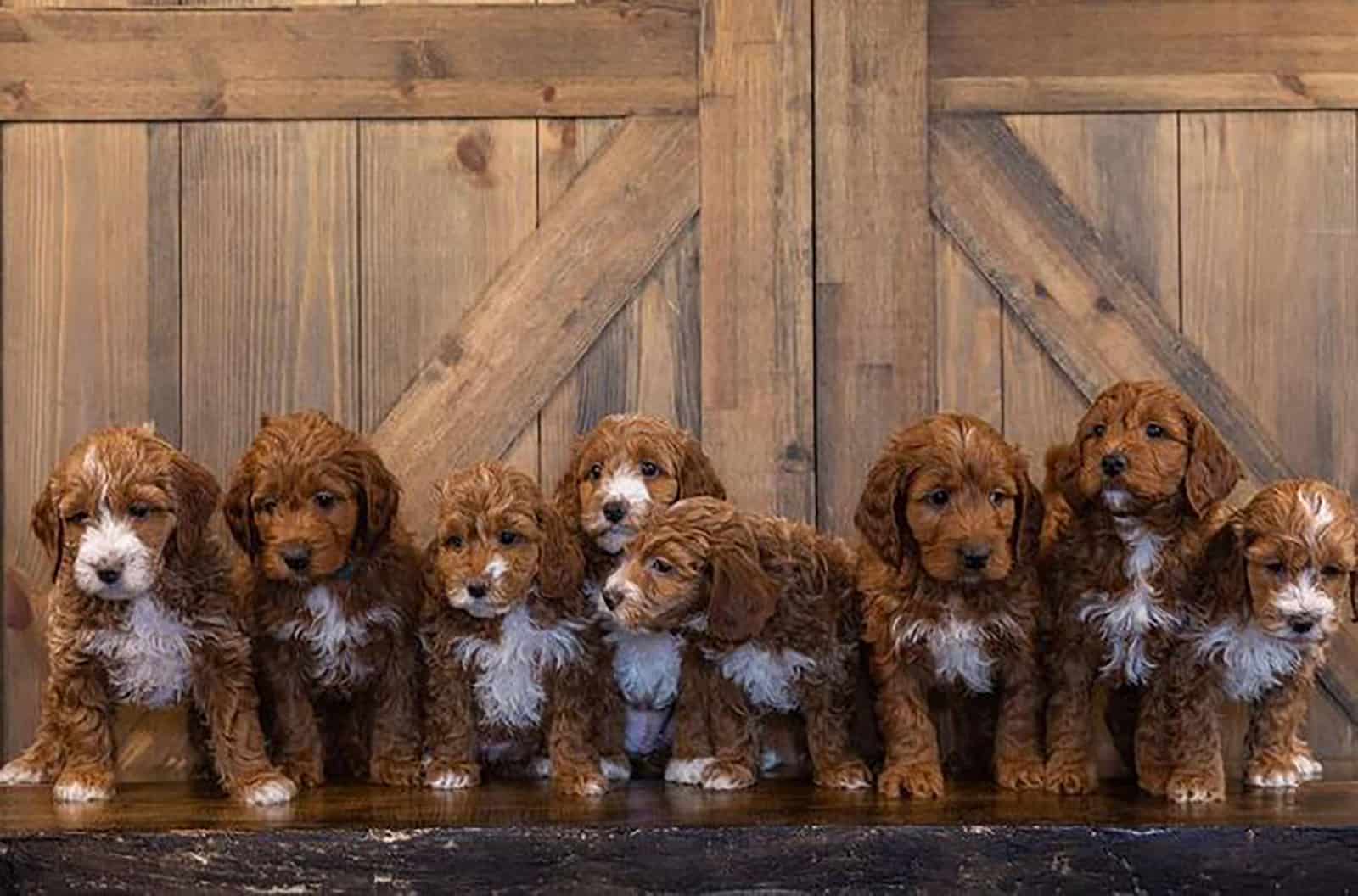 Made in the 1980s, the Mini Irish Doodle was made to suit allergic people and to serve as a therapy and assistance dog with its loving, sensitive, and patient nature.

Mini Irish Doodles have all the characteristics of an Irish Doodle (colors, behavior, temperament), only in a smaller size.

As with both parents, a Mini Irish Doodle is very athletic, devoted to family and has the same intelligence, vigor, and warmth that will melt your heart. 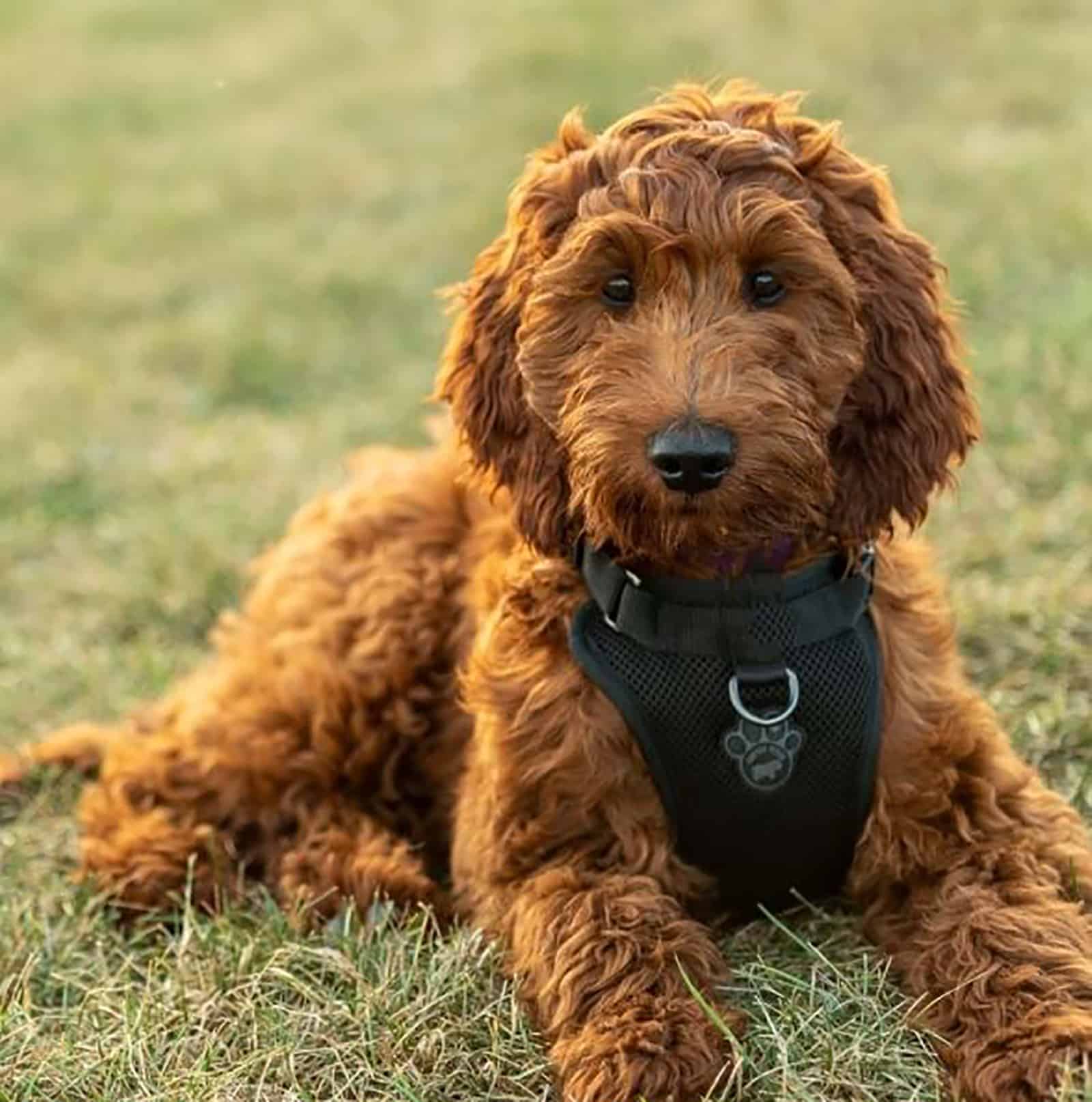 A Mini Irish Doodle can be proud of its parents – an Irish Setter and Miniature Poodle. The first is one of the prettiest and funniest, while the second is one of the smartest world breeds.

So, let’s remind ourselves about their greatness.

The beautiful mahogany and shiny Irish Setter is a hunting dog, very loving, loyal, and outgoing, so we can see why the Mini Irish Doodle is so active and good with kids, but stubborn too.

Poodles are usually widely known for their high intelligence, and that’s the trait they pass to their mini versions.

Miniature poodles usually have a litter of five pups a year, which makes their prices higher. 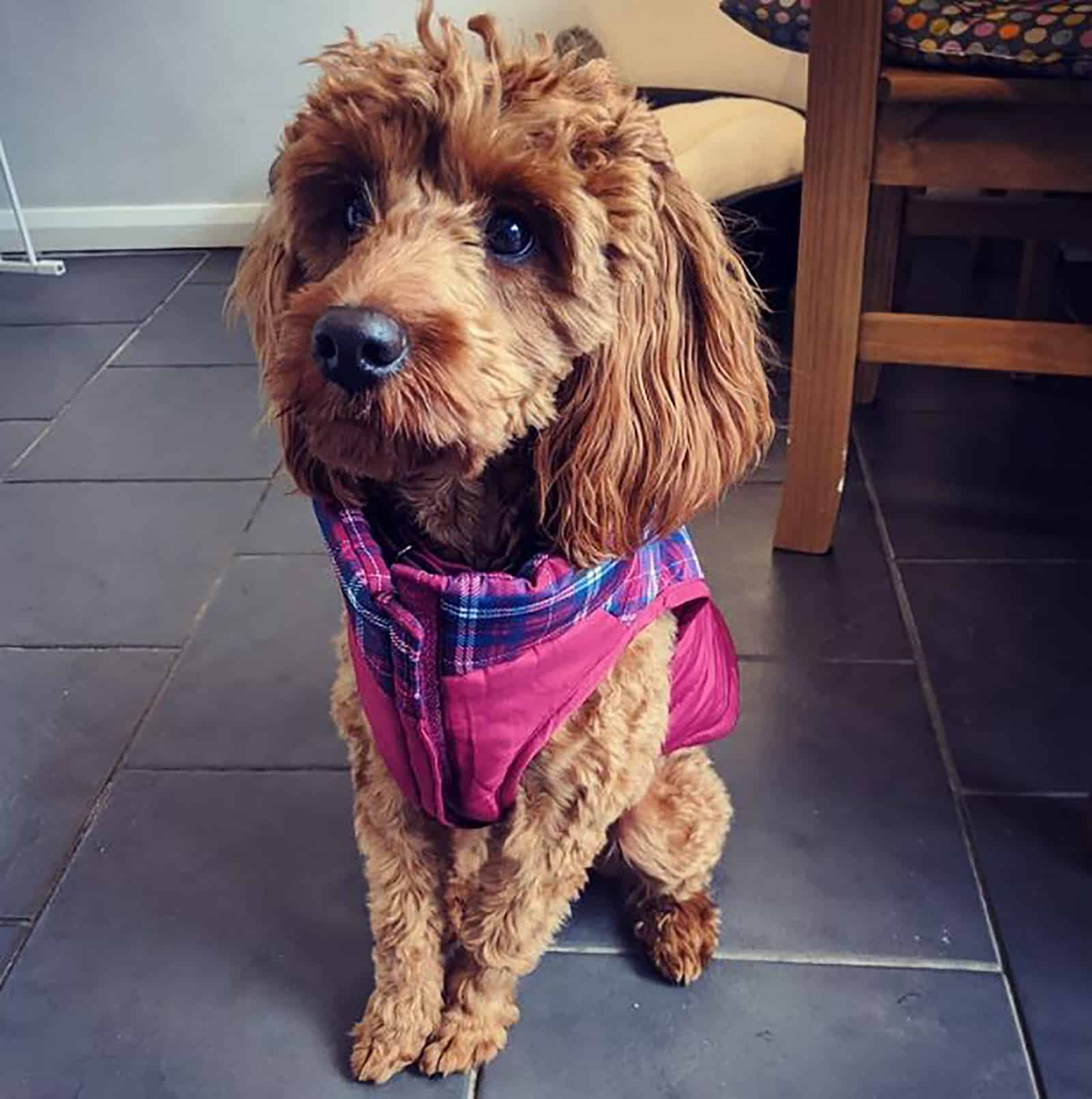 The Irish Doodle hybrid probably came from the U.S, like most hybrids.

There are a lot of similarities between the Standard Irish Doodle and the Mini Irish Doodle, so in this section we will mention some of the Irish Doodle’s traits, just to compare the differences.

These are affectionate, outgoing, sensitive, and active pups, making them perfect family dogs.

The American Kennel Club (AKC) hasn’t confirmed the Irish Doodle as a purebred dog, but the American Canine Hybrid Club (ACHC) and a Designer Breed Registry (DBR) acknowledged it as a hybrid and designer breed.

Regarding their health, Irish Doodles are prone to bloat, Hip Dysplasia, and Addison’s Disease. 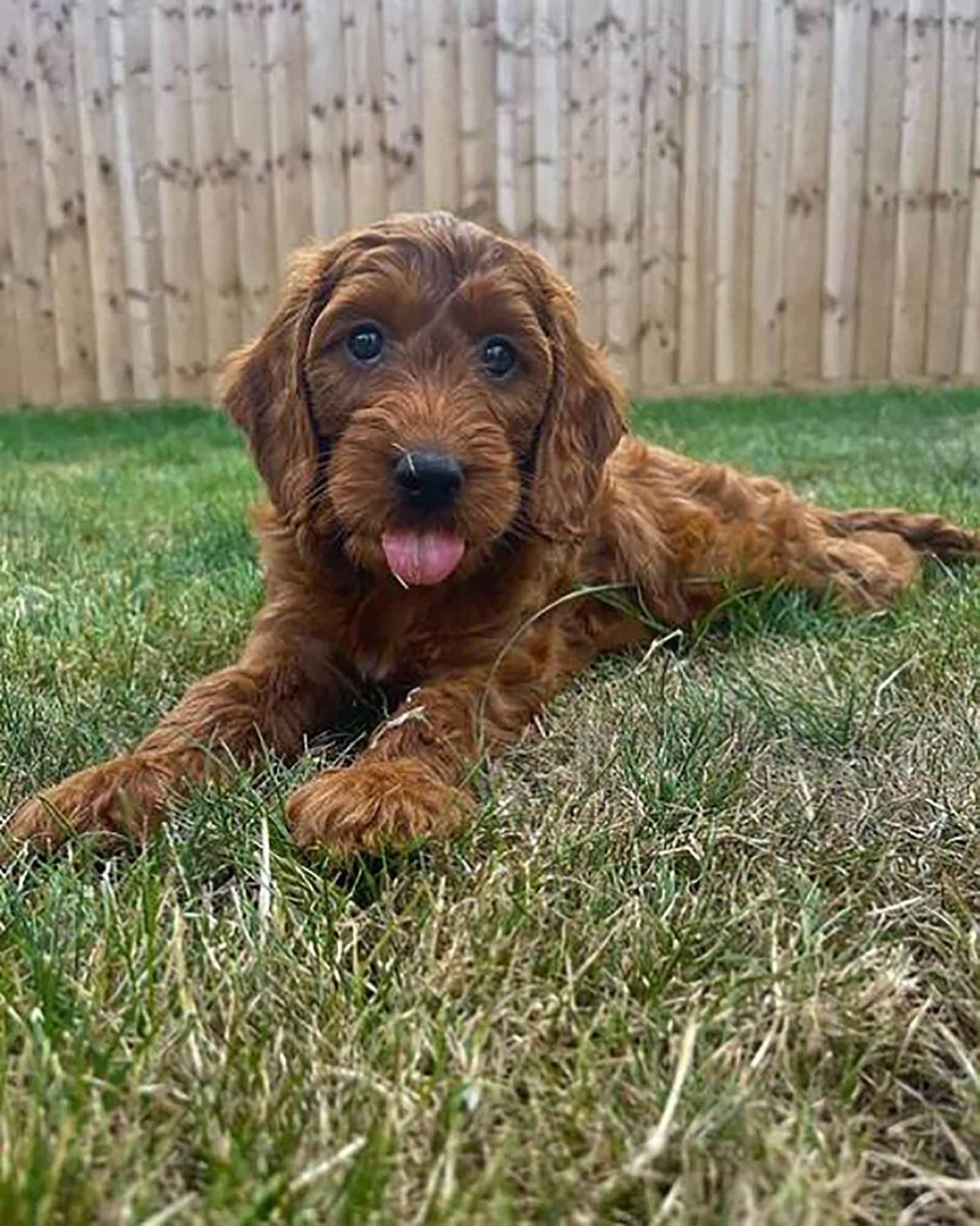 Depending on what features they’d like Irish Doodles to have, the breeders play with genetics.

• F1: The most popular generation when making the Irish Doodles is the first one – F1, being genetically healthiest, where you can find 50% purebred Standard Poodles and 50% Irish Setter.

• F1b Irish Doodle: A dog with 75% Standard Poodle and 25% Irish Setter’s genes is even more hypoallergenic. They are taller, with a wavier or curlier coat.

• F1bb: This version of Irish Doodle is made of 12.5% Irish Setter and 87.5% Standard Poodle. It sheds the least, and looks more like a Poodle with a curly coat instead of the wavy or straight Irish Doodle’s fur.

Now we are familiar with the part of their family tree, it is time to meet a Mini Irish Doodle.

Mini Irish Doodle: Everything You Should Know 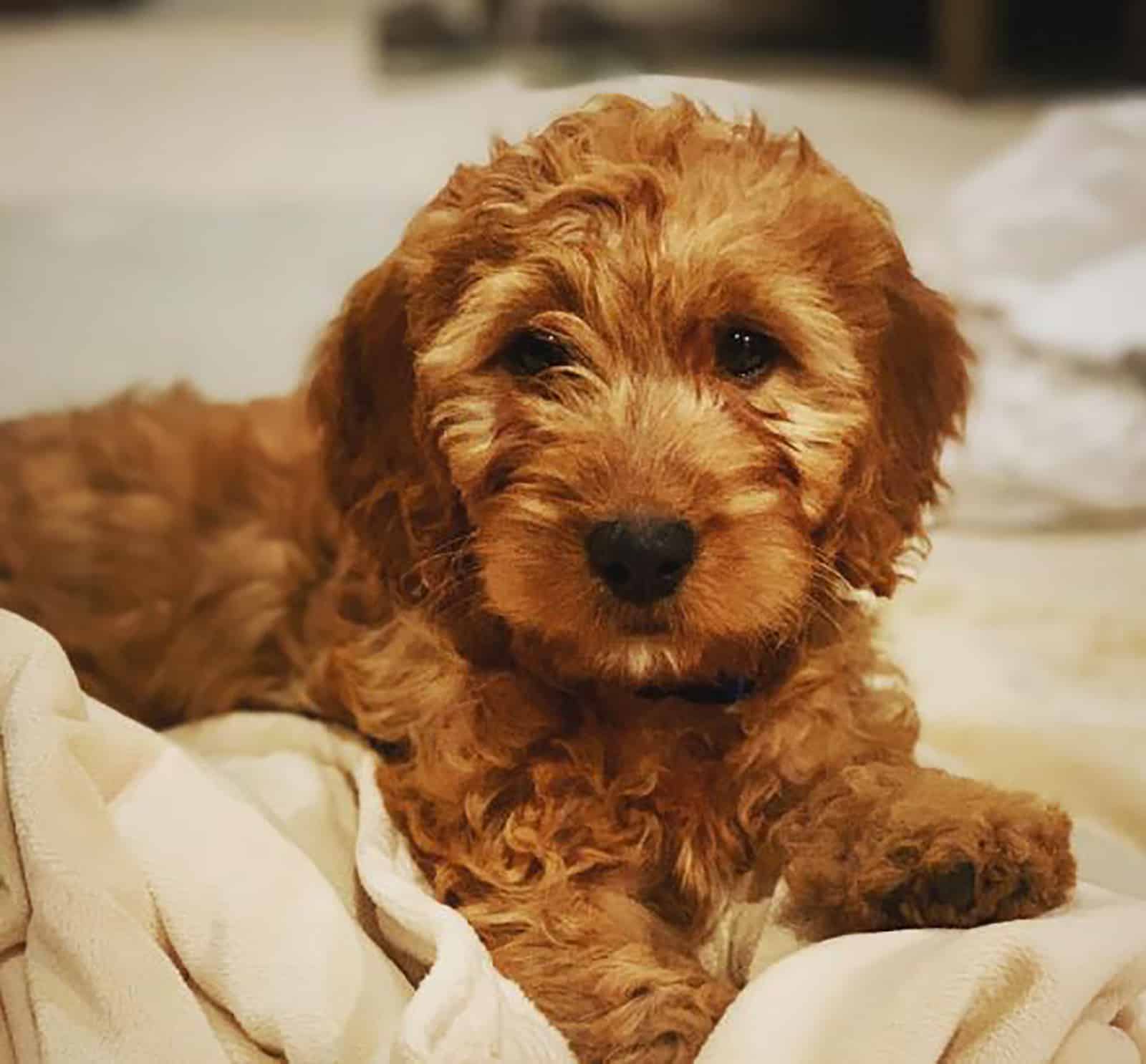 After seeing its amazing parents and cousin, now we know that the Mini Irish Doodle has to be special.

• Price: The average price for a Mini Irish Doodle puppy is $2000 to $5000, but it can be lower or higher, depending on the breeder and the characteristics of the dog. 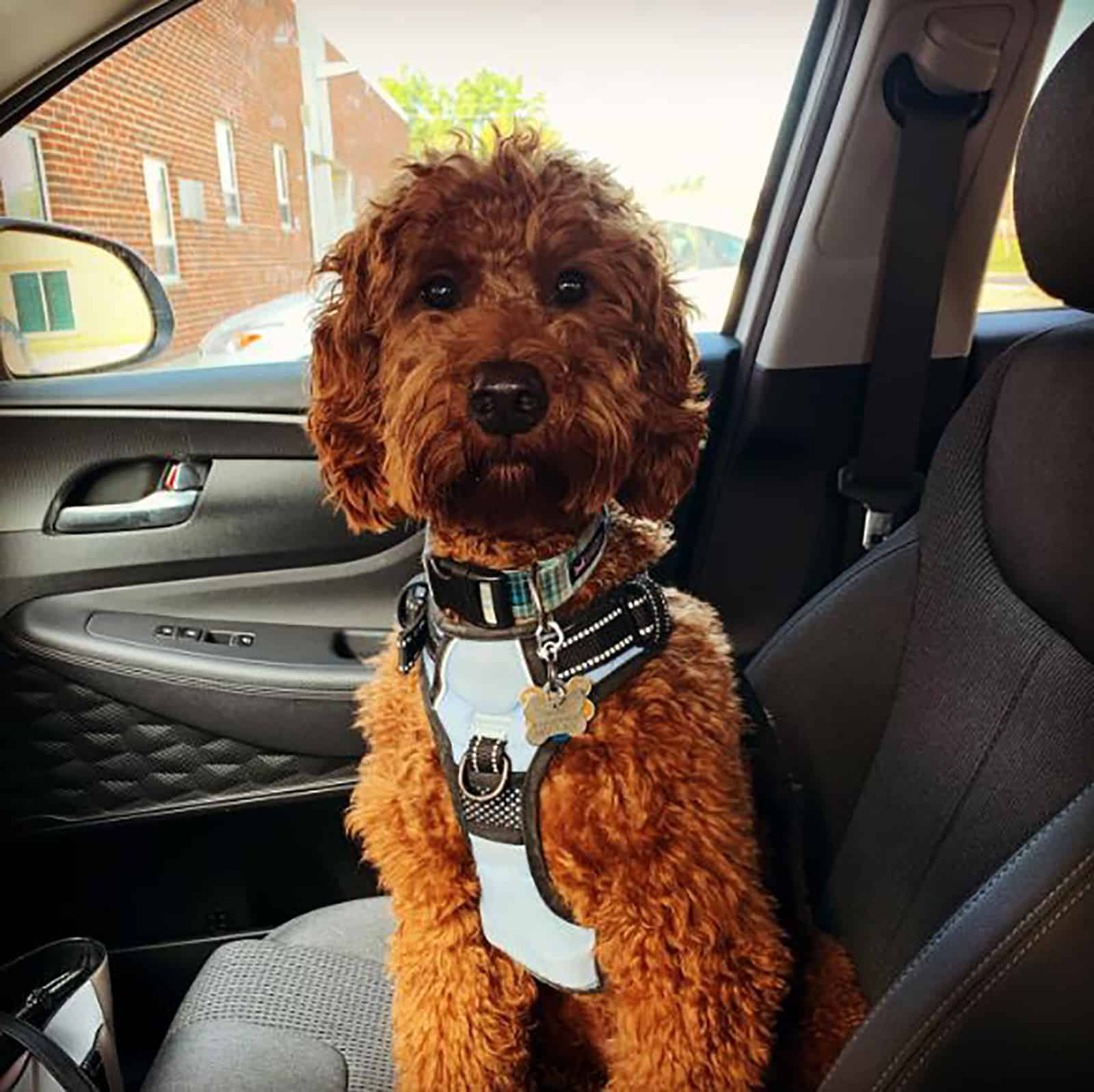 Its small body, narrow head, and cute face which can have the muzzle of either of the parents are attracting attention wherever it goes.

A Mini Iris Doodle’s eyes are dark brown and oval, the nose is brown, and the ears flap by the face when not cropped.

The coat of the Mini Irish Doodle is long and wavy, and you should visit the groomer to keep them cute and healthy.

Minnies are made by dog breeders so they do not shed a lot. If they shed more than average, they’ve inherited that treat from an Irish Setter parent, who sheds moderately, a little more than a Poodle, which is considered a hypoallergenic breed.

If they have a higher percentage from their Poodle parents than the Irish Setter genes, then the Mini Irish Doodles have curlier coats and shed less.

Mini Irish Doodles can inherit color from any of the parents, so they can be red, or apricot and black (which are rare and more expensive), or can have fur with some white markings.

Your Mini Irish Doodle needs bathing only a few times a year unless they get covered with mud or some other heavy dirt.

But, they will need regular grooming – brushing and hair cutting.

Its ears need to be cleaned regularly, or they can get various infections.

Any dog can influence a person with allergies, but some dogs, such as the Mini Irish Doodle, are less irritating.

Dog’s dander and saliva are the biggest irritants for allergic people, but there’s no reason to have dander if you take care of its fur.

Mini is known for its non-shedding quality.

Very loving, affectionate, and obedient, a Mini will be a perfect member of your family, with a mutual love for you and your kids and great with other pets.

They like company, so they get bored if left alone, which can make them cranky.

How To Train Mini Irish Doodles? 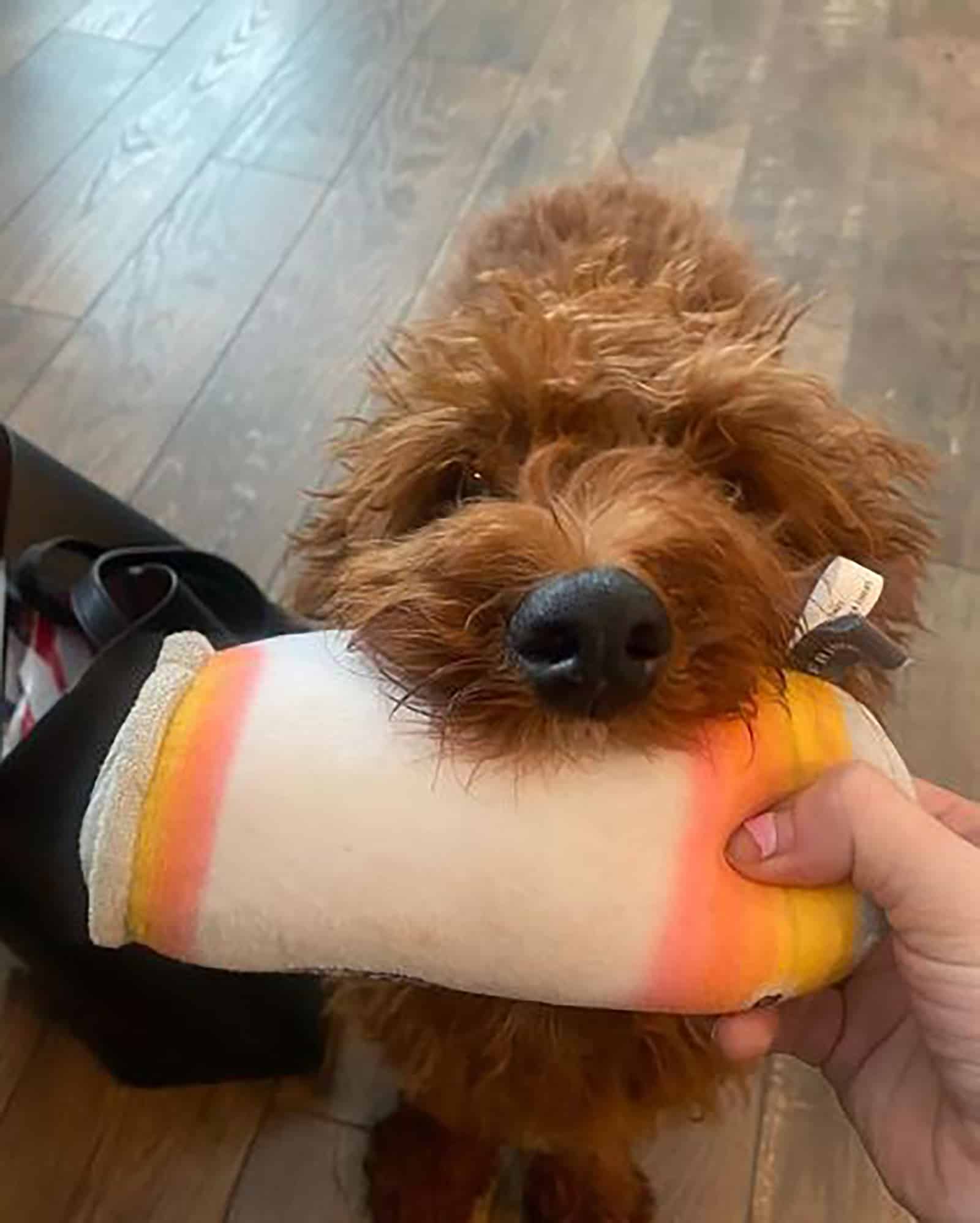 Even if you were never a dog owner, know that you can handle Mini Irish Doodles.

The Mini Irish Doodle is a very curious dog that likes to learn and needs a lot of mental stimulation. They are intelligent, so they will learn commands easily.

But, be aware that their curiosity will lead them to explore everything, which is not the best thing when you are not around.

With their hunting background, they sometimes behave stubbornly and follow their nose while disobeying commands.

If you have a Mini Irish Doodle, prepare yourself as it needs a huge amount of physical activity to satisfy its huge energy levels.

It is a really active dog, as its parent breeds, so it would be best if you have a private yard for its needs.

They can run, walk, or swim, for at least an hour and a half daily. 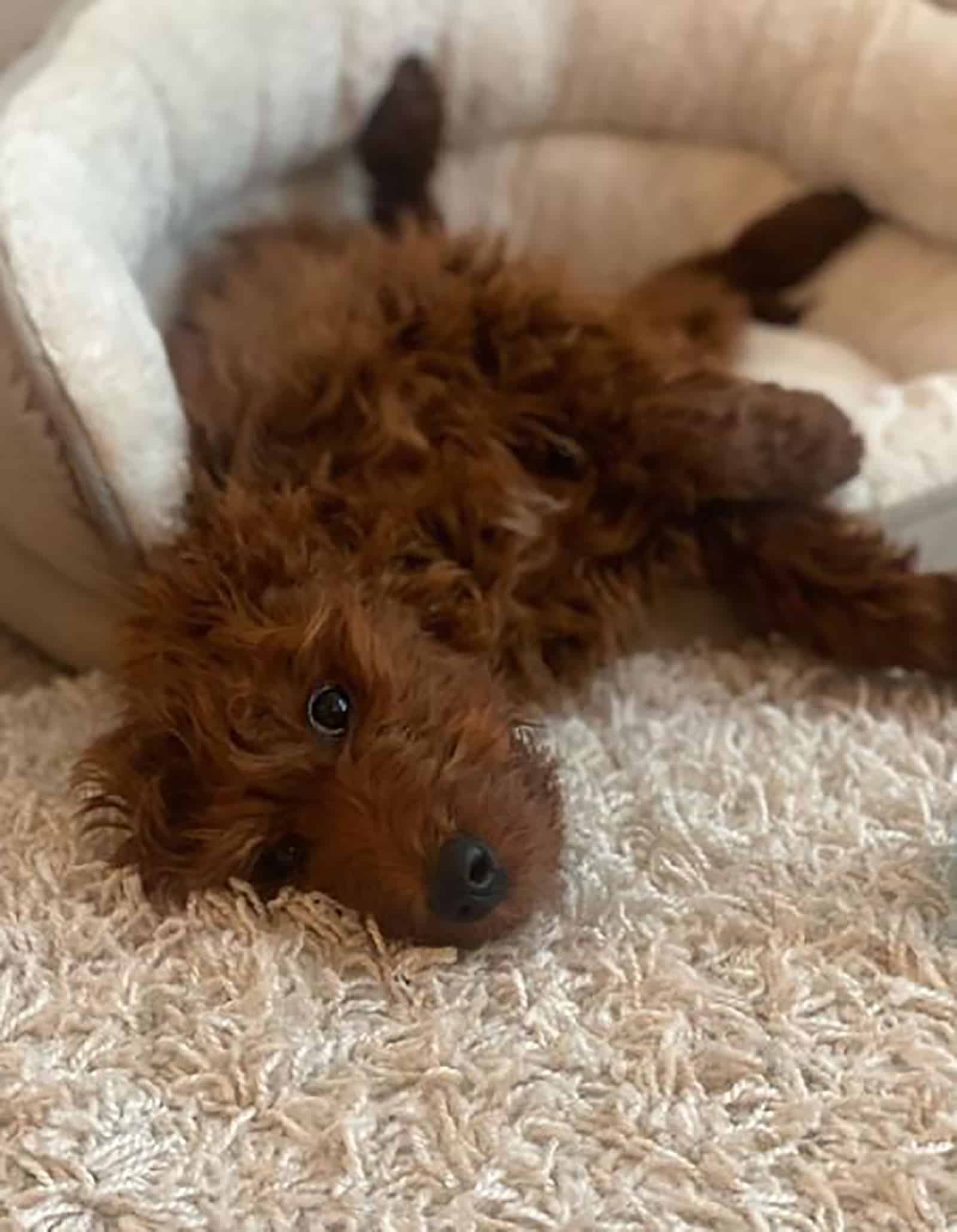 The Mini Irish Doodle is considered a healthy crossbreed, but be sure to buy them from a proper breeder, because there is not a lot of data about this specific designer dog.

Since its ancestors are prone to some health conditions, pay attention to your puppy’s family tree and all other documents you get from the kennel to be sure you’ve got the best dog.

Consult with your veterinarian or a dog nutritionist about the amount of food needed, and if you have any health concerns.

Let’s Wrap It Up

New dog breeds are often unpredictable, but when your dog has breeds like Poodle and Irish Setter in its blood, you fear less that something can go wrong.

Intelligent, family-loving, obedient, and sensitive are its attributes, and the Mini Irish Doodle carries them proudly, like its ancestors.

The 10 Best Irish Setter Breeders In The U.S.