The general rise of the population living in the cities and city centers, has meant that small dogs have become very popular. Due to their miniature dog size, little dogs are perfect companions for apartment living.

One of the most famous dog breeds out there, the Mini French Bulldog is a small dog who has a special place in our hearts. Known for being a great companion dog, they can perfectly fit in both, fast-paced and slow-paced lifestyles.

But why do we suggest that the Mini French Bulldog could be your mini best friend? Let’s dig into this topic a bit deeper.

What Is A Mini French Bulldog? 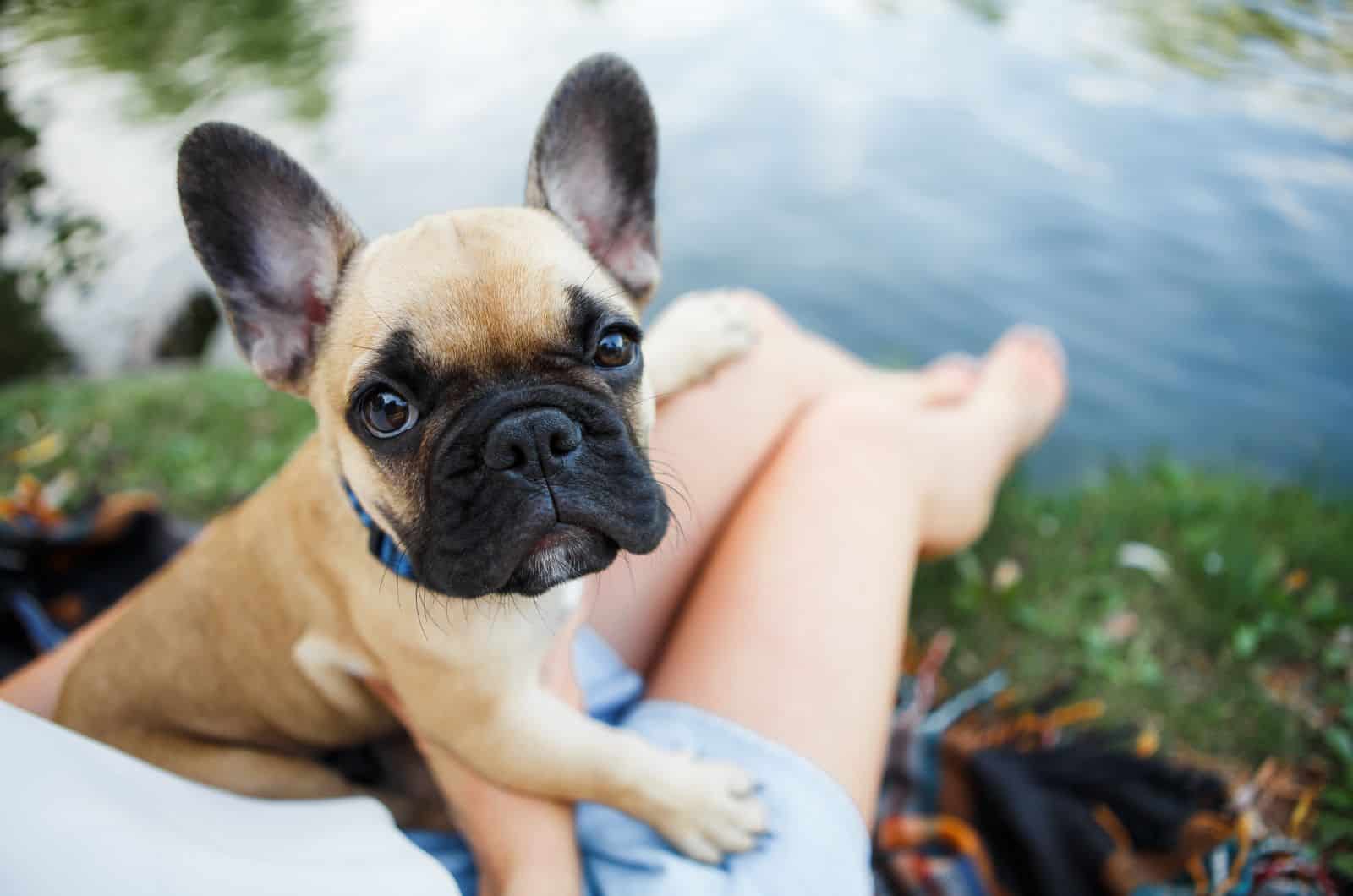 A Mini French Bulldog is simply the regular French Bulldog in a miniature size. Smaller canines were purposely bred in order to create a tinier version of a Frenchie, which is now a dog breed on its own.

In other words, this is not a mixed breed, but in fact a subspecies of the regular Frenchie. However, your Mini French Bulldog puppy is an experience of its own because as puppies, they are as small as Chihuahuas!

What Is The Origin Of This Dog Breed? 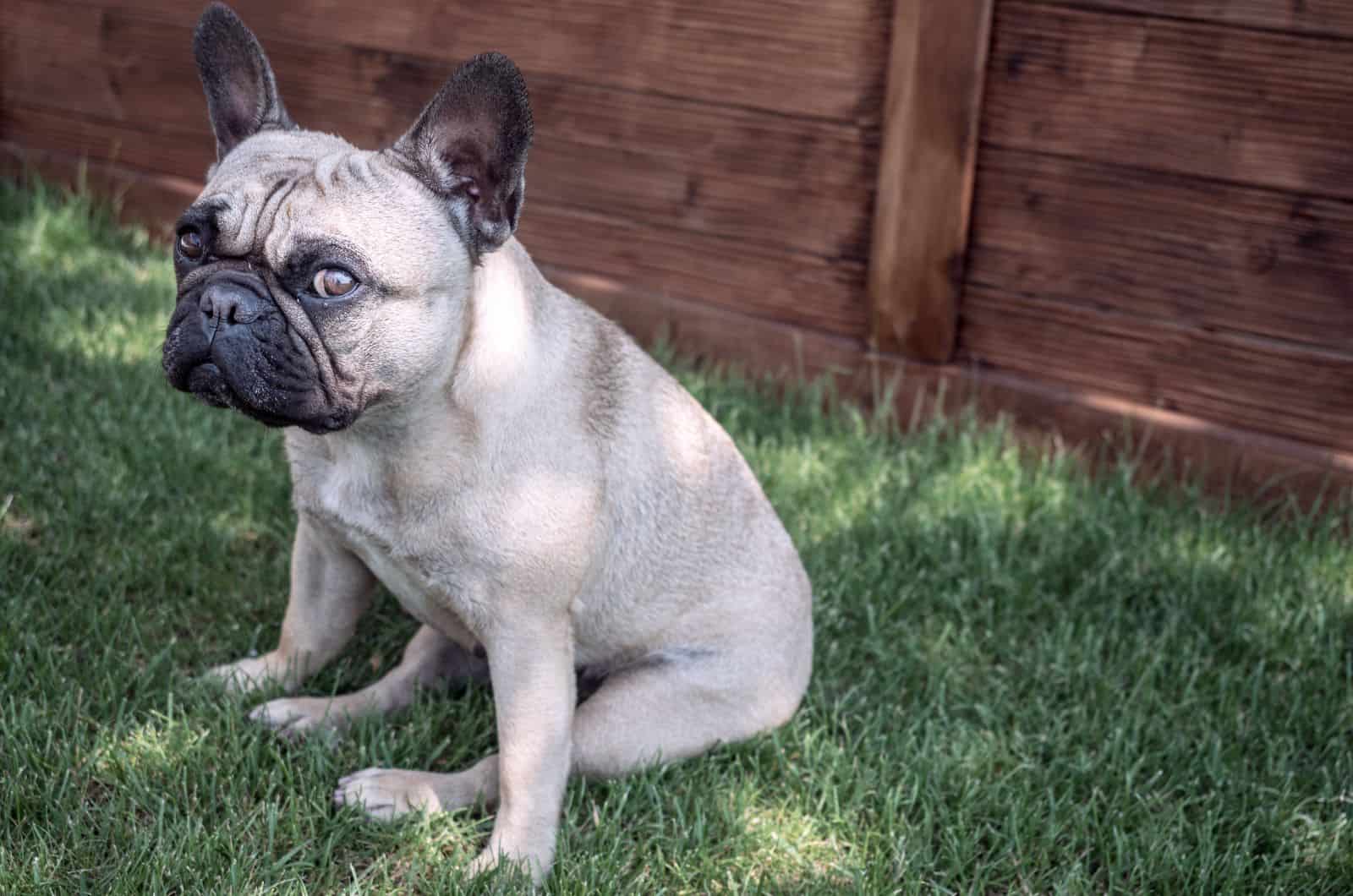 The standard French bulldog actually originated from England! Their ancestors are the famous English bulldogs, who were bred for bull biting. Later on, as the Industrial Revolution started happening, an interesting phenomenon occurred.

As the lace workers from Nottingham were forced to settle in France, more specifically Normandy, many of them brought these dogs as companions. The dogs became very popular lap dogs, as they were considered a toy dog.

All of those smaller bulldog puppies, known as runts, who were considered ‘faulty’ because of the bat ears or being the smallest in the litter, were sent to France. And just like that, the French Bulldog became a thing.

And How Did The Mini Frenchie Took The Spotlight?

We can conclude that this selective breeding resulted in the miniature Frenchie becoming a popular breed among us. It is definitely easier to maintain a smaller dog, and that’s why the breeders made an even smaller version of the already small French bulldog. 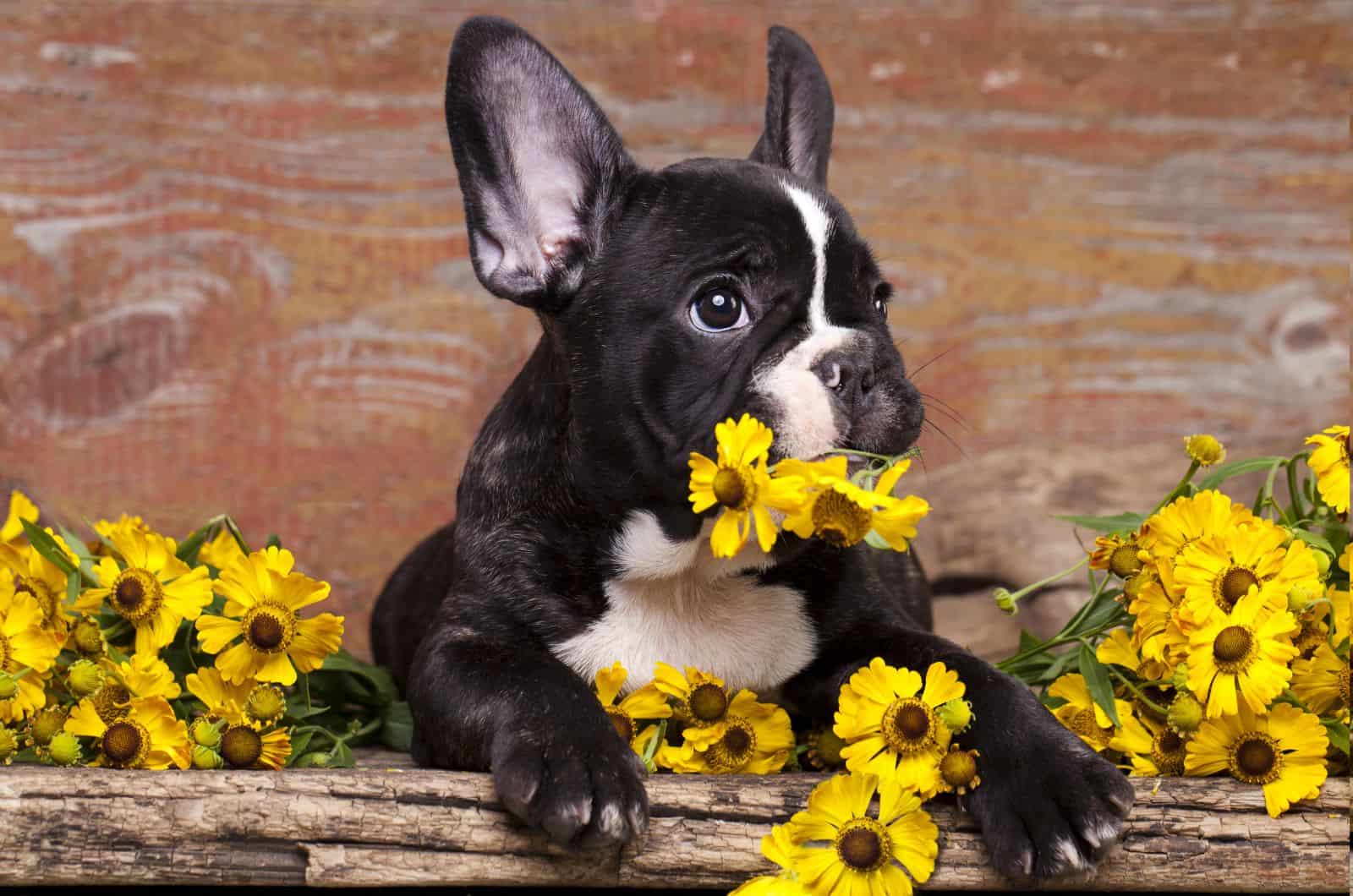 The Frenchie has a silky coat, wrinkled face, and pushed-in snout. It is a small, yet powerful dog. It has huge, upright “bat” ears.

They look exactly like their parent dog breed, the French Bulldog. Yet, they are smaller when it comes to dimensions of the body.

A Miniature French Bulldog is about 11.5 inches long and weighs between 5 and 12 pounds.

A typical French Bulldog measures 11 to 13 inches at the shoulder and shouldn’t be heavier than 28 pounds. Typically, the Mini French Bulldog will be smaller than this, however, their sizes will differ depending on how breeders generate them..

What do we mean by generating them? It might seem strange, but many breeders actually mix them with other dog breeds.

These dogs come in the usual regular Frenchie colors: black, champagne, white, gray, brown, two-color and tri-color, but they also come in the famous merle coat.

That Merle color pattern is a characteristic genetic feature and carries many more things than the mere interesting looks.

The Merle gene can affect a dog’s health in various ways, such as having problems with deafness and vision, but only if two merles are bred together.

The most popular merle Frenchie color is lilac and brindle. Lilac and brindle are extremely beautiful in the french bulldog breed, and highly sought after due to their uniqueness. As a result, the most expensive Frenchies are usually one of these colors: merle, brindle, or lilac.

Many dog owners are unaware that they have a Mini Frenchie crossbreed, because many breeders actually breed the runt dog with another toy breed.

It is most common, when talking about crossbreeding, that mini Frenchies are bred with Poodles, Pugs, Terriers (more precisely, a Yorkshire terrier), and Chihuahuas.

The most common dogs that Mini Frenchies are bred with are Chihuahuas, because it minimizes the health concerns of a reputable breeder. It does not change the look of the dog significantly, but those frenchie puppies tend to be smaller.

Presently, a little variation of another crossbreed, known as a miniature bulldog, is sometimes referred to as a toy bulldog. They are a hybrid created by mating french bulldogs with pugs and chihuahuas, or the resulting progeny, rather than a recognized breed.

Some breeders actually differentiate between Micro Mini, Teacup Frenchies and Mini Frenchies, but nonetheless, they are all pretty much the same.

So, if you have found dog breeders on the internet that sell both the Micro Mini and the Teacup Frenchie, if you bought both of them, you probably wouldn’t see any differences when they become an adult dog.

What Are The Breeds AKC Standards?

The AKC is the biggest dog registry of the purebred dog breeds in the United States of America, and the only official one whose standards are seen as authoritative.

This dog breed, The Mini French Bulldog, doesn’t have AKC Standards because it is not approved by the American Kennel Club as an official dog breed.

They say that no reputable breeder would dare to breed Mini Frenchies due to the many illnesses and health complications that this breed suffers.

However, since this dog breed, the teacup frenchie is becoming more popular by day, many dog experts believe that this dog breed will, in the near future, be recognised by the American Kennel Club.

How Do The Mini Frenchies Behave? 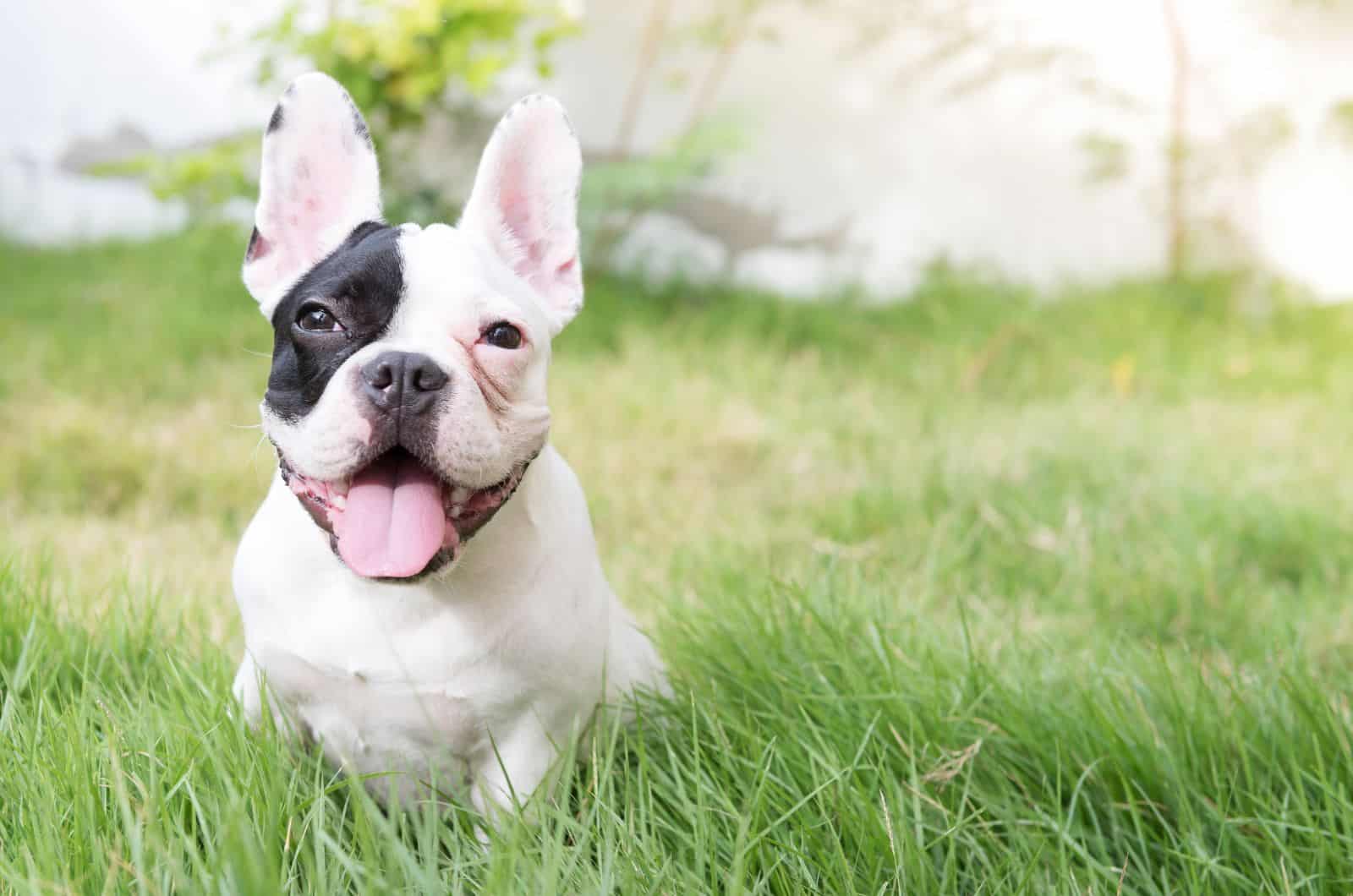 This dog breed will always be the center of attention. Not because they are the divas of the dog kingdom, but because they will do anything for your attention!

They are playful, sassy, and friendly. You can always expect that they will make you smile, even if you are having one of the worse days ever.

They are very emphatic and they can sense your emotions easily. If you are feeling down, there’s no chance that they won’t sense it and cuddle you or make you smile somehow. Their caring yet clumsy and playful nature won’t leave you indifferent.

They tend to be very attached to their owner and can easily develop separation anxiety. When in this psychological state, it is common that dogs just don’t feel at peace when they are not around you, which can lead to them finding comfort in other ways.

By finding comfort in other ways we mean that they can whine and yelp, and usually they will have a toy that they carry around when they are alone, for emotional comfort and support. Rarely, they can become destructive, and maybe nibble on a chair leg or two.

Are They A Good Family Dog?

The answer is short: Mini French Bulldogs are great family dogs. They are a great fit for both active lifestyles and couch potato type of families.

Your Mini Frenchie will equally enjoy binge watching your favorite TV shows, as it will a fun outdoor activity such as running or playing catch.

They are great with kids, and will probably enjoy getting in trouble together with your kids, for example, by getting dirty in the mud or jumping around rain puddles. But not just that, they are great lap dogs and will always demand cuddles with both kids and adults.

It is highly important that the socialization of this dog breed starts early. Due to their sassy nature, they can, if not socialized, challenge another adult dog even if it’s triple their size. Their brave heart knows no height or size.

Also, due to their small size, it is important to let your kids know that they need to be careful and gentle with them, because they can hurt them unintentionally. 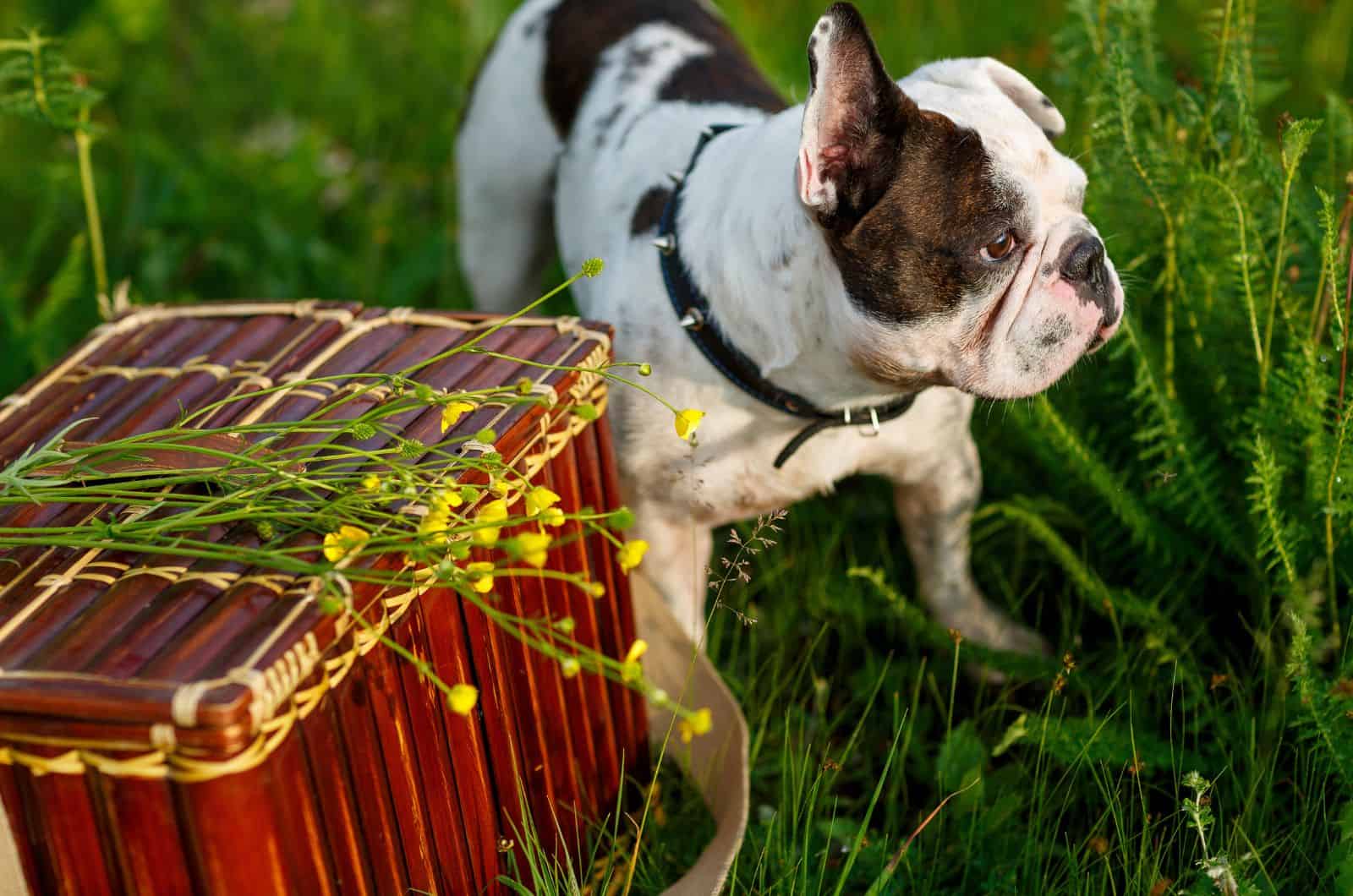 Sadly, the Mini Frenchie comes with a variety of health issues. The health problems that occur the most are:

The brachycephalic airway syndrome is a health problem that every short muzzled dog has. Essentially, it is a problem with breathing. The airways of short muzzled dogs can easily become infected, inflamed and swollen which can then lead to breathing problems.

Because of this, it is very important to choose a reputable breeder so you feel safe that you are buying a healthy pup.

Hip Dysplasia is a common health problem in every dog breed. To minimize the risks of your companion dog having movement problems, it is important that the dog is exercised regularly.

Dermatitis is something that you must pay attention to, and the easiest way to prevent it is by using hypoallergenic dog shampoos and products in general. Because of their short hair, their skin can come into contact with many bacterias, which can then give them sensitive skin.

If a Mini Frenchie is mated with a runt, some of the puppies may become affected by dwarfism. Even though it is not a major problem, it is something to think about.

Dwarfism has the potential to lead to deformed bones and bowing of the dog’s legs.

The lifespan of Mini Frenchies is from 11-14 years on average, because they are a small dog, they are known for having a longer lifespan than bigger dogs.

Is The Mini French Bulldog The Perfect Choice For You? 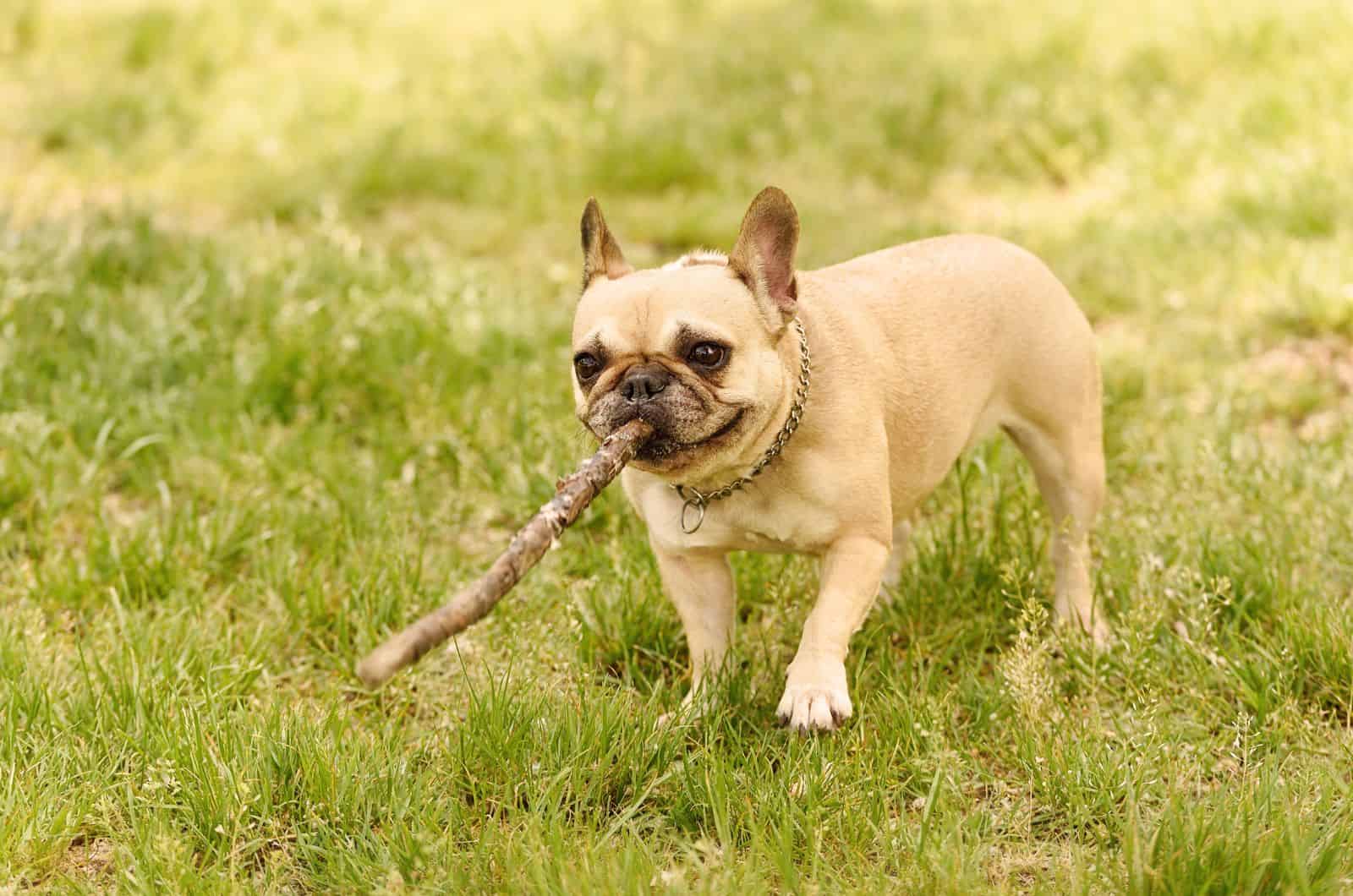 Mini French Bulldogs are one of the little dogs that are becoming more and more popular. Miniature dogs have a number of important benefits, including being less expensive and simpler to care for. The little French Bulldog is one of the simplest breeds to take care of.

It can seem like having a French Bulldog isn’t worth it when you consider the drawbacks and their susceptibility to a number of health problems. The benefits of owning such a devoted breed, however, outweigh the drawbacks with appropriate care and certain preventive precautions.

These dogs make a perfect, loving companion that will take a special place in your heart. Some say that owning them is like having a child because they are so needy of your affection and love, and will want to be the center of the attention all the time.

Thanks to their easy going nature and their compatible size, they are nothing but an exceptional dog for both families, and singles.

Their lifespan is fairly long, ranging from 11-14 years on average, which makes them a long-living dog. But, if you truly want your Mini Frenchie to live up this age while being healthy, regular vet checks are a must.

If you decide upon having a Mini French Bulldog, you will end up having the most loyal lap dog, that will never leave your side.

French Bulldog Growth Chart: How Big Can A Frenchie Get?

[…] The French Bulldog’s weight varies and not all these dogs weigh the same when they grow up. There is no way to predict exactly how much our Frenchie will grow.As we have seen, additional environmental factors can affect a dog’s growth and development. However, there is still something that can serve us as a sort of landmark.By observing the parents of the French Bulldog, we can get an idea how our Frenchie will look when he grows up. Genetics is one of the main determinants of a dog’s weight and height.See Also: Mini French Bulldog And Why Should You Get One […]

[…] See Also: Mini French Bulldog And Why Should You Get One […]