Labradoodles are one of the most popular breeds of family dogs. Their popularity comes from their beautiful and cuddly character and their smart and loving nature.

Besides these adorable and noble characteristics, there’s one thing that will definitely serve as a pro for getting a Merle Labradoodle – they are incredibly easy to train and take care of.

However, some find them a bit plain and look for varieties that have something unique about their appearance. Luckily, there’s a solution for everyone: the Merle Labradoodle.

It’s not a separate breed, and in fact, it doesn’t refer to the dog itself or its qualities but the fur and, in particular, its unique color. The common Labradoodle has become such a popular dog breed because of its quality from properly chosen lineage.

What is called the F1 Labradoodle is a mix of a purebred Labrador and a purebred poodle.

That’s what gives this dog its unique look and temperament. It’s smaller, easier to train, and what’s rather important to many, it’s hypoallergenic.

The dog is also cuddlier and has a nice coat of fur that requires some work and care but looks beautiful.

Merle refers to the color of a Labradoodle but not the shade itself but rather the pattern of colors, which is this breed’s trademark.

The patches of color result from the merle gene, which is also responsible for the dog’s dashing and noticeable blue eyes. Those eyes won’t leave you indifferent.

The genetics of this breeding process is one of the most complicated there is, and the breeding program needs to be selected with great care if you want to get a dog that both fits this description and is as healthy as it can be. The merle coat is created by the heterozygote of an incomplete dominant gene. That means that Labradoodle breeders need to be involved in the mating process.

If two Merle Labradoodles mate with one another, you may get a double merle.

This won’t only affect their coat but also their health as most of these dogs have significant health problems, some of them being poor sight and deafness.

A responsible breeder would avoid this by mating a Labradoodle with another breed that won’t affect the offspring’s genetic makeup in a significant or noticeable way.

When you’re adopting a doodle puppy, you should ask about the bloodlines and ensure that one of the parents is a solid color. In a lot of cases, an ordinary Labradoodle may have some color patches on its fur. This could be a sign that they have a merle gene, yet that doesn’t have to be the case.

Those who haven’t bought their dogs from a carefully chosen breeder may want to check this on their own and find out about their pet’s lineage.

Testing is an essential part of every breeder’s work; they don’t check each dog, but they do check every breeding pair.

This is also an essential thing to do if you plan to breed your dog because mixing two Merle Labradoodles can cause a variety of health problems in the next generation.

Which generation to choose? Choosing the generation and the percentage of different breeds depends on what you’re looking for in a dog.

Some traits and abilities will increase or decrease with more breeding. It’s important to talk this over with your breeder before you make a decision.

It’s also essential that you’re clear about what you’re looking for in terms of both looks and behavior.

There’s a lot a breeder can do for you as the science behind their work has advanced so much in recent years.

Some Labradoodles look just like Labradors but don’t cause allergies, but producing such offspring takes time and skill. Merle Labradoodles are mostly desired for their beautiful and cuddly fur and the variety of colors they come in. There’s great diversity, and it depends on the breeding and the lineage of a particular dog.

Merle doodles come in chocolate, black, merle, blue merle, and it’s possible to generate some even more outlandish colors, such as sable, fawn, apricot, and a lot of different diluted shades of red.

There’s an ongoing debate between those who prefer a red merle to a blue one, with the blue one being the winner in popular demand, at least for now.

The most commonly sought after colors are chocolate merle and blue merle. Blue merle is an especially popular choice with people looking for a family dog.

It’s a loyal and loving animal whose fur makes some of the greatest Instagram pics. The shade ranges from very light to very dark or steel blue.

These dogs come in two different sizes, known as standard and mini. This is also a useful quality for potential owners as they can choose their dog based on their living space. In the long run, it will make a Labradoodle that much easier to handle.

When it comes to sizes, it’s also important to know where your dog comes from, as there’s a difference in the lineage and the breeding that was done before. A standard Merle Labradoodle weighs in at 55–60 pounds, and a mini one varies from 15 to 25 pounds.

You can find out more about this dog’s size in our Labradoodle growth chart. There are a few health issues we must refer to when talking about Merle Labradoodles.

Merle doodle puppies have a much higher chance of being born deaf, and that’s why the American Kennel Club (AKC) stopped registering the offspring of two merle doodles back in 2013.

There are also auditory issues that are common in this breed. They include microphthalmia, conditions that cause increased ocular pressure, colobomas, among others.

The problem is again more common with a double merle than with dogs that are bred properly.

One of the biggest attractions of having a Merle Labradoodle is their wavy fleece coat that can also be curly with proper care.

These dogs don’t shed, and that means almost no allergic reaction to them.

Needless to say, to avoid allergies, the owner needs to pay special attention to grooming if they want to keep the coat clean and hypoallergenic.

The coat color will also remain as it was when you got the dog (other than the changes that happen with the natural process of aging) if you trim the coat every 6 to 8 weeks.

It’s also a good time to trim the nails and give the dog a nice spa day.

This is especially true for dogs with a brindle pattern sometimes referred to as a “tiger-striped” coat.

They need to be brushed once a day so that the fur doesn’t become tangled, ensuring the stripes are easy to see and admire. There’s not that much difference between merle puppies and puppies of an ordinary Labradoodle.

For that matter, there’s also very little difference between them and another dog breed that came about by mixing poodles with other breeds. For instance, a Bernedoodle is just as beautiful and affectionate as a Labradoodle.

They are an energetic bunch who’ll take up at least an hour of your day for a nice long walk. This dog breed is also rather intelligent and thus easy to train.

After some consistent training, they will follow simple and more complex commands.

However, keep in mind that this dog breed is not a Labrador retriever and that the poodle part will meddle with the genes. This is especially true for a multigen Labradoodle, which is starting to show signs of tempering within the breeding process.

As we’ve already said, this quality and temperament are true for Labradoodle puppies, but an elderly dog may bring something of their upbringing and (not always good) experiences to your home. That’s the risk of adopting a dog, but there’s a great reward to it, as well.

How do you get a Merle Labradoodle? Merle Labradoodles are rather popular with Aussie dog owners, but they can be found all across the world as the breeds needed for producing them are widely available.

There are two main ways to get one, and it depends on how important breeding is to you and how much you can spend.

The most common way to do so is to find a reputable breeder and make sure that your dog will have the proper lineage and that it will be as healthy as it can be.

That’s only done by making sure that both the poodle and the Labrador are 100 percent purebred. This is the most expensive option, and the price varies based on the size of the puppy.

Australian Labradoodle puppies will set you back around $3,000, and there are some specific tax issues to take into account as well.

Another way to go is to adopt, which is less expensive but gives you less information about your dog’s genetic makeup and breeding.

Putting the dog’s origins aside, adopting an animal is rewarding and fulfilling. Rest assured that the dog you rescue will be forever grateful.

There are other costs to factor in beyond the dog’s price, and that’s something you must consider from the beginning.

The expenses are mostly related to pet insurance, which is necessary as these dogs have various potential health problems.

Secondly, grooming can be a bit challenging as it needs to be done daily or weekly, depending on how carefully and thoroughly you do it.

It’s something you must plan ahead because it will help your dog’s fur remain shiny and healthy in the long run. 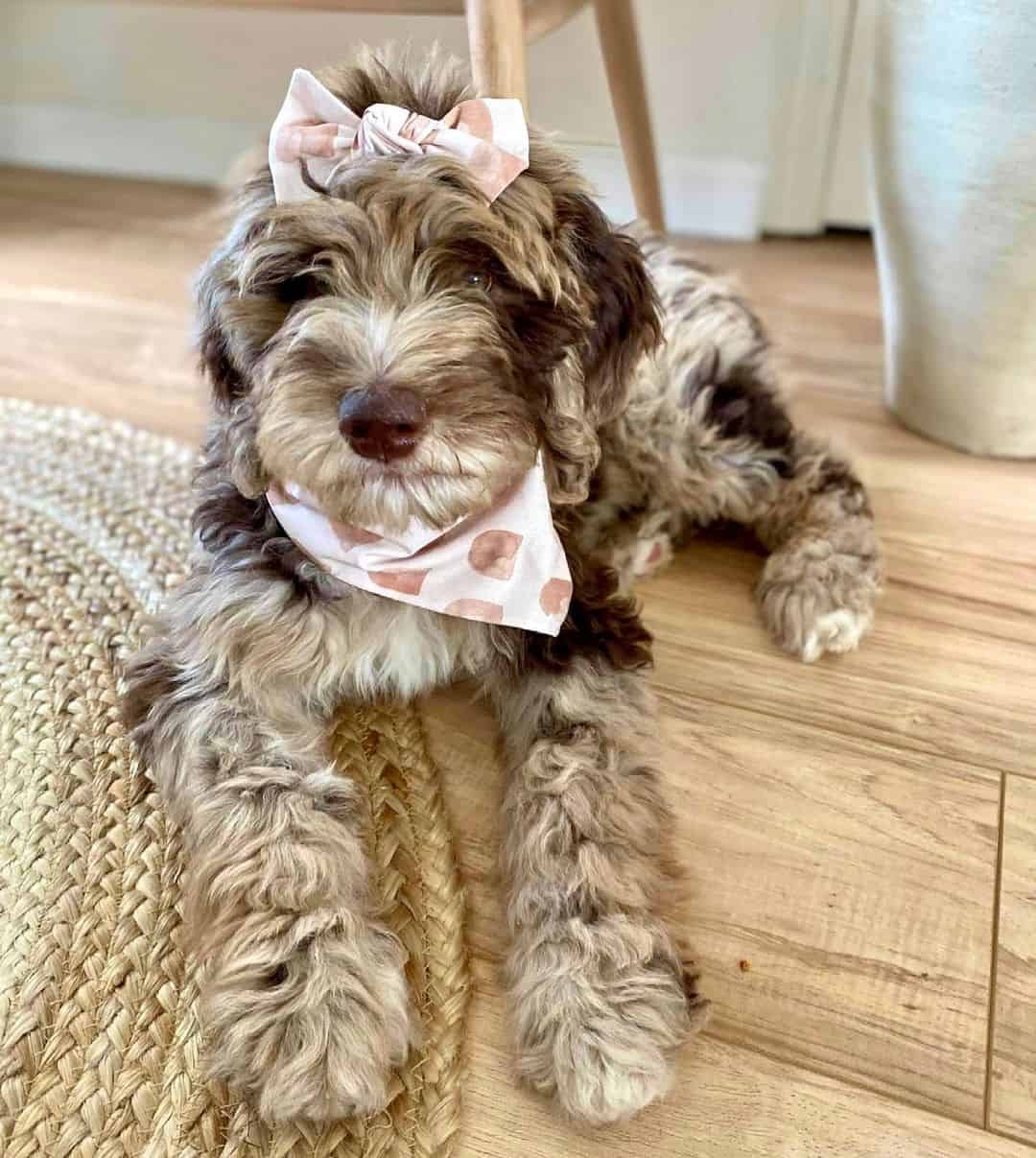 Getting a family dog can be a complicated decision; you need to consider the personality, amount of work taking care of a dog will demand, and the overall appearance and looks.

There are also concerns for those who are allergic to dog hair.

When all of this is taken into consideration, a Merle Labradoodle is one of the best options for a family dog because it has some of the best qualities of its lineage and very few disadvantages.

However, getting a dog is still a big responsibility, and it will require grooming and training. 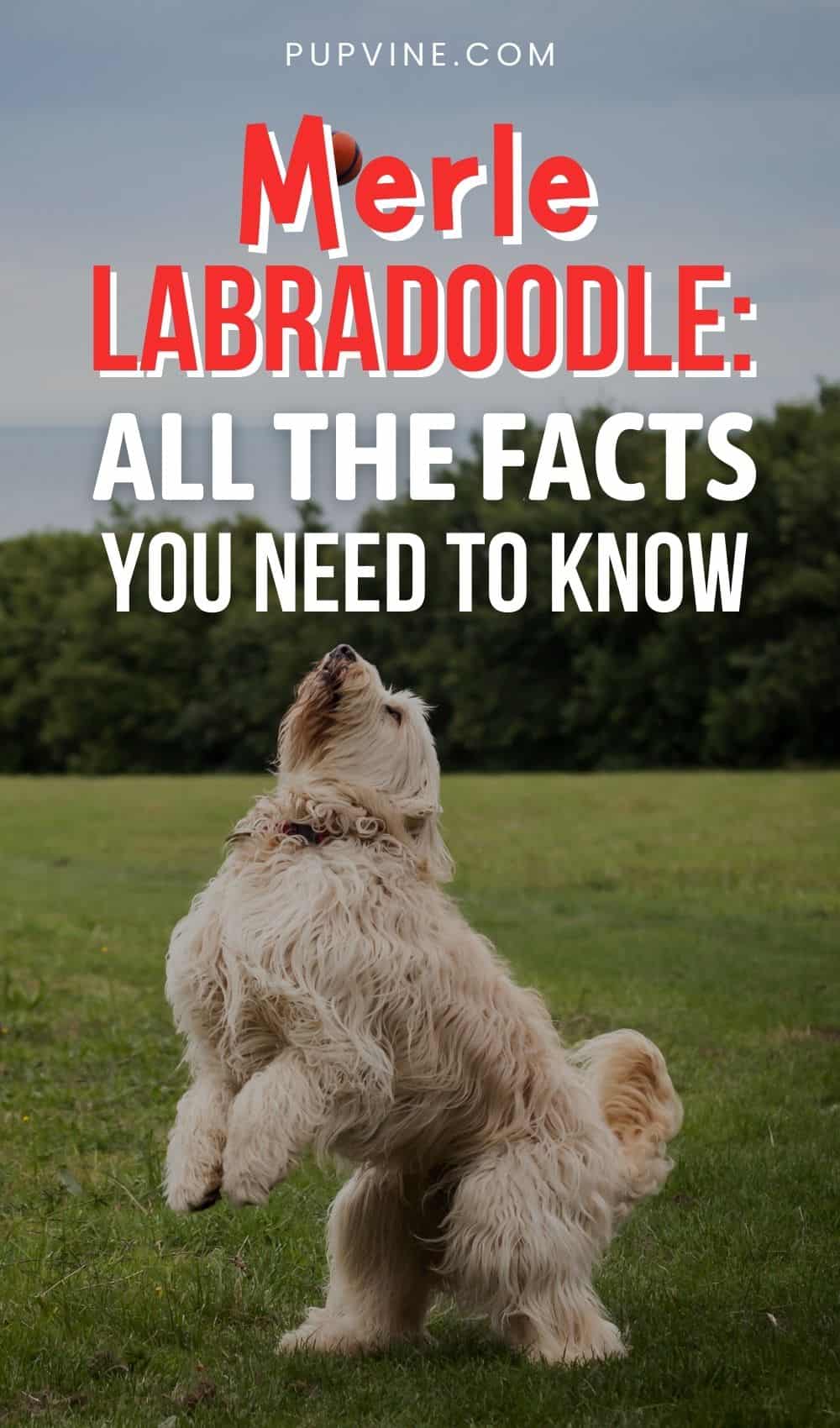 […] have various colored Labradoodles, but the chocolate, chocolate Parti labradoodle, and Merle Labradoodle are the ones that they have quite […]

[…] a Goldendoodle or a Labradoodle isn’t as difficult as it seems. However, there are some tips and tricks if you want to have a […]

Dudley Labrador: Everything You Need To Know About The Pink Nose Lab

[…] Even though they can compete in show rings, there’s often some prejudice against them. Some people go as far as to consider them as a mixed-breed due to their unique color. […]

Micro Labradoodle: What You Never Knew About These Dogs