If you’re thinking of getting a German Shorthaired Pointer puppy, and you are a bit worried about how big they can get, you’ve come to the right place because in this article, we talk in depth about all points of a Pointer’s growth.

As its name says, the German Shorthaired Pointer is a breed of dog developed in Germany as a hunting dog. Don’t confuse them with German Shepherds since their names do sound similar, but they are two different breeds.

Not only is it an excellent sporting dog breed, but it is also a great family companion. It is an intelligent working dog, a good house dog, and perhaps one of the best dogs to have.

From the beginning, they have been bred to be high performance hunting and sport dogs. Because of this, they have quite a distinctive appearance – lean, sturdy built, long legs, and a distinctive looking coat.

They are quite similar to Labrador Retrievers in size and body weight; however, GSPs are about an inch taller, and Labradors (on average) weigh 10 pounds more than German Shorthaired Pointers.

As a dog owner, if you are interested in knowing at what age does your GSP puppy stop growing, and how big will it eventually get, keep reading because in this size and weight chart, we provide you with all the information you need!

Birth To 2 Weeks Of Age

When German Shorthaired Pointers are born, their puppy weight is between seven and 10 ounces.

They are quite delicate, and they require their mother constantly. Their mother is their source of food and warmth for them, and she also cares for them because they are still unable to take care of themselves.

This is probably the most crucial period for puppies because they are so vulnerable. At this period, they are unable to walk, they don’t see or hear, and they require optimal temperature since they are prone to developing fever.

In the first two weeks, they will mostly snuggle with their mother because she is the crucial part of them surviving and growing healthy. After this, they will start to get more independent as they grow.

During this period, your puppy will start developing more, and thus, become more independent. Their muscles start becoming stronger, so they begin to walk. At around eight weeks, they should be able to walk properly.

By five and a half weeks of age, they will start growing their teeth, and they will be fully weaned, which means that the breeders need to start feeding them.

Around 12 weeks of age is usually a period when people pick up their puppies because at this time, they are ready to be given to a family.

4 Months To 6 Months Of Age

During this period, your puppy will start growing significantly, eating more and gaining some weight. Each month, it should be able to gain at least five pounds more; males even up to seven pounds more.

At four months of age, the differences between males and females will start to be seen. At six months of age, your German Shorthaired Pointer female will weigh, on average, between 26 and 42 lbs, while on the other hand, males should be around 31 to 49 lbs.

During these two months, GSP puppies also go through teething.

Some GSP puppies might be quite slim, and you may think they are underweight; however, that is normal, and you shouldn’t be concerned because they will probably gain muscle mass later on.

Do not try to give them more food before you consult your vet and get his approval based on a medical examination because it can lead dogs to gain weight and cause obesity.

7 Months To 9 Months Of Age

If your puppies are healthy and everything is alright, they will be growing and gaining some weight each month.

Males will still be slightly bulkier than females. However, when you compare them to other dog breeds, GSP puppies still look a lot skinnier.

At nine months, females will probably be around 42 to 49 pounds, and males between 49 and 57 pounds.

So, the time has come to celebrate your pup’s first birthday. Sadly, they grow up so fast.

Also, in this period of up to 12 months of age, your puppies will be in heat. Females are fertile during this period; however, it is not advised for them to give birth because they are still too young and have not developed completely.

What Age Do German Shorthaired Pointers Calm Down?

A German Shorthaired Pointer reaches its adulthood at around 1.5 years of age, which may be considered late compared to small dogs, which reach adult weight at about nine months.

At this time, they stop growing, so their adult weight is approximately around 70 pounds for males, and 60 pounds for females.

Regarding their adult size, they are considered a large breed, with females standing on average at 22 inches, and males, 24 inches at the withers.

The differences between males and females are also recognized by the German Shorthaired Pointer Club of America, stating how males indeed look more masculine, whereas females look more feminine. 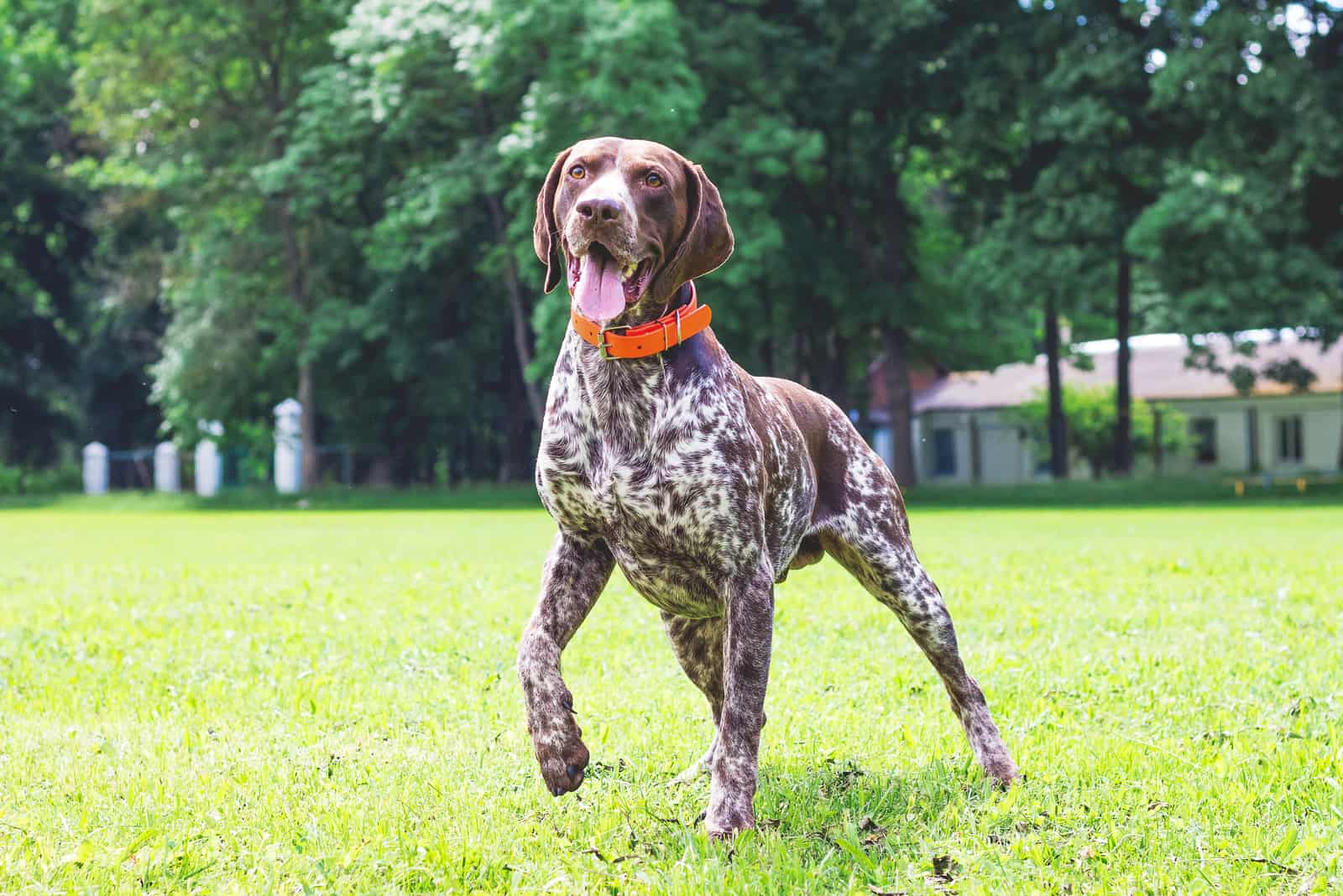 In order to know exactly what the right size and weight of your puppy is, you will need, of course, to measure and weigh your puppy.

To measure your German Shorthaired Pointer, you will need a flat ground and a tape measure. A dog’s height is measured from its shoulder blades (withers) to the ground – not from the top of its head.

Sometimes, it will be difficult to keep your Pointer standing straight and calm. You can try to divert its attention from what you are doing with a toy or some treats. You can also get some friends or family members to help you with this.

When you succeed in this, the distance from your pup’s withers to the ground will be your puppy’s height.

In order to weigh your German Shorthaired Pointer, you will need a dog scale. However, if you don’t have one, and you don’t want to purchase a new one, don’t worry because you can also do it with a normal bathroom scale.

In the beginning, your puppy will probably be nervous and fidgety, but don’t give up because over time, he will get used to it.

Measuring and weighing your dog every few weeks, and later, (months) is really important in order to track his/her growth, and to know if your puppy is developing healthily. 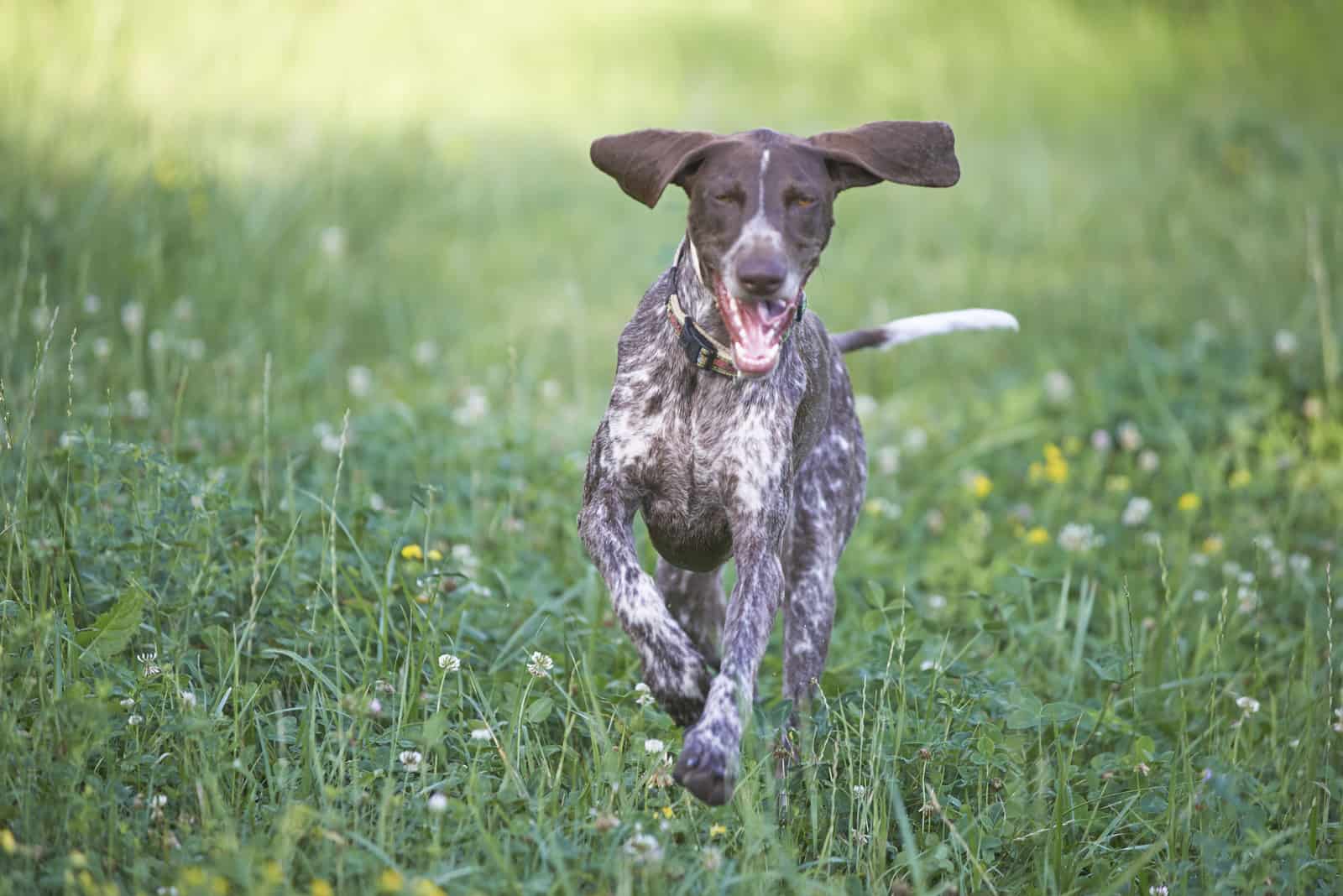 There are a lot of factors that can affect your German Shorthaired Pointer’s Growth. The nutrition they receive, the genetics that they have, and their activity level impact greatly on the development and growth of your puppy.

As a responsible pet owner, you should regularly bring your puppy to vet checks to constantly monitor its weight, size, growth, and general well-being. This can seriously prevent the onset of diseases.

Nutrition is one of the most important aspects when it comes to healthy development. You must remember your mother saying that you need to eat all the vegetables and healthy stuff in order to grow up tall and strong.

Well, the same thing can be applied to your dogs. The amount of food as well as the type of dog food play an important role in achieving healthy weight and size.

Always try to choose high-quality dog food, and keep track of how much they should be eating based on their age and size.

As well as food, hydration also plays an important role when you have such an active dog because they can become dehydrated easily. Make sure that your dog has constant access to water, so they can drink when they are thirsty or feeling hot.

As natural hunters, German Shorthaired Pointers are known to need vigorous exercise and a lot of activity to stay healthy.

If you don’t keep them entertained and allow them to be active, they will easily get bored, but more importantly, it will greatly affect their general health.

Exercise is much needed for normal development and for growing strong muscles. Not only will they turn to mischief if they are bored, but they will also not have an opportunity to allow bone density to grow.

A higher activity level will result in a higher energy level, which will positively impact the dog’s weight and growth.

Even though German Shorthaired Pointers are generally healthy dogs, they still can have certain health conditions.

They are genetically predisposed to having diseases like hip dysplasia, cancer, skin problems, eye conditions, and epilepsy. Hip dysplasia is a genetic condition which causes the structures of hip joints to not fit together, causing deformity.

Many factors can contribute to this condition, like environment and diet; however, it is always important to look for breeders who have health clearances for these diseases.

It is also possible to ask for DNA testing in order to determine if there are some indications that your puppy will develop some conditions. However, if you have access to its parent’s information, then DNA testing should not be necessary.

Genetics have also impacted them positively, earning them a place as one of the smartest dog breeds worldwide.

We know that sometimes it can be difficult to determine whether your puppy is growing normally, so this is why we have prepared this German Shorthaired Pointer Growth Chart to make things easier for you.

However, you should always remember that not every puppy is the same, and that we are discussing some average numbers here. But, if your dog is a bit smaller or bigger, don’t be too concerned.

You should always check with your vet to make sure everything is alright, and not stress too much about it; otherwise, just make sure your puppy is getting proper nutrition and love and everything should be perfect.

[…] ideal feeding schedule for this active dog will depend on factors such as age, size, and activity […]

40 German Dog Breeds That You Will Love

[…] The German Shorthaired Pointer growth chart describes this sporting dog as a medium to large breed. Its size makes the GSP prone to health conditions, such as canine hip dysplasia. […]