If Max von Stephanitz knew he’d make the world’s most popular dog breed, he’d be ecstatic. Even though GSDs are nowadays used more as companion pets than the working dogs they were bred to be, they’re still valuable dogs.

There are numerous German Shepherd quotes online, especially on memes and other funny pics. People tend to say all sorts of things when it comes to these dogs. But, one thing is for sure: the sayings are nothing but positive!

Scroll down to see some of the best German Shepherd quotes and see if you know any of them. We’ve got to warn you: some are quite funny quotes, but some are the cutest ever. They’ll make your heart melt! 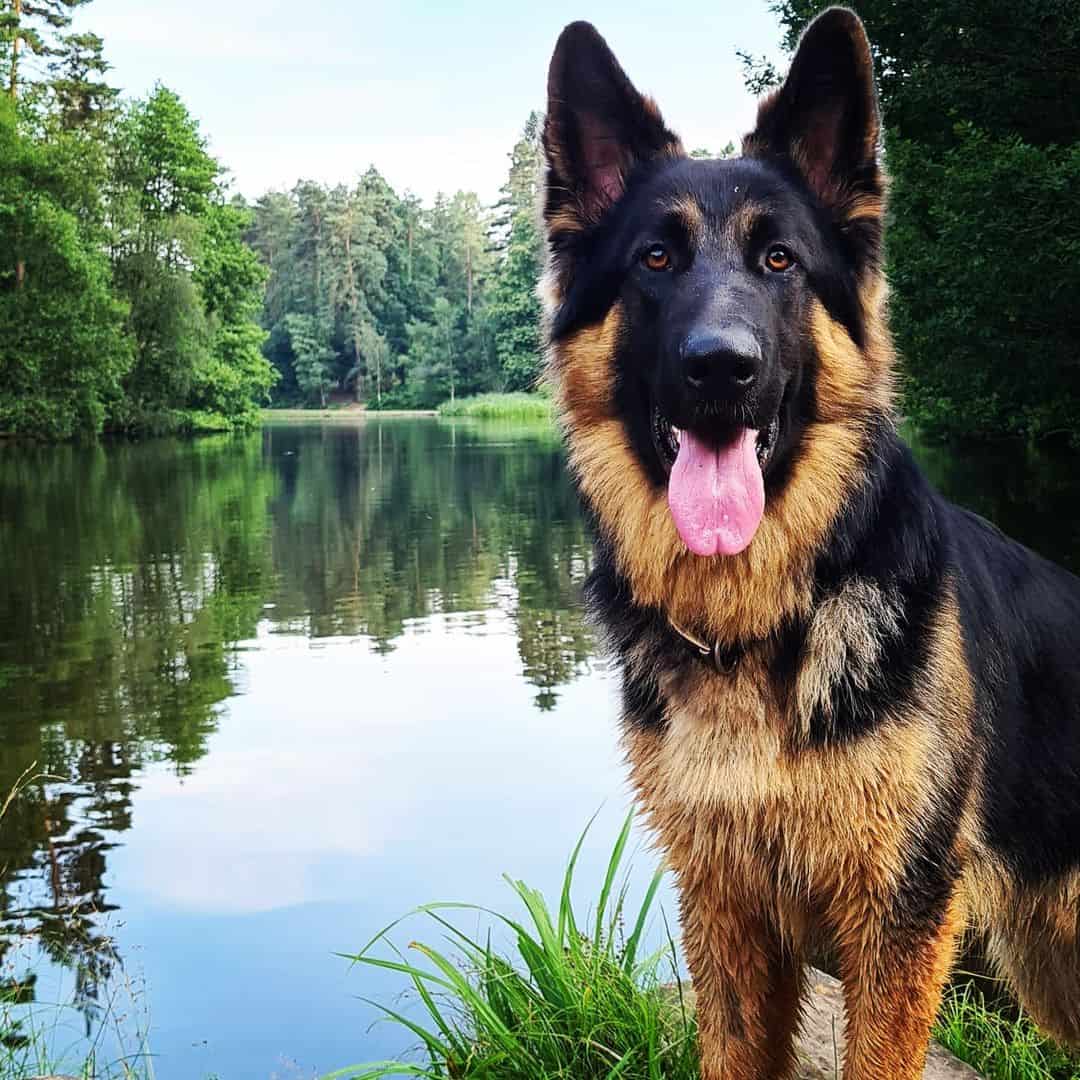 The GSD is among the finest purebred dogs out there. This super friendly and affectionate dog makes the perfect family pet for many families across the world.

Dog lovers worldwide agree: the German Shepherd Dog is a high-quality purebred hound that can only enrich your life.

From the former US president, Harry S. Truman, to celebrities like Marilyn Monroe, the love for this popular dog will never fade.

Take a look at some of these popular, pretty standard quotes about this pooch!

3. “No one appreciates the very special genius of your conversation as a dog does.” – Christopher Morley 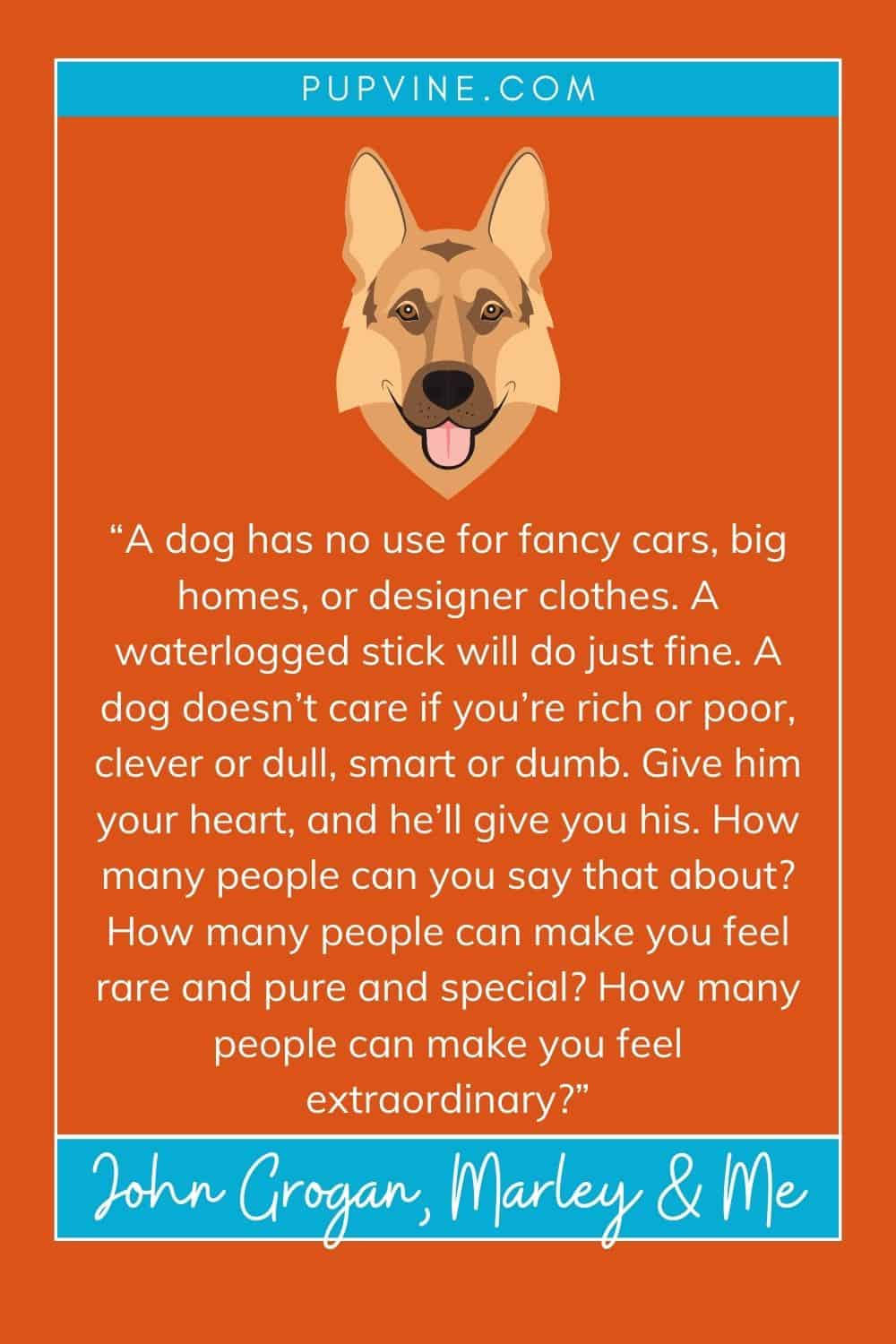 4. “A house is not a home without a German Shepherd.” – Unknown

6. “The German Shepherds are so smart that they understand every language you speak, not just German.”– Unknown

7. “German Shepherds are very hard-working: they work like dogs.”– Unknown

8. “If you think dogs can’t count, try putting three dog biscuits in your pocket and then give him only two of them.”– Phil Pastoret

9. “The average dog is nicer than the average person.”– Andy Rooney

10. “Leave me alone. I am only talking to my German Shepherd.”– Unknown 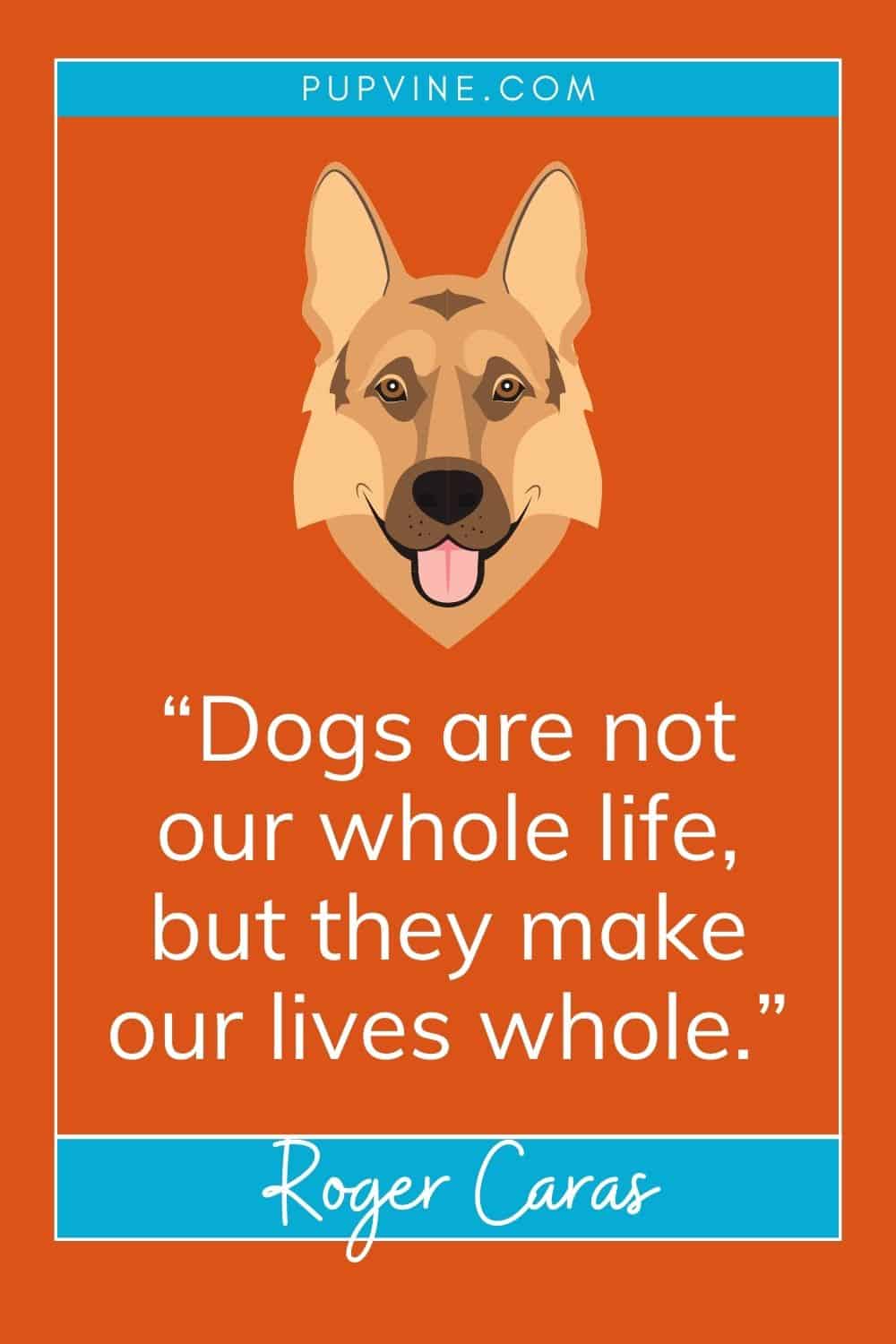 11.”Nobody is perfect, but with a German Shepherd, you are damn close.”– Unknown

12. “The only thing better than coffee is my German Shepherd.”– Unknown

13. “I was thinking of getting a German Shepherd once, but I didn’t want to learn another language just to have a dog.”– Unknown

To get the best idea about how much they shed, check out the following quotes:

1. “German Shepherds only shed twice per year: January to June and then again July to December.”– Unknown 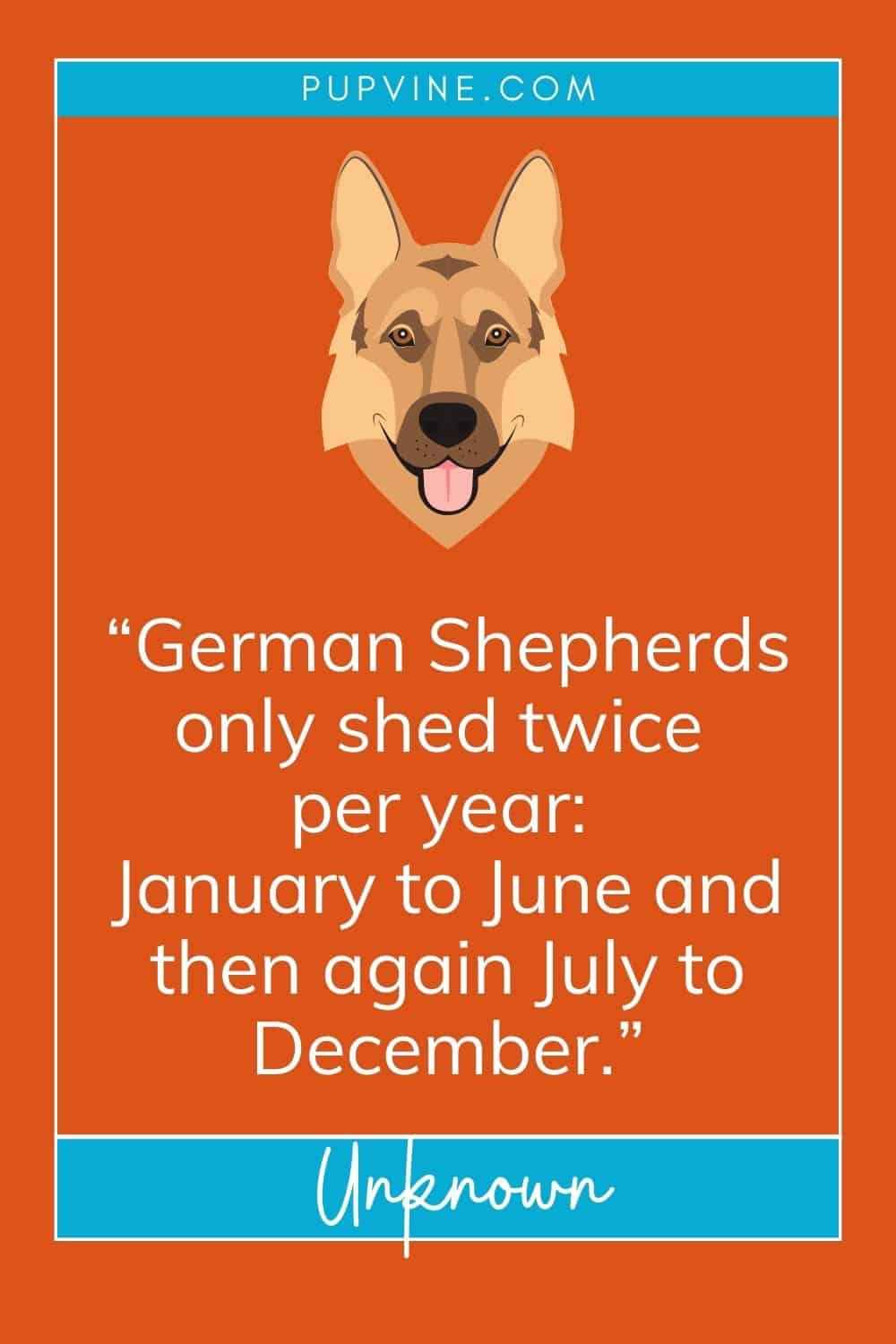 2. “No outfit is complete without my German Shepherd’s hair on it.”– Unknown

See, told you it’s only twice a year!

The German Shepherd And Exercise

The GSD is a large dog, meaning they have lots of energy to spend. That’s why it’s super important to keep them on a regular exercise schedule. If you can’t spare at least an hour a day to exercise with your pup, then this is not the dog for you.

1. “If you want to lose weight, adopt a German shepherd. They are the best running mates in the world. What better way to exercise than running with man’s best friend?”– Unknown

2. “Your dog can become the toughest running partner that you have ever had and will keep you motivated.”– Unknown 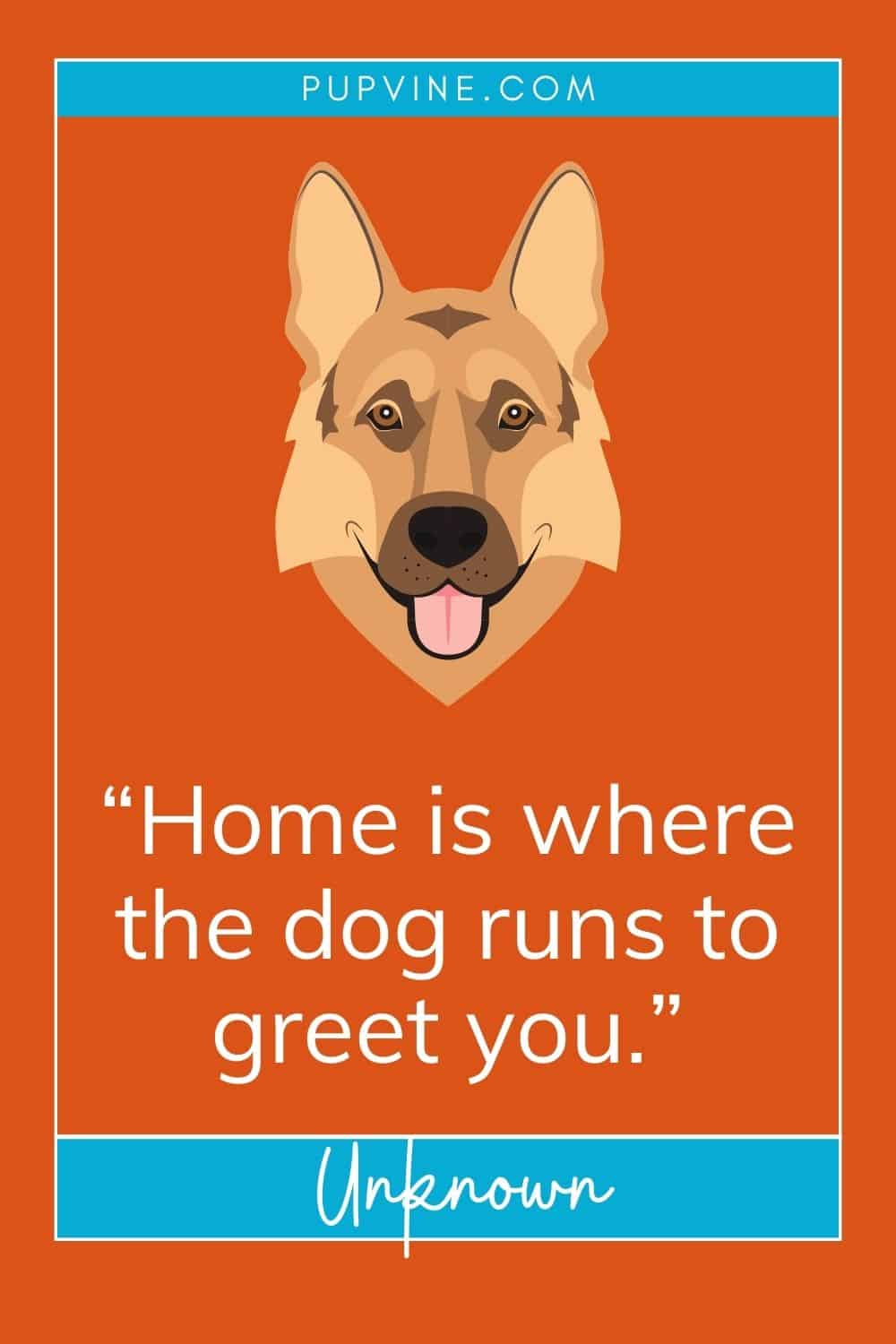 3. “Even though the German Shepherd loves running, remember to not let them run too far when they are young to avoid damaging your puppy’s joints and bones that are not yet fully formed.”– Unknown

You can learn a lot about this popular dog breed, almost everything you need to know, from our quotes!

Oh, boy, they are some protectors!

Let’s put it this way: there is no better canine protector than a German Shepherd. Even German Shepherd puppies tend to develop that protective trait early on.

If you’re not sure they’re the best security dogs, then maybe these quotes will make you believe:

1. “German Shepherds like barking. Especially when they feel lonely being separated from their human family.”– Unknown

2. “When a German Shepherd gets lonely, you can expect a lot of barking.”– Unknown

3. “Why spend $5,000 on a home security system when I’ve already got a German Shepherd?”– Unknown

4. “I believe in integrity. Dogs have it. Humans sometimes lack it.”– Cesar Millan 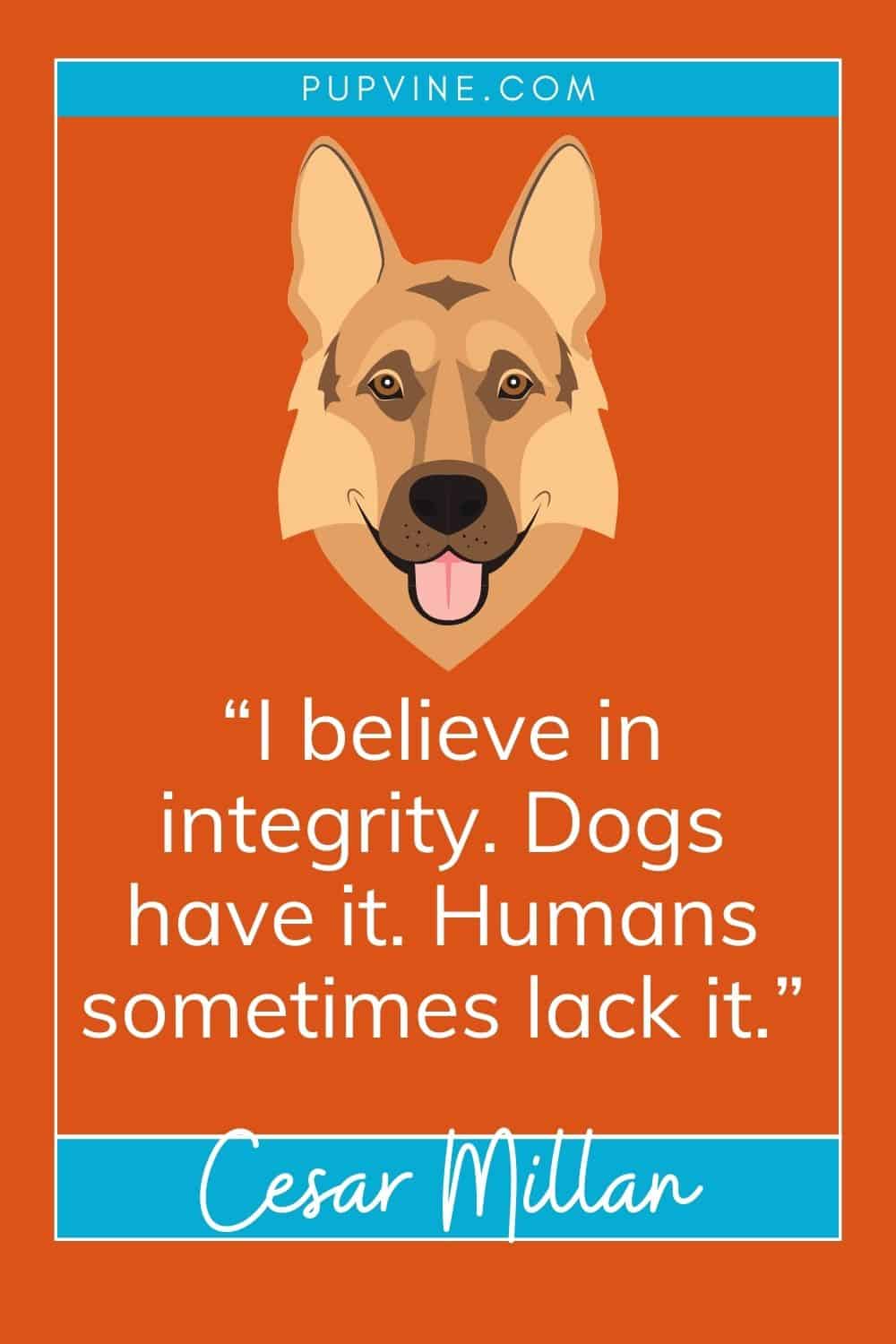 5. “Don’t trust anyone who doesn’t like a German shepherd.”– Unknown

7. “If you want to avoid having your German Shepherd barking at night, keep your four-legged buddy inside the house with you.”– Unknown

See, their loyalty is well-known among the people, including the dog whisperer, Caesar Milan, himself!

The German Shepherd as Best Friend

All dogs are our best friends, but German Shepherds are the best of the best (if that makes sense).

We can only stop, look, and admire these canine heroes.

Oh, and we can also take a look at quotes regarding GSDs as best friends: 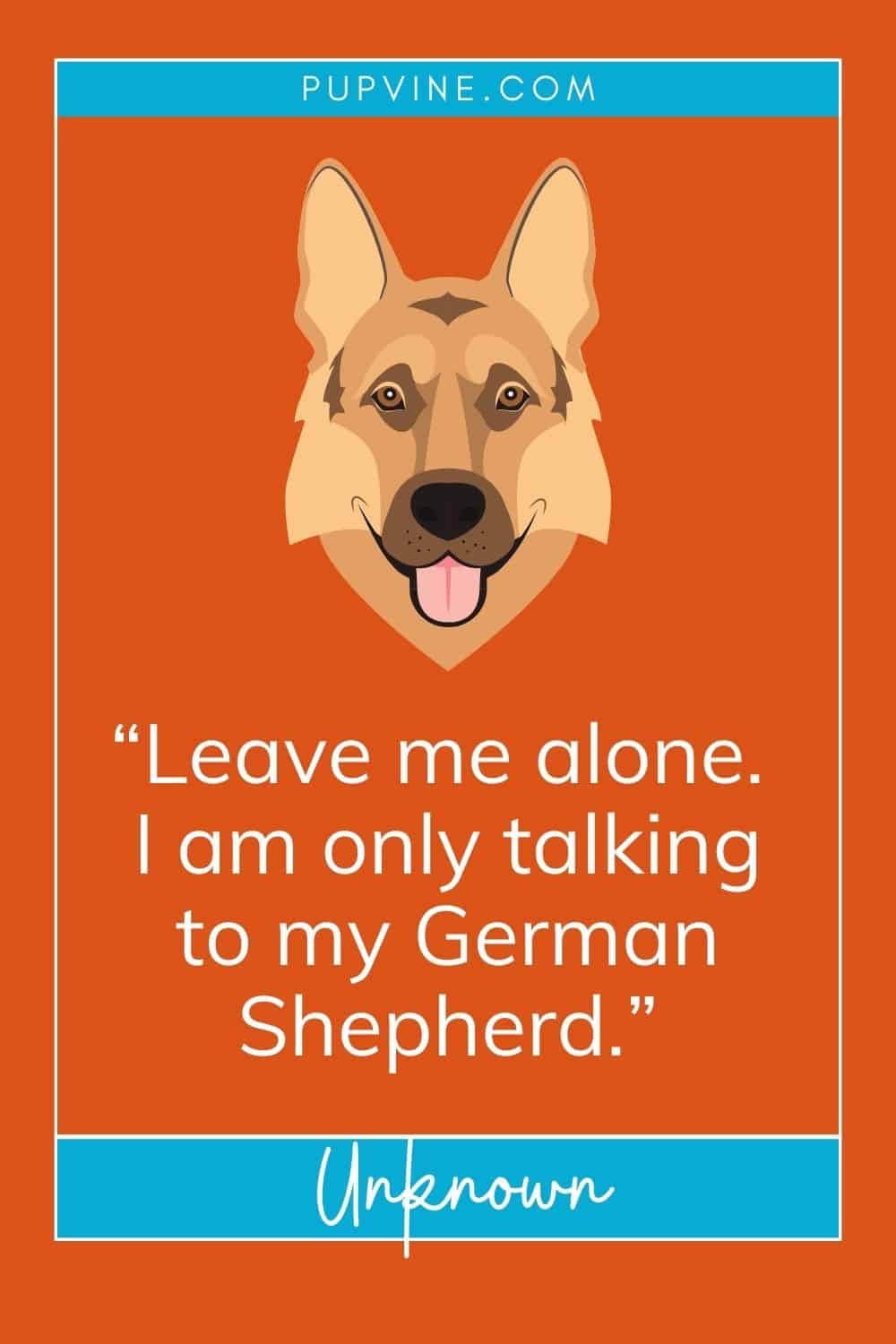 2. “What did humans do to deserve German Shepherds?”– Unknown

3. “Never trust anyone that doesn’t like your German Shepherd.”– Unknown

4. “A dog can snap you out of any kind of bad mood that you’re in faster than you can think of.”– Jill Abramson

5. “Money can buy you a fine dog, but only love can make him wag his tail.”– Kinky Friedman

6. “All you need is love…and a German Shepherd.”– Unknown

7. “When an eighty-five-pound mammal licks your tears away, then tries to sit on your lap, it’s hard to feel sad.”– Kristan Higgins

8. “When I look at my German Shepherd, I don’t see a dog. I see a friend, a family member, a protector.”– Unknown

9. “Home is where the dog runs to greet you.”– Unknown 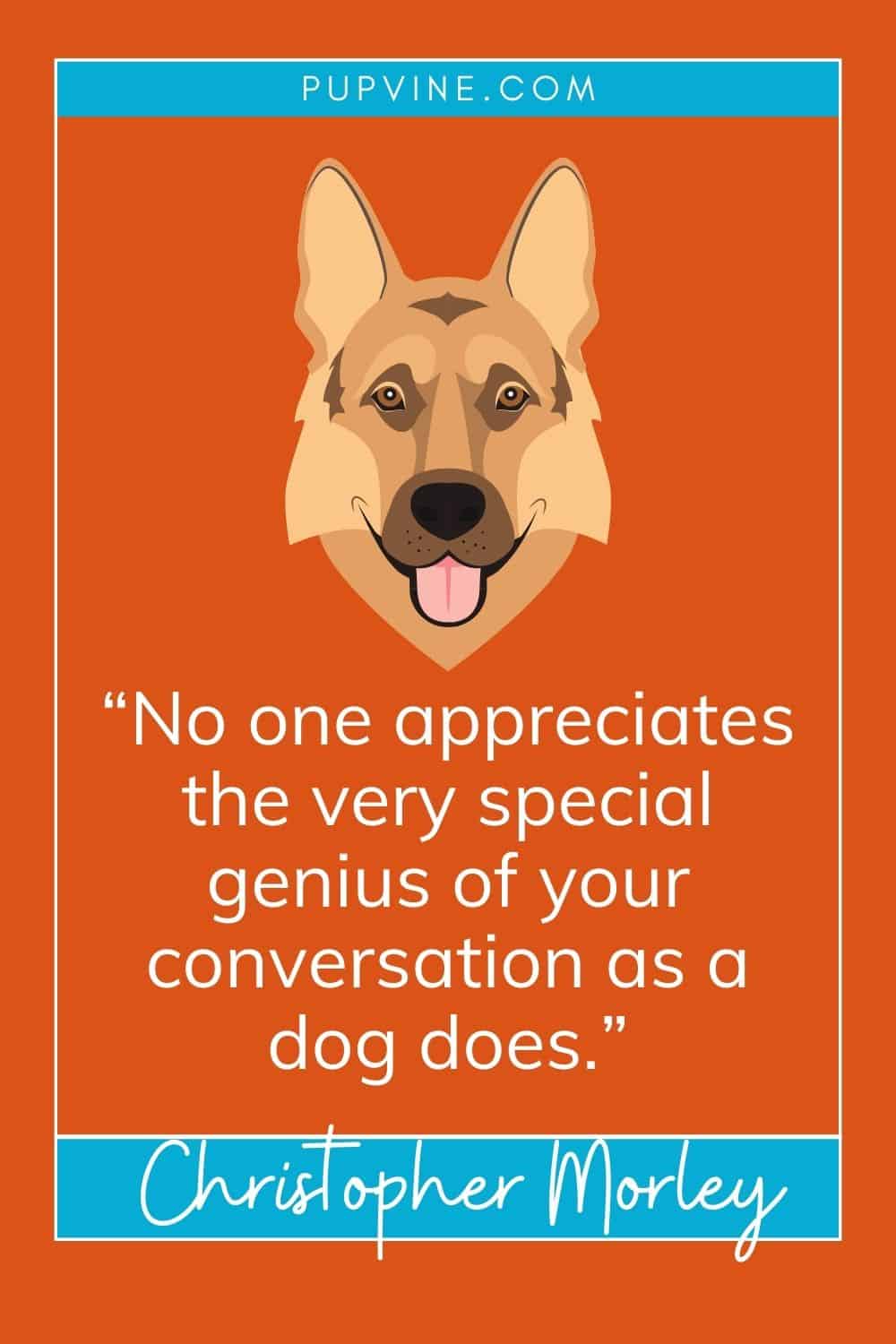 11. “Who needs a best friend when you’ve got a German Shepherd?”– Unknown

12. “STRANGER: How many kids do you have? ME: 3 including the one with big ears that sheds all the time.”– Unknown

14. “My German Shepherd makes me happy, even if men don’t.”– Unknown

15. “German Shepherds are where the heart is.”– Unknown

16. “My German Shepherd is like a good wine…He warms my soul in ways no person can.”– Unknown

17. “A German Shepherd is one of the only dogs in the world that loves you more than he loves himself.”– Unknown

German Shepherds are so beloved. Lots of celebrities have spoken about how special they are.

The love for these cute dogs with tough appearances is real, and it makes for some great inspirational quotes.

Take a look and see if your favorite actor or author loves the GSD too!

1. “Dogs are not our whole life, but they make our lives whole.”– Roger Caras 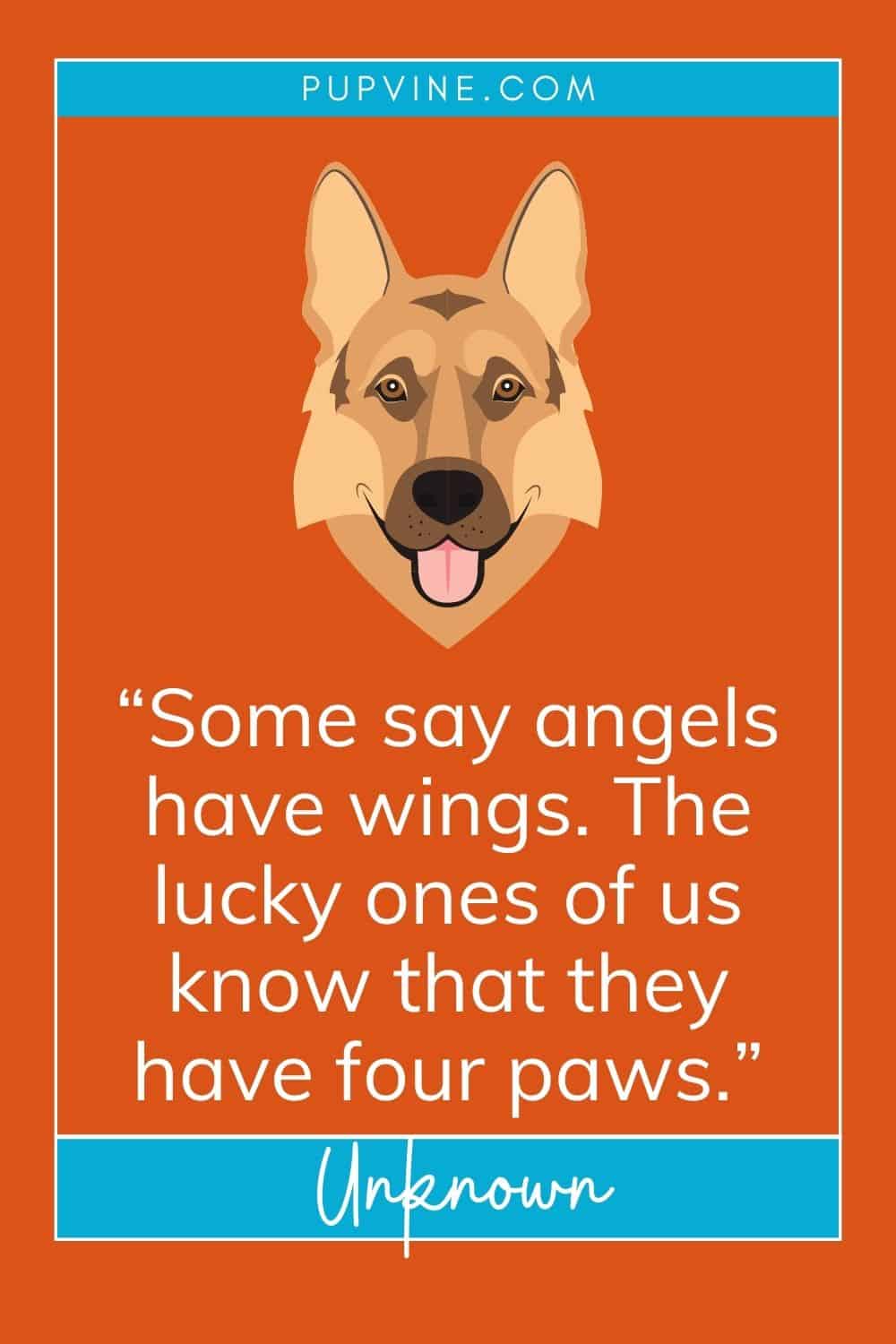 2. “Dogs are our link to paradise.”– Milan Kundera

3. “If you pick up a starving dog and make him prosperous, he will not bite you. This is the principal difference between a dog and a man.”– Mark Twain

4. “The only creatures that are evolved enough to convey pure love are dogs and infants.”– Johnny Depp

6. “I think dogs are the most amazing creatures; they give unconditional love. For me, they are the role model for being alive.”– Gilda Radner

7. “A dog will teach you unconditional love. If you have that in your life, things won’t be too hard.”– Robert Wagner

8. “Dogs do speak but only to those who know how to listen.”– Orhan Pamuk

9. “There is no psychiatrist in the world like a puppy licking your face.”– Ben Williams 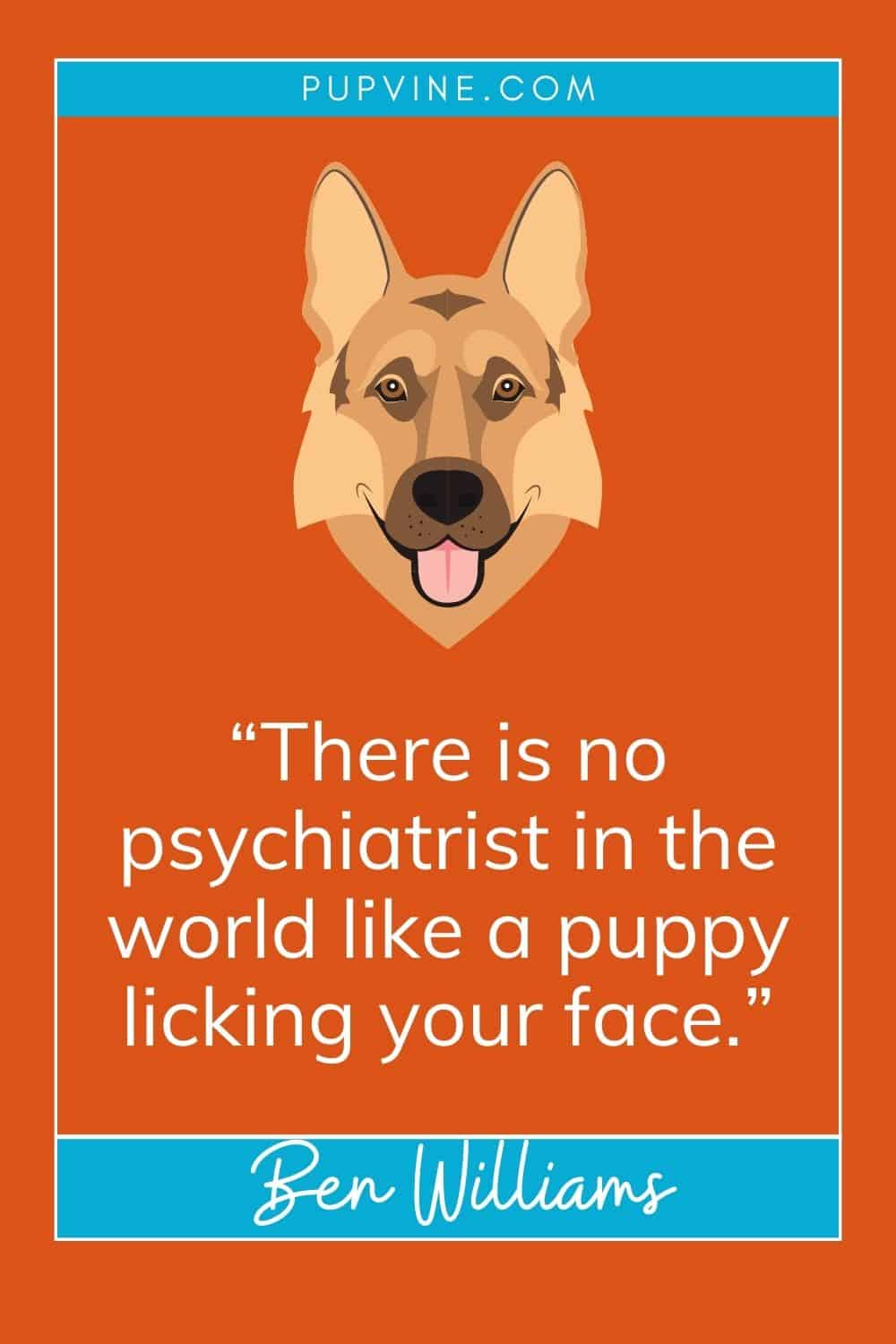 11. “If there are no dogs in Heaven, then when I die, I want to go where they went.”– Will Rogers

12. “Dogs love their friends and bite their enemies, quite unlike people, who are incapable of pure love and always have to mix love and hate.”– Sigmund Freud

13. “Dogs are better than human beings because they know but do not tell.”– Emily Dickinson

14. “The world would be a nicer place if everyone had the ability to love as unconditionally as a dog.”– M. K. Clinton

15. “There are three faithful friends: an old wife, an old dog, and ready money.”– Benjamin Franklin

16. “Some say angels have wings. The lucky ones of us know that they have four paws.”– Unknown 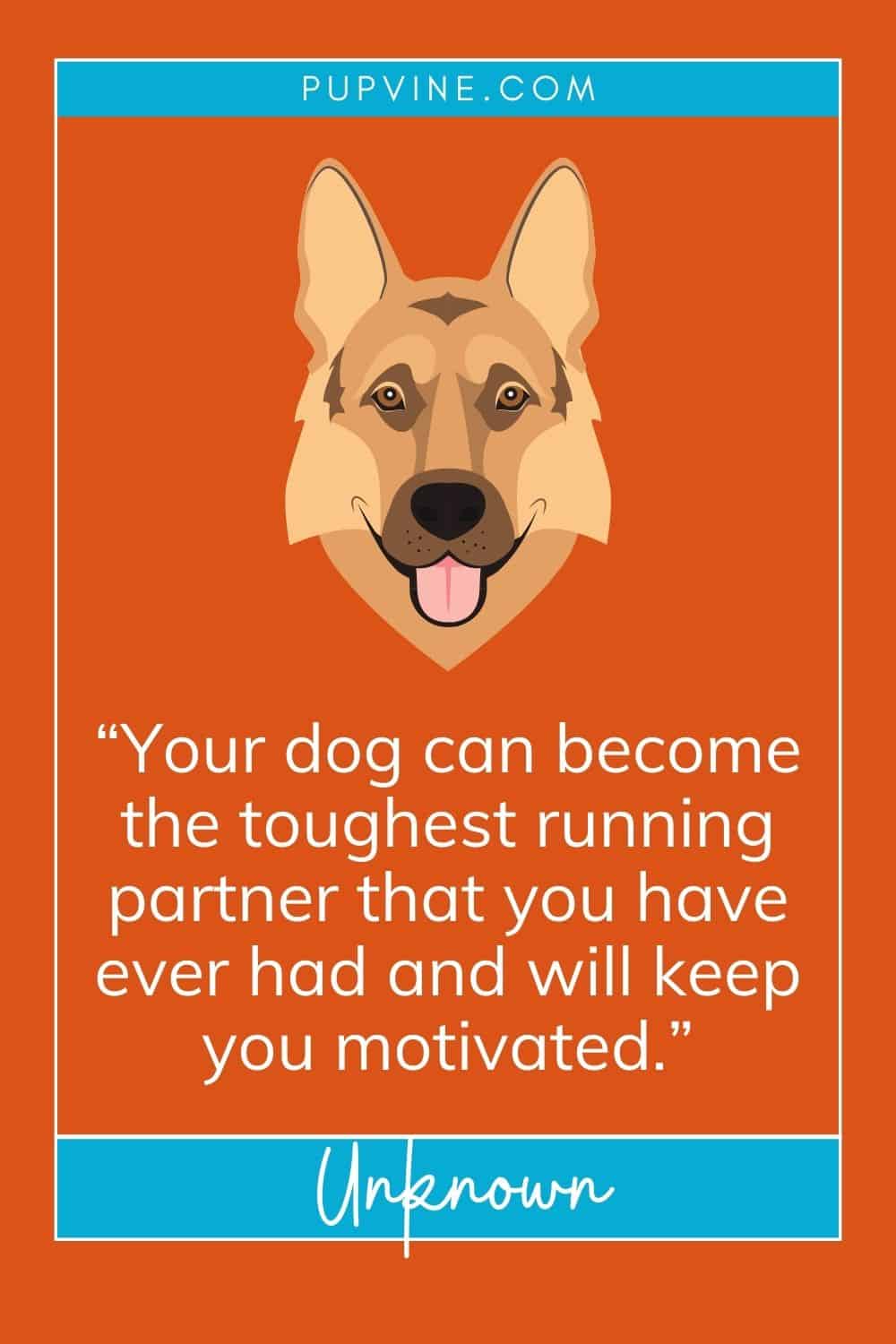 All dogs deserve love. All dogs are special. All of these quotes can be applied if you have a Pitbull, Labrador, Rottweiler, Chihuahua, Dachshund, Poodle, Pomeranian, Golden Retriever, or Border Collie.

The point is: all these quotes are awesome. Can you imagine walking down the street wearing a T-shirt that says: “Leave me alone. I am only talking to my German Shepherd“? 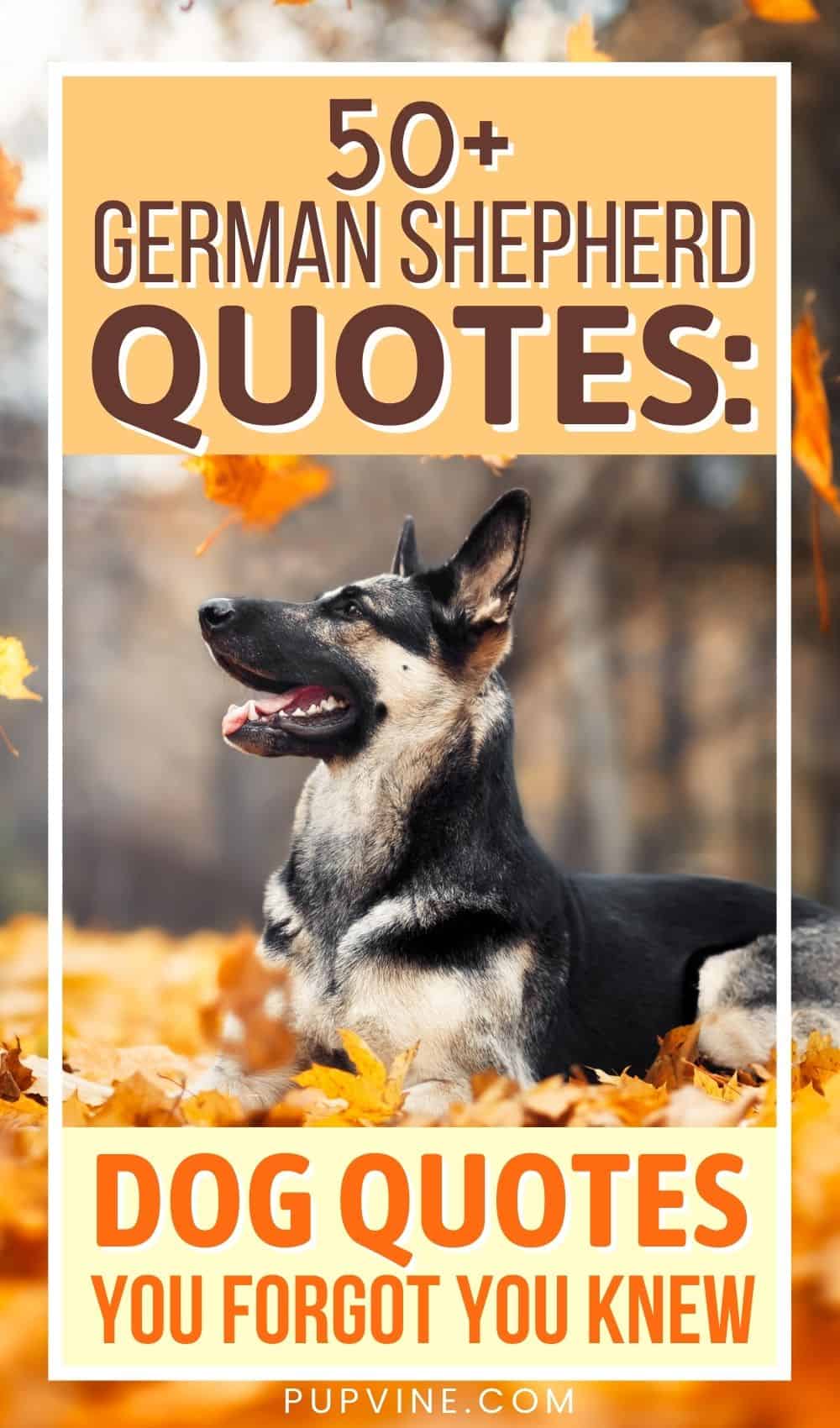 24 Muscular Dog Breeds You Don't Have To Be Afraid Of

The Greatest List Of Dog Quotes: 150+ Best Quotes You Will Ever Read

[…] since dogs have been around humans, many intellectuals, philosophers, and even celebrities have had a thing or two to say about their beloved […]

[…] adorable pooch never gets old. In fact, there are so many German Shepherd quotes from famous celebrities and people that show just how popular this dog breed […]

[…] like tan and black, red and black purebred German Shepherds are very popular dogs, and their prices can be […]