Admit it: you probably had no idea what an English Goldendoodle is!

Don’t worry at all. We’ve got you covered. We chose ten things about this amazing crossbreed that will leave you wanting to have a dozen of these puppies at least.

Although there’s so much more to find out about this cute mixture of two incredible purebred dogs, these are the ones you should know first.

Let’s see together what’s so special about these golden puppies!

1. How the Golden Retriever and the Poodle Fell In Love Oh, the 1990s! Such a turbulent decade! Many of the famous couples warmed up our hearts and later shattered them into pieces when they broke up.

Many, but not the Golden Retriever and the Poodle. These two love birds fell for each other and their love was crowned with a puppy: the Goldendoodle!

The Goldendoodle is considered to be one of the latest additions to the Doodle family, right after the Cockapoo and the Labradoodle.

The whole point of creating another Doodle was to get a puppy larger than the others, but still having low-dander and non-shedding to low-shedding coat features, and possessing the loving nature of the English Golden Retriever.

Most of the Goldendoodle pooches are still young, which means they’re the result of first-generation breeding. This means that the mom and dad are still Toy Poodle and Golden Retrievers. Goldendoodles are probably the most fantastic family pets. They’re loving and obedient fellows who love their family and devote themselves completely to it.

Because of their teddy-bear look, the Goldendoodles are extremely popular. No wonder they’re true social dogs!

Your Goldendoodle will be the happiest around you, the rest of the family, and your other pets. The more, the merrier! The terms family companion and family dog fit these dogs the best.

However, if you leave them alone for a certain period of time, they’ll turn their back to obedience and become frisky little rascals.

Getting them over to the obedient side isn’t complicated at all, even for rookies! They’re such smart creatures that are easy-going and very eager to please.

You’ll see that you’ll have a well-behaved puppy in no time. Yes, puppy, not a grown dog! Unfortunately, Goldendoodles aren’t purebred pups… they’re a crossbreed, or better yet, a designer dog that shows signs of being a hybrid vigor. But, what is a hybrid vigor?

For those dog lovers who haven’t had a chance to hear this before, a hybrid vigor is: a cross between two unrelated dog breeds, which are purebred, that happens to be healthier and better than any parent line.

Now that you know what a hybrid vigor is, you’ll notice how the cross between the Poodle and the Goldie is one tremendous puppy!

4. The Generation G: Breeding the Goldendoodle As we mentioned before, the Goldendoodle is a fairly young dog breed, meaning most of the dogs are still direct offspring of the original parent breeds.

The English F1 Goldendoodle is a mix between an English Golden Retriever and a Poodle. This combination is divided equally: 50% Goldie and 50% Poodle.

The first-generation Goldendoodles seem to be light shedders. Some pups don’t shed at all while others have a moderate level of shedding. This is terrific news for families with allergies who are seeking a dog.

The F1 mini Goldendoodle is the number one choice for anyone suffering from dog-hair-triggered allergies because of their loose and wavy coats.

The English and the Australian F1B Goldendoodles are a cross between several bloodlines: the English F1 Goldendoodle and the Poodle or Australian Labradoodle. The statistic has two variations:

The Australian F1B Goldendoodles are also called the Double Doodle. The Double Doodle is considered to be an F1B that has been crossed back to an Australian Labradoodle. They’re dogs blessed with silky soft, completely non-shedding coats.

The F1B backcross usually happens when the Goldendoodle breeders cross an F1 Goldendoodle with a Poodle or an Australian Labradoodle.

This Goldendoodle carries loose and wavy to curly and plush toys, making them the cutest teddy-bear Goldendoodles!

The multi-generation Doodles are a combination of an F1B crossed with another F1B or a multi-generational Goldendoodle. Their coats can range from wavy to curly, depending on the parents. What’s certain is that their coat will be completely shed-free! Truly, it’s the coat that makes these pups so special at first glance.

Depending on the generation, the Goldendoodle can have various shedding levels. The F1 Goldendoodle coat usually sheds a small to moderate amount of fur. There can be some hair flying around at some point, but it is more likely there will not be any. So, there’s no point in shaving this pup, as many people think otherwise.

Yes, those dark jeans you own will be thanking you for getting this Doodle!

The Goldendoodles are the finest allergy-friendly pups. The American Kennel Club or AKC recommends many other dog breeds for allergy-prone people, but their list has a lot to do with the fact that the Goldendoodle isn’t AKC recognized.

The F1B Goldendoodle sheds even less than the F1, but the level of shedding can vary from non-shedding to light.

Test the parent dogs’ coats for the right genetics and you’ll be sure to get a non-shedding puppy.

The F1B has a curlier coat, but it can still appear wavy and loose, depending on whether it takes after the father or the mother.

The coat length can go from three to six inches when left uncut. The color variations are numerous and absolutely stunning: 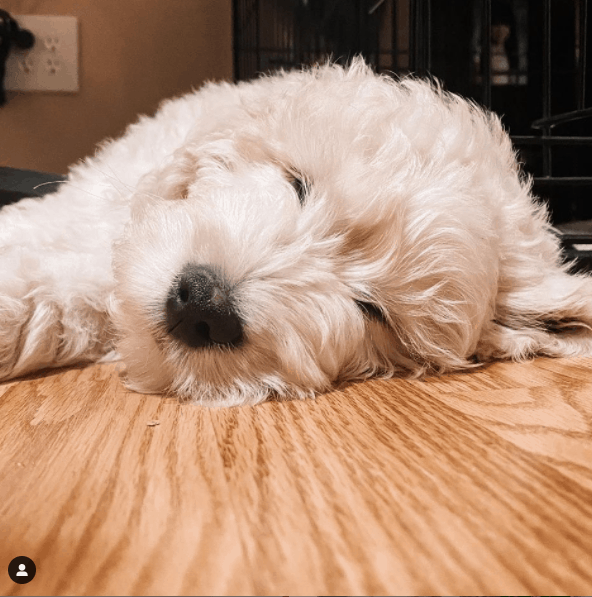 To keep their fluff very fabulous and soft, a regular brushing routine and semi-regular grooming sessions are a must.

6. English Goldendoodle Size: Not Bigger Than Their Heart If the English Goldendoodle was as big as its heart, then we would have a ginormous dog.

Good thing we got them so sweet, mini, and adorable!

The standard rule for detecting the crossbreed’s size is to add their parent’s weights together and divide it by two. This way, you’ll get the average adult weight of your pup.

Some examinations have proved that puppies that come from smaller dads tend to be smaller themselves. There isn’t a general rule. Many dogs go over and under the average size line.

Some are even so small, they’re categorized as petite, micro, and teacup, but that’s a whole different story.

But, still, there’s a general classification of three sizes:

7. Personality: The Sweetest Doodle of Them All No wonder why the English Goldendoodle became such a popular mutt. The list of his positive traits is endless.

These are the pups that are not afraid to show affection. They’re gentle and patient family companions that are especially good for people with small children.

Generally, the Goldendoodle has a nice temperament, both male vs. female. Of course, when the mood strikes, they can get a bit naughty, but all for the sake of fun. With proper training, potty training, and obedience they can be “A” students and exemplary pups!

Every dog needs to be socialized. Early socialization should be a must for every dog, not just our Goldendoodle pup.

It’s the only way to ensure that the puppy will grow into a dog that accepts people, animals, and situations that act differently on them.

When you have a dog that’s so easygoing, it would be a shame not to teach them obedience for the sake of a better life together. Since we’re talking about their life, it won’t be half bad to mention that Goldendoodles have an incredibly long lifespan of 15 years! Since we have already mentioned how important obedience training and early socialization is, let’s add another thing to that list. It’s called exercising.

The Goldendoodle has an average energy level, meaning he needs around thirty minutes of family exercise. This doesn’t mean you should let your dog run around like he’s got the zoomies.

Go play together! Take a walk, throw a ball, go swimming, wrestle around…

Or simply: have fun!

When getting a Goldendoodle, always check out the parent’s size to see how big your puppy will get. The Goldendoodle can grow up to be a large dog that needs space.

So, if you’re planning on squeezing one into your small apartment, better move to a place with a nice big yard or choose another Goldendoodle size.

9. Goldendoodles Taking Care Of YOU These Doodles are famous for being excellent therapy dogs for people with disabilities, especially for children. Their loving personality fits great with anyone, and they are perfect for any job that requires human contact.

Many English Goldendoodle dogs work as service dogs or therapy assistants. Isn’t it wonderful to have a dog with a purpose? The only difference in breeding between these two pups is the origin of their parents.

Still, there are many general differences between these dogs. Most of them are based on different health, temperament, and physical differences.

Since our topic of the day is the English Goldendoodle, a slight advantage goes in that direction, and also because they seem to be healthier than their American cousin.

Honest word: we were also surprised to see how wonderful the Goldendoodles are. They’re definitely little teddy-bear-looking angels of the dog world.

Now that you know so many Goldendoodle facts, how many puppies are you getting? One, two, ten? What’s your golden number? Australian Goldendoodle – What You Need To Know About This Breed

[…] Australian Goldendoodle is a cross between an Australian Labradoodle and an English Goldendoodle. They are a mix of different Poodle mixes, so some also call them Double […]