Having difficulty discovering deer head Chihuahua breeders in the U.S.? No surprise, considering that the majority of reputable Chihuahua breeders actually avoid breeding this type of Chihu mostly because they’re not mentioned in the breed standard of these canines.

Deer head Chihuahuas are unique in many ways – although they look very similar to “regular” Chihuahuas, they have their own set of physical and personalityfeatures that make them stand out from other Chis.

If you want to know more about this type of Chihuahua, and also check out the breeder that we came across, just keep reading this article.

However, don’t forget about purchasing dog equipment once you get your pup. If you’re not in the mood to go through endless shelves of dog beds, toys, and other items, you can simply order them through Amazon, Chewy, or any other shopping site that sells pet products. 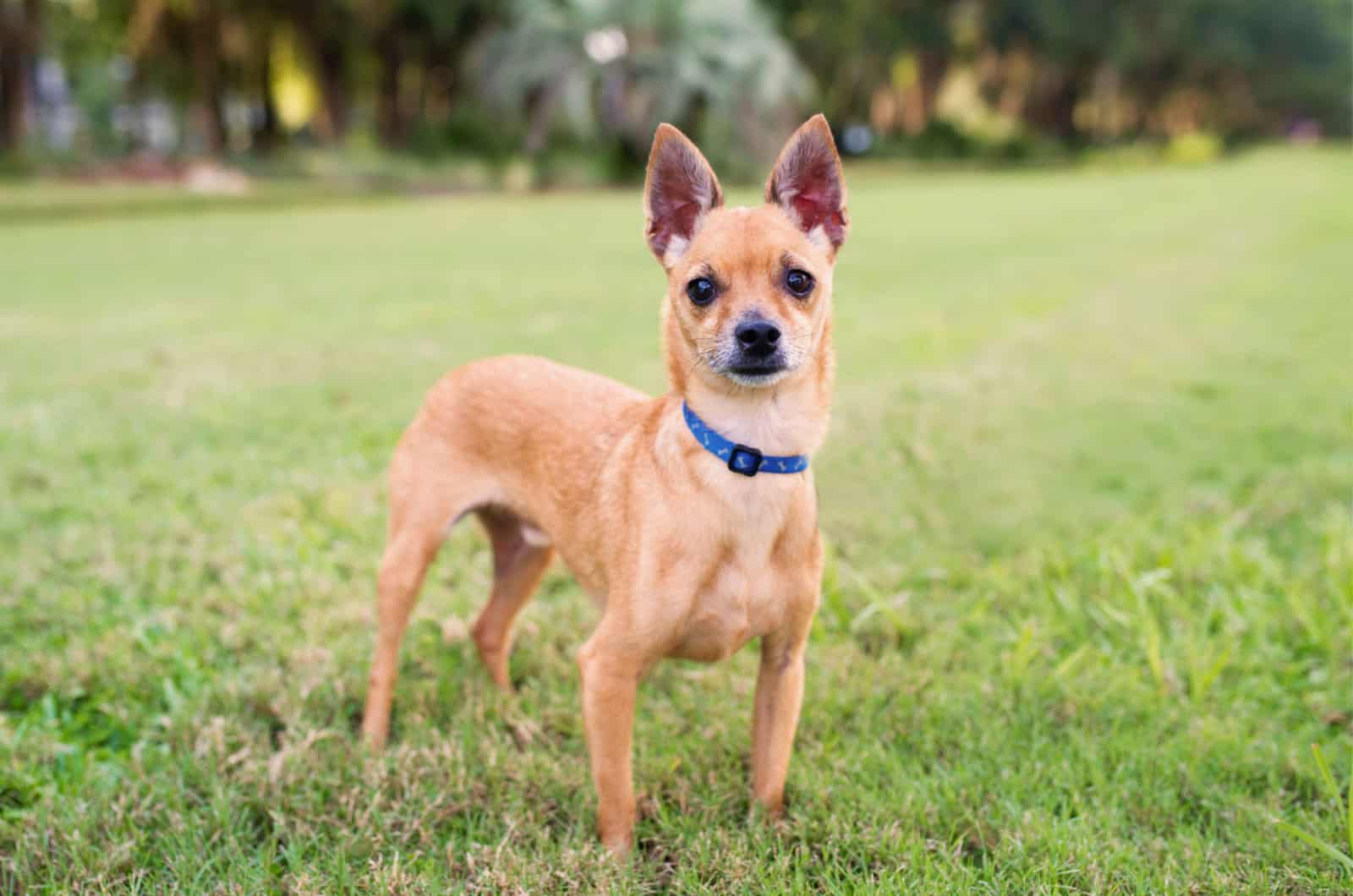 This is one of the rare places in the United States where you’ll be able to get this particular small dog breed of Chihuahuas.

Unfortunately, many breeders are trying to breed AKC Chihuahuas by any means, so they often put the AKC standard for the Chihuahua breed ahead of the puppy itself.

This breeder from Tennessee gathers several small but good breeders of Chihuahuas of all kinds, including their own-bred Chis.

From long-haired, apple head, deer head, short, and teacup Chihuahuas, all the way to the “perfect” Chis that are up to all standards, along with vaccinations, deworming, and health guarantees – this breeder has everything that you could wish for.

The main wish of the breeder was to finally find a Chihuahua dog that would be of solid bloodline, and with little to no health issues.

The owner has shared their story on their official website about dealing with puppy mills and the condition of the dog that they received.

That’s why they decided to go into the business of breeding and connecting dog breeders with potential clients who are interested in purchasing one of these little dogs.

The breeder is a strong advocate of adoption over purchase, if possible, which is essentially one of the reasons why they also offer pups that aren’t exactly up to the standard.

The owner and their family members believe that every pup deserves to be loved and cared for, be it the best Chihuahua or a “faulty” one.

The canines from Dreamer’s Pups are well-socialized as they’re not raised in cages and haven’t gone through any traumatic experience.

When it comes to the purchase of a deer head or any other type of available Chihuahua from this breeder, all you need to do is contact them.

The best way to do this is by filling out the short form on their homepage, where you provide basic information about yourself and decide which type of pup you’d like to take home.

The price of the pup seems to depend on the coat shade, gender, type of Chihuahua, and other factors. Therefore, the price varies anywhere from $1000 to about $3500, at least from what could be seen on their website.

If you have any other questions about this dog breeder, you can contact the breeder, who’ll be more than happy to answer all your questions. 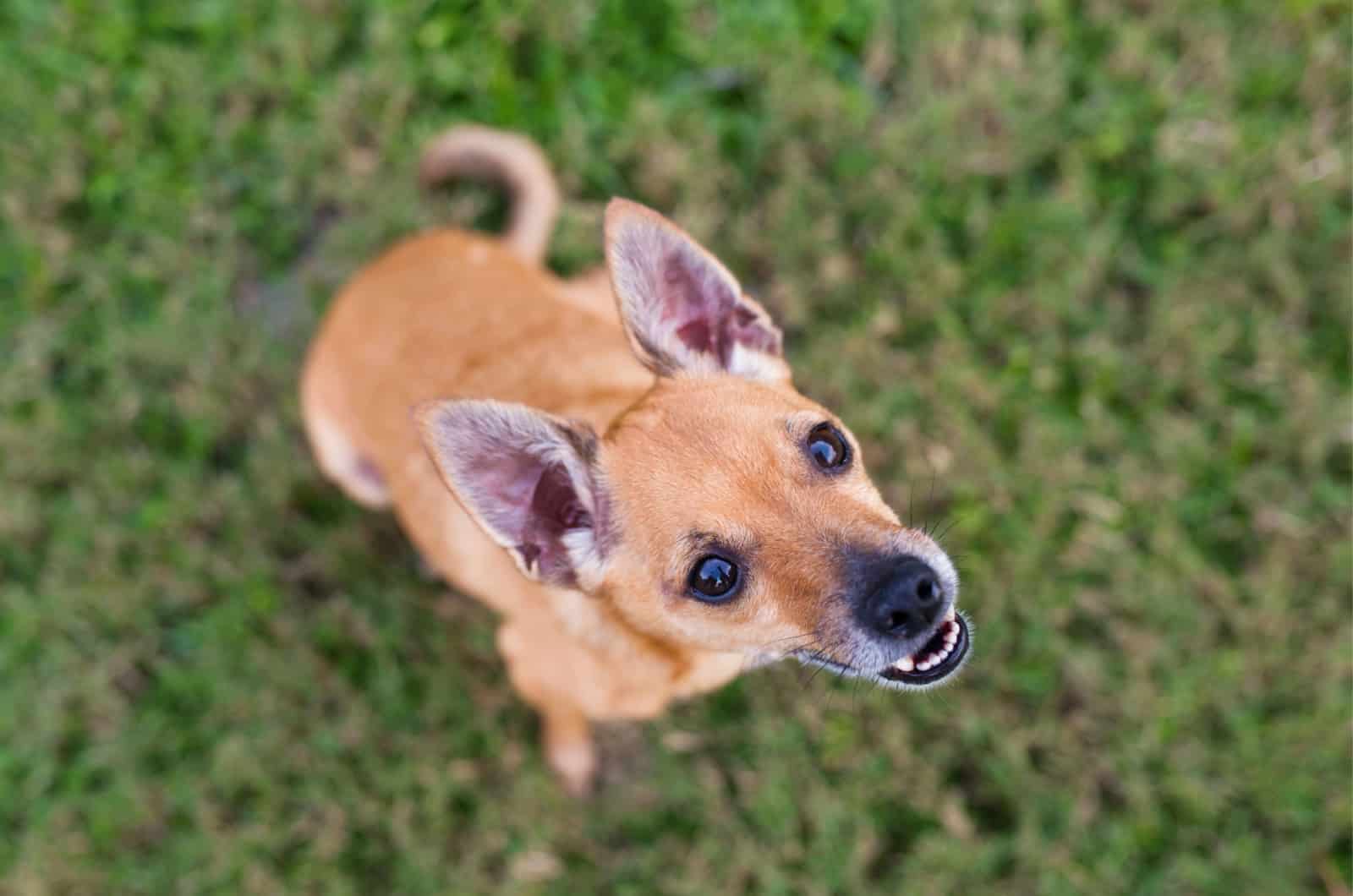 What Is A Deer Head Chihuahua?

The head of a Chihuahua is sometimes described as having a deer head or an apple shape. According to this division, the shape of their head determines their look and their personality traits.

There is a widespread belief that the Chihuahua comes in two varieties: the apple head and the deer head.

However, if you study the breed criteria for the Chihuahua, you won’t find that they are specified in that manner.The only types that are acknowledged by major dog institutions such as the American Kennel Club (AKC), the Canadian Kennel Club (CKC), and others are long-coat and smooth-coat Chihuahuas (a short coat).

However, they do require the head to have a well-rounded “apple dome” shape. These terms can be quite confusing, which is why we will determine what these two head shapes represent, and what the actual differences between them are.

How Do They Differ?

Unofficially, the look of a Chihuahua is sometimes referred to as having a deer-head or apple-head appearance, particularly in reference to the muzzle and overall facial shape of the breed.

The apple-head Chihuahua has a rounded, apple-like face that tapers to a sharp 90-degree angle at the point where the snout and the head meet.

Deer-head Chihuahuas have a longer snout, similar to that of a deer, with a sloping joint of around 45 degrees where the muzzle crosses the forehead.

This is essentially the main difference between these two types of pups, although they aren’t acknowledged by any of the major dog institutions, including the AKC, the CKC, the UKC, and the majority of Chihuahua Clubs.

The face of the deer-head Chihuahua resembles that of a young deer, which is where the breed gets its name.

A big snout, huge ears, and a forehead that slopes forward are some of these traits.

It was claimed that the Chihuahua’s ancestor was a small, old dog that was deaf, and was given the name, “the Techichi”. The Toltec inhabitants of Mexico have a favorable opinion of it.

There was a time in the history of the Chihuahua when the breed split into two distinct varieties that are, today, familiar as two different head shapes (including other differences between the two).

It is difficult to determine which type of skull occurred first because skeletal remains of Chihuahuas dating back thousands of years with both types of skulls have been discovered. 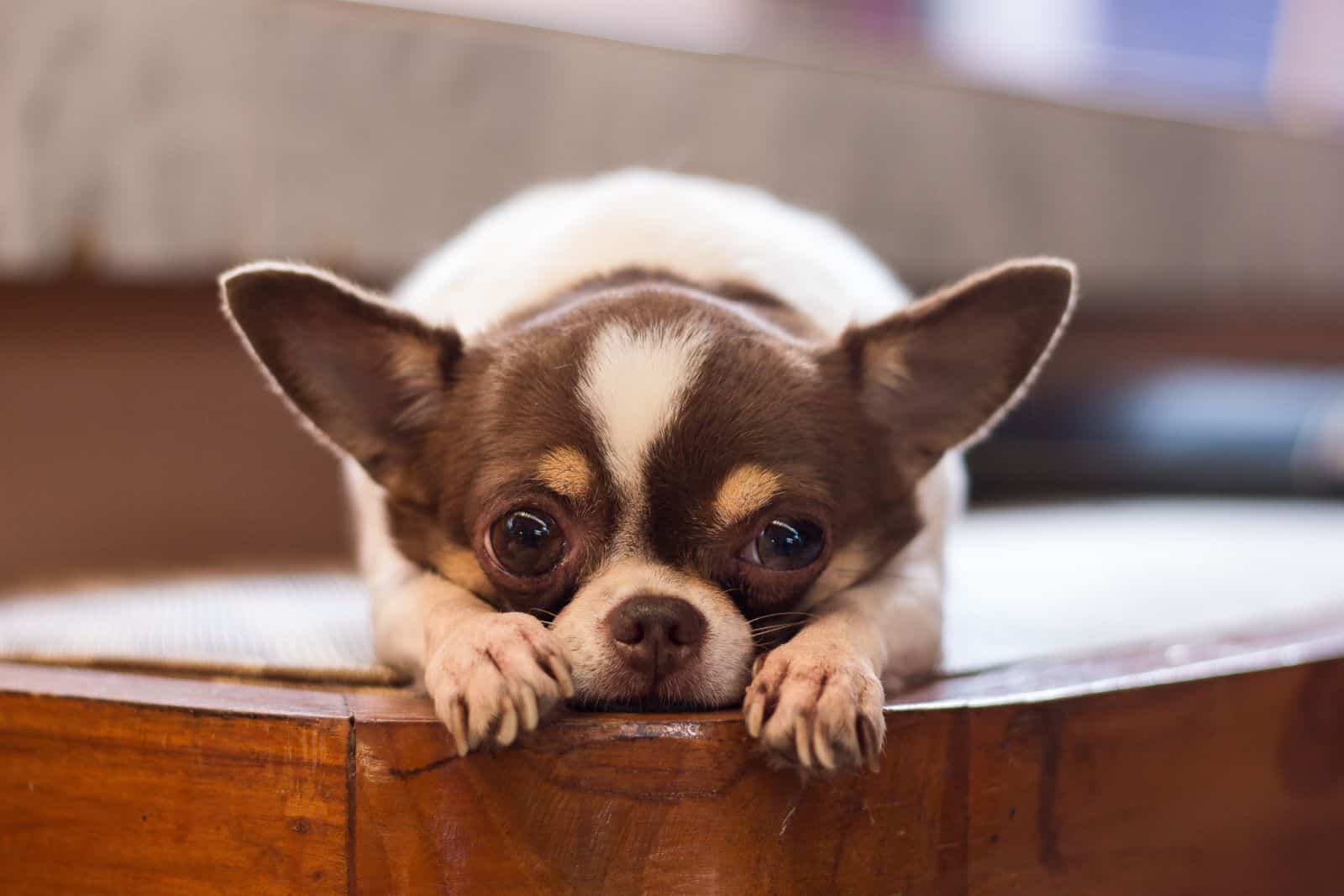 “Apple head” is a term used to refer to a Chi that has a head that is spherical or dome-like in shape, and it is comparable in appearance to an apple.

Apple-heads are characterized by having eyes that are particularly big, expressive, and lively due to the apple-shaped head.

The jaws and neck of a deer-head are longer, whereas those of an apple-head are shorter. It has a stocky stature, but its legs are very short in comparison to the length of the rest of the body.

Only apple heads of the apple-head kind are permitted to participate in dog competitions.

Why Is It Difficult To Find Deer-Head Chihuahua Breeders?

Finding a trustworthy breeder of Deer-Head Chihuahua puppies is a challenging job. There are almost no reliable breeders that offer Deer-Head Chihuahuas under this term mostly because this division isn’t a part of the breed standard.

High-quality Chihuahua breeders will state on their website that they breed dogs that comply with the breed standards set by dog organizations like the AKC and the UKC.

Since this isn’t an official division between the two types of Chihuahuas, and the apple-head, better to say, a puppy with a rounded head, is considered a part of the standard, deer-head pups seem to be disqualified from conformation and any other dog show, and also official representation of this breed as standard, although they are purebred dogs.

Of course, this doesn’t mean that there are no deer-head chihuahua puppies for sale, but rarely does any breeder decide to be represented that way.

This is why the majority of dog owners who want to own this type of Chi have to contact almost every breeder individually or go through their website to check which types of pups they sell.

How Much Does A Deer-Head Chihuahua Cost?

Essentially, deer-head Chis aren’t that expensive as they usually cost between $500 and $1200, depending on the breeder, location, and other factors.

These pups might be found in animal shelters for lower than $500 as shelters and adoption centers usually take just as much money as they need in order to cover the expenses.

On the other hand, you should beware of puppy mills and backyard breeders who might sell you a puppy that is considered purebred and up to the standard, but it is usually just a fraud to take money from a potential owner.

If you notice that the price of the pup is suspiciously low, there are high chances you’re dealing with a scammer.

How Long Do Deer-Head Chihuahuas Live?

Although these pups are considered different from apple-head Chis, they actually share plenty of traits, including their lifespan.

Chis usually live up to about fifteen years (twenty is a stretch, but there are certain cases as well). This range is the same for all types of Chis, no matter which way their head is shaped.

Of course, teacups and small Chihuahuas aren’t as sturdy as the standard ones, so they might be a bit more prone to certain health issues.

What Is The Average Weight Of A Deer-Head Chihuahua?

Chihuahuas are quite small but very vocal animals, which is why they’re so interesting to many people. However, it’s interesting to notice that the two “unofficial” types of Chis have a lot in common, but not their weight.

It is believed that deer-head Chihuahuas are heavier and bigger than apple-head pups as most Chihuahuas grow up to six pounds or less, while deer-heads grow up to twelve pounds, which is quite impressive for a Chi.

However, that also means that they’ll require bigger portions of dog food than the smaller versions, so it wouldn’t be a bad idea to contact your vet before you decide on the portion yourself.

Is A Deer-Head Chihuahua A Good Breed For First-Time Owners?

These pups can be raised by owners without prior experience with canines, although this isn’t highly recommendable by a great number of experts as Chihuahuas, in general, can be quite stubborn.

Chis often appear aggressive towards new people, which is why they might seem unfriendly, but all they need is to get to know you better so they can feel relaxed in your presence.

Deer-head Chihuahuas are the same – they will be great pets to those who know how to treat them well, and hostile to those they don’t feel comfortable around.

What Are The Advantages And Disadvantages Of Deer-Head Chihuahuas? 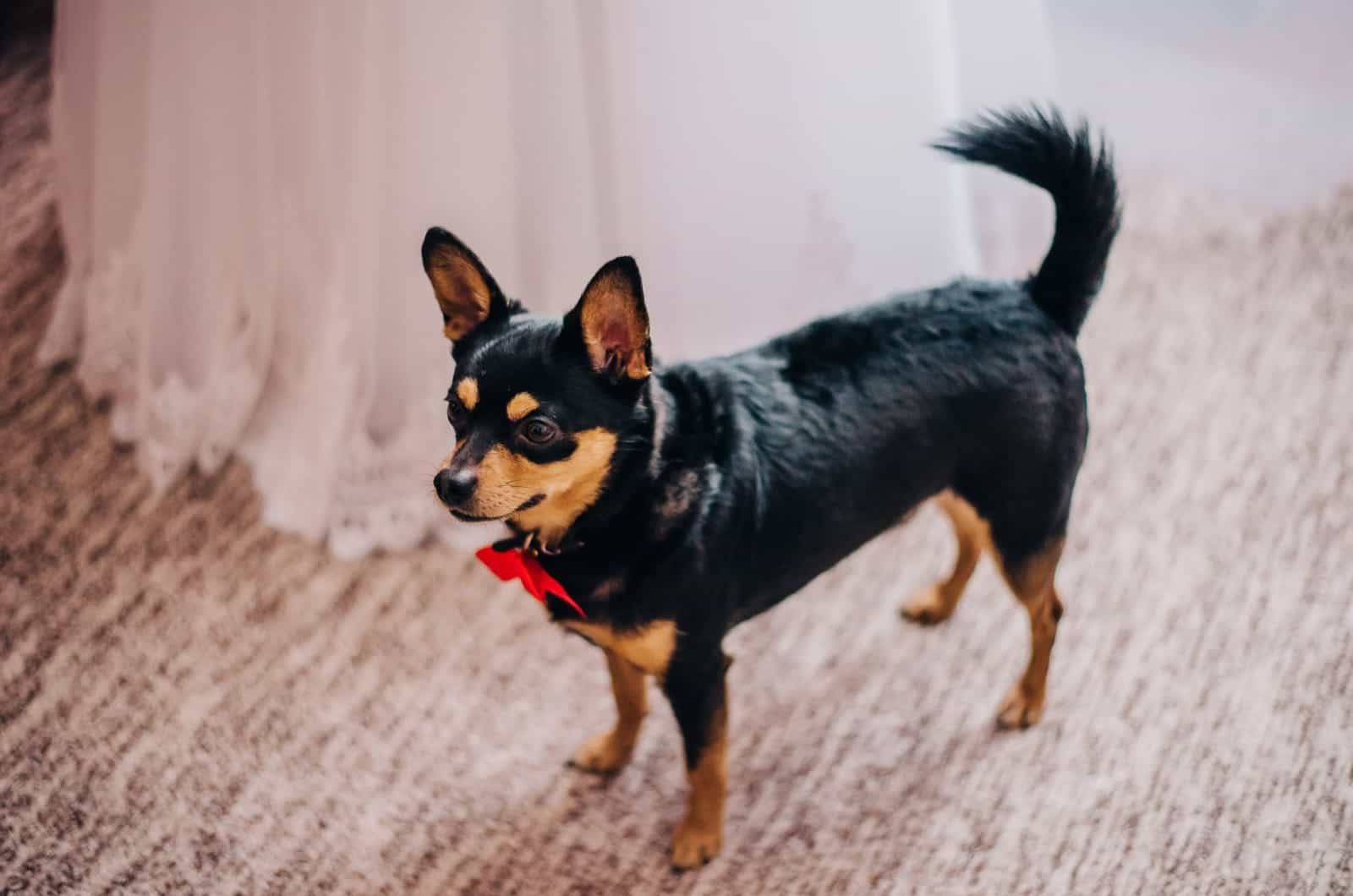 Deer-head Chihuahuas are generally considered to be just a subtype of Chis, which is why many people think that they have the same personality traits as the apple-head pups, but that might not be the case.

Deer-heads have their own set of attributes, which can be considered as both advantages and disadvantages.

• Completely devoted to their owner

• Don’t take up much room

The main reason for this is the fact that the division between apple-head and deer-head pups isn’t officially recognized. Some might even consider deer-head canines as “faulty” and improper, as the breed standard describes apple-head Chihuahuas as being the proper breed representatives.

However, deer-head Chihuahuas have a lot of qualities that they can offer to their owner, which is why they should be able to find a new home without any complications.

If you ever come across a deer-head Chihuahua, don’t hesitate to offer it a home full of love and attention as they do deserve it, just as much as other Chihus.

Merle Chihuahua – Are They Real Chihuahuas? What You Need To Know

Male Vs. Female Chihuahua: How To Choose Your Perfect Pet

White Chihuahua: An Angel Among All Chihuahuas

9 Greatest Chihuahua Breeders In The UK