So, you got yourself a Belgian Malinois, and you’re struggling to think of a good name for it. Or, perhaps you’re thinking of getting one, and you want to have a few good names picked out and ready for when you bring your pup home.

Either way, this is the place to find the perfect name! And, even if none of these names take your fancy, they’re sure to inspire you to find a great name that’s right for your furry friend.

If you’re ready, let’s look at the ultimate list of Belgian Malinois names! 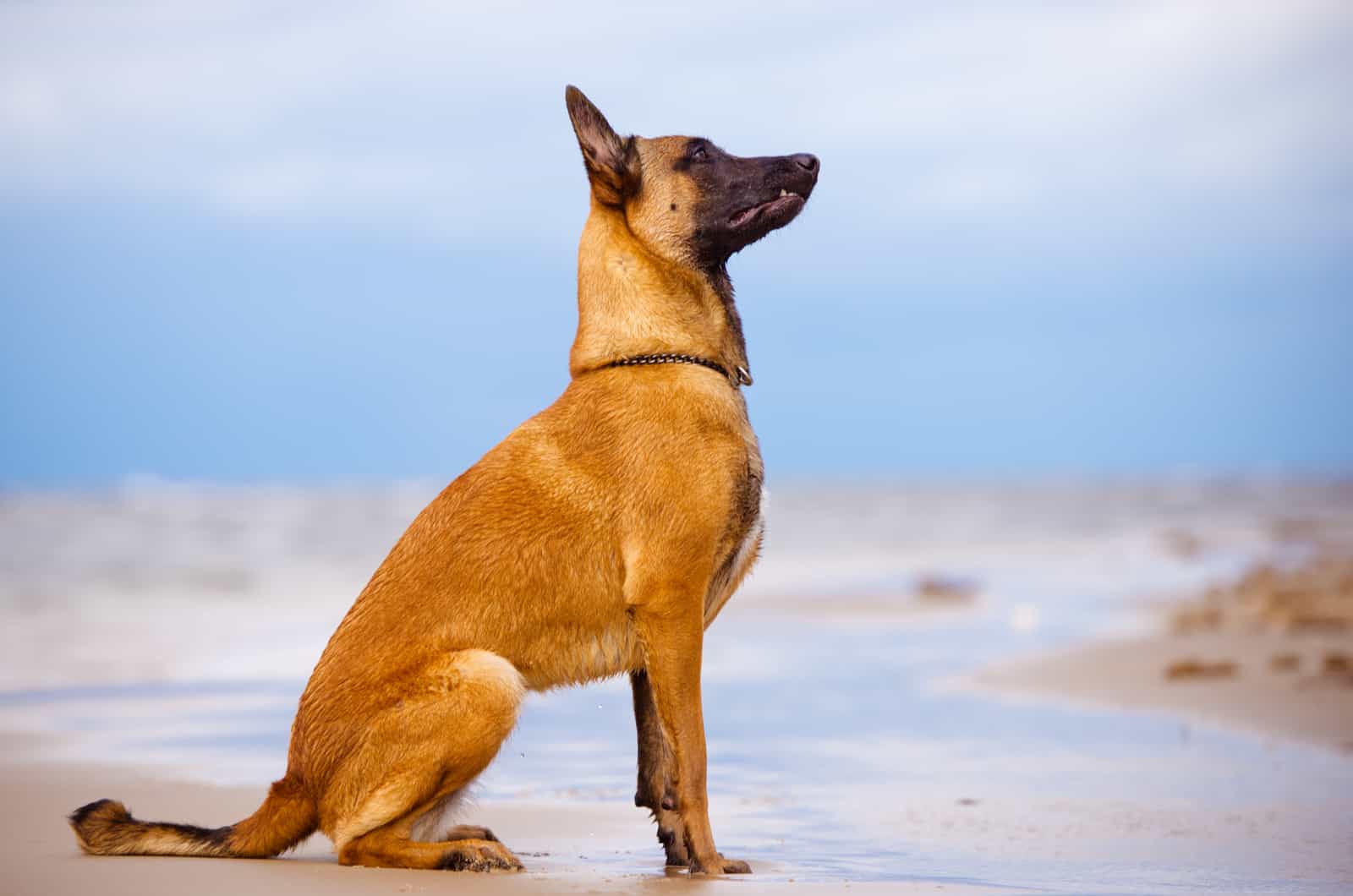 Do you need a good name for a girl dog? Something that sounds feminine and sophisticated?

We’ve put together a few excellent names for you to browse through:

No, they’re not in alphabetical order because that’s dull. Also, scrambling them actually makes each one stand out more, and it stimulates the brain to try and make sense of the order, meaning that you’ll be more likely to remember them and make connections to other possible names. 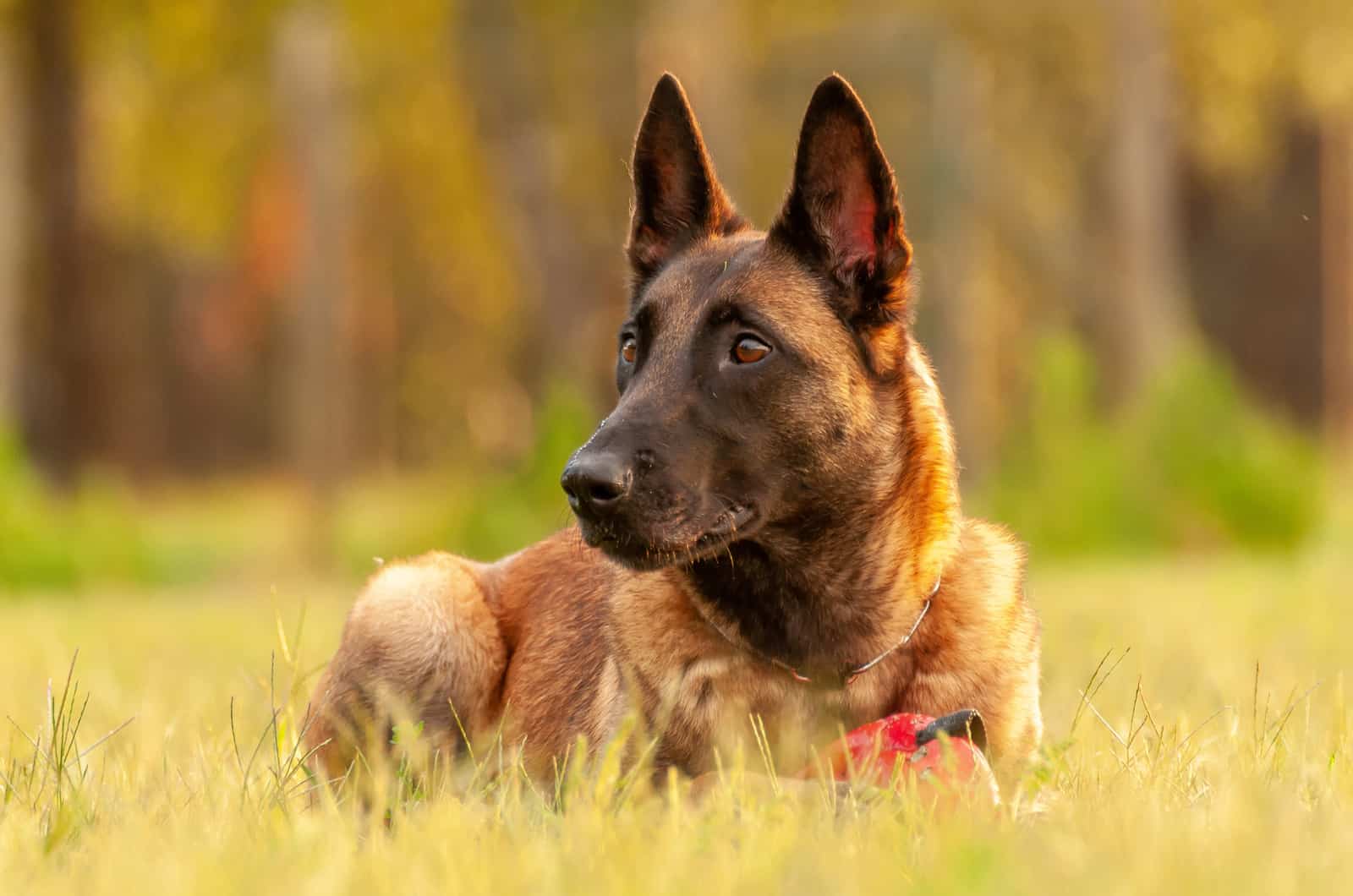 What about dog name ideas for male Belgian Malinois? They need to have a masculine ring to them; something robust and solid. Well, how about one of these?

That’s quite a good mix if we say so ourselves! Some names seem to suit any pet dog. Others may be better suited to a Rottweiler, but wouldn’t work for a Spaniel. Picking the right name should be fun, but you need to think about it. You’ll be using this name for a while. It has to be something you’re comfortable with, and it’s wise to avoid anything that sounds too similar to command words.

Also, anything longer than three syllables isn’t a good idea! Short, snappy, and simple is best, but you can get away with longer names as long as they are easy to say.

Two-syllable names work best, and it’s good to end on a vowel. If you have other pets, it’s always better to avoid using similar names, as it will cause confusion. 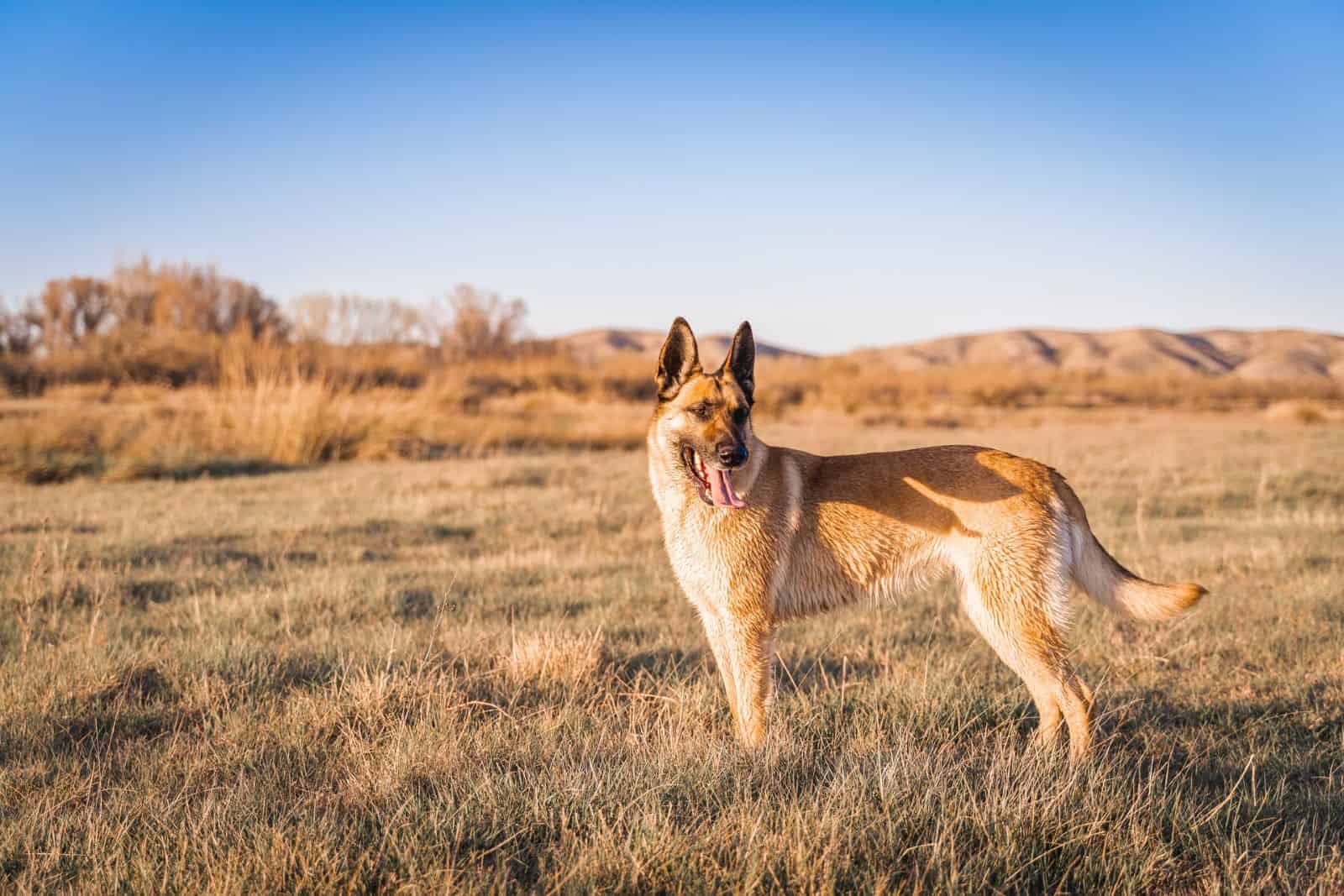 Looking for something a bit different? Do you want your dog’s name to stand out among others? Then, take a look at these! We’ve separated them into girl and boy names to help you out a bit.

You’re not likely to come across many of these while you’re out and about. Your fur baby is already one in a million, but having a unique name makes them all the more special. Although we split them into male and female, some will be suitable for either, but you already figured that out, didn’t you? Anyway, on to the next category! 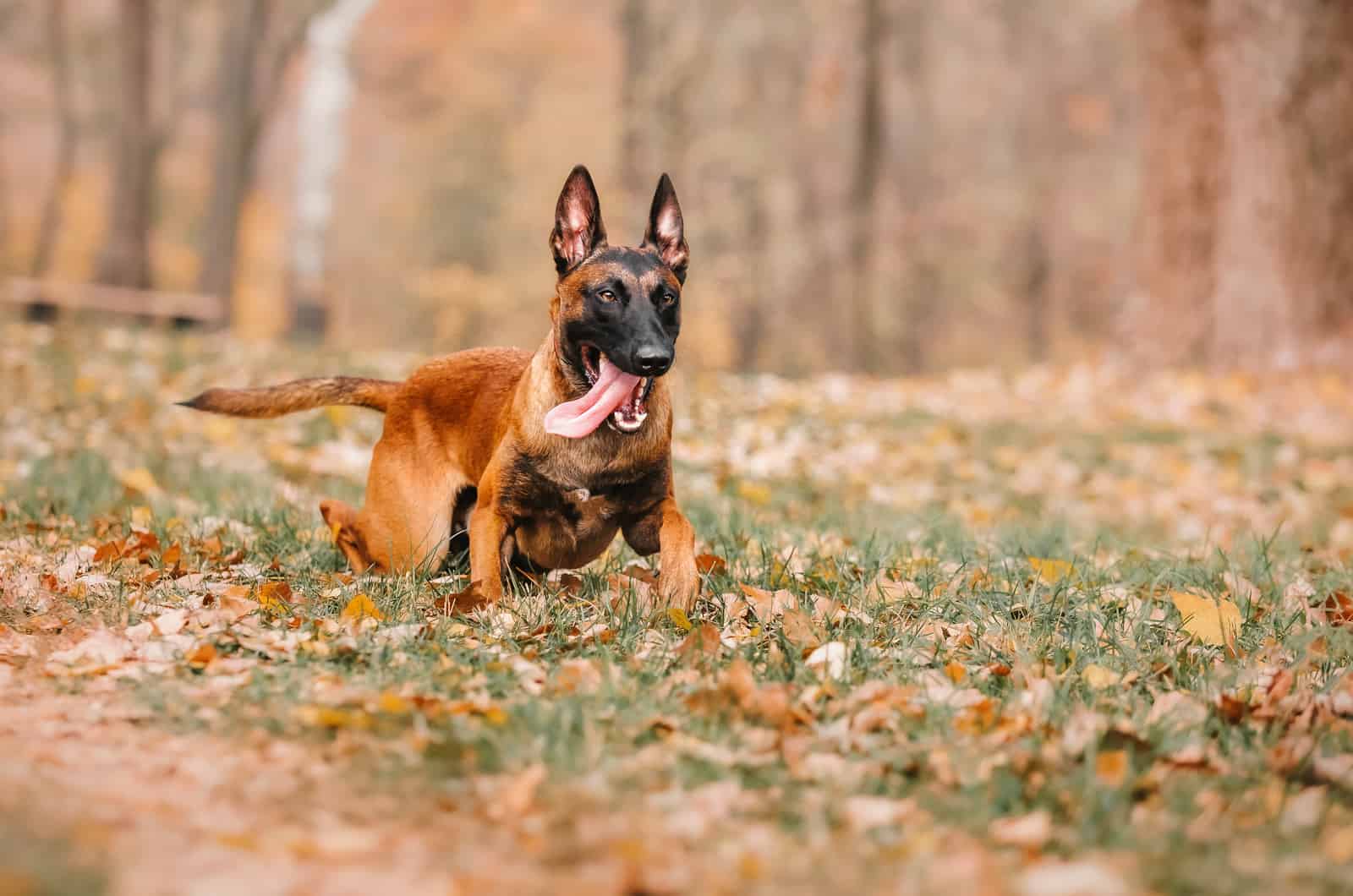 Whether your pooch is a girl or a boy, you might want some badass dog names to choose from. Maybe your Mal is spunky and feisty, and they need a name to match. If so, here’s our selection for you to try on for size:

You might have spotted that we broke our own rule here: Armageddon is longer than three syllables! Even so, you can always use longer names for official use (because it looks cool on forms and certificates!) and use a nickname for your pooch, like Geddy. 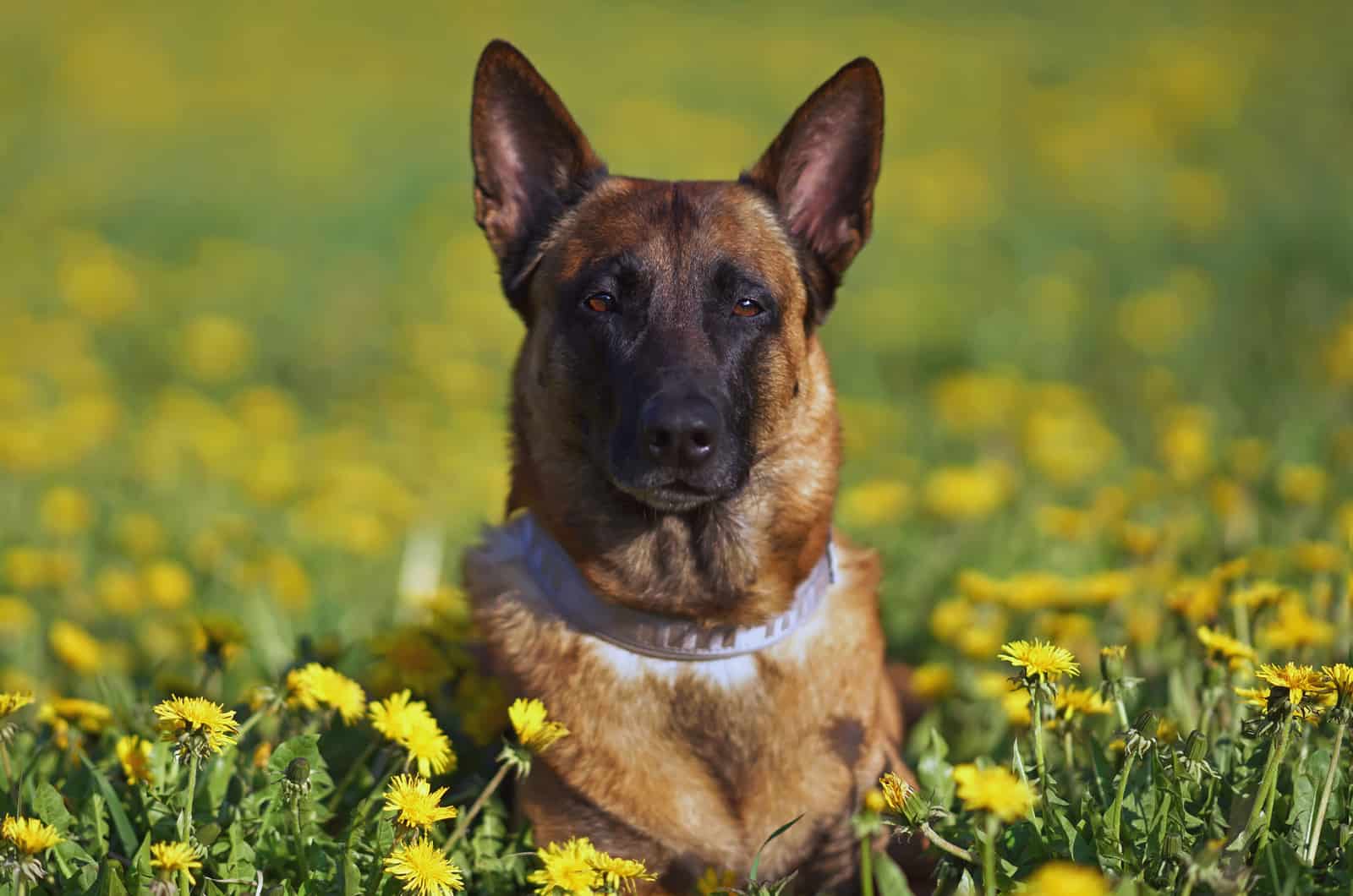 If you’re after something with a military connection, take a look at these names to see if there are any that you like.

The Mal is an amazing working dog that has proved its worth in police work, search and rescue, and military roles. The Belgian Malinois is favored for its work with the military, rivaling the other top dogs such as the German Shepherd, the Golden Retriever, and the Dobermann.

It is a loyal, fearless, extremely intelligent breed, and faithful to the end. If the Belgian Malinois had a motto, it would surely be Semper Fidelis.

You might even be interested in patriotic dog names – very fitting for such a powerful guard dog. 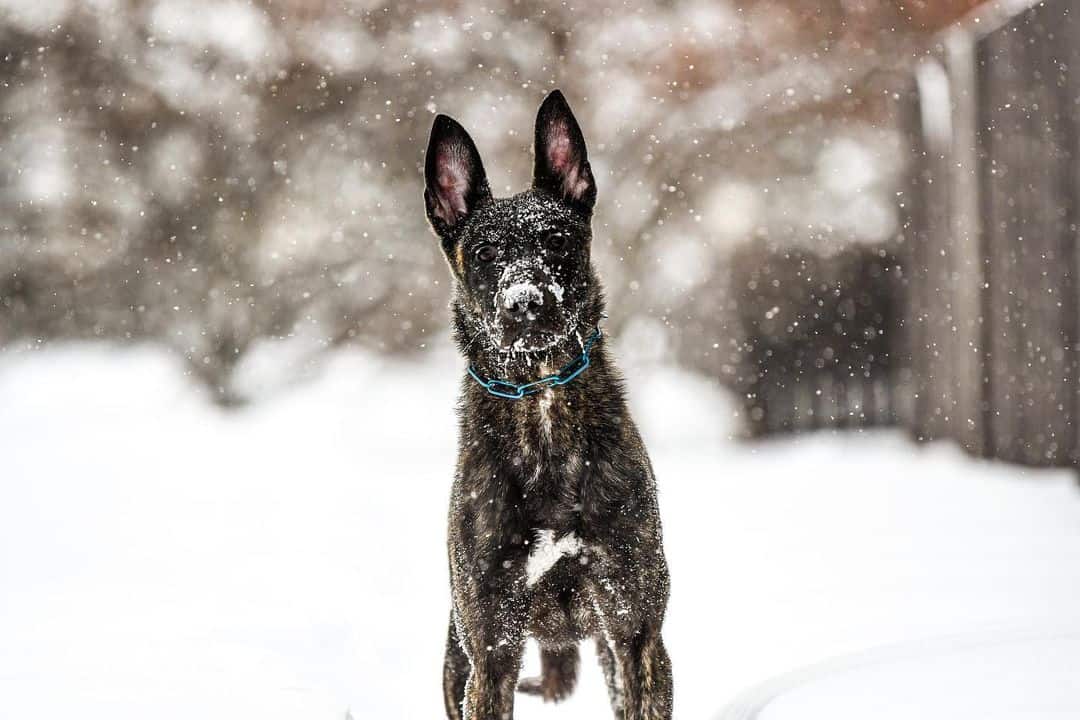 Tough-guy names aren’t for everyone, and they might not suit your sweet-natured pooch. So, here are a few ideas for cute names for your adorable Belgian Malinois puppy:

Some of these are great for girls, others are better for boys, and some can be for both! Take a little while to get a feel for your pup’s character and see which name fits it best. You might want to pick a name that reflects its color (with a bit of poetic license, of course!), or that highlights some quirk in its nature. Whatever it is, make the name a special one. It’s for life, after all! 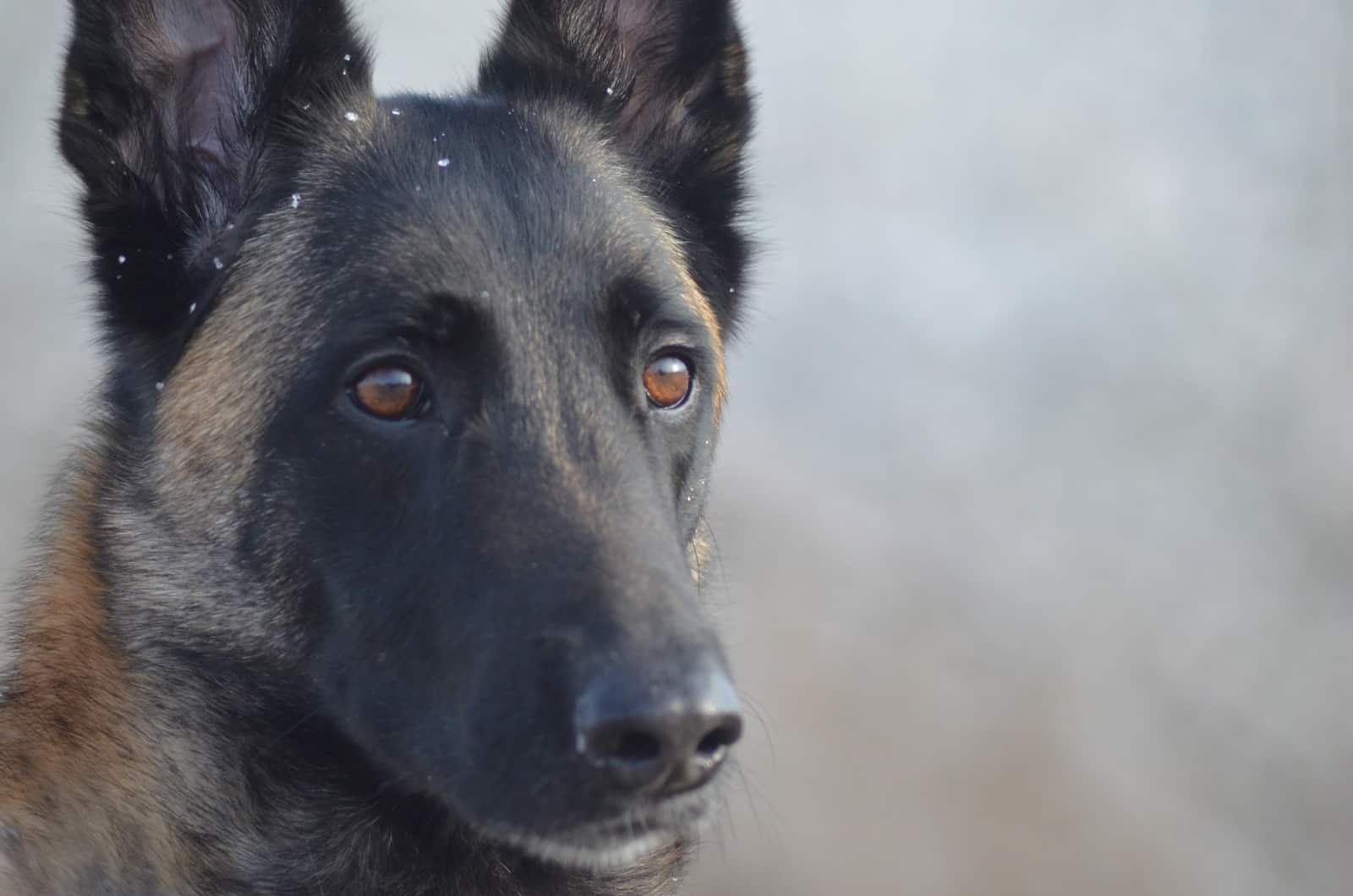 Perhaps you’re looking for a name that will impress people who hear you say it. To be fair, many of the ones we mentioned above fit that bill, but we’ve added a few more seriously cool names for you to check out:

Yes, the male and female names are mixed up here again. We can’t do all the work, you know! But, you have to agree, these are some very cool names. 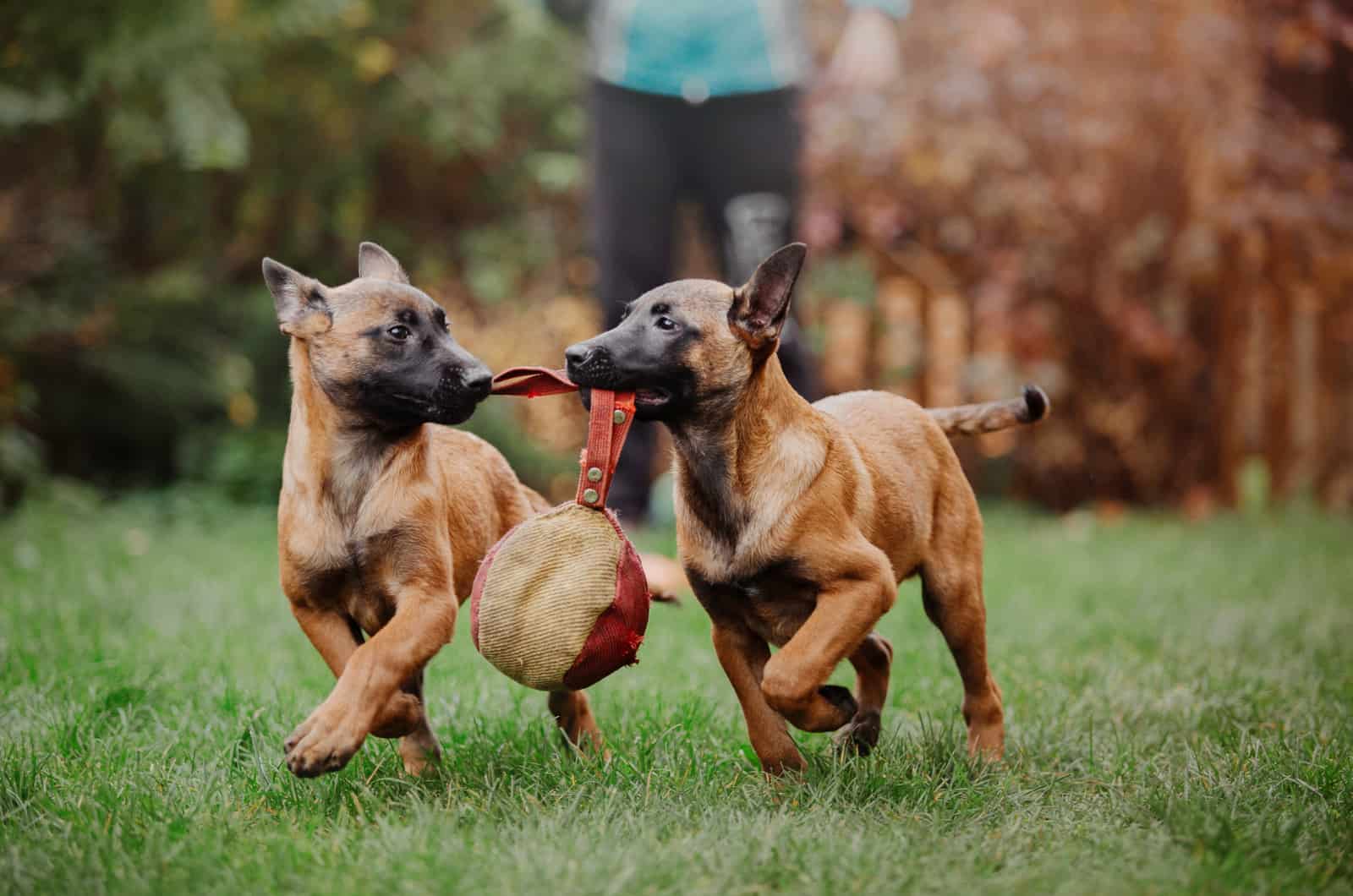 You’ve got a shiny new pup that has melted your heart, and you need a name… that’s great. We’ll make a list of possible names to suit your fur baby. BUT… it isn’t a good idea to name your pup based on the fact that it is, well, a pup! That tiny, cute bundle of fur and mischief isn’t going to stay that size for very long. You need to think ahead to when it is fully grown. Will the name still suit your puppy then?

Maybe so. However, naming a dog needs careful consideration. You need to take some time to think of one that will be easy to say; something you’ll be comfortable calling out across the dog park or in the back yard. Imagine your neighbor’s faces as you holler, Jehoshaphat! Here boy! or, Mustardseed! Come on, girl!

If you do go for biblical or Shakespearean names, choose wisely!

Anyway, as promised, here are a few suggestions for puppy names:

Imagine your tiny pup gazing up at you with those adorable eyes, head cocked on one side, and ears flicking back and forth as it listens to the sound of your voice as you call out one of these names. It will learn very soon that the sound you are making means something. The tone you use is important, as this will tell them whether you are calm and happy or stressed and angry.

However, it won’t actually know that this word is its name; it will simply associate the sound with several possible events or actions.

This is why choosing a good name is so important, especially during dog training. Having a strong, clear name makes it more likely that your pooch will learn it quickly. And, it helps that the Mal is so intelligent!

A Bit About The Belgian Malinois 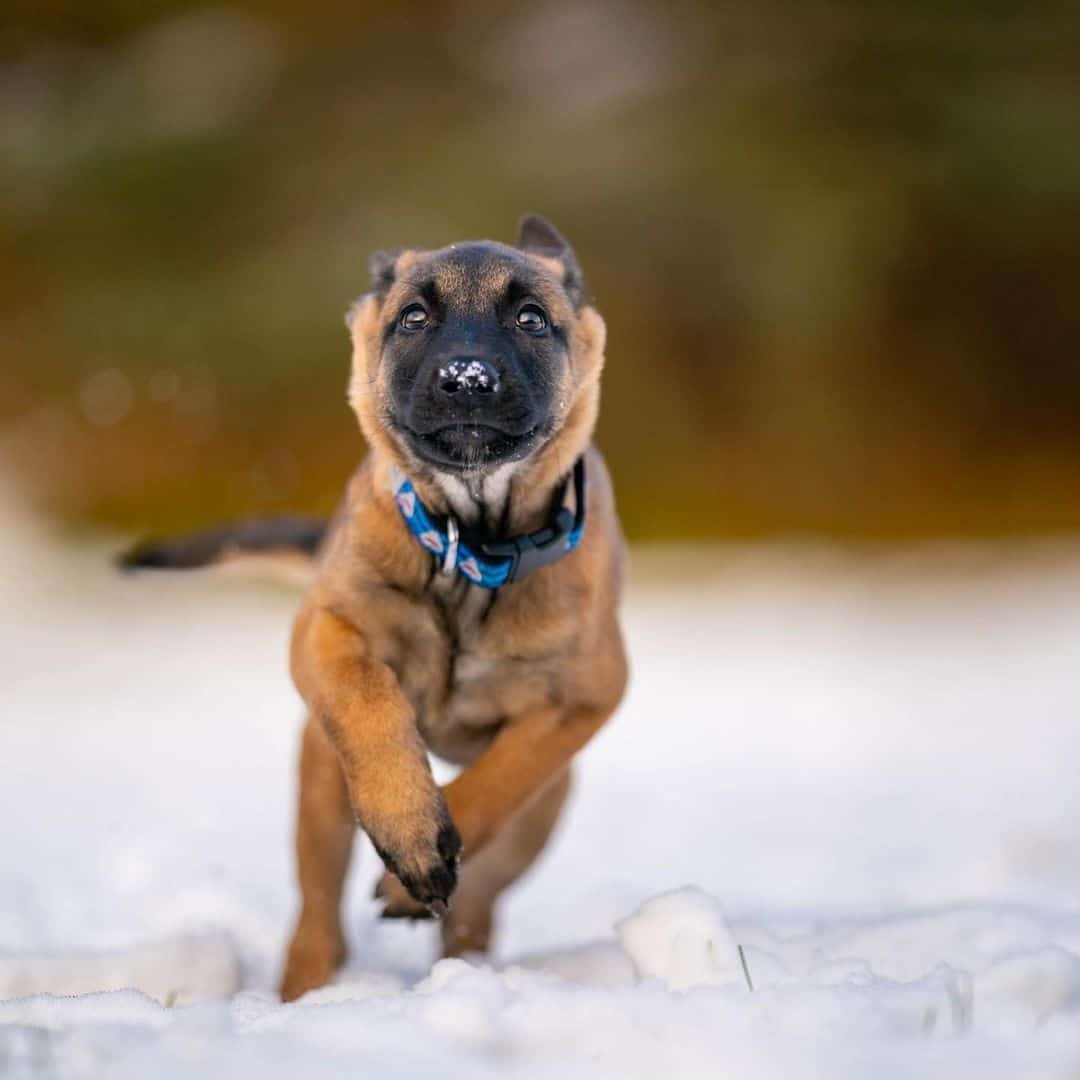 We’ve looked at the best Belgian Malinois dog names, but what do we know about the breed?

There’s a clue in their name, which tells us that they come from Belgium, more specifically, the town of Malines. It’s also known as the Belgian Shepherd Dog or the Chien de Berger Belge.

Often confused for a small German Shepherd, this beautiful herding dog has the same wolf-like appearance. In some countries, the Mal is classified along with the Laekenois, the Tervuren, and the Groenendael, all herding dogs from Belgium. Together, these four breeds are referred to as the Belgian Sheepdog.

However, the American Kennel Club (AKC) recognized the Mal as a separate breed in 1959, and since that time, the breed has become more popular. They quickly established a reputation for being super-smart, and they have become highly valued as police dogs, search and rescue dogs, guard dogs, and guide dogs.

It’s no wonder why dog lovers want them as pets!

Another plus is that they are one of the healthier dog breeds. Even so, you should only buy from a reputable breeder to ensure that your pup is as healthy as possible.

You often see these dogs with a fawn coat, but there are five standard colors and seven non-standard, according to the American Kennel Club:

All of these colors will be accompanied by the distinctive black mask around the muzzle.

The Mal’s waterproof coat is short and smooth, shedding twice a year. It’s pretty easy to take care of, only needing occasional brushing.

The main thing to keep in mind is that the Belgian Malinois is an active, highly energetic, intelligent dog. You will need to commit to regular daily exercise sessions. A short walk every day will not be enough! This dog needs to run and play, and it loves to have a job to do. If you’re a jogger or a hiker, then this is the perfect companion.

Without the right amount of mental stimulation and plenty of exercise, the Mal will become unhappy, unhealthy, and destructive.

As well as exercise and mental stimulation, a good diet of top-quality dog food will ensure that your furry pal stays fit and healthy for many years to come.

And, that’s the Belgian Malinois in a nutshell. 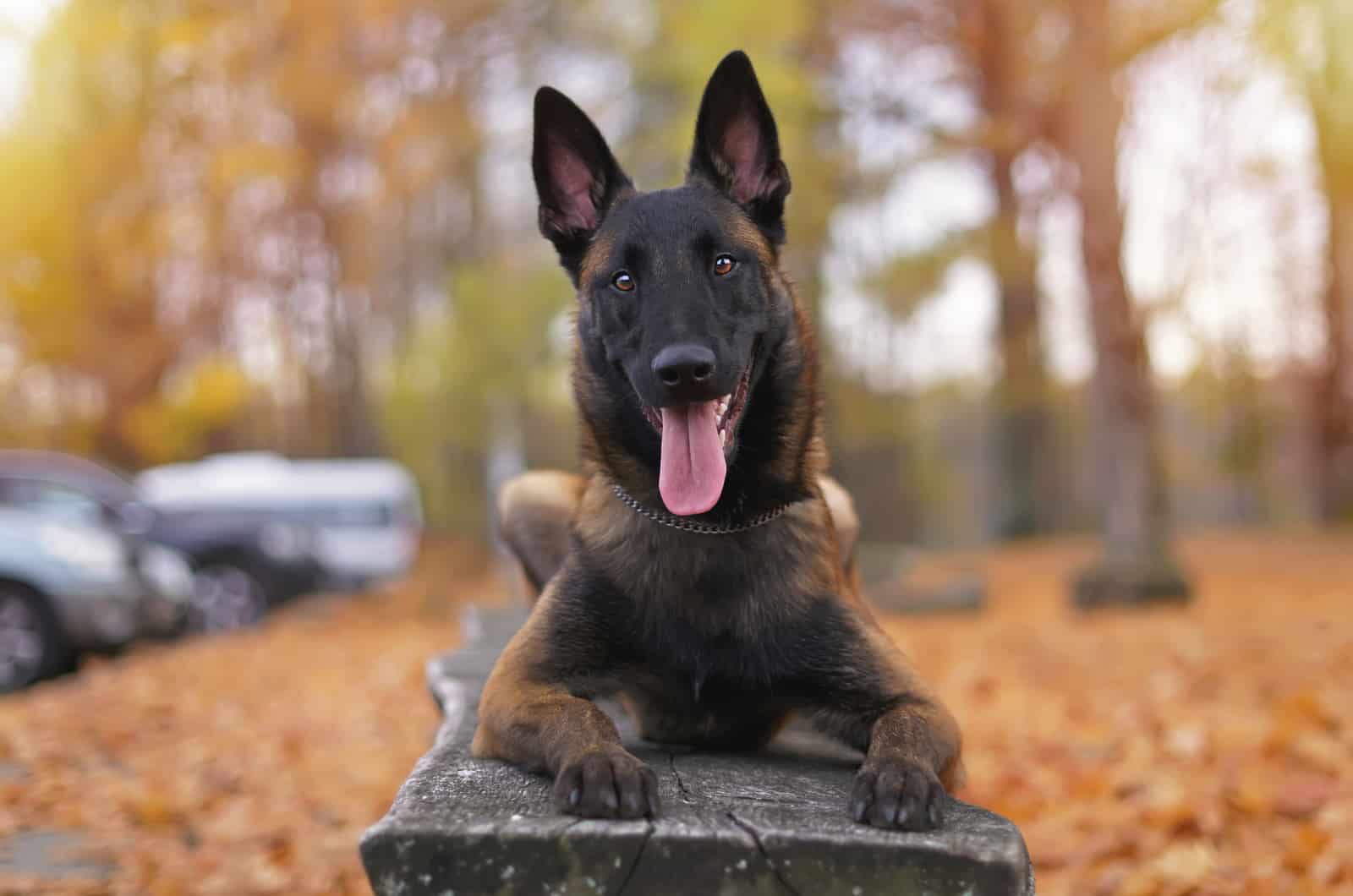 You’ve been through the list and seen what’s to offer, and now you need to pick a name.

So, how did we do? Well, it’s going to go one of two ways: you either loved our list and found what you were looking for, or you said meh.

If it was the latter, then…

Really? None of these ones work for you? Oh well, you can’t say that we didn’t try!

Seriously, though, why not come up with your own?

Think of your favorite books, movies, or TV series. They all have main characters, heroes, villains, pets, or something that will inspire you. There are literally thousands of names out there that you could pick!

However, if you found a great name here, then good for you!

To round things up, here are some tips and reminders about the rules of naming your dog:

• A two-syllable name is best. Keep it short and sweet if possible.

• Long names will become tedious to say and difficult for the dog to learn.

• Ending on a vowel is a good idea.

• Pick a name that you love and won’t get sick of saying.

• You can change the name as long as you do it within a couple of weeks of getting your pup.

• A rescue dog (especially an older one) may already have a name that it’s used to, and it can be a difficult process, but it’s good to rename a dog that has been mistreated in the past. Some shelters rename their dogs if there is nothing to advise them what they are called. You should always rename them by using positive reinforcement.

• Take your time to pick a good name, but try to settle on a permanent one within two months.

• Avoid names that sound like commands, like ‘no’, or ‘stay’. This is just confusing for your dog!

• The dog’s name is a cue that something is going to happen. They don’t really know that they have a name, just that when they hear the word, they know that something follows such as a walk, petting, a treat, or dinner time!

There you have it. We’ve given you a list of names and some tips about naming your precious pooch.

Now, all you have to do is pick one and try it out on your pup.