Labrador Retrievers were born to fetch things. Just look at what Robbie, the Black Lab, retrieved the other day!

Robbie is a friendly dog. He has two dog buddies he loves to pieces. When he saw Rusty and Bullet drifting away in a canoe, all Robbie’s alarms went off. He knew exactly what he needed to do. After all, he IS a retriever.

The brave dog jumped into the water after them and paddled until he reached the canoe. But, Robbie wasn’t the only smart cookie in this story. His friend, Rusty, thought of grabbing the rope and throwing it over to Robbie, so he could pull them to the shore.

The crowd on the dryland recorded the rescue action. The caption in the video says the canoe was blown in the water because it’s lightweight. The two dogs jumped into it as it was drifting away, but didn’t realize their mistake until it was too late. 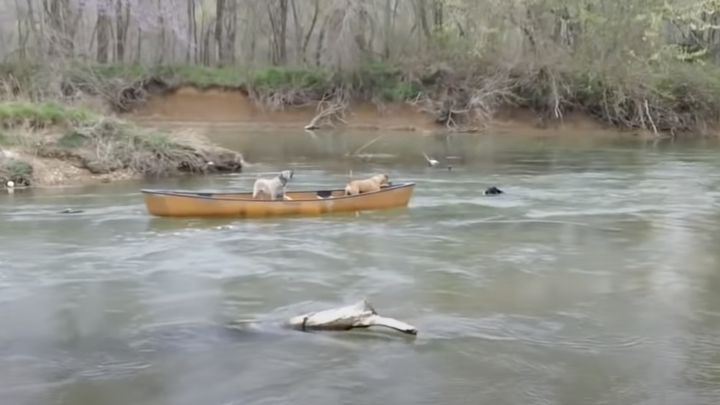 They were trapped. They were barking for help. And, Robbie heard them.

Rusty kept his calm and threw Robbie the rope while Bullet was barking the whole time.

Robbie managed to pull the canoe out, and soon, all three dogs were safe. Everyone was proud of Robbie’s courageous action. Still, the whole situation wasn’t what everyone thought it was: a rescue mission.

In fact, this was a stunt done many times before. All three dogs once accidentally participated in the same rescue mission, and they’ve been having fun ever since. Besides, all three dogs are excellent swimmers and nothing really could’ve happened to them.

“Robbie actually taught us he could retrieve the canoe,” Robbie’s mom said. “The dogs were in no danger. They all grew up on the river from the time they were just a couple months old. Robbie, the Black Lab, has the strongest legs I’ve ever seen on a dog… Our dogs would swim an entire 11-mile float trip.”

Robbie’s dog mom is really proud of her pupper as well as Rusty. As for Bullet, he’s just vocal and loves having his voice heard. All three of them are some cuckoo dogs.

You can watch one of their rescue actions, or the best game ever, as the dogs refer to it, here!