It was early October, and Hurricane Delta was threatening to come dangerously close to Cancún, Mexico. A man named Ricardo Pimentel was left with few options, and what little time he had was already slipping through his fingers.

Dogs had to be saved.

Ricardo is in charge of Tierra de Animales, an animal sanctuary just outside Cancún. For over nine years, Ricardo has taken care of over 500 animals, including dogs, stray cats, chickens, horses, turkeys, sheep, pigs, cows, and donkeys.

The shelter was big, but nothing was strong enough to endure during the Category 4 hurricane. So, what does this animal lover do? He invites all the animals inside his house for a sleepover!

“We have two bedrooms, one kitchen, and one bathroom available for volunteers who want to come and stay here to help us with all the things that we have to do,” Pimentel said. “We decided to put almost all the dogs inside the house, simply because we don’t fully trust in the shelters that we currently have because they aren’t hurricane-proof.” 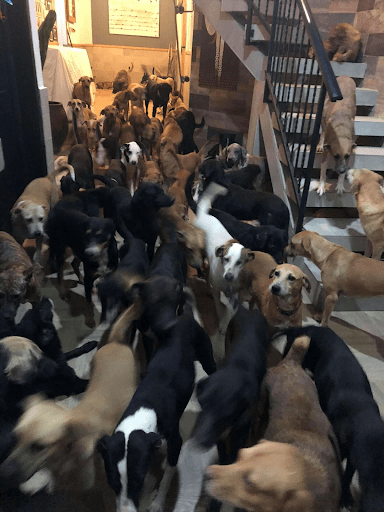 Bringing 300 dogs inside wasn’t an easy task. It took five hours for Pimentel and his volunteers to get all the animals inside. Two by two, taken on a leash, dogs entered the house. Some pups had to be carried inside because they didn’t know how to walk on a leash.

“We had to bring them in on leash two by two,” Pimentel said. “Some of them were afraid or didn’t know how to walk on a leash, so we had to carry them to the house, but in the end, it was worth it because they are all safe.” 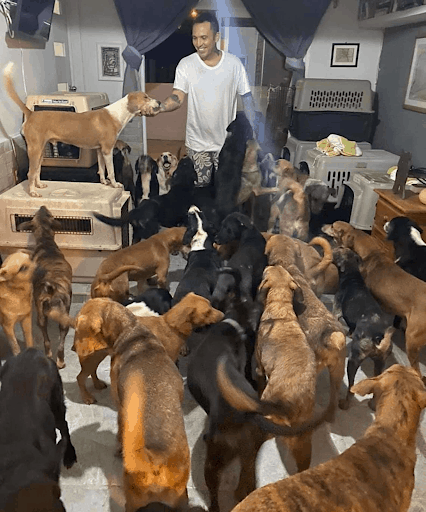 Ricardo’s house isn’t that small, but any house is small for 300 dogs. Luckily, they didn’t make as much of a mess as you’d expect them to. Everyone seemed to get along just fine.

It seemed as the dogs knew there’s a common enemy threatening everyone. They stayed calm, patiently waiting for the storm to end.

The trouble united everyone.

“They were actually very well-behaved all night,” he said.

By the time the hurricane reached the sanctuary, it had become a Category 2 storm. Still, the wind did damage the property.

“The next morning when the hurricane finished, we had to do a lot of repairs and clean all [the animals’] areas from trees and branches,” Pimentel said. “So they stayed in the house the next day until 5 or 6 p.m.”

“Of course, there was a horrible smell in the house, and they broke a few things, but there’s nothing to regret,” he added. “I would do it again one million more times if necessary.” 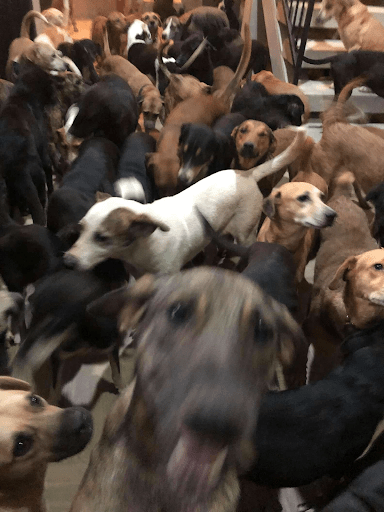 Pimentel is now rebuilding the sanctuary, hoping he’ll make it hurricane-proof. His ten acres of shelter offers a second chance to all stray animals who need help.

One dog saved at a time will make a difference.